Ever wonder where coconut milk comes from? Here is everything you need to know about coconut milk, how it's made, and its different kinds. We included its nutritional facts along with some incredible facts that you probably didn't know.

Everybody is obsessed with coconut milk. Just like soy milk and oat milk have exploded in popularity over the past decade, coconut milk is really wonderful alternative to dairy options. Nobody really needs any convincing in loving coconut flavor, but I was curious about what actually is going on in those coconuts! If you’re curious about a really wonderful alternative milk option, read on my friends!

Turns out, most of us are completely wrong about where coconuts come from, how coconut milk is made (no, it doesn’t just drain out of a cracked coconut), and all the other wonderful goodies that can be made from coconut milk!

So if you like yourself a pina colada…. and getting caught in the rain…

What is Coconut Milk?

Coconut milk is an extremely rich, creamy, sweet, and nutty flavored coconut-derived product. It doesn’t actually occur naturally, which is a common misconception. It’s actually made by taking mature coconut flesh, grating it, and mixing it with water until it reaches a milky texture. 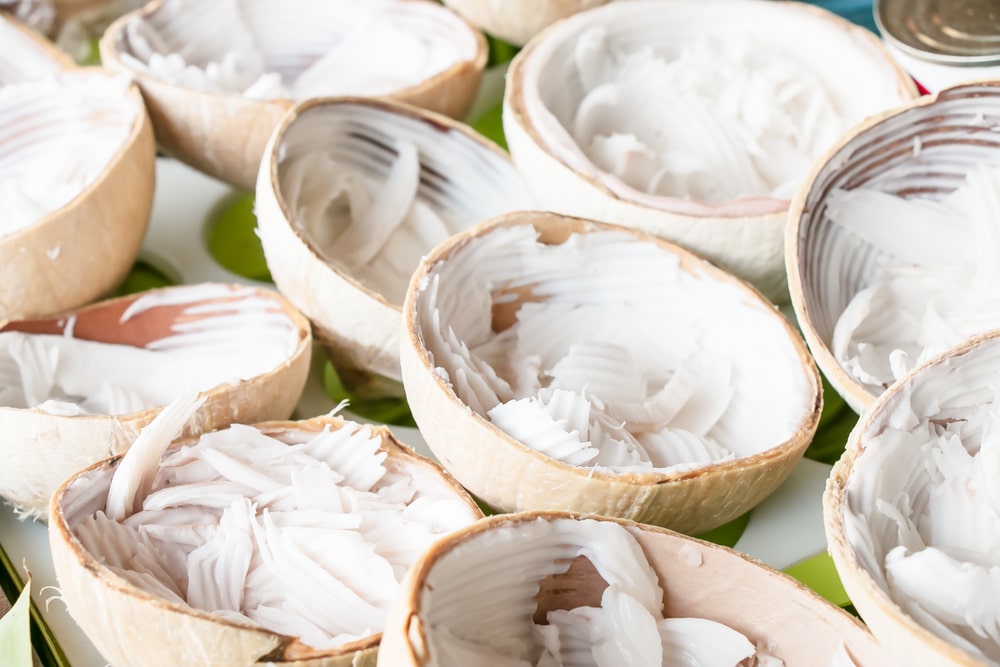 Where Does Coconut Milk Come From?

Coconuts grow from a variety of palm tree varieties, which are part of the Arecaceae family. Coconuts tend to grow in super tropical and remote regions, which are then transported to other countries for them to be processed into many different coconut-derived products — which we will touch on later!

Since the places that coconuts are native to are so far away, there’s a good chance that people who live in Western nations have actually tasted truly fresh coconut milk. This is because once the coconut is cracked, the contents inside that are still unprocessed have a super short shelf life. If you want to have genuinely fresh coconut milk, you’ll have to go on vacation! 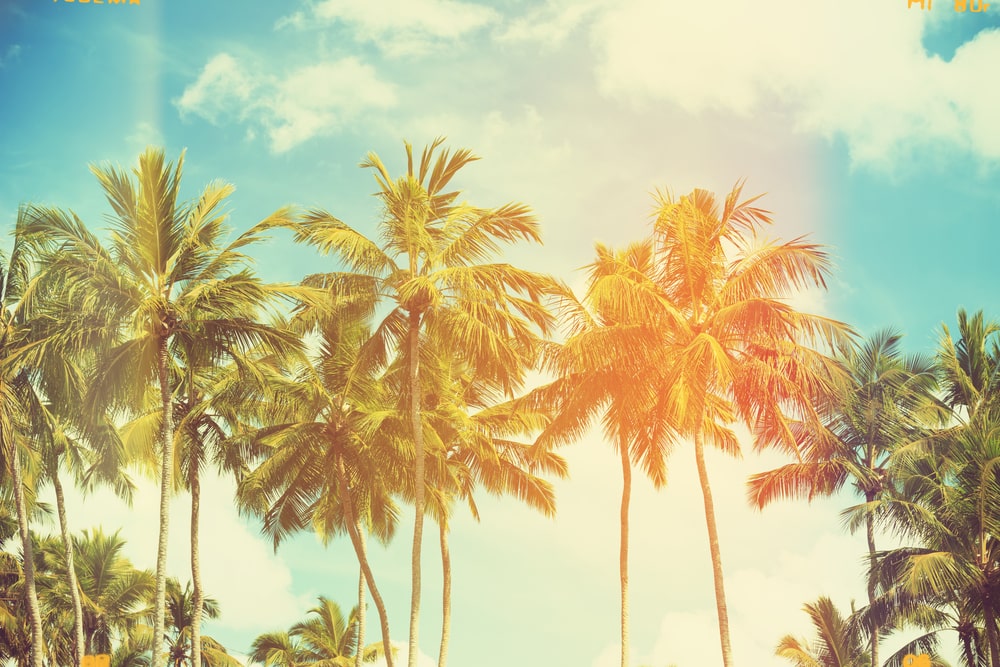 How is Coconut Milk Made?

The traditional way of making coconut milk is very simple. Take a mature coconut with nicely ripened flesh, and finely grate it. Then the shredded coconut is mixed with hot water to help suspend the fat in the coconut. Then the mixture is mixed with either plain water or coconut water to reach the desired consistency.

Another nifty way of making coconut milk is by using a method called gravity separation. Since coconut fruit is so high in oil content (which is mostly saturated fat), it functions the same way that water and oil eventually separate into distinct layers when mixed in the same vessel.

Gravity separation starts out the same way, by taking fruit from a mature coconut and grating it, but then letting it sit for up to an hour until the meat, coconut fat, and water have all separated into different layers.

To create coconut milk that has a lower fat content, the same process is applied, only the meat of the coconut that has already been drained is used again. This way, the majority of the fat content and other nutrients have already been squeezed out. 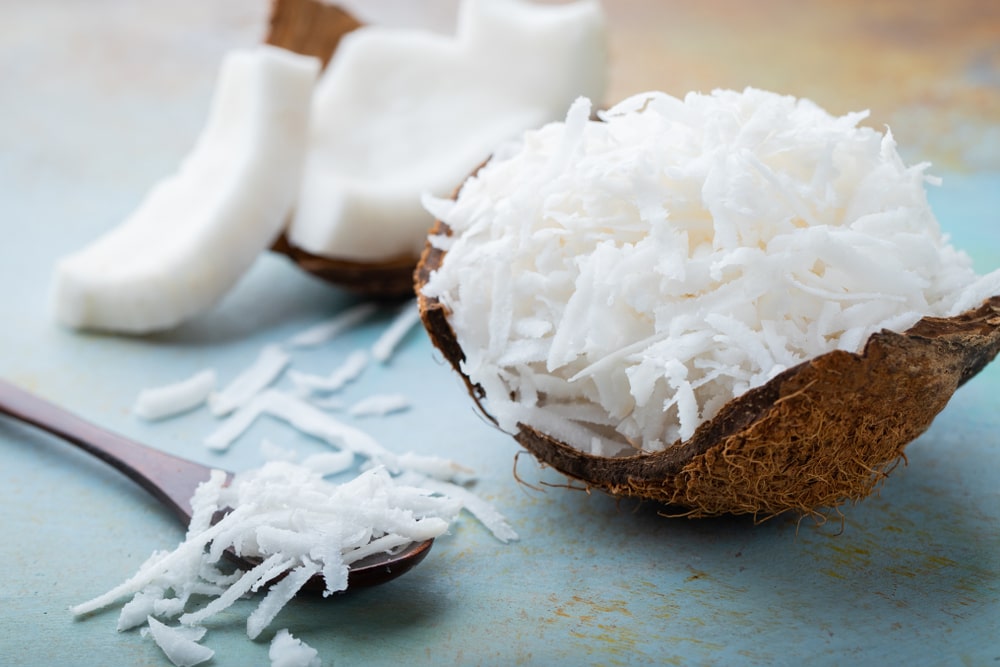 How Many Kinds of Coconut Milk are there?

Coconut milk can be divided into 8 different subtypes according to its thickness, which is determined by its fat content. The nutritional facts of coconut milk are taken from medium-fat coconut milk, but it is worth it to know the options of consistencies. 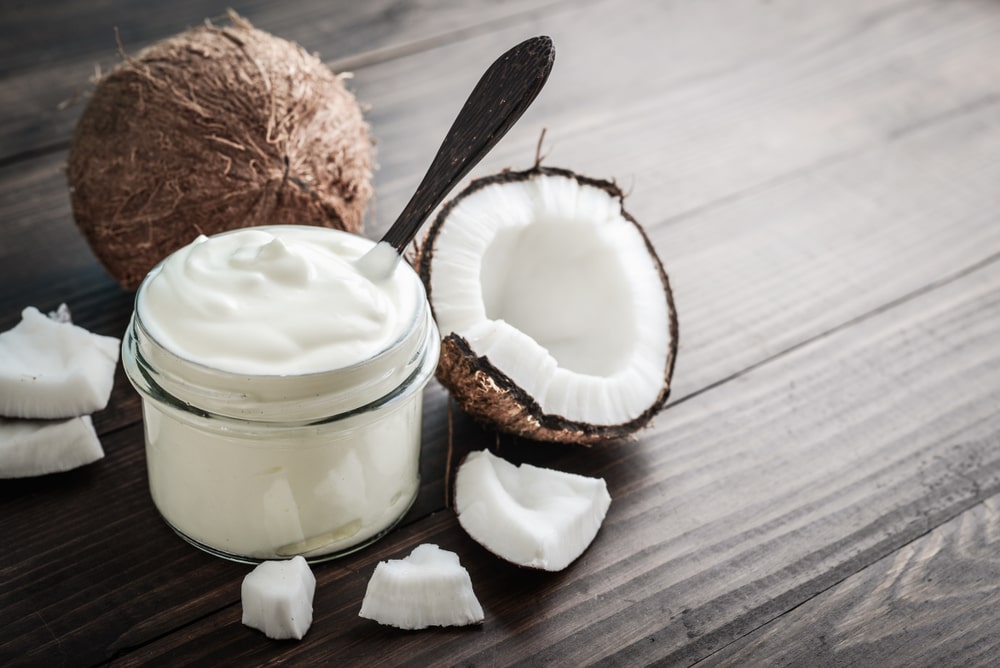 What Other Coconut Milk Derived Products are there?

You may have heard of coconut milk powder before, and wondered why this product is made. It’s a neat way to ensure that you always have coconut milk available in your pantry, without the risk of it spoiling. 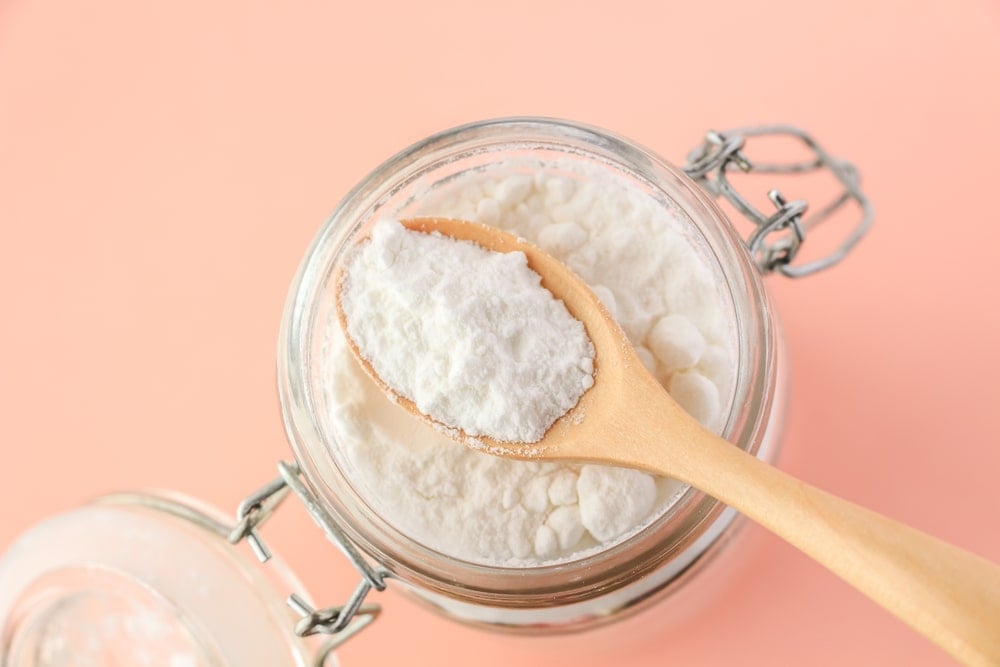 In the Philippines, they create something called latik which is made by reducing muscovado sugar and coconut milk!

This is a popular product made in southeast Asia and the Philippines, but their version is only made with coconut milk and sugar. Other countries that incorporate eggs into their mixture to create coconut jam are Vietnam, where it’s called banh gan, Thailand, where it’s referred to as sangkhaya, and Cambodia where coconut jam is translated to sankiah.

What are the Coconut Milk Nutrition Facts?

First and foremost, coconut milk is an extremely high-calorie food – with 93% calories from fat. It is up to debate whether or not coconut milk is the healthiest milk alternative, but the following information will help you to decide. 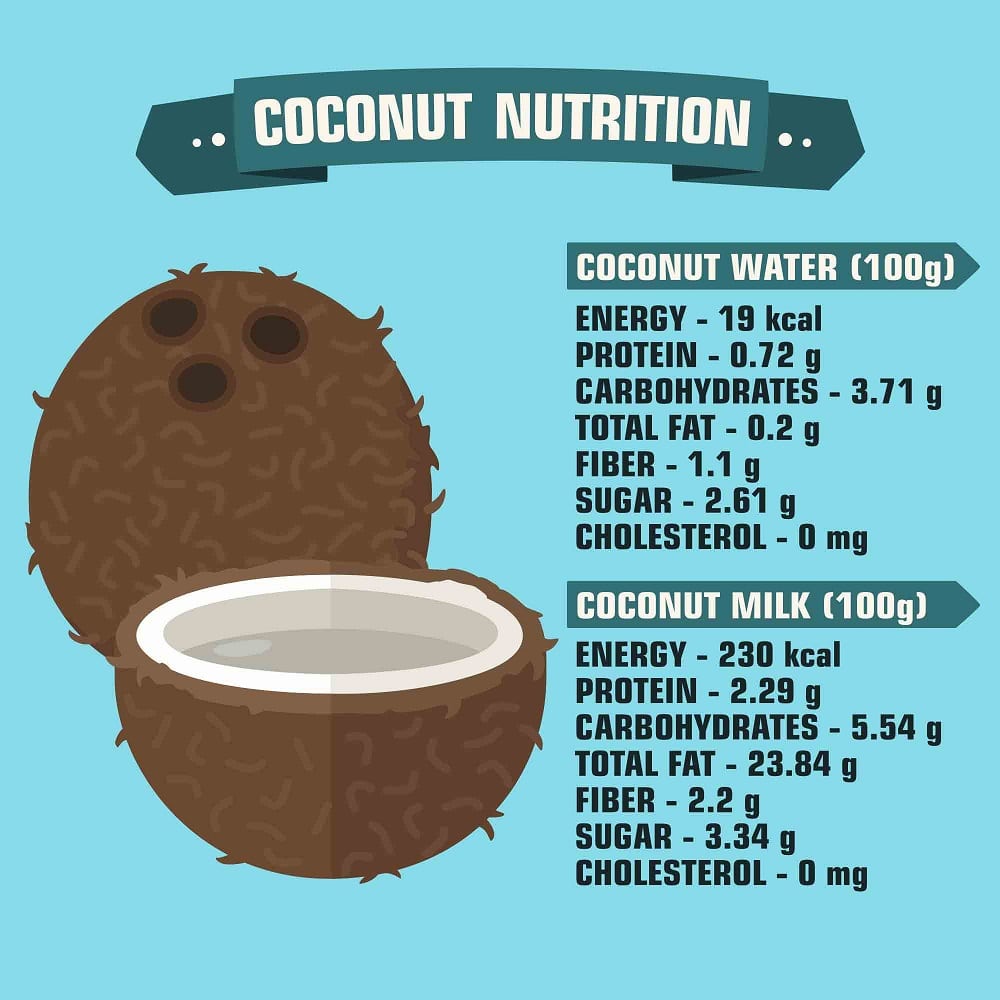 And the required daily intake (RDI) of the following vitamins and minerals are as follows:

What are the Health Benefits of Coconut Milk?

The following information has been sourced from Medical News Today who gets its information from a number of reliable researchers and experiments. Many of the experiments have been done on coconut oil, which is where many of the beneficial properties are found

Lauric acid is what makes up about 50% of coconut oil. It is classified as both a medium fatty acid chain and a long fatty acid chain. Why do we care? Because lauric acid helps reduce inflammation in the body and reduces the number of bacteria that cause infections. Not only in your gut, but in the bacteria that resides in your mouth too!

When lauric acid is in the body, it also encourages a process called apoptosis. This is the stimulation of certain kinds of receptor proteins that regulate the growth of cells. This is an extremely helpful property especially when it comes to uncontrolled cell growth – otherwise known as cancer cells.

Otherwise known as MCT’s, medium-chain fatty acids are beneficial when it comes to digestion. Two of them present in coconut milk are capris acid and caprylic acid. These MCTs travel straight from the digestion tract to the liver where they then contribute to the creation of energy, and won’t be sitting around as fat cells.

MCT’s apparently discourage a large appetite and instead encourages energy through thermogenesis (heat creation). This is great for the health of your gut biome, and not to mention for insulin sensitivity too! 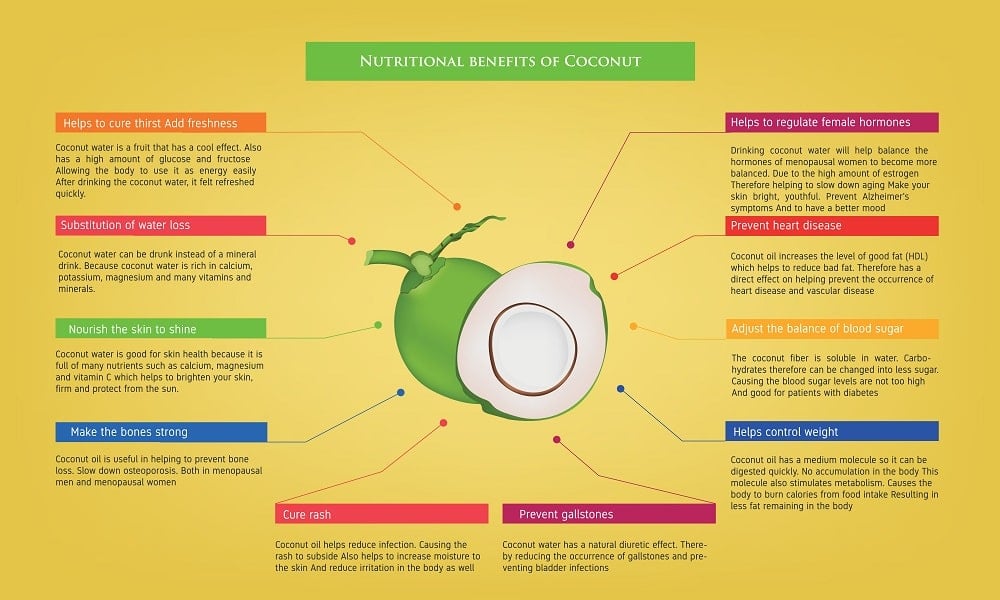 Because coconut products are so high in saturated fats, people doubt whether or not they are a good thing to incorporate into your diet when it comes to cholesterol and heart health. Maybe this study will help convince you:

A study done with 60 men over an 8 week period was testing to see how different kinds of milk affected their cholesterol levels. By the end of the study, it was found that raised the amounts of good cholesterol (HDL) in the body by 18% and lowered the bad cholesterol (LDL) by 3%!

What Kind of Coconut Milk Should I Buy?

The easiest way to determine the kind of coconut milk that is right for you is not by brand, but by the label. It’s always a good idea to buy products that are organic and all-natural. Not that much needs to be added to coconut milk – other than the assurance that it is properly sealed.

If you see a product that has a bunch of other additives, just stay away from it! Coconut milk is sweet enough and healthy enough all on its own.

Otherwise, be aware of bisphenol A (BPA). This is a chemical found in cans that can sometimes leach into the food inside if it stays there for too long or is subjected to extreme temperatures. Look for brands that don’t have BPA packaging.

So in conclusion, look for organic coconut milk that is simply unsweetened coconut milk and water, comes in a carton! Otherwise, purchase a coconut from the grocery store and make your own homemade coconut milk!

(Did you spill a buncha of coconut oil? Not to worry! We have a guide on how to get it outta the carpet!) 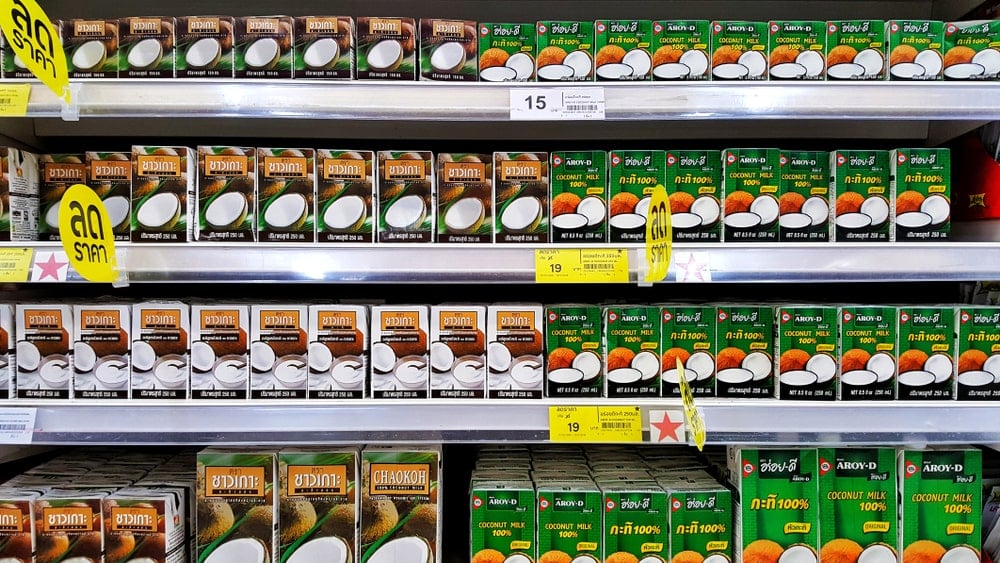 Are coconut milk and coconut cream the same thing?

Can coconut milk beverages be frozen?

Yes, it can. However, it won’t last as long as solid products. So it is best to use your frozen coconut milk within a month of placing it in the freezer.

Can coconut milk be whipped?

Yes, it can, it will be much easier if you have an electric whisk, however. If your coconut milk has a lot of preservatives or guar gum in it, it will not whisk well.

Can coconut milk be substituted for dairy milk?

In reference to baking with coconut milk, it can be substituted for cow’s milk if desired. However, it may not achieve the same consistency or flavor if you’re used to making a recipe with dairy milk. This is due to a different flavor, texture, and fat content,

Coconut milk can replace heavy cream if you’re looking for a dairy-free option, however, don’t expect the flavor or texture to be the same. They have different textures, fat contents, moisture contents, and cooking times.

Coconut milk is very rich and creamy, with a slightly sweet, tropical, and delicately nutty flavor.

Is coconut milk made in a factory?

Is coconut milk used in curry?

Traditionally in many south Asian cultures, coconut milk is used as a source of protein and as a way to offset super spicy flavors. Using coconut milk in curries is a wonderful thing to experiment with at home, and you’ll probably never go back once you’ve started.

Should coconut milk be used in smoothies?

Coconut milk adds a really lovely tropical flavor to smoothies and actually won’t curdle when combined with acidic fruits or vegetables like other dairy products can.

If you’ve encountered a coconut product that is solid, you’ve probably encountered coconut cream. This is still coconut milk, the main difference is that it has a much higher fat content than standard coconut milk will.

Which coconut milk is best for coffee?

Is coconut milk full of fat?

Will coconut milk thicken when it is heated?

Like any other liquid that is subjected to high heat, the moisture content is eventually going to evaporate. The same goes for coconut milk, it will thicken if it left on high heat for a while.

How many calories does a cup of coconut milk have?

552 calories. Coconut milk is a very high-calorie food, with 93% calories from fat.

How much protein is in a cup of coconut milk?

5 grams of protein is found in a cup of coconut milk.

How much sugar is in a cup of coconut milk?

There are 8 grams of sugar in the average cup of coconut milk.

What food group is coconut part of?

How long does coconut milk last in the fridge?

If unopened, a cardboard carton of coconut milk can last 3-4 weeks in the fridge. Once it’s been opened, it is best to consume it within 7-10 days. If your coconut milk comes in a can, it can last for an impressive number of months.

How many ounces of coconut milk is in a can?

Canned coconut milk is an average of 14 ounces.