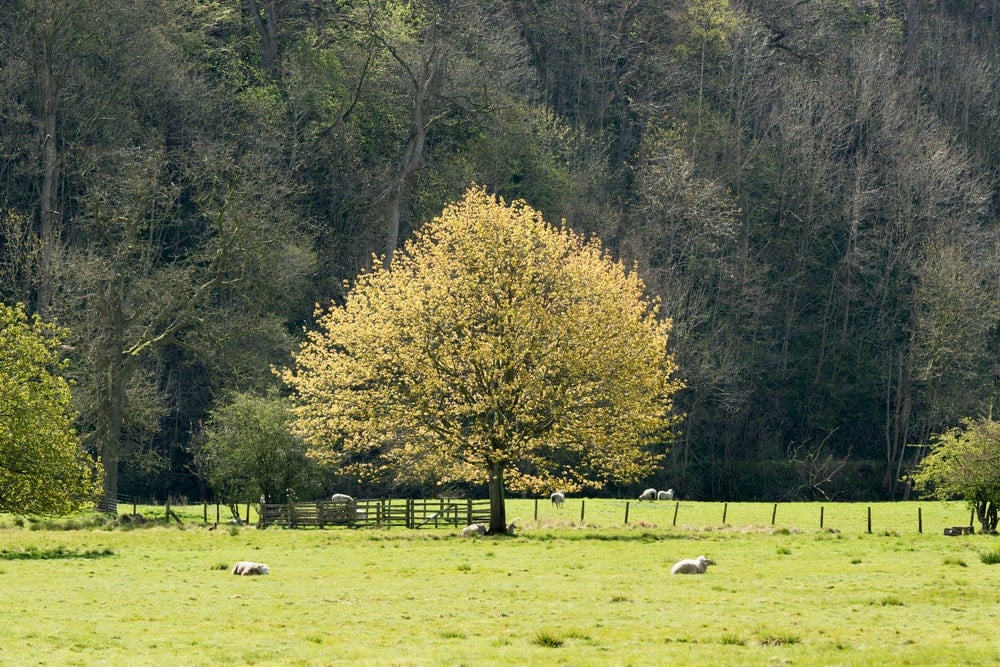 The English elm is an absolute monster. All elms are considered to be a good shade tree, but ulmis minor ‘atinia’ definitely takes the cake on this one. This hardy plant is a tough one and is one of the only elm species that has stood a chance against Dutch Elm Disease.

But stick around a while first, and learn about this extremely cool and tough tree, the English elm.

Formerly known as the horse may, or Atinian elm, the English elm is a minor cultivar of the field elm. Once upon a time, the English elm was the most common field elm of south-central England — that is before the Dutch Elm Disease hit.

This tree is the largest and fastest-growing deciduous tree in all of Europe and has a very very strange characteristic about it. When folks were researching the English elm tree in order to see if it were a viable candidate for hybridization, it was discovered that samples taken from multiple different trees were all completely genetically identical.

This is because every single English elm in existence is a clone of its mother tree. This is a tree that has completely sterile flowers, and are pretty much only there for show. If you’re interested in discovering how it is that English elm trees reproduce, read on! 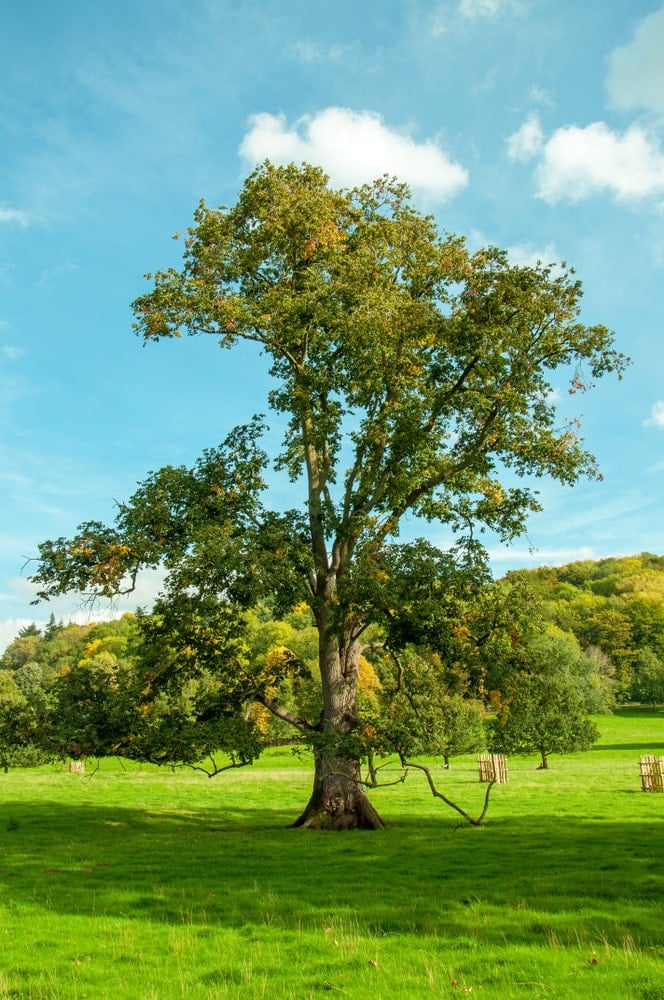 English elm trees are incredibly tall and can grow to be over 40 meters tall with a trunk diameter of around 2 meters. This classifies it as being an absolutely giant. The largest specimen on record grew to be 46 meters tall.

English elm bark is light gray with a unique cork-like texture. Whereas most other elm species have vertical diamond-shaped furrows, the English elm has scaly bark. The scales will chip away to reveal a cream-colored inner bark. Mature elm trees will shed much of their outer bark.

Branches grow along the entire length of the trunk, with the canopy branches forming a fan-like crown, and the lower branches forming horizontal boughs. This kind of branch growth creates a figure eight type silhouette, whereas other types of elms possess more of an umbrella-shaped canopy.

An English elm twig is stout and straight with a light herringbone pattern on their skins. Small deep purple flowers with no petals grow in the early spring before the leaves do, they are both hermaphroditic and completely sterile.

An English elm leaf will sprout in April (a month earlier than most field elms) and begin as soft light green, before deepening into a darker green. They are almost orbicular in shape (circular) that taper out into a long point. This feature is typical of the genus Ulmus elm leaves.

The roots of this large tree are moisture-loving, and will often try to grow closer to piping and irrigation — making them an invasive root system. The roots are shallow and wide-spreading, growing in any direction they please in order to find water.

How do English Elm Trees Reproduce?

Earlier it was mentioned that English elms both have sterile flowers, and are all genetically identical. This may seem contradictory, but this elm is unique from its siblings in the way that it only reproduces through root sprouting or root suckers.

When a mature tree dies, oftentimes its roots will survive underground. New saplings sprout from these surviving root systems, and they are exact clones of the mother tree. This is why all English elm is genetically identical. It is currently unknown why English elms still produce flowers if they are sterile.

This means that English elm trees are not able to repopulate different areas, and can only exist where their groves were already successfully, or if they are propagated by a human.

Yet still, the English elm flower produces a winged fruit called a samara, which is orbicular in shape with papery wings that contain the seed. However, these seeds are not viable for germination.

Is the English Elm Tree Endangered? 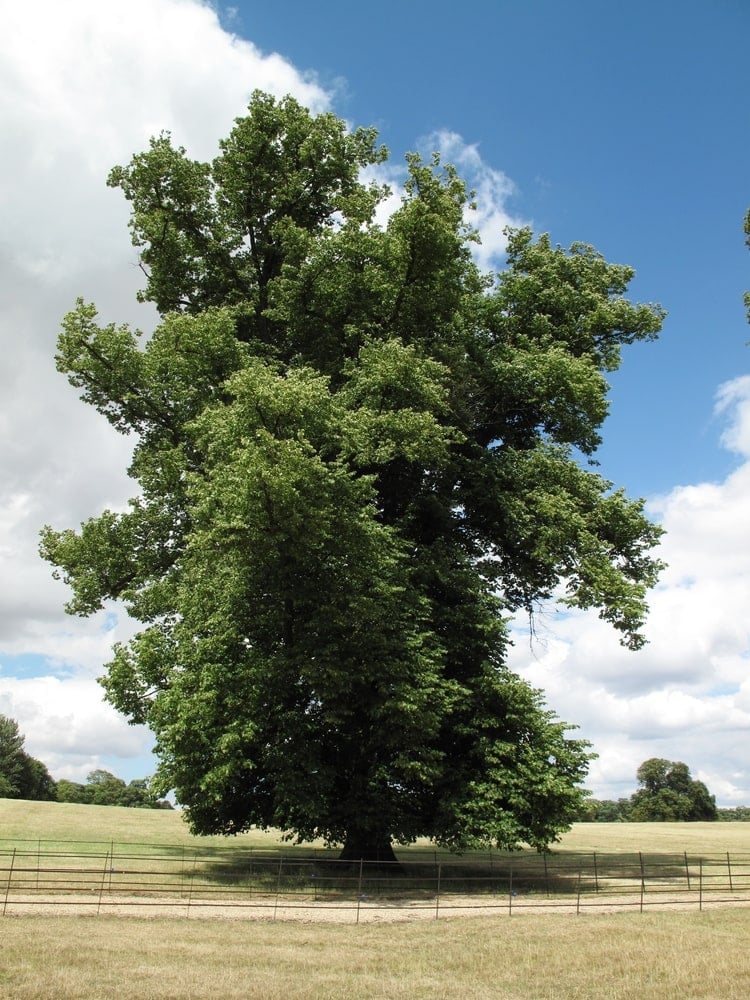 Dutch Elm Disease is a fungal disease caused by the sac fungi and is spread by various species of beetles (like the elm bark beetle). Whereas many other species have had a detrimental reduction in numbers, especially the American elm tree which is currently on the endangered list, the English elm tree has proven to be less affected.

This is because of the interesting way in which the English elm reproduces. Because the population isn’t able to spread too far-reaching places, the disease is somewhat contained. Although the saplings that do sprout from the roots are infected with DED transferred from the mother trees’ root system, it can live up to 20 years before the fungus takes over and kills the tree. But that tree’s root system will still survive and enable more root sprouts.

Where do English Elm Trees Grow? 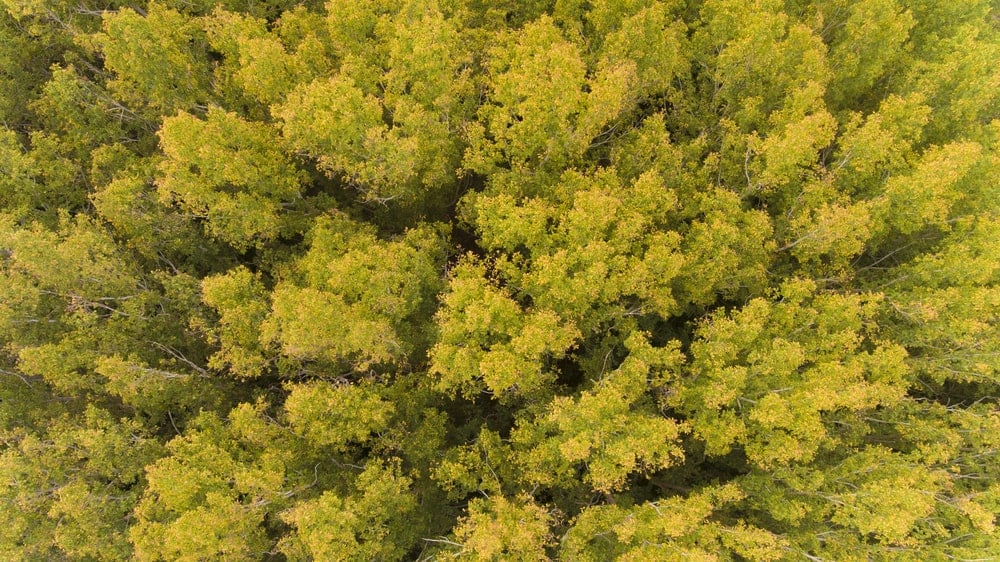 It is said that the English elm tree was brought to England during the bronze age, and was used as an ornamental tree — a way to bring green to urban areas. They cannot commonly be found beyond Brighton and Edinburgh.

English elms prefer soil that is well-drained, very moist, and it can be pretty much any pH level. They tend to grow best along hedgerows and in woodland areas. Due to their enormous size, fighting for sunlight has never really been an issue, and they can grow in crowded forest areas where there is competition, or in an open field where there is none.

How are English Elm Trees Used?

English elmwood was valued for many purposes for its resistance to rot in water-saturated conditions. It was also considered very useful because it was very resilient to crushing damage, and so was used in the manufacturing of jetties, lock gates, timber piers, and water pipes from hollowed trucks.

English elmwood was never used to the same degree as oak wood was for furniture manufacturing, due to the fact that the wood was more likely to swell, split, and shrink (because of its ability to adapt to water-saturated conditions). 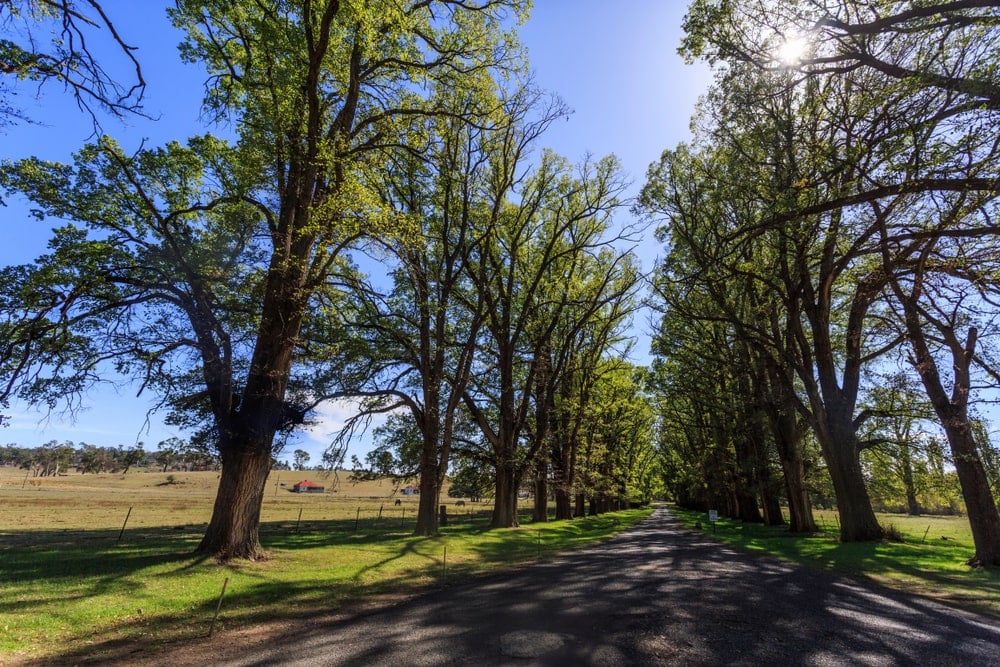 The main way in which the English elm was used was as a way to bring aesthetic appeal to the English countryside. Nowadays, because of the Dutch Elm Disease, English elmwood is not used for any sort of manufacturing purposes, as cutting down a healthy tree would be considered a great offense against the elm community.

The foliage of the English elm is also snacked upon by many lepidopteran species (moths and butterflies), including the white-letter hairstreak butterfly, and the stigmella ulmivora moth of the nepticulidae family.

How do you identify an English elm tree?

The best way to identify an English elm from others is mainly by its bark. Many other field elm species possess bark that is rough and vertically furrowed, but the English elm has bark that is smooth and scaly.

Another way to identify an English elm is by the way its branches grow. Most other elms have canopies that grow into an umbrella shape, whereas the English elm has branches that grow along the trunk in a way that creates a figure-eight shape.

What is the root system of an English elm?

English elm trees have invasive root systems. They are a water-loving species, and so their roots will grow in any which direction they need to obtain the most amount of moisture.

Whereas the American elm sometimes converts to a taproot system that grows very deep to access water locked deep in the soil, the English elm has shallow roots that grow very widespread in the search for water.

Is English elm a hardwood?

Pretty much all wood makes for good firewood, but English elm would not be the first choice. First and foremost because the elm species are under threat from the Dutch Elm Disease, but also because English elmwood tends to be saturated with water.

How do you propagate the English elm tree?

Interestingly enough, the English elm tree is only able to reproduce through propagation or root sprouts. They can be propagated by snipping a sapling that is growing from a root system and bringing it to its designated growth area.

Are elm trees native to the UK?

It is a common belief that English elms were brought from Rome to the UK in the bronze era to heighten the aesthetic appeal of the English countryside. Ever since then, they have been native to the United Kingdom.

Are elm trees protected in the UK?

Yes, because they are currently at risk of DED, they are considered a protected species.

If English elms weren’t under attack from the Dutch Elm Disease, they would be able to live over 100 years of age. Since they are currently subject to widespread disease, trees are usually unable to live past the age of 20 years before the infection kills the tree.

English elm trees are enormous trees, and grow to be an average of 40 meters in height. The tallest ever English elm on record is a whopping 46 meters tall.

Elm trees are considered as being the absolute fastest growing hardwood of the hardwood forest. They can grow up to 5 meters in height per year and have a girthy trunk diameter to back it up as well.

Do elm trees have invasive roots?

Certain species of elms have invasive roots, and some do not. For example, if an American elm is growing in a drought-prone area, it will develop a woody taproot system that grows deep into the soil in order to access the water the is locked down there.

But the English elm tree that is so water-loving, will develop roots that grow very shallow in the soil (seldom deeper than 1 meter) and grow in whichever direction the water is. Even if there is plumbing, irrigation, or foundation in the way, it will grow in sometimes inconvenient ways to access water.

Should I prune my elm tree?

For naturally occurring trees, a good rule of thumb is to just let them grow as they may — unless of course, you have an ornamental orchard. Pruning is best reserved for branches that are either growing in an odd direction or appear to be unwell.