Here is everything you need to know about the Eastern Cottonwood tree including its usage, growing conditions, and some frequently asked questions. Also, get to know the other subspecies and varieties of a cottonwood tree. 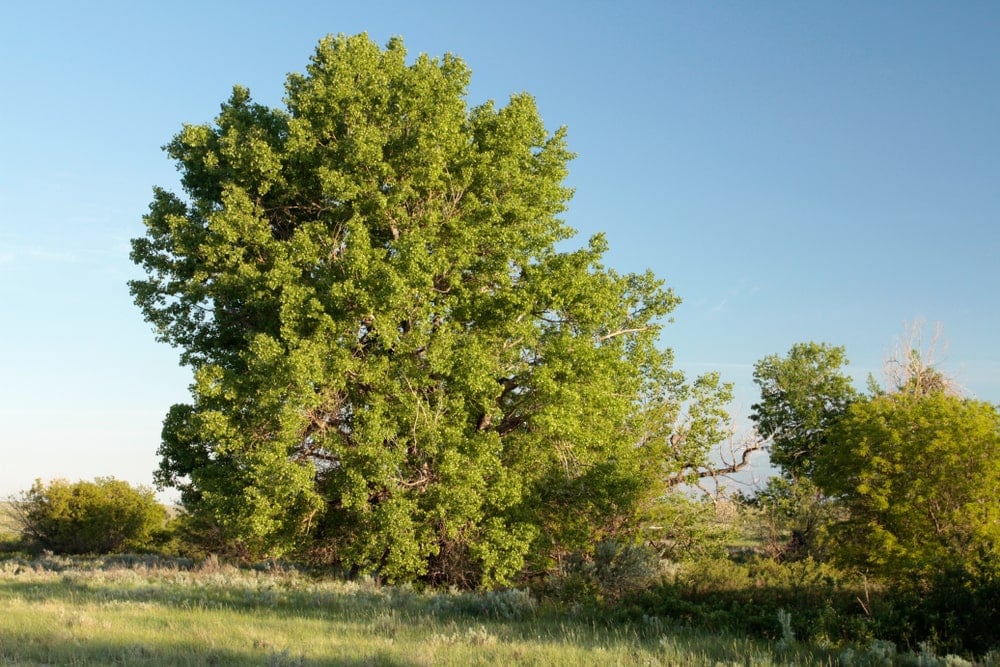 Let’s paint a picture: an enormous shade tree that dwells in lowland areas. A forest of woody plants that rustle in the slightest breeze, almost like an enormous wind chime, that sheds warm to snow in the summer months.

Sounds pretty magical, doesn’t it? But we are not in a fairy tale. The eastern cottonwood is very much part of reality, though the way it produces seeds may seem other-worldly. This tree variety is enormous, gorgeous, and is prevalent in much of eastern North America.

So come along and learn about populus deltoides – the magical and wonderful eastern cottonwood tree. If you’re curious about different kinds of trees, check out this article on 101 Types of Trees from around the world. Every day is a day for celebrating trees!

One of the largest and fastest-growing trees of all American hardwoods, the eastern cottonwood also goes by the name of “necklace poplar“. This nickname alludes to the downy cotton seeds that the tree explodes within the summertime. Sometimes the cotton strings the seeds along in a manner resembling a string of beads, or otherwise, a necklace.

Cottonwood trees are part of the Populus genus, which both aspens and poplars are kin to as well. It is common to mistake a cottonwood tree for a poplar, but they only have very subtle differences. They are so similar in fact, that the poplar is sometimes referred to as “the cottonless cottonwood“.

This fast-growing, long-living deciduous tree can live up to 200-400 years old in ideal conditions, making it an honorary member of the old-growth community. Otherwise, it survives to be 70-100 years in unideal conditions. The oldest tree, the Balmville cottonwood from New Zealand, was 42 meters tall and lived from the year 1699-2015! That’s 316 years old! 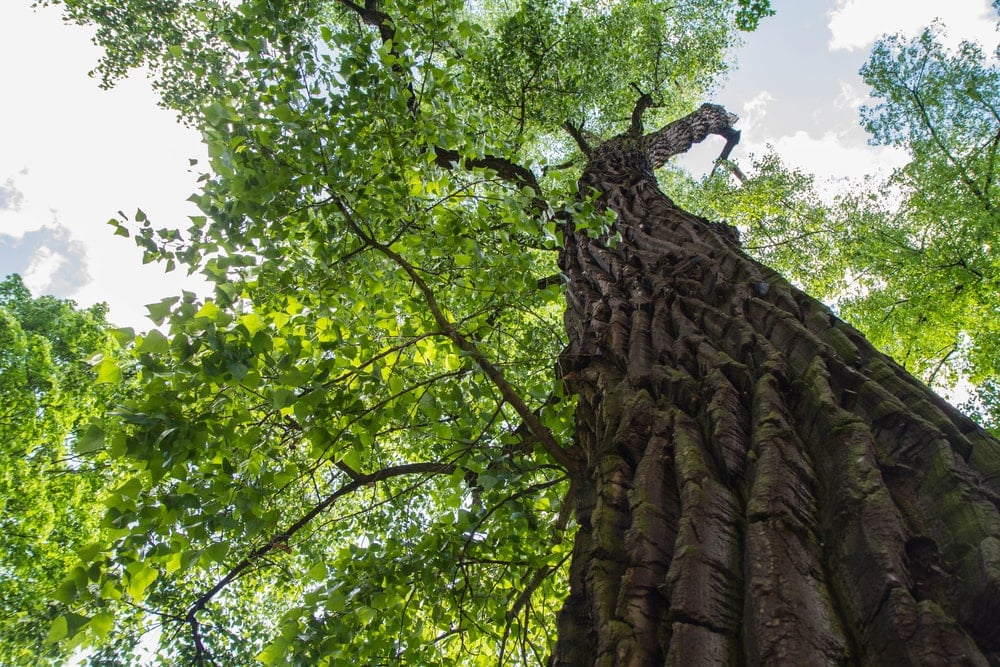 The eastern cottonwood is a rather tall and wide tree, ranging from 20-60 meters in height, and trunks usually over 2.5 meters wide. They grow incredibly fast as well — in Mississippi river bottoms they can grow 5 meters a year!

A young tree has a silvery-white smooth cottonwood bark, with very minimal vertical fissures. Older trees become quite a dark gray in color, and the fissures become deeper and more prominent. Their roots grow in shallow soil — only about a meter deep.

If we travel up the trunk, we’ll find that branches tend to start growing very far up the trunk, which grows towards the sky, rather than parallels with the ground. An eastern cottonwood twig is stout, and a dull yellow in color.

On the ends of these yellowish twigs, you’ll find coarsely toothed leaves — a rough and jagged leaf margin. A cottonwood leaf is a very dark green in the summer and a vibrant yellow in the fall. With a flat petiole about 5 inches long, and a triangular leaf shape, their flat stems cause leaves to shake from even the gentlest of breezes. This feature is one of the eastern cottonwoods’ most defining characteristics (and is quite similar to the quaking aspen in this way!)

How do Eastern Cottonwood Trees Reproduce? 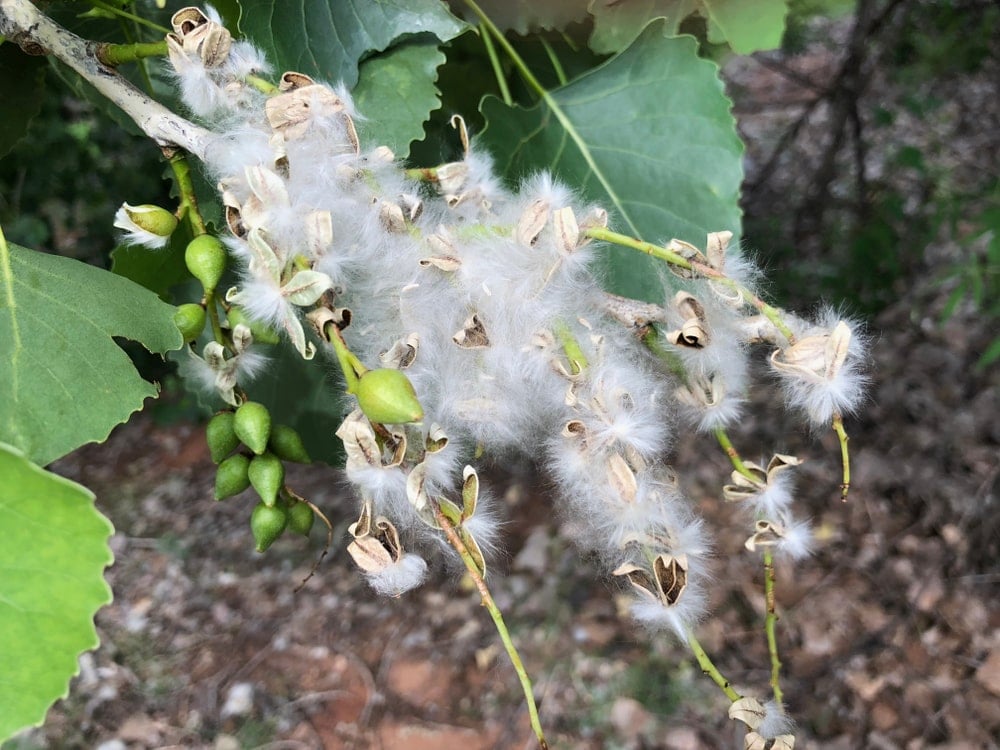 The eastern cottonwood trees are dioecious in nature, meaning that it produces single-sex flowers — one tree will have male flowers, another will only have a female flower. The flower that is produced from these trees is called a catkin, and they are clusters of tiny flowers with indistinct or no petals at all.

When a pollinator successfully brings pollen to a female tree, they will develop samaras, which are small winged seed capsules (winged to help with distribution) in the early summer. In the later summer, these capsules will split open to unleash giant numbers of tiny seeds that are encompassed by layers of downy cotton. This explosion of soft, snow-like cotton is another defining characteristic of eastern cottonwood trees. A single cottonwood is able to release 40 million seeds in a single season!

*Many farmers find cottonwoods to be a nuisance for their ridiculous production of cotton that sticks to nearly everything. But if you’ve ever walked in a cottonwood grove in the summertime, there is something very romantic about snow in August.

Many trees are able to colonize though clonal saplings — this means that when a tree is cut down, saplings will grow from the surviving roots, and are literal clones of the mother tree. When it comes to the eastern cottonwood, if a mature tree is cut down it will simply re-sprout, not as a clone, but as itself.

Where do Eastern Cottonwood Trees Grow?

The eastern cottonwood tree grows specifically in the midwestern United States and is only found in random occurrences in northeastern America, usually thanks to intentional planting of cottonwood groves.

This large tree can be found in the southern Canadian prairies, northeastern New Mexico, and in many states throughout central and eastern America.

What are the Growing Conditions of an Eastern Cottonwood Tree? 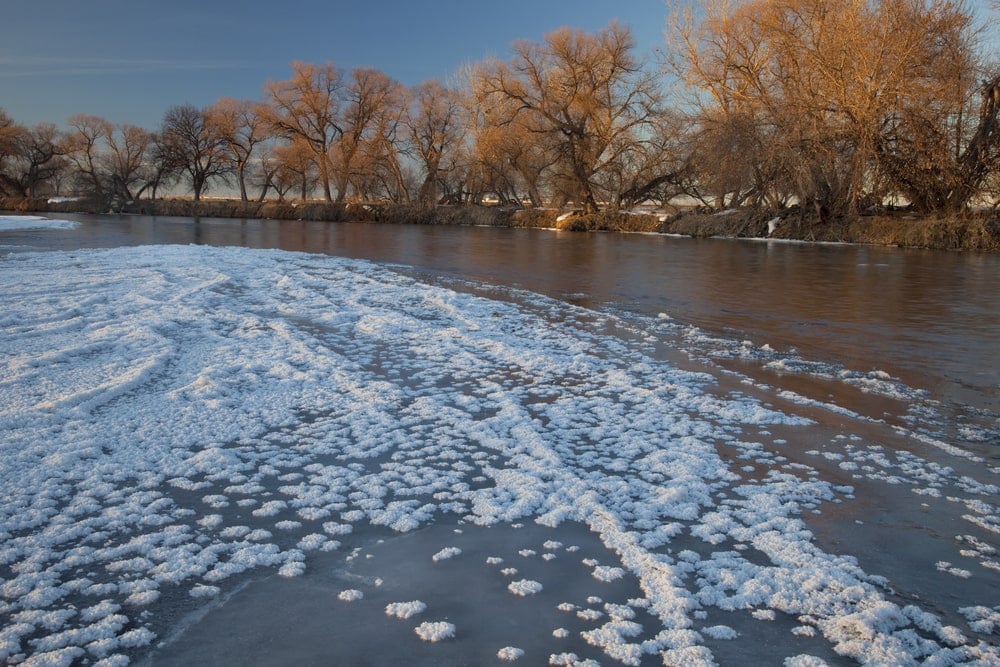 The ideal growing conditions of an eastern cottonwood usually occur near smaller bodies of water — swamps, rivers, and especially mud banks resulting from flooding. These conditions are ideal for seedling germination, as waterlogged soil protects seeds from heat and from birds and mammals who live to feed on seeds.

They prefer soils that are low in nutrients with a moderate pH level. The eastern cottonwood is able to grow so tall because it needs sun exposure. Full sun is an absolute necessity for this variety of tree. It completely happens standalone in a field where there is no competition, but it will grow as tall as it needs to penetrate the forest canopy.

Eastern cottonwood trees are also able to grow in areas that aren’t as moist, but it will slightly alter their behavior. Normally, when a cottonwood is happy it will follow the regular fall foliage shedding. If a cottonwood is in a drier location or is experiencing drought, it will drop its leaves far earlier in the season due to leaf rust, and its spectacular yellow fall foliage will be entirely missed.

How are Eastern Cottonwood Trees Used?

Typical of the populus genus, the eastern cottonwood tree has very softwood. It is not particularly straight-grained or strong, but it is heavy. It weighs 28 pounds/foot. Since the wood is not particularly attractive, uses are usually reserve for the interior parts of furniture, or for plywood.

They are also a very important food source for various caterpillar and lepidopteran species (moths and butterflies).

What are Other Types of Cottonwood Trees?

It’s a bit of a confusing story, differing cottonwoods from poplar trees. Simply remember that they are all part of the populus genus, and the varieties are from different families. Cottonwood species can be divvied up into 3 subspecies, and 5 varieties: 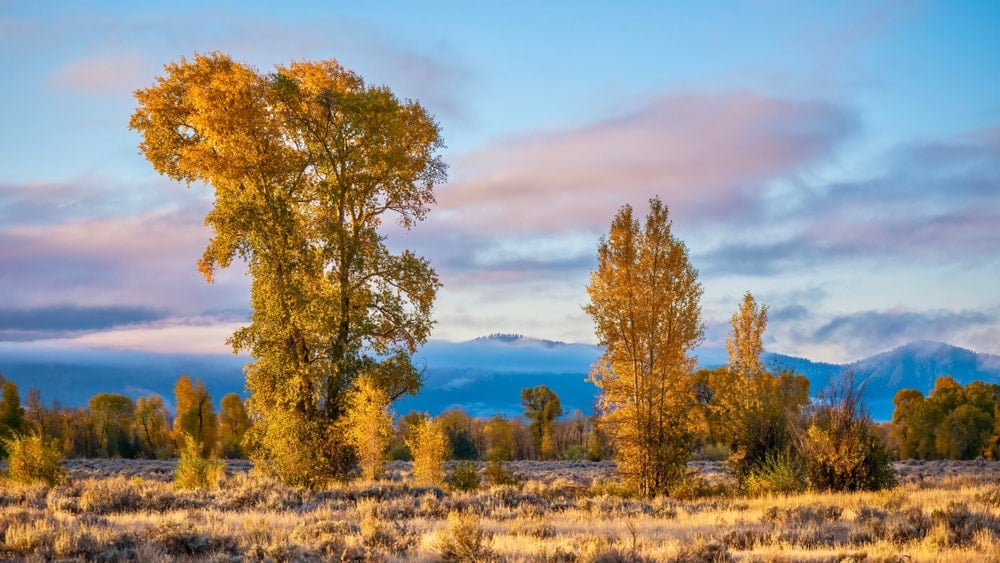 Native to southeastern Canada (specifically Quebec and Ontario) and the eastern United States (specifically ranging from North Dakota to Texas).

Native to warmer and wetter regions of North America, where its relatives cannot survive. Also known as the “downy poplar“, this tree is part of the willow tree family (Salicaceae).

A hybrid of narrow-leaf cottonwood and plains cottonwood, native to the Rocky Mountains of North America, and part of the willow tree family (Salicaceae).

A slim and tightly clustered variety native to the Rocky Mountains and surrounding plains of western North America, and part of the willow tree family (Salicaceae).

A species of cottonwood poplar native to Europe, Asia, and Africa, and is part of the willow tree family (Salicaceae).

Also known as the Californian poplar or western-basalm poplar native to western North America, and part of the willow tree family (Salicaceae).

How fast does the eastern cottonwood tree grow?

Eastern cottonwood is considered a rather valuable tree in the lumber industry, due to the fact that the tree is so fast-growing. It can grow anywhere between 3-5 meters in height per year, accompanied by a hefty trunk to support its impressive growth.

How long does the eastern cottonwood tree live?

When does an eastern cottonwood tree reach sexual maturity?

Although eastern cottonwoods produce their downy seeds every year, seeds will only be viable for germination every 2-10 years. They will produce seeds before they are sexually mature, but they will only become viable once the tree is between 5-10 years of age.

What is eastern cottonwood used for?

Because the eastern cottonwood grows so quickly, its wood isn’t going to be super strong, straight-grained, or particularly attractive. However, its wood is still used in the manufacturing of plywood and is used for the interior parts of furniture as well.

How do you identify an eastern cottonwood tree?

The easiest way to identify an eastern cottonwood is by its very flat, dark green leaves that rustle in even the slightest breeze, or by the incredible amounts of downy cotton that contains the seeds of the tree that is produced in the summertime.

Why is it called a cottonwood tree?

They are called cottonwood trees because of the downy, cottony hairs that encompass their seeds. In the summertime, in areas with cottonwood trees, almost everything will be completely covered in cotton.

Is cottonwood the same as poplar?

Cottonwood and poplars are part of the same genus.

Can you use cottonwood cotton?

Cottonwood cotton can actually be used, but more as a stuffer of pillows and comforters. It is possible to weave the cotton into strands, but it won’t be as strong or easy to use as regular cotton.

Is cottonwood a hardwood or softwood?

Do cottonwood trees have deep roots?

How do you stop your cottonwood tree from shedding?

The only way to guarantee that a cottonwood won’t produce cotton is by ensuring that it is a male tree. Or, plant a poplar! They look very similar, but poplars do not produce cotton.