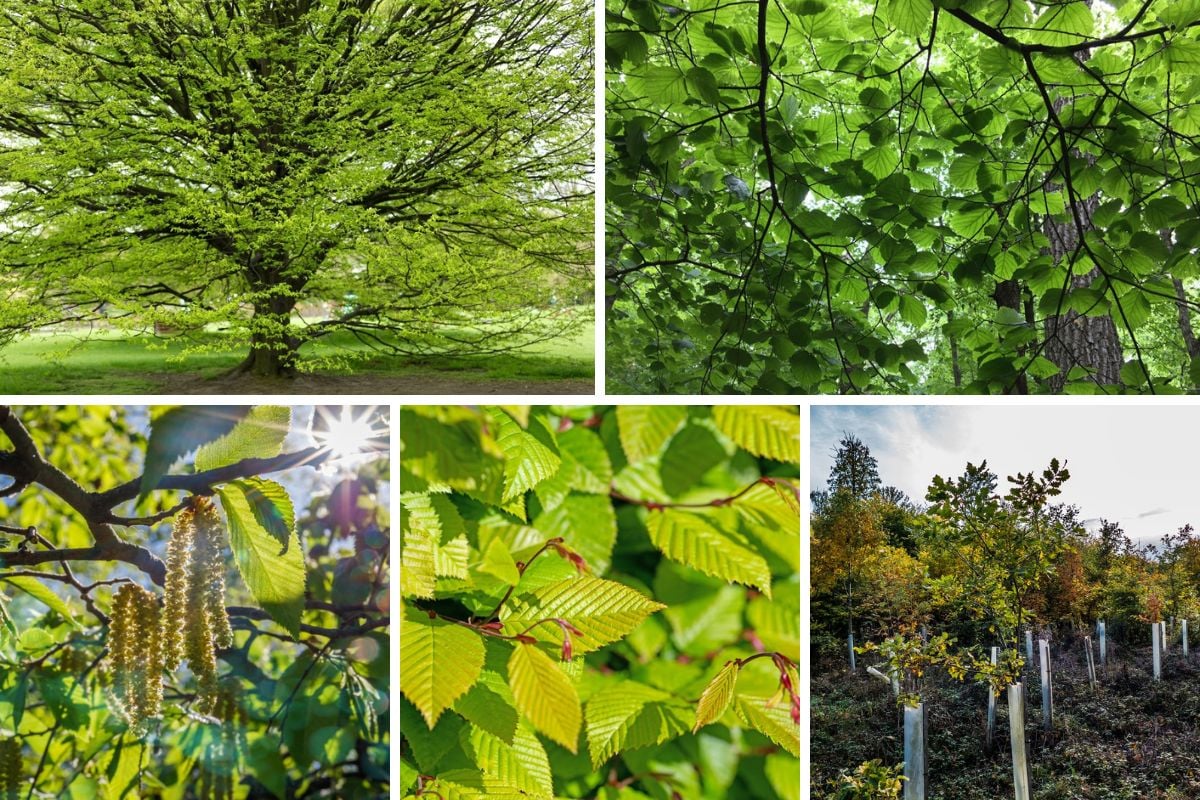 We are so incredibly lucky in North America for all the incredible native plants that occur here. Although this does occur everywhere on the planet, there is something special about walking down the street and recognizing a vast number of plant and tree species in the area.

Are you interested in becoming a plant and tree identification expert? Head on over to 101 Types of Trees from around the world to get yourself started. In the meantime, keep scrolling to learn about carpinus caroliniana, a tiny yet beautiful tree that will bring charming ornateness to any property.

Part of the genus Carpinus and the Betulaceae family, the American hornbeam is a small hardwood tree. It is a deciduous, understory tree that is native to the Chicago area. They are usually used as landscape and street trees because they are small, easily maintained, and very attractive.

They are sometimes referred to as a “blue beech” tree because they greatly resemble a small version of a beech tree, but with blueish/gray bark. They are also known to be called “musclewood” because their wood is incredibly strong, flexible, and close-grained — like muscle fibers.

American hornbeams are long-lived, and can sometimes exceed 300 years (this puts them in the old-growth category) They are rather slow-growing, never usually exceeding 12 inches in height per year. They will grow as either a single-trunked tree or a multi-trunked shrub.

Starting with what occurs below the soil, the American hornbeam possesses a rather shallow root system. Because they only grow in regions that are high in humidity and high in annual precipitation, their roots will grow in shallow soil, laterally, and in a wide-spreading manner.

American hornbeams are small trees, so small that they are sometimes considered as being shrubs. They are often planted close together to create a natural barrier. They usually grow to be between 10-15 meters in height, with rather narrow trunks that grow in a crooked manner. Thick branches begin to grow rather close to the base, resembling multiple trunks.

Along the trunk grows very smooth bark. In young trees, the bark is a beautiful blue-gray color, this is how they are most easily recognized. In older trees, the bark will begin to furrow near the base and blend into shallow fissures along the length of the trunk. 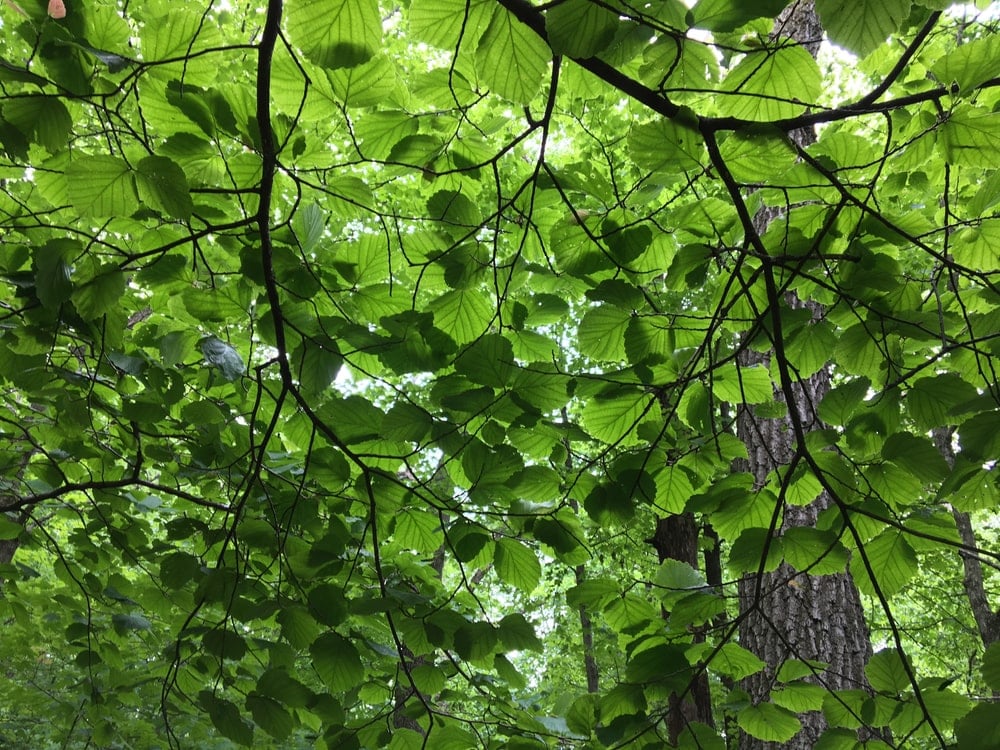 At the ends of twigs, there will grow leaves that are alternately arranged and are anywhere between 2 and 5 inches in length. The most distinct feature of hornbeam leaves is in their veins. When leaves first emerge, they are decorated with bright red-orange veins. These veins give the leaves a corrugated texture.

The leaves themselves will sprout as a stunning purple color, which eventually grows into light green, and then into a red-orange color as fall approaches. The leaves have a double-serrated margin and are wedge-shaped. A hornbeam leaf will sprout in the very late winter or very early spring.

How do American Hornbeams Reproduce? 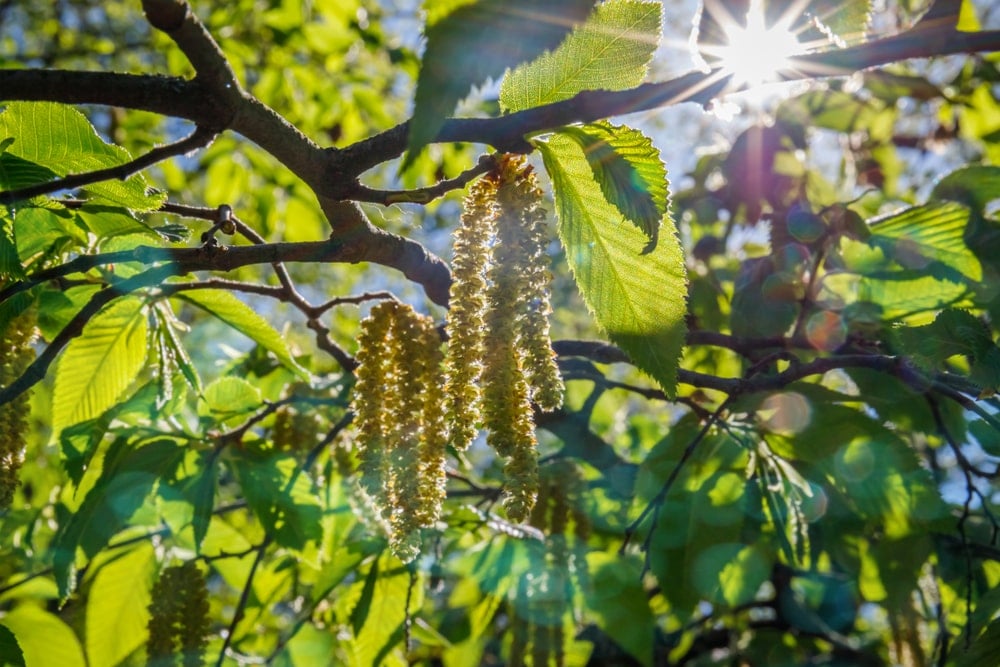 At the same time that leaves sprout, so will hornbeam flowers. American hornbeams are monoecious, meaning that they grow both male flowers and female flowers on the same branch.

Because both sexual characteristics are present on the tree, it is able to become fertilized through wind pollination. Wind will blow the pollen out of the male flower, which will then blow into the female flower, successfully reaching her ovule. 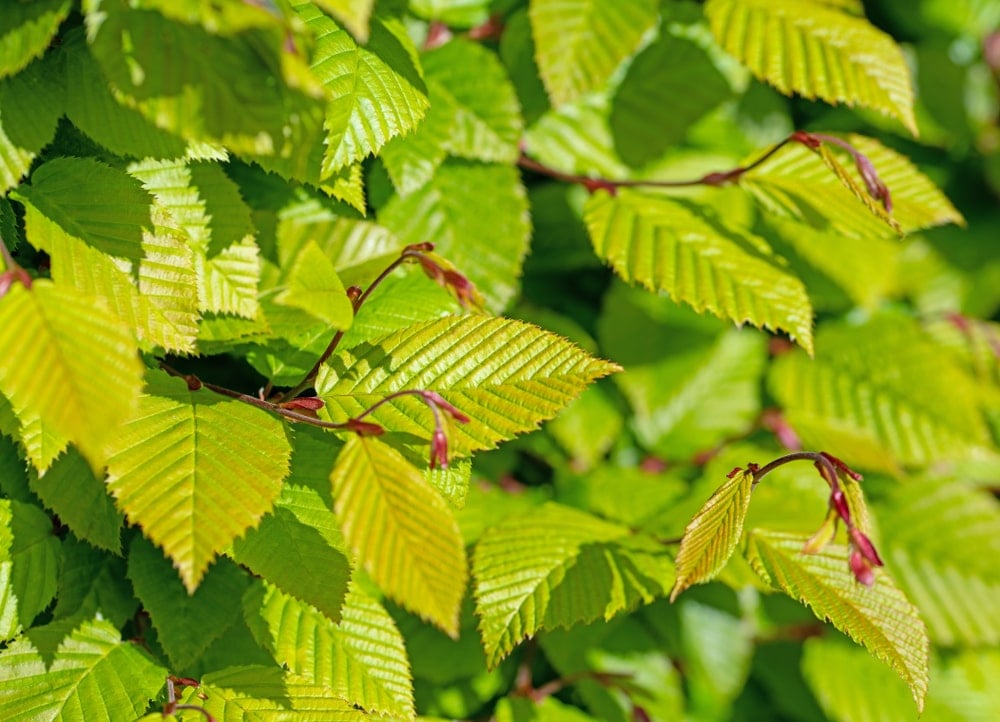 The seeds of an American hornbeam tree don’t usually germinate until 2 years after they drop from the tree. Many of them end up getting eaten by small mammals and birds before they are able to develop into a seedling, but at least they will eventually be dropped in another area.

The fruit that comes from an American hornbeam tree is a light brown winged nutlet. They mature in October and develop in clusters of involucres. Involucres basically leafy winged bracts, which are specialized leaves usually involved in reproduction.

These bracts resemble an umbrella-shaped covering, which not only protects the fruit but also helps carry it to a farther location, which helps with increasing the spacial population of the tree.

American hornbeam will usually reach sexual maturity and become fertile after about 15 years. It will reach its peak seed production time between 20 and 30 years, and will eventually stop producing seeds around the age of 75.

What are the Subspecies of American Hornbeam?

The American hornbeam can be divided into two subspecies, which are mostly characterized by their growing locations. There are not many differences between their physical appearances.

The leaves on this subspecies are usually smaller and more broadly shaped. This variety will grow specifically from the lower Mississippi valley to eastern Texas, and from the Atlantic coastal plains to northern Delaware.

The leaves on this subspecies are slightly larger than the others but tend to be more narrow in shape. This variety will grow specifically in the Appalachian mountains and westward to Minnesota, to southern Arkansas.

Where do American Hornbeam Trees Grow? 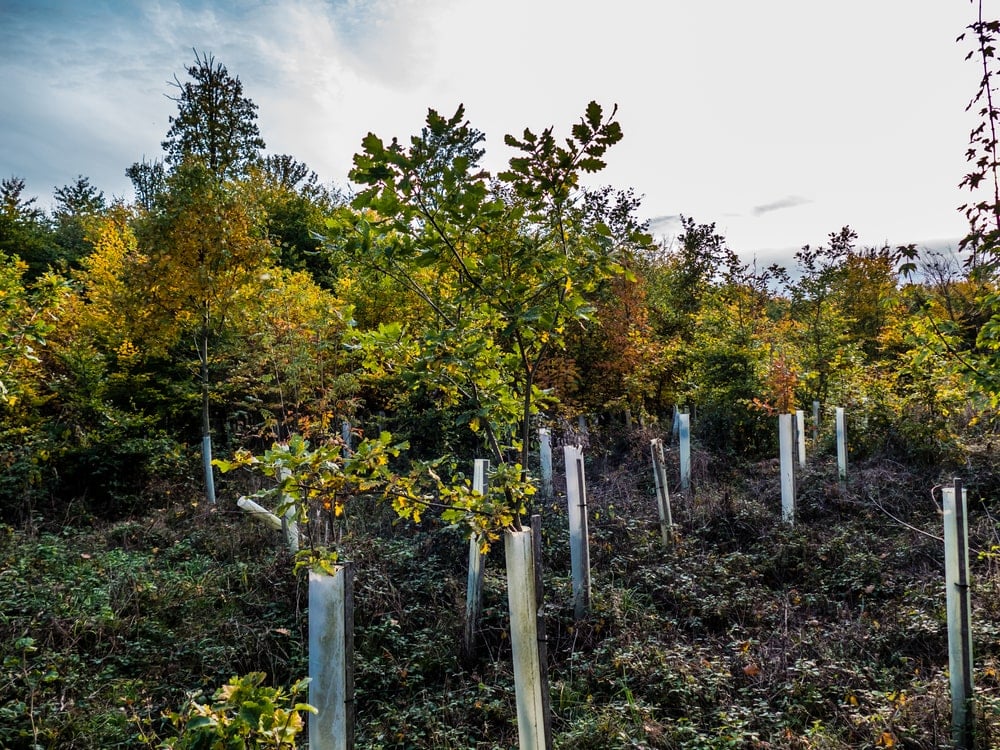 The American hornbeam is a native tree to the eastern side of North America. Though it is called the “American” hornbeam, it does grow in certain regions in Canada as well. Specifically in Canada, it grows in southeastern Quebec and southeastern Ontario.

In the United States, it grows in many of the eastern states, including Minnesota, Florida, Texas, Arkansas, Mississippi, and Alabama.

In these regions, they will most commonly be found growing along ravine bottoms, and along the borders of swamps, streams, rivers, and lakes. This is because they are a water-loving species.

When they aren’t grown naturally, American hornbeams are planted in either home or woodland gardens, as a street tree or ornamental tree, but not usually as a shade tree because of their modest height.

What are the Growing Conditions of American Hornbeams?

American hornbeams are partial shade lovers, which is convenient since they really don’t grow to be all that tall, and would hardly be able to beat out many trees in the forest canopy competition. They can handle a maximum of 6 hours of sunlight per day. They should be planted where there isn’t full coverage.

American hornbeam trees absolutely need very moist soil. They like soil that is high in nutrients, is highly acidic, is very wet, but is also well-drained.

These trees prefer to grow in regions where there is a very healthy amount of precipitation per year. To make up for the potential for lesser precipitation, they will usually be found growing alongside lakes, streams, swamps, and rivers.

This variety of hornbeam will not tolerate any sort of salt spray or soil salt. They won’t usually tolerate soils that are particularly alkaline, dry, or clay-like in texture.

How are American Hornbeam Trees Used?

Because the American hornbeam is so small, its wood isn’t widely used in a commercial sense. Although, the wood is a very attractive light brown sapwood that is nearly white in color, and is hard, heavy, strong, and close-grained. For these reasons, hornbeam wood will sometimes be used to make certain kinds of tool handles, as well as walking sticks, walking canes, golf clubs, and longbows.

The American hornbeam is mostly known as being a very attractive landscape tree. It isn’t particularly messy, it has beautifully colored bark all year round, its leaves provide an ever-changing kaleidoscope of color, and it is a lovely shape as well. 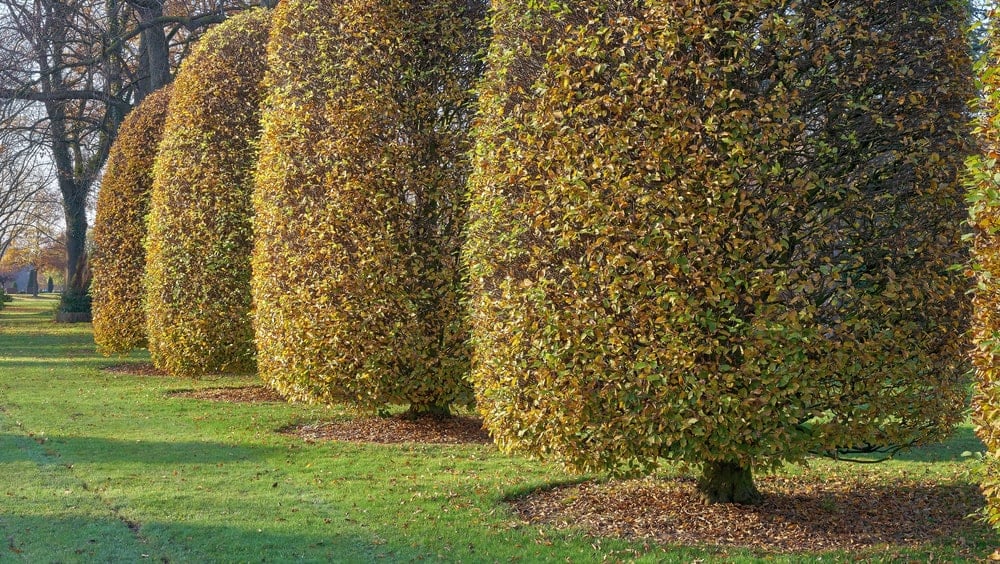 These trees are also an important source of food for several insect and animal species. The caterpillars of certain lepidopteran species (moths and butterflies) will eat much of the hornbeam foliage, specifically the lo moth (Automeris io).

The foliage, twigs, and seeds of the American hornbeam will also be heavily browsed by the ruffed grouse, the eastern tiger swallowtail, and other game birds. Deer will browse on the leaves and twigs of the tree.

Under ideal conditions, the American hornbeam is able to exceed 300 years! This is quite impressive for such a little tree, and it places it in the old-growth community, which is a rather esteemed place to be!

American hornbeam trees are a very short species of tree, either being considered as a small tree or as a shrub. They rarely ever exceed 15 meters in height, and usually linger around 10 meters.

American hornbeams are slow-growing trees, which is well considering how short they are. They will never usually exceed growth of 12 inches per year.

Is hornbeam good for wildlife?

Why do American hornbeam trees drop their leaves?

The American hornbeam is a deciduous tree, meaning that it will lose its leaves every fall. Trees do this to prepare for the cold winter months. Deciduous trees lose their leaves because they will fall dormant, and no longer photosynthesize in the winter — because this requires more energy than the winter sun can provide. Once spring approaches, new leaves will grow back, and the tree will wake up from dormancy.

What is the difference between a European hornbeam (carpinus betulus) tree and an American hornbeam tree?

Should you prune American hornbeam?

When it comes to tree pruning, it isn’t a complete necessity (unless you’re talking to a landscaper). Trees do not need the help of humans to grow correctly, it is more for the aesthetic shape of the tree.

That being said, hornbeams are a popular choice for aesthetic shaping, so that can be done to the preference of the tree owner. Otherwise, trees should only be pruned if they have a branch that appears as being sick or dying, in order to preserve the rest of the health of the tree.

Can you prune hornbeam in the winter?

It would be considered unwise to prune any sort of tree in the winter, including hornbeam. This is because pruning in the winter will result in an open wound that seeps out the sap, creating quite a large mess.

If you are going to prune a tree, it is best to do it in the spring, when the tree has the energy to heal the open wound and to grow the rest of its limbs in a healthy manner.

How do you identify an American hornbeam tree?

Are hornbeam trees a hedge trees?

Hornbeam trees can be grown as hedge trees. For landscaping purposes, they are often planted close to one another to create a natural barrier. Once they develop their crowns, this will create a roughly shaped hedge.

What’s the difference between beech and hornbeam?

Beech and hornbeam look quite similar to one another, both in bark color and texture, leaf shape, and height. However, beech trees will have a more striking fall color than the hornbeam tree, and beech trees grow trunks that are more upright and straight, whereas hornbeams grow in a crooked and clustered manner.

Can you grow hornbeams in pots?

Because hornbeams are such small trees, it is possible to grow them in pots. However, it would be best to grow hornbeam from seed in a pot so that its root system can be properly established in that space constraint.