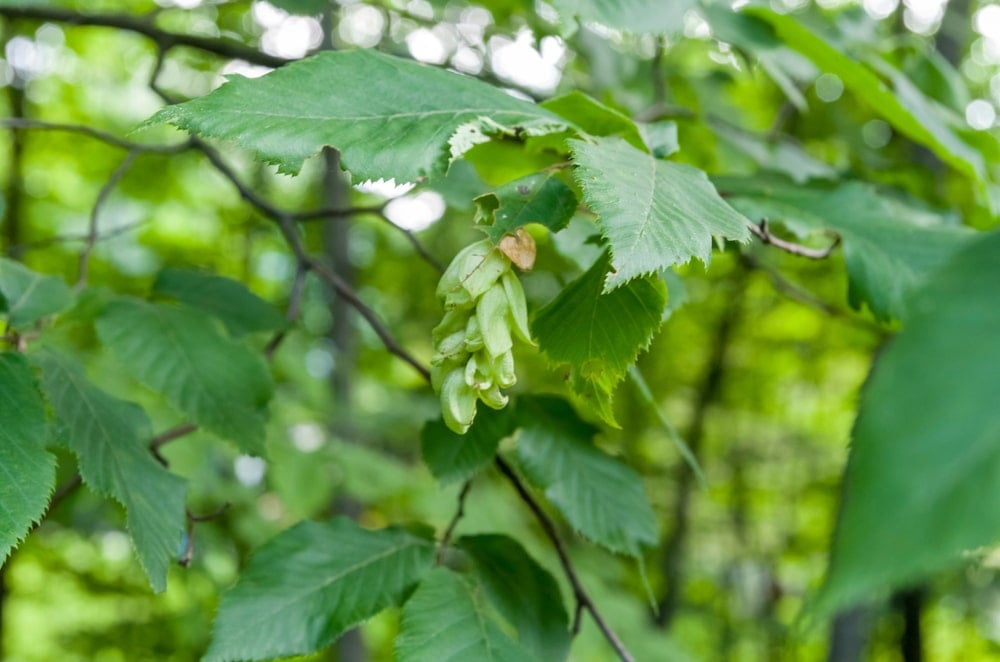 The art of tree identification is a wonderful skill to have. Walking through your neighborhood and observing the native plants brings about a sincere connection to nature. Woody plants can be a little bit more difficult to identify, but right here is a good place to start learning!

Whether they are part of the elm or birch family, all trees are something magnificent to behold. We like them so much that we made a list of 101 Types of Trees just to be able to learn more about them, and to share that knowledge!

Here we’re looking at Ostrya virginiana or the American hophornbeam tree. This tree is slight but lovely and is a lovely contribution to urban areas or in the wild.

The American hophornbeam tree goes by many nicknames; eastern hop hornbeam (due to its natural growing location) hardback, leverwood, and ironwood. The tree has been given the name “ironwood” because it has one of the densest and most thick types of heartwood in the world. Its wood is so thick in fact, that it is not able to float in water like all other types of wood.

American hophornbeams are small deciduous trees, and are part of the understory community. They are closely related to the American hornbeam (carpinus caroliniana), but are distinguished from one another by their bark type and types of nuts.

These trees don’t have particularly striking fall color, but it does bring contrast to those trees that do. They look very similar to the sweet birch (Betula lenta), and they both provide some helpful shade to the mosses and wildflowers that grow on the forest ground.

This small understory tree possesses a rather shallow root system when it grows in moist soils. Rarely growing deeper than 1 meter in moist soil, its roots tend to grow in a lateral and widespread manner.

If the American hophornbeam is growing in dry soils, the roots will develop into a taproot system in order to access the moisture that is deeper within the earth. 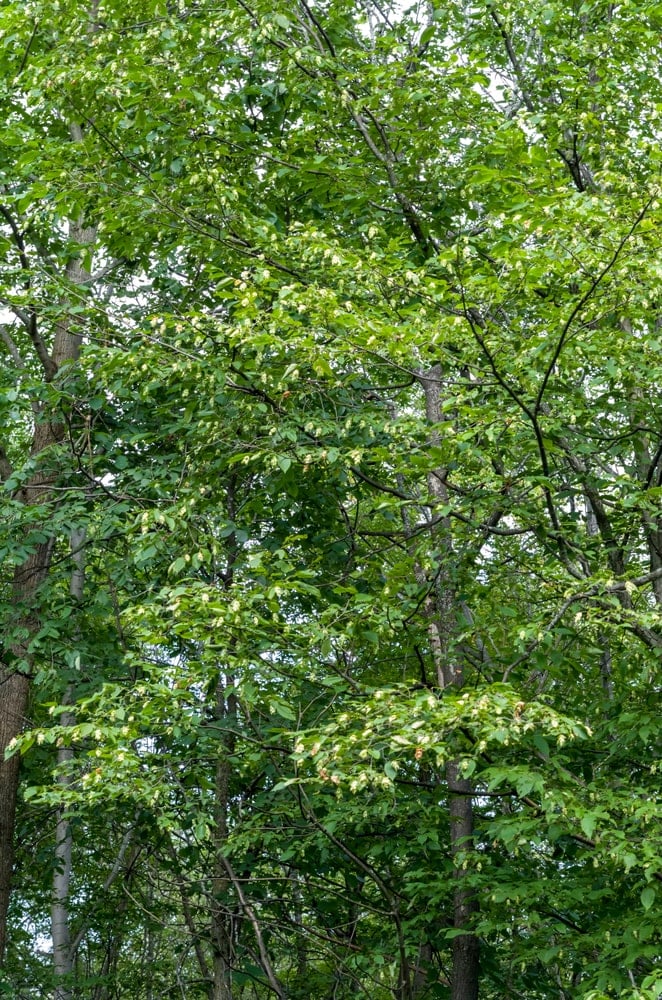 American hophornbeams are rather quaintly sized trees, rarely ever-growing past the height of 20 meters, with a trunk diameter of between 8 and 20 inches. They are extremely slow-growing, and will only grow about 2 meters over the course of 15 years!

When trees are young, they will begin to grow their branches and foliage in a rather pyramidal shape — with longer and more robust branches beginning near the bottom of the trunk, and the lesser developed branches remaining so near the top.

As the tree ages, the uppermost branches will begin to fill out, creating more of an oval or rounded shape. Old trees will have branches that grow horizontally rather than vertically, and many of them will start to droop with weight. This shape ends up making them an excellent shade tree.

The color of American hophornbeam bark varies slightly, from gray-brown to brown, to reddish-brown. Young trees will have smooth, very lightly textured bark. A mature tree will have bark that begins to break into long strips, that end up loosening at both ends. The outer layers of bark will slowly peel away.

Younger branches of the American hophornbeam are a lighter gray color with bark that is more smooth with small lenticels. Very young twigs are sometimes covered with very thin, downy hairs (called trichomes), which will slowly drop away as the tree ages.

American hophornbeam leaves are ovoid acute (ovularly shaped coming to a sharp point) and usually linger around being between 2 and 5 inches in length. They are broad with a double serrated margin, and rather noticeable veins.

How do American Hophornbeam Trees Reproduce? 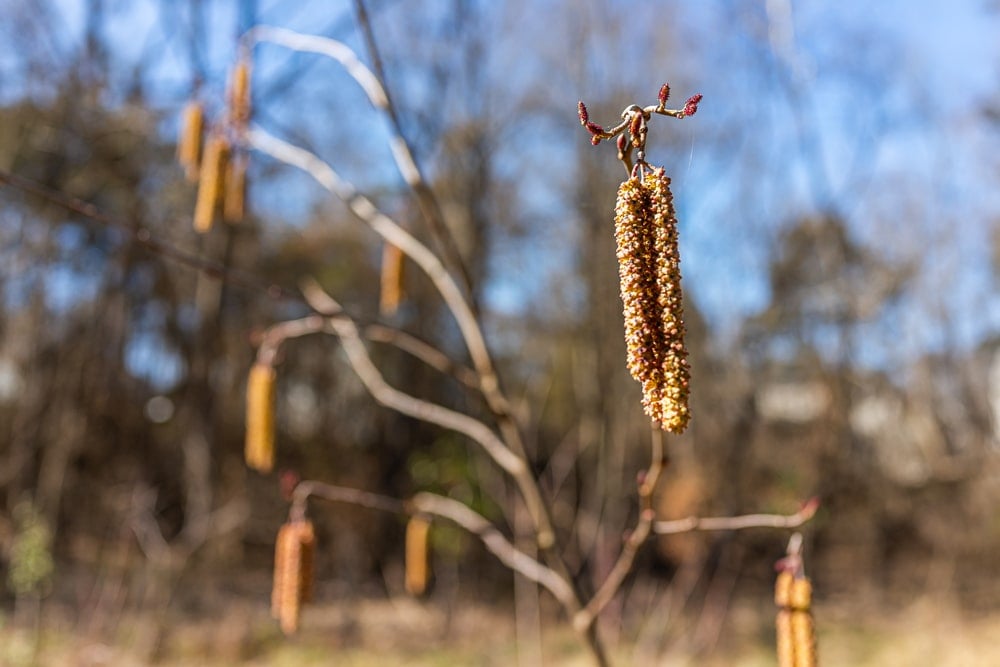 The male flower is staminate (pollen-producing reproductive parts) that grow in catkins, which are clusters of flowers with indistinct or no petals. Male catkins are arranged in groups between 1 and 4 and are around 1-2 inches in length, and they are very light green.

The female flower is pistillate (reproductive parts the produce ovules) that also grow in catkins. A female catkin contains groups of between 10 and 30 small flowers that are less than 1 inch. These small female catkins are a similar light green color. 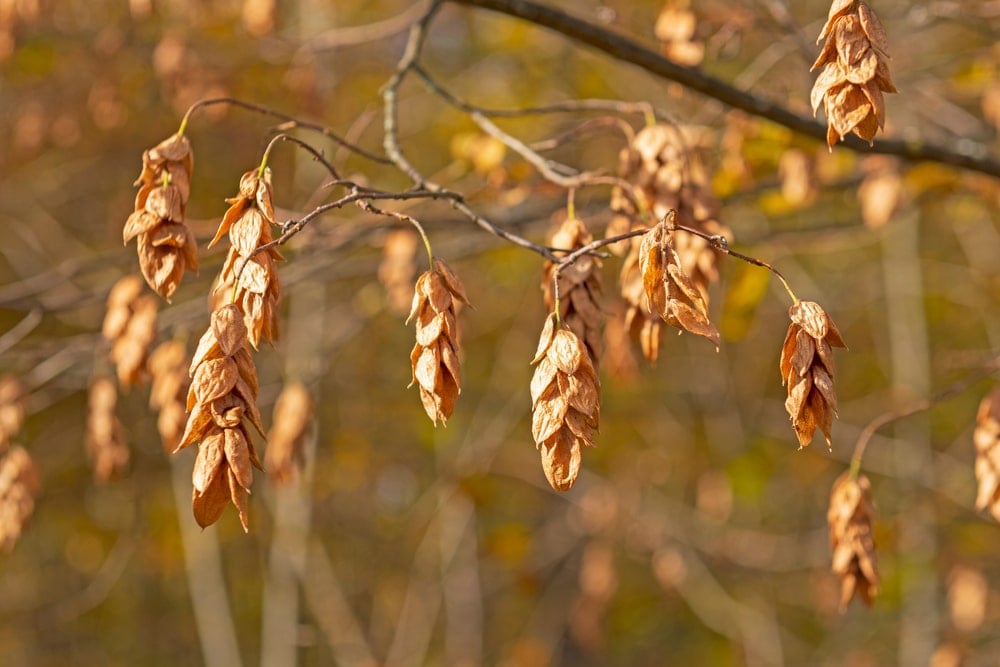 Once the wind successfully brings the pollen to the female flowers and they are pollinated, they will develop fruits that are small nutlets. These nutlets are completely enclosed in a paper sack shaped involucre — an involucre is like a bract, which is a leaf formulated for reproductive purposes.

American hophornbeam nutlets emerge as a very pale light green color, which will eventually dull into a brown color as the fruit matures. Eventually, the nut will drop and be eaten by various forest-dwelling creatures, which will then defecate and spread the seed to various locations where they will germinate, or they will germinate where they are originally dropped.

What are the Subspecies of the Hophornbeam Tree? 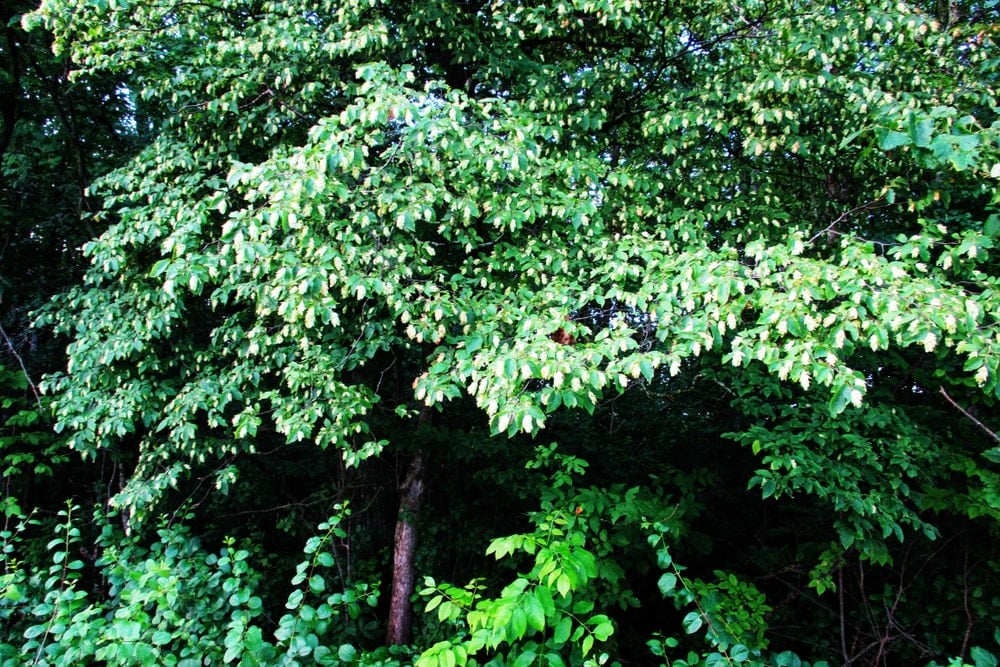 There are two subspecies of the American hophornbeam tree, that are only differed due to their growing areas. They are physically nearly identical, with the first subspecies having leaves that are only slightly smaller.

This subspecies grows along the Atlantic coast of North America, in almost all states of the east side of the United States, and the easternmost provinces of Canada.

This subspecies grows throughout central and southern Mexico, as well as in Guatemala, El Salvador, and Honduras.

Where do American Hophornbeam Trees Grow?

The American hophornbeam is a species of native tree to eastern North America. It will grow north-most starting from Nova Scotia and south Manitoba in Canada, to eastern Wyoming, southeastern and northern Florida, and southwest to eastern Texas.

These trees have been found to grow on rocky slopes and hillsides, and upland woods.

What are the Growing Conditions of the American Hophornbeam Tree?

The American hophornbeam tree apparently thrives on neglect, so in landscaping situations, it is best to let nature use its precipitation to care for the tree. This tree grows only on the east coast, meaning that it prefers to have more annual precipitation than desert regions are able to offer.

This tree thrives in conditions that both have full sunlight or partial shade. Because they are a rather short tree, they will not do well in densely packed forests where there is a lot of forest canopy competition.

This tree prefers to grow in soil that is well-drained, that is slightly acidic, but it is capable of growing in soil with varying moisture levels. When cultivated it will grow best in moist soils, but when wild it will grow in areas that have fairly dry soil, and even in rocky soil.

The American hophornbeam is resistant to drought, but will not be able to survive flooding. They are very sensitive to salt, whether it be salty air or salt from winter maintenance.

How are American Hophornbeam Trees Used?

Because the wood of the American hophornbeam is so dense and heavy, it is not easily workable. It has little to no value, though it has been used for the making of fence posts and tool handles. The wood is a very porous hardwood that has incredibly high density. This means that it is resistant to compression, and is a great wood to use for making wooden longbows.

Otherwise, the American hophornbeam will be planted as an ornamental tree or a street tree. Though it doesn’t have spectacular fall foliage, it grows in an attractive shape. 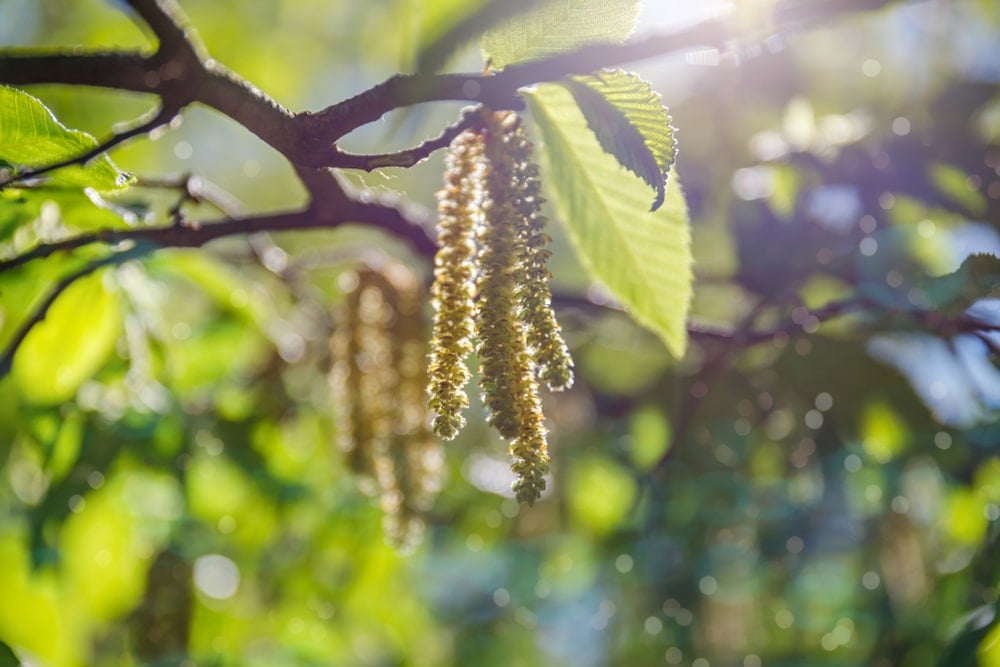 The nutlets and buds of this tree are eaten by several animal species, including rabbits, white-tailed deer, grouse, bobwhite, pheasants, and turkeys. The buds and catkins of this tree are an important source of food in the winter for ruffed grouse.

The American hophornbeam is an understory tree and provides vital coverage for the moss and wildflowers that grow on the forest floor that can’t handle too much sun exposure.

Is the American hophornbeam a street tree?

Because the wood of the American hophornbeam is so heavy and dense, it has little to no commercial value in the lumber industry. However, they are used as ornamental plants or street trees because they are easy to care for, and don’t make too much of a mess.

What is the scientific term for American hophornbeam?

The scientific term for the American hophornbeam is Ostrya virginiana.

The American hophornbeam is an extremely slow-growing tree. They will usually only grow up to 2 meters in 15 years.

How tall do American hophornbeam get?

The American hophornbeam is a small tree, never usually exceeding heights of 18 meters, and usually lingering around 15 meters.

Is the American hophornbeam a hardwood tree?

The American hophornbeam is one of the hardest hardwood trees on the planet. The wood is so strong and dense, that it actually is unable to float like all other types of wood are able to do.

How do you identify an American hophornbeam?

The American hophornbeam is not the most easily recognized tree, other than the way in which its bark peels away. Its bark is a gray-brown color, and the bark peels away in long strips at either end.

Otherwise, the tree can be recognized by the way in which its branches grow. In your trees, the canopy will be shaped like a pyramid, and as it ages it will develop a more robust and circular crown.

What is the difference between an American hophornbeam and American hornbeam?

The American hophornbeam and hornbeam are closely related to one another but have slight differences. The hornbeam tends to have bark that is much more smooth, and its leaves are composed of compound leaves, meaning that each leaf has multiple leaflets.

The American hophornbeam has bark that is rougher in texture that peels off in sheets, and its leaves are simple with serrated margins.

What tree is called ironwood?

The American hophornbeam tree has been nicknamed “ironwood” due to the quality of its wood. It is extremely dense, heavy, and strong.

What is the difference between blue beech and hornbeam?

Hornbeam and beech look somewhat similar to one another, with the main difference being that beech trees tend to grow in a more upright and straight position, whereas hornbeam trees have branches and trunk that grow more horizontally, drooping, and irregularly.

The American hophornbeam tree is a very slow-growing tree. It will only grow about 2 meters in 15 years! That is very slow compared to other trees, that sometimes grow 3 times as much as that in a single year.

Is American hophornbeam good for firewood?

Considering that American hophornbeam trees are very slow-growing and don’t tend to get all that tall, it would be considered unwise to use the tree as firewood, since it works so hard to become a decently sized tree in the first place.

That being said, because the wood is so dense and heavy, the wood would burn rather well — slowly, with a high heat capacity.

Why do ironwood trees lose their leaves?

Ironwood, or lesser-known as the American hophornbeam tree, is a deciduous tree. This means that a tree will seasonally lose its leaves as the cold winter months approach.

Deciduous trees lose their leaves in order to conserve energy through the winter months. They will go dormant and no longer photosynthesize (due to loss of leaves) as there is not enough energy from the winter sun to grow effectively.

Once spring returns, deciduous trees will experience enormous growth as they regrow their spring foliage, come out of dormancy, and photosynthesize once more.