Learn more about the magnificent American Beech Tree, its different types, the many uses of the tree, where it grows, and the pests and diseases that plague them. 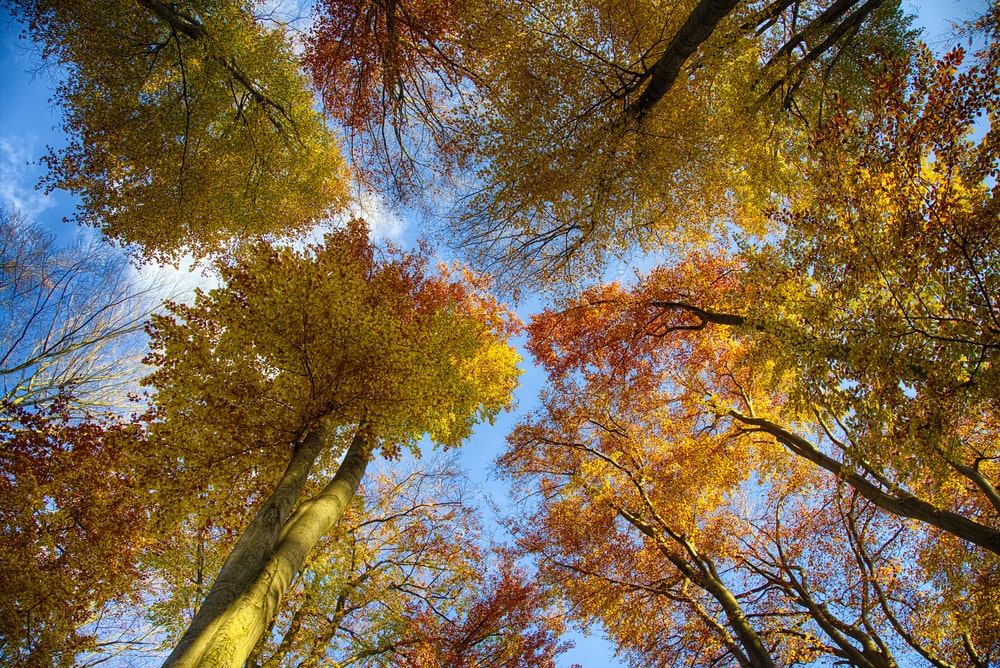 We love trees! We love trees! Well, I love trees, and I want everybody else to love trees too. It’s not enough to just hug a large trunk on your bi-annual walk in the woods (no shade) or to feel kind of sad when your dog pees at the roots of a city tree.

The more you learn about trees, the more you realize that they are far more complex and unique than any of us really give them credit for! We’ve got a giant list of 101 Types of Trees for you to sift through to wet your whistle, but if you’re curious about the American Beech tree, you’ve come to the right place!

This deciduous beauty is a great choice for firewood, bentwood furniture, or simply to hug because it’s so darn glorious. A tree with both male flowers and female flowers, that is buddies with yellow birch, red maple, and sugar maple alike, will provide you with quality shade, and edible beechnuts to boot! (They’re also responsible for striking fall foliage).

The American beech is a rather slow-growing tree, and will only grow about 4 meters every 20 years! But considering that trees live on a different timescale than us, that isn’t too bad. For a tree that lives to be up to 246 (that’s the age of the oldest one on record!) growing slowly isn’t out of the ordinary. In its lifetime it will reach height anywhere from 20-35 meters.

The American beech has super smooth bark which is a silvery gray beech color — you may recognize it because it’s a popular tree for people to carve their names into thanks to the smooth surface. It will stay smooth for its entire lifetime, apart from wounds of course.

An American beech leaf is a quite dark green with teeth that coat the edges. It has a short petiole (the stalk that attaches the leaf to its stem) of about five inches. They are organized in a very simple and symmetrical pattern. The sprout back into life in the very early spring.

Another easy way to identify the American beech is by its winter bud — they are significantly longer and look as though they might be cigars hanging from a tree! There are flowers of both sexes on beeches, and the fruit that they produce are small angular nuts. 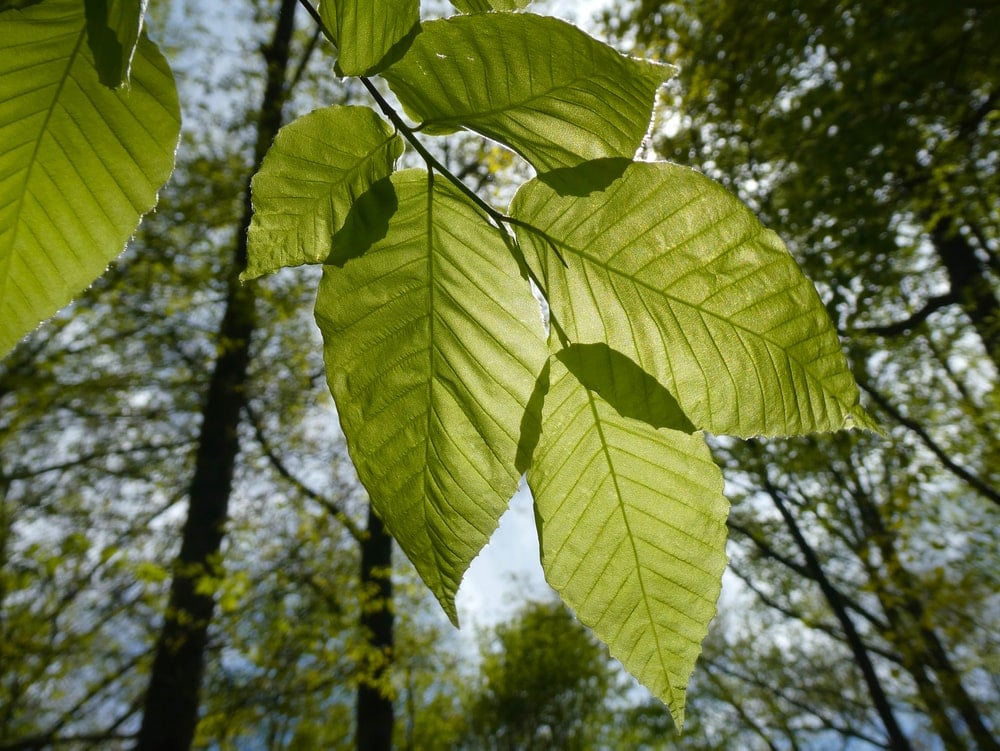 How do American Beech Trees Reproduce?

There are two ways in which the American beech tree reproduces. Remember how it was mentioned that there are flowers of both sexes on this tree? Another term for that is monoecious when a plant possesses both a female flower and a male flower. This means that the tree can fertilize itself, and the beech seeds that drop will be ready to germinate.

However, American beech trees are rather late bloomers and some of them don’t produce their weird triangular nuts until they’re over 40 years old! But luckily by the time they’re 60, they are just dropping rounds of nuts like there’s no tomorrow.

Another way that these wonderful plants reproduce is by a crazy method called root sprouts. Say there was a tree that was injured or died, but the roots remained intact below the earth. Beech saplings shoot out of those old roots, and clone trees would pop out of the soil. These young beech trees are exact replicas of the mother tree. How strange! 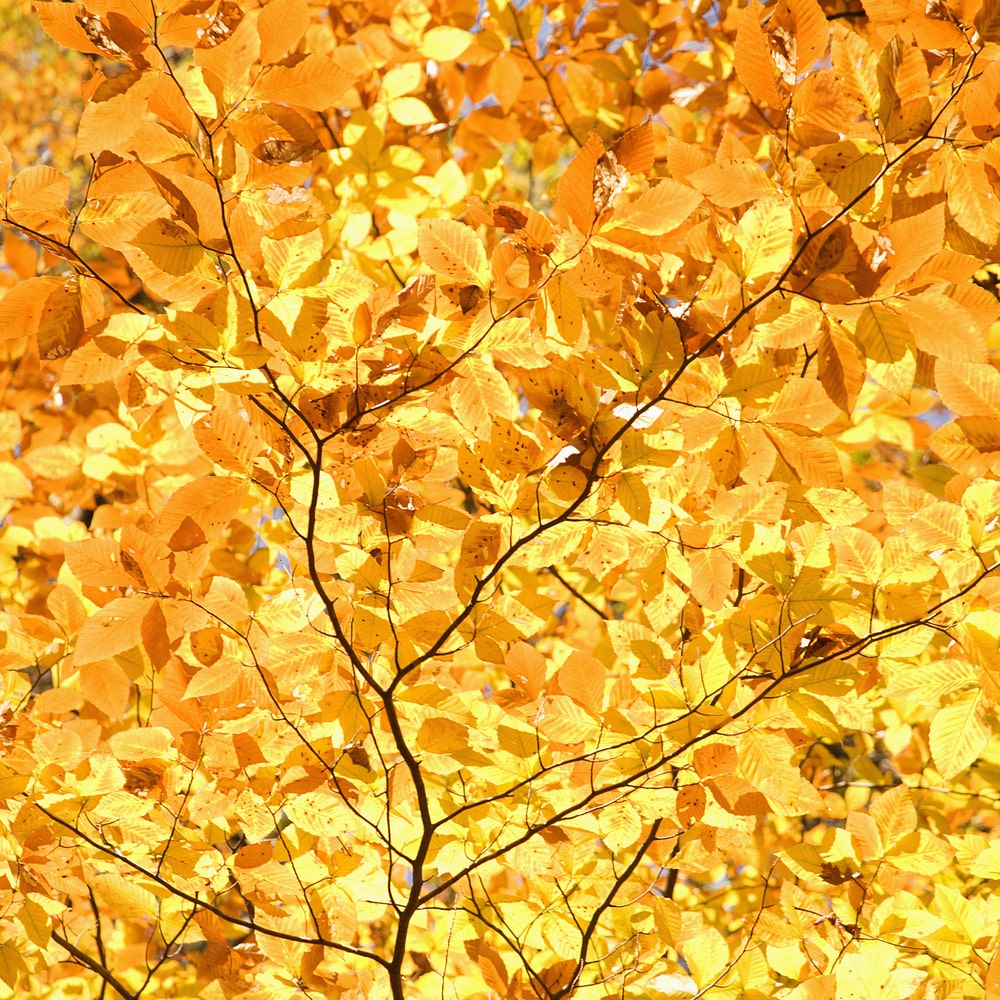 What are Other Types of Beech Trees?

All of these varieties look incredibly similar, so the confusion is understandable. The main difference is that the beech varieties from the north and south Carolina, and the varieties from central Mexico can tolerate more severe temperatures, and are resilient to drought. The American beech cannot survive those kinds of conditions.

Where do American Beech Trees Grow?

The reason why the American beech is called such is that certain parts of North America are the only place where they actually occur. They are very picky about their growing conditions, and the only places that have the right soil and the right amount of moisture are:

What are the Growing Conditions of the American Beech?

What do all of these places have in common? Well, they all possess forests that are in their final stage of ecological succession. This means that once a disturbance has occurred in a forest (like a forest fire), it will then change its forest composition in reply to that disturbance.

These forests will have moist and well-drained soil, that is quite high in acidity levels. All of the forests where American beeches grow are far enough away from urban pollution, salt, or soil compaction — beeches are extremely intolerant to those things. Usually, they can be found on slopes or rich bottomlands.

However, one thing that they are tolerant of, is shade. They don’t like it when an area is too hot. They are a very thirsty tree and don’t like too much competition. American beeches prefer to grow alongside yellow birches, eastern hemlocks, sugar maples, and they’ll often share canopy space with south magnolia trees.

The system that supports this tree is rather dense and shallow roots. That’s why it is integral that they receive enough moisture throughout the year because the roots don’t reach deep enough to grasp all of the moisture kept far in the earth. 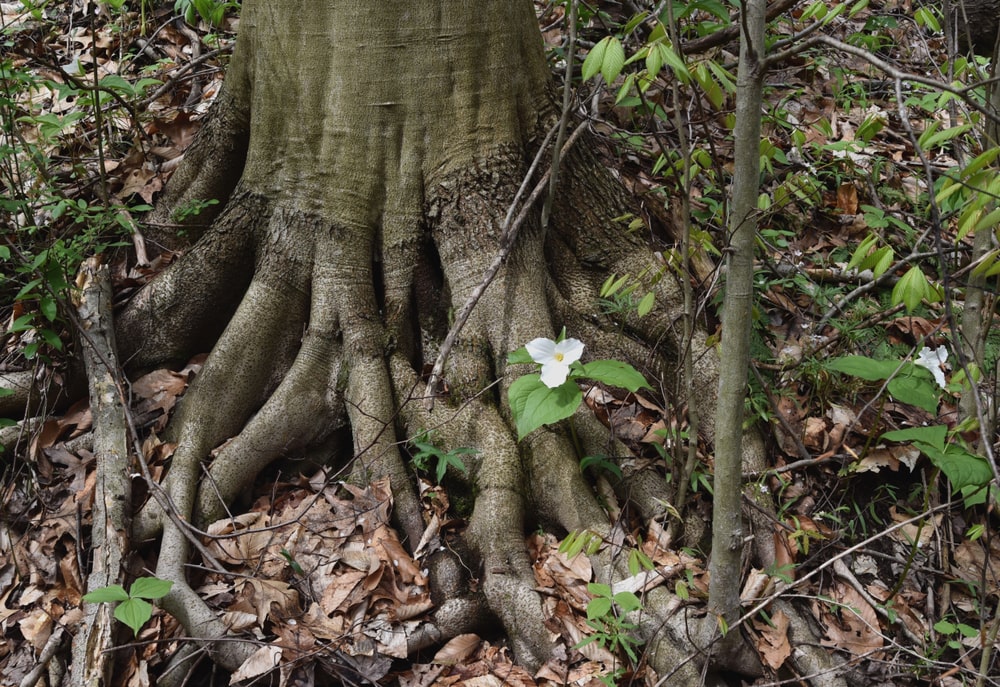 What is the Utilization of American Beech Trees?

Many forest-dwelling animals rely on the leaves and fruit of the American beech, as well other animals that are just passing through (including humans! Beech nuts are edible!) Along with many lepidopteran species (moths and butterflies), the list of animals that love to attend the beech bistro are:

For humans, considering that the American beech is not a super prevalent species, it is not a very common type of wood to use. Although beech wood is very hard, it is rather difficult to split, and it rots easily.

However, when steamed it becomes incredibly flexible, and folks who are into bentwood style furniture have beech as one of their chosen materials to use. Not only that, beech is a prime option for long-burning firewood as well. 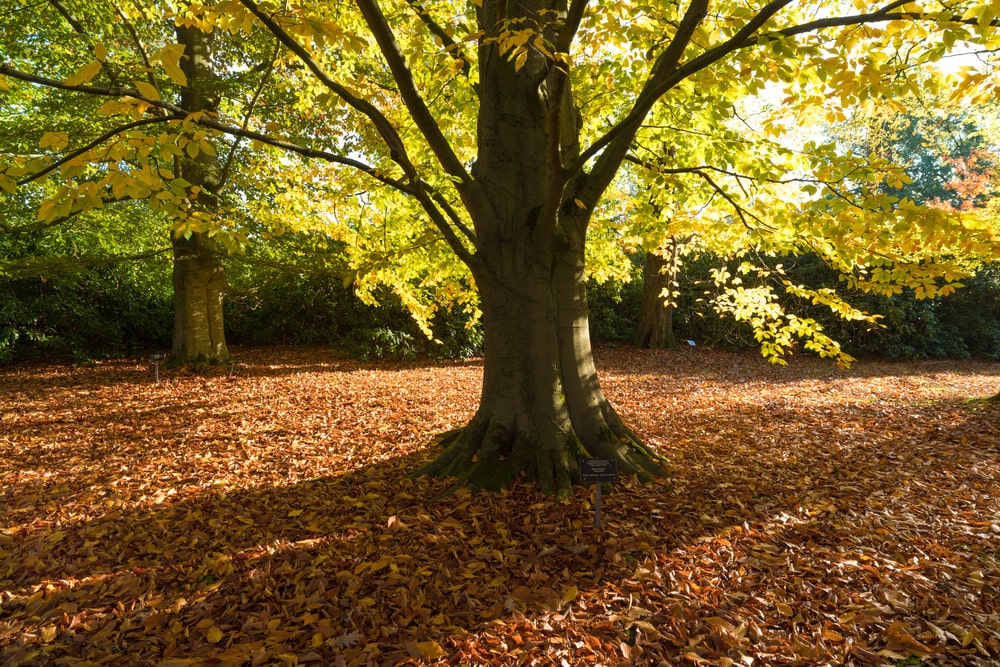 Curious about other types of wood? Check these out:

Do American Beeches have Pests?

Like all living things, the American beech also experiences little pests that wish to dampen their prosperity. There is something called beech bark disease that proves as a major killer to American beeches, but thankfully they are in the least concern category of Conservation Status.

Beech bark disease comes from a scale insect called cryptococcus fagisuga, or the beech blight aphid, that absolutely demolishes the bark of the tree until a wound is present (otherwise known as a beech scale). Once the protective bark is removed, the tree becomes extremely vulnerable.

This is when the nectria fungus gets involved. This mushroom will sporulate inside of the wound that the crpytococcus fagisuga created, and will essentially cause an infection in this wound until a canker develops, after which the tree will become more vulnerable to other pests and slowly die.

That was a rather depressing note to finish off, so here are some frequently asked questions about the life of American beech trees! 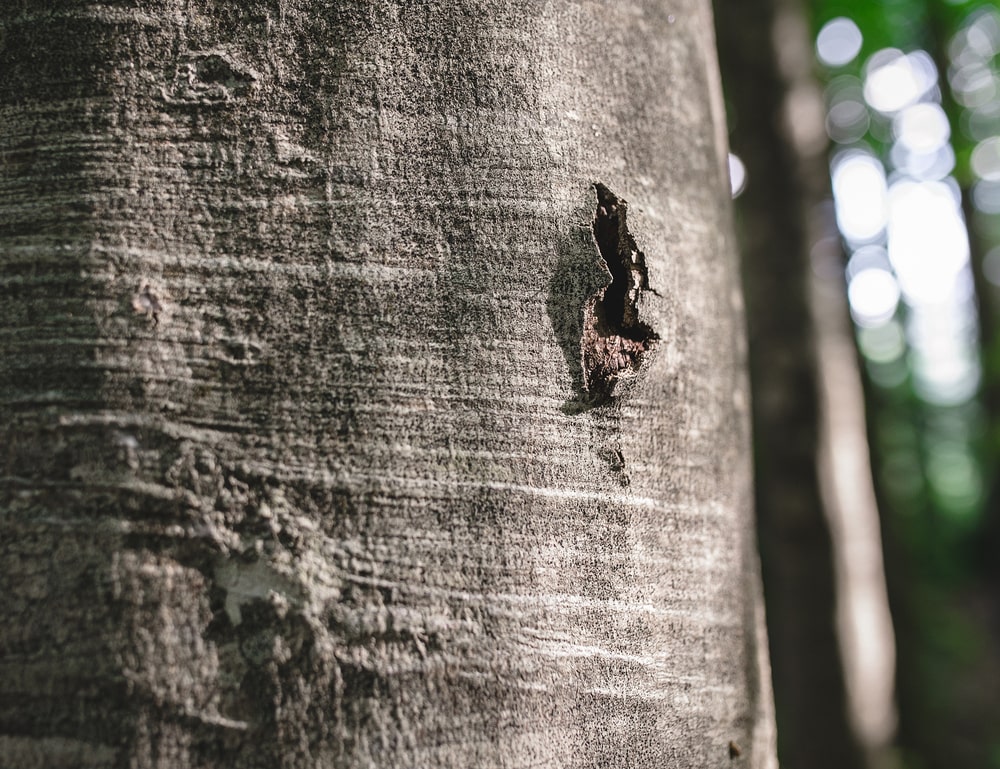 Does the American beech have an edible nut?

Yes, it does! Not only is it a popular food choice for many animals, but humans can also eat beechnut.

Is American beech a hardwood?

American beech is actually one of the hardest woods out there. So hard in fact, that it is extremely difficult to split and is the most workable when it is steamed. This is why beech is a popular choice of wood for people into bentwood furniture.

Yes! American beech is actually renowned as being one of the best, and longest burning firewoods.

American beech trees actually prefer shade. They do not grow in places that have too much sun. They can grow to the top of the canopy of a forest as long as there isn’t too much sun. If there is, they know to remain below the canopy.

Where are American beech trees located?

How do American beech trees reproduce?

Beeches reproduce in two ways: one by the dropping of seedlings, and two, by root sprouting. If an American beech has died or is injured, new saplings will sprout from the roots of that unwell tree. They will essentially be clones of the mother beech tree.

How do you identify an American beech tree?

The easiest way to identify an American beech is either by its very smooth and silver bark or by its winter buds that resemble long cigars.

What is American beech wood used for?

Humans use beech wood primarily in manufacturing bentwood furniture. It is such a hardwood that it is difficult to work with unless it is steamed, making it more flexible.

Cryptococcus fagisuga is the pest that is responsible for a disease called beech bark disease. This pest will eat away at the bark of the beech tree until a wound is present, where it will then be vulnerable to several fungi species that will infect the wound and kill the tree.

What biome do American beeches live in?

The biome in which American beeches live in deciduous forests.

What weather condition can the American beech tree tolerate?

Beeches are actually a rather intolerant tree, and they will only exist in regions that don’t get too hot or too dry. They prefer acidic soil, with not too much sun and lots of rain.

What pigments do American beech leaves have?

The color of American beech leaves is dark green.

How fast do American beeches grow?

American beeches are very slow growing trees and will only grow about 4 meters every 20 years. Once they reach maturity they will be at a height of anywhere between 20 and 35 meters.

There any many forest dwellers that each beach tree nuts. They are opossums, pheasants, raccoons, wild turkeys, foxes, black bears, white-tailed deer, squirrels, porcupines, and rabbits.

What is the size of the American beech tree leaves?

The leaves of an American beech tree are an average of 5 inches long with toothed edges.

How old can an American beech live to be?

The oldest American beech on record is 246 years old!

Are birch trees and beech trees the same?

Although they look similar with having pale wood and similarly colored and shaped leaves, birch trees, and beech trees are entirely different species.