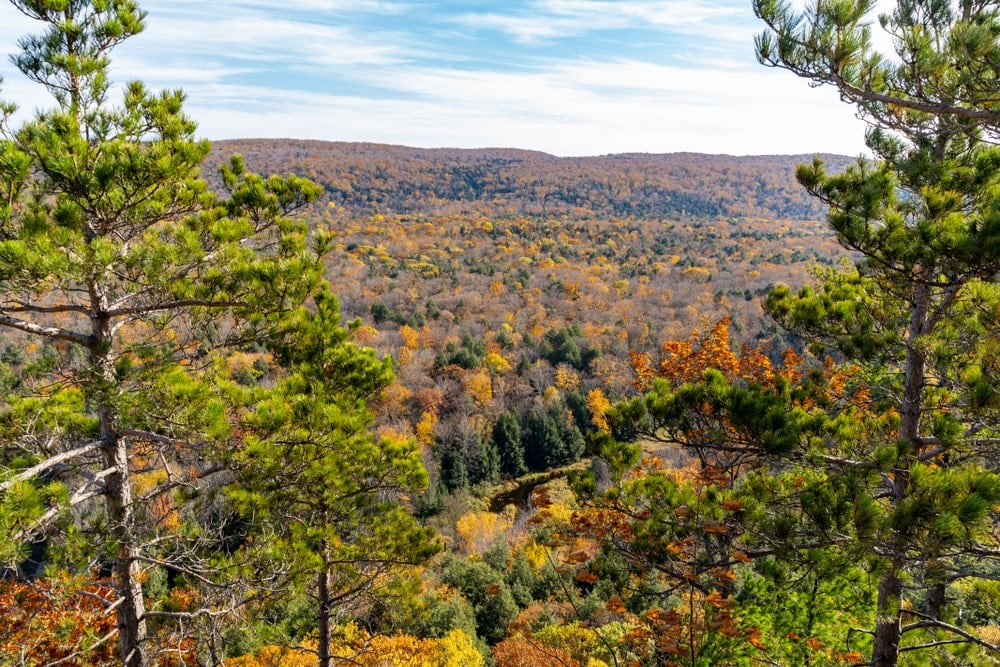 The American basswood tree is a proud member of the Malvaceae family, and it is the only representative of this genus within the western hemisphere. All other members occur in Europe, Asia, and Russia.

This large deciduous tree has an average 200-year life expectancy, which makes them a proud member of the old-growth community. Trees that exceed 120 years are old-growth trees.

Basswoods are known for their fragrant flowers, as bee trees, and as one of the most important members of the North American hardwood forest. If you’re curious about other types of trees, head on over to 101 Types of Trees from around the world!

Basswood trees live in areas with some extreme weather, and so they develop very deep root systems to ensure their survival and safety. These roots are very thick and large, they grow laterally and wide-spreading as well as deep into the earth.

American basswoods are medium to large trees, and they can obtain heights of up to 37 meters if they grow in ideal conditions. They will also have very thick trunks to support that height, sometimes achieving a trunk diameter of 1.5 meters. 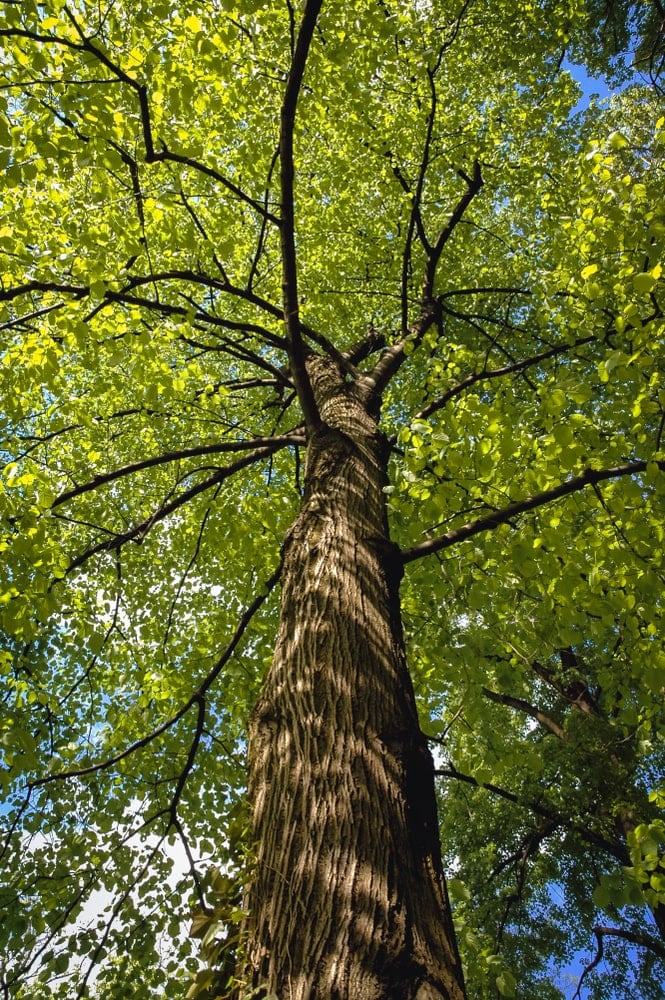 American basswoods have wide-spreading branches that droop pendulously, created a very domed and rounded crown. The crown is denser near the top of the tree and airier near the bottom of the tree.

A smooth red/green twig bears alternately arranged basswood leaves. A basswood leaf is simple, with an ovate to cordate shape (ovular or heart-shaped with a wide base). They are often asymmetrical, and quite large, ranging from 10-15 inches long with a serrated margin.

The leaves start out as smooth deep red winter buds. They open as a downy pale green leaf, which then comes a dark green with a very shiny and smooth surface. In the fall before the leaves drop, they will turn a light yellow color.

Both the twigs and leaves of the American basswood tree contain mucilaginous sap, which is a great source of nutrients for animal and insect life, and it is also digestible for humans! Leaves emerge in mid-spring and require a day’s length of 14 hours to do so. This will vary based on how southern or northern the tree is growing.

How do American Basswood Trees Reproduce? 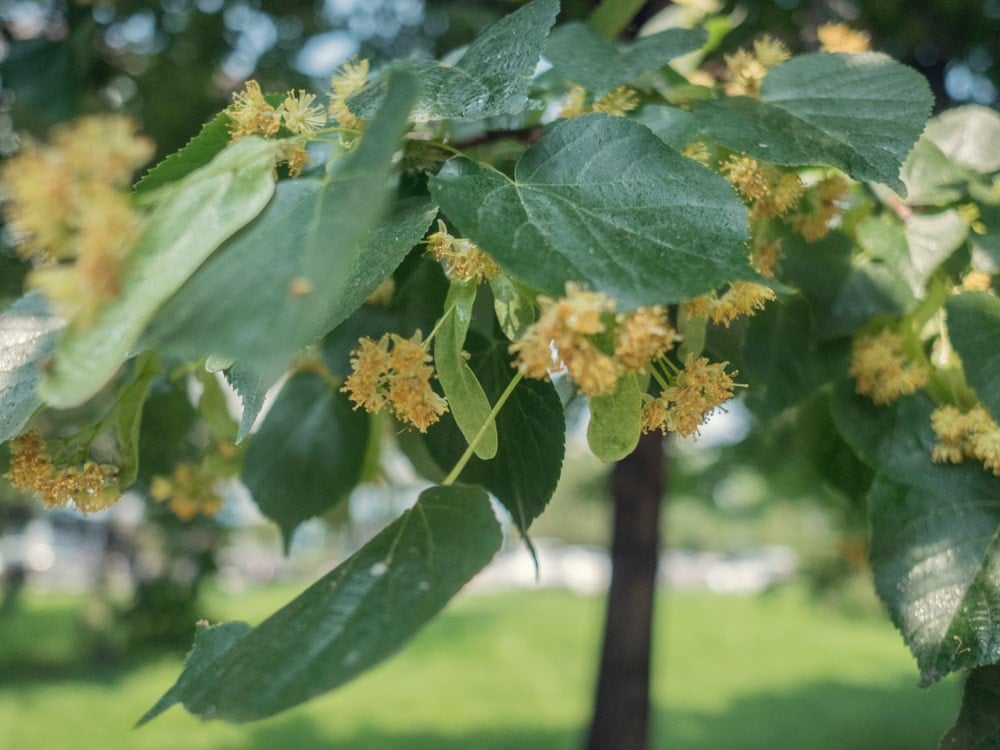 American basswood flowers are very small and fragrant, and they are insect-pollinated. They are arranged in drooping clusters and they have perfect petals and numerous stamens. Their fragrance is very strong to help attract pollinators.

The flowers have a white/green leafy bract (specialized plant part for reproductive purposes) that acts like wings to help distribute seeds. Bract wing-like parts will bring the seed to the ground like a helicopter.

A flower will usually bloom in mid to late spring, though this depends on its growing range. They require a day length of 14.5 hours in order to bloom, and so this may occur at different times of the year depending on how south or north they grow. 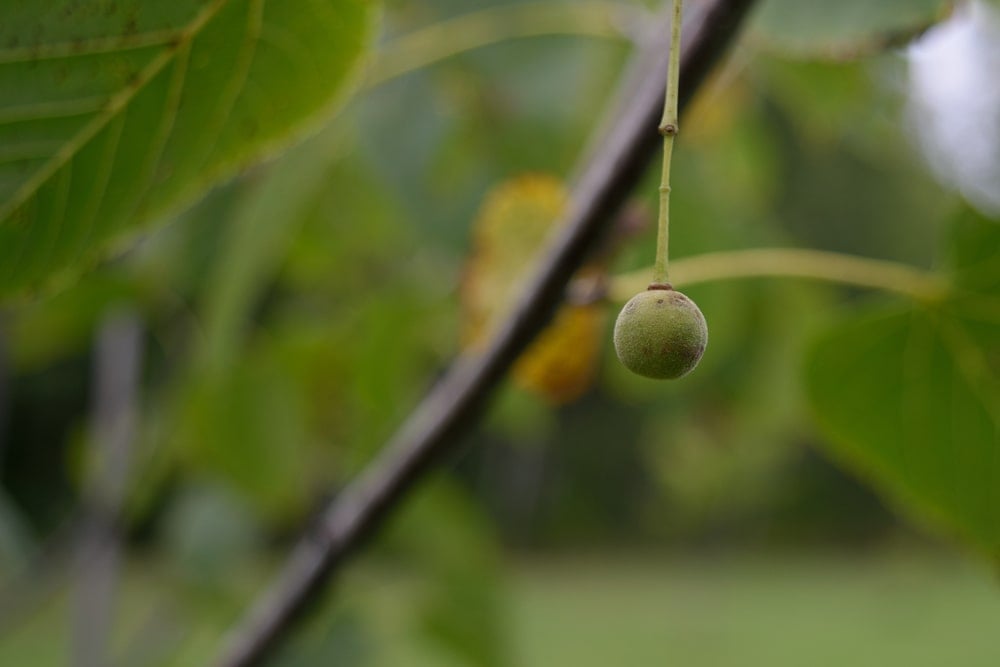 Once a tree is successfully insect-pollinated, it will produce fruit in the form of a small nutlet. These nutlets are small, dry, and cream-colored. These nuts are eaten by chipmunks, mice, rabbits, and squirrels, which help with dispersal and they provide a perfect capsule of fertilizer (poop!).

Though only 30% of basswood seeds are viable for germination. They develop a very hard seed coating that can delay germination for up to 2 years if it is not first digested by small mammals or birds.

American basswood trees can reach sexual maturity and start producing seeds as early as 8 years, though it more commonly occurs after 20 years. They will produce very productive seed crops for the first 100 years of their life, and that will slow significantly afterward.

What Are Some Other Types of Basswood Tree? 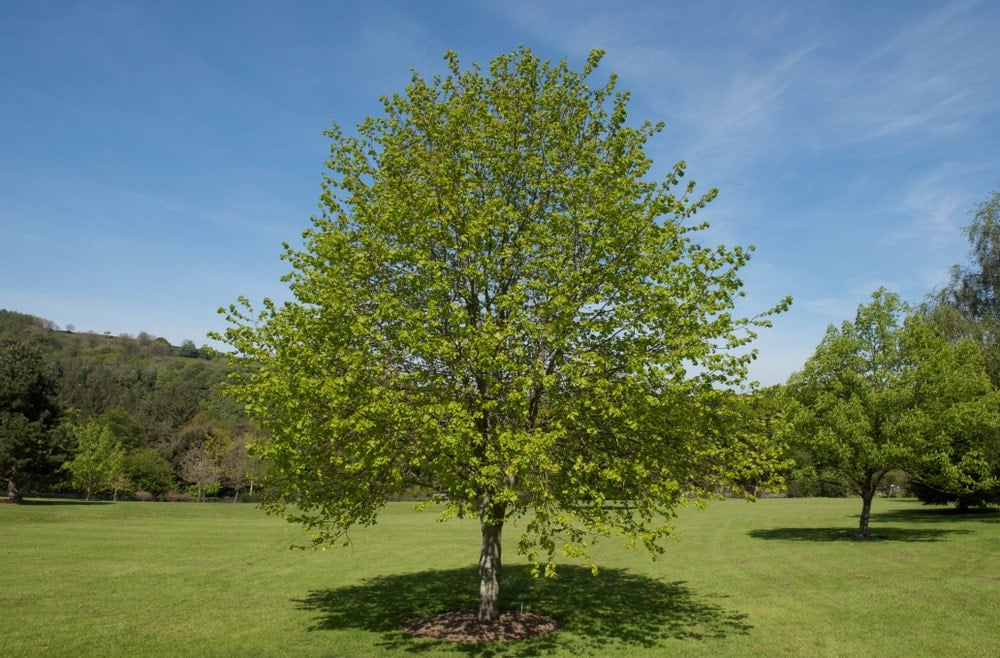 Also referred to as a small-leaved lime tree, this species of tilia is native to countries in Europe, and their growing locations are restricted to very high elevations. 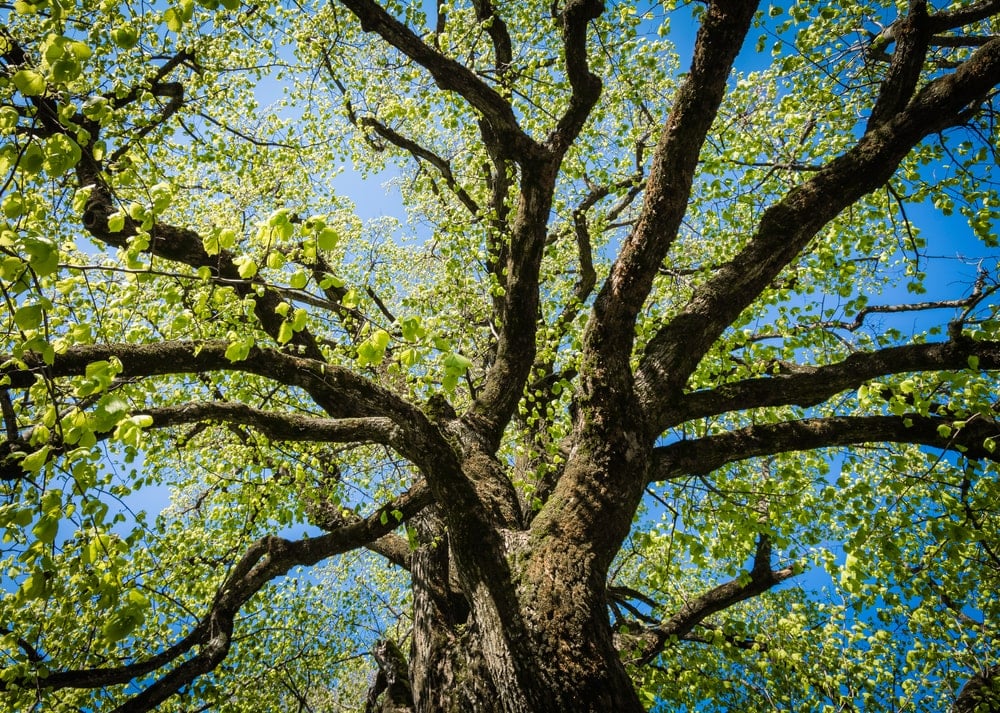 Also referred to as a large leaf lime tree, this species of tilia is native to Europe and is especially prevalent in Great Britain. They occur in very lime-rich soils, which is where the nickname “lime tree” may have originated. 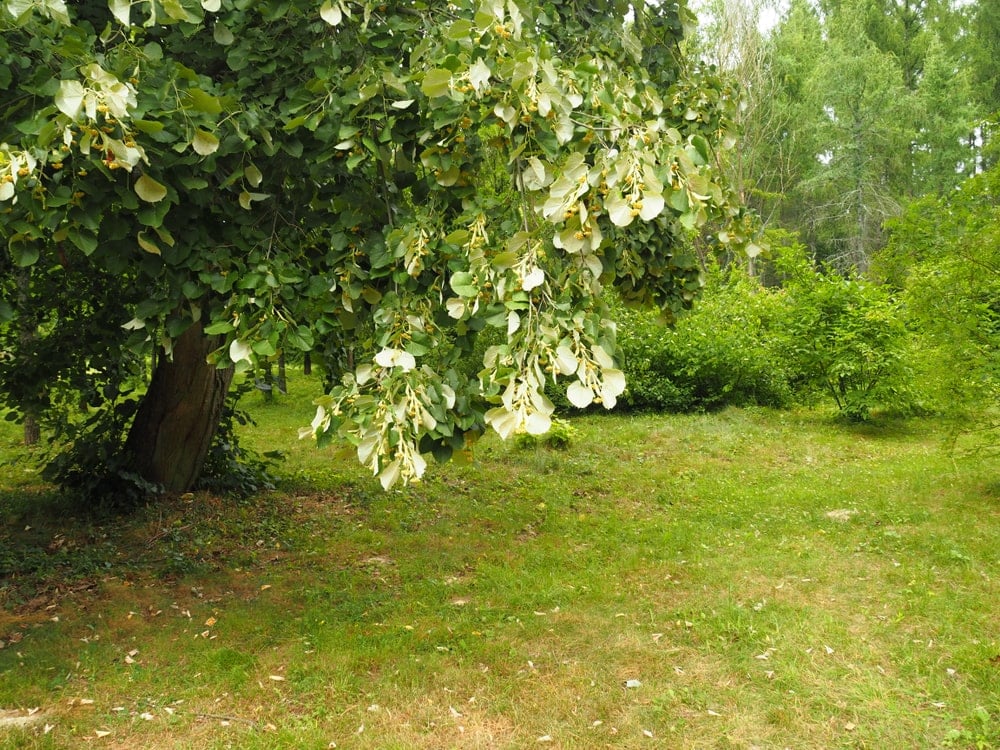 This species of tilia is a very large variety and can reach heights of 35 meters. They are native to certain parts of Asia, Romania, and Turkey in moderately high altitudes.

Sometimes referred to as white basswood, this species of tilia is native to the southeastern United States and Mexico. They are moderately large with very large leaves.

Japanese beetles live beneath the soil and can cause damage to plants because of their over-eating habits. These beetles are an invasive species and therefore do not have many natural predators. Their overgrazing of leaves can greatly diminish a plants’ ability to photosynthesize.

Powdery mildew is a fungal infection that causes damage to many types of plants. It occurs when a plant is waterlogged or isn’t properly aerated, which is caused by foliage that is too densely packed. Water gets trapped between leaves and the first symptom of powdery mildew is leaf spot.

Yellow leaf spots will eventually seep into the twigs, branches, and the remaining members of a plant if it not dealt with quickly. Though it isn’t particularly lethal, it is a huge nuisance for commercial harvesters.

Where do American Basswood Trees Grow? 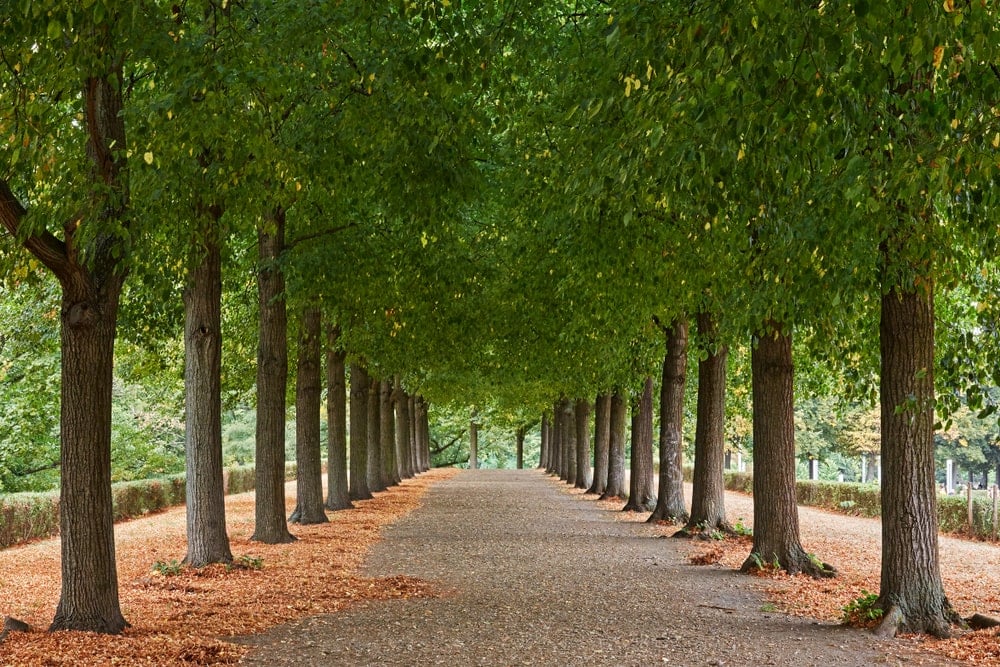 American basswoods are the only representative of the genus tilia in the western hemisphere! They from Canada from Manitoba, to Quebec, all the way to New Brunswick. In the United States their growing range spans across Oklahoma, South Carolina, Nebraska, Wisconsin, Minnesota, and New England.

What are the Growing Conditions of the American Basswood Tree?

American basswood trees prefer to grow in soil that is mesic with a high pH level. Soil should be well-drained, and not too moist.

These trees can tolerate drought and much sun exposure. They are most commonly found at high altitudes with ample sun exposure and develop deep roots in order to deal with these conditions.

How are American Basswood Trees Used? 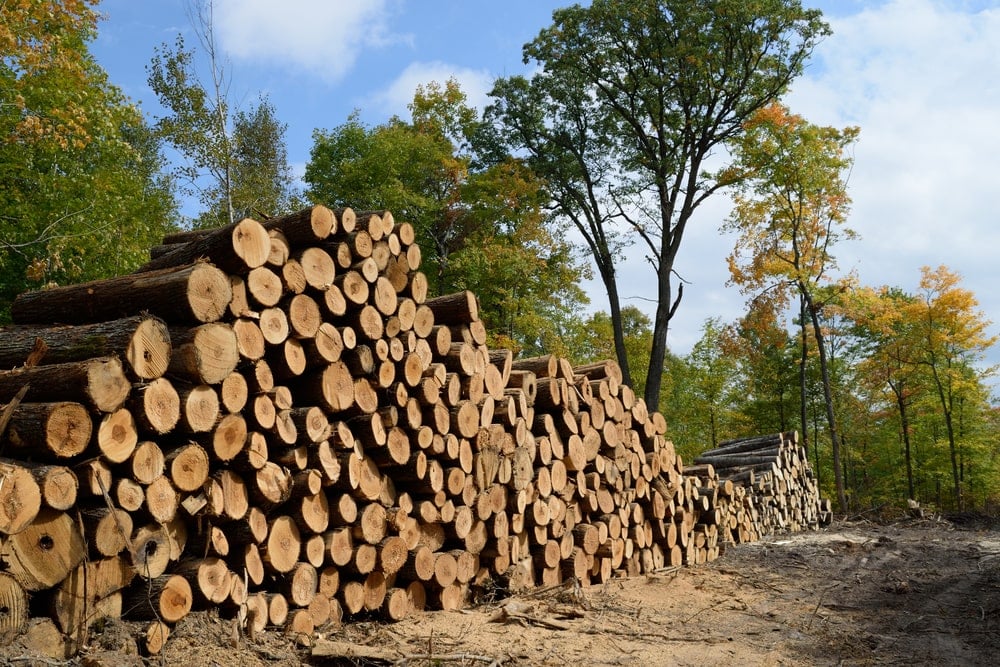 American basswood is pale brown, white, or light red. It has a very nice fine close grain that is clear of knots, though it is not very easy to split. It is very strong though is very inflexible.

It takes stain and polish well, and it often used for cheap furniture and other woodenware. It is a very popular choice for wood carving and used to be the prominent choice for carriage making.

Dried linden flowers have traditionally been made into linden tea. This tea is taken medicinally for not only a pleasant taste and soothing effect, but it contains flavonoids and volatile oils. This comes from the mucilaginous sap present in leaves and twigs.

The medicinal properties are said to reduce inflammation and are taken to help relieve colds, coughs, fevers, headaches, and muscle pain.

American basswood trees are also used in the honey tree. Honey bees that visit basswood trees will go on to produce a very unique, mildly spicy flavored honey from the basswood flowers. 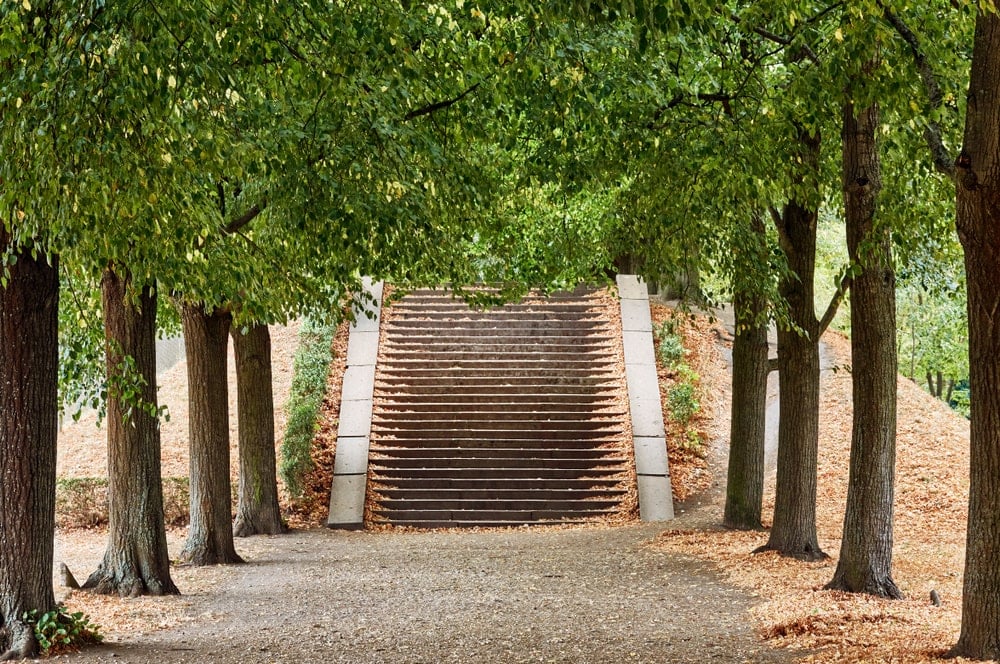 American basswood trees are often planted ornamentally for their attractive fall colors, and mass foliage, making them a wonderful shade tree. They are commonly planted on the windward side of an orchard to help protect more delicate trees.

What is the diameter of an American basswood tree?

The trunk of the American basswood tree will usually reach a diameter of 1.5 meters. Depending on their growing location, the height and trunk size will vary.

What is the height of an American basswood tree?

American basswood trees if they grow in ideal conditions, will grow to be up to 37 meters tall! Though it is more likely for them to hover around heights of between 25 and 30 meters.

What is the scientific name for an American basswood tree?

The scientific term for American basswood trees is tilia Americana. They are part of the botanical plant family Malvaceae.

How can you identify an American basswood tree?

American basswood trees are most easily identify from their heart-shaped leaves. They have a fine-toothed margin and a short sharp point. They can also be identified by the fragrant yellow flowers.

American basswood seeds when released will fly to the ground like a helicopter, thanks to their leaf bracts that act like wings.

What wood is similar to basswood?

Basswood has similar wood to both maple trees and ash trees. Though the wood of ash trees and maple trees tend to be far more durable, flexible and valuable, they all share similar light-colored sapwood.

Are linden trees and basswood trees the same?

Depending on where they are growing, basswood trees are also called Linden trees. They are called such outside of the western hemisphere. They are all part of the Tilia genus but are different species. Though sometimes the American basswood is also referred to as an American linden. Additionally, basswood flowers are called linden flowers.

Like all wood, basswood burns quite well. It is quite dense and close-grained, meaning that it can hold a high heat capacity and will burn quite slowly. However, basswood trees do contain quite a bit of sap and will produce some strong-smelling smoke.

Is basswood good for guitar making?

It is said that basswood has very good resonant qualities, and is a good choice for guitar manufacturing. Though not as popular as other types of wood, it is an option for more affordably priced instruments.

What is the lifespan of an American basswood tree?

American basswood trees can live to be upwards of 200 years old if they are in the ideal growing conditions. However, they are a lot of factors that may prevent them from getting that old, like forest fires, diseases and pests, and logging.

How do you prune a basswood tree?

Tree pruning is entirely up to the preference of the landowner, as a tree does not need the help of a human in order to grow properly. If you are intent on pruning, it is best to avoid pruning in the fall or winter, and the tree is likely to bleed sap throughout the entire season and create a huge mess.

Otherwise, it is best to reserve pruning for branches that appear as being sick (like with powdery mildew) or if it growing at an awkward angle and interfering with other branches.