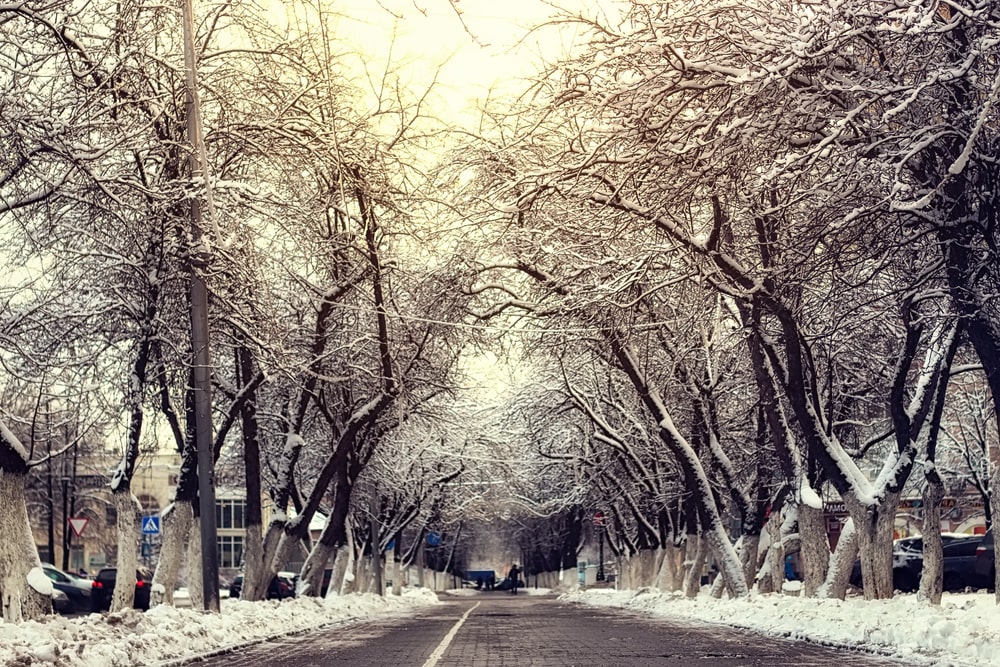 Out of all the types of field elms out there, the slippery elm is one of the weirdest. This unique tree has a goopy inner bark, can grow in almost any kind of soil and is significantly more resistant to diseases than its cousins.

Slippery elm bark also has several medicinal properties that other members of the Ulmus genus do not have. Keep scrolling to learn all about Ulmus rubra, or head over to 11 Types of Elm Trees to acquaint yourself with the other kinds. We’ve also got you covered with 101 Types of Trees to keep your learning alive!

Sometimes referred to as a red elm, gray elm, soft elm, moose elm, or Indian elm, the slippery elm gets its name from its inner bark that is both mucilaginous (slippery) and red (rubra). For the first years of having an identity, the slippery elm was misinterpreted as being an American elm tree, before it was classified as its own species in 1793.

It very closely physically resembles the American elm, though it is more closed related to the European wych elm (ulmus glabra). One of the smaller varieties of the genus ulmus, this is a deciduous tree that can grow to 200 years old, making it part of the old growth community. 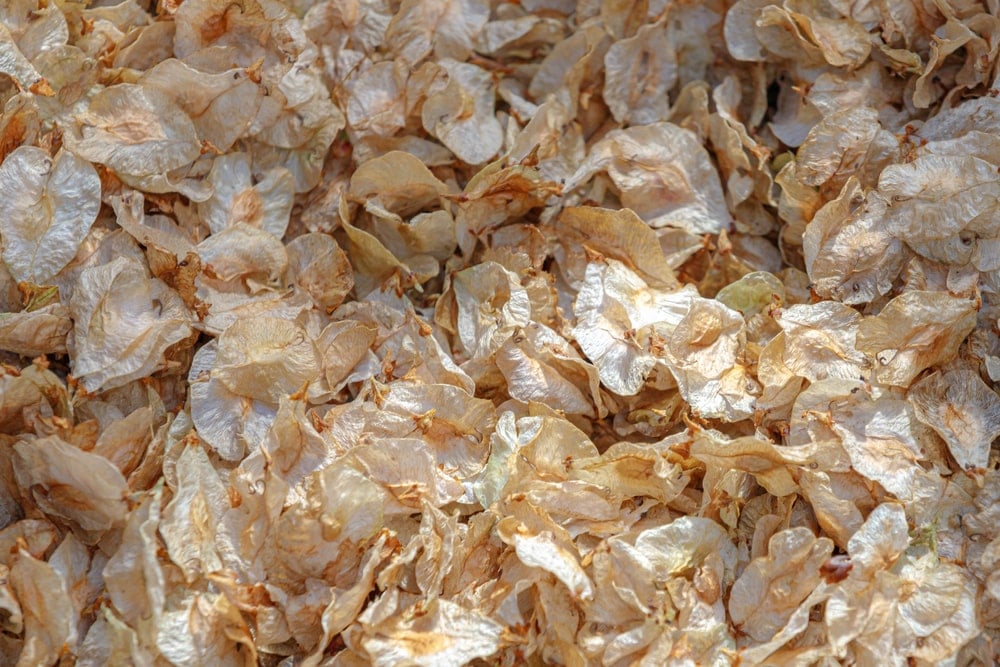 Slippery elms are a medium tree, growing to be an average of 12-19 meters tall, but can occasionally reach a height of 30 meters. They possess gurthy trunks to support their height. The largest slippery elm on record lives in Louisville Kentucky, and is 27.4 meters tall, with a trunk diameter of 7.16 meters, and a canopy that spreads to 25.8 meters.

Slippery elm branches tend to grow out rather than up, making this variety an excellent shade tree (then again, most elm trees are). Slippery elm outer bark can be a range of brown to red to gray in color, and is decorated with shallow grooves and long ridges.

The inner bark of a slippery elm is probably the most notable thing about the tree, as it has traditionally be used for medicinal purposes. The inner bark, or “heartwood”, is a deep red (where the tree gets its nickname “red elm”) and is covered with a mucilage sap (where it gets its name “slippery”). A slippery elm twig a stout and covered in a pubescent downy substance.

At the end of these downy twigs, the foliage of a mature tree will have an oblong to obovate leaf shape, and are around 4-8 inches long. A slipper elm leaf will be rough on the top surface, but velvety smooth on the bottom surface. The leaf margins are double serrated and coarse. They emerge with a red hue, eventually fade into a deep green in the summer, and fade to a dull yellow by the fall. 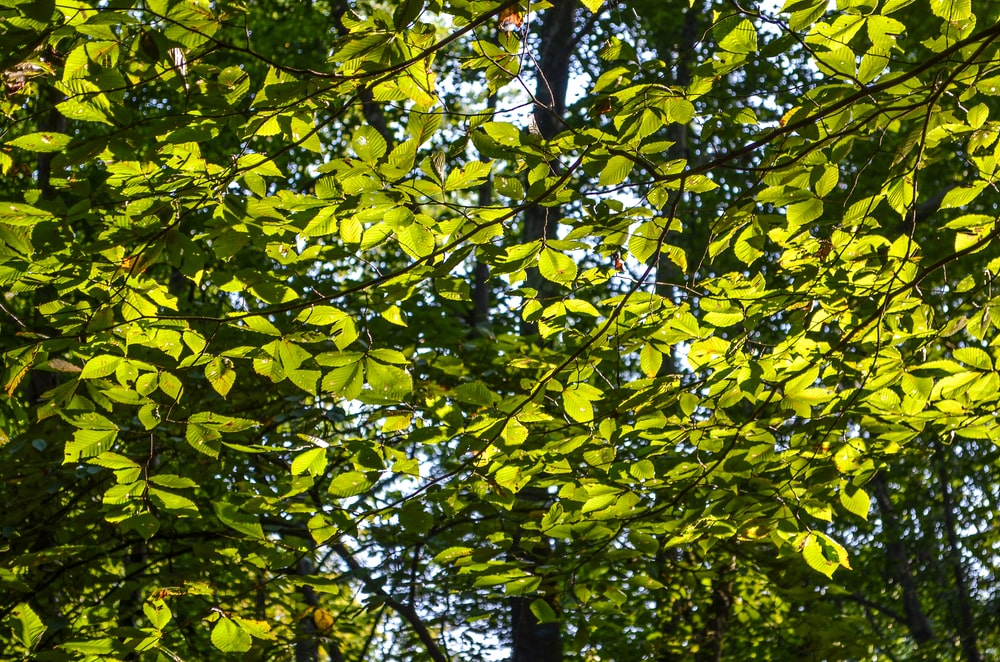 How do Slippery Elm Trees Reproduce?

A slippery elm flower is apetalous (without petals) that sometimes bloom as early as March, and always emerge before the spring foliage does. This is because slippery elms are wind pollinated, and the chances of pollen reaching a flower thanks to a blustery March wind is more likely without leaves in the way.

The flowers are strange looking fuzzy haired bristles instead of petals, that are a rusty brown color. They grow in short and tight clusters with around 10-20 stems per cluster.

Once a flower is successfully pollinated, it will produce a fruit that is an oval winged samara. It is a reddish-brown color, and is orbicular in shape. The samara will contain one single centrally located slippery elm seed that is covered in the same color of hairs. 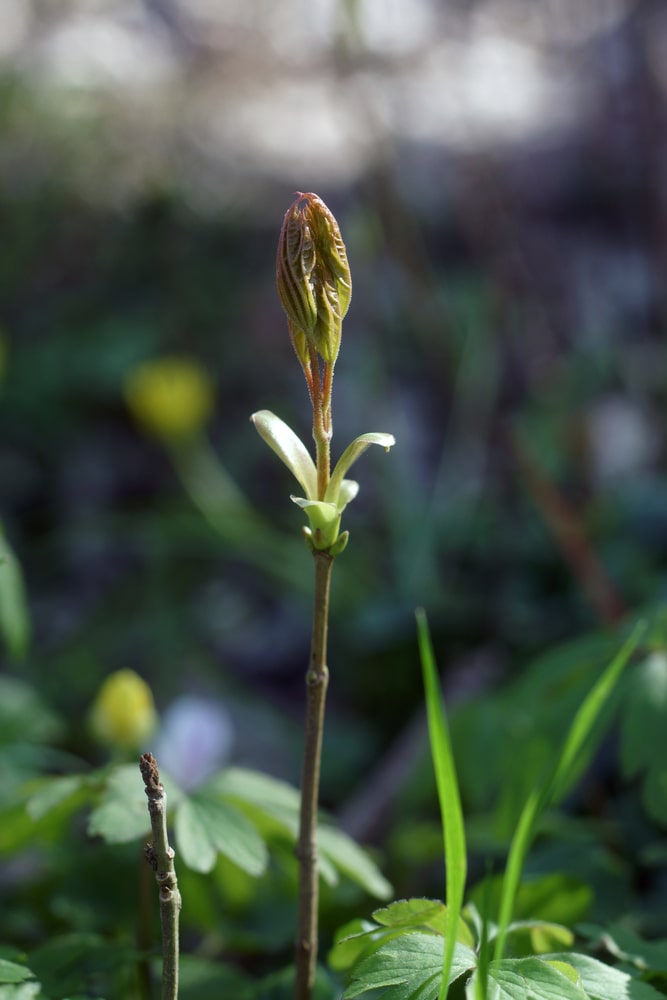 Dutch Elm Disease is an infection that has affected a great population of field elm species, and it is caused by a sac fungus (ophiostoma novo-ulmi). The infection is spread by various types of bark beetles. The elm leaf beetle (xanthogaleruca luteola) is not only a vector of the disease, but makes matters worse by nibbling too generously on elm foliage.

Another mentionable pest that elm trees have to deal with is called elm yellows. It is a plant disease than effects elm trees, and is also known by the name elm phloem necrosis. There is unfortunately no known cure, and is severely spread by leafhoppers. 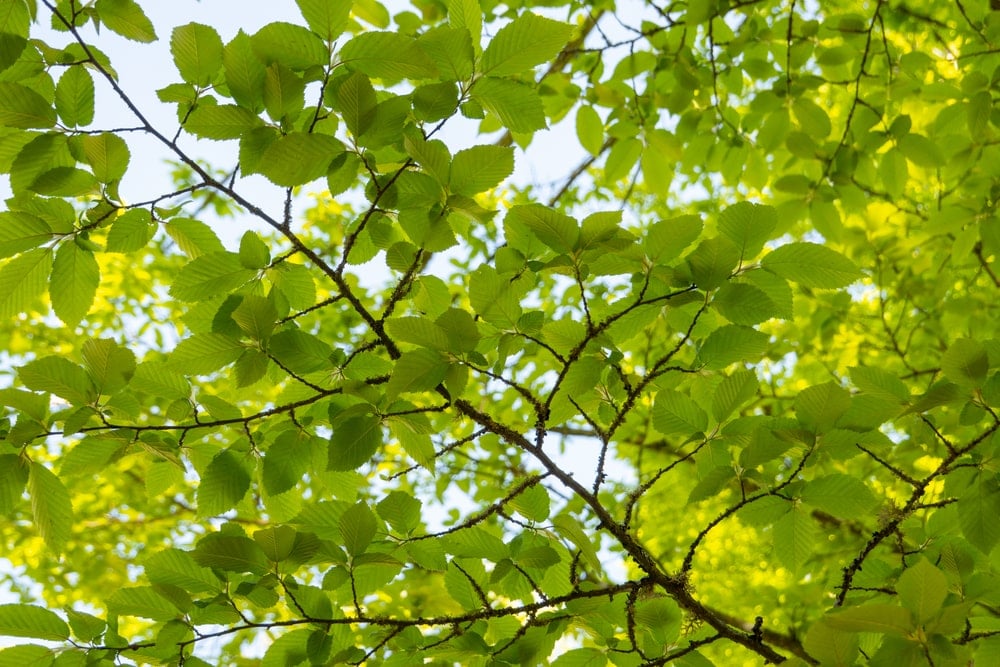 Where do Slippery Elm Trees Grow?

Native to mostly eastern North America, the slippery elm grows naturally from east Texas to south Florida, from southeastern North Dakota to eastern Maine, and up into southern Quebec in Canada.

Cultivars have been planted in many more states, including Vermont, Wisconsin, South Dakota, Oklahoma, Ohio, New York, and many more. It can also be found in certain parts of Ontario and in the Maritimes of Canada.

What are the Growing Conditions of Slippery Elm Trees?

The slippery elm enjoys full sun exposure with partial shade, making it so that it can’t really compete in tight forest canopies due to its shorter height. It thrives in moist uplands where there isn’t much competition.

This medium-sized tree can tolerate a great variety of soil types but will grow best in soil that is alkaline and moist, but can also tolerate very dry soils. It prefers soils that have eroded from limestone.

In more dry soils, a woody taproot root system that grows deep down, in order to access water that is locked deep in the soil. This is a root system that certain elms have in common with carrots!

If a slippery elm is growing in moist soils, it will have a root system that is more shallow and wide-spreading, but will still follow wherever the greater water access is. 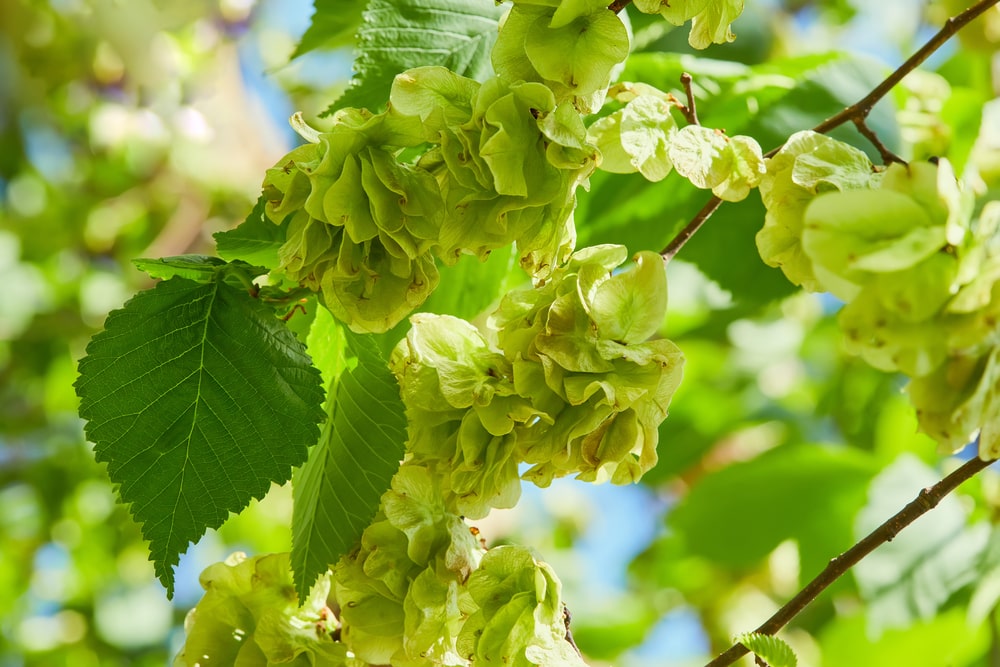 How are Slippery Elm Trees Used?

Unlike most other field elms, the slippery elm isn’t commonly used as an ornamental tree. It is more recognizable for the medicinal properties of its inner bark, and for the useful fibrous heartwood.

Slippery elm inner bark is edible and mucilaginous, and its medicinal uses have been approved by the United States Food and Drug Administration. It is commonly made into a soothing salve as a demulcent, or it is dried up and ground into a powder. From here, the powdered bark can be made into salves and balms to apply topically, or into slippery elm tea to be ingested. Slippery elm lozenges are also a popular way to ingest its wonderful medicinal properties.

An interesting and unexpected used of slippery elm inner bark is by baseball players. What is now considered as foul play, pitchers would chew on the bark and create a very slippery and slimy spit that they would then rub on the baseball. This slimy coating would improve their throw and the curve on the throw. How weird!

Slipper elmwood is considered to be unimportant in the timber industry, but thanks to its fibrous inner bark, it produces a very durable and flexible material that can be used for a great many things. It has been used in the manufacturing of fence posts, rails, and archery bows.

This fibrous material can also be spun into threads, twines, and ropes. This makes it very useful for creating bowstrings, certain musical instrument materials, snowshoe bindings, mats, and jewellery. 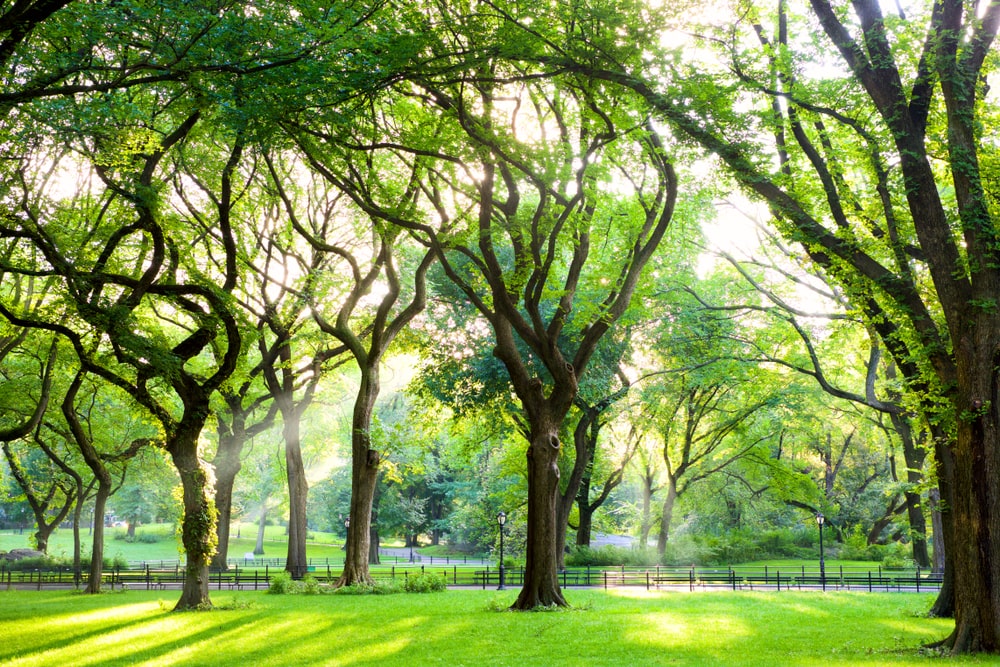 How do you identify slippery elm trees?

The easiest way to identify a slippery elm tree is by peeling back a few layers of bark. The reason why the slippery elm gets that name, or its nickname “red elm”, is because of its inner bark. The inner bark is very mucilaginous and a dark red color.

Otherwise, slippery elm leaves tend to be larger, and with a coarser leaf margin than other types of elm trees. This tree will also grow less tall than most other elm trees.

Where can you buy slippery elm powder?

What is slippery elm bark used for?

Slippery elm bark has been used traditionally and in modernity as a medicinal property. It is often made into powders or salves to be used as a minor irritation soother, or for a great variety of inner issues. These can include coughs, sore throat, intestinal discomfort, and many more. Check out WebMD for more details.

The slippery elm is considered as a moderately fast-growing tree and will grow anywhere from 1-3 meters a year. This may seem like a lot relative to other species of trees, but the American elm tree can grow up to 5 meters in a year.

Slippery elm trees are some of the shorter of the elm species, and will grow to be an average of 15-20 meters, though it does occur that some trees who live in extremely ideal conditions can grow to be around 30 meters tall.

Due to the Dutch elm disease, elm trees rarely have the chance to live their full lifespan. The slippery elm has a life expectancy of over 200 years, putting it in the community of the old-growth forest.

The root system of a slippery elm tree all depends on the soil that it grows in. If a tree is growing is rather dry soils or areas that are prone to drought, they will develop a woody taproot system that grows deep into the soil.

If a slippery elm is growing in perpetually moist soils, it will develop a root system that grows rather shallowly (less than 1 meter in depth) and will be wide-spreading.

How do you tell the difference between ash and elm trees?