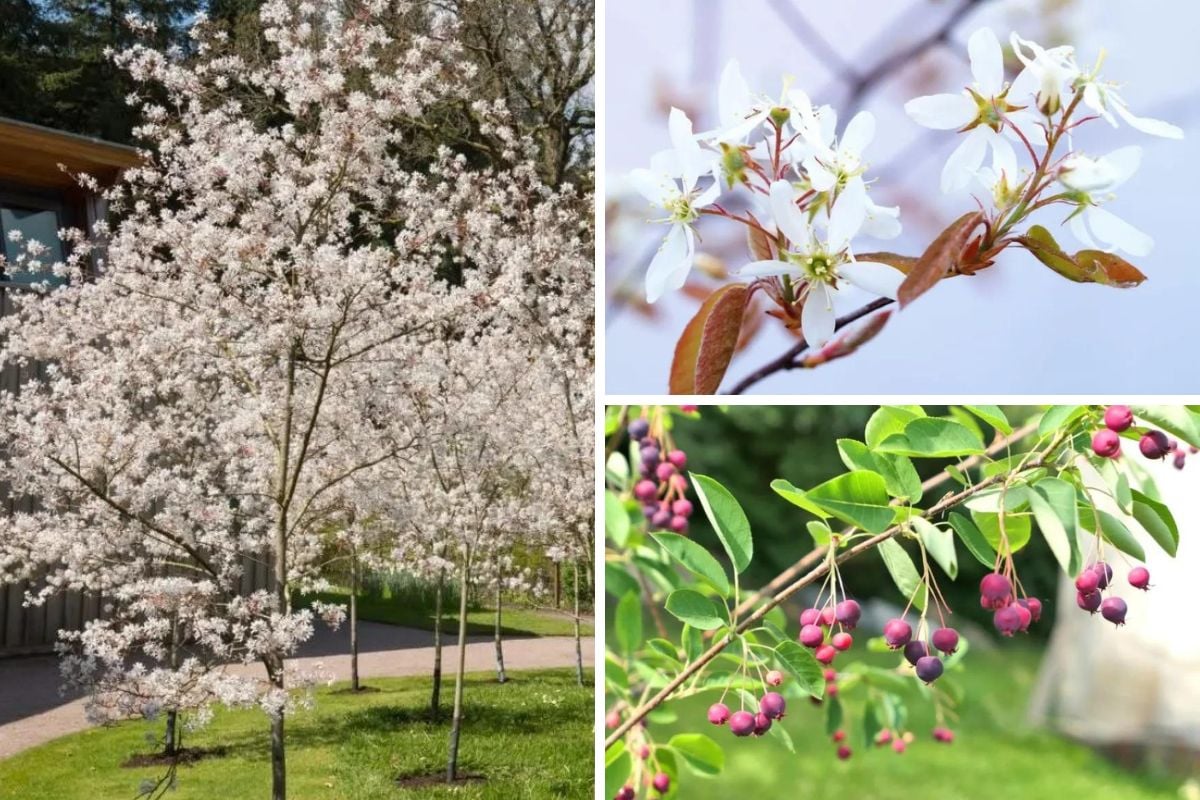 Part of the genus Amelanchier, the serviceberry tree is well known for many reasons. This small tree is a beautiful and easy cultivar tree, it has edible fruit, beautiful flowers, and is very easy to care for.

A native plant to all of Canada and the United States, it makes an incredible addition to all landscapes. If you’re interested in other Types of Fruit Trees, or 101 Types of Trees from around the world, we’ve got long lists and details covering all kinds!

The serviceberry tree is one of those types of plants that goes by a silly amount of different names. In Canada, they are referred to as the Canadian serviceberry, shad tree, or the Saskatoon berry tree (Saskatoon, Saskatchewan is actually named after this tree). In America, they are called a sarvisberry tree, shadwood, juneberry, sugarplum, and chuckle-berry, or currant-tree.

Serviceberry trees are part of the rose family (Rosaceae) that consists of 20 species of deciduous shrubs and trees. They are rather small trees that are usually planted ornamentally, thanks to their lovely spring flowers and attractive shape.

These autumn brilliance serviceberry trees are also well known for their fall color, and they can be found in nearly every single state, province, and territory in North America.

What is the Etymology of the Serviceberry Tree?

Depending on where you are in the world, the serviceberry tree goes by a slightly different name. For the purposes of this article, we’re going to stick to a common name, serviceberry, to prevent confusion, but it is worth it to learn about where these different names came from!

What Are Some Other Types of Amelanchier Species? 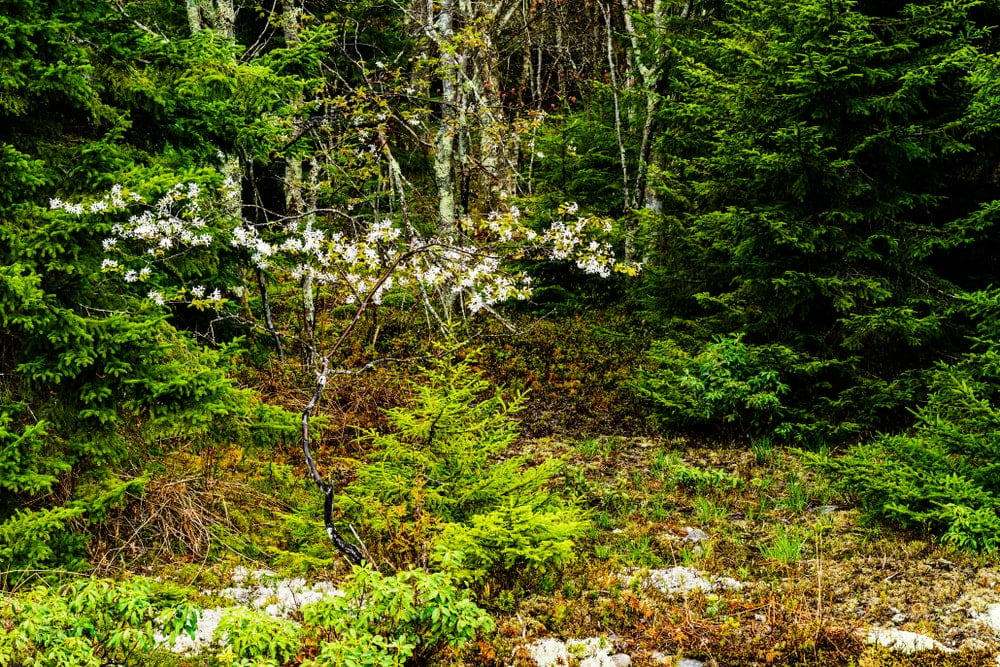 This variety of trees is native all over eastern North America, from the Gulf Coast to Thunder Bay in Ontario, to Lake St. John in Quebec, southward to Texas and Minnesota. They are characteristically different based on their downy leaves that remain so throughout maturity. They are also referred to as the common serviceberry. 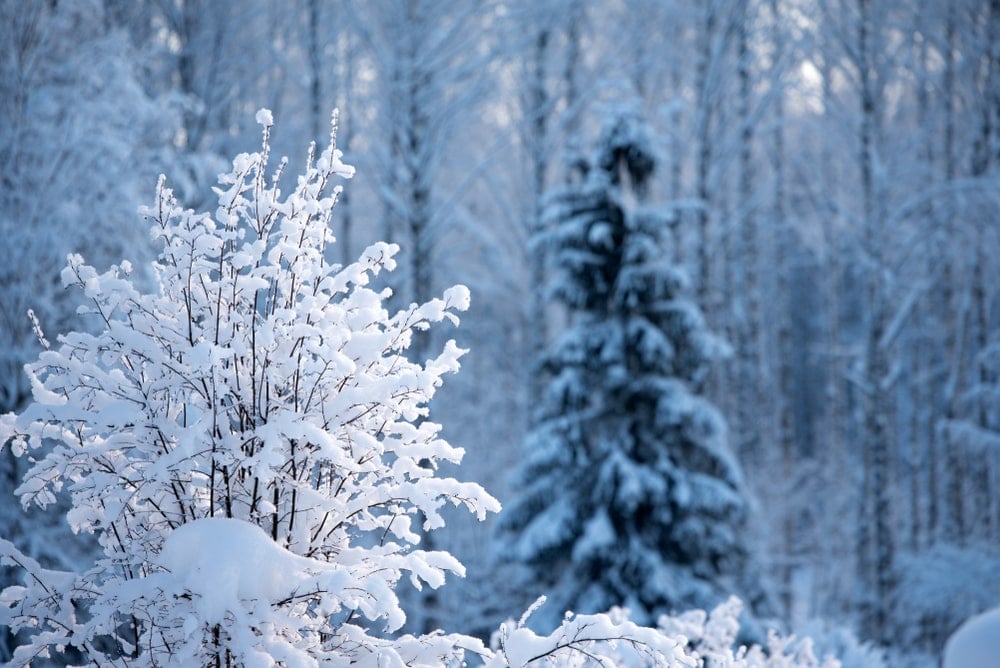 This variety of trees is native to eastern and central North America, starting in Newfoundland and Ontario in Canada, down to Minnesota, Iowa, Georgia, and Alabama. They are characteristically different based on their very smooth and shiny leaves that have been used as herbal medicine.

This variety of trees is native to western North America, all the way from Alaska, down throughout British Columbia, and into the west coast of America. They are also sometimes called apple serviceberry, dwarf shadbush, or pigeon berry. 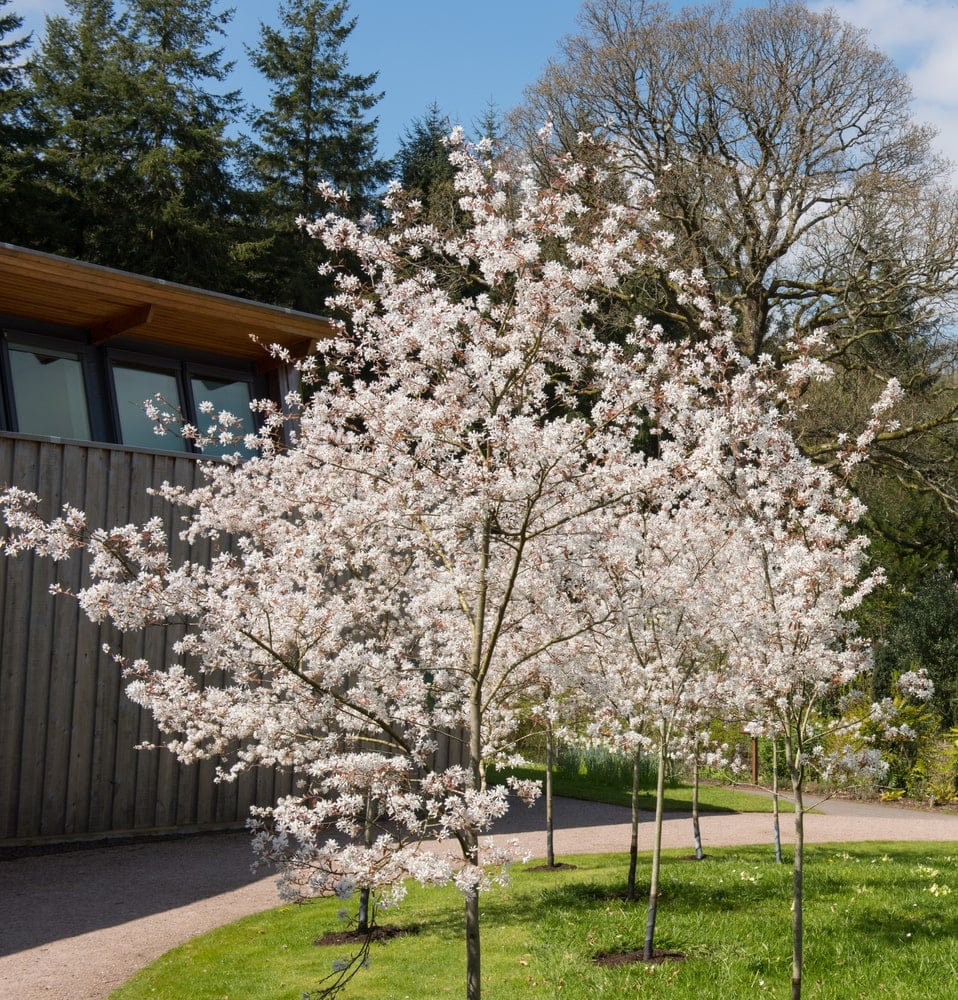 Serviceberry trees have very shallow root systems because they will only grow in areas that are very moist. These shallow roots make for very easy transplanting and are a large part of why they are such popular ornamental trees.

The dimensions of the serviceberry tree vary greatly based on their growing conditions and how they are pruned. They can be anywhere from 0.2 meters to 20 meters tall. Some are small trees, some are multistemmed shrub, some are low shrub patches, and some are clump-forming shrubs.

The bark of a young tree is either gray or brown and is very smooth in texture. A mature tree will have similarly colored bark, only slightly darker, and they will have developed shallow fissures.

The leaves of a serviceberry tree are simple and alternately arranged on the twig. They are either lanceolate in shape or elliptic orbiculate. They appear in the late spring after flowers are in full bloom.

A serviceberry leaf will emerge downy and light green and eventually grow into a deep green color that has a matte surface. The surface is glabrous, and the underside of the leaf will be covered in downy hairs in their youth.

How do Serviceberry Trees Reproduce? 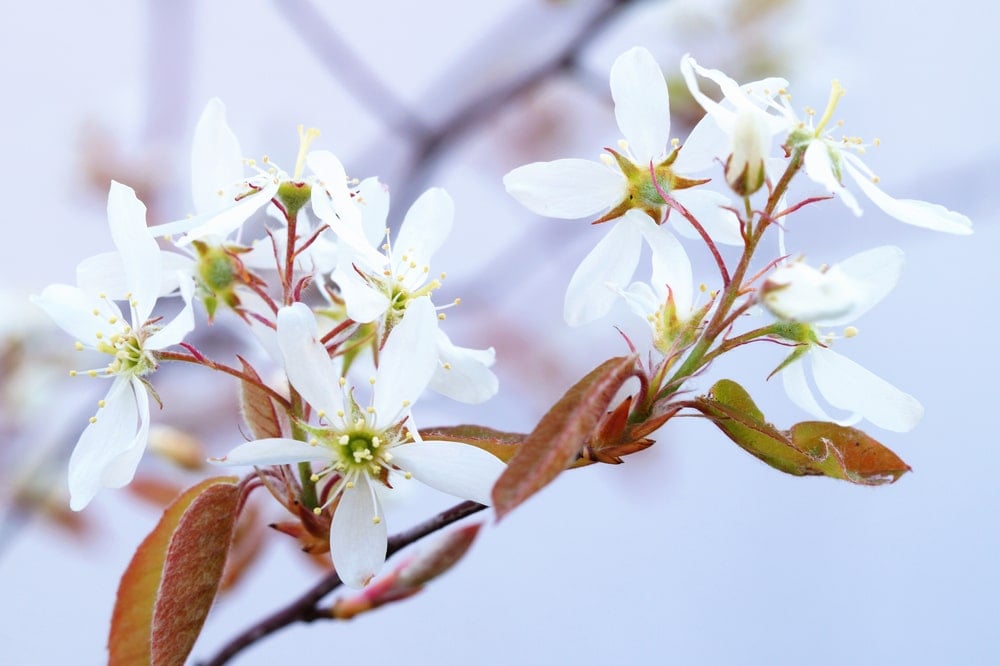 Somewhat unique to this tree, a serviceberry flower will bloom before the spring foliage does, in early spring. Serviceberry trees are dioecious, meaning that male flowers and female flowers occur on different trees. They need to be pollinated by bees or other insects.

Serviceberry flowers are very aromatic to help entice pollinators. The tree will grow showy white flowers with 5 petals, though they can sometimes be light yellow or pink, or with red streaks. They are produced in loose racemes at the ends of branches in groups of 4-10. 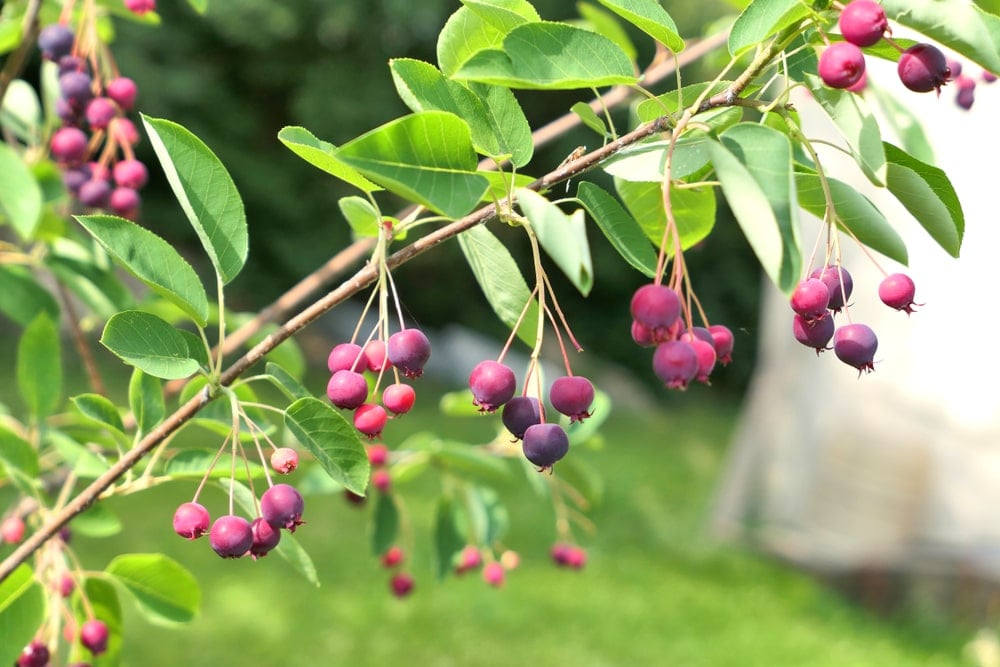 Once a serviceberry tree is successfully pollinated, it will produce fruit in the form of a berry. This serviceberry fruit is like a pome, is wonderfully sweet (and edible both to animals and humans), and is either deep red, purple, or black.

The fruit matures in the summer, and they are similar in size and flavor to a blueberry, though the flesh is far meatier and filled with seeds.

Where do Serviceberry Trees Grow?

They are usually found near bodies of water; streams, riverbanks, lakes, swamps, and bogs.

What Are the Growing Conditions of Serviceberry Trees?

This tree can grow in any type of soil as long as it is moist and has good drainage.

The serviceberry is a very shade-tolerant tree, hence its tendency to grow very small. They are an understory plant and can handle partial shade in a forest canopy coverage.

How Are Serviceberry Trees Used? 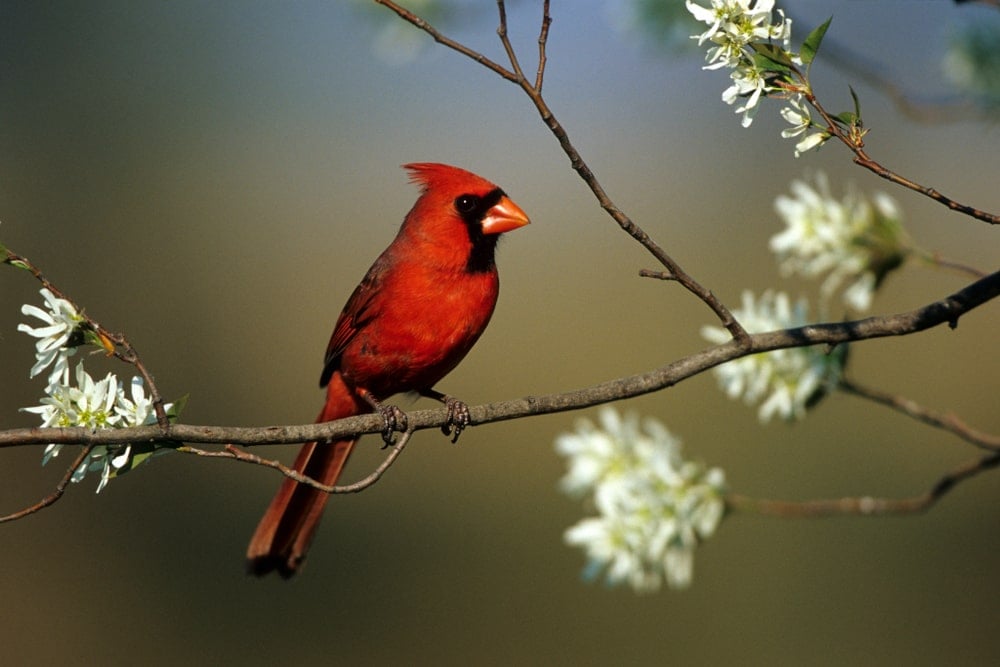 The wood of the serviceberry tree is hard, brown, heavy, and close-grained. The heartwood is a darker red-brown color, with lighter sapwood. Because the trees and shrubs are so small, they are not valuable in the timber industry, though serviceberry wood has been used to manufacture fishing rods and tool handles.

The wood of the tree has been used to not only make arrow shafts, but members of the Pit River Tribe have used serviceberry wood to create body armor in the form of a heavy robe.

There is also a food called pemmican that is minced dried meat that is flavored with the fruit of the serviceberry tree.

The serviceberry tree berry looks somewhat like a blueberry, though as a thicker skin and a meatier texture to the meat of the fruit. They are filled with seeds and have very deep purple skin.

The fruit tastes excellent raw, or it is a great option for making pies and jams as well. When these berries are harvested commercially they are referred to as Saskatoon berries. 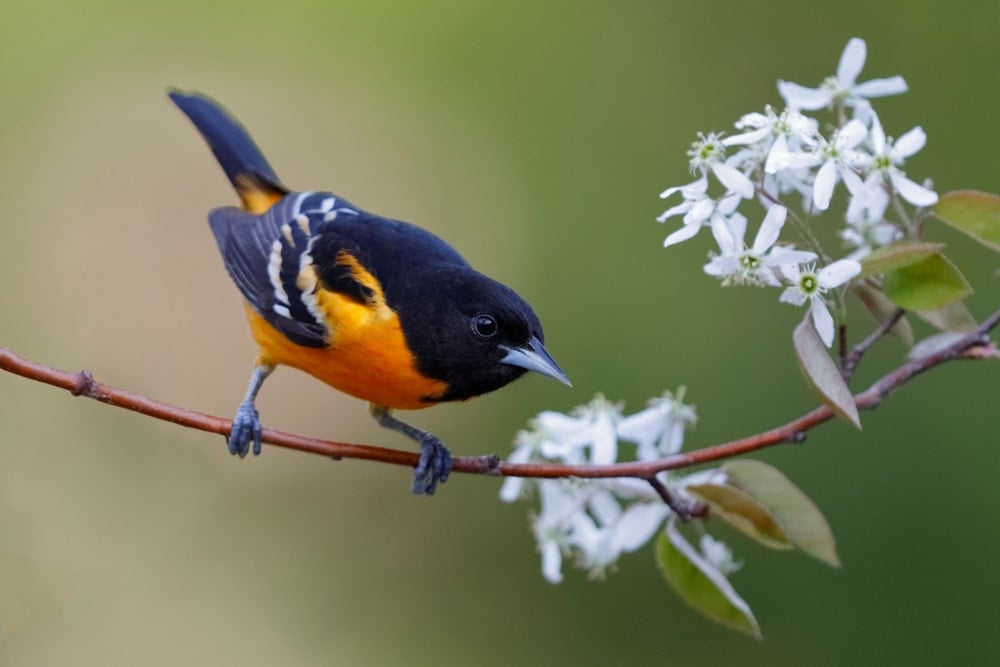 This tree is also heavily eaten by deer, birds, and rabbits, especially twigs that provided a much-needed meal in the harsh winter months. Leaves are eaten by herbivorous insects.

Is serviceberry a messy tree?

Because the serviceberry is a deciduous tree, some might label it as being a messy landscape tree. It will not only lose its leaves in the fall, but its spring flowers will also fall, as well as their fruit in the late summer.

However, all of this debris will likely be eaten by one species or another, and provides valuable shelter for insects and small mammals in the wintertime!

Why is it called serviceberry?

There are 2 different stories as to how the tree got this name. The first comes from lore taken from circuit-riding preachers in colonial times. When a serviceberry tree would bloom in the spring, that would indicate that the Appalachian mountains were safe enough to start traveling through to resume service.

Another tale is that once the tree would bloom in spring, that would indicate that the ground was thawed enough so that graves could be dug for those who passed away in the winter months, and burial services scheduled.

The berries and twigs of the serviceberry tree are very nutritious and delicious to many deer, and for this reason, it is not deer resistant.

Is serviceberry the same as juneberry?

Juneberry is another term for serviceberry, as the small berries that grow on this tree usually emerge in the month of June.

What is a shad tree?

A shad tree is another name for a serviceberry tree. It got the nickname “shad tree” from a method of tracking seasons. A way of tracking the seasons used to come from observing nature’s signs. Shad is a type of herring, and when the serviceberry would bloom, it would indicate “when the shad run” and it was time to harvest fish.

What is the smallest Amelanchier?

Amelanchier alnifolia “obelisk” is a hybrid serviceberry species that have been bred to be very tiny, and it rarely ever exceeds heights of 4 meters.

Is serviceberry a tree or shrub?

The serviceberry can be either a tree or a shrub. It will obtain different sizes based on the growing conditions and location. It can grow to be 30 meters tall, or as a ground cover type large shrub.

Serviceberry trees are dioecious, meaning that male flowers and female flowers occur on different trees. This means that they are not able to self-pollinate, and need to be pollinated by insects.

Yes! Not is the fruit from a serviceberry edible berries, they are sweet and delicious. They are harvested commercially and are labeled as “Saskatoon berries”.

How should you prune a serviceberry tree?

Pruning a tree is mainly to the preference of the landowner. A tree does not need the help of a human to grow properly. If one were to prune a serviceberry tree, it would be important to avoid doing so in the winter months, as the cut would continuously ooze sap and create a large mess.

Additionally, it is best to reserve pruning for branches that appear as being sickly or infected, or if it is growing in an awkward direction and interfering with other branches.

How do you identify a serviceberry tree?

The easiest way to identify a serviceberry tree is by either its white showy flowers with 5 petals or by their small, deep purple berries that emerge in the summer.

How long do serviceberry trees live?

Serviceberry trees are relatively short-lived and have a life expectancy of 40-150 years depending on their growing location.

How quickly do serviceberry trees grow?

Serviceberry trees are medium-fast growing, averaging about 12 inches of growth annually until they are fully grown.

Where is the apple serviceberry a native tree?

The apple serviceberry tree or the Pacific serviceberry is native to the western side of North America. They grow naturally from Alaska, throughout British Columbia, and all along the west coast of America.

How deep do roots go on a serviceberry tree?

What diseases affect the serviceberry tree?