Learn more about the beautiful red pine trees, what they look like, where they usually grow, the conditions needed so they can thrive and a few FAQs answered. 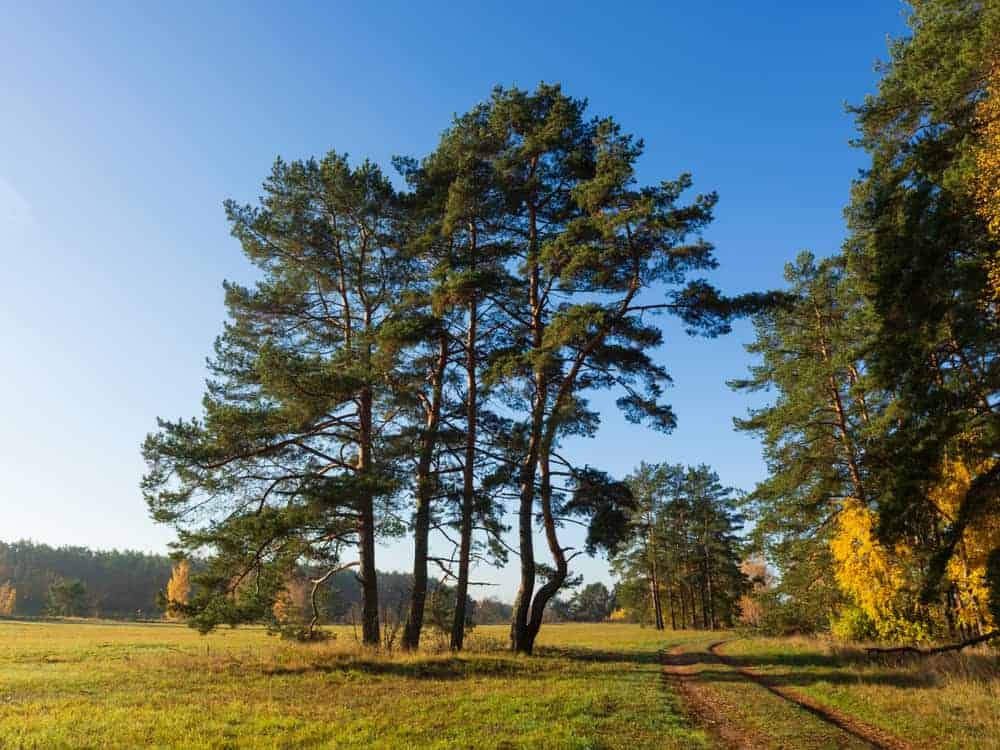 The red pine is an evergreen conifer tree that is native to northeastern North America. They are usually a dominant overstory species, though they sometimes occur as an understory species when they grow in congruence with the white pine (pinus strobus) and jack pine (pinus banksiana).

Sometimes referred to as the northern pine or the Norway pine. They received the nickname “Norway pine” from early Scandinavian immigrants who found the red pine stand similar to the close relation European red pine stand.

They are a long-lived tree, and can sometimes exceed a life expectancy of 500 years! This makes them proud members of the old-growth forest. They are the state tree of Minnesota, and though they aren’t super valuable in the lumber industry, they are an important tree species to many birds, insects, and animal species.

Curious about other types of trees? After you’re finished reading about pinus resinosa, head on over to 101 Types of Trees to see what other woody plant friends are out there!

The red pine tree commonly grows in areas that experience very strong winds, and so they develop root systems that accommodate those harsh conditions. They will develop roots that grow widespread and laterally that radiate like spokes on a wheel, and they remain in the topsoil.

See also  What is a Bat Fig Tree? Get the Facts

They will also develop taproots and vertical sinkers. These types of roots not only help the tree access moisture reserves deep in the earth but also ensure that the tree will not easily rip out from the earth during severe storms.

Red pine trees are a very tall pine species and will reach heights between 20 and 35 meters, though there are some exceptional trees that have reached 43 meters. The trunk diameter of the tree is relatively thin compared to their height and branch pattern and is only about 1 meter in diameter. Luckily, they have deep roots to keep the tree upright. 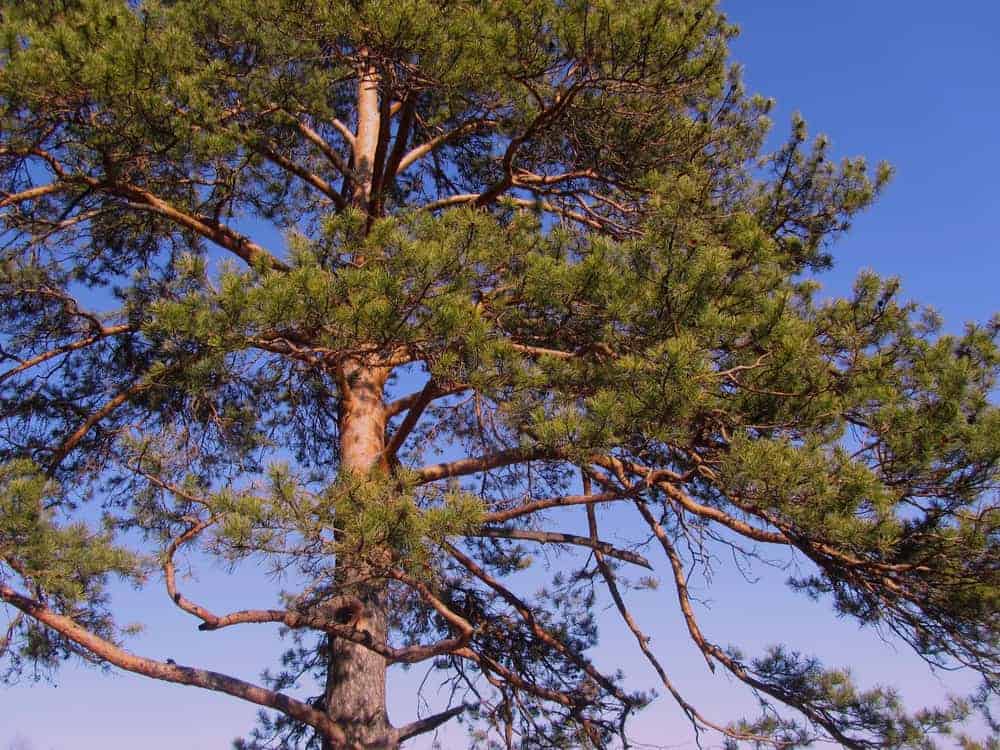 Red pine trees have conical crowns comprised of curved branches that become rounded domes with age. This is because the tree is impeccably good at self-pruning, and older trees will often have long lengths of branchless trunks before the canopy. 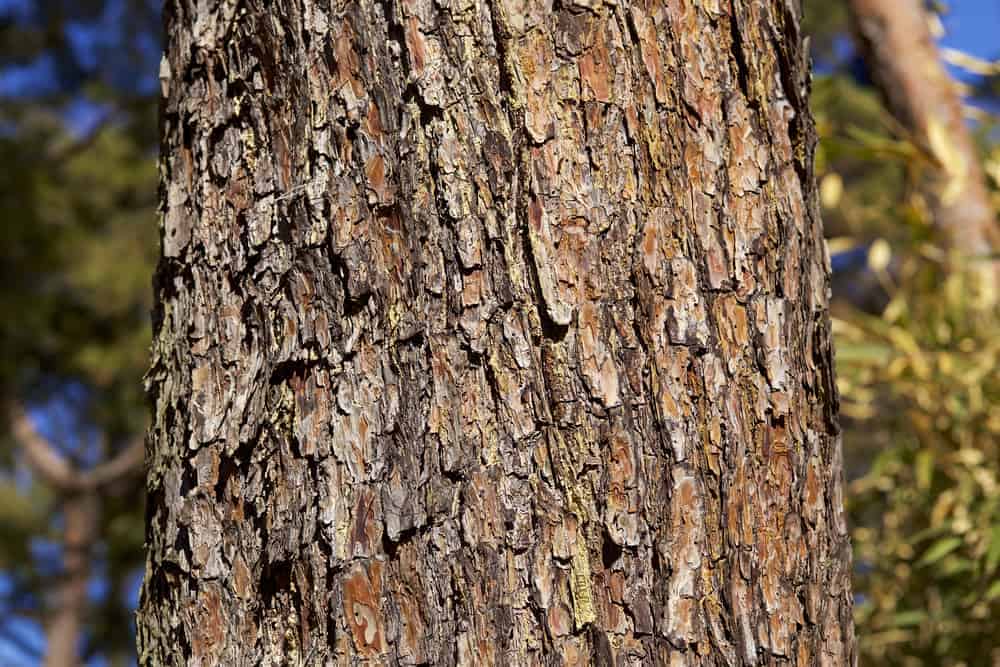 The bark of a young tree is light gray-brown and lightly textured. Mature trees have very thick scaly bark, that flakes off in thin scales. The inner bark is very bright orange/red in the upper crown of the tree. The name of the tree comes from this distinctive characteristic. Lower down on the trunk, it is possible to see the bright red inner bark through the fissures of the bark. 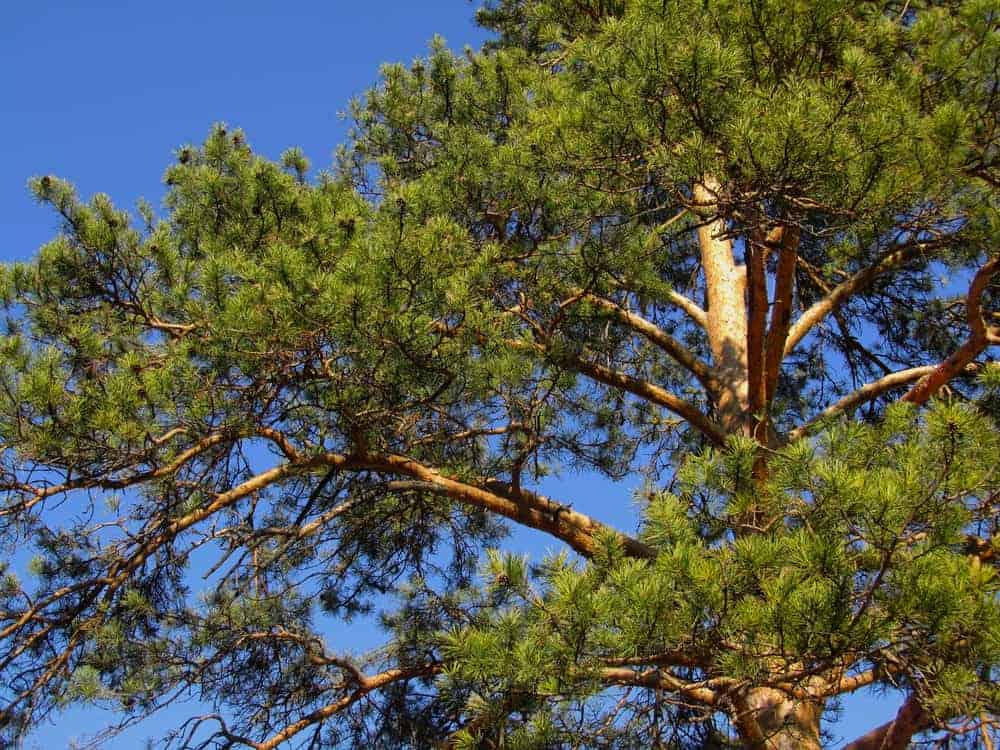 The red pine leaf is needle-like. They grow in fascicles of 2 (which is the easiest way to identify different pine species) and are 4-7 inches long. They are a dark yellow/green color, are slightly twisted, and are highly brittle. They will likely snap in 2 if they are bent.

See also  How to Care for a Valerian Plant!

How do Red Pine Trees Reproduce?

Red pine trees are monoecious, meaning that both seed cones (female cones) and pollen cones (male cones) occur on the same tree, but on different branches. Male cones develop first at the base of the current year’s growth on the lower half of the tree. They are small and short-lived.

Female cones develop later in the season (to help prevent self-pollination) and grow in the upper half of the tree, to further the prevention of self-pollination. This makes it so that the pollen that is carried through the wind will be unlikely to blow from the bottom of a tree to the top of a tree.

The pollen will remain inside the seed cone as it matures, and will not open until a fire has created mineral ash soil which will allow the seedlings to germinate. Then the scales of the cone will open and disperse red pine seeds. 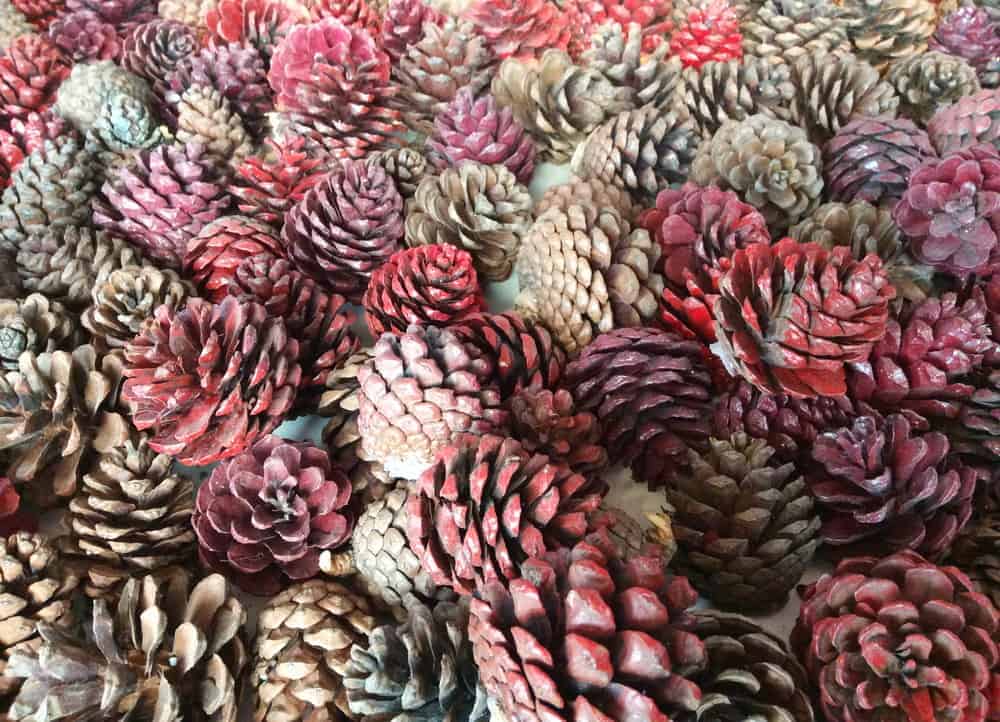 Cones are symmetrical and ovoid-shaped. They are broad and dark purple before they reach maturity. They will develop into a cone with broad scales without prickles.

In order to germinate, the red pine seedlings have to be exposed to mineral soil that is prepared by fire damage. They do not have any dormancy requirements, though the shade is beneficial.

Red pine trees will start producing female cones around the age of 5, and they will start producing male cones around the age of 9. They will produce good crops every 3-7 years, with unproductive crops the years in between. They will produce bumper crops every 10-12 years. Luckily, the tree is very long-lived, which makes up for their erratic seed production.

See also  What is Compost Used For?

Where do Red Pine Trees Grow? 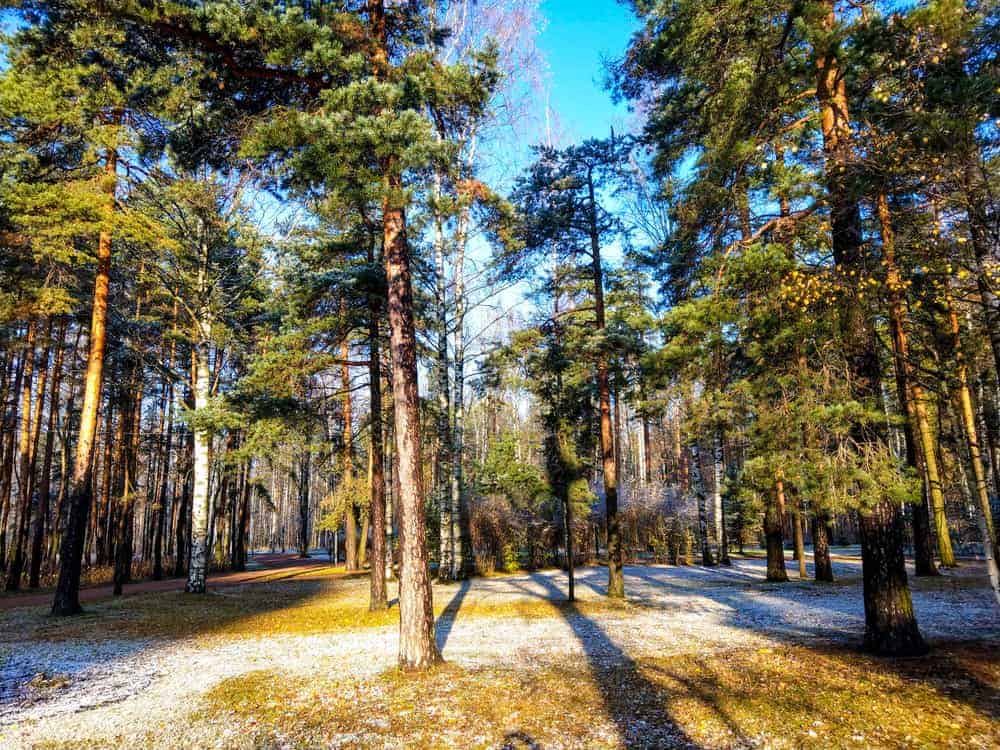 Red pine stands are native to eastern North America. They grow in Canada from Newfoundland, Nova Scotia, Prince Edward Island, New Brunswick, and westward to Manitoba. They grow in the United States in Pennsylvania towards the Appalachian Mountains, to Virginia, New Jersey, Illinois, Cape Breton Island, Maine, northern Minnesota, Michigan, Connecticut, Massachusetts, and towards the Great Lakes Regions and the St. Lawrence river.

A red pine plantation will do well in very sunny areas with almost any kind of soil. These trees need plenty of space to grow, and they perform much better in the countrysides than in cities. They will commonly grow in sandy plains, rocky outcrops, and anywhere where soil fertility is low.

What are the Growing Conditions of Red Pine Trees? 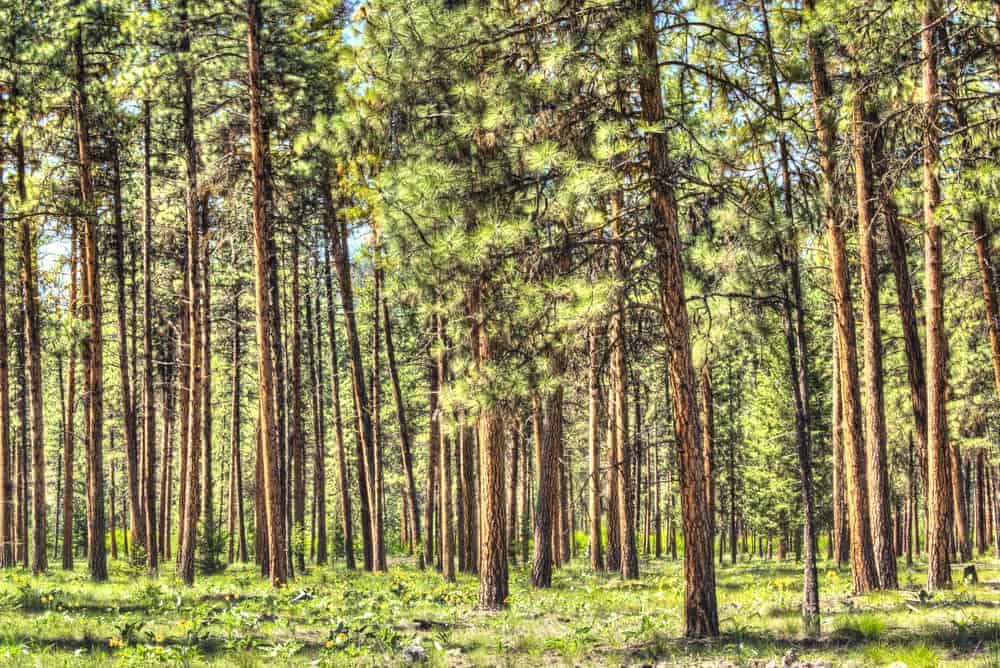 Red pines grow best in well-drained soil, though they are tolerant of poor, rocky, or sandy soil as well. They prefer nutrient low soil, which is quite common for pine species.

Red pine trees are completely intolerant of shade, but this is quite normal for evergreen trees. They prefer complete all-day sun. They tolerate any level of moisture because of their root system type.

How is Red Pine Trees Used?

Red pine wood is light, weak, and isn’t particularly valuable in the lumber industry. The wood is very weak and is very susceptible to warping. However, red pine wood is used for timber, paper pulp, poles, and pilings.

See also  What is a Monkey Puzzle Tree?

Red pines are used as landscaping trees as a windbreaker for more delicate plants. Their dense canopy and sturdy trunk and branches help create a valuable wind barrier. 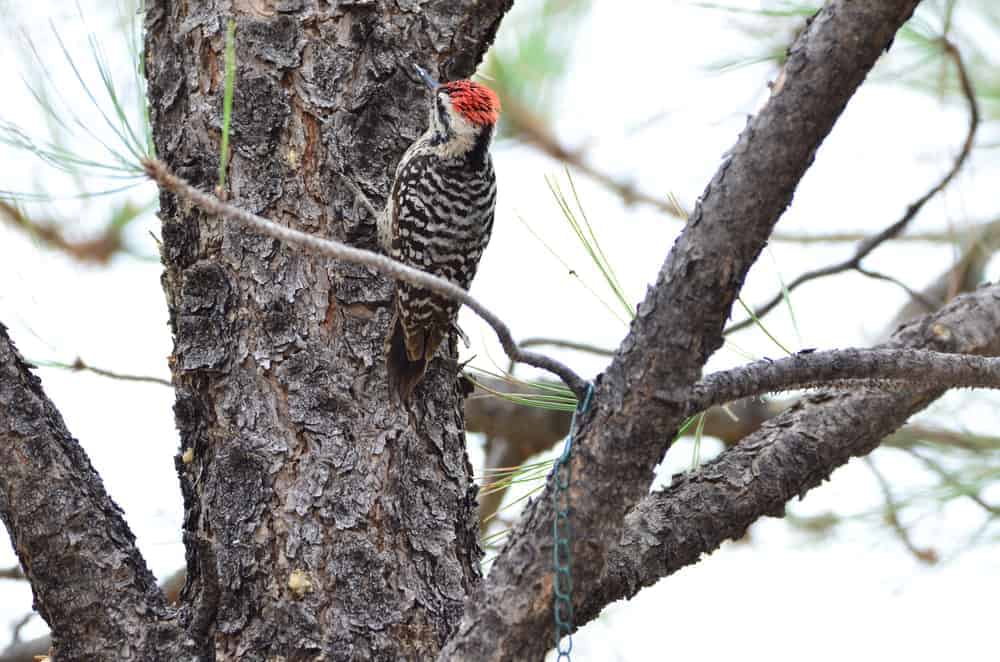 The red pine tree seed is eaten by squirrels, mice, chipmunks, and many other small mammals. Their leaves are browsed upon by the bark beetle.

There are many species of birds that feed on and live in pine trees. They feed on the seed-filled cones of firs and spruces as well. Some of the bird species include; bluebirds, chickadees, grosbeaks, finches, robins, and sparrows.

Redwood trees are not pine trees, though they are similar because they are both conifers (cone-bearing) and they have gymnosperms (naked seeds).

Red pine trees are medium to fast-growing and can grow between 12 and 24 inches in a year.

Red pine trees are very long-living trees, and they have a life expectancy of over 500 years! Though it is more common for them to be between 200 and 300. Either way, they are a proud member of the old-growth community because they live to be over 120 years old.

Red pine trees are medium to large trees, and they will grow to be between 20 and 35 meters tall, though there are some exceptional trees that have gotten to be over 43 meters tall.

How do you identify a red pine tree?

The easiest way to identify pine trees from one another is by the number of needles that grow in a cluster. The red pine tree only has a cluster containing 2 needles.

See also  What is an Eastern Cottonwood Tree?

When should you prune a red pine tree?

Red pine trees are very efficient at self-pruning. This means that they will shed any branches or foliage that requires too much energy to grow. Old trees will actually have long lengths of bare trunks where they have shed their branches before the canopy resumes.

Deer don’t particularly like pine needles, though in the wintertime they will graze upon almost anything. This is obviously because there are almost no other sources of food for animals in the harsh winter months.

Which pine trees have red bark?

When do red pine trees replace their needles?

Red pine tree needles will usually stay living on the tree for around 3 years, though there are some exceptions will they will stay in the tree for over 6 years.

There are many species of birds that feed on and live in pine trees. They feed on the seed-filled cones of firs and spruces as well. Some of the bird species include; bluebirds, chickadees, grosbeaks, finches, robins, and sparrows.

How close can red pine trees be planted together?

Red pine trees should be planted quite far apart. This is because their root system is very expensive. They have both taproots, sinker roots, and wide-spreading lateral roots. This is so that the tree can not only stay firmly in the earth in the midst of harsh winds but so that the tree can access moisture reserves deep in the soil.

See also  What is a White Spruce Tree?

How do you tell red pine, white pine, and pitch pine apart?

What is a Japanese red pine?

The Japanese red pine (pinus densiflora) is a species of pine that is native to certain parts of Asia. It is a large conifer that is mostly planted as an ornamental tree.

What is an Austrian pine?

The Austrian pine or the black pine (pinus nigra) is a pine native to southern Mediterranean Europe. They grow at high elevations and are a large species of pine.

What is a scotch pine?

The scotch pine (pinus sylvestris) is a species of pine tree native to Eurasia. They are a large conifer that grows at very high altitudes and are considered mountain trees.

What an eastern white pine?

The eastern white pine (pinus strobus) is a species of pine that is native to North America. It is a large conifer that grows in many different soil types.