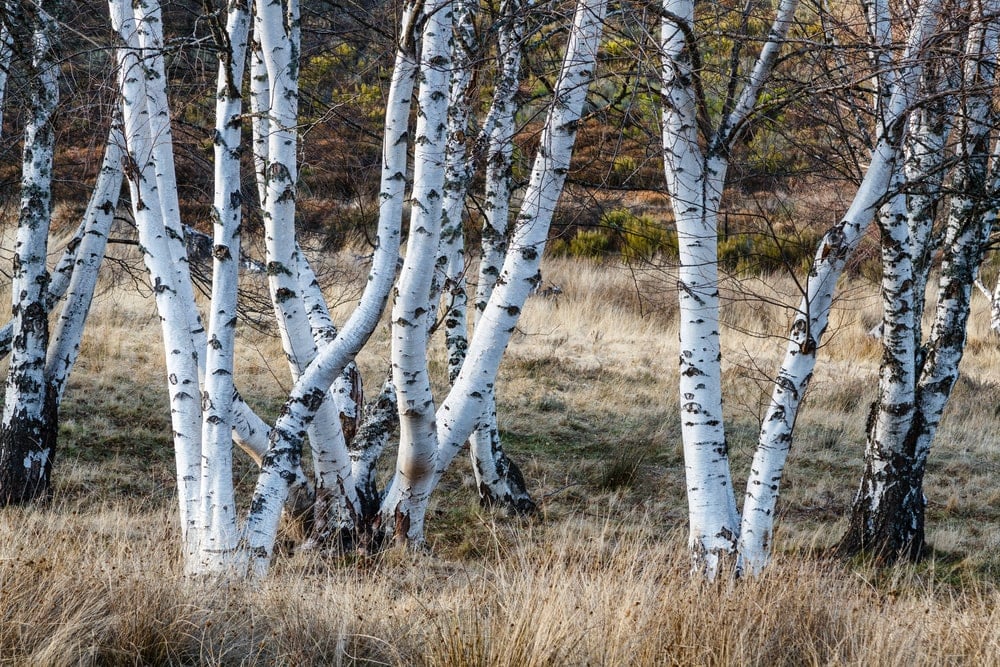 The more I learn about the wonder of birch trees, the more I want to share the information that I’ve found! These thin white trees may not look like something impressive, but underneath those thin sheets of pale bark lies a very resilient tree.

Birch trees produce sap that can make syrup, have been used as writing material, feed a rare type of moth, and are the very first tree to populate an area that has been devastated by a forest fire. Go here to explore 101 Types of Trees from around the world, but stick around if you want to learn more about the gray birch (betula populifolia).

Birch trees all look very similar to one another, but there are vast differences among them. Compared to the sweet birch tree that can live to be 350 years old, the gray birch lives only about 30 years!

The gray birch will grow to be much shorter than its siblings, a mere 9 meters as opposed to the 30 meters that a yellow birch can grow to be. That’s quite a small tree!

Of all the varying growing conditions and life expectancies and growth rates, there is something that all birches do have in common. They are all pioneer species. This means that after a natural disastrous occurrence has happened in a forest, birch trees are the very first to repopulate the area.

The birch tree is a fast-growing deciduous tree, they usually live short lives, and they provide for their ecosystems. They are survivors and thrivers! 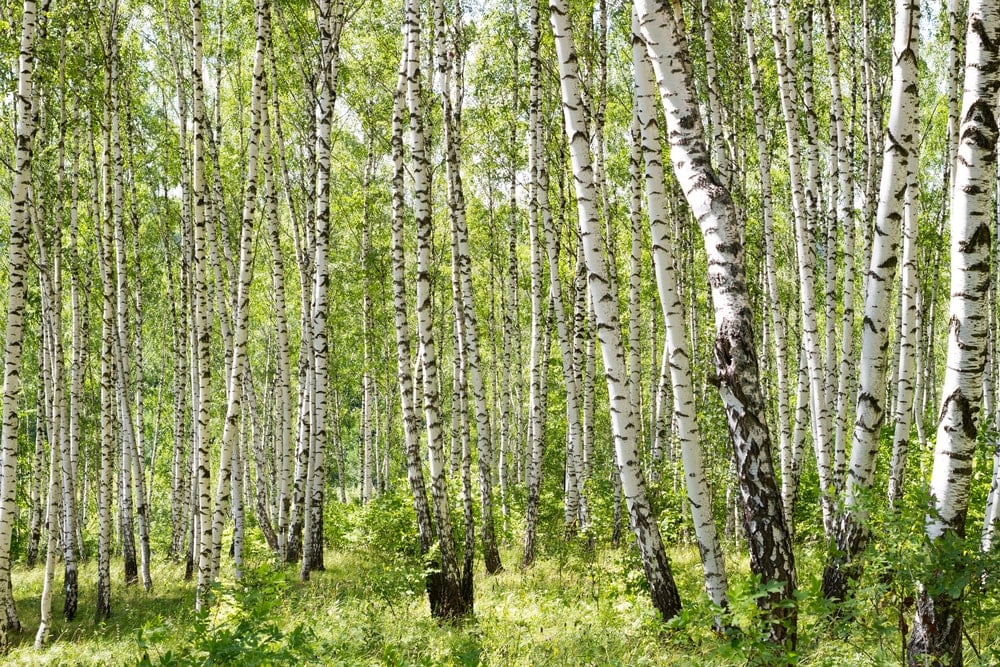 Where do Gray Birch Trees Grow?

The gray birch is a tree native to North America. It grows in very specific regions with the required conditions to thrive. In Canada, the gray birch grows in south eastern Ontario and eastern Nova Scotia.

Oddly enough, gray birch trees prefer to grow in soils that are very low in nutrients with a low pH level as well. They live in regions that have dry soils (usually in barren plains) but can also be found in a variety of mixed woodlands.

As mentioned before, regarding birch trees as being pioneer species, gray birches can also be found in abandoned fields where a devastating forest fire has just ripped through. It’s not only the recent burn environment that enables swift growth but the fact that the gray birch has no competition.

We’ll go into deeper detail in the reproduction section, but the seeds of gray birch trees are so light that they can travel very far on a gentle breeze, and so they’re often the first seeds to germinate after a forest fire. 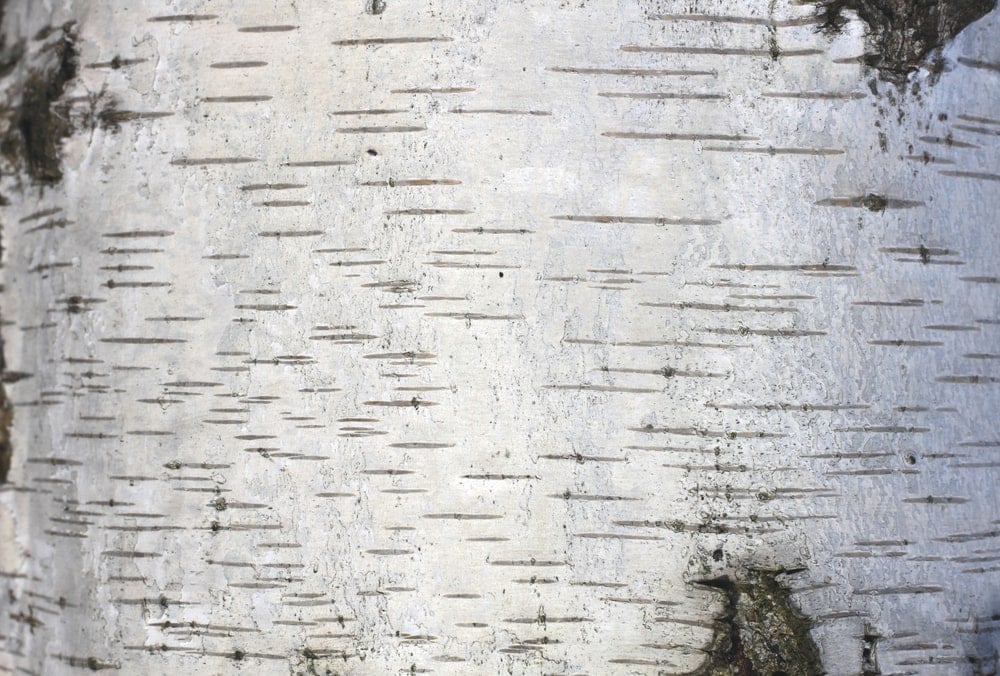 Gray birch trees look much like the rest of their birch siblings — most specifically the paper birch (Betula papyrifera) or white birch. Their bark is the same white bark with a paper-like texture. It grows in horizontal lenticels and peels back like thin sheets from a notebook to reveal the inner bark below. The main difference between them is that the gray birch doesn’t exfoliate as much as the paper birch does.

As the birch bark peels away, it reveals darker colored layers of bark underneath. Young trees are pristinely smooth, whereas an older tree will have vertical slits of dark and rough bark that is revealed.

The crown is made up of a collection of irregular and slender branches that only grow at the very top of the trunk. At the end of the birch twig, you’ll find triangular leaves that are darker green on the top and lighter green on the bottom. They have ovately shaped that taper off to a pointed tip. The edges of a birch leaf are coarsely serrated, and the sprout backs up in early spring after their yellow leaves are lost in the fall.

The roots of a gray birch tree grow rather shallow in the soil, and laterally rather than deep into the earth. The reason for this is that gray birches don’t require a huge amount of water, and so they needn’t access all of the stocked moisture deep in the soil. 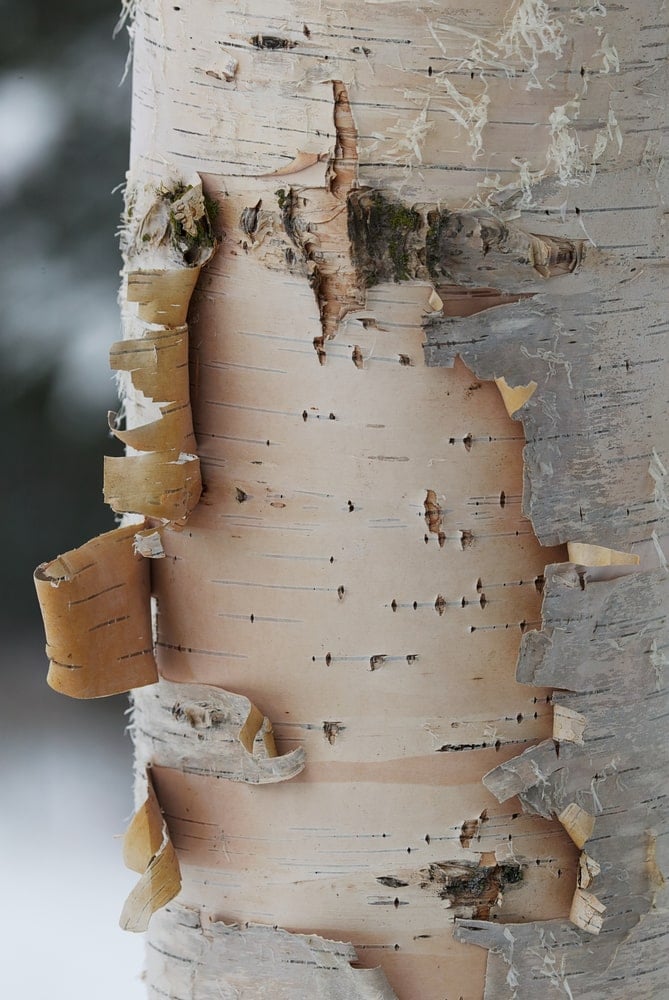 How do Gray Birch Trees Reproduce?

All birch trees reproduce in the same way, through wind pollination. The gray birch is a monoecious tree, meaning that it possesses both male flowers and female flowers. However, they may not look like flowers to the untrained eye.

These types of flowers are actually called catkins, and they’re a tiny cluster of flowers on the end of very thin stems. They have either indistinct or no petals at all. At the base of this catkin, the cluster is where the seeds are found.

They usually mature in late autumn. The male catkin is pendulous (drooping) so as to release pollen, and the female catkin stands erect, in order to catch the pollen and become pollinated.

The seeds of a gray birch tree are extremely small and lightweight and they don’t have a hard casing. They are miniature samaras (winged pods) that enable them to be blown very far from the mother tree.

This is where the pioneer species is discovered. Due to the fact that these small seeds can travel so far, means that birch trees can easily populate many areas. They produce so many seeds that the likelihood that many of them will have successful germination, is rather high.

Since the seeds don’t have a hard casing, they will germinate quickly, and be the first to sprout into a seedling, then a sapling.

How is Gray Birch Wood Used?

Because gray birch trees are more tolerant to heat and moisture than say, the sweet birch or silver birch tree, they are a popular cultivar choice as landscaping trees in Pennsylvania and New Jersey. Another reason is that they’re fast-growing, easy to care for, and are quite resistant to the bronze birch borer (agrilus anxius).

Gray birch is medium hard and easily workable. It’s not the most attractive type of wood, but it is close-grained. This makes it a common choice for high-grade plywood, drum shells, spools, and furniture manufacturing.

Additionally, because birch trees have such high oil content, they make excellent firewood, even if the wood is wet!

What is the Ecology of a Gray Birch Tree?

Out of all of the birch species, the gray birch has some of the least nutrient-rich foliage and twigs. This is because they grow in poor soil, and so there are no nutrients to be transferred into the tree itself.

However, many lepidopteran (moths and butterflies) species feed off of gray birch foliage, most specifically being the leaf miner moth.

What is the scientific name for gray birch?

The scientific term for the gray birch tree is Betula Populifolia.

What is birch tree good for?

Birch trees are super fast-growing and resistant to pests that other birch trees can’t tolerate, making them a great choice as a landscaping tree.

Birch tree wood is medium hard and fine-grained, and so it’s a good choice for plywood, furniture making, and cabinetry.

What does the birch tree symbolize?

Like many aspects of nature, the birch tree (because it’s so prosperous and fast-growing) commonly symbolizes themes like growth, stability, adaptability, regeneration, and hope.

Can you prune birch trees?

There really wouldn’t be a need to prune a birch tree unless it had a branch that seemed like it was wounded or sick. Since they’re so short-lived, they will really kind of grow as they please.

Additionally, if you prune a birch tree at the wrong time of year, it will be consistently bleed birch sap and create a big mess.

Are there dwarf birch trees?

From the betula pendula variety, there is a dwarf variety known as betula Magical Globe or the Magical Globe Birch. This dwarf tree has silver bark and a pristinely ball-shaped crown.

How do you tell a birch tree from a poplar tree?

Poplar leaves are more rounded in shape, and the bark of poplar trees doesn’t peel off in the same way the birch tree bark does. Birch trees also have ovate shaped leaves that end in a point.

All aspects of the gray birch tree are edible. When leaves are young they can be blanched and used as greens. The twigs and leaves of birch trees are also often used to make birch tea. All of these parts of a birch tree have a wintergreen flavor.

Gray birch trees grow most successfully in poor soils that are low in pH level and nutrients. They don’t like full sun and prefer that their growing environment is dry.

Because gray birch trees don’t require ample amounts of water, their roots tend to grow shallow in soil and more laterally than compact. Because their trunks are so thin, the trunk is more likely to snap than the roots be pulled out.

They are considered to be fast-growing trees. Depending on the species of the birch tree, they grow anywhere between 0.5 meters to a full meter each year, reaching their full height around the age of twenty.

The river birch variety is the fastest-growing of the birch trees at 1 meter per year.