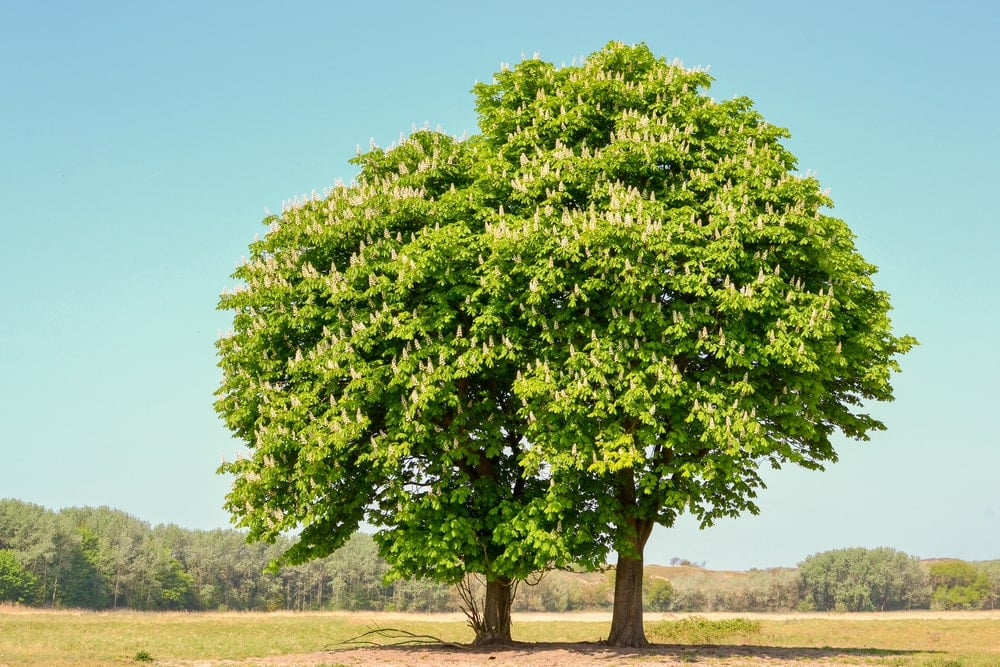 Not a particularly large tree, the chestnut oak is one of the lesser-known varieties within the oak family. They are known for their inner bark that contains ample amounts of tannic acid, their ability to grow stump sprouts, and their likeness to black oak.

A plant that is not commonly found on city streets, it grows most prosperously in the mountains of eastern North America. Chestnut oaks are quite similar to the northern red oak but part of different oak tree groups.

We have articles detailing the red oak, black oak, scarlet oak, and white oak, to learn more about oak trees, or head on over to 101 Types of Trees to learn even more about all kinds of trees!

The chestnut oak is part of a very large family of trees. Part of the Fagaceae botanical family, the beech English family, and one of 500 species of an oak tree, the chestnut oak is a rather well-known type of tree.

Chestnut oaks are part of the white oak group (which we’ll touch on further in the Other Types of Oaks section and are native to the eastern part of the United States. These trees are long-lived deciduous trees and are very important canopy species in the oak-heath forest. 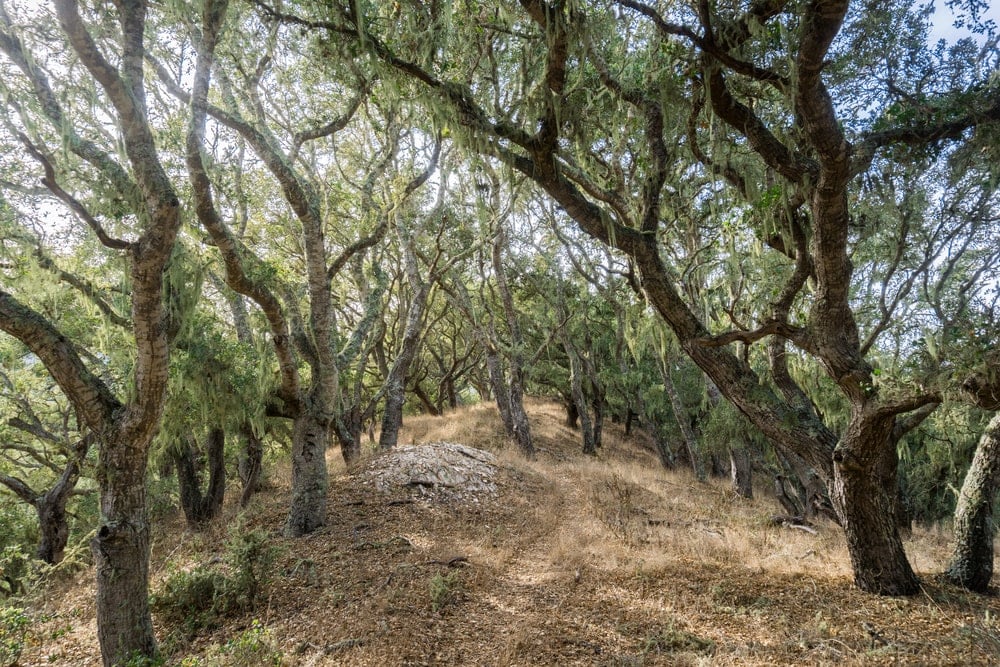 Chestnut oak trees are also referred to as eastern chestnut oak, basket oak, and rock oak — the tree earned this nickname through its preference for growing in mountainous rocky soils, and the swamp chestnut oak earning that nickname from growing mainly near swamps.

Chestnut oaks and swamp chestnut oaks were originally labeled with the scientific name Quercus prinus but were finally given their own distinctions as Quercus montana, and Quercus michauxii.

Oak trees will develop a different type of root system depending on their growing location. The chestnut oak, since it grows more commonly in dry, rocky soils, will develop a woody taproot system.

These taproot systems (something that they have in common with carrots!) grow deep into the earth in order to access moisture. That locked in moisture is then brought up the roots to the surrounding topsoil which is helpful to forest floor plants as well as the tree itself.

Because of the very dry habitat and ridge-top wind exposure, chestnut oak trees don’t grow to be as large as other oak species. In these habitats, the trees will grow to be an average of 18-22 meters tall, with a canopy spread of equal measurement.

If a chestnut tree is growing in more moist areas with less wind exposure, it can grow to be a significant amount taller; sometimes reaching heights between 40 and 43 meters. 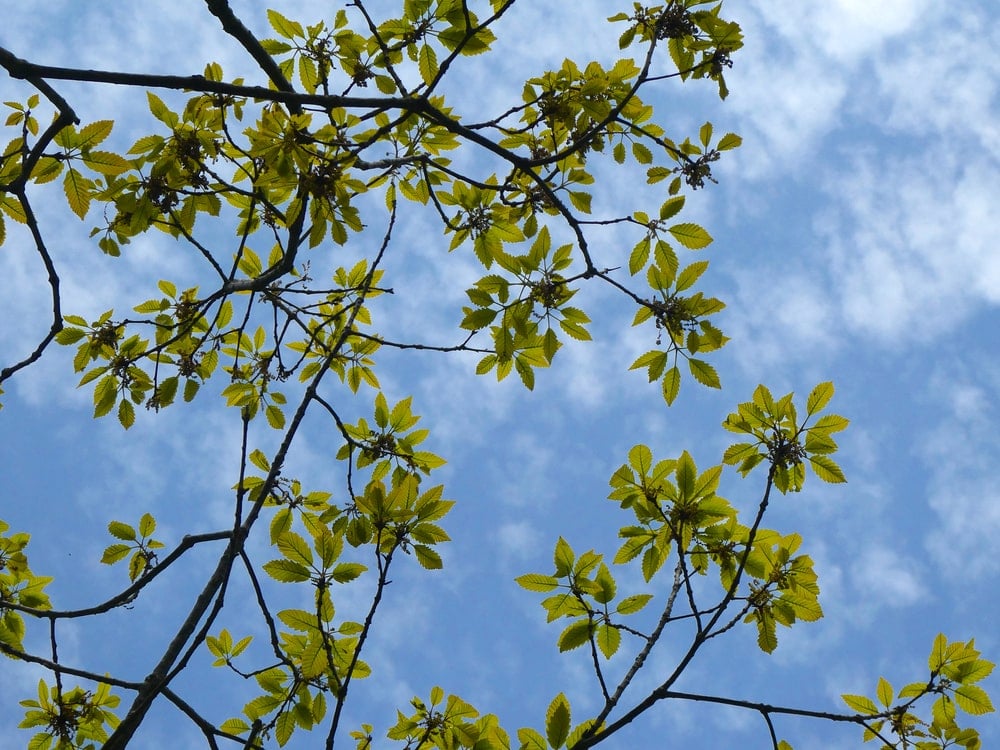 Chestnut oaks are most easily identified by their bark. An old tree will have very dark gray-dark brown bark that has fissured into massive ridges with scales. A young tree will be a lighter gray color with much less texture. The inner bark has very high tannin acid and is dark brown in color. 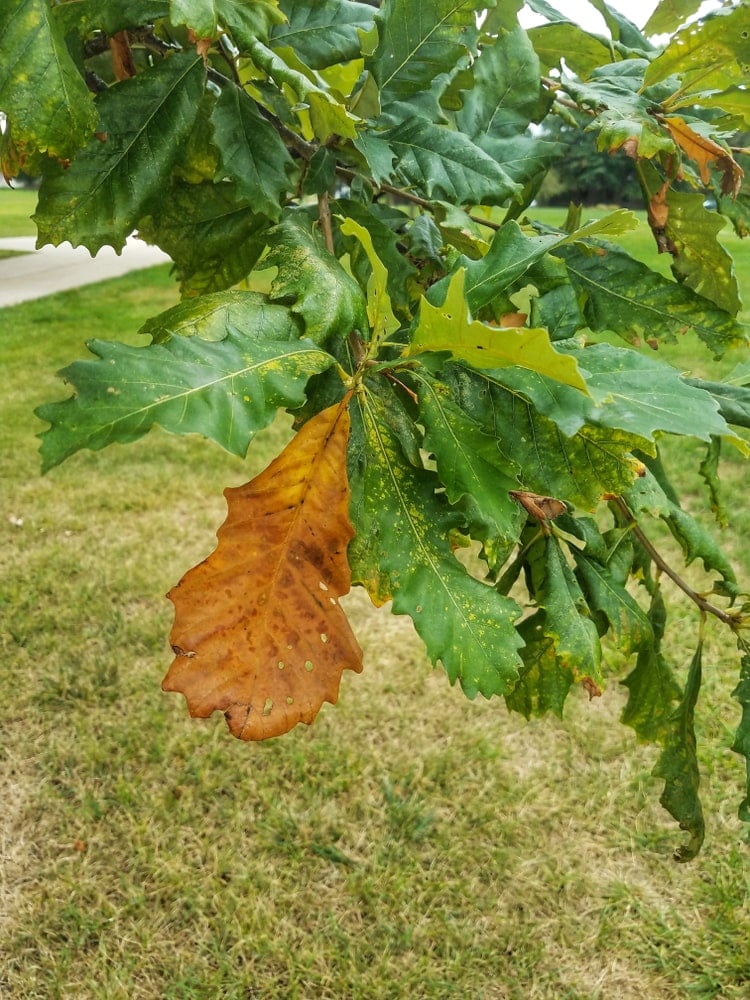 The leaves of a chestnut oak are usually 4-8 inches long and 2-4 inches wide. They have characteristically shallow lobes compared to other oak trees, with 10-15 lobes on each margin of the leaf. Chestnut oak leaves are alternately arranged and are obovate to oblong-lanceolate in shape. The leaf margins are coarsely toothed.

When leaves first emerge from their light brown, downy winter buds, they are a yellow-bronze color. As the leaves grow they become darker green on the topside and pale green on the underside. The underside is also covered in downy hairs. Leaves are decorated with yellow veins. In autumn, leaves turn a dull yellow color before they fall. Leaf petioles are stout, slender, and short.

How do Chestnut Oak Trees Reproduce? 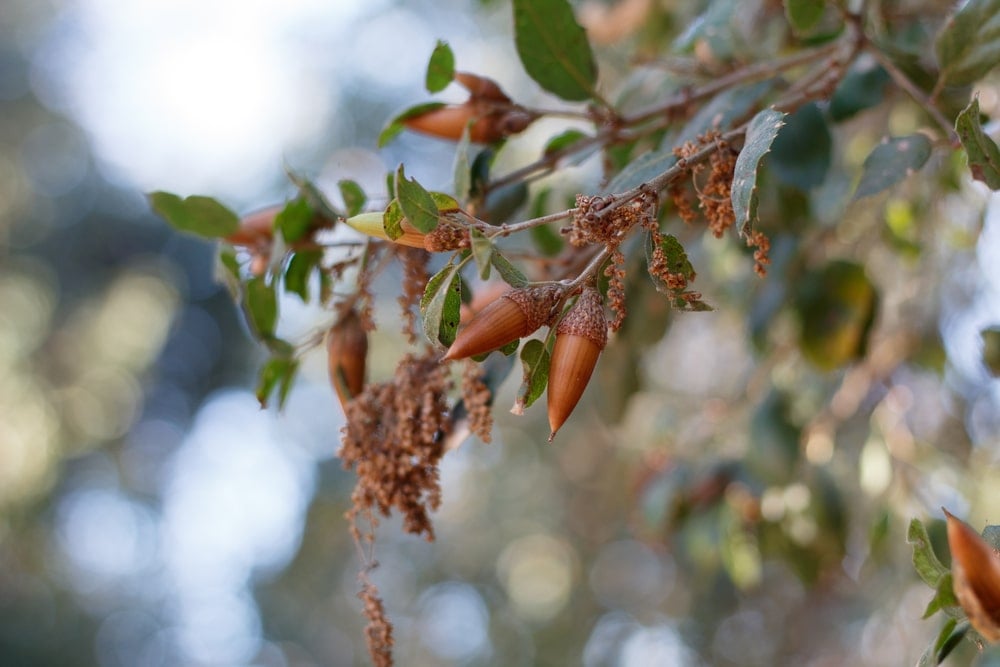 The flowers of a chestnut oak tree will emerge right around the month of May when the spring foliage is grown about a third of the way. Oak trees are monoecious, meaning that they possess both male flowers and female flowers on the same stalk.

Staminate flowers (male sexual characteristics – pollen-producing) are borne as a hairy catkin, which are flower clusters with indistinct or no petals. They are pale yellow in color with 8 stamens.

Once a chestnut oak has been fertilized, either through wind pollination or insect pollination, it will produce fruit in the form of an acorn. Acorns will grow annually in pairs and are a bright chestnut-brown color with a shiny sheen. These acorns or topped with a scaly cap that covers about half of the entire nut. (Chestnut oak acorns are the largest acorns of all oak species).

Chestnut oaks are also capable of sprouting a new seedling from the stump of a cut log. Chestnut oak seedlings have the same genetic material as the stump, and will essentially be clones of the mother tree. Many of the chestnut oaks that sprout in the Appalachian mountains have grown from the stumps, which occurred during heavy logging. 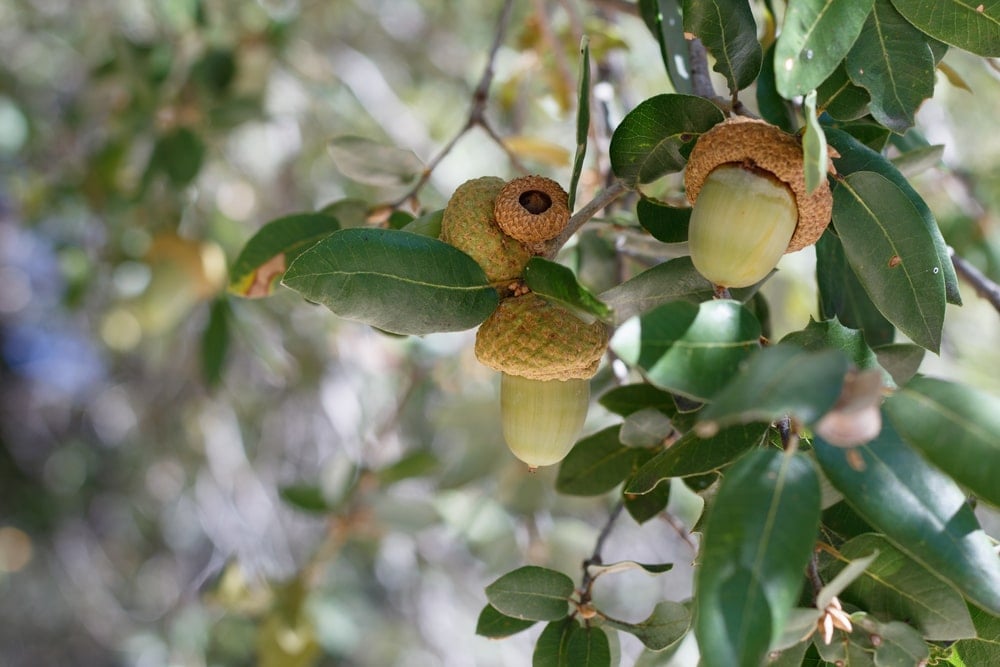 What Are Some Other Types of Oak Tree? 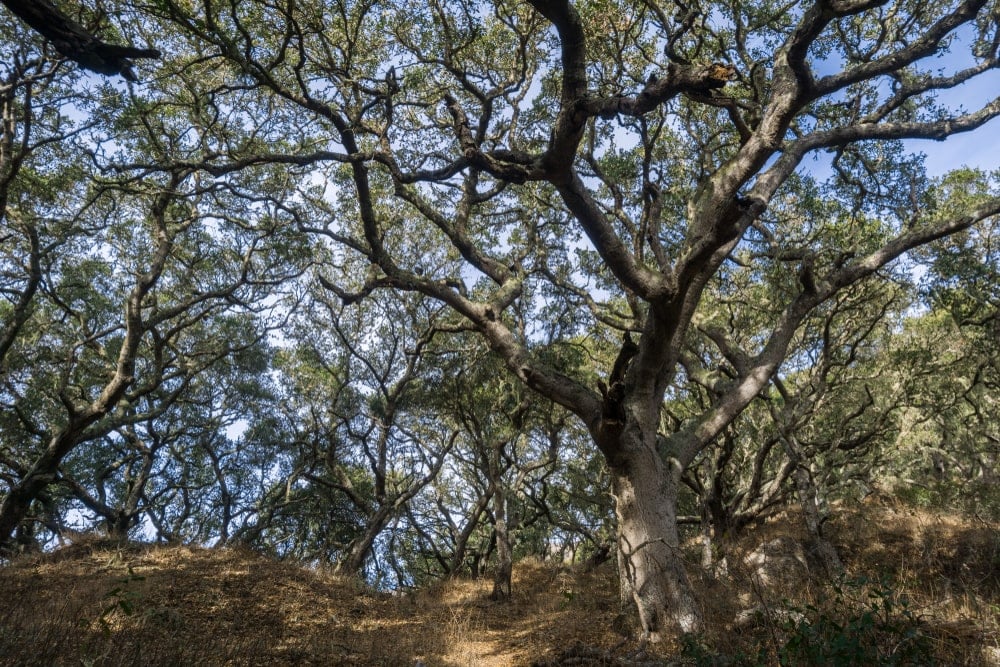 Part of the beech family, fagaceae, the oak is a very large species and contains around 500 different subspecies. The family contains both deciduous and evergreen varieties, and they grow in cool temperatures, tropical temperatures, and everything in between.

The United States contains 90 of the species, Mexico has 160 native oak species, 109 of those which are endemic (only ever have and only ever will grow there) and China has 100 native tree species. 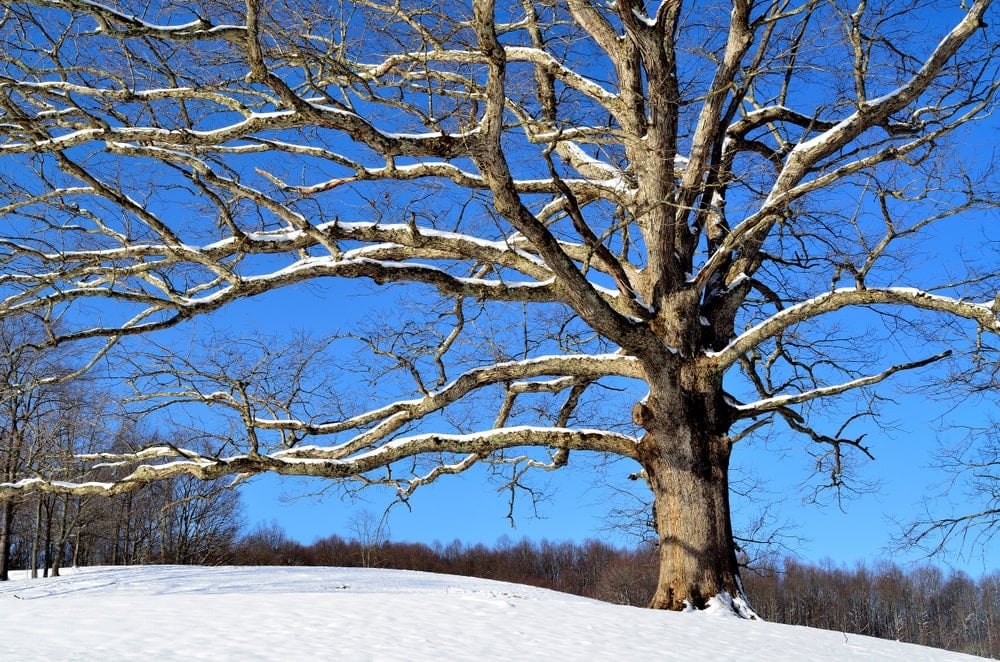 Native to Europe, Asia, and North America, white oaks are a shorter species with sweet acorns and are deciduous. 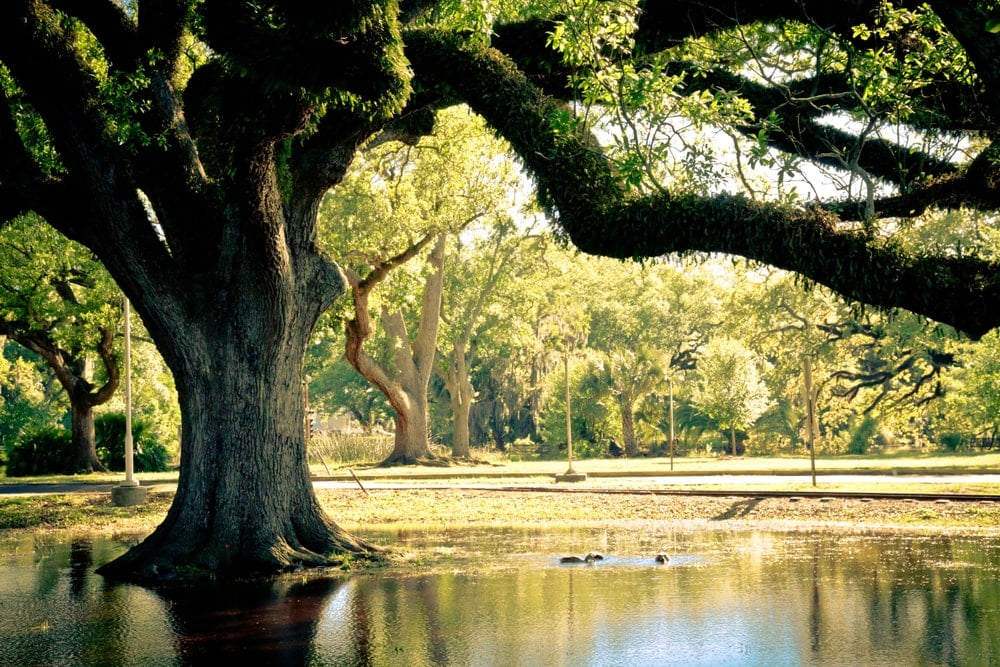 Native to the southwestern United States and northwestern Mexico, live oaks are a shorter species with bitter acorns and are deciduous. 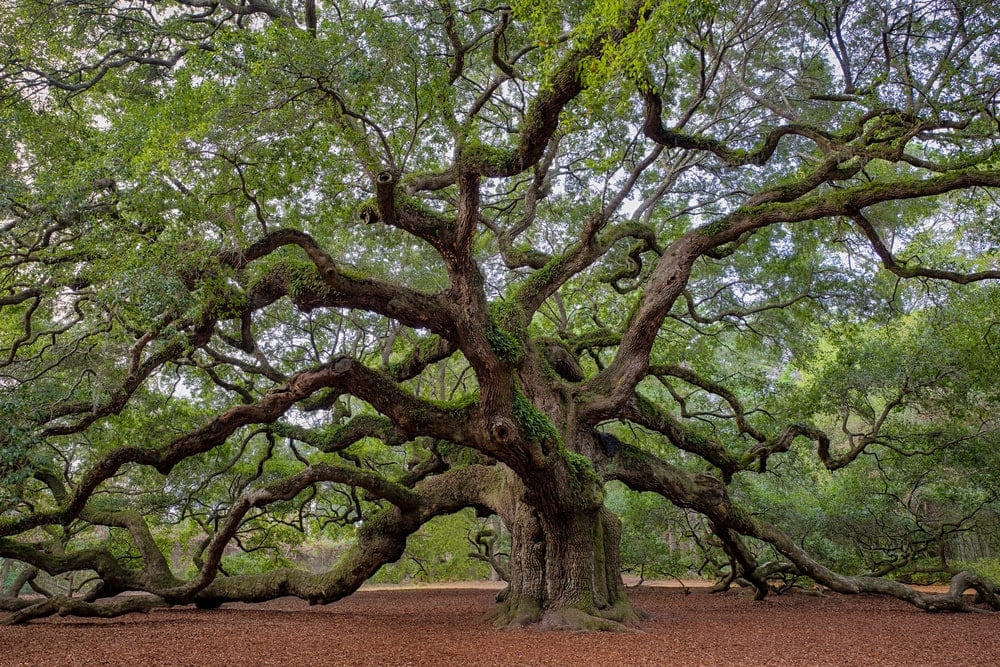 Native to the southwestern United States, southern live oaks are shorter with fast maturing acorns and are of the evergreen variety.

Native to the eastern United States, short oaks are obviously a short variety with uniquely shaped leaves and are deciduous. 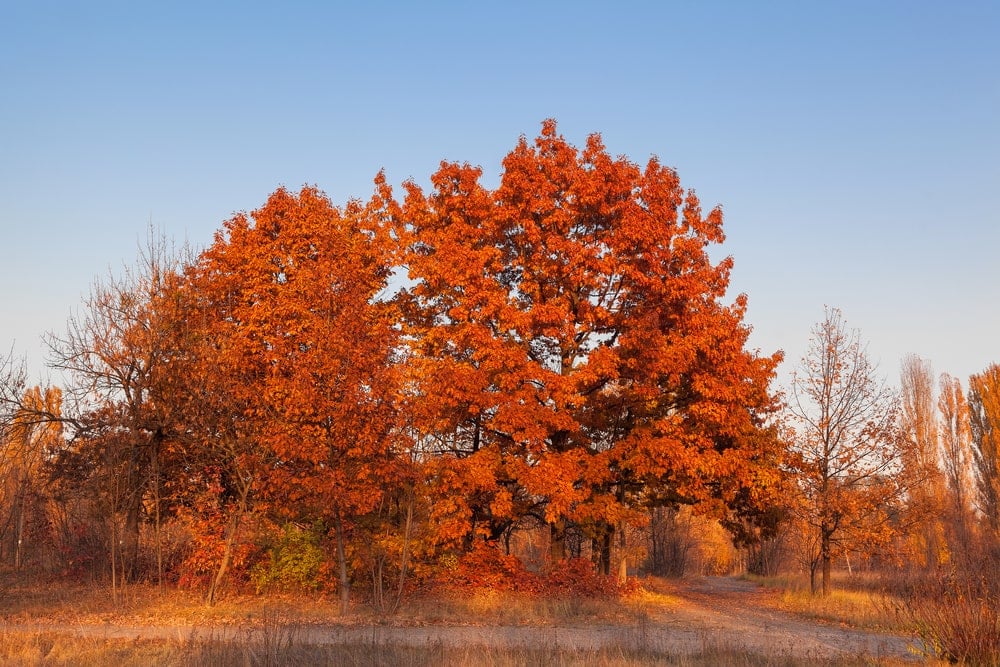 Native to central and southern America, red oaks are taller, acorns take longer to mature, and are deciduous. 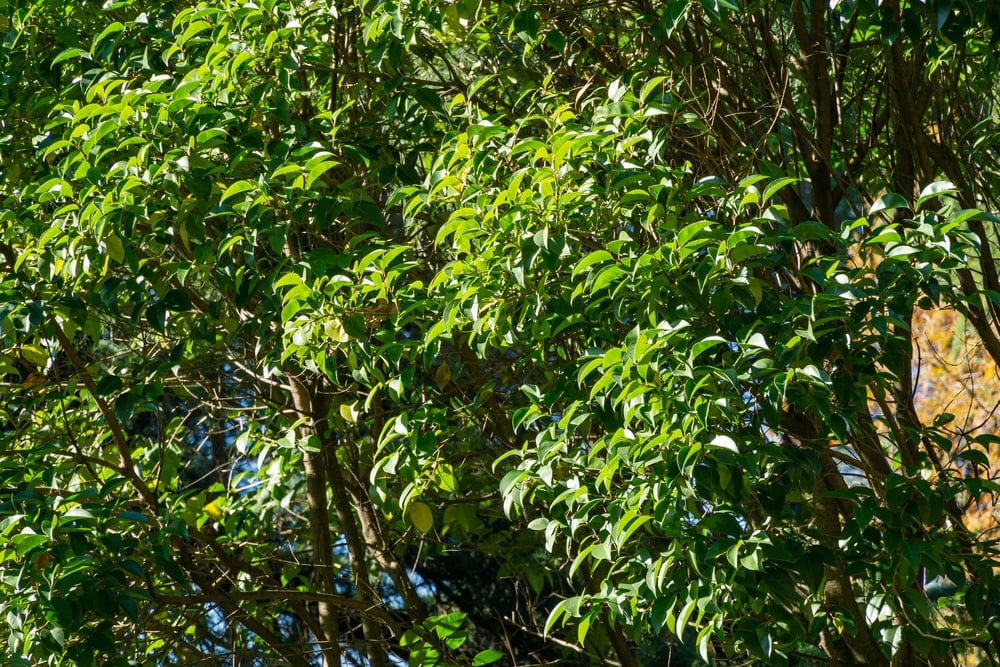 Native to eastern and southeastern Asia, ring cupped oaks have distinct acorns with cups with rings of scales, and they are of the evergreen variety. 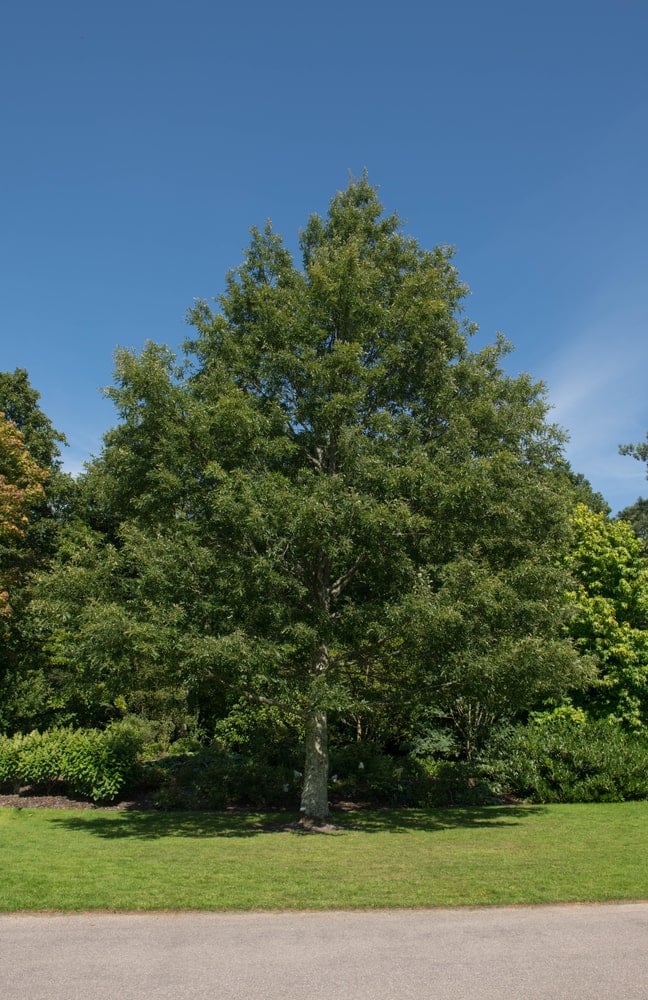 Native to Europe and Asia, turkey oaks are a taller variety with bitter acorns that take longer to mature, and they are deciduous.

Native Europe and Asia, Eurasian oaks are medium-sized trees with acorns that take longer to mature, and they are of the evergreen variety.

Where do Chestnut Oak Trees Grow?

Chestnut oaks are a very important member of the ridge top hardwood forests of North America. They’re a very prominent tree on the eastern side of the continent, a chestnut oak forest will grow from southern Maine to southwest Mississippi.

These trees grow the most commonly on rocky ridgetops and on mountain slopes. These regions occur in the USDA growing zones 4 through 8. They often grow alongside American beech trees and mountain laurel.

What are the Growing Conditions of Chestnut Oak Trees? 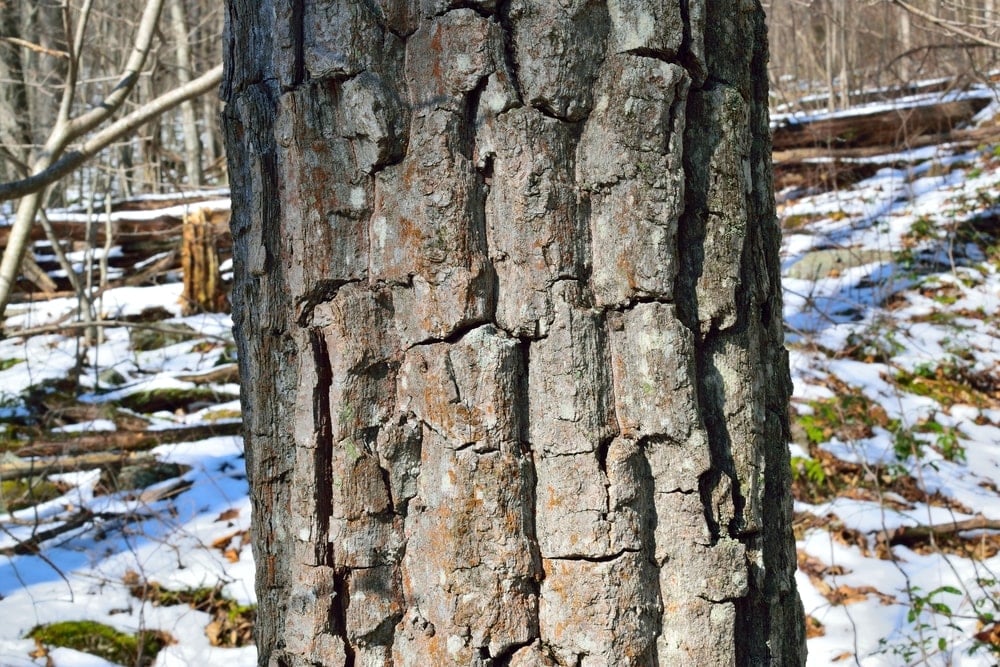 Chestnut oaks prefer soils that are well-drained, dry, and acidic. They can tolerant occasional drought and alkaline soil, but they are intolerant of soil salt, salt spray, and poor drainage.

Chestnut oaks are partially shaded tolerant but tend to grow their best with all-day sun exposure. This occurs on rocky ridge tops where there isn’t much forest canopy competition, but they end up being subjected to wind exposure.

What are the Damaging Agents to Chestnut Oaks? 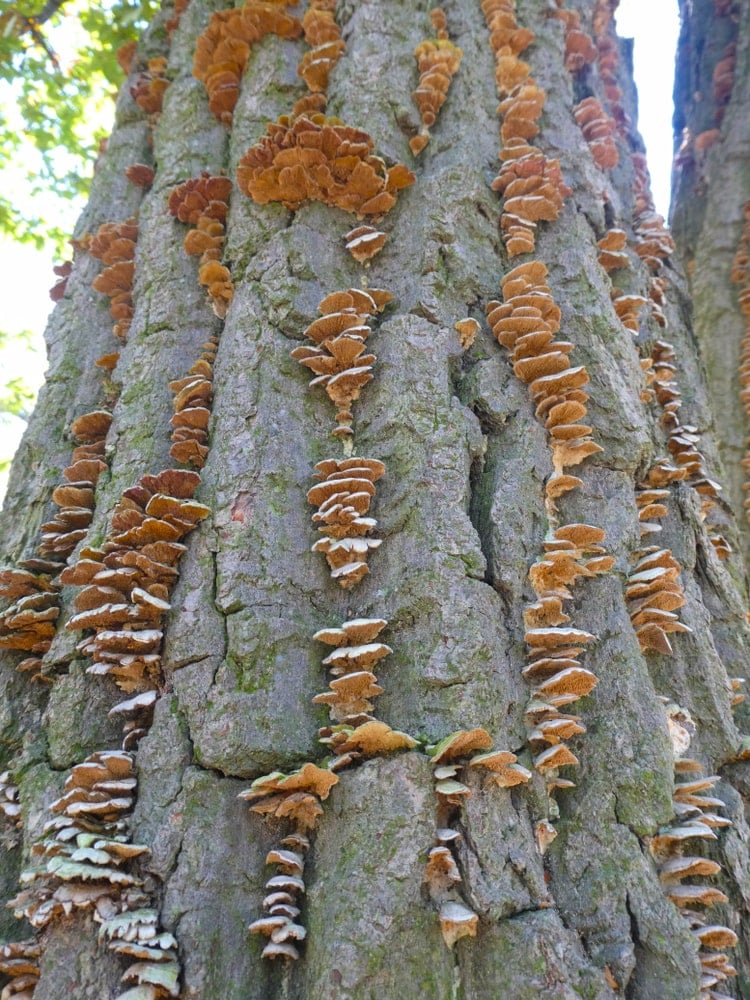 Oaks are very susceptible to oak wilt, especially if they are pruned during a dormant season. These open wounds that seep sap will attract beetles that carry the oak wilt fungus which can be very damaging to the tree.

Oaktree foliage is a very popular source of food for many kinds of defoliators, especially the gypsy moth.

Galls are caused by infestations of mites or other small insects that burrow into the tree. Luckily these pests are so tiny that they don’t actually cause much harm to the tree.

*Not to be confused with the American Chestnut tree, (which is part of the chestnut family), the chestnut oak is not a victim to chestnut blight.

How are Chestnut Oak Trees Used? 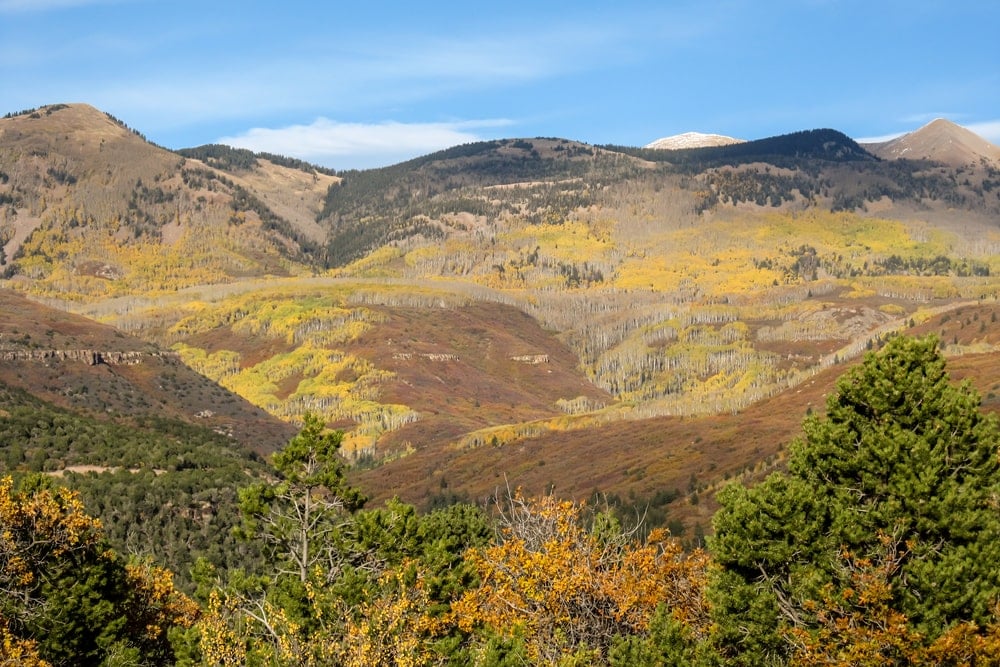 The wood of the chestnut oak is significantly less valuable than other species of oak wood. Its wood is tough, heavy, strong, close-grained, and is a light cream color. However, because branches start their growth low down on the tree, trunks end up being misshapen. This means that chestnut oak isn’t very valuable in the lumber industry.

The wood is used in the making of railway ties, fences, and as fuel. When these trees are found in better growing conditions, they will be marked as “mixed white oak” and labeled as a cheaper price than true white oak.

The inner bark of the chestnut oak tree has an incredibly high tannin content and was used very popularly in the past in the leather tanning industry. Because of the low quality of the wood, it was often discarded or used as fuel.

White-tailed deer, squirrels, raccoons, chipmunks, and wild turkeys all feed on the chestnut oak acorns that drop from the tree. Nesting birds and migrant birds will also use cavities in the trunk of the chestnut oak as a habitat.

The acorns of the chestnut oak are eaten by many forest-dwelling creatures; squirrels, chipmunks, raccoons, white-tailed deer, and turkey just to name a few. However, chestnut oak acorns are not consumed by humans.

Chestnut oak wood has a very high density (47 lbs/sq.ft) making it excellent firewood. This high density results in high heat capacity, so it burns slowly and very hot. It is a popular wood for fuelwood, and for meat smoking as well because of these characteristics.

Is chestnut oak good for smoking?

Chestnut oak wood has a very high density (47 lbs/sq.ft) making it excellent firewood. This high density results in high heat capacity, so it burns slowly and very hot. It is a popular wood for fuelwood, and for meat smoking as well because of these characteristics.

The wood of the chestnut oak tree is very hard dense, making it rather difficult to split.

The wood of the chestnut oak is significantly less valuable than other species of oak wood. Its wood is tough, heavy, strong, close-grained, and is a light cream color. However, because branches start their growth low down on the tree, trunks end up being misshapen. This means that chestnut oak isn’t very valuable in the lumber industry.

How do you identify a chestnut oak tree?

The easiest way to identify a chestnut oak tree is by its wood. It is incredibly deeply furrowed with massive scaly ridges.

Additionally, it can be identified through its leaves. Each leaf margin has between 10 and 15 lobes with shallow notches and serrated margins.

How tall do chestnut oak trees get?

When chestnut oak trees grow on ridge tops and mountain slopes they will grow to be between 18 and 25 meters tall. When these trees grow in areas with less wind exposure, they can sometimes reach heights of up to 42 meters.

Oak trees are very long-living, and when in the exact right conditions they can live to be 1000 years old! That being said, the chestnut oak tree exists in rather harsh areas, and will usually live to be around 250 years.

Oak trees are rather slow-growing trees, and will usually grow less than 12 inches in a year.

Are chinquapin and oak trees the same?

A chinquapin tree is a type of oak tree.