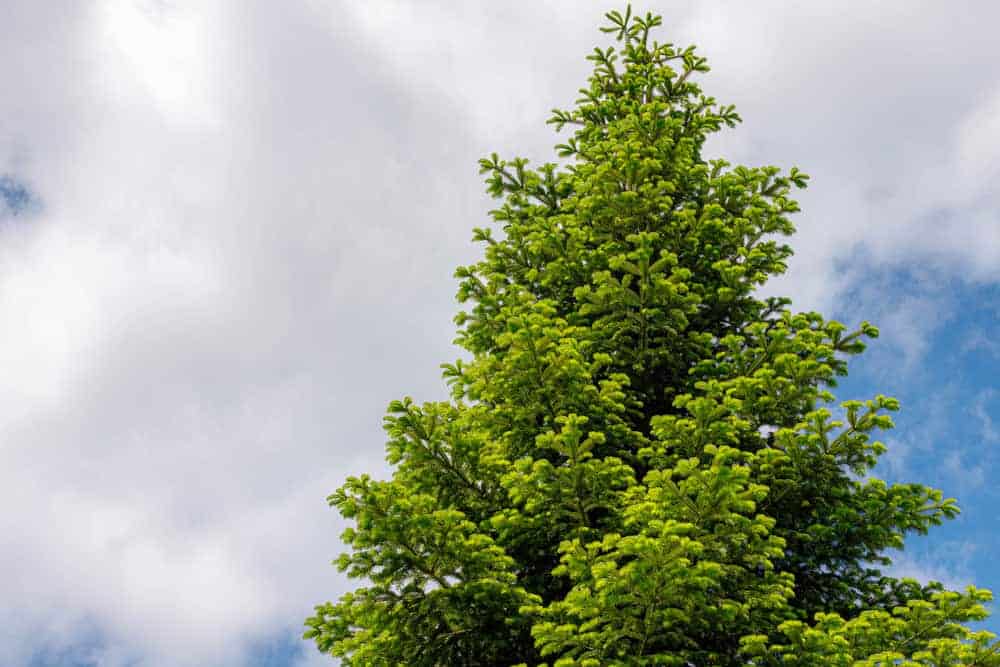 The black spruce tree is a tree native to North America, and they have ranged in all ten provinces of Canada and three territories. They are the official provincial tree of Newfoundland and Labrador and are the most prevalent tree in that province.

Part of the pine family, black spruces are a small and slowing growing, evergreen coniferous tree. They are sometimes referred to as the “drunken tree” because of the way their branches form and self-prune in areas with heavy windthrow.

Black spruces are found in boreal forests, swamps, and bogs, and though not particularly valued in the timber industry, they are very important to their local forest ecology. Because of their growing location, they have earned the nicknames “bog spruce” or “swamp spruce”.

They are also able to naturally hybridize with red spruces and white spruces, to make for a stronger genetic diversity.

Curious about other types of trees? Head on over to 101 Types of Trees! We also have more detailed descriptions of both White Spruce Trees and Red Spruce Trees for your interest!

Spruce trees will most commonly grow shallow and laterally wide-spreading root systems. Though their root systems may develop differently depending on the growing location. Their root systems are variable because the tree is so incredibly adaptable.

When black spruce trees grow in swamps and waterlogged areas, they will develop shallow and wide-spreading root systems, as they do not need to grow deep into the earth to access moisture reserves. However, these shallow roots make them susceptible to strong wind damage.

In more northern ranges which are usually more cold and dry, they will need to develop deeper roots in order to access water and to help protect them from being upturned by strong winds.

Depending on their growing location, a black spruce tree will be anywhere between 5 and 15 meters tall. When growing in swamps they will be much shorter and slower growing, and when growing in cold mountainous areas they will be taller and faster-growing. Their trunks are between 6 and 20 inches in diameter. 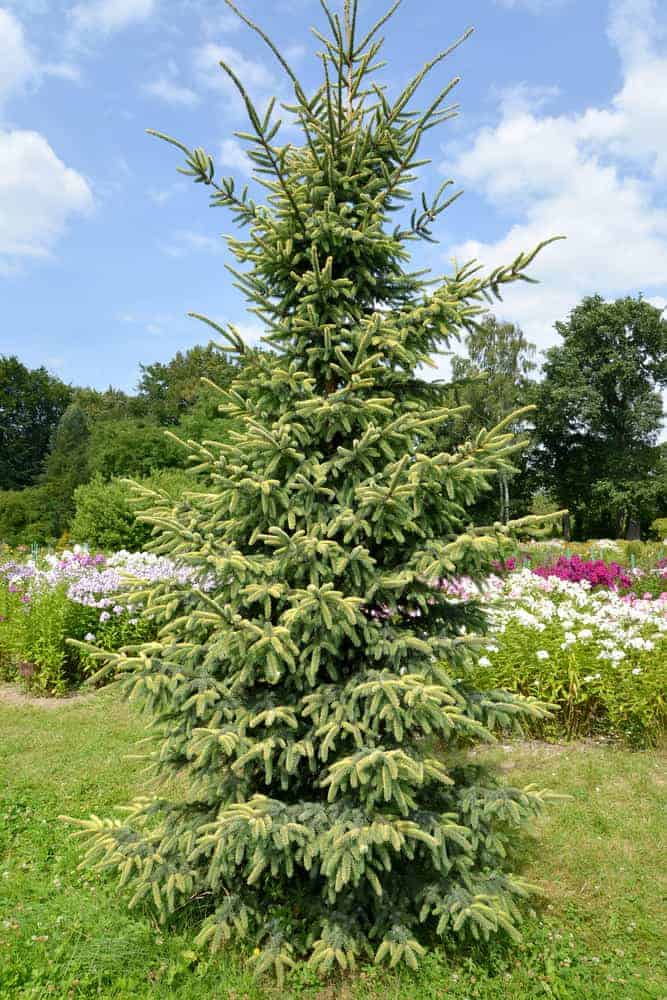 Black spruces have very straight trunks with very little taper. Their foliage tends to be quite scruffy in a narrow and pointed crown. Branches are compact, short, and have upward sweeping tips. Black spruce trees appear as being the least manicured species of a spruce tree.

Black spruce bark is very thin and scaly. It is a gray/brown color and peels off in small scaly plates.

The easiest way to identify a spruce tree is by its needles. Black spruce needles emerge directly from a twig or stalk, instead of growing in clusters. The needle-like leaves are 6-15mm long, and have 4 sides when viewed under a microscope.

A black spruce needle is stiff and long. It is pale green on the underside and a darker blue-green on the upper side.

How do Black Spruce Trees Reproduce? 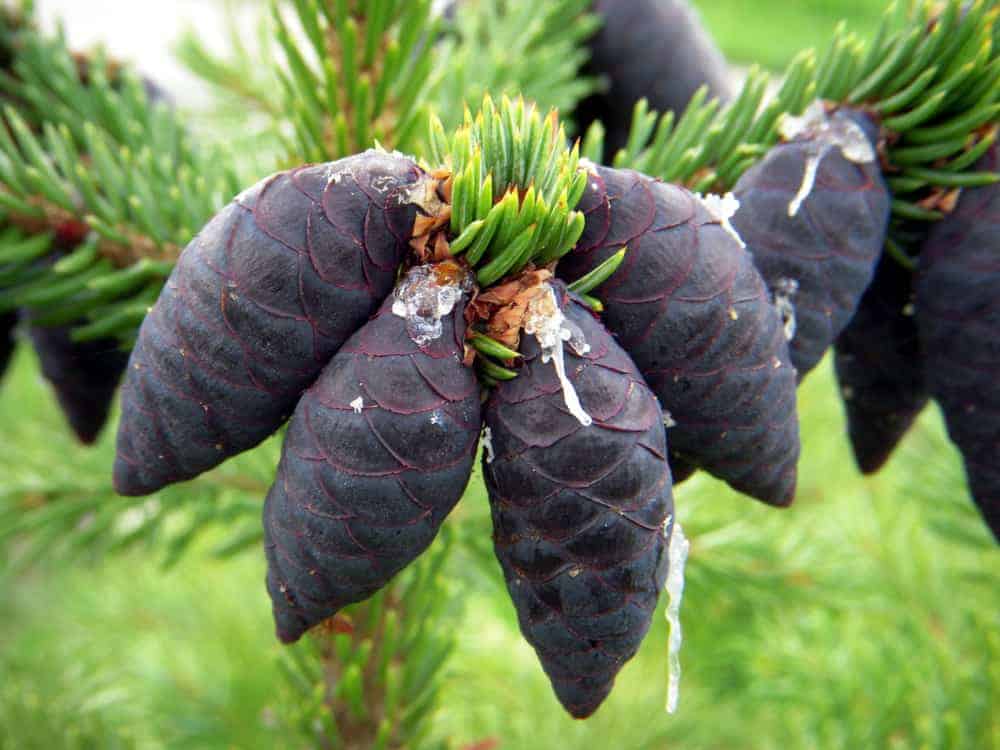 Spruce trees are monoecious, meaning that both female cones and male cones will occur on the same tree. This does not mean that they are able to self-pollinate. This is usually avoided to ensure that future trees have genetic diversity, which will make them a more resilient tree species.

Seed cones (ovule producing, female characteristics) are a deep purple that ripens into a red-brown color. They are roundly shaped and grow in dense clusters in the upper crown of a tree. Scales will open upon maturity in order to receive pollen.

Pollen cones (pollen-producing, male characteristics) are the same color and shape. Spruce cones will produce pollen in the early spring, and the pollen is dispersed by wind.

A black spruce cone is the smallest cone found on any spruce tree. Once they are mature (about 3 months after pollination) they will only be between 1.5-4cm long! After they reach maturity, they will remain on the tree for a handful of years before they are replaced with new growth.

Once pollen is dispersed, the female cone will close its scales in order to germinate and produce seedlings. The seed cone will droop down once it is mature (usually in summer or early autumn), which will make for easier seed dispersal.

Seeds are tiny and black and are attached to a single pale brown wing, which will help the seeds populate farther reaching areas. The cone will only open and disperse seeds if the weather is exceptionally dry. Sometimes cones will close up again if there is an unexpected rain.

Dispersal occurs throughout the fall and winter, and sometimes even into the next growing season. Black spruce seedlings are very tolerant to the conditions below mature spruce stands; which is usually very low light exposure and low moisture. This gives black spruce seedlings an advantage over other seedlings that have light and moisture requirements in order to germinate.

There are some white spruces that will start producing seeds as early as 4 years, though this is surprising considering their slow growth. It is more common for them to become sexually mature around 10-15. Their most productive crop years will occur around the age of 30 and beyond.

What Are Some Other Types of Spruce Trees? 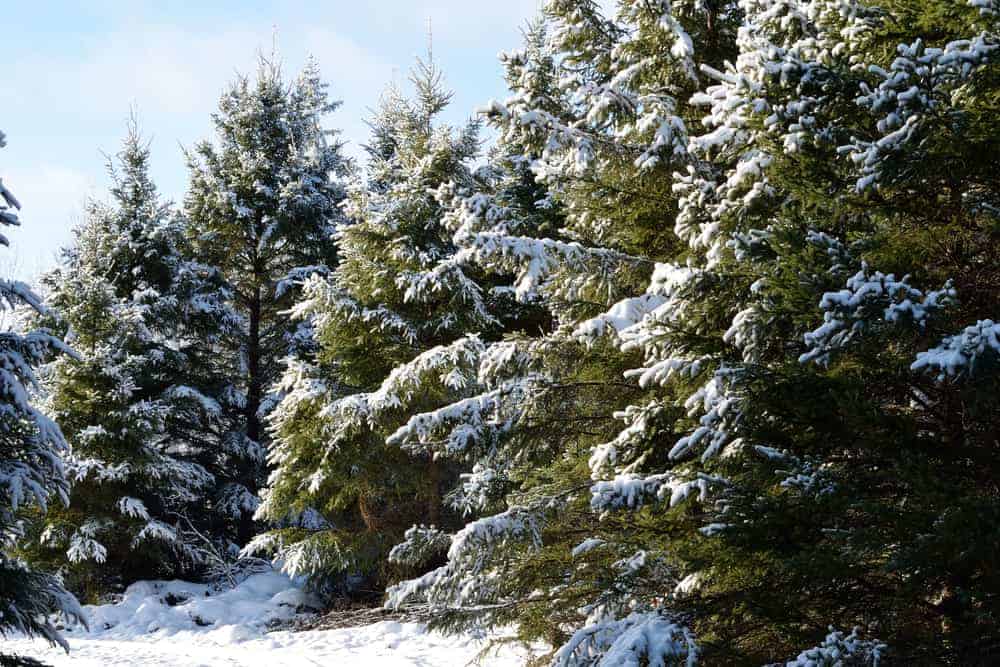 White spruce trees go by many different names. They may be heard of casually as Canadian spruce, skunk spruce, cat spruce, Black Hills spruce (because of their successful ranges in the Black Hills of South Dakota), western white spruce, Alberta white spruce, or Porsild spruce. 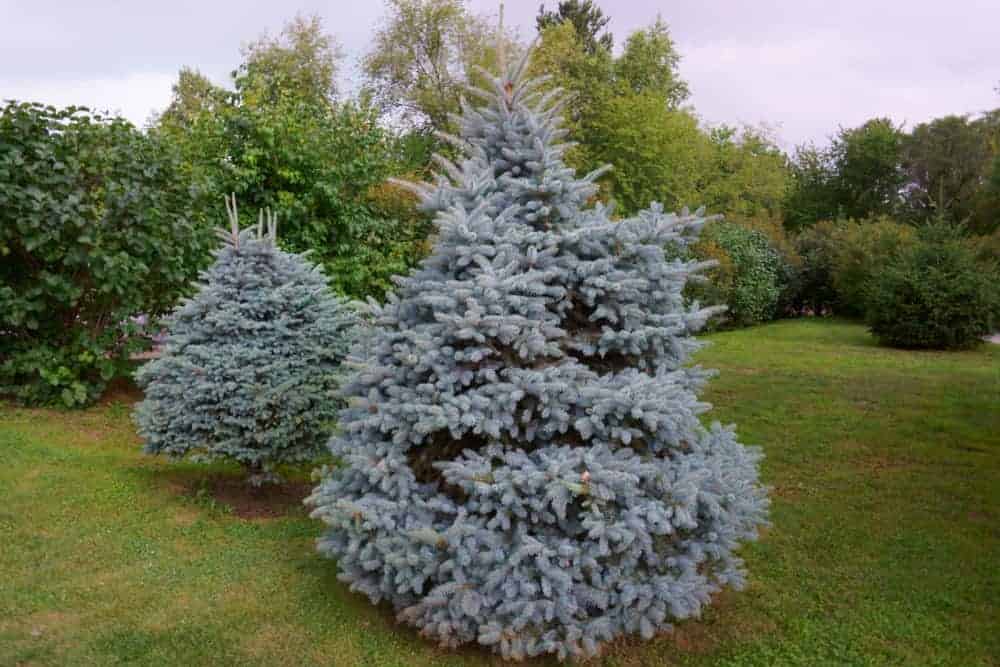 The blue spruce tree is native to western North America, specifically in places like Wyoming, Colorado, and New Mexico. They are also sometimes called green spruce, Colorado spruce, or Colorado blue spruce. They are medium-sized with horizontal leaves, and the sharpest leaves. 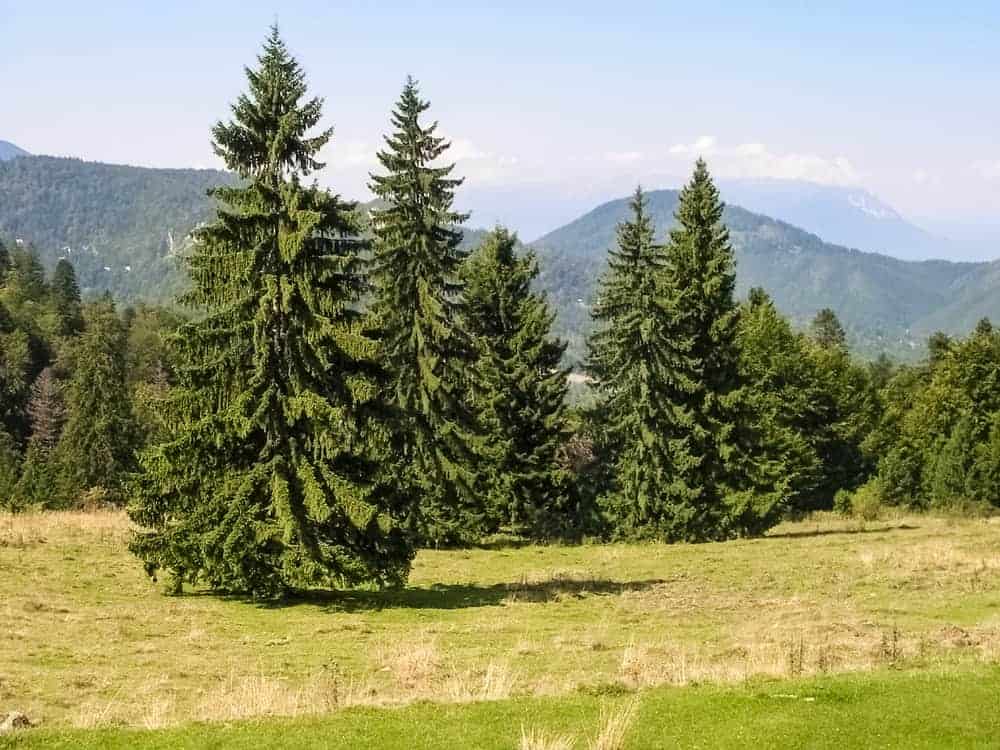 Norway spruce trees are native to northern, eastern, and central Europe. They have branches that hang down, and they have the largest cones of any of the tree species. They are commonly planted for their use of wood and as Christmas trees. 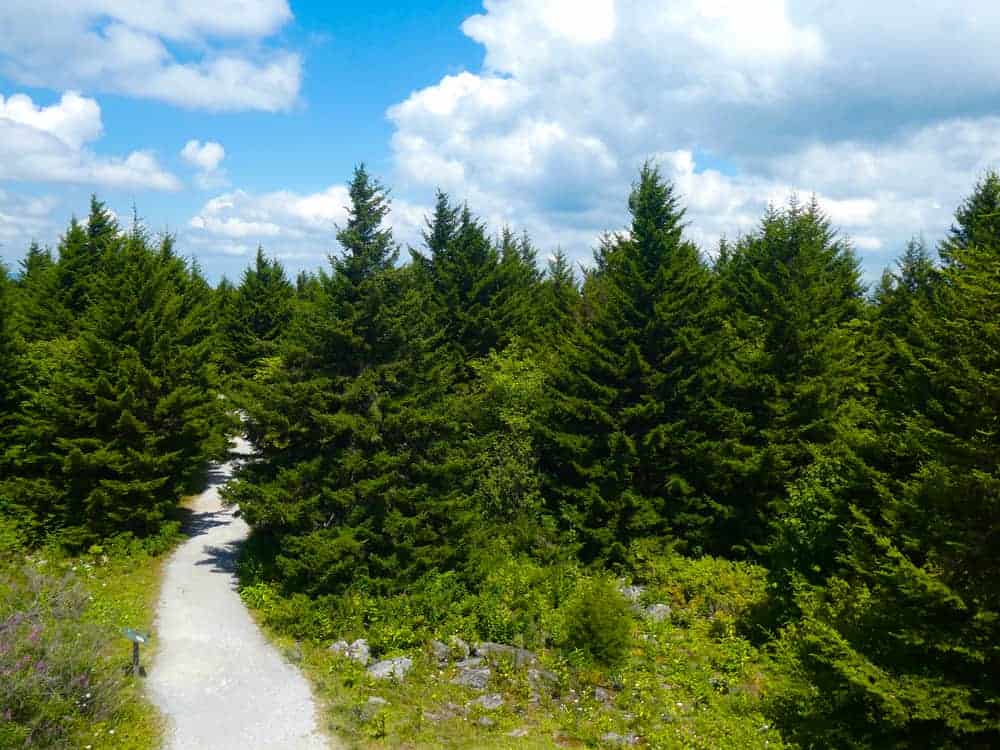 Red spruce trees are native to eastern North America. They are a medium-sized tree that grows in warmer climates than other spruce species. They are characterized by their red-tinged inner bark. 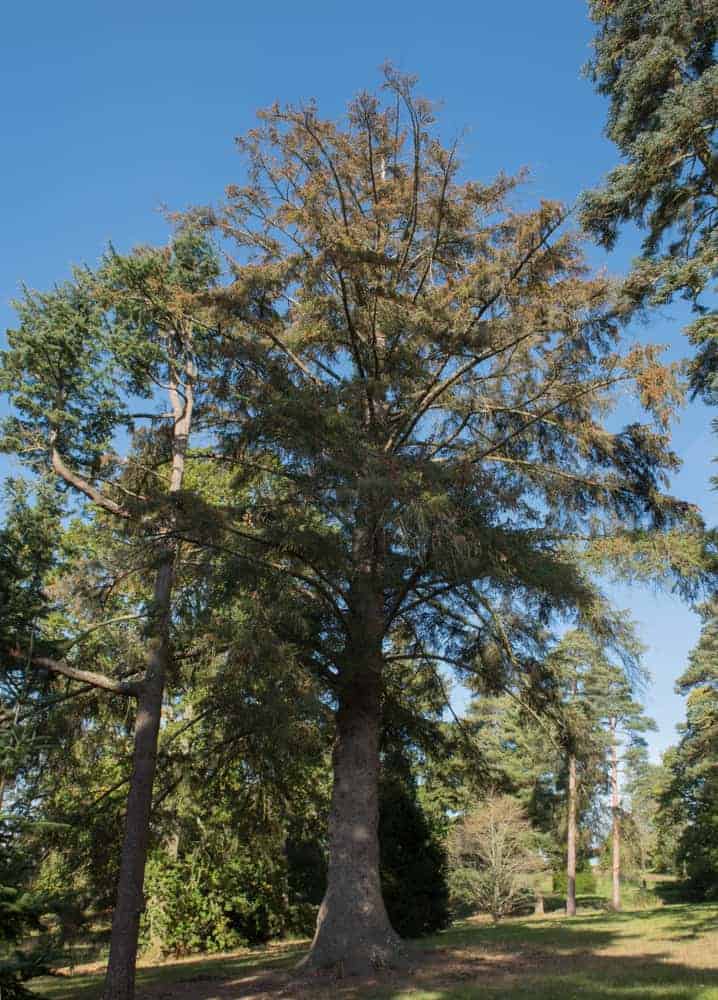 Sitka spruces are the tallest of all spruce tree species, and it is the 5th tallest tree of all conifers. They grow to be an average of 100 meters tall, and a trunk diameter of 5 meters. They are native to the western parts of the United States and Canada.

Where do Black Spruce Trees Grow? 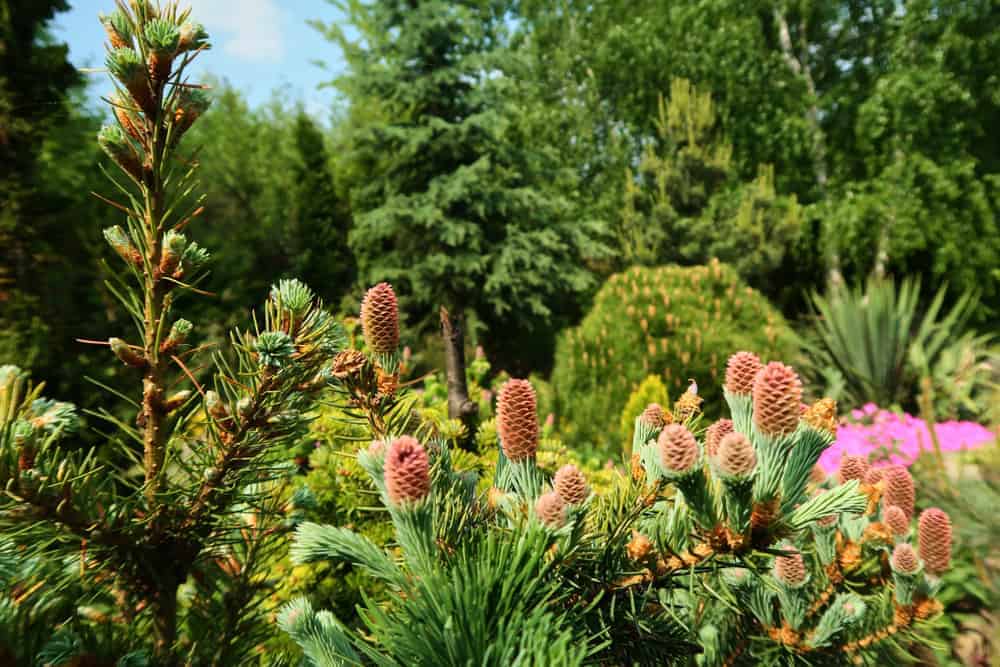 The black spruce is present in all 10 Canadian provinces and territories. There are natural groves in Alaska, as well as the most northeastern states of America.

They exist in the boreal forest biome and are found either near lakes, bogs, swamps, and other wetland locations or in very dry mountainous conditions.

What are the Growing Conditions of Black Spruce Trees? 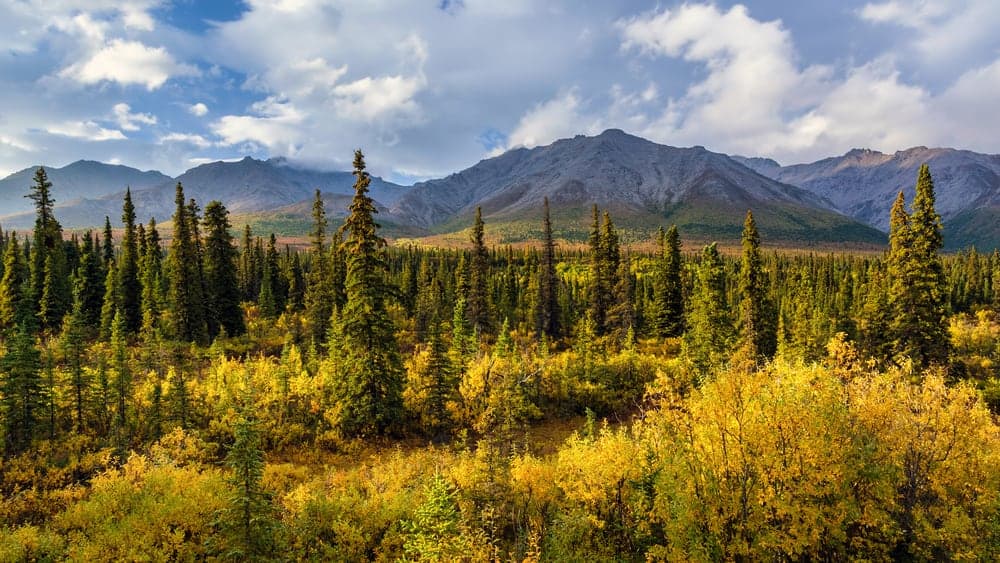 Black spruce trees are tolerant of many types of soil. They are very tolerant of soil with very low nutrients and are also tolerant of poorly drained sites. They can handle acidic peatlands, as well as alkaline dry soil.

They are prevalent in sphagnum moss-filled bogs and are a common pioneer species there. Once soil nutrients are reestablished and organic matter and fertility increase, black spruce trees will be replaced by balsam fir trees and white cedar trees.

Though this doesn’t affect the overall success of the tree, that is often the case with other tree species. They are also adaptable in the way that their seedlings do not require much sun in order to germinate.

What are the Damaging Agents to the Black Spruce?

Spruce trees have a common enemy, and that is the spruce beetle. An invasive species that is most prevalent in cold regions, they have destroyed upwards of 2,300,000 acres of spruce forests in Alaska alone.

They are also attacked by the spruce budworm, which is a parasitic moth larva that defoliates and ultimately kills the tree if it persists for several seasons. The black spruce forest is also susceptible to damage from canker, gall formers, aphids, leaf miners, leaf rollers, spider mites, weevils, borers, and pitch moths.

How are Black Spruce Trees Used? 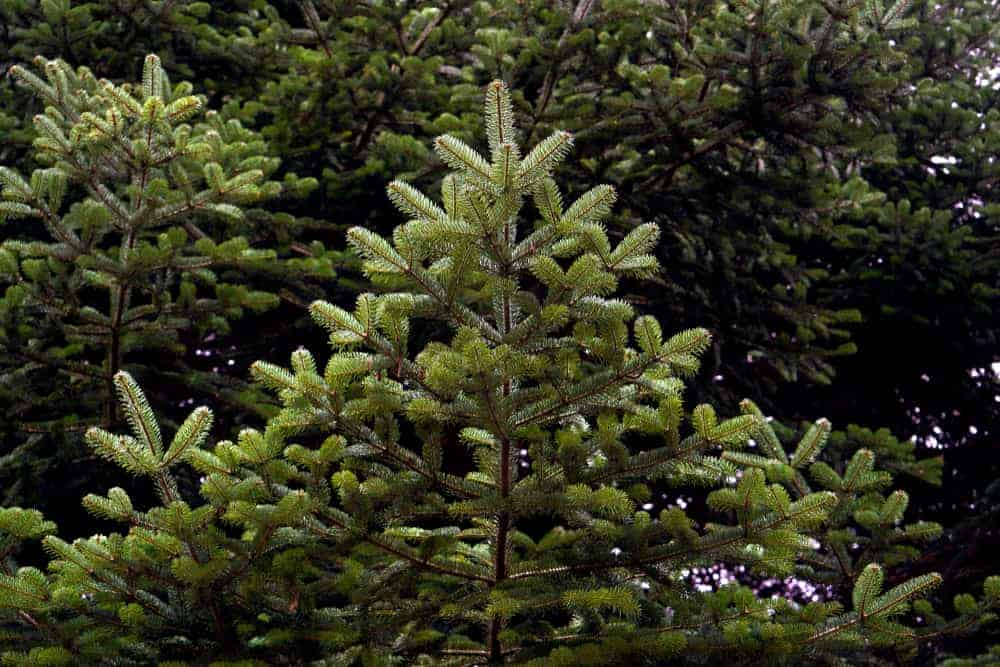 Black spruce wood has a fine, even texture and is straight-grained. The wood is a creamy white with a yellow tinge.

Black spruce is considered as being of low value in the timber industry because the trees don’t grow to be very tall. However, they are the primary source of pulpwood in Canada. Black spruce wood is also used as firewood.

Though they are no longer a very popular choice, the black spruce has traditionally been used as a Christmas tree. They are also a very popular cultivar for dwarf trees, as they are already small-sized that is easy to shape.

The seeds, needles, and twigs of the black spruce tree are browsed upon by white-tailed deer, spruce grouse, snowshoe hares, red squirrel, and many other mammal and bird species.

The black spruce is also a very important pioneer species. A pioneer plant species is the first species to repopulate a natural area after there has been devastation. This devastation could be anything from an avalanche, drought, flood, forest fire, or deforestation. Because black spruce seedlings are ready to germinate without any dormancy requirements, they are the forerunner in reestablishing a healthy forest ecosystem.

Along with the red spruce, black spruce goes into flavoring spruce gum and spruce beer. A little-known fact is that the wood used for making chopsticks is actually black spruce!

How do you identify a black spruce tree?

One of the easier ways to identify a black spruce tree is by its growth pattern. Because they tend to grow in harshly windblown areas, their growth is greatly affected. On the windward side, their branches will either grow in awkward directions or will be completely broken off, creating an asymmetrical crown.

The other way to identify a black spruce tree is by its dense foliage. Black spruce needles emerge directly from a twig or stalk, instead of growing in clusters. The needle-like leaves are 6-15mm long, and have 4 sides when viewed under a microscope.

A black spruce needle is stiff and long. It is pale green on the underside and a darker blue-green on the upper side.

How tall do black spruce trees get?

A black spruce tree will grow to be anywhere between 6 and 10 meters in its lifetime. They will be shorter trees near a swamp or bog, and on the taller end if they grow in dry, mountain regions.

The average life expectancy of a black spruce tree is 280 years. This will obviously vary depending on growing site and environmental factors, but there is a good chance that they will live long enough to become members of the old-growth community.

How is the black spruce as a Christmas tree?

What beetles infest the spruce trees in the black hills?

Infestations of spruce budworms are prevalent across spruce ranges, and especially in the Black Hills of South Dakota. The damage comes from the moth larvae of the spruce budworm. They will completely defoliate the tree. This will eventually kill the tree if the infestation persists.

What state has black spruce as their state tree?

It is said that the resin of spruce trees is quite similar to the smell of frankincense, though slightly more earthy and spicy.

Is black spruce a pine tree?

Is black spruce a hardwood?

Black spruce is labeled as softwood.

What is the difference between white spruce and black spruce?

What is the difference between red spruce and black spruce?

What is the difference between blue spruce and black spruce?

What is a black hills spruce tree?

The state tree of South Dakota is the black spruce tree, and there it is referred to as the “Black Hills spruce tree” for its prevalence in the Black Hills region.