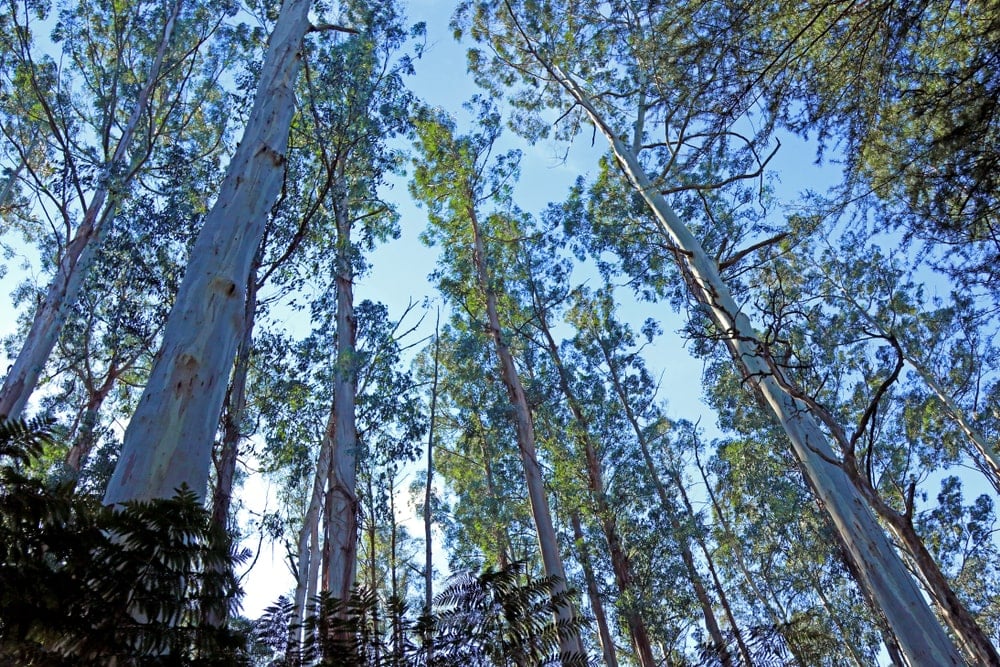 There’s something particularly special about walking through a forest and being able to recognize all of the silent and giant neighbors that surround you. We have a list of 101 Types of Trees from around the world that can help you learn more about your local forest community.

Black ash trees are a deciduous variety of trees — meaning that they shed their leaves annually, usually around the fall. If you’re lucky enough to live in an area with ash trees, you will get to witness the brilliant yellows, oranges, and reds, that they sport as the seasons cool. They are actually one of the first species of leaves to shed their leaves come fall time.

Nobody wants to be the bearer of bad news, but yes, all types of ash trees are currently on the critically endangered list. This is because they are under direct and malicious threat of an invasive species called the emerald ash borer. 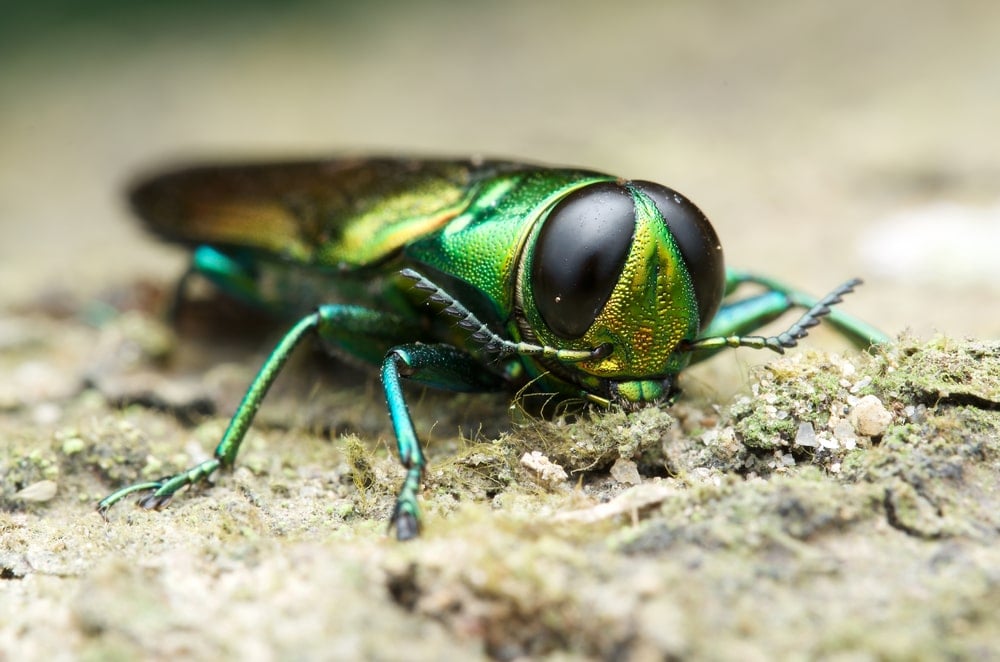 An invasive species is a species that is introduced to a foreign area where it is not part of the local ecosystem. When this occurs, the new species has no natural predators and has the opportunity to thrive uninhibited. The emerald ash borer (EAB) attacks only ash trees, which is where it got its name.

There around 7.5 billion ash trees in North America and over 5 billion of them have already been killed. Scientists presume that there will be no more ash trees alive before the next decade is over.

Because ash trees usually grow near bodies of water, or in wet forests, their leaves fall into ponds, lakes, and swamps. The tadpoles that are growing in these bodies of water eat the ash tree leaves because they have far fewer tannins in them than other species of trees. If there are not ash trees to help feed the tadpoles, they may not get enough nutrients to grow into mature frogs. 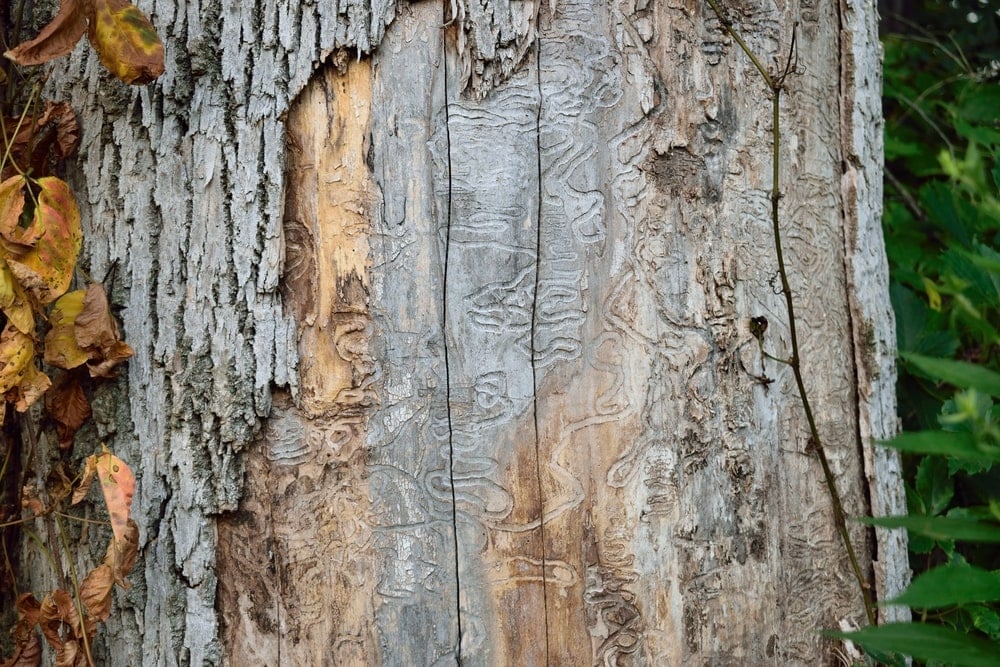 Where Do Black Ash Trees Grow?

Black ash trees are native species to North America. Many varieties of ash tree grow all over North America, but the black ash forests specifically grow in Newfoundland and Manitoba in Canada, and in Illinois and Virginia in the United States.

This ash species prefers to grow in mesophytic hardwood forests — this means that the growing environment is neither too hot nor too moist, neither too cold nor too dry. This includes both air quality and soil quality. This may seem picky, but many types of plants prefer this kind of climate. That’s why there are so many plants that only occur in North America!

What are the Botanical Characteristics of Black Ash Trees?

How are Black Ash Trees Pollinated?

Black ash trees are wind-pollinated. They have both male and female flowers, but we may not actually be able to recognize them as flowers. Instead what you will see in the early springtime, are small leaves forming in loose panicles. They have no petals, grow in tiny clusters, and appear more like a tiny bouquet of fluffs rather than flowers growing at the end of a twig.

The wind carries the pollen from flower to flower, and the black ash will then be successfully pollinated. The fruit produced by black ash trees is contained in small little winged pods called samaras. You may recognize them by their nickname, “helicopters”, for the way that they whir down to the ground. 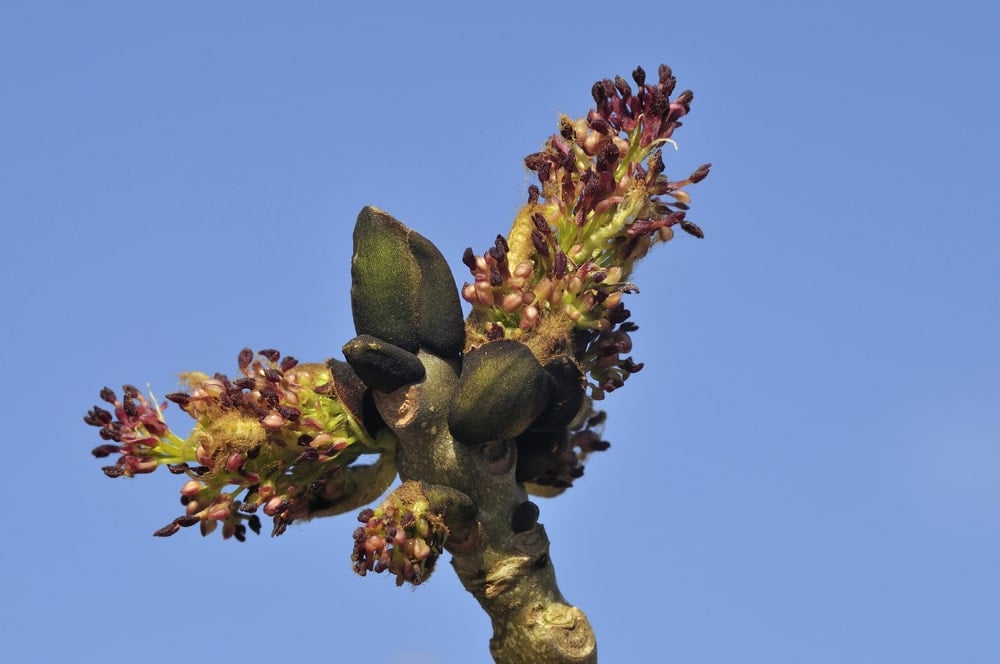 How are Black Ash Trees Used?

Small mammals and birds utilize the black ash tree as a habitat up in its high crown, safely away from earth predators. They are also the habitat for the long-horned beetle. The leaves of black ash trees are very low in tannin content and are more easily digestible than other tree species’ leaves.

Humans utilize black ash trees for the manufacturing of electric guitars and basses, as they apparently have good resonant qualities.

Native American peoples also use black ash trees in the art of basket weaving. Black ash wood does not have fibers that connect the growth rings together, making it very easy to strip the wood apart into flexible and sturdy pieces.

They have many different names for the black ash tree, including basket ash, brown ash, swamp ash, hoop ash, or water ash. All of these names are because of how the wood is used, or where the tree grows. 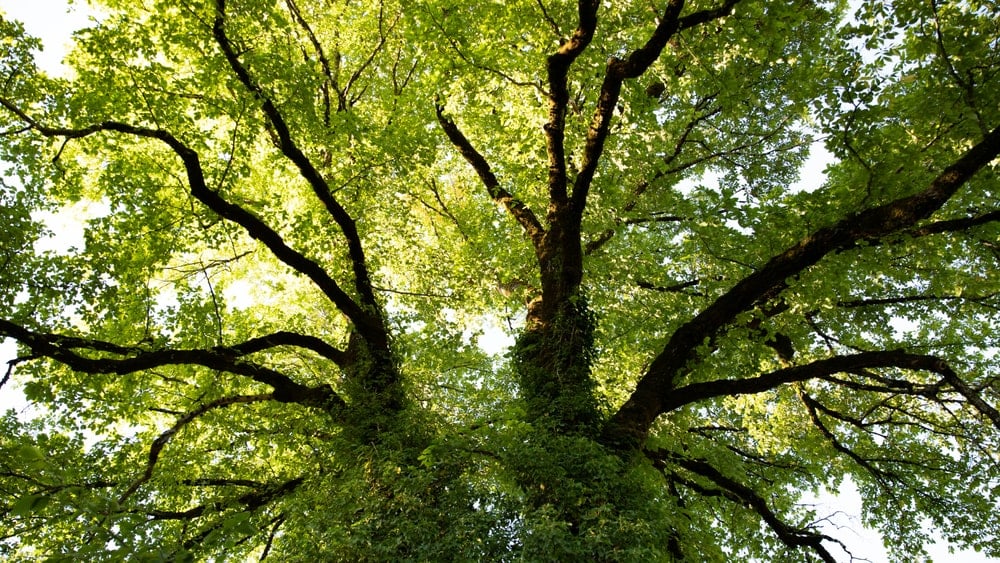 Curious about other kinds of wood for furniture and construction purposes? Check these out:

Black ash trees as well as all other varieties of ash trees are all on the critically endangered list. This is because they are under threat from an invasive species called the emerald ash borer. Before the decade is up, it is said that 99% of all ash trees will have died.

Do black ash trees have berries?

They do not! Black ash trees produce fruit in little winged pods called samaras. They are more easily recognized by their nickname, “helicopters” for the way that they fly to the ground in a spiracle pattern. Inside these pods are the seeds of the black ash tree.

Where do black ash trees grow?

Black ash trees grow in mesophytic hardwood forests. They prefer environments that aren’t too hot or too cold, not too moist and not too dry.

How do you identify black ash trees?

Black ash trees are rather stubby and wide, with grey scaly bark. They are recognizable for their samaras or winged pod fruits at the end of the branches.

Black ash trees commonly grow to heights of around 15-20 meters, with the width of the trunk hovering around 24 inches in diameter.

Black ash trees will stop growing around the age of 100, but their dying process is rather slow. Neighboring, younger trees will eventually beat them out for sunlight competition, and the older black ash tree will slowly decompose.

Where did black ash trees originate?

How do you distinguish between a black ash tree, a white ash tree, and a green ash tree?

Look to the leaves. Green ash trees have the same shape but are often smaller than white ash trees. Black ash trees are darker in color.

If you’re noticing black clusters on your ash tree, there’s a good chance that it is a large gathering of aphids around a wound in the tree.

A great, natural way to get rid of aphids is to introduce ladybugs into your garden. They are a ferocious predator to aphids.

How deep are ash tree roots?

The roots of black ash trees are considered as a medium to deep, with a depth reach of about 100cm.

Do ash trees have invasive roots?

They are considered invasive root systems because they grow laterally, and aren’t too considerate about sharing space. They will not avoid things below the earth, but simply push them out of the way. Another type of tree that does this is the red maple.

Can you burn ash tree wood?

Yes, but it is best to use healthy ash trees that are more mature. Burning greener ash would be smelly and cause a lot of smoke. Look for ash wood that is mature and dry.

Do ash trees have helicopters?

They do! These little winged pods are actually called samaras, and the round center is what contains the seed of the black ash tree.

How do you know if your ash tree is dying?

Pay attention to the leaves of your black ash tree. If they are starting to turn an unhealthy orange-brown color, there’s a good chance that has an infection (probably from the emerald ash borer) and will die.