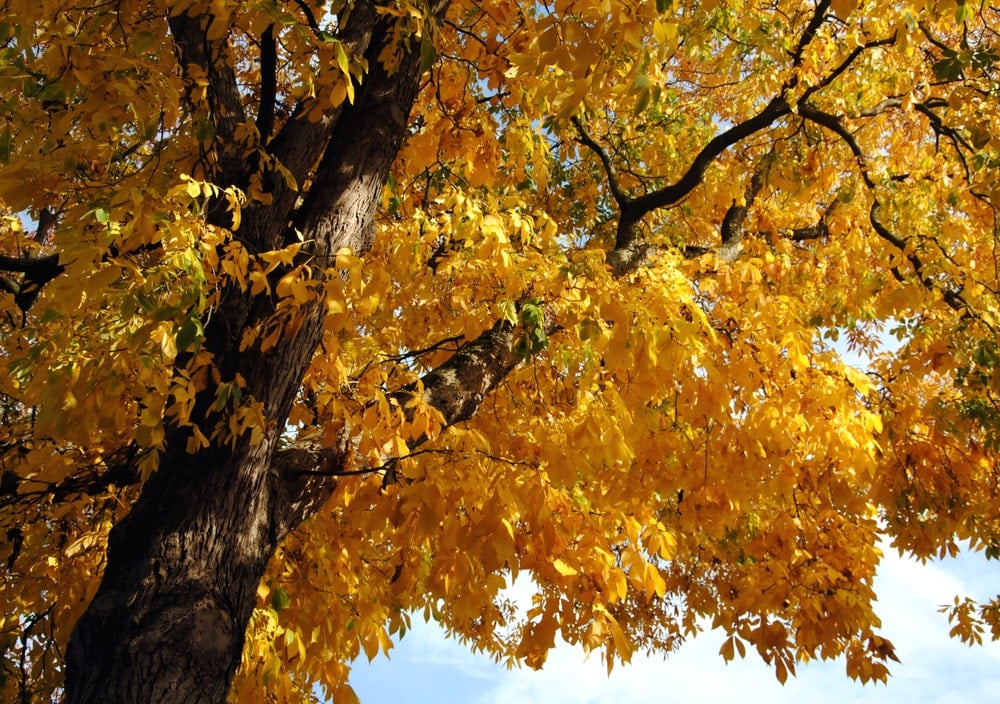 Being part of the genus carya is a privilege indeed. Carya cordiformis, or the bitternut hickory, is one of the least impressive trees relative to its botanical family, but it remains to be highly impressive all on its own, showing how incredible this entire genus is.

The bitternut hickory has valuable wood, a huge and expansive canopy, though like other members of its family, does create quite a mess as the shells from its fruit drop to the ground for an entire season.

Read on to learn more about the bitternut hickory, or head on over to 101 Types of Trees to check out what other cool information we’ve provided about our gentle, wooded neighbors.

Sometimes referred to as a “swamp hickory” or “water hickory” because of its tendency to grow near swamps and streams, the bitternut hickory is part of the Juglandaceae botanical family. It is rather similar in appearance to the pecan hickory tree, though their nuts are anything but edible.

Bitternut hickories are deciduous trees, just like all the other 18 members of the hickory species, and are one of the shortest-lived of all hickory trees. However, 200 years isn’t anything to laugh at! Clocking in at 200 still places them in the community of old growth forests.

Starting from bottom to top, the root system of bitternut hickory is a woody taproot — this is something it has in common with carrots! A woody taproot system is usually a small handful of root that tend to grow narrowly and deep into the soil, rather than shallow and wide-spreading.

Bitternut hickory bark is usually gray with a green tinge and is textured by narrow and thin ridges that form a loose diamond shape. Older trees have bark that usually starts to peel off in scales. Branches start to emerge quite low on the trunk, creating a very robust canopy.

Bitternut hickory leaves are quite large and long, and are compound — compound leaf meaning each leaf is comprised of 7-11 leaflets. These leaflets are lanceolate in shape, are a light yellow-green color, that is usually a paler shade on the underside of the leaf. Each leaflet has a serrated margin, and grow along a slender twig.

How do Bitternut Hickory Trees Reproduce? 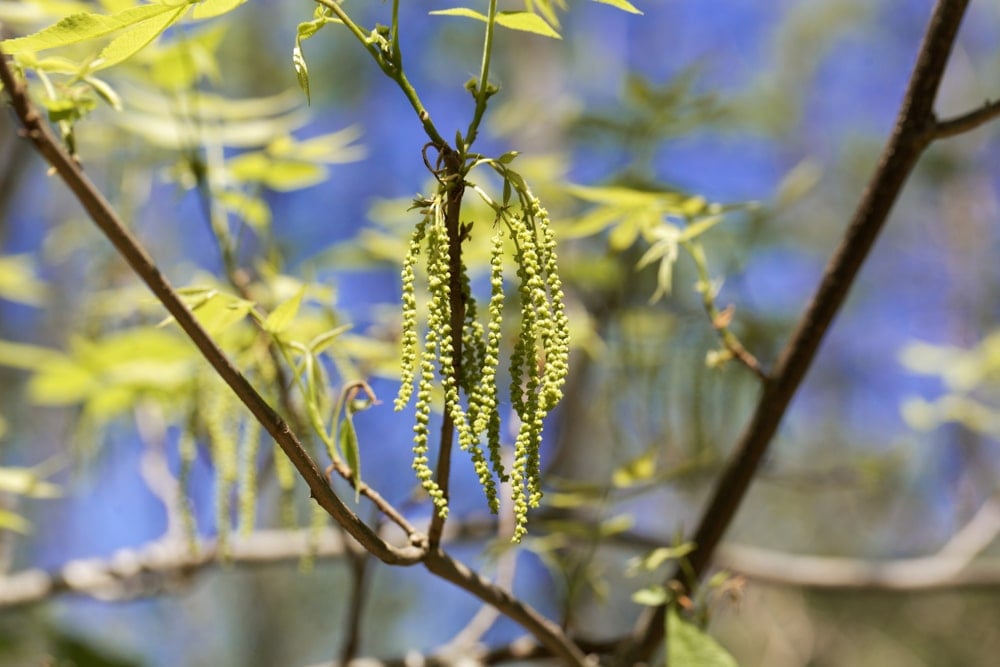 The flowers of a bitternut hickory tree are catkins, which are small clusters of flowers that are either apetalous or have very indiscriminate petals. Male flowers form drooping clusters and are very small and green. A female catkin is of the same color but grow in tighter clusters that are protected by spikes at their base.

Though the bitternut hickory has a flower of both sexes, they are not able to self pollinate, and therefore need help from pollinators. Otherwise, the wind will release pollen from the male catkins, which will then land on the female flowers, resulting in successful pollination.

The fruit that emerges from bitternut hickory trees does so in early autumn. They are a spherical nut with a four valved casing or husk, that eventually splits off once the fruit reaches maturity. Underneath is a hard shell. The casings that split off create quite an incredible mess that lasts all the way through autumn.

What are Some Other Types of Hickory Tree? 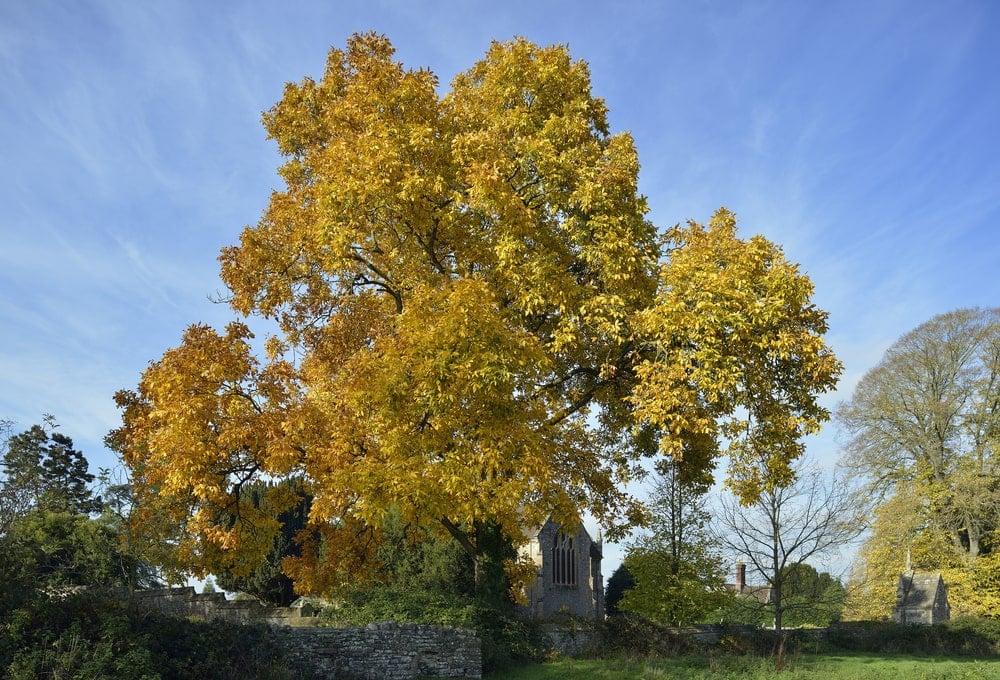 This variety of hickory trees can live to be over 350 years old! It grows naturally in certain areas of the eastern United States and southeastern Canada. It has characteristically shaggy bark, grows, and very sweet and delicious nuts. 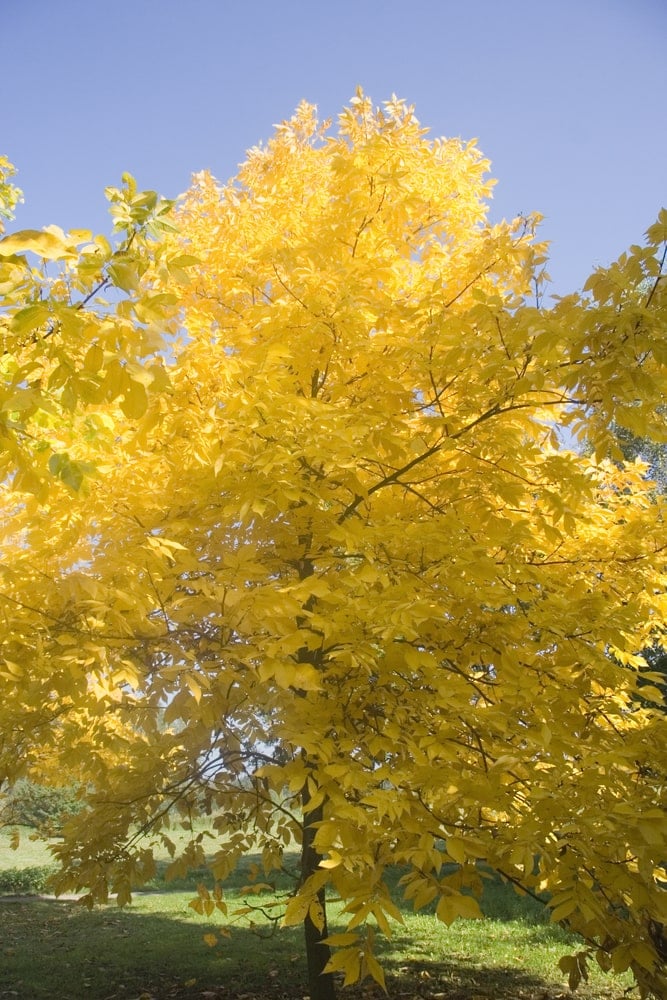 This variety of hickory is part of the oak-hickory forest of the eastern United States and Canada. Sometimes called a sweet pignut, coast pignut hickory, or smoothbark hickory, it produces a pear-shaped nut that has a delectable maple smell, and is popular among humans and animals alike.

This variety of hickory is the largest of all the hickories, usually exceeding 40 meters in height! It is sometimes called a bigleaf shellbark, kingnut, or big bottom, they produce very delicious and sweet edible nuts. 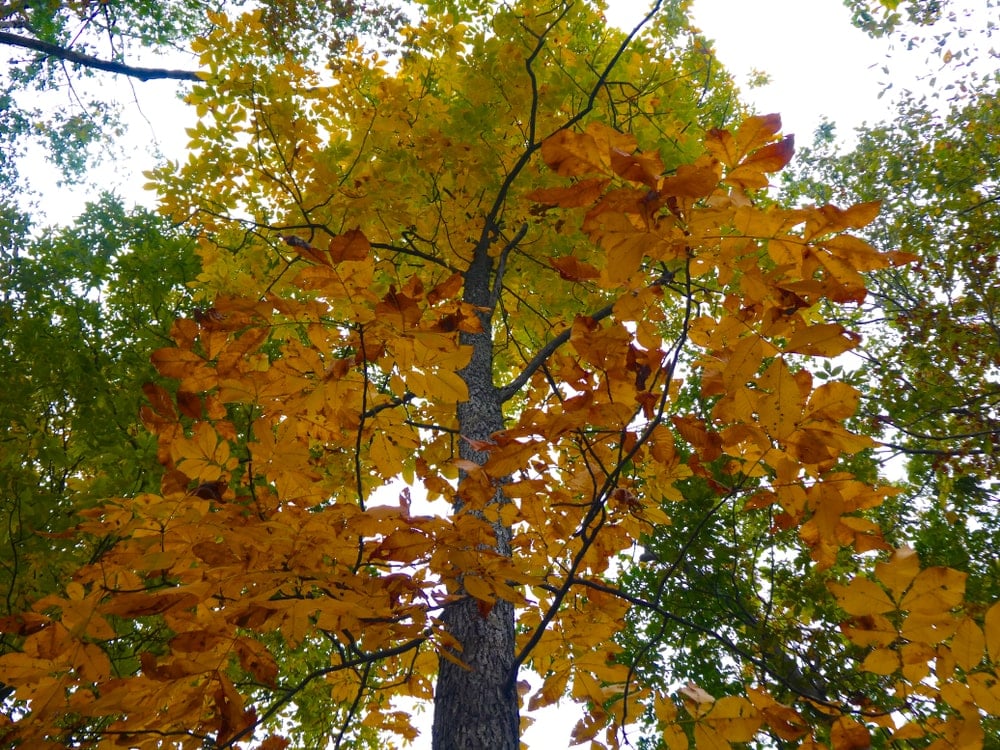 This variety of hickory is the most abundant of all hickories, and is incredibly long lived — sometimes exceeding 500 years of age! They are most distinguishable by the underside of their leaves, which are covered with very soft, downy hairs. The hickory nut they produce has a very small meaty kernel that is edible.

This variety of hickory is the most uncommon of all of its relatives. They are sometimes referred to as sweet pignut hickory, and the fruit they produce contains a small kernel of nutmeat that ranges from being very bitter, to semi-sweet.

This variety of hickory grows in different kinds of habitats, which are usually in more rocky and sandy landscapes. They are native to the southeastern United States, they are the smallest of all the hickory trees and produce a semi-tasty edible nut.

Where do Bitternut Hickory Trees Grow?

The bitternut hickory is a very well populated tree and covers many provinces and states on the eastern side of North America. They prefer more temperate climates and can be found in the USDA hardiness zones 4 through 9.

In the United States, they grow naturally in the following areas:

In Canada, they grow naturally in the following areas:

Out of all the different hickory species, the bitternut hickory is the most uniformly distributed and abundant!

What are the Growing Conditions of Bitternut Hickory Trees? 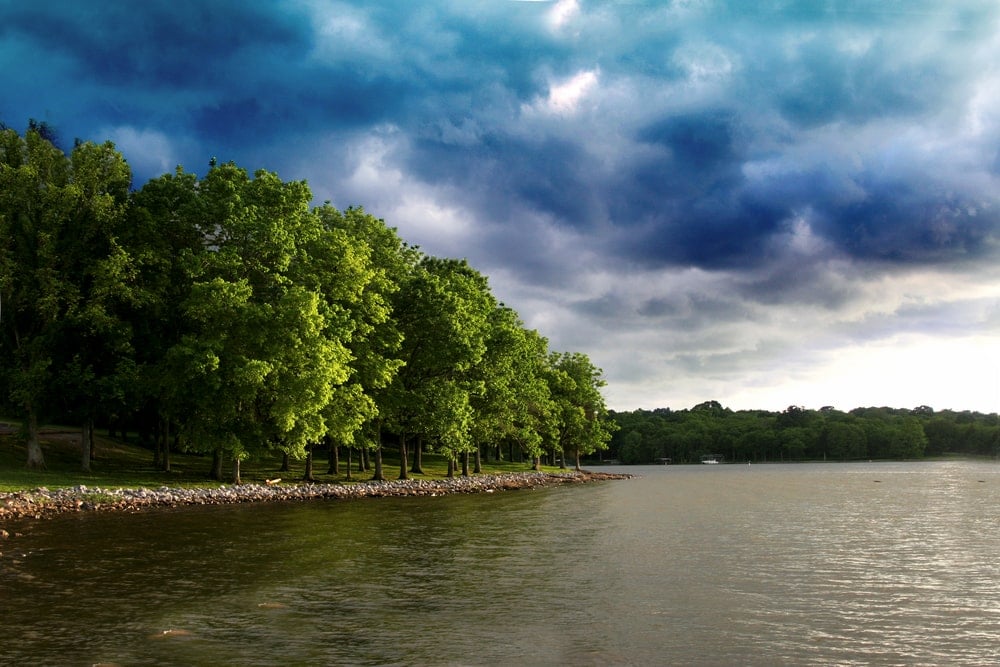 The bitternut hickory is a versatile tree and is able to tolerate almost any amount of moisture, and any type of soil. That being said, it certainly has specific conditions that will enable it to grow as tall and quickly as possible.

One thing that this hickory variety always needs is full sunlight — hence the reason why it grows so tall. They are usually able to beat out competitors for a spot in the forest canopy.

These trees grow very well in soils that have plenty of moisture, but it absolutely has to be well drained. These conditions usually exist in moist mountain valleys, wet bottomlands, and along stream banks and swamps.

However, they are also able to grow in soil that is much drier and has poor nutrient content, with varying levels of acidity or alkalinity.

How are Bitternut Hickory Trees Used?

Another usage that all hickory wood is used for, is for meat smoking. This is because when burned, hickory doesn’t smoke all too much, has a very high heat capacity, burns for quite a long time because it is so dense, and has a very recognizable and attractive smoke smell.

In terms of forest ecology, the nuts aren’t eaten by many animals because of their intense bitterness. However, the bitternut hickory seed and bark are eaten by rabbits, squirrels, and other small forest dwelling creatures.

Can you eat bitternut hickory nuts?

Of all the hickory species, the bitternut hickory produces a nut that neither animals nor humans should eat. They are incredibly bitter and are therefore considered as being inedible.

Bitternut hickory trees are rather slow-growing. They have very dense and durable wood, and slow growth enables wood to have these high qualities. They will usually grow around 1 meter a year, depending on their growing conditions.

How tall do bitternut hickory trees get?

The bitternut hickory is one of the shortest lived of all of its siblings, but that isn’t saying much. It’s relative, the mockernut hickory usually lives to be about 500 years of age, whereas the bitternut lives to be around 200. Either way, all species of hickory are part of the old growth category.

How do you identify a bitternut hickory tree?

Is bitternut hickory a hardwood?

All members of the hickory family are considered as hardwood. Because they are so slow growing, hickory wood has the time to establish a very dense, hardy, and thick wood.

How do you distinguish between the leaves of bitternut hickory and white ash?

What kind of habitat does a hickory bitternut like?

The bitternut hickory enjoys habitats that have full, uninterrupted sun exposure, and soils that are very well drained and moist. They prefer soils that are close to stream banks, wet bottomlands, and swamps.

Can you grow a hickory tree from a nut?

It is possible to grow a hickory tree from its nut, though the nut needs to be heat-treated in order to break through its hard and protective casing. Not all nuts will successfully germinate, but it is one of the less expensive ways of growing a hickory tree.

Squirrels will eat the seeds of a bitternut tree, but the nut has proven to be too bitter for even forest dwelling mammals to enjoy!

How deep are hickory tree roots?

Hickory tree roots have a woody taproot system, meaning that fewer roots will grow deep into the soil in a narrow manner, rather than growing in shallow soil in a more widespread manner. This is because they are moisture loving, and try to find as many ways as possible to reach the water.

Do hickory trees lose their leaves?

Hickory trees are of the deciduous variety, meaning that each fall they will drop their leaves as colder months approach. They do this because they go dormant in the winter. They do not photosynthesize, and therefore they do not grow in the winter months.

Once spring comes around again, leaves will sprout and they will have an enormous growth spurt.

Are hickory nuts and pecans the same thing?

Not at all. Some varieties of hickory trees produce an inedible, bitternut, and pecans grow on a different variety of trees altogether and produce delicious nuts! The pecan tree!

Once a hickory tree reaches maturity, it will produce some seeds every year, but it is only about every 3 years that they will produce an enormous crop. This is good for landscapers and homeowners with hickory trees on their property, as big crop years produce a ridiculous mess of nut casings.

What is the difference between a black walnut and a bitternut?

Black walnuts and bitternut trees really aren’t all that similar. They are of different sizes, shapes, and produce fruits that are easily distinguishable from one another.

What pests affect the bitternut hickory?

Bitternut hickories are luckily a very tough tree and don’t have to deal with all too many pests. There is the hickory bark beetle that can prove to be a bit of a nuisance, nibbling all too generously on its foliage, but the tree is able to produce a chemical that eventually deters the beetle.