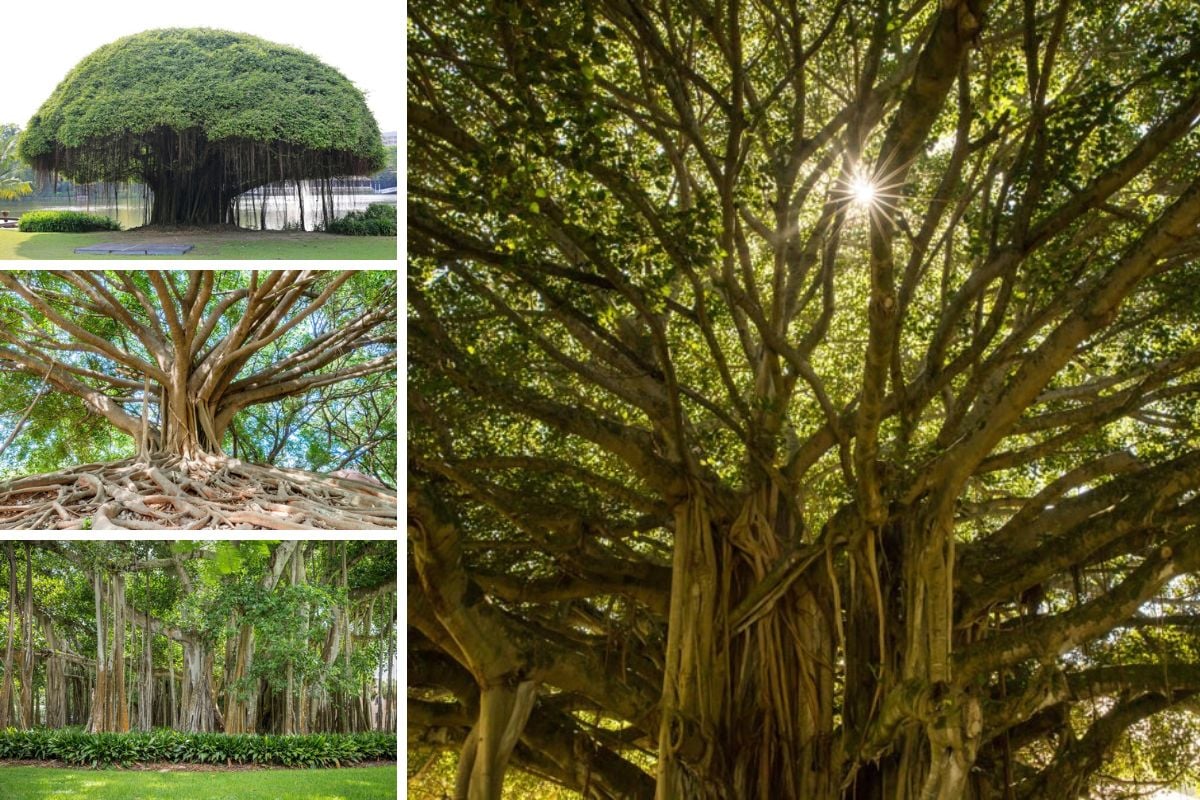 You would be considered as a lucky duck to ever see a banyan tree in person. Living in North America, it is uncommon to see a tree that has roots that grow aerially (we’ll explain what that is in just a moment). 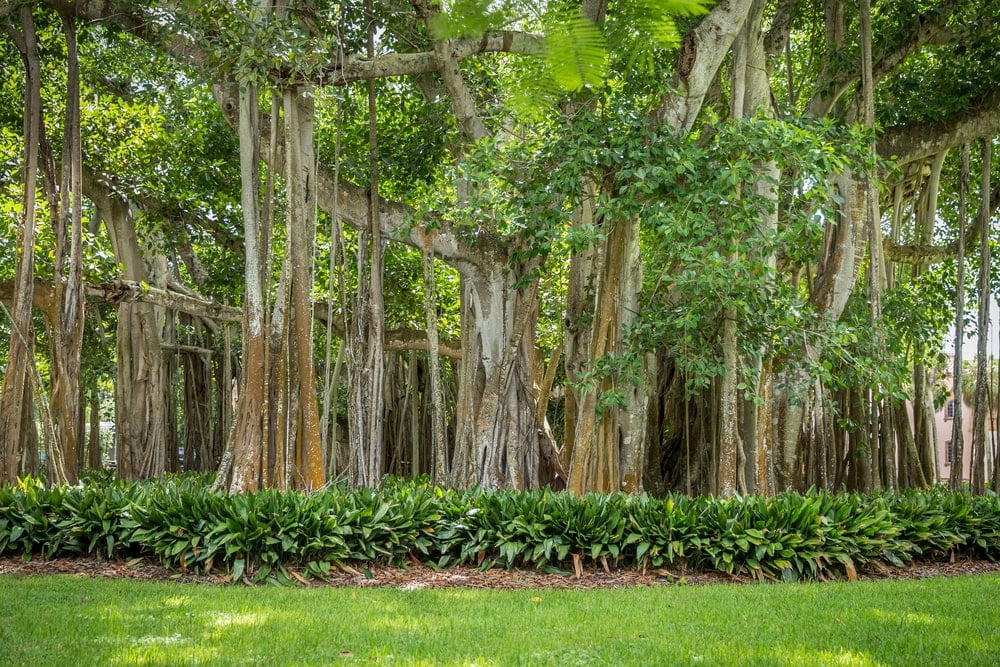 A tree that can be grown in a large backyard, in a pot, in the wild, or as a bonsai variety, the banyan tree not only produces figs, and plate-sized leaves, it has spiritual significance as well. So in celebration of all trees, large, small, standard, and strange, we present you: Exploring the Banyan Tree.

Check out this bonkers list of 101 Types of Trees!

The banyan tree is of a deciduous, evergreen variety. Deciduous means that the tree will shed its leaves annually (usually around the fall season), but evergreen means that the leaves will stay a vibrant green color — not like aspens and oaks that change to yellow and reds as colder weather approaches.

The ficus benghalensis is of the ficus species (genus ficus), and are most commonly correlated with tropical forests, although they are able to thrive in a large garden as well (as long as you live in a region that doesn’t experience frost).

Like all other trees, the banyan functions by being nourished by sunlight, water, and nutrients in the earth. The leaves of the tree absorb the energy from the sun through photosynthesis and convert water that’s sucked up through its roots into sugar.

And lucky for us, the banyan tree (like all other trees) converts carbon dioxide into oxygen, making the earth a far more tolerable place to live for humans. 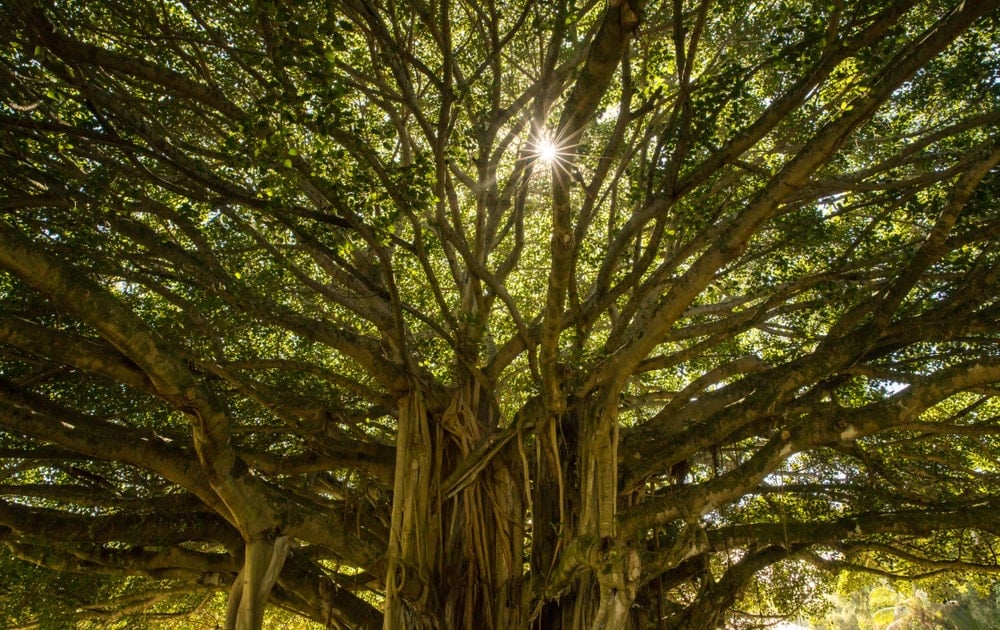 This odd tree begins its life as an epiphyte — this means that seed will successfully germinate when dropped in the crevice of another tree. If a seed is dropped in the earth, the likelihood of it being eaten is very high. An epiphyte plant will eventually kill its host tree as its roots develop. This is why the banyan tree has been awarded the nickname, “the strangler fig”.

As the host tree decomposes, the banyan grows into a columnar, and hollow trunk, which provides a helpful shelter for many small mammals, birds, and bugs alike. Most importantly, the banyan tree provides food and a habitat for the fig wasp, which in turn, pollinates the tree.

The roots of banyan trees may be a little bit unexpected considering its enormous size. Aerial prop roots are a root system that other swamp-dwelling plants share (like orchids). Instead of growing deeply into unstable soil, they grow laterally over wider areas. The weirdest part is that the roots grow aerially which then hang down, and take root wherever they drop.

Upon first glance, it’s almost difficult to tell what is a branch, a root, or a trunk!

Part of the fig species, and their bear many of the same genes. Banyan trees bear fruits called syconium — these are enlarged, fleshy fruits with multiple ovaries in the centre. You’ve seen a fig, you know what we’re talking about. 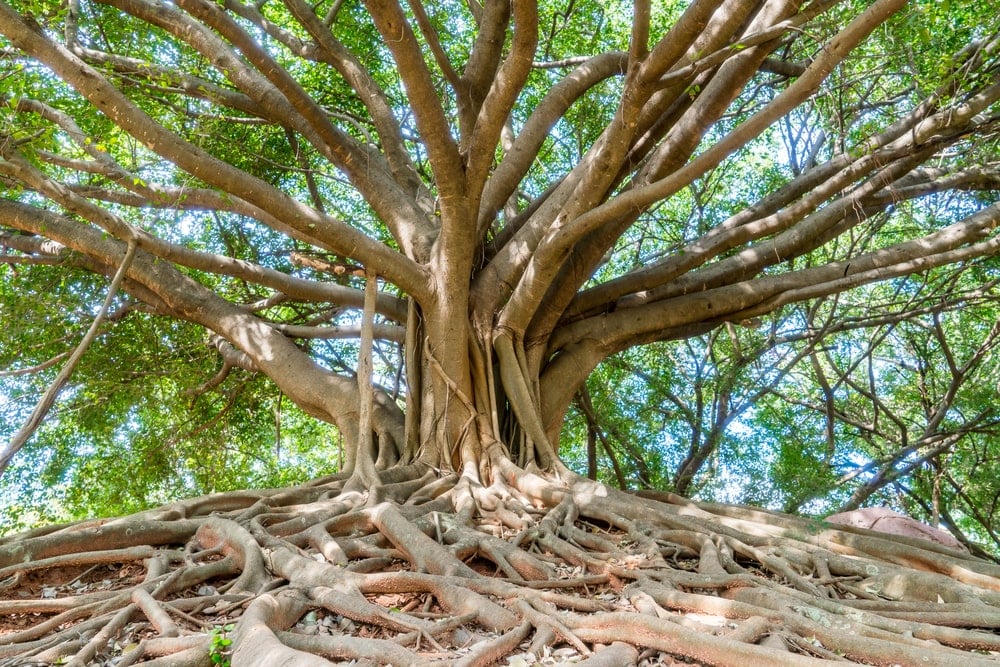 Banyan trees really love a lot of water, and will usually grow by swamps. However, they are very resilient when it comes to draughts as well. What they will not tolerate is any frost at any type of year.

They prefer well-drained and moist soil that is very nutrient-rich. And yes, they can be grown indoors as long as their pot isn’t too large. It is advisable to avoid planting banyan trees near any sort of foundation, piping, or pavement, as the root system will easily damage any sort of infrastructure.

Different species of Banyan tree grow all over many awe-inspiring locations; Australia, Bangladesh, China, India, Nepal, New Guinea, Pakistan, Iran, Sri Lanka, and Taiwan. There are one species of fig tree called The Florida Fig that grows strictly in Florida as well.

*Hold up! There is also a banyan called the Lahaina Banyan tree. This tree was planted in Maui in 1873 to represent the first American Protestant Mission in Hawaii. We don’t love colonialism, but we do love banyans! 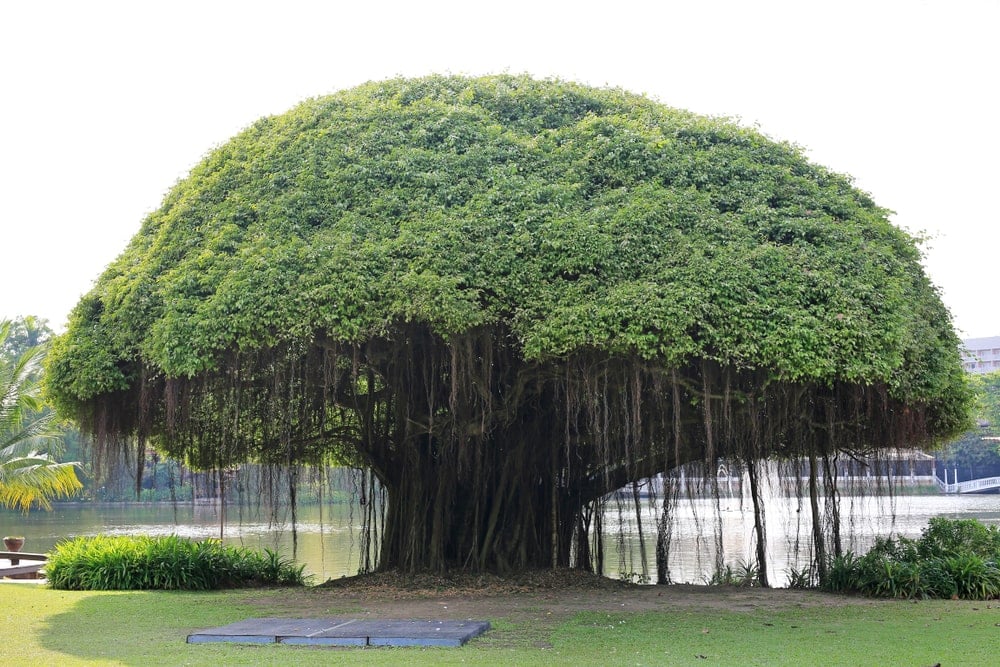 Due to its spiritual significance, the banyan tree is not cultivated for building purposes. It is cultivated as an ornamental tree. However, it is common for folks who are local to banyan growing regions, that they will use a banyan leaf as a plate!

The hollow trunk of the banyan tree is kind of a sanctuary, a place of safety and refuge for small mammals, birds and insects. 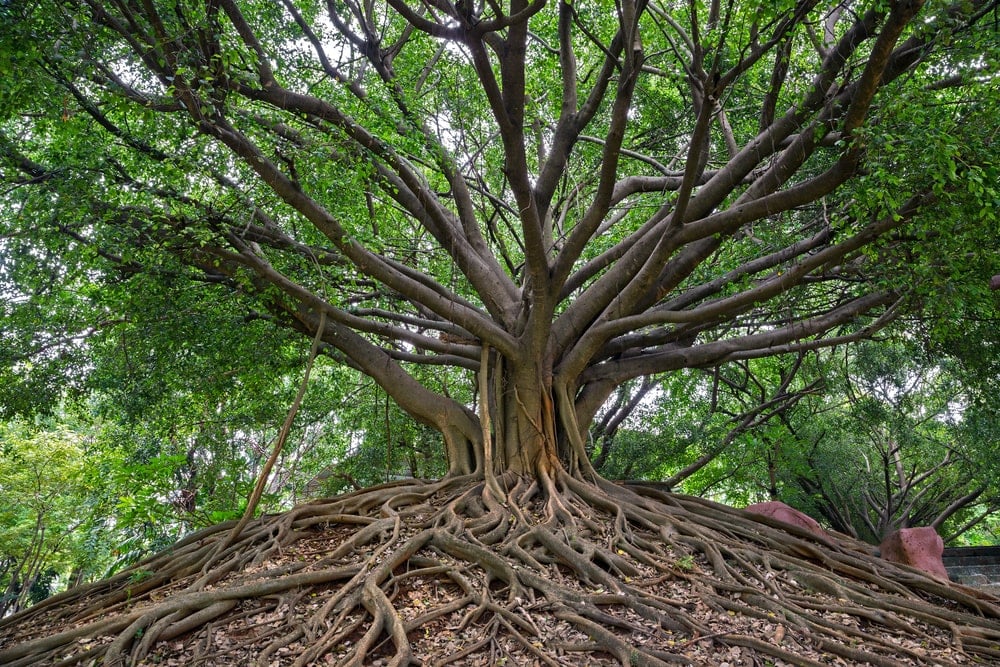 All part of the urostigma subgenus, the banyan tree has several siblings — all of them considered as strangler figs since they begin life as epiphytes.

The ficus pertusa (the central American Banyan) can be found all over: central and south America, Mexico, and Paraguay.

The ficus citrifolia (the shortleaf fig) commonly grows in: central and south America, south Florida, and around the Caribbean islands.

The ficus aurea (otherwise known as the Florida strangler fig) is grown in you guessed it, Florida, and also in the Caribbean islands.

The ficus macrophylla (the Moreton bay fig) is found all over central and south America.

What is the oldest banyan tree in the world?

The oldest banyan tree known to exist is actually of the bonsai variety, and it currently lives in Taiwan. It’s a baffling 240 years old! What a tiny little grandpa!

Where is the largest banyan tree in the world?

In a little town called Ramohalli in India, there is a tree called the Dodda Aalada Mara. This translates into “the big banyan tree” and it has that name for good reason. Not because it’s extremely tall, but because the root system of the big banyan spans over a 2.5-acre area!

But that’s not even the largest, though it is mentionable. In Calcutta, India, there is Banyan tree that is 24 metres tall, with over 2000 roots, and a canopy that spreads a wild 2.4 acres. Who even knew that was possible!

What is the spiritual significance of the banyan tree?

There are many cultures that find spiritual significance in the banyan tree, and it is referred to in many eastern religious canons.

In Hinduism, it is said that the large leaf on the banyan tree is the resting place of the god Krishna.

In Buddhism, the Pali canon makes references to the banyan tree on multiple occasions. One example specifically is using the roots on the banyan as an analogy in describing the human battle with sensual desire (kama).

In the Philippines, it is believed that the banyan tree is a host for both evil and peaceful spirits. They are careful not to point directly at banyan trees to avoid offending the spirits that dwell inside, and if they are ever near the tree, it is of utmost importance to speak in respectful ways. 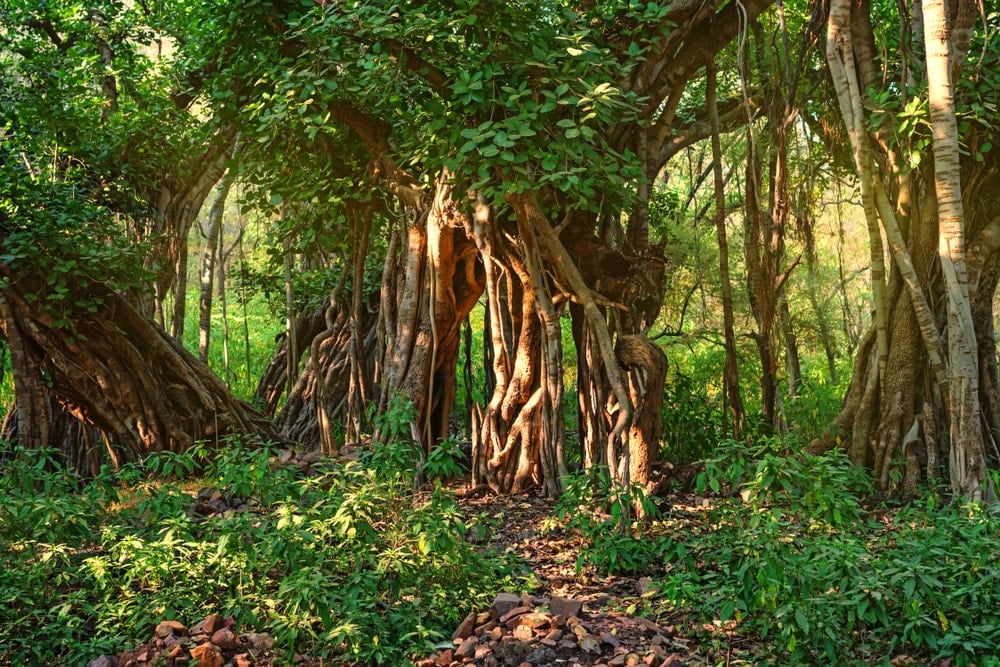 Can you cut down banyan trees?

Like all other trees, it is possible to cut down a banyan tree, either for propagation or entirely.

How tall are banyan trees?

The tallest banyan tree is 24 metres tall, but otherwise, they grow to an average of about 20 metres in their lifetime.

Can you eat banyan tree fruit?

While the fruit of the banyan tree is not toxic, it is not enjoyable and is not a good source of food. The figs are best left for the pests to nibble on.

The banyan tree produces flowers that are both male and female, and so the fig wasp will buzz around one banyan tree and it will be properly pollinated.

How can you tell the age of a banyan tree?

Due to the fact that older banyan trees are usually completely enveloped by its aerial roots that become indistinguishable from the trunk, it’s very difficult to tell the age of a banyan tree from its age rings.

Commonly, people will observe the distance that the banyan trees’ roots spread out to. For example, one of the oldest trees in banyan has roots that span out 2.5 acres. People estimate that per acre of root distance, you can attribute 100 years to its age.

Can you eat banyan tree leaves?

You wouldn’t be advised to nibble on the leaf of a banyan, but oils from the leaves are often extracted and used for medicinal teas. Additionally, due to the sturdiness and largeness of banyan leaves, they’re often used as plates!

How many years does a banyan tree live?

If the conditions are right, the banyan tree can live over 250 years old! The oldest one known in existence is from Calcutta and is 250.

If a banyan tree exists in ideal conditions, it can grow to be full-sized (20 metres tall) in a little under 5 years! That’s why it’s a rather popular choice for people looking to plant trees in the yard, but are feeling a little impatient.

Can you do bonsai for a banyan tree?

Banyan trees are actually a rather popular choice for the art of bonsai, and the oldest banyan tree we know if is 250, and it is a bonsai from Thailand.

Where can you buy a banyan tree?

They will all be of a very tiny variety of tree, but here are some links to places where you can buy a banyan:

What is the difference between a banyan and a ficus tree?

Ficus trees are the family in which banyan trees are apart of.

How far down do banyan roots grow?

Not very. Banyan trees are of the strange variety that grows aerial prop roots. This means that the roots grow aerially and laterally, and remain quite shallow in the soil.

In the day time, plants intake water, sunlight, and carbon dioxide and use photosynthesis to convert it to sugar, and turn the carbon dioxide into oxygen. Since sunlight is essential to this process, many plants only produce oxygen during the day.

However, there are some plants that are able to produce oxygen at night due to a process called Crassulacean Acid Metabolism (CAM). The main difference is that these night breathing plans open their stomata at night time, rather than the day time. This is a mechanism that desert-dwelling plants use to conserve precious energy.

Why is banyan tree the national tree of India?

In Hinduism, which originated in India, it is believed that the God, Krishna, rests on a leaf of the banyan tree. This spiritual Hindu significance is why it is the national tree of India.