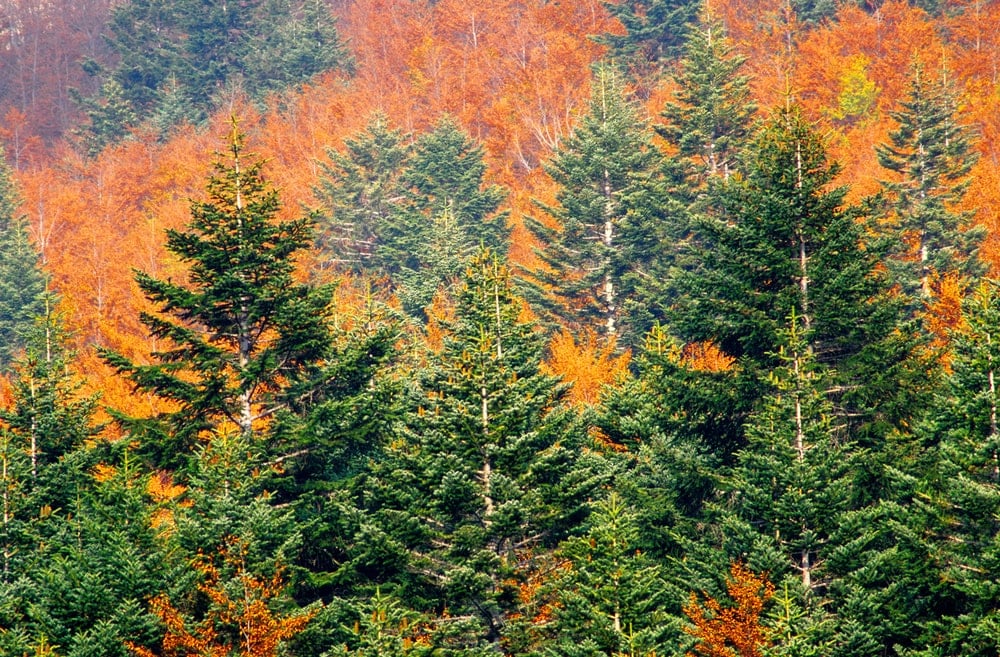 If you’re feeling curious about trees, you’ve come to the right place. Here we go into depth on abies balsamea, but we’ve also got some great articles about 101 Types of Trees if you’d like to deepen your learning!

Balsam fir trees are part of the pinaeceae family and the genus abies. The pinaeceae (pine) family is a large family of very well-known shrubs and trees that are usually of commercial importance. The pine family includes conifers such as; spruce trees, larch trees, cedar trees, pine trees, and hemlock trees.

Sometimes referred to as the Canada balsam, balsam firs are native to eastern and central Canada and the United States, and they can survive in some pretty horrendous conditions. They are one of the coldest hardy trees on the planet, and they can survive down to temperatures of -49 degrees Fahrenheit!

An experiment was done to see just how cold hardy the balsam fir is, and a tree was dipped in liquid nitrogen. Liquid nitrogen usually lingers at an unimaginably cold temperature of -320 degrees Fahrenheit, and there were absolutely no noticeable negative effects to the tree.

These spectacular tree species are known for their aromatic foliage, and as an attractive choice for Christmas trees, the resin that comes from the tree has many utility and medicinal purposes, and their foliage is a very important food source for many animal species. 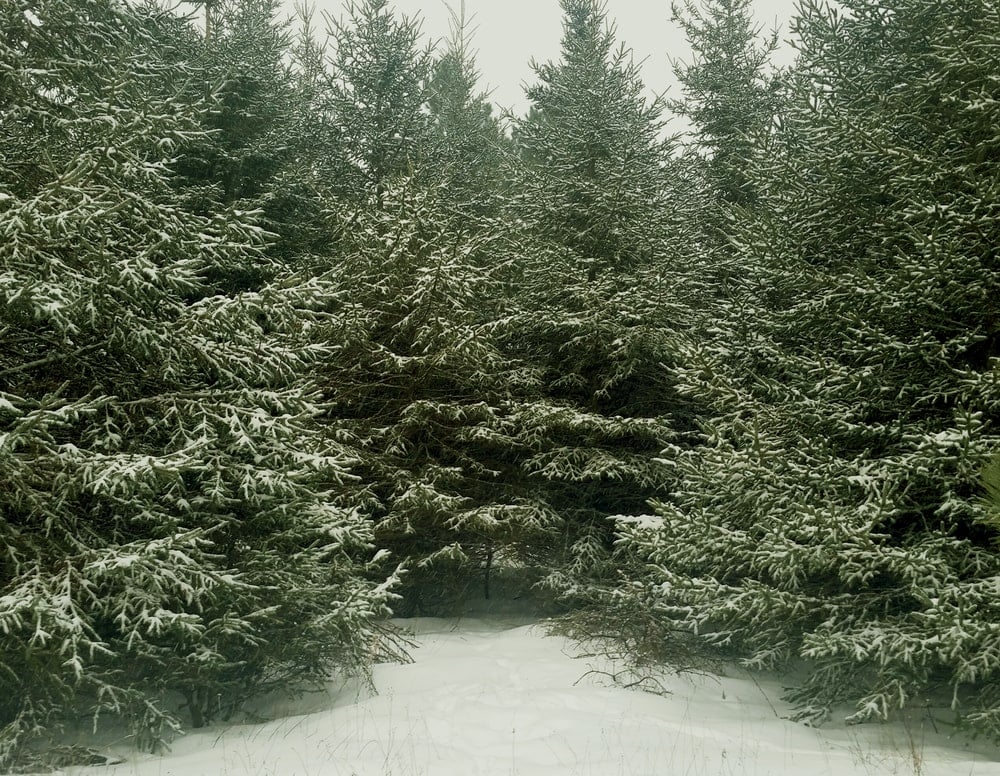 This evergreen tree has a very shallow root system, but they are wide-spreading. This is slightly unusual for a tree that is so water-loving, as water-loving trees will usually develop deeper taproots to ensure they always have a water supply.

These trees are medium-sized, usually sticking around heights of 14 to 20 meters. They will occasionally reach up to 27 meters, but this only occurs in exact right conditions. Balsam fir sizes will vary greatly depending on their growing location.

When the ground at high altitudes on mountaintops and ridges, they will be very slender and short. When they grow near swamps, they will grow very slowly, but tall and slender. And when they grow in dry swamps they will experience their fastest growth and their tallest heights.

Balsam fir trees are a “perfect tree” and have a narrow conic crown, that gradually grows into a robust base. Simply imagine the exact shape of a Christmas tree, just slightly less manicured.

The bark of a young tree is very smooth and medium gray, which is covered with resin blisters filled with a resin that spray when ruptured. The bark of older trees is much rougher and fissured, with ridges that exfoliate off in scales.

Balsam fir trees have coniferous needle-like leaves. They are very dark green and flat with stomata near the tip. They are usually between 0.5 inches to 1.5 inches long.

Balsam fir needles are arranged in a spiral along with the shoot, with a twisted needle base, which gives the needle clusters an appearance of being in horizontal rows on either side of the shoot. Needles are longer on the lower branches, and they become thicker and shorter on the upper branches.

How do Balsam Fir Trees Reproduce? 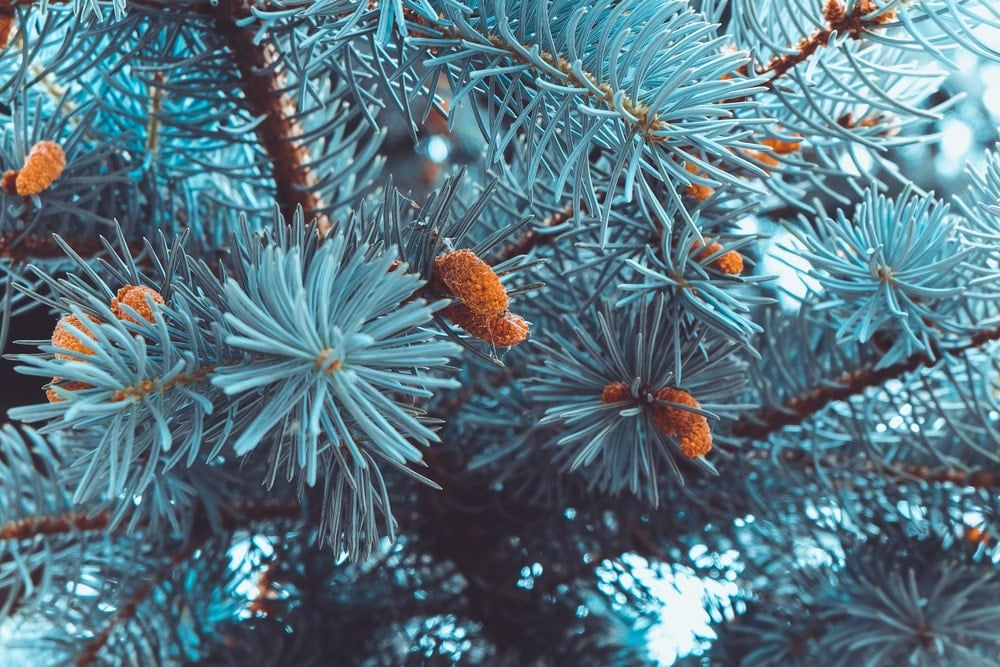 Balsam fir trees produce flowers in the form of seed cones. These seed cones stand erect on the stalk, are between 1 and 4 inches long, and they start their life out as a dark purple color which eventually ripens into brown. Instead of having scales that open up to release seeds, the cones actually disintegrate, and the seeds are released that way. This usually happens in late autumn.

What Are Some Other Types of Fir Trees?

The balsam fir comes in 2 true fir varieties, which are distinguished through a slight difference in their cones, and their growing regions.

This species of balsam fir has bracts that stick out farther than seed scales, which are short; making them closed cones. Their growing region extends into the central areas of North America. 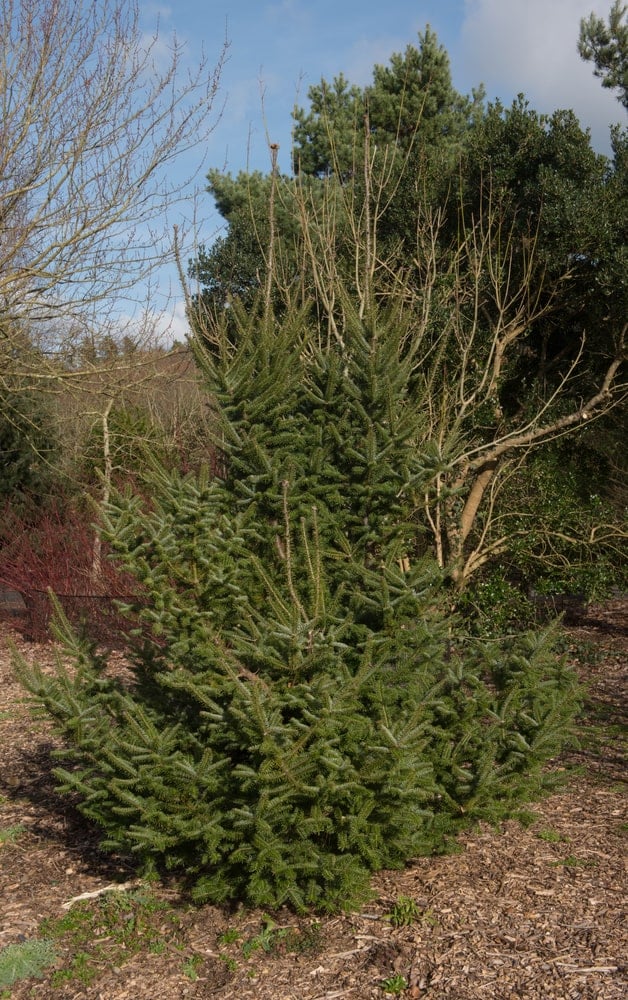 This species of Canaan fir has long visible bracts and a longer closed cone. Their growing region lingers more towards the eastern areas of North America.

Where do Balsam Fir Trees Grow? 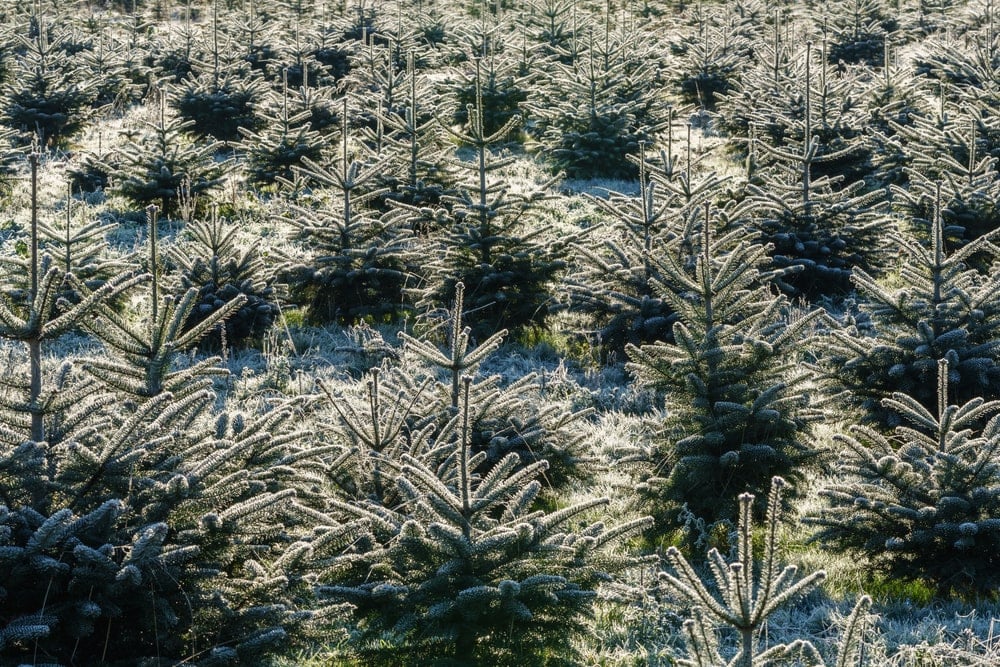 Balsam fire trees are native to many regions in eastern and central Canada and the United States. They can be found in cooler climates from Alberta to Newfoundland, and in Minnesota through to Maine, and south towards the Appalachian mountains and West Virginia.

What are the Growing Conditions of the Balsam Fir Tree? 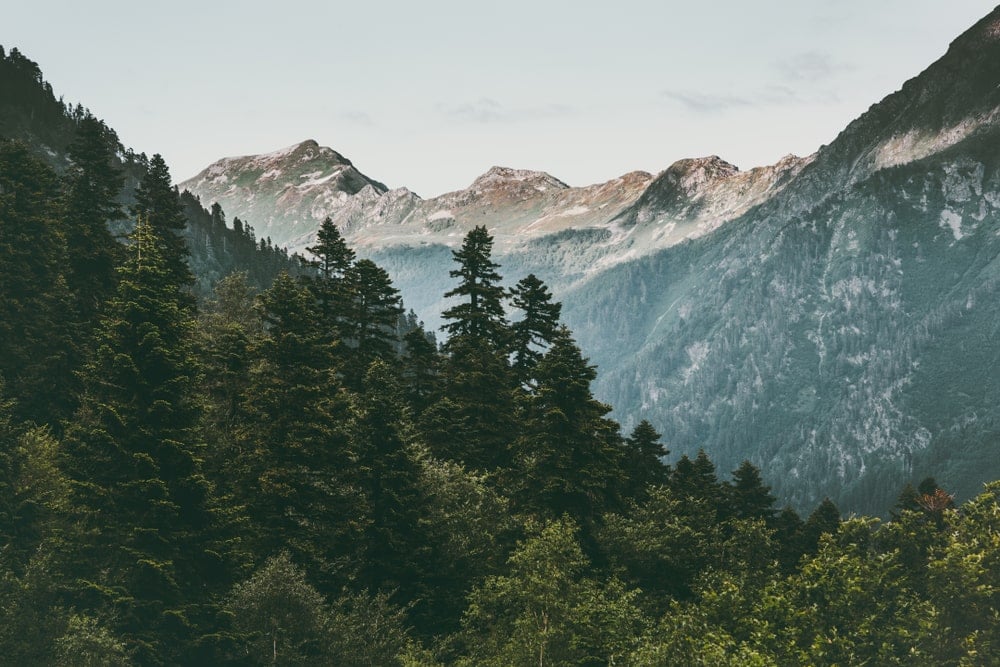 The balsam fir is a conifer that can thrive in many different types of environments. They prefer to exist in regions with very cool climates where the mean annual temperature is 40 degrees Fahrenheit. They also prefer to have consistent moisture at their roots, and full sun exposure. Balsam fir trees can grow in 4 different forest types:

How are Balsam Fir Trees Used?

Balsam fir heartwood is a very light red-brown color and darkens with age. The sapwood isn’t distinguishable from the heartwood. The wood is coarsely textured and straight-grained, though isn’t particularly resistant to rot or water damage.

Balsam fir wood isn’t of great quality, but it is used mostly for pulpwood and framing lumber.

Balsam fir trees are grown in large plantations in northeastern North America for the commercial distribution of Christmas trees. They are a popular Christmas tree for their pleasant aroma, conical shape, and green needles. Their needles also stay on much longer than other pine varieties and have excellent needle retention. 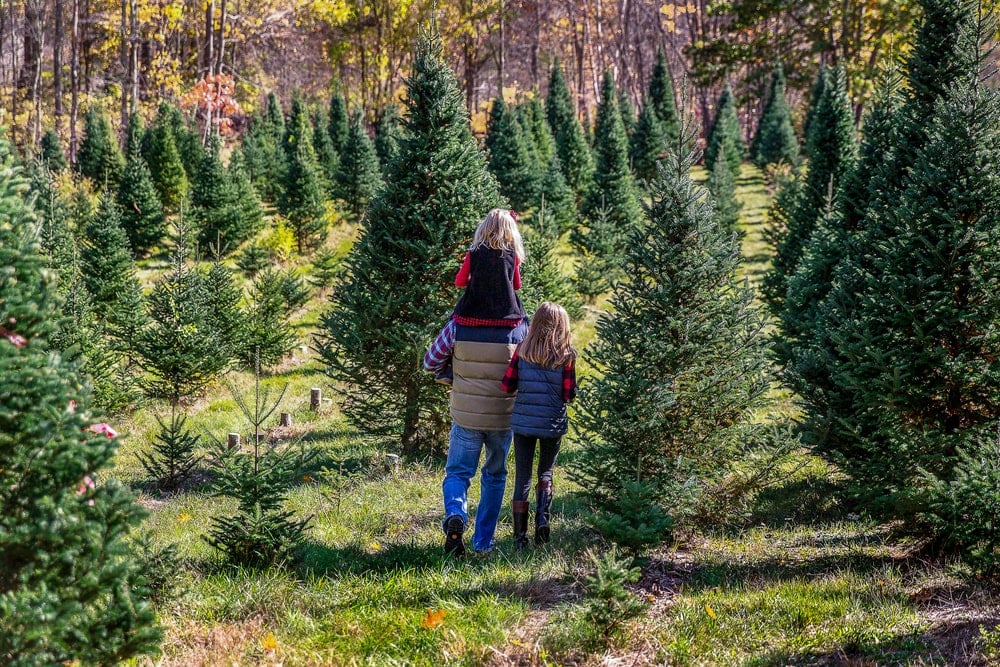 Christmas tree farms are traditional family farms, and the same names have distributed balsam firs for many generations.

*Balsam fir needles were also as mattress filling before spring mattresses were invented! Their pleasant smell, resistance to rotting, and soft texture made them very useful for camping mats and mats for hunting cabins.

Balsam fir oil is an EPA-approved cosmetic and natural medicinal remedy. Resin has been traditionally used to help with the effects of scurvy, and it can also be used as a nontoxic rodent repellent, air freshener, and incense.

The foliage of the balsam fir is eaten by moose and deer and is a very important source of food in the winter months. Seeds are eaten by many small mammals and birds, like pine mice, ruffed grouse, red squirrels, chickadees, crossbills, and snowshoe hares. The needles are also eaten by lepidopteran species (moths and butterflies).

Balsam fir foliage is a plant that is unpalatable to deer and therefore will not graze on it any time of the year. This makes the balsam fir a very smart choice for landscapers who live in areas that have a high deer population.

Balsam fir trees have a very potent smell. They are often sold commercially as Christmas trees due to their very pleasant pine needle aroma, which is similar to regular pine Christmas trees. Though balsam firs hold their leaves for far longer.

How do you identify a balsam fir tree?

The easiest way to identify a balsam fir tree is by its conical shape. They have a robust and wide bottom that gradually slims into a sharp point. Needle like leaves are short and blue-green, and they are slightly flexible.

Balsam firs are also easily recognizable from their attractive scent. They can be smelled from several yards away.

When should you prune a balsam fir tree?

Tree pruning is entirely dependant on the aesthetic preferences of the land owner. A tree does not need the help of a human in order to grow properly. If one is intent on pruning a balsam fir, they should avoid doing so in the fall or winter, as the cut will consistently seep sap.

Otherwise, it is best to reserve pruning for branches that appear sickly, or if they are growing in an awkward direction that is interfering with the growth of other branches.

Balsam fir trees grow at different speeds depending on where they are growing, but that speed never usually exceeds over 12 inches in a year.

When the ground at high altitudes on mountaintops and ridges, they will be very slender and short. When they grow near swamps, they will grow very slowly, but tall and slender. And when they grow in dry swamps they will experience their fastest growth and their tallest heights.

The average life expectancy of a balsam fir tree is 80 years, though there have been occurrences of trees living to be over 150 years old as long as they are growing in ideal conditions.

How tall do balsam fir trees get?

Balsam fir trees vary greatly in size, depending on where they are going. When the ground at high altitudes on mountaintops and ridges, they will be very slender and short. When they grow near swamps, they will grow very slowly, but tall and slender. And when they grow in dry swamps they will experience their fastest growth and their tallest heights.

They are medium-sized trees, and will usually grow to heights between 14 and 20 meters, though there have been some occurrences of them growing to reach 27 meters tall in dry swamp areas.

Do balsam fir trees have needles?

Balsam firs are coniferous evergreens, meaning that they have needles and cones instead of leaves and flowers, and they do not drop seasonally like the foliage of deciduous trees do.

What is the scientific name for a balsam fir tree?

The scientific term for the balsam fir tree is abies balsamea.

What is the difference between a balsam fir and a pine tree?

What is the difference between a balsam fir and fraser fir?

When choosing Christmas trees, folks often are conflicted about choosing a balsam fir or a fraser fir. Balsam fir needles are less than an inch long, dark green with a rounded tip, and they last far longer on the tree. The branches are most closely gathered and are slender.

Fraser fir needles are over an inch long, they are silvery green and soft to the touch. There is plenty of space between the branches and they are much thicker, making it easier to hang heavy ornaments.

Balsam fir trees are grown in large plantations in northeastern North America for the commercial distribution of Christmas trees. They are a popular choice for their pleasant aroma, conical shape, and green needles. Their needles also stay on much longer than other pine varieties and have excellent needle retention.

Christmas tree farms are traditional family farms, and the same names have distributed balsam firs for many generations.

Can balsam fir grow in shade?

Balsam firs are sun-loving trees, and will not grow successfully if they are growing under a forest canopy. They will more commonly grow in uncovered swamps, dry swamps, and mountaintops.

What is better, a balsam fir or an artificial Christmas tree?

Balsam firs are an excellent choice of Christmas tree if one is looking for a natural look and that classic Christmas tree scent. They have excellent needle retention and will hold onto their leaves much longer than a pine tree will.

Artificial trees are also a good choice if one is sensitive to smells and doesn’t want to deal with needle drop as the tree decays.