Here’s what you need to know to prep for the day when you suddenly discover that cane toads have descended on your yard or when you simply live in an area prone to these big blobby bufos' invasions. 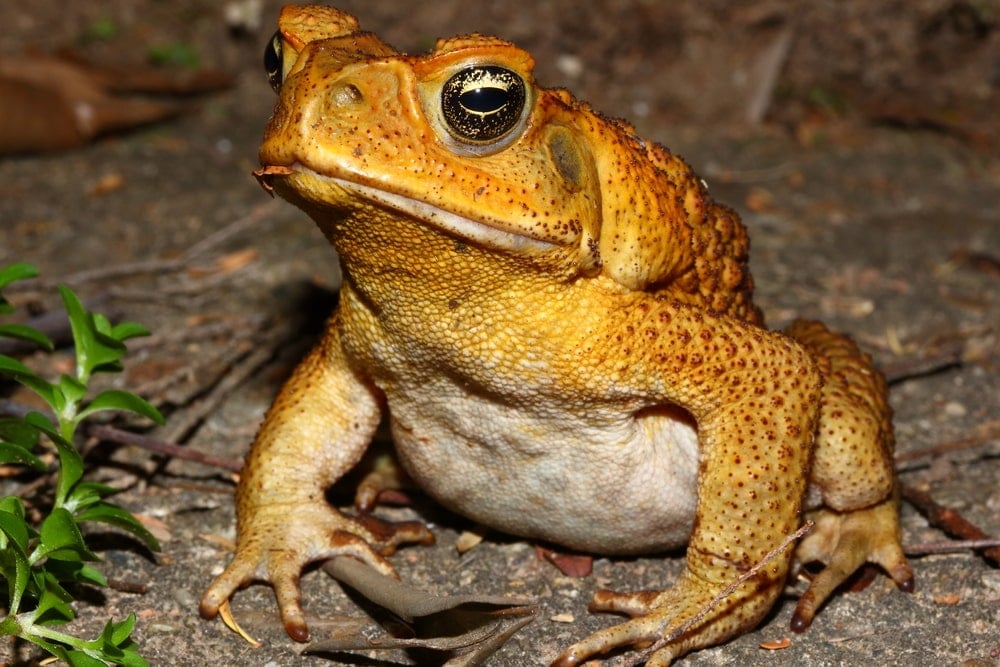 Welp, the world seems to be getting all of these things in Biblical proportions lately: a massive plague, giant hornets, locusts, and now CANE TOADS!

As Home Stratosphere’s resident crazy toad lady, that last one is the kind of thing that would make me jump for joy. We’ve been through so much, that a rain of toads would be a delight! After all, toads overall are a blessing to have in your backyard. They help keep worms, bugs, slugs, and other pests out of your garden, and are just super cute and soothing. Toads also have a homing instinct, so now that summer’s here? Chances are that’s the same toad that appears on your porch every night.

But not every toad is a wanted visitor.

Cane toads, also called marine toads or bufo toads, are an invasive species that are most notorious in Australia but have also showed up in US states like Florida and Hawaii, and have rapidly spread throughout the south since they breed faster than K-pop stans can crash police surveillance servers. They’re gigantic and eat almost anything, with very few natural predators who’d eat them! And when summers get really rainy in Florida, the cane toads come out en masse.

While toad people like me would be absolutely freaking ecstatic to see these big blobby bufos suddenly descending upon their yards? That’s far less the case for dog people, who may unfortunately lose their furry friends to cane toads’ highly potent bufotoxin if they’re not careful. If you’re in an area prone to cane toad invasions, here’s what you need to know!

See also  Disa Orchid Guide: What is it? How to grow it?

How Cane Toads Got Introduced to Australia and the US 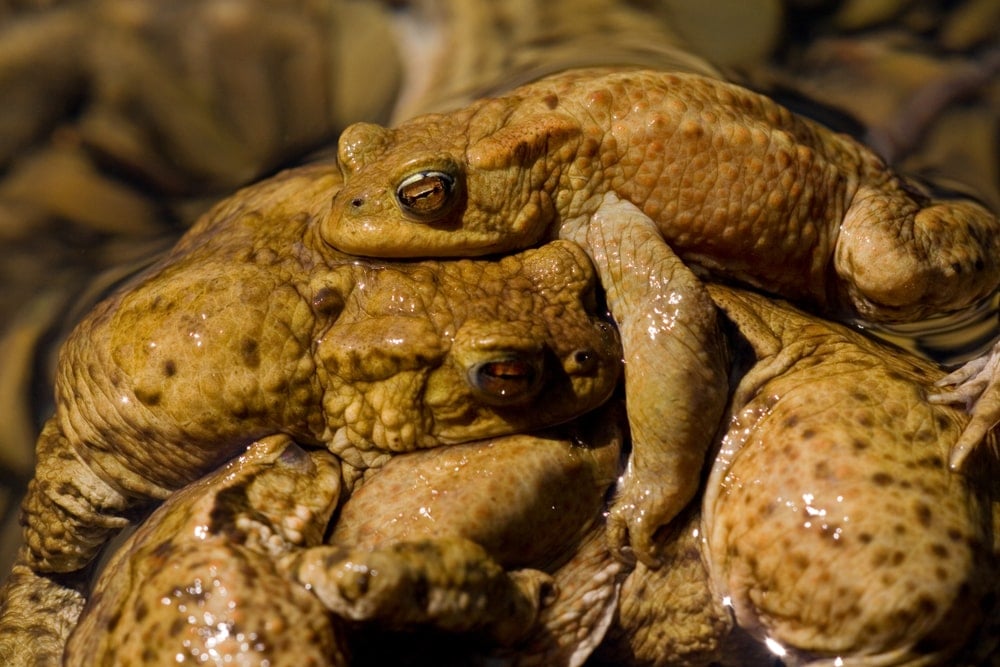 First, it’s a good idea to find out how cane toads exploded in population the way that they did, so the same mistakes won’t be repeated. But humans are pretty dumb and like to play God, so I’m not holding out much hope there.

Cane toads aren’t the only invasive species to have gone out of control someplace, but they’re probably the best-known example of this. The introduction of cane toads was institutionally approved to combat agricultural issues, opposed to the foolhardy actions of an exotic pet owner or two.

Cane toads were first introduced in Florida in 1936, a year after the now-infamous and much-regretted decision to do so in Australia. Interestingly, before the best-known Australian introduction, cane toads were also introduced to Hawaii in 1932. Now there’s a random toad fact you probably never would’ve expected to learn, along with the fact that while cane toads actually ARE native to a small patch of Texas along the Mexican border (think Laredo to Brownsville) but nowhere else in the continental US.

Oh, and those cane toads were brought to Australia from Puerto Rico. THEY’RE NOT NATIVE TO PUERTO RICO. 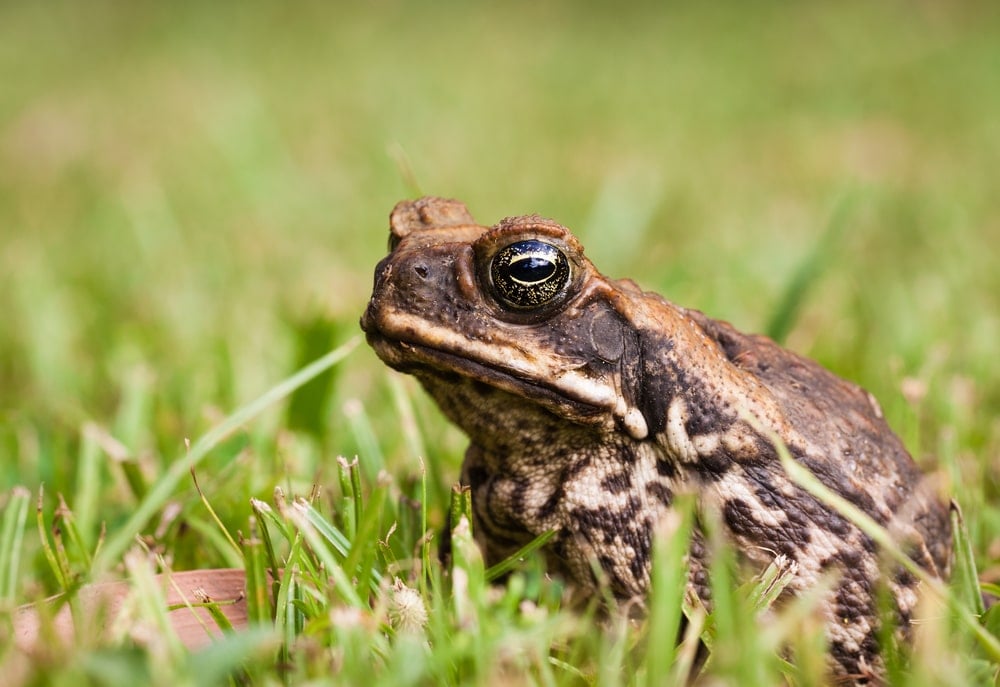 I love the cane toads, but I don’t think Boricua feels the same given that they eat many endangered local amphibian species…

Anyway, the chief purpose of bringing cane toads to places they don’t belong was because capitalist slavedrivers were mad that cane beetles were destroying their sugar crops.

This hilariously backfired on them because cane toads are not very good climbers, and the beetles climbed too high up the stalks to have the toads bother catching them. So instead, they just ate everything else in their path and the beetles decimated the sugar cane while the cane toads quickly bred and spread like wildfire. If you want to blame someone for the cane toad invasion, blame the sugar plantation owners who upheld this hegemonic bullshit and caused their populations to reach the billions in Australia and hundreds of millions in the US.

When a non-native species gets introduced like this, it can not only be deleterious to local wildlife but also just cause a massive overpopulation if there’s no natural predators nearby (or at all). In Florida especially, the environment is extremely amenable to cane toads which is why they keep breeding and rainy seasons only exacerbate it.

Can Cane Toads Humanely Be Dealt With? 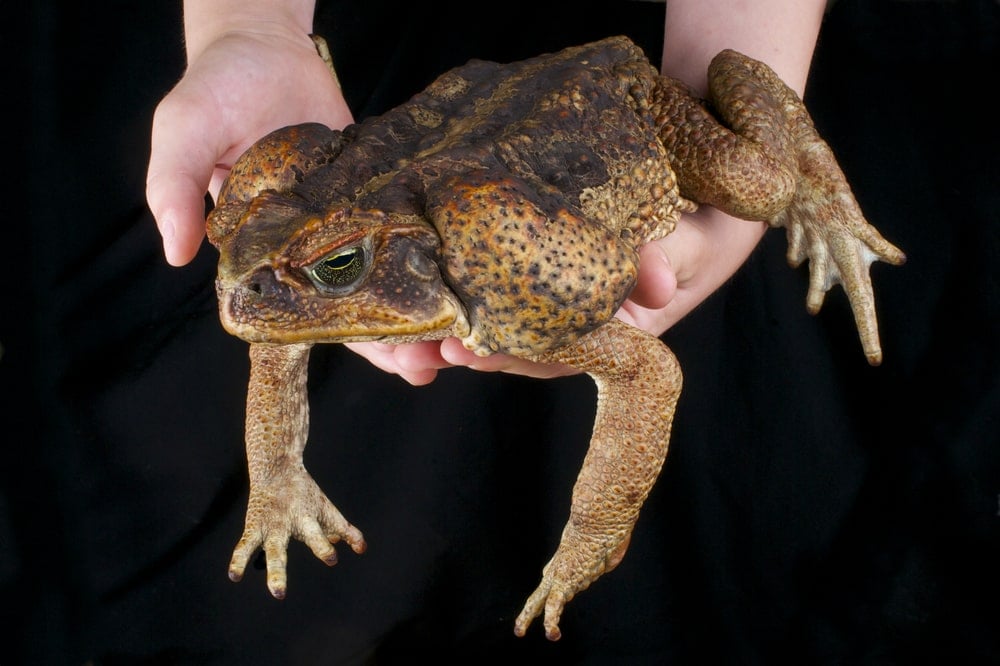 Cane toads can lay thousands of eggs at a time and thrive in almost any environment, though they prefer moist places like pools. Any other standing water is also an invitation for your home to turn into a Cane Toad Playboy Mansion, although you might not find it as fun as that scene from Once Upon a Time in Hollywood.

Because cane toads also eat almost anything— dog food, trash, other animals, and those horrifying gelatin abominations from the 1950s–it can be hard to keep them out of your yard if they happen to like it there.

So, should you kill these toads if they show up on your property? I say no, because I’m a toad lady and can’t bear the thought of it. But hear me out! The next section explains why.

A couple scientists outlined the most humane ways to kill cane toads if you must: freezing them or a swift blow with a blunt instrument like a hammer, although you need to be careful because you could come into contact with bufotoxin this way. And I just started uncontrollably sobbing as I wrote that sentence, as I could never do that to a toad and would HARSHLY judge anyone who did the same. So there’s a couple other options you have.

If you’re thinking about getting an exotic pet, why not pluck a cane toad out of an area where it doesn’t belong? It’s the only ethical form of wild-catching a toad!

If you don’t want a toad as a pet, a safe way to mitigate cane toads is to install screen around your fences, and dig at least six inches down. While cane toads are big, they are pretty flexible. Toads also love to burrow and can get under a fence, but they’re not likely to dig more than six inches below.

In addition to minimizing standing water near your home, you’ll also want to avoid bright lights. Toads are not very fond of light, but bright lights can attract cane toads who love to sit in front of those bug buffets all night.

If you don’t have a very large yard, sonar stakes are a no-kill option to consider that can also keep out snakes and other unwanted visitors. Sonar stakes emit a vibration that some animals don’t like and could make them leave. Their efficacy though depends on your yard size, how many cane toads we’re talking, and if they’re desensitized to human contact.

I get that not everyone wants to invite all those big blobby toads in for roaches and cuddles. But you don’t need to brutally harm these otherwise gentle creatures, even if human idiocy brought them here.

How Do I Tell Cane Toads Apart from Native Wildlife? 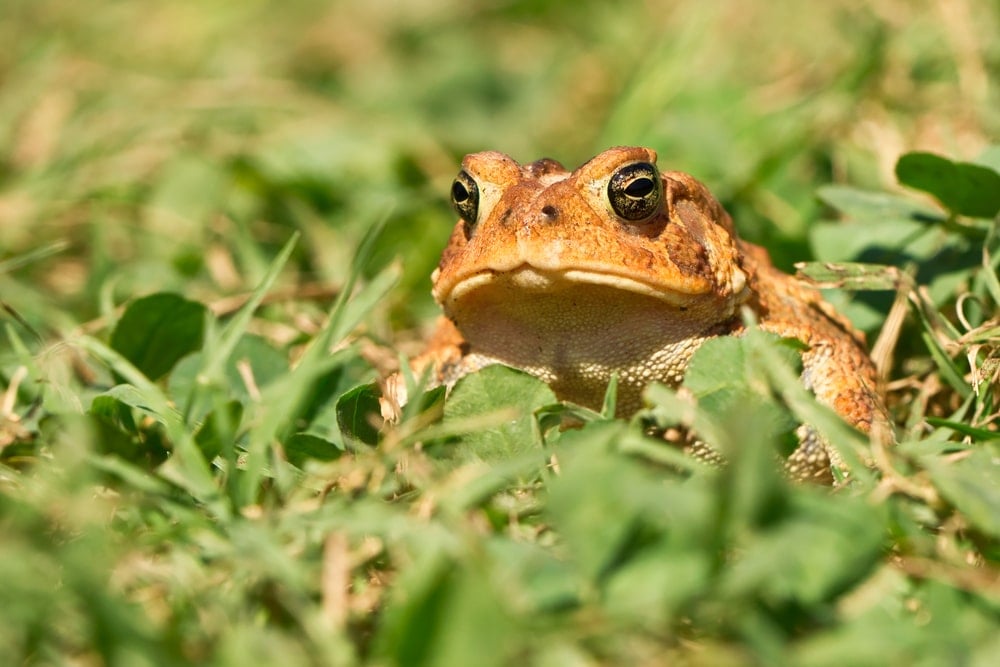 There’s another huge reason you shouldn’t kill toads that show up: you may not even know it’s a cane toad. Most people can’t even tell the difference between a frog and a toad, so you could be inadvertently killing a native frog or toad species on the decline. If you do this, you deserve to step on Legos for all eternity.

Amphibian populations worldwide have been on the decline due to overdevelopment and deforestation among other factors, one of them being chytrid fungus. It’s a deathly fungal infection that has left amphibians vulnerable and has been sped up by climate change. Going open season on toads exacerbates this because people end up killing American toads, Southern toads, frogs, and even lizard species instead of the invasive cane toads.

The Southern Toad pictured above is much smaller than a cane toad. Younger cane toads can be hard to tell apart from other toad species, so avoid them if this is the case. Adult cane toads are fucking ENORMOUS. They’re the Andre the Giant of amphibians. They can range from about 6-7” long to the size of small puppies. Definitely much larger than your average American Toad or Southern Toad which is not likely to go beyond 4” long snout to vent as a fully grown adult.

Cane toads have really smart and somewhat monochromatic warts, unlike the more variegated toad species endemic to North America. But their main characteristic that sets them apart are the large and pronounced parotid glands behind their eyes. Most toads have them, but on adult cane toads they’re practically like camel humps.

If you’re unsure if an amphibian you come across is endemic (native) to your area, check out the iNaturalist app and upload it. You can also contact your local wildlife department and ask if it’s a native species. It could indicate an invasion, an escaped exotic pet, or a shitty exotic pet owner who let them go. (I beg you, DO NOT do this if you can’t care for an exotic pet anymore! Petfinder exists! Frog Forums exists!)

What Should I Do if My Pet Comes Into Contact with a Cane Toad? 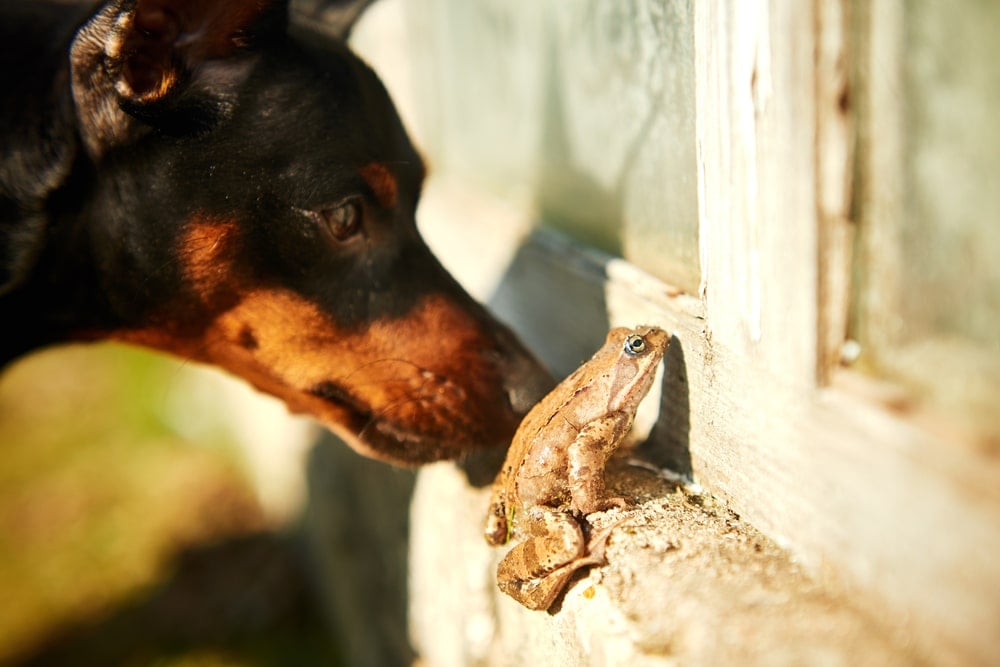 Obviously, you should do your best to keep your pets away from cane toads if they go outdoors. The above mitigation methods should help. But if your area is totally overrun with cane toads, Fluffy coming into contact with one unfortunately might be inevitable.

If your pet is having seizures or convulsions, you should get them to an emergency vet ASAP. But if that’s not possible, you should rinse your dog’s face and mouth with water immediately after extricating the cane toad.

Use a hose or sink extension to flush their faces and front of the mouth– not down their throat!– and keep their head tilted down to avoid choking hazards. Even if you can’t get to an emergency vet right away or don’t have a pet ER nearby, contact one if you can.

Since dogs aren’t my wheelhouse like toads are, check out this info from the Australian Department of Parks and Wildlife since they’re the experts on cane toads coming into contact with pets.

You can deal with cane toads humanely if they take over. But honestly, let’s embrace the rain of toads. We already got a plague, locusts, and hornets. Bring on the toads!