Eggplants are a great vegan replacements for delicious meat dishes. This is the recipe on how to make mouthwatering eggplant parmesan using all plant-based ingredients. 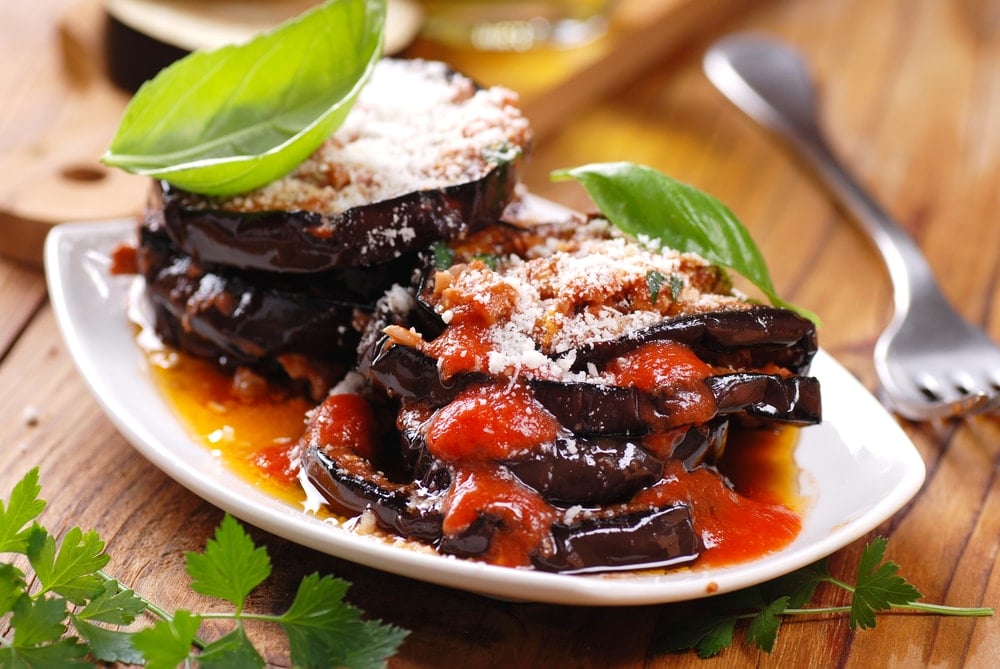 This is one of those dishes that might seem to require way too much prep and cook times to justify the 10 minutes it takes to devour it all. But trust me—it’ll rank up there as the best 10 minutes you can remember from your kitchen table.

There was a time when I didn’t think eggplant parmesan could be made with anything other than the traditional ingredients of dairy-based cheese and egg batter. When I switched to a vegan diet a while ago, I thought it meant saying goodbye to a lot of my favorite dishes. Luckily, I’ve learned that it’s really not that hard to veganize just about anything, including eggplant parm. 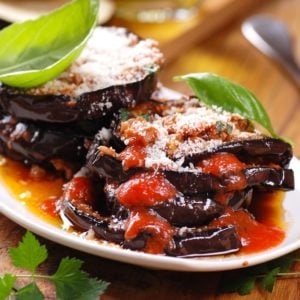 Alice Mesa
One of my all-time favorite dishes is eggplant parmesan. I’m not sure which part I like best—the combination of crispy fried batter with soft and creamy eggplant inside, the savory tanginess of the tomato sauce, or the heavenly garlicky aroma teasing your smell buds as you wait out the 15-minute bake at the end.
Print Recipe Pin Recipe Add to Collection Go to Collections
Prep Time 1 hr
Cook Time 20 mins
Baking Time 15 mins
Total Time 1 hr 35 mins
Cuisine Italian
Servings 4 Servings

This recipe for Vegan Eggplant Parmesan shows you how. The sauce, consisting of a can of diced tomatoes, garlic, olive oil, and some herbs, is naturally vegan already. Instead of dairy-based mozzarella and parmesan, I use plant-based versions. These vegan products can be found in most grocery stores and are becoming more widely available by the day. My favorite brand of vegan parmesan so far is Violife. For mozzarella, I like to use Daiya. The “egg” batter is a little more complicated, but nothing unmanageable. Vegan baking often uses what’s known as a flax seed “egg,” which is basically ground flaxseed meal mixed with hot water. It’s a wonderful substitute for true eggs. So for this vegan “egg” batter, I mixed up the equivalent of two flax seed “eggs” and added some non-dairy milk to thin it out a little. It made for a beautiful crispy batter. My omnivore husband didn’t notice any difference in taste or texture between this vegan batter and the egg-based batter of old. In the past, I’ve been known to cave to moments of laziness and skip the fresh basil mentioned in the last step of the recipe. Less to wash, less to prep. But shame on me, because the basil is a magical addition. There’s something about its fresh, aromatic flavor that really complements the savory garlicky tomato sauce and the saltiness of the cheese. It’s also nice to have something green and fresh to go with a dish in which the main component is fried. And the dainty dark green ribbons of fresh basil sprinkled on top of fried eggplant, with deep red marinara underneath it all creates a stunning visual effect. If you’re at the grocery store shopping for all the ingredients and you find yourself on the fence between picking up the fresh basil and walking past it, I highly recommend it.
Keyword Main Course, Recipe, Vegan Eggplant Parmesan