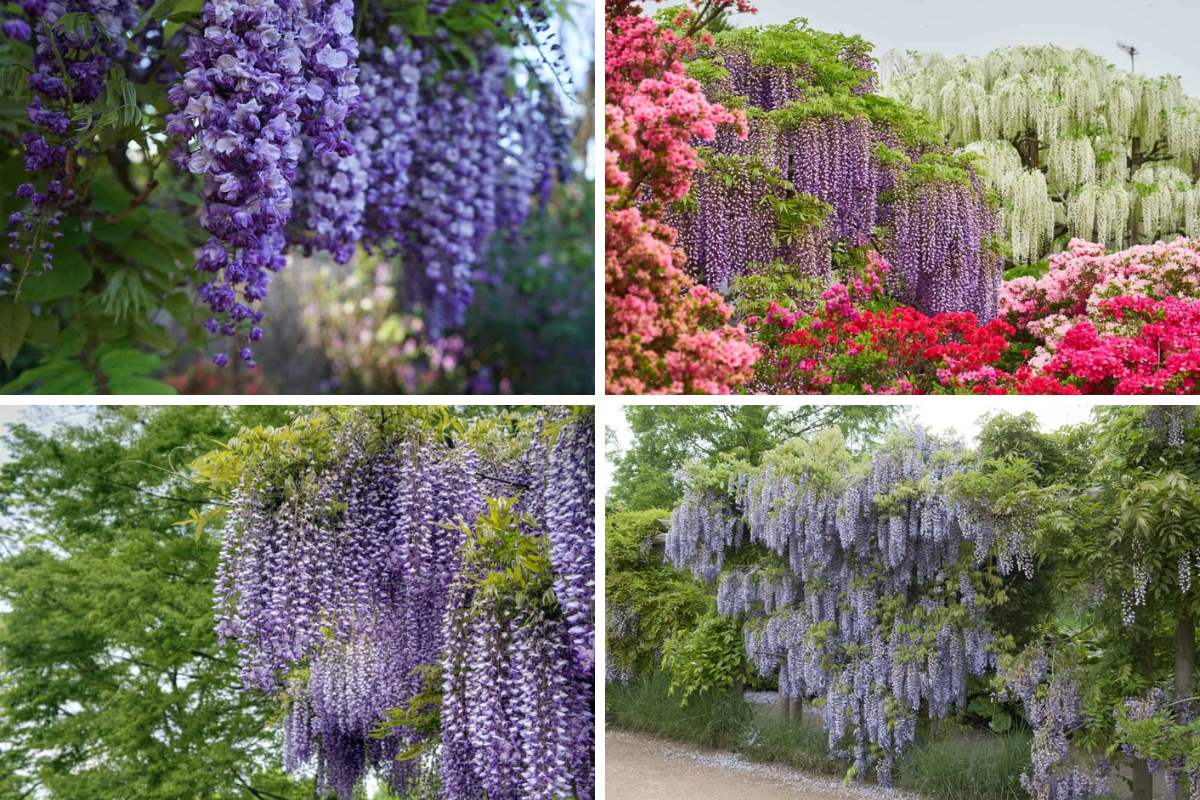 The term wisteria may be better known as Wisteria Lane, which was the fictional street in the popular show “Desperate Housewives” (which I loved). It’s also a flower.

Wisteria is best defined as a breathtaking but aggressive vine that is likely to steal the beauty show in anyone’s garden. It might be a cold-hardy kind of vine, but if looked after properly and given the right growing conditions, this vine will bloom into mesmerizing cascades of luscious purple-violet flowers that will take your breath away. 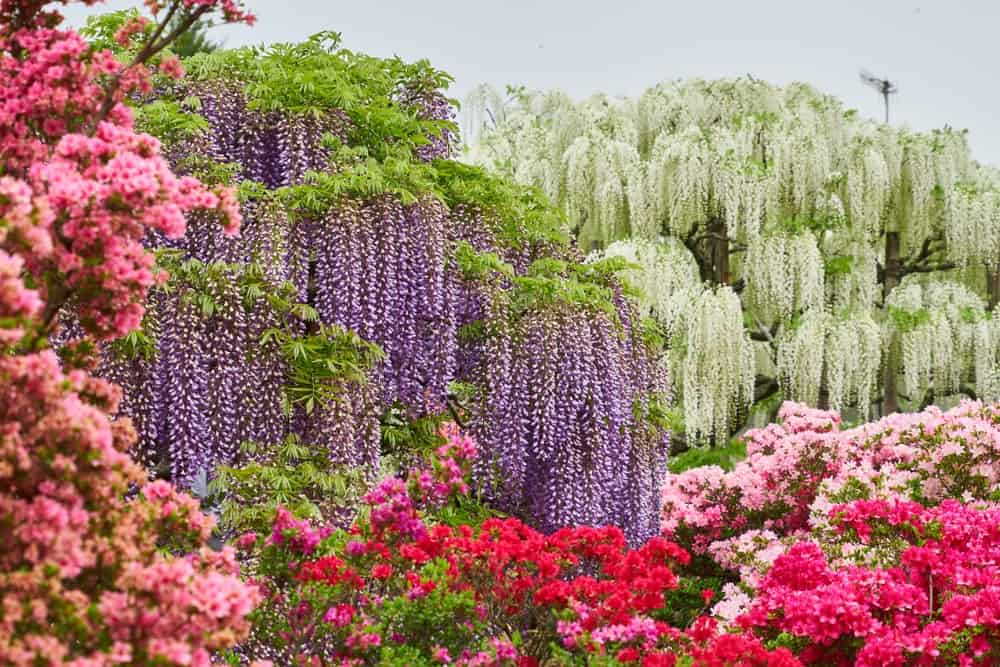 This popular and beautiful vine belongs to the flowering plants of the legume family called Fabaceae (Leguminosae). This includes further ten species of climbing and woody vines, all of which are native to Japan, Korea, and China. Lately, some other varieties of the wisteria vine have been introduced to the Eastern United States.

Wisteria is commonly described as a vigorous climbing shrub that has been blessed with an abundance of rich and plush foliage, coupled with magnificent, blooming flowers that burst wide open usually during the colorful spring season.

This vine, along with its luxurious flowers was initially found in Asia. After a few centuries, they were introduced to the Americas and Europe sometime during the 1800s. The wisteria vine got its unique name in the early 19th century a botanist called Thomas Nuttall decided to name it after Dr. Caspar Wistar, who was a famous physician during those times.

Interestingly, wisteria stemmed from Asia and then became popular in Europe, its largest variety can be found in the United States, particularly in Sierra Madre, California. What’s even more fascinating is that a “Wisteria Festival” is held there every year to honor this luxuriously spectacular vine.

Some common characteristics and features of the wisteria plant include:

Below are some of the popular and common varieties of wisteria that most gardeners wish to grow. 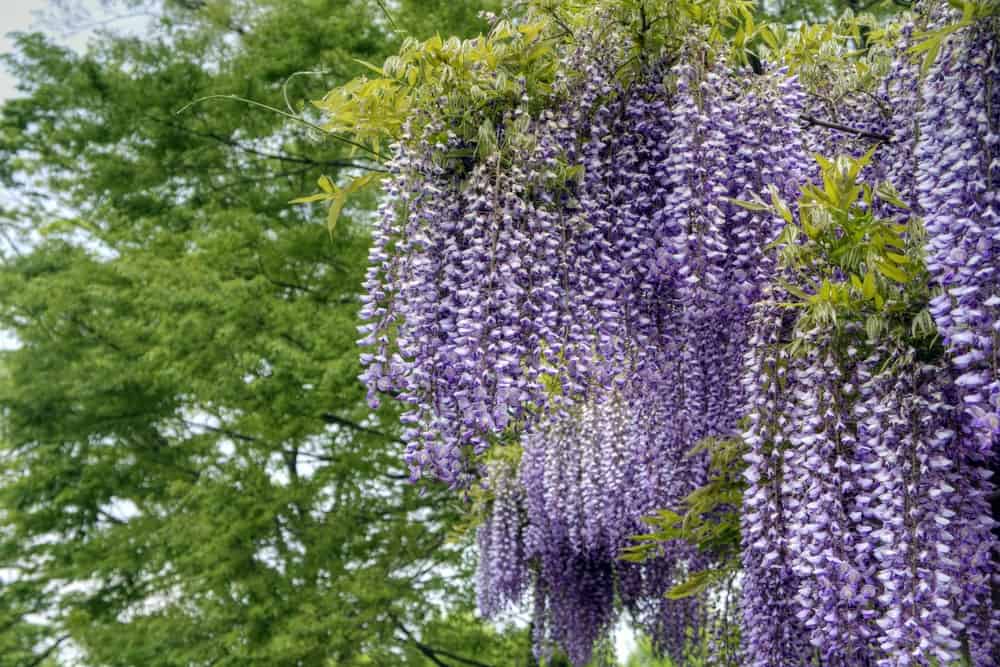 The Japanese Wisteria is often referred to as the “vigorous climber” that reaches to a height of 10 to 30 feet on average but can grow even higher than that. The flowering period for this type of wisteria is mid-spring to early summer during which this splendid species sports some of the most beautiful fall colors.

It produces oval, elliptical shaped leaves with 13-19 leaflets that are usually bronze or pale green in color when young and gradually turn into a gorgeous yellow during the fall season.

The Japanese Wisteria has scented violet flowers that grow in the form of 1 to 3 foot long chain-like clusters which are called racemes. These pendulous racemes typically grow up to 12 inches long; however, several of its cultivars have dramatic racemes that go even beyond 4 feet (120cm)! These cultivars also appear in a variety of different shades and colors including blue, lavender, deep purple and white.

This flower is a very reliable and excellent for gardeners that reside in cold climates. They bloom best in full sun, and they are also heavily scented which makes them an ideal choice for you to keep in your home.

Some of the most common and other popular varieties of the Japanese wisteria include: 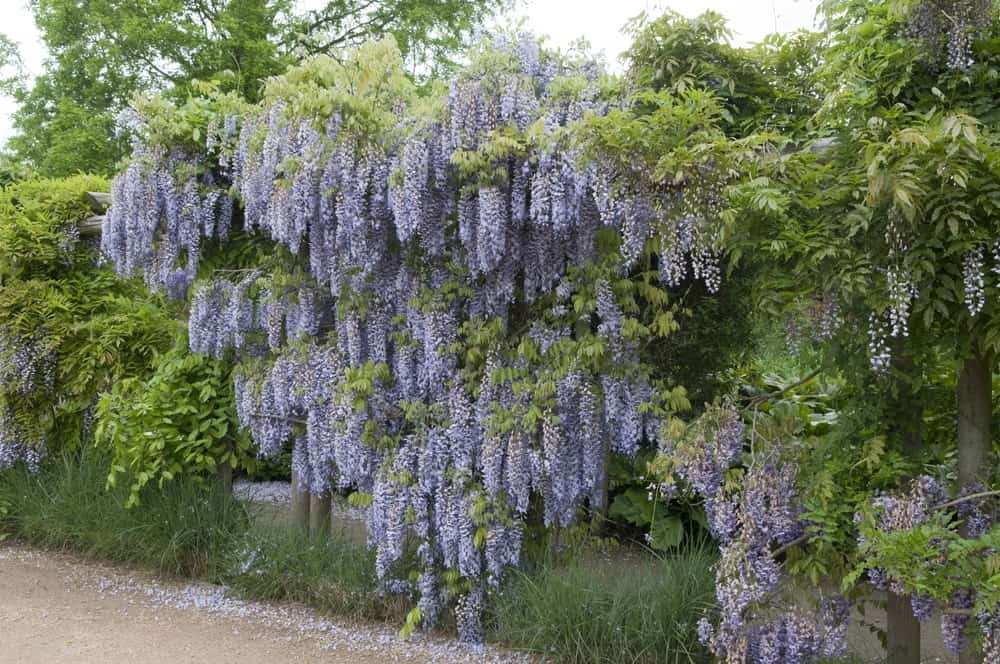 This is an award-winning type of Japanese wisteria that is duly noted for its beautiful floral display and its wonderful fragrance. It consists of masses of really long hanging clusters that typically go up to 40 inches in length. The flowers of this variety are a stunning shade of lilac with dark violet markings shaped like a pea.

This plant grows really well under the full or partial sun and its flowering period goes on from late spring to early or mid-summer. It has leaves that sport a dark green color and contain 15 lance-shaped leaflets. The leaves turn a striking shade of yellow in the fall season which easily enhances the beauty of any garden. 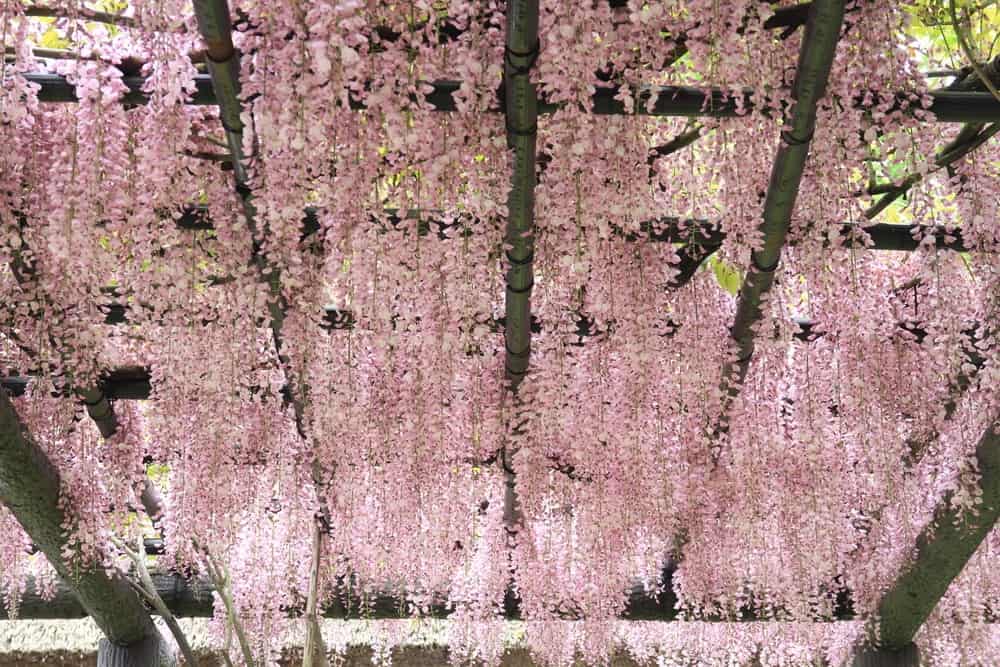 This variety of wisteria is known for its amazing scent and its beautiful showiness. Its flowering period begins in the late spring and end during the mid-summer season. The plant grows to an average height of 10 to 25 inches and produces very long drooping clusters or racemes.

The flowers of this wisteria are a gorgeous pale rose that are further tipped with the color purple. This wisteria is believed to be the most romantic of all the species in the wisteria family and is truly a show-stopper 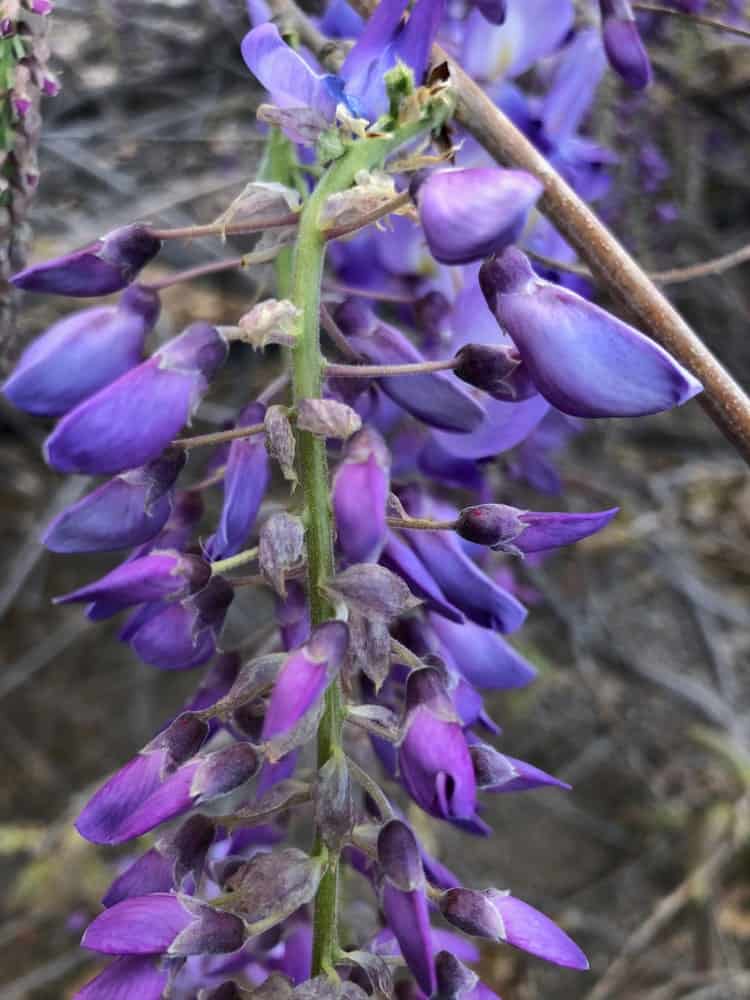 This is one of the darkest purple wisteria cultivars that is famous for its spectacular tresses of sweet-scented violet flowers. These stunning flowers bloom during late spring all the way through mid-summer and grow up to 50 cm in length. The bean-like pods of this vine ripen in late summer and may even keep ripening till the early winter season.

This wisteria variety consists of green, pinnate leaves that contain 11-19 lance-shaped leaflets which sport a pretty golden hue during the fall season. 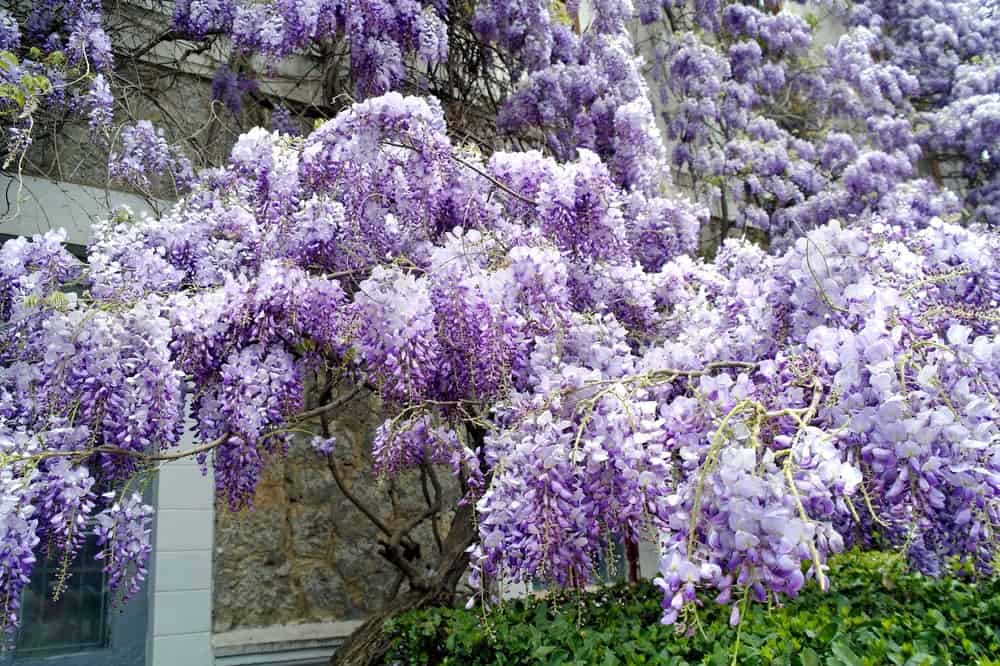 The Chinese wisteria is also a vigorous climber that originated from China. It produces beautiful violet-blue flowers that grow clusters called racemes. These clusters are typically 9-12 inches long and are not as long or old hardy as those from the Japanese wisteria.

The flowering period for this plant ranges from early spring to early summer, and the flowers normally bloom over a period of weeks. The Chinese wisteria grows to an average height of 10 to 25 feet, sometimes even higher than that. The leaves of this plant contain 91-13 oval shaped leaflets that are initially a stunning shade of copper or bronze.

When the racemes of this plant are about 30 cm or 12 inches long, the clusters burst into a spectacular and fragrant flower curtain that greatly attracts the little buzzing bees in early summer or late spring. Often times, this plant also produces absolutely stunning reddish-violet flowers that look breathtaking.

Interestingly, all the flowers of the Chinese wisteria bloom and burst together all at once during May, well before the foliage appears. Unlike its Japanese cousin, this plant grows well in partial shade and often under full sun, too. Their flowers also last longer than most other wisterias.

Some of the most common and other popular varieties of the Chinese wisteria include: 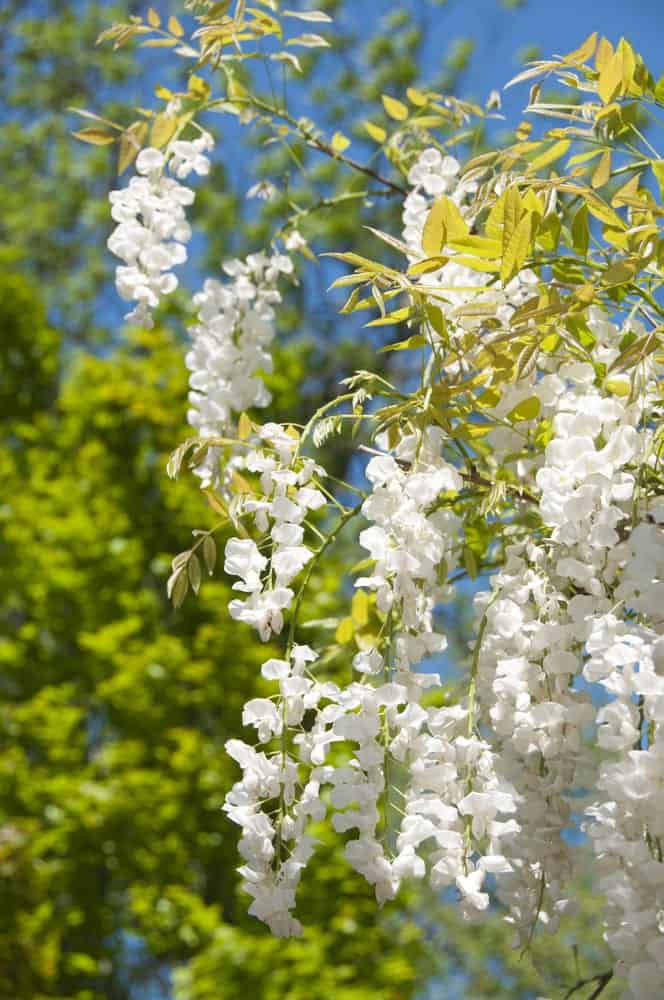 Like many other wisteria species, this variety is also quite well-known for its exceptional fragrance and ethereal beauty. It is a famous deciduous climber with extraordinarily large, heavily-scented clusters that extend up to 30 cm in length. The flowers of this vine are a stunning white that bloom late in spring or early in the summer before the appearance of the foliage.

This is another popular variety of the Chinese wisteria that has a very sweet fragrance and is a free-flowering deciduous climber. The flowers of this vine are typically blue-violet blossoms that grow in pendulous clusters of almost 30 cm long. The flowering period for this wisteria is early spring during which the gorgeous flowers bloom into colors before the appearance of the leaves.

The leaves of the plant are as attractive as its flowers, and they sport a light green color with 7-13 leaflets. 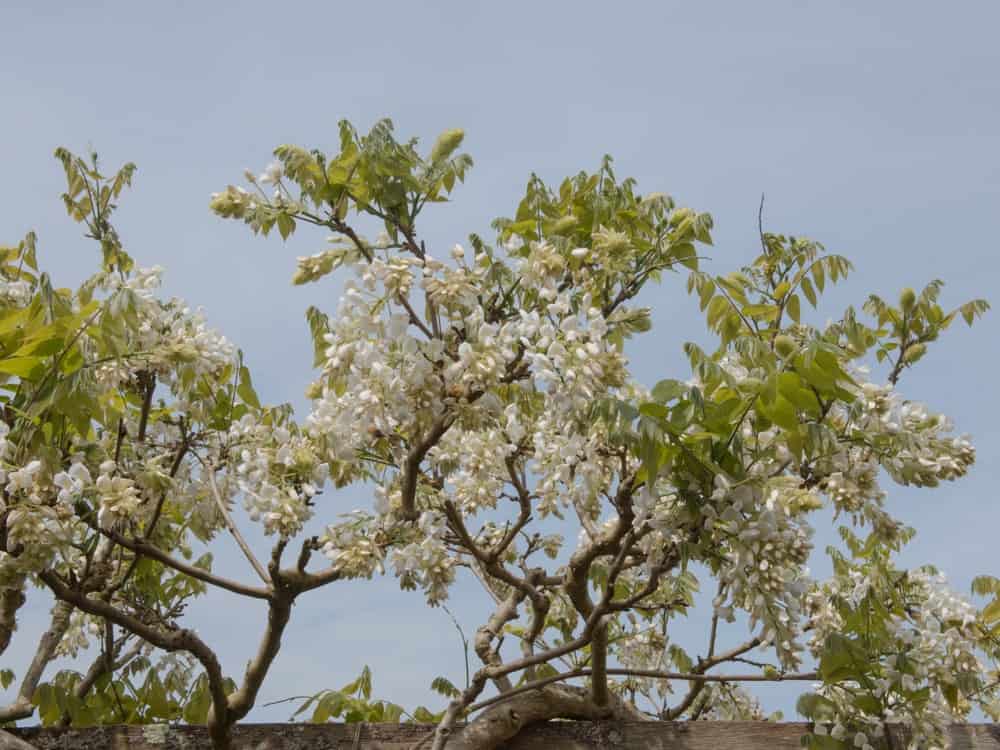 This is a vigorous climber from Japan with vines that grow in an anti-clockwise manner. The leaves of the Silky wisteria have 9-11 leaflets, initially with silky hair that turn a gorgeous yellow-golden shade during the fall season. The racemes, of the flower-growing clusters of this plant, are 6 inches long and really broad with a very strong scent and heavily textured flowers.

These flowers typically bloom in the early season along with their plush leaves. The flowering period of the silky wisteria begins during late spring and ends during the early summer. It blooms really well with age and if they are pruned regularly.

The plant grows to an average height of 10-25 feet and some of its cultivars are available in pretty purple and white colors. Silky wisteria blooms best in full sun, and its flowers burst open all at once during the late spring season. It also needs regular pruning that helps control the shape and size of the plant and boost its flowering process.

Some of the most common and other popular varieties of the Silky wisteria include:

This is a strongly scented variety of the Silky wisteria that typically reaches a height of 10 to 20 inches. It produces masses of hanging sprays with pale lilac flowers that sport a big, white spot. They bloom early during the spring season and are followed by velvety bean-like pods that slowly ripen in the late summer.

This wisteria is an ideal choice for house walls or large pergolas. 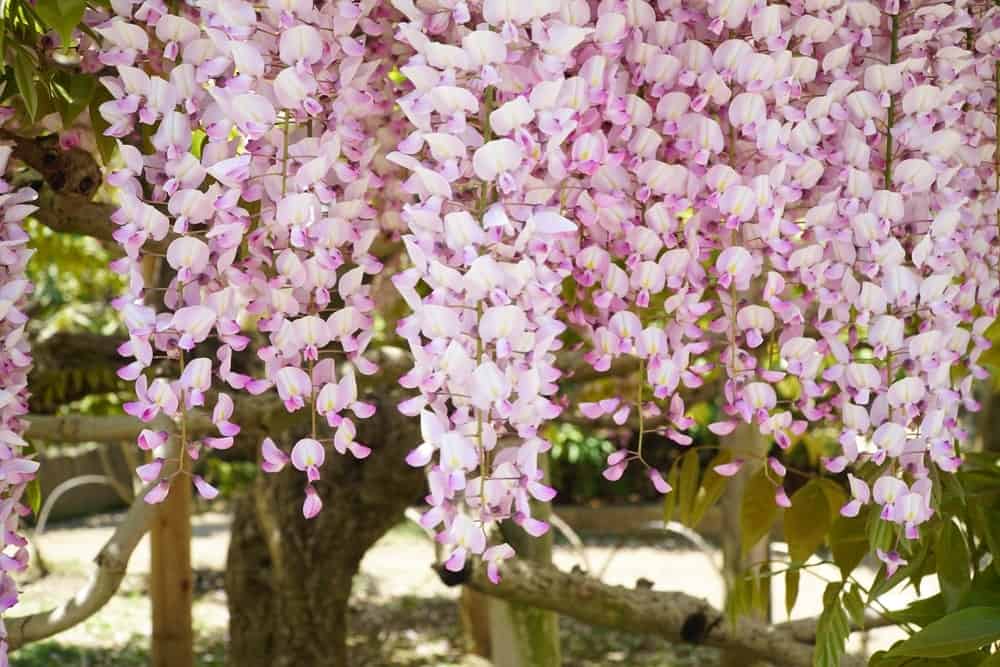 This is another variety of Silky wisteria that is loved for its wonderful scent and its plush foliage. It is a striking climber that produces masses of 6-inch long hanging sprays with a variety of gorgeous pink and white flowers. These flowers also contain a large, conspicuous yellow-colored spot that makes them stand out from the rest.

This vine grows best under the full or partial sun, and it flowers just after one year of being planted. 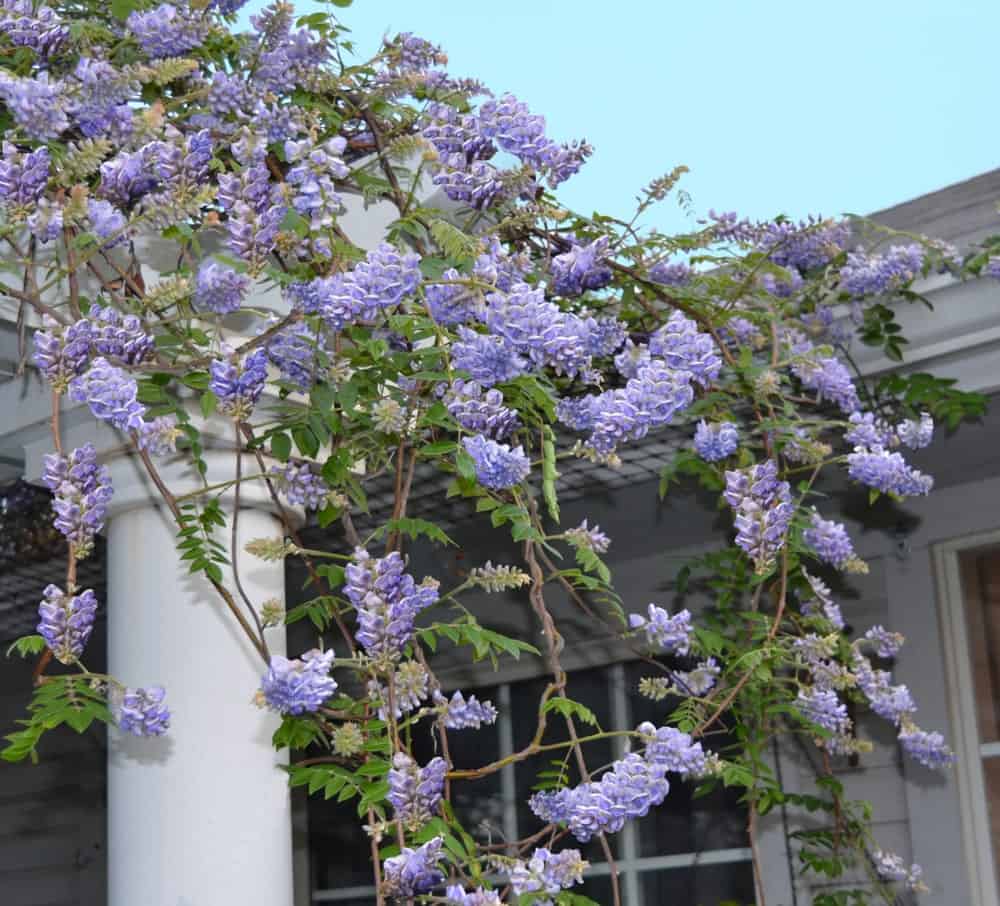 The American wisteria is obviously native to the United States, as the name suggests and is a highly popular choice among a majority of the northern gardeners who wish to grow a wisteria vine. It grows to a height of 10 to 30 feet and mainly grown in regions of the East Coast and the Carolinas.

This wisteria species is generally not as heavily scented as the others, and it also has the shortest clusters or racemes in the entire wisteria family. The clusters are typically 4 to 6 inches, and the lilac-blue flowers of this plant are bunched together in those clusters. The leaves of the American Wisteria consist of 11-15 leaflets, and the vines grow in an anti-clockwise direction.

The flowering period of this wisteria begins in the late spring and goes on to repeat intermittently during the summer season. This flowering period also occurs once the entire foliage is completely well-developed so when the flowers bloom open, they end up hiding behind the foliage. These species are less aggressive as compared to the Chinese and Japanese wisteria varieties.

Since the flowers of this plant appear late after the foliage, their cascades are not as long as the ones found on the Asian varieties, however, the beautiful blue-violet flowers do look more pleasant than those of the Asiatic species. 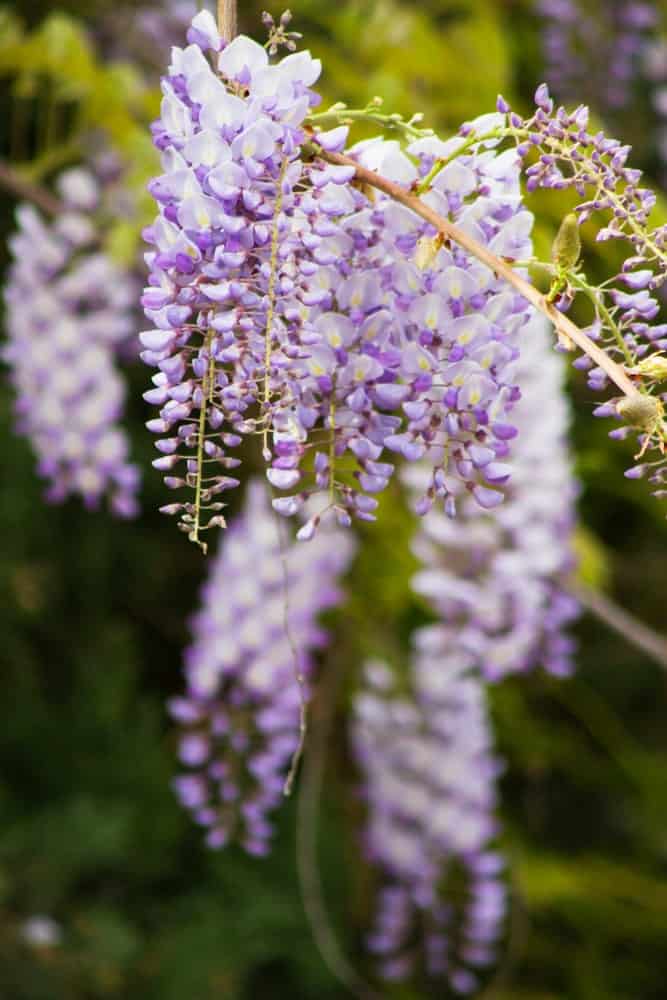 This is more of a slender vigorous climber with vines that grow in an anti-clockwise direction. It is also a woody and deciduous vine that has originated from the southeastern United States. The Kentucky wisteria grows to an average height of 15 to 25 feet and is one of the most cold-hardy species. It is also notable mainly for its unique hardiness.

This vine bears stunning purple-bluish flowers that are less scented than others, and they grow in clusters or racemes that are typically 15-30 cm long. The flowering period for this wisteria begins in the late spring and ends all the way through the early summer season. It also has one of the latest bloom times, so the flowers of this plant emerge sometime in June.

The Kentucky wisteria has lance-shaped leaves that sport a bright green color and contain 8-10 leaflets. Since it produces flowers just after growing for 2 to 3 years, it has quite a reputation for being the quickest wisteria to bloom. Some other varieties of cultivars of this vine also produce flowers that sport a variety of colors including white, pink and deep reddish-violet.

Wisteria may be every gardener’s dream, but they look even more breathtaking on the wall in the front porch of your house. So, which variety of wisteria are you going to get for your home?

Return to all flowers