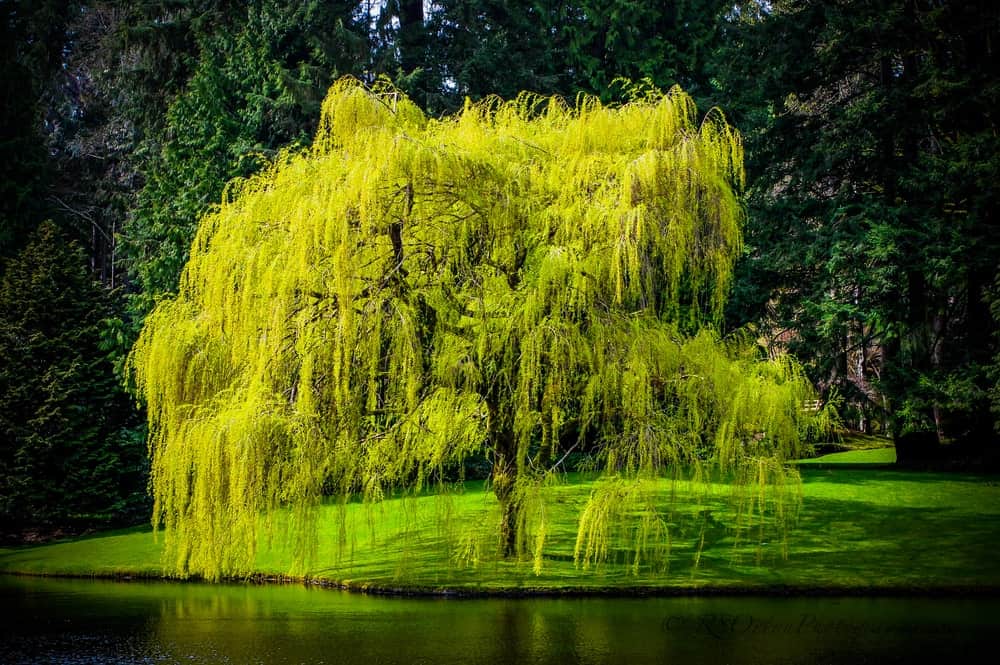 The willow, also known as osiers and sallows, is a deciduous tree, belonging to the genus Salix. Varying in size from small shrubberies to huge trees, willows are moisture-loving plants and are native to temperate to cold regions in the Northern Hemisphere. While these trees thrive best in wet, moist areas, about 400 of their species are living in warm and cold weather regions as well.

Willows have plenty of uses and that’s why they are considered such an important tree variety; from holding back soil to preventing erosion to being a landscape beauty for your yard, willow trees are a force to be reckoned with. In many regions, these tough trees are so much so used for medicinal purposes. For example, willows are used to heal back pain and to treat severe acne.

Willows have many properties and fortunately, there are plenty of them out there to take advantage of. In this article, we’re letting you in on everything you need to know about different types of willow trees. So, have a read! 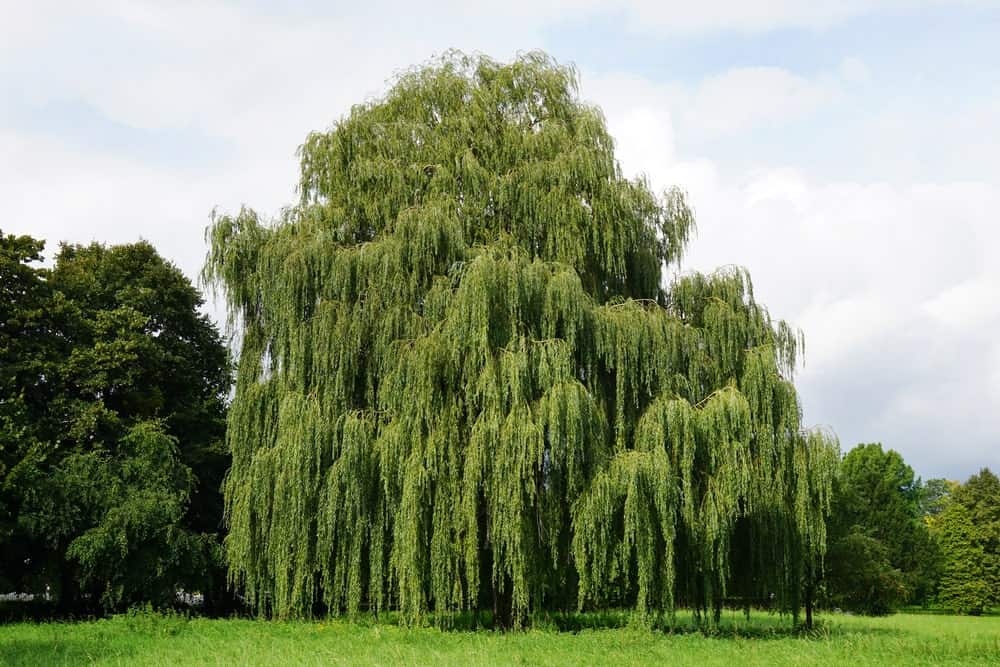 Also known as a Babylon tree, the weeping willow is native to northern China. This fascinating tree is often admired for its unique appearance; as it boasts a rounded structure with drooping branches and elongated leaves. Its dangling leaves and branches which face towards the earth is the reason why this tree is named the “weeping willow”.

These elegant trees make an excellent landscaping choice as their lance-shaped leaves instantly grab the onlooker’s attention. The leaves tend to grow up to three to six inches in length, turning into a bright yellow hue during the fall season. In the spring season, the weeping tree changes into a chirpy one, as it blooms in full glory, with beautiful yellow flowers. The rough and tough grey bark with a deep, strong root system keeps the tree intact. And hence, the tree is able to enjoy a relatively healthy life, for about 30 years. 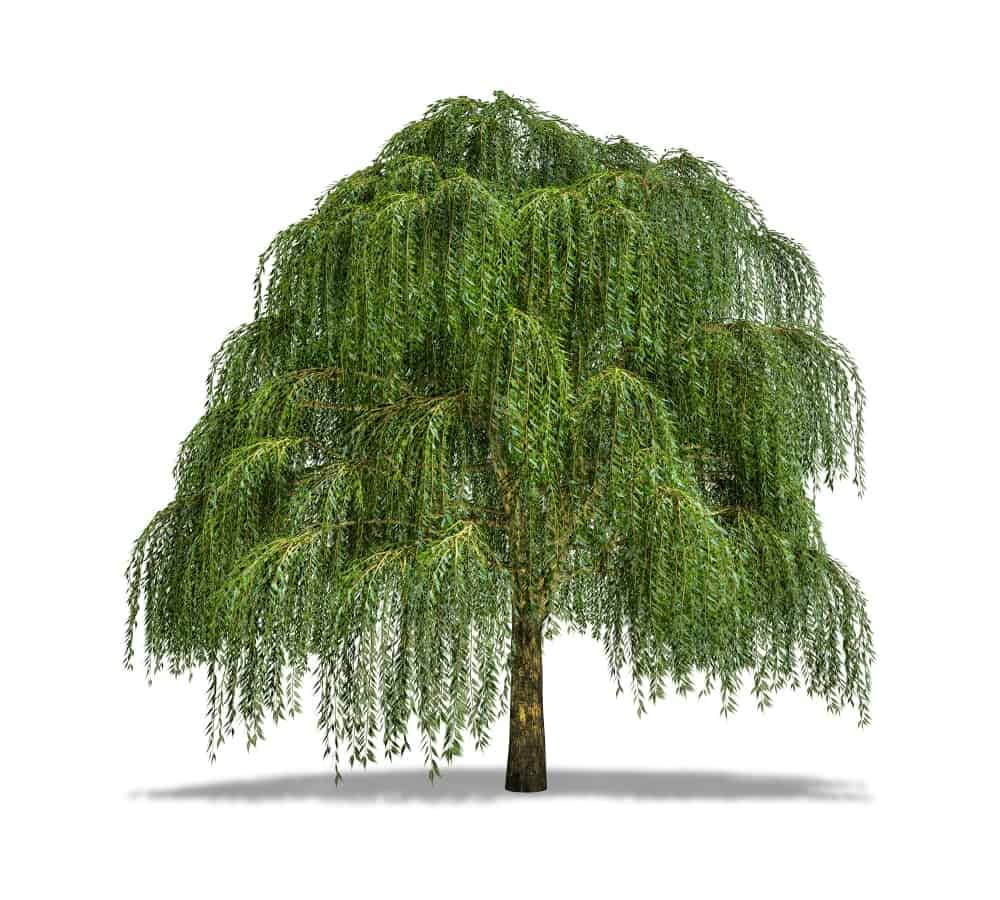 Scientifically known as Salix Alba, the white willow is a glorious tree with silvery white leaves, hence the name “white willow”. This fast-growing tree has the ability to be as tall as 70 feet. Native to Europe, Central Asia, and Northern Africa, white willows are cultivated all across the globe now. In the United States, the cultivation of white willows started early in the 1700s and hasn’t stopped since then.

This is the first willow that blooms with leaves and flowers in spring and the last one to shed leaves in fall. The tree is able to hold onto the leaves late into the autumn season. It also features a furrowed bark and droopy branches which makes the tree more graceful. 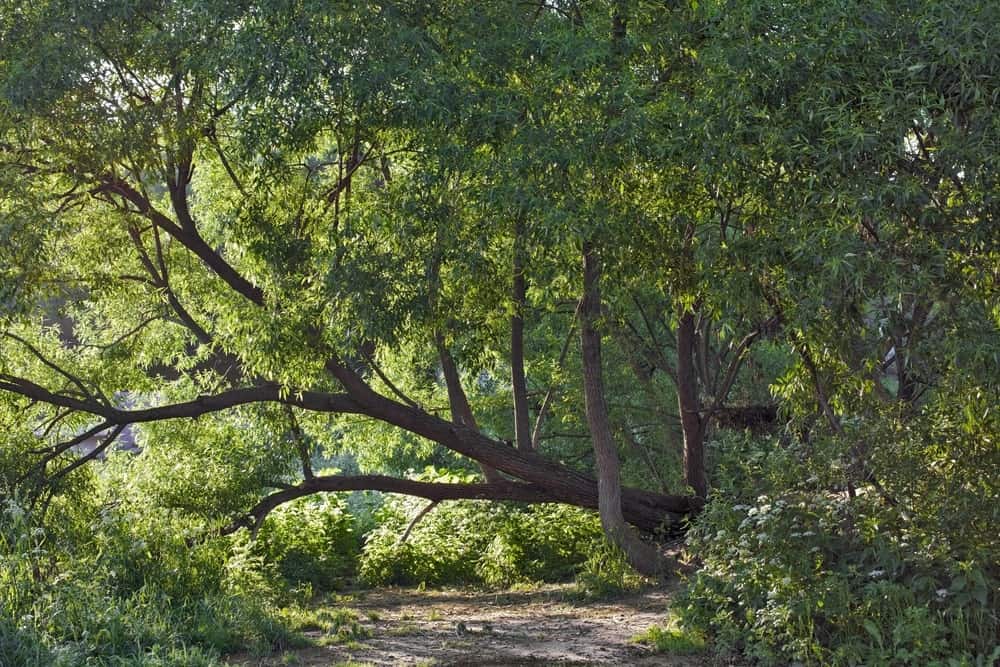 Native to the UK, most regions of Europe and some parts of Asia, the goat willow a deciduous, broad-leafed tree. This heavy-leafed tree is popularly known as the “pussy willow” because of its smooth grey male flowers which bear resemblance to cats’ paws.

These long-living trees have a grey-brown bark which develops smooth twigs as it ages. Unlike other willows, goat willow’s leaves are oval and pointy at the end. The upper side of the leaves is hairless while underneath there is fine, gray hair. In early spring, both male and female flowers spring up on trees. Female catkins are also visible which turn into wooly seeds after getting pollinated by wind.

Goat willow trees can be found near hedgerows, woodland, and scrubs and are also found in more moist-ridden areas like lakes, canals, and streams. 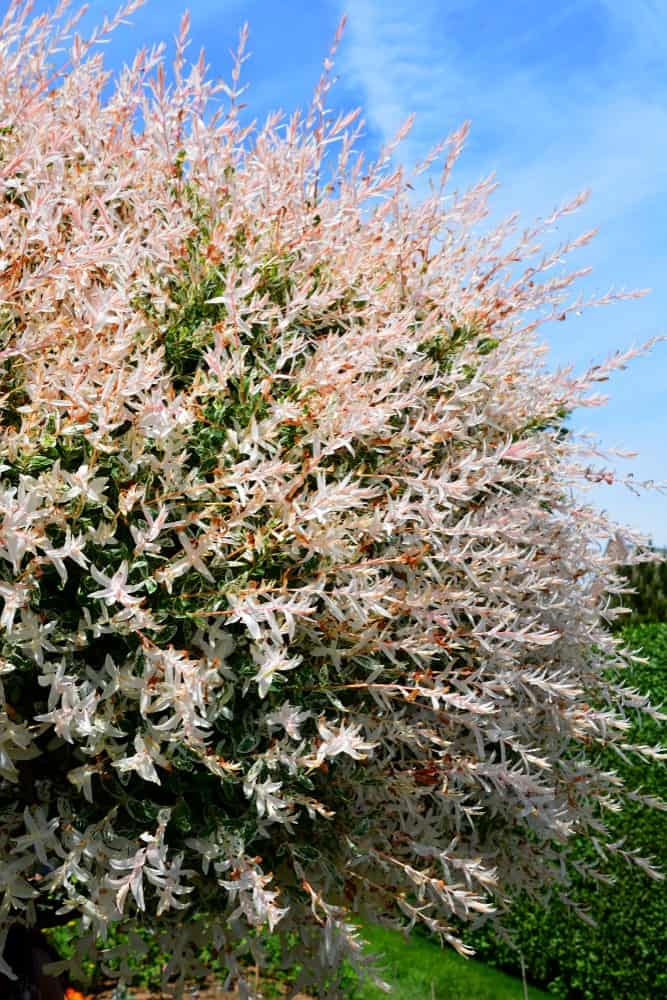 The dappled willow (Salix Integra) is one of the most striking shrubs, exhibiting lovely shades of white, green, and pink. The leaves hint shades of pink when they are abloom but as the season changes, so does the color of leaves. At the turnaround of the season, pink starts to fade away and is replaced with white and green. The branches complement the leaves by turning into bold red in the fall and winter season.

Owing to its showy appearance, this graceful shrub makes for a rich and gorgeous landscape tree in a garden and backyard. Compact in size with lance-shaped leaves, the dappled willow has been the winner of the Award of Garden Merit of the Royal Horticultural Society – all the way more reason to add this beauty to your house landscapes! 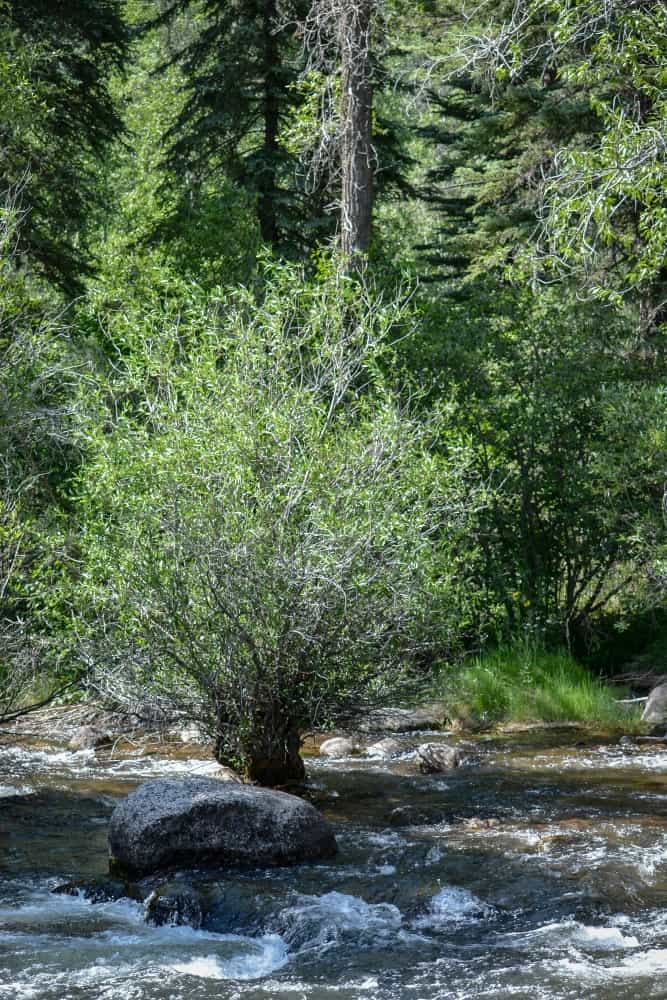 Also known as Salix Amygdalaoides, the peach-leaf willow is a fast-growing species, ranging in a number of sizes from small to medium to large. Native to southern Canada and the United States, this tree requires wet regions to grow such as lakes, streams, and rivers.

One of the defining characteristics of the peach-leaf willow is its leaves that resemble peach tree leaves. The leaves are long and wide, usually yellowish green in color. This shrub also produces yellow catkins which are produced in spring along with pretty-looking leaves.

While the shrub shoots up fast, it lives a short life. That being said, peach-leaf willow comes with its own unique uses. For example, this variety of willow can be employed to fill up empty spaces in yards. It also helps in controlling soil erosion. 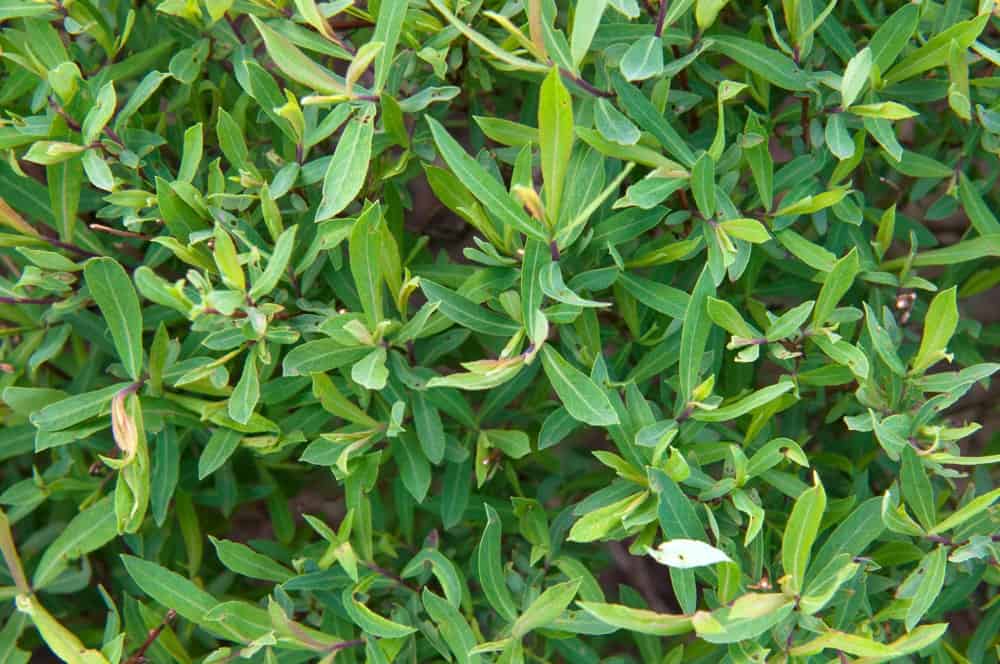 This multi-stemmed shrub comes with a distinctive botanical name “Salix purpurea”. Native to Western Asia, North Africa, and Europe, purple willow is a tall willow tree, shooting up to 8 to 10 feet. One way to distinguish the purple osier is through its bushy outlook with trunks and branches in light gray to grayish-brown tones. Although the bark is thin, it is quite sturdy; and twigs appear in multiple colors such as yellow, brown, green or purplish red.

One of the notable properties of the purple osier willow is that catkins develop before the leaves. Immature male catkins are shaded reddish purple with smooth hair on them. Each male catkin has round florets with a stalk in the middle. Florets contain anthers that are purple but later on changes into yellow. On the other hand, female catkins are yellowish green when immature and consist of many florets and stalks. 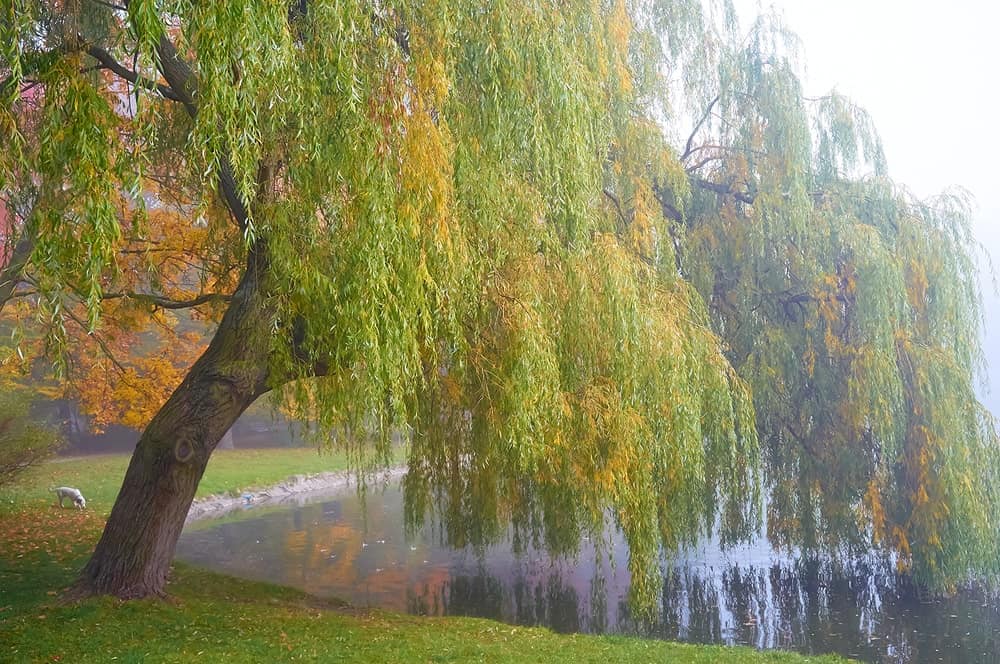 Scientifically known as Salix Exigua, the coyote willow is a native species of North America. Commonly known as the Sandbar willow, the coyote willow is a plant species that has been used by the Great Basin Indians for many years. They use it to create material goods such as baskets, fish traps, ropes, bows and arrows, and cradleboards. There was a time when this willow variety was used for medicinal purposes as well. It was prepared in the form of healing teas or powdered barks to cure various ailments like dandruff, toothaches, and dysentery.

To identify this willow, you must know that the sandbar willow is a shiny green tree with straight and slender branches. It is a tall-growing willow as it can shoot up to 16 feet tall.

Research shows that the coyote willow can be recognized in two subspecies such as Salix exigua exigua and Salix exigua interior. 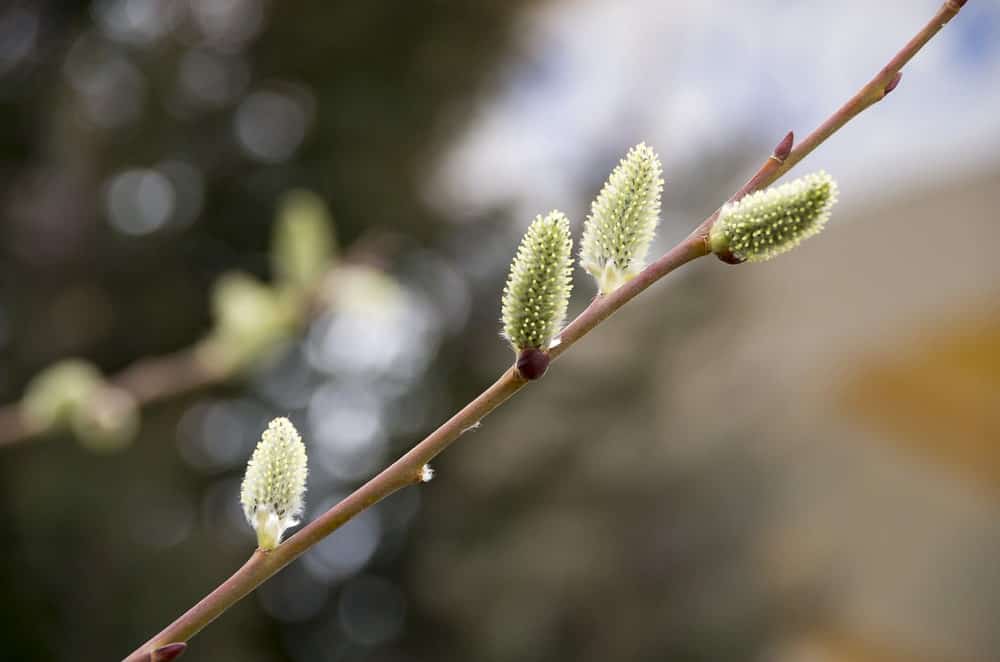 Also called Salix scouleriana, the scouler’s willow is one of the smallest varieties of willow, ranging from 2 to 12 m in height. Native to western North America, this deciduous shrub exhibits multiple fibrous and wide-spread stems, helping the shrub to stay a strong one for a long period of time. This diamond-shaped willow was discovered by John Scouler and hence named after its discoverer.

The shrub boasts a dark green upper surface while whitish lower surface with rusty-colored hair. The leaves are usually wide from the middle and have acute ends. It also produces catkins and small hairy fruits along with a darkish brown bark.

As compared to other willows, Scouler’s willow has the potential to tolerate mild dry conditions. The wood of the willow is used for carving purposes. it is also cultivated to control soil erosion and heavy bodies of water. 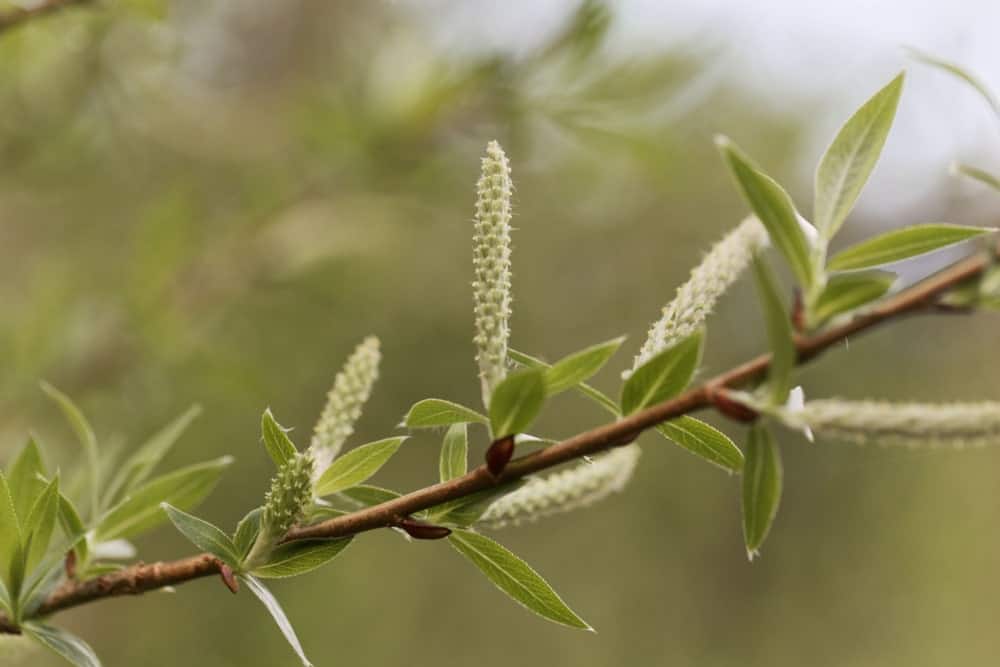 Botanically called Salix triandra, almond willows belong to Europe and Western and Central Asia. The reason why it is named almond willow is due to the dull, dark green almond-shaped leaves. Like other typical willows, both male and female catkins are produced in early spring along with new leaves.

The tree has a wide range of amazing uses. In Russia, the plant is used for producing nectar for honeybees in the honey industry. The small-growing plant is also an excellent source of biofuel energy production. The shoots are used for basket-making in various parts of the world. That’s not it. This moisture-hungry willow offers plenty of edible uses. The inner bark (raw or cooked) can be dried down and grounded into a powder form. Later on, it can be added to cereal flour to make bread out of it. 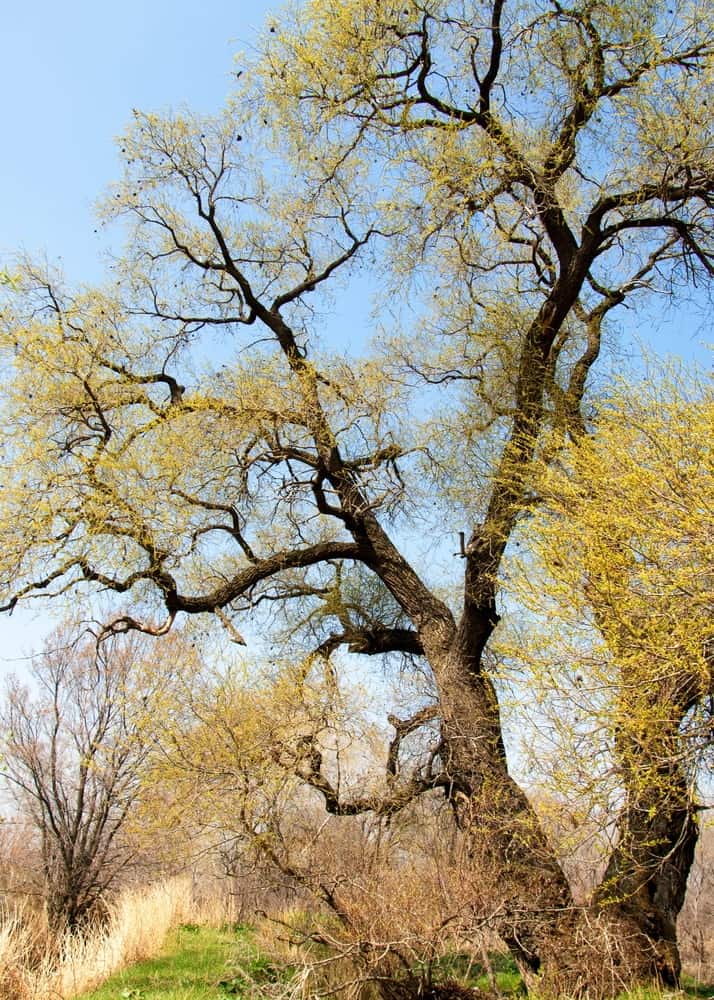 Did you know that the crack willow was named after the twitching sound of breaking or falling branches?

Wondering where to find this variety of willows? They are widely populated near the water bodies in the UK, Europe, and Western Asia. 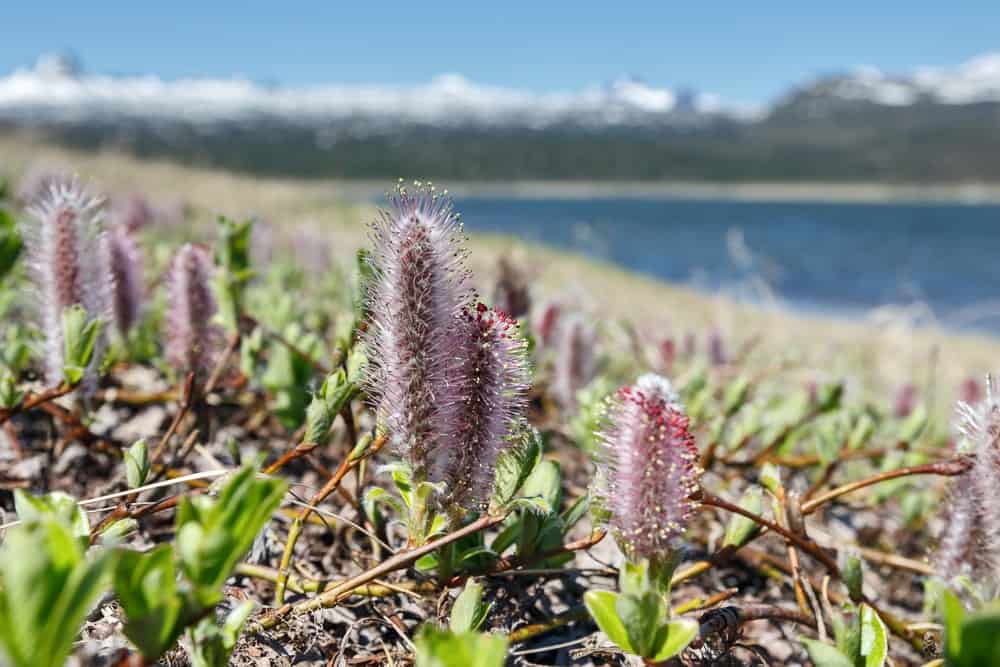 Also known as Salix Arctica, the arctic willow is a tiny form of willow, belonging to the family of Salicaceae. The willow tree has a natural capability to survive in harsh climatic regions of arctic and subarctic. A small distribution of these light purpled hued willows can be seen in the Arctic Ocean.

It may not be much of a use to humans, but it is a rich source of food to arctic animals. For example, caribou, muskoxen, and lemmings feed on the twigs and barks of the Arctic willow. 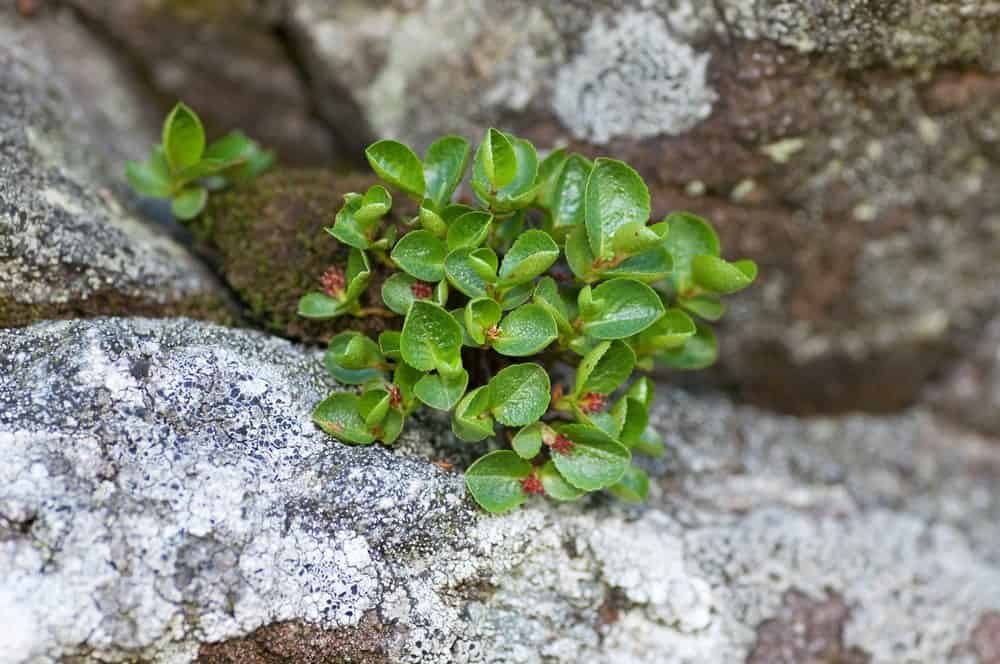 Also known as the least willow or snowbed willow, the dwarf willow belongs to the Salicaceae subfamily and is widely distributed in the North Atlantic and East Canada. This is a low-growing shrub which grows up to only 2 to 5 cm in height.

The leaves are usually round in shape with toothed ends. Like other willows, it produces lovely catkins. Female catkins of this species are tinted red, while male catkins yellow.

There are different types of willow trees which can be found throughout the world, with each of them having unique properties and uses.