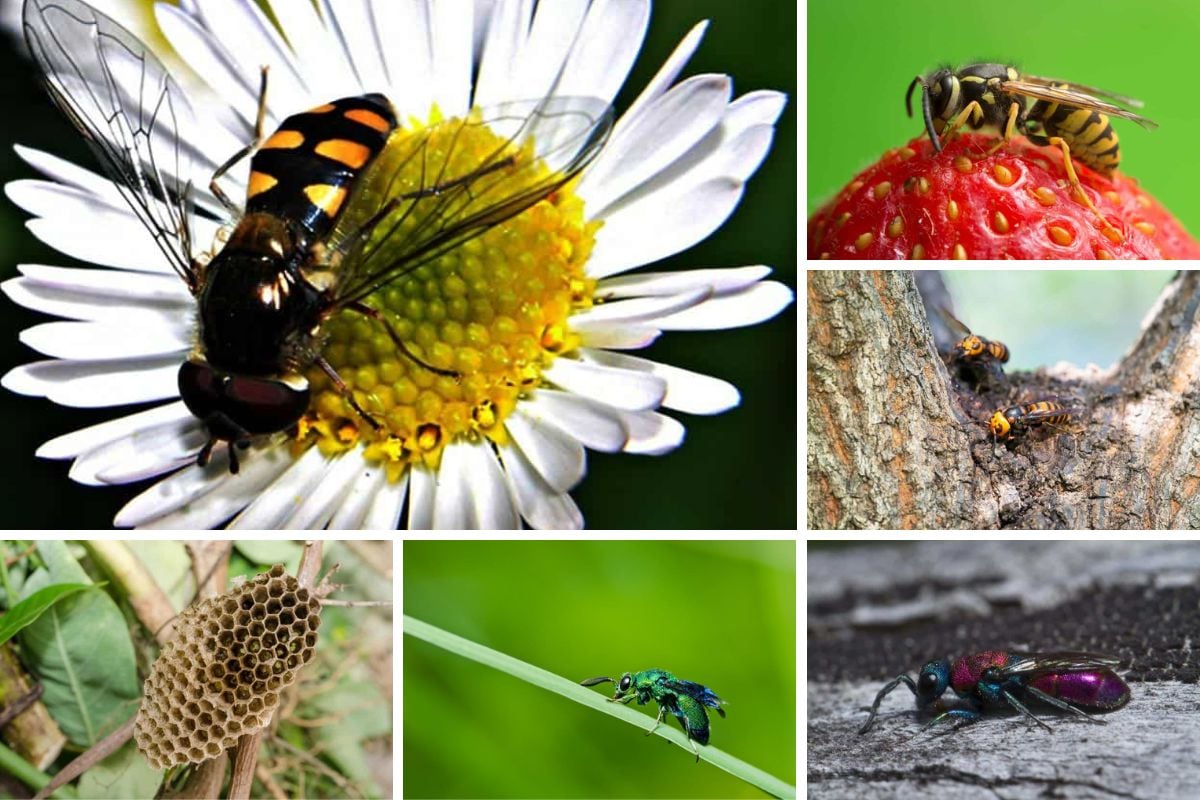 Neither ant nor bee, the interesting insects that we call wasps appear to be a combination of both. Although their slender, segmented bodies, their stings, and living habitats are similar to those of bees, their pointed lower abdomen, slender waists, and legs with fewer hairs set them apart.

One more important difference we must understand before we stir up the proverbial wasp’s nest: wasps can be dangerous and aggressive.

Their role in the ecosystem ranges from being pollinators to predators, while their extraordinary ability to take parasitic control of pests makes them invaluable in horticulture. Their defense mechanism against threats is so well-known that even when a human being acts irritable or hostile, we say they are being ‘waspish.’

There are about thirty thousand known species of wasps and they vary from each other vastly, in color, size, habits, and their relationship with the ecosystem. From ordinary yellows and browns to bright reds and blues, wasps are astonishingly diverse and have wide-ranging relationships with other creatures. (Source: National Geographic)

Let us read on to explore just how extraordinary and varied these creatures can be.

Table of Contents Show
Anatomy of a Wasp
How are wasps and bees different?
Types Based on Living Conditions
Solitary Wasps
Social Wasps
Divisions into Families
Chrysidoidea
Vespoidea
Specialized Wasps
1. The Jewel Wasp
2. Cuckoo Wasp
3. The Yak Killer: Asian Giant Hornet
4. Yellowjacket Wasps
5. Cicada Killers
What Are Wasps Even Good For?
In Horticulture
In Pollination

Anatomy of a Wasp 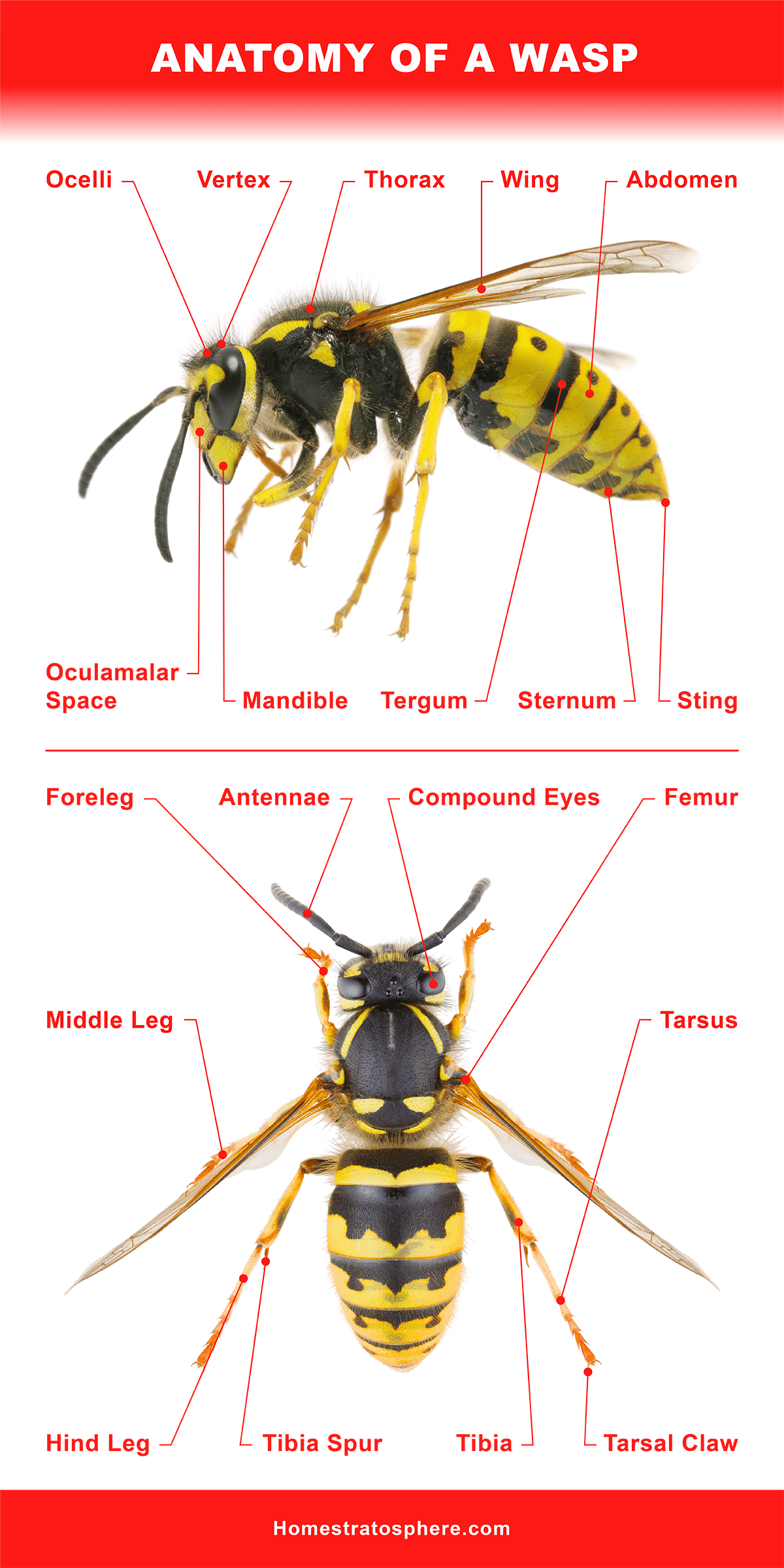 How are wasps and bees different?

Apart from the aforementioned visible differences, wasps and bees also differ in their nesting habits. First off, all bees depend on their colonies to survive. Each bee is a single cog in the multi-dimensional machine of life.

And because each bee has a specified role within the community, it is very rare for them to be able endure when they are made to leave. In contrast, a majority of wasp species are independent and can easily survive on their own.

Another important difference between the two is the raw material they use for their homes and their varying processes of nesting. While bees build their hives by secreting a wax-like substance, wasps use chewed-up wood fibers for the construction of their nests.

When combined with their saliva, wood fluff forms a papery substance that is then molded into intricate hexagonal hives. Moreover, bee’s nests are permanent structures that can exist for years on end, but wasps build a new nest every spring, abandoning the previous one completely in search of new beginnings. 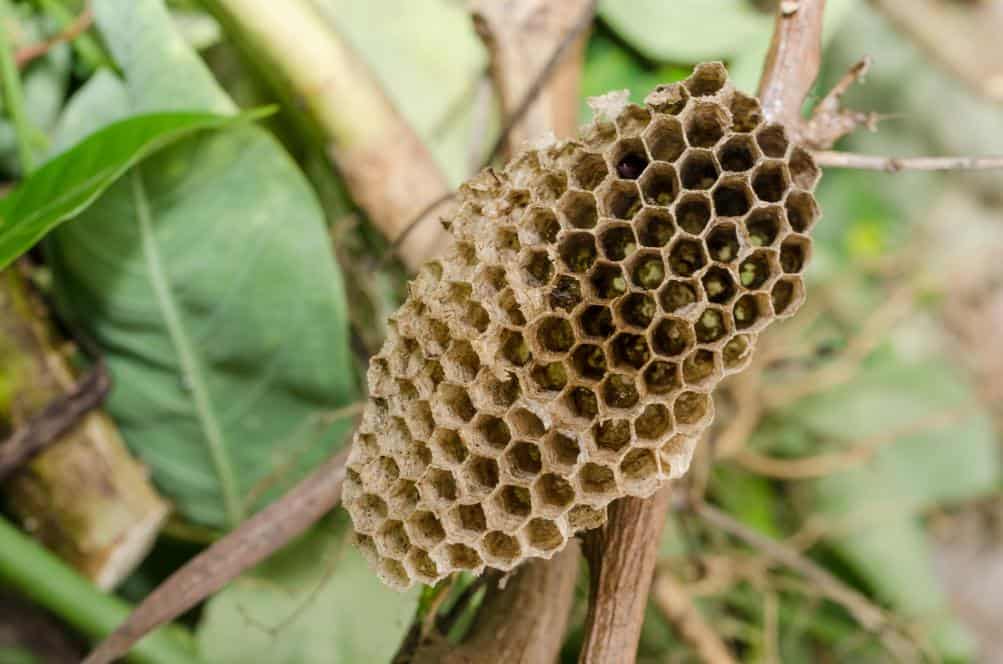 Wasps only existed as unsociable insects in the beginning. Slowly, they developed enough social skills to be able to exist in communities, each wasp performing a function essential to the mechanisms of food acquisition and reproduction.

In fact, the bees we see in the wild today, ranging from honey bees to bumblebees, evolved from wasps and the two are taxonomically close relatives.

Types Based on Living Conditions

Wasps are widely subdivided into two groups based on their living conditions; they are either lone warriors or team players.

An astonishing number of wasp species are able to thrive in solitude; about 97% exist independently in underground, tubular mud nests. They lay their eggs in these nests, and then bring immobilized insects to their nests to feed their larvae. The strategies for food attainment though, may differ from specie to specie.

Solitary wasps differ so much in their nesting, predatory and food habits that it’s impossible to comment on them as a whole. But most of them are extraordinary predators that go to absurd lengths for their food.

Social wasps are relatively rarer, with only 3% of all wasps in their ranks. These buzzing, flying insects don’t stay in one place for too long. In fact, they build their nests from scratch every spring and never in the same place twice.

A majority of social wasps belong to families Vespinae and Polistinae. These wasps have a particular role; a caste system has been set in place which includes one or several queens, a small number of drones, and infertile female wasps as workers.

The colony is initiated by a single queen bee that builds a small nest and lays eggs that develop into workers later on.

This caste system, though highly complex, is not exactly perfect. Worker wasps who have already fed the larvae are left with nothing to live for and hence they roam the land in search of food just for the sake of it. They are waiting to die which makes them aggressive.

This is what gives wasps the negative publicity: for the sake of their sweet tooth, they needlessly attack humans and human food.

All living things that are found on planet Earth are classified into a very detailed system of categorization. They are sorted first into kingdoms, then phylums, classes, orders, families, genus, and species. Wasps are insects that are further subdivided into order Hymenoptera, and more subdivisions into families can be made on the basis of structure, function, and habits.

These complex families have a large diversity of wasps which have some characteristics in common; one of them is their small size. Wasps in family Chrysidoidea don’t grow more than 15mm in size. Some of these species are able to sting, but they are non-venomous to other creatures.

The Chrysidoidea family includes an interesting type of parasitic wasp whose life cycle as larvae begins within another insect’s body, a host chosen by their parent to lay eggs into.

The Vespoidea family includes a vast number of sub categories of wasps:  velvet ants/velvet wasps, myrmosid wasps, spider wasps and many others

They come with a broad range of lifestyles, from social to solitary, predatory to parasitoids, with a few scavengers and herbivores.

The subfamily Vespinae has the most well-known eusocial wasps, which includes hornets and yellowjackets: the yellow and black monsters that have come to represent all wasps.

Some genus of this family are nocturnal, especially those found in South East Asia, and another genus has been around for so long that proves of existence have been derived from Eocene fossil record. They are found on almost every continent except Antarctica. (Source: Wikipedia)

This family consists of four tribes and almost 1,100 total species. It is the largest family after Vespinaem, and is also known as paper wasps, which is a misnomer since many other families of wasps build their nests out of paper. These wasps are mostly found in tropical climates, but can also easily survive in temperate ones.

Out of the thousands of different species of wasps, let’s have a look at some that are out of the ordinary. 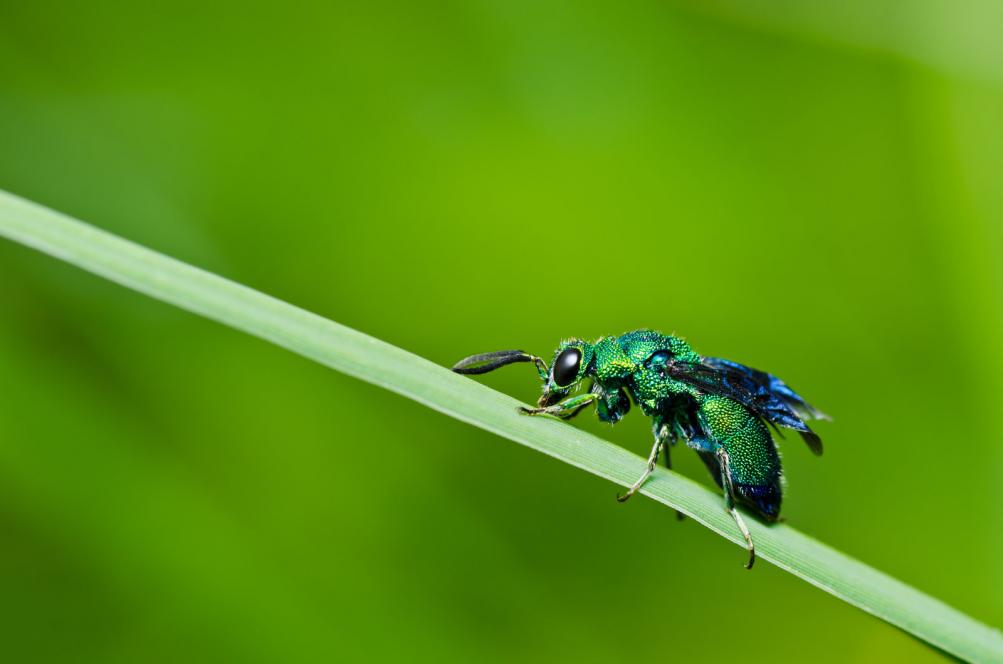 The Jewel Wasp is thus called because of its beautiful, gem-like coloring. Even though the name sounds innocuous enough, this wasp could easily be called the most mysterious and fascinating of all wasp species. It has an extremely specialized set of skills that is eerily close to neurosurgery.

These wasps are predators that attack cockroaches in particular, but instead of killing them and feeding on them for nutrients like any regular wasp, Jewel Wasps insert their sting inside the brain of a cockroach and inject a cocktail of venom.

The venom renders the prey incapable of making decisions. The cockroach becomes a pawn of the wasp, a zombie, who can only do its primary’s bidding. 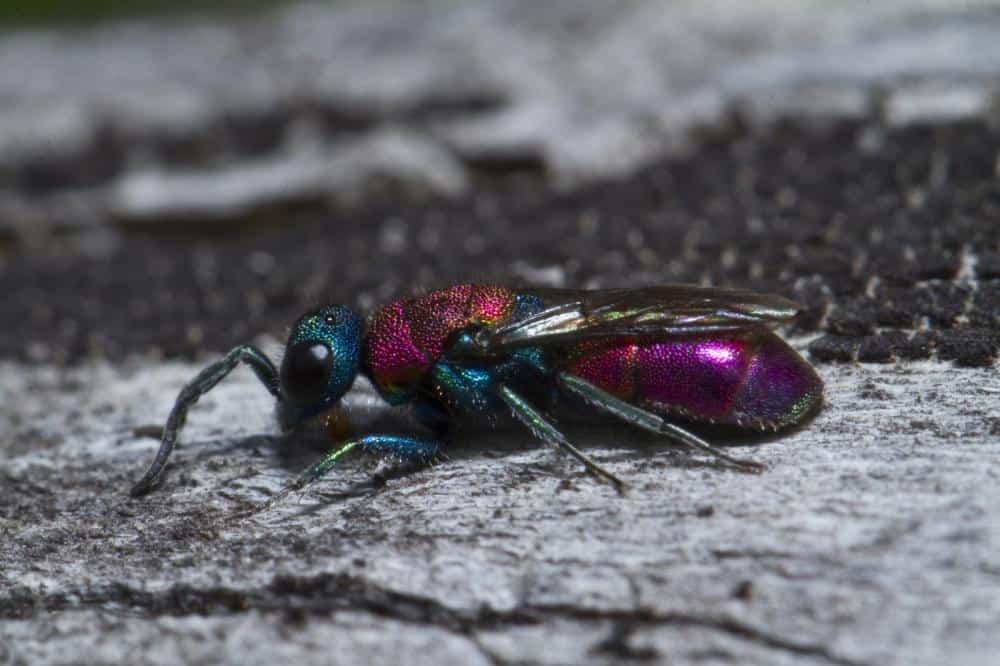 The Cuckoo wasp is a beautiful, bright mix of red and green, designed with intricate sculpturing on the exoskeleton. Because of its color, it is often called the Red-Tailed wasp. This particular wasp is quite small in size and has the ability to curl up into a ball when threatened. (Source: Britannica)

These wasps are associated with cuckoos because just like the birds, these wasps do not build their own nests. Instead, they lay their eggs in the nests made by solitary wasps and steal their food for their own larvae. 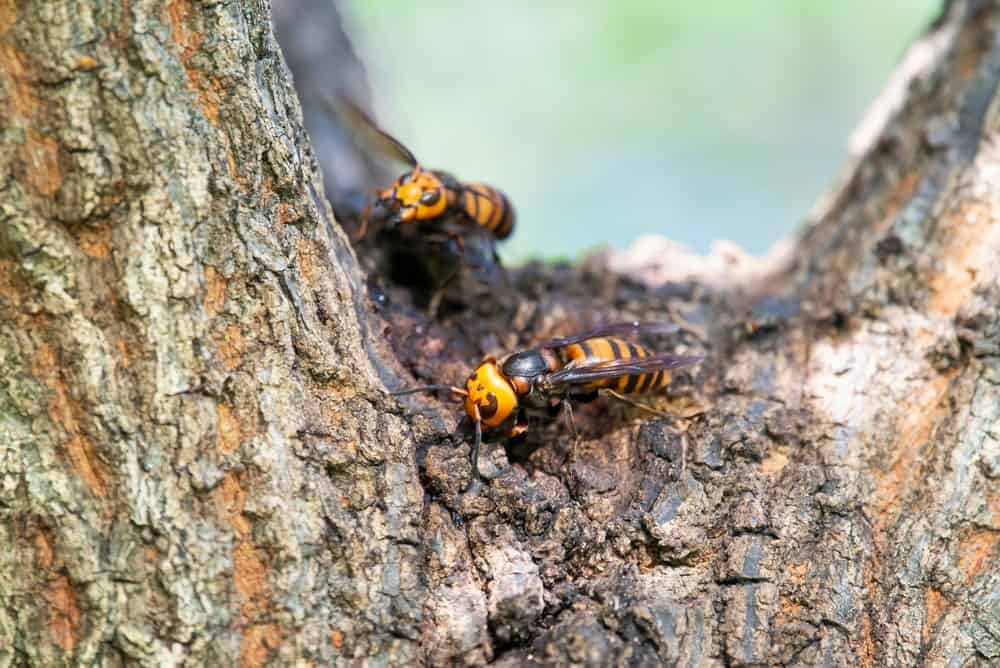 True to both its names, the Yak Killer wasp has enough venom to kill the large animal in one sting, and is big enough to be the stuff of your nightmares. It is an extremely aggressive wasp that kills around forty people in Japan every day.

The sting of a Yak Killer has been described as unbearably painful by those who have survived to tell the tale. (Source: BugsFeed)

Interesting fact about the Yak Killer: these hornets are also used to create an interesting alcoholic drink, which takes up to three years to prepare and is said to have various health benefits. 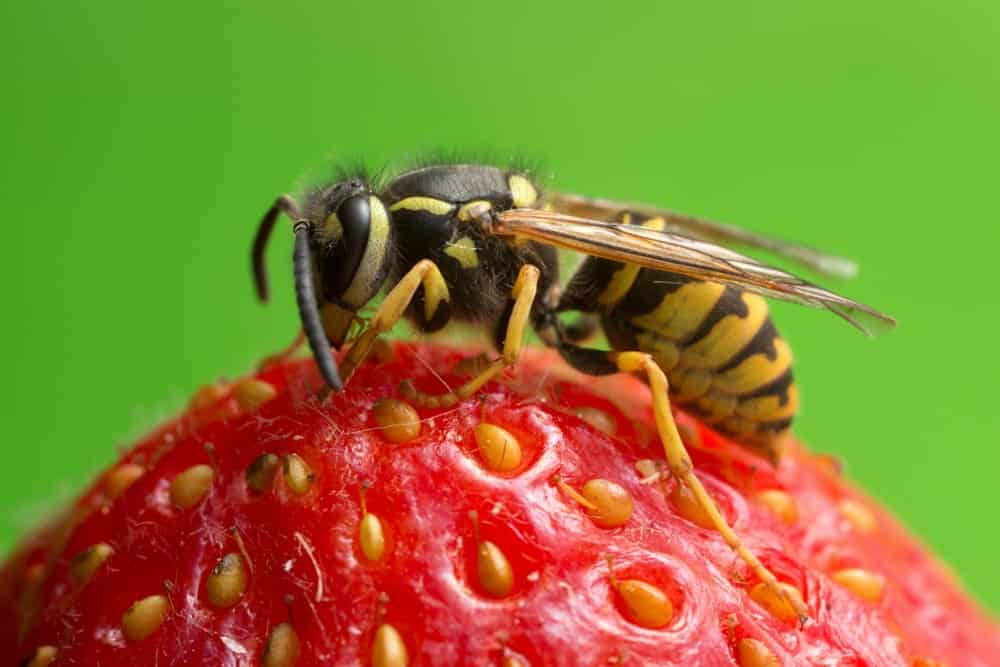 Yellowjacket wasps are quite similar in appearance to bees, and are similarly only dangerous to humans who are allergic to the venom in their sting. Although, while a bee can only sting once, Yellowjackets have lance-like stingers that can sting multiple times. (Source: USDA)

Yellowjackets build their nests on top of trees, in shrubs, or even inside human-made buildings. Their homes can also be found in soil cavities, underground tunnels, fallen trees, and even mouse burrows.

The protective aggression of these infamous wasps is mimicked by many other wasps to secure their nests and larvae. 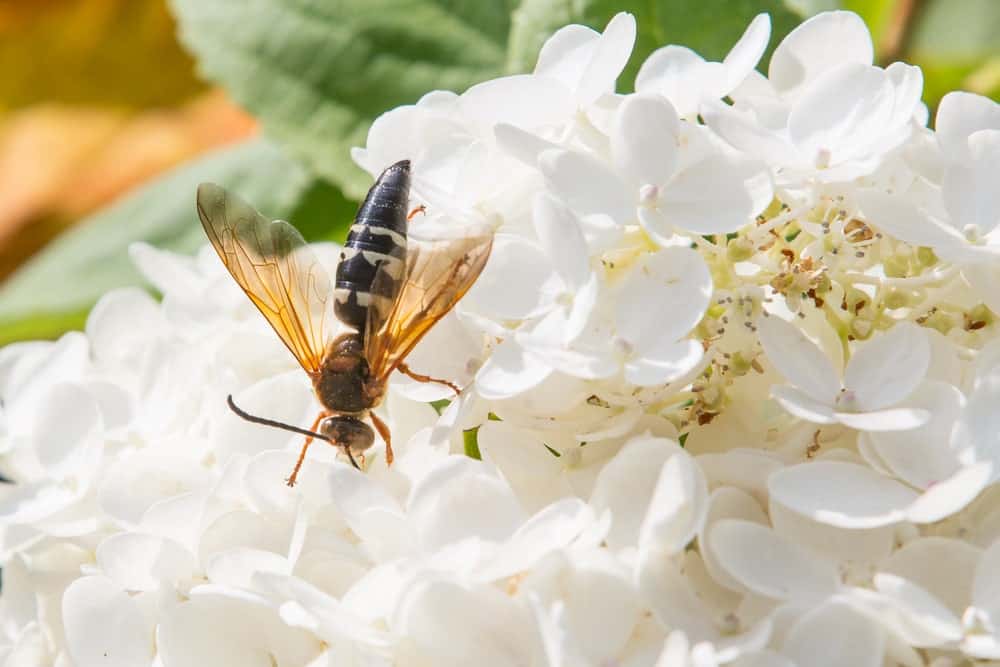 Cicada Killers are scary, and sound like they have flown right out of a horror movie. They use their sting to not kill, but maim. Cicada Killers paralyze their victims, which can be insects as large as cockroaches. The still-alive insect is then carried to the nest where the wasp has already laid eggs. The incapacitated insect is then used to feed the larvae and provide essential nutrients.

What Are Wasps Even Good For?

Despite having earned a notoriously bad reputation even within the insect community, wasps have a role to play in ecology.

Since wasps are specialized predators, there are almost no insects on earth that are immune to their attack, including pests that attack plantations. This makes wasps immensely useful tools as pest control in horticulture.

In this way, wasps not only prevent pests from taking over cultivated areas, they also improve the biodiversity of the ecosystem by preying on enough members of common species to stop them from becoming dominant. (Source: ScienceFocus)

Just like bees, some types of wasps jump from flower to flower for nectar, becoming a primary source of pollination. Flowers are largely dependent on insects for spreading their pollen far and wide.

In the tropics, for example, Fig wasps are responsible for pollinating about 1,000 species of figs. (Source: USDA)

Since fig flowers are found inside the fruit, wasps enter through small holes and pollinate the flowers after taking the nectar for themselves.

When we begin to explore all the wonderfully diverse species on planet Earth, we discover the complex ways in which they form relationships with one another.

Whether the connection is parasitic or symbiotic, living beings are all beautifully linked in this biosphere. Here’s hoping that the next time you see a wasp, you will consider all of what you’ve learned here before swatting it away from your food immediately!

Home Expert (Bot)
Hello, how are you? Ask me anything about interior design, home improvement, home decor, real estate, gardening and furniture.
50 shares