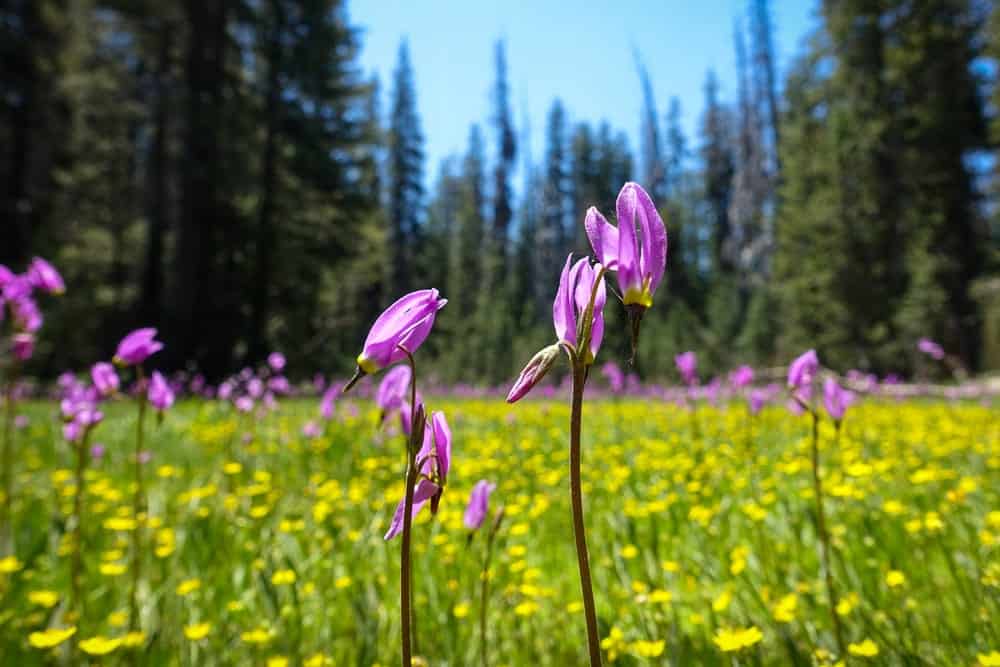 Botanically known as Dodecatheon meadia, shooting star flowers are native to the Great Plains states, Texas, parts of the Midwest, and Canada. Regions where you may hardly come across these deep purplish-pink blooms are Northern Florida and the Appalachian Mountains. Note that the genus name “Dodecatheon” is derived from two Greek words, “dodeka,” meaning twelve, and “theoi,” meaning gods. Overall, it refers to the plants protected by the Gods.

Belonging to the primula family (Primulaceae), these perennial plants are widespread from the central United States to the Eastern United States, covering regions like southern Wisconsin, western Pennsylvania, the south of Eastern Texas, and Georgia. Widely known as the ephemeral spring wildflower, shooting stars are mostly found in moist prairies, meadows, and open woods in USDA zones 4-8.

Did you know that this lovely wildflower received the Royal Horticulture Society’s Award of Garden Merit in 1993? This award-winning flower got its name from the way it hangs from tall stems. Like a falling star, this purple-hued bloom points in the downward direction.

Owing to its pretty color and smooth green leaves, this flower species is commonly cultivated in home gardens for ornamental purposes. Having them cultivated in your garden or backyard will spring up your space with bright, vivid colors. Surround nature’s beauty with other garden ornaments such as decorative garden balls, stenciled rocks, colorful pebbles, mirror garlands, outdoor chandeliers, etc. With these creative ideas, you can turn your boring garden into an unforgettable one.

Shooting star flowers boast exquisite beauty and elevate the beauty of any outdoor space. What makes this type of flower even better is that these alluring spring blooms come in several types. Whether you want to learn about shooting star blooms or are interested in cultivating more than just one type, this article will be the perfect guide for you. 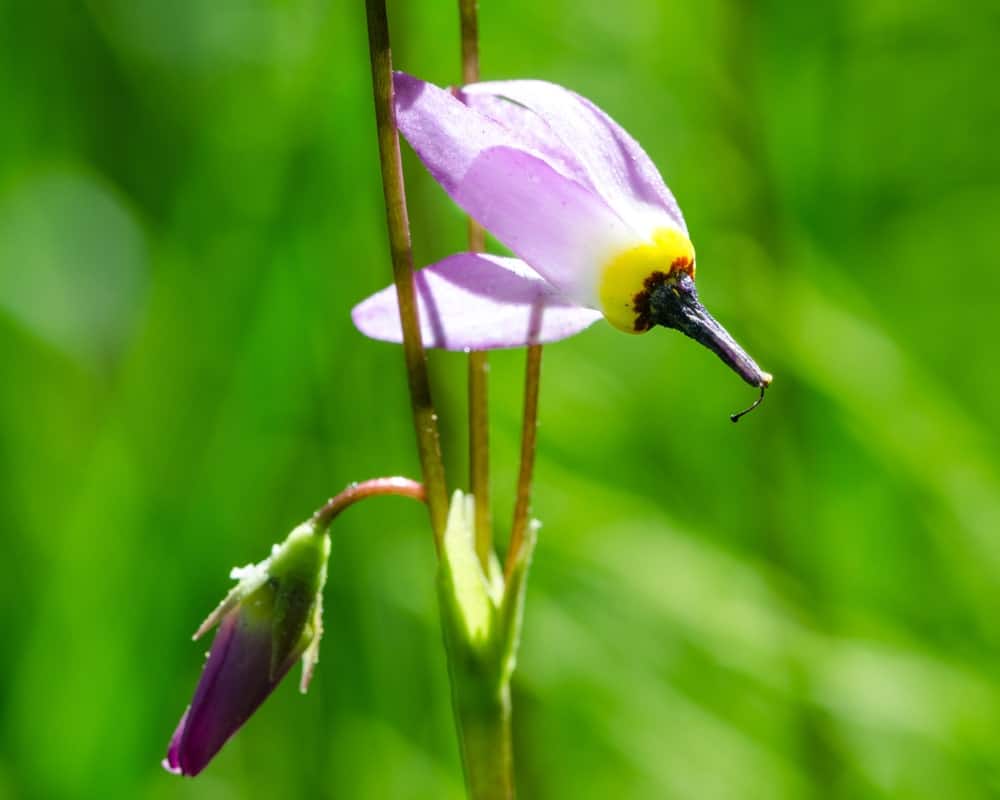 Know by the common name – alpine shooting star – Dodecatheon alpinum is a popular perennial plant in the primrose family – Primulaceae. This flowering plant is native to the Western United States, in Arizona, Oregon, Utah, and California. The plant ideally grows in moist soils of the mountains situated in the Transverse Ranges and the Sierra Nevada.

Alpine shooting stars prefer aquatic regions. However, they sometimes grow along the edges of bogland or in shallow rivulets. Dodecatheon alpinum consists of tall, thin stems and narrow, straight leaves. Both the stems and the leaves are darker in color and have one or more alluring flowers. Appearing in a light pink or a lavender color, the flower blooms with a mouth directed toward the ground. As it ages, it becomes more erect. Although the flower comes in a pinkish-purple color, it usually has a white or yellow base.

The bloom time of alpine shooting stars is from June to August. Make sure that you cultivate it in the springtime. 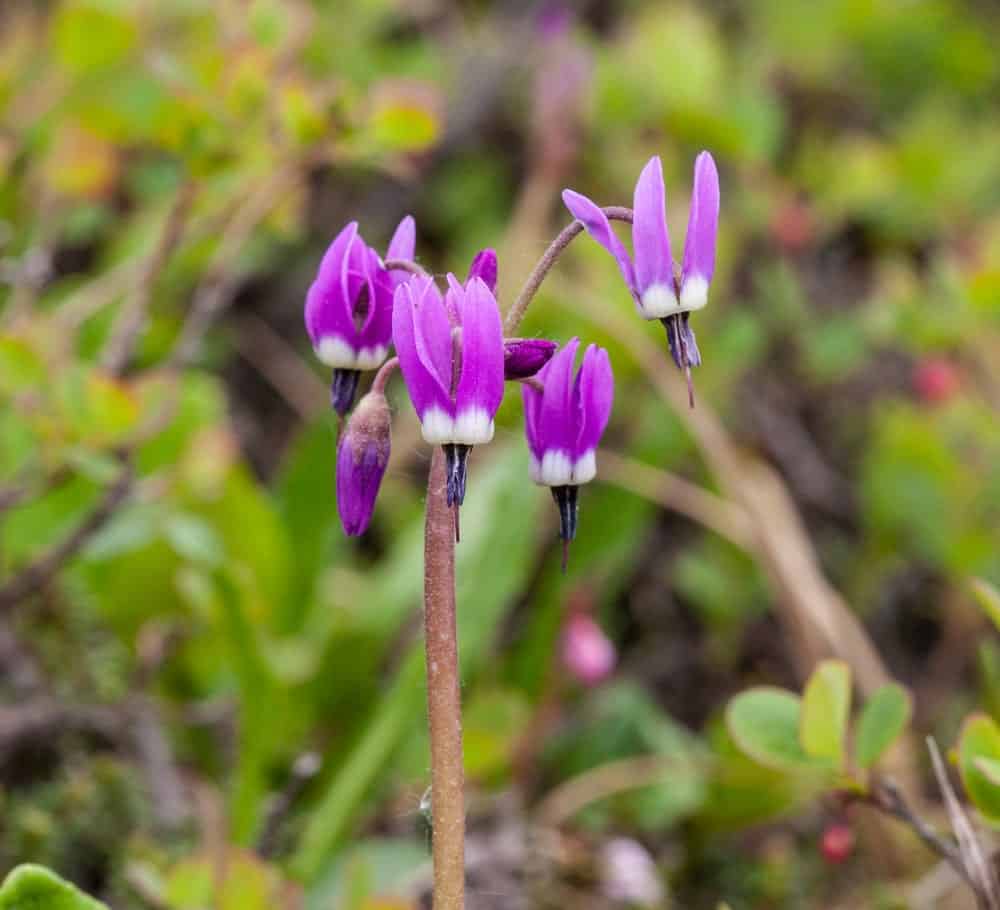 Scientifically called Dodecatheon austrofrigidum, frigid shooting stars are native to Oregon and Washington in the United States. This flowering plant grows on the slopes of the Pacific Coast Ranges such as on the Olympic Peninsula. It tends to grow in thin soil and several mossy or grassy turfs. The plant can also be cultivated in wood substrates. Belonging to the Primrose family, frigid shooting stars consist of approximately 700 species which are confined to the north temperate zone. The population is small but is scattered in approximately eight locations.

Some of its popular species are highly prized for their ornamental values such as Douglasia, Cyclamen, Primula, and Dodecatheon. Unfortunately, some of these species have been collected to the extent of becoming extinct.

Frigid shooting stars were first discovered in 1945. However, it wasn’t until 1979 that they were extensively described. This perennial herb produces tall, leafless stems and intense-colored leaves from a basal rosette. Distinctively known for their lavender flowers and purple anthers, frigid shooting stars are often confused with another species of shooting star flowers – Dodecatheon pulchellum. However, they are differentiated on the basis of their filaments. Dodecatheon austrofrigidum has filaments that are separated from the stamens. On the other hand, the few-flowered shooting star comes with a fused filament tube at the base of the stamen. 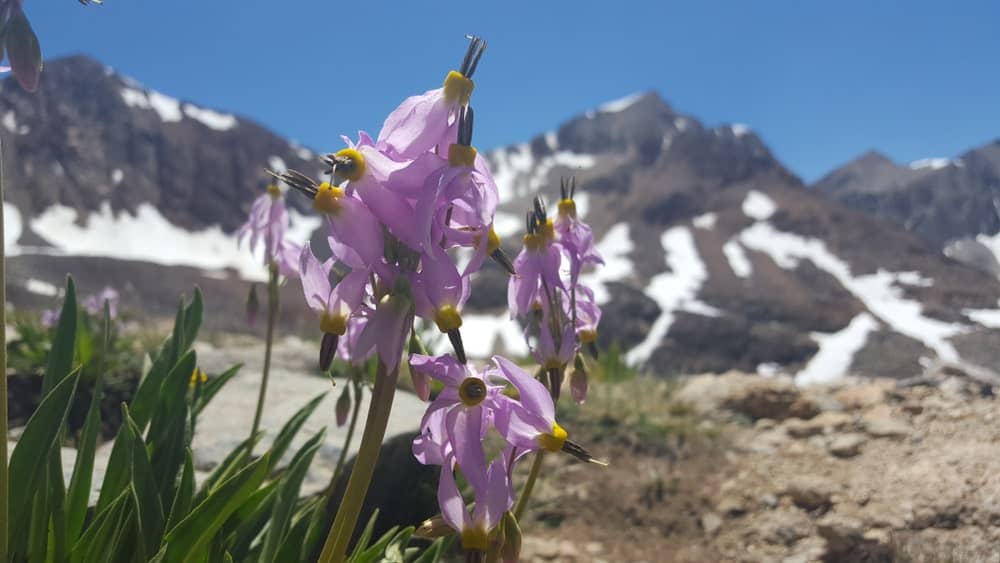 The flowering plant boasts basal clumps of leaves with nodding flowers. Each of these flowers is up to a foot tall from the stem. The most noticeable quality about Padre’s shooting star is its magenta to deep lavender flowers. This floral species are often hybridized with Dodecatheon hendersonii, from which it can be differentiated through its green stem.

This is one of the first wildflowers that grow in the spring and stays abloom until winters. In summers, these small perennials go dormant. However, all those people that love to see their gardens alive for most of the year should consider growing Padre’s shooting stars. It is interesting to observe that Dodecatheon clevelandii’s foliage is silver in color while the flower is soft pink.

This flower species is best grown in shade or partially shaded slopes that tend to face toward the north side. While it is normal for the plant to boast a pink color, an occasional plant produces elegant white flowers. On rainy days, this species is produced in abundance on large green patches. 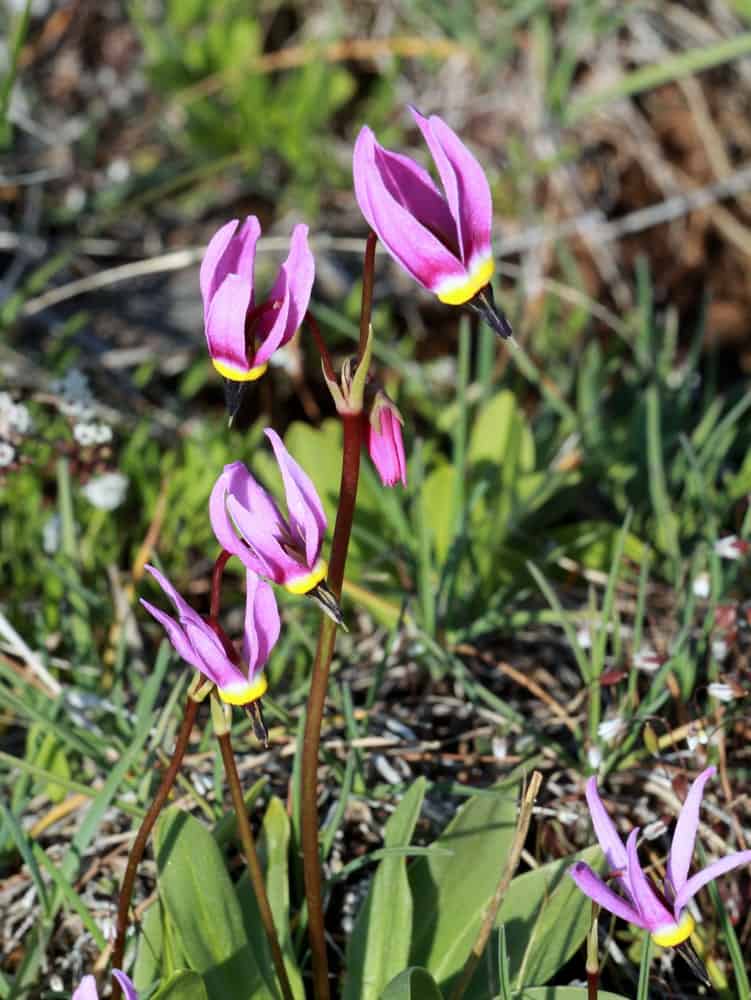 Classified as Primula conjugens, Dodecatheon conjugens is a flowering plant that also goes by the name Bonneville shooting stars. This perennial species is native to western North America, including northeastern California, the Pacific Northwest, the Great Basin, and eastern Wyoming.

The flower petals rock a pink or white color, often magenta which eventually turns white. The leaves spread in an erect position, outward to upward. Usually egg-shaped, these showy flowers bloom from April to July. Unlike other shooting star species, this perennial plant produces a fruit (circumscissile). This plant also holds special value to bumblebee species as they feed on the plant’s nectar, using their hairy tongues. In other words, Bonneville shooting stars play a key role in pollination. 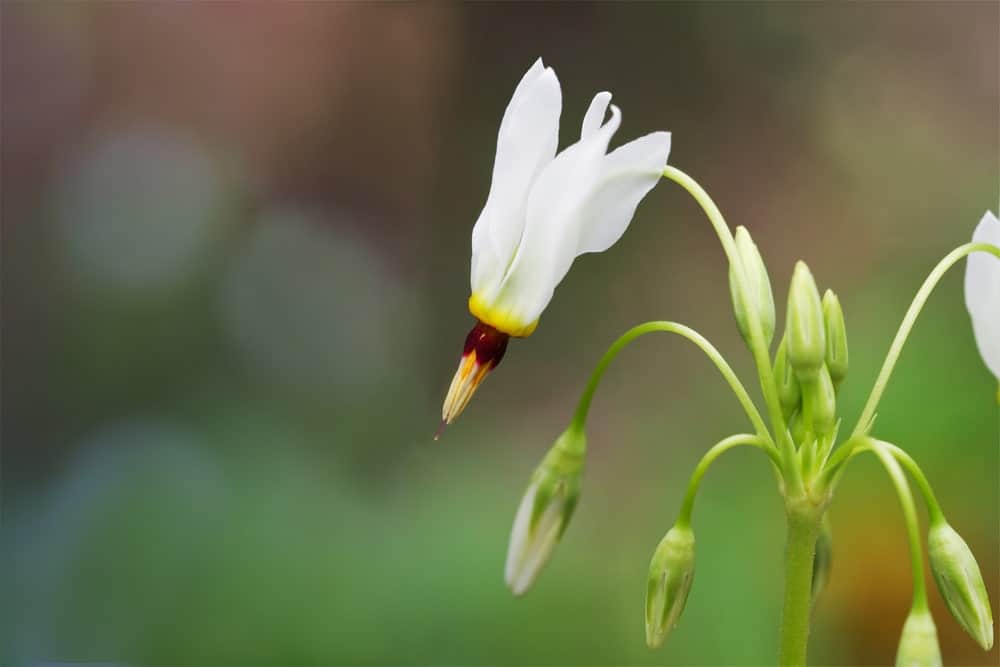 Having the botanical name Dodecatheon dentatum, the white shooting flower comes with toothed leaves. This means that the leaves have oval blades with wavy edges. Each of these leaves develops a long petiole as the plant grows. The inflorescence consists of 1 to 12 flowers with five white lobes and red anthers. These anthers contain pollen that is sucked up by pollinators.

White shooting stars are divided into several subspecies that can be cultivated like a beautiful ornamental plant in both modern and traditional gardens. This perennial plant has won the Royal Horticultural Society’s Award of Garden Merit – all the more reason to invest in it! 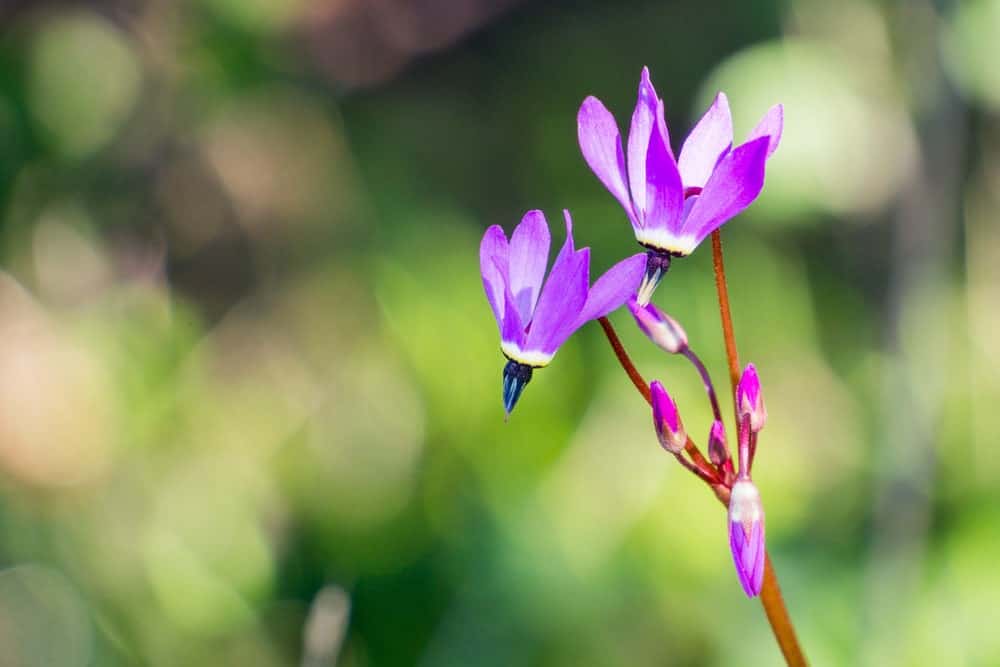 As the name implies, this perennial produces thick oval-shaped leaves at the base of the plant. The showy flowers bloom in early spring and grow up to 12 inches long. It boasts flowers with petals ranging from magenta to lavender to white. Typically, the plant blooms in the summer season, from February to May.

In order to grow this plant, you will need full sun to partial shade and well-drained soil. For the desired result, you will also need to ensure that the drainage system is up to par. 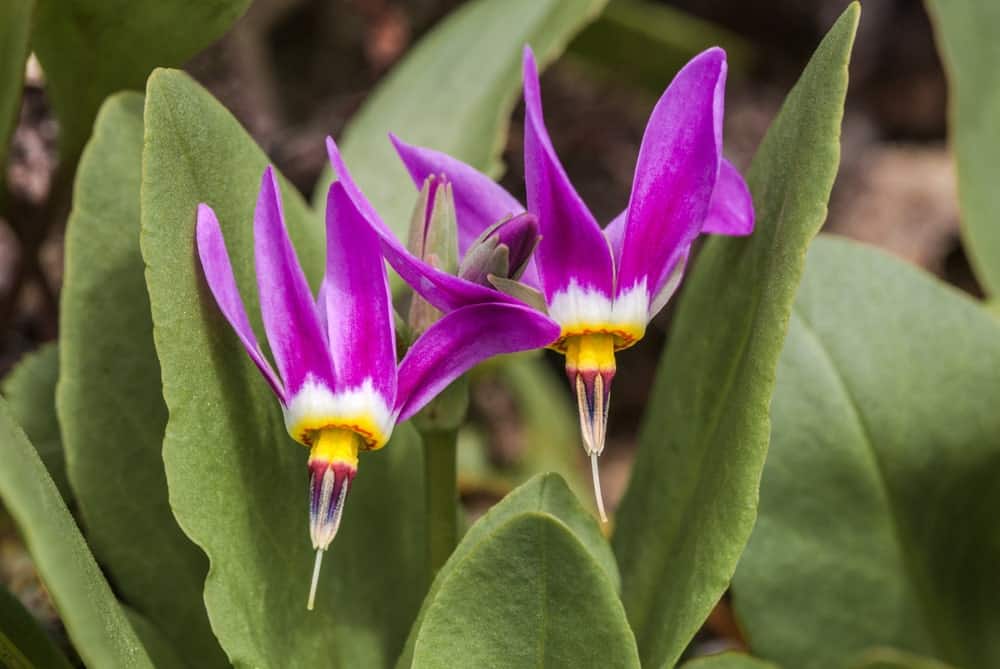 Like all shooting stars, this spring delight thrives in moist soils and tolerates light as well as shade. This beautiful member of the Primrose family attracts early pollinators such as bumblebees that engage in buzz pollination. The spring flower plant produces five-petaled blossoms in hues such as deep pink, red-violet, or sometimes, pale white.

Found usually in alpine meadows and stream banks, this partially wrinkled flower blooms in August in some parts of the region. 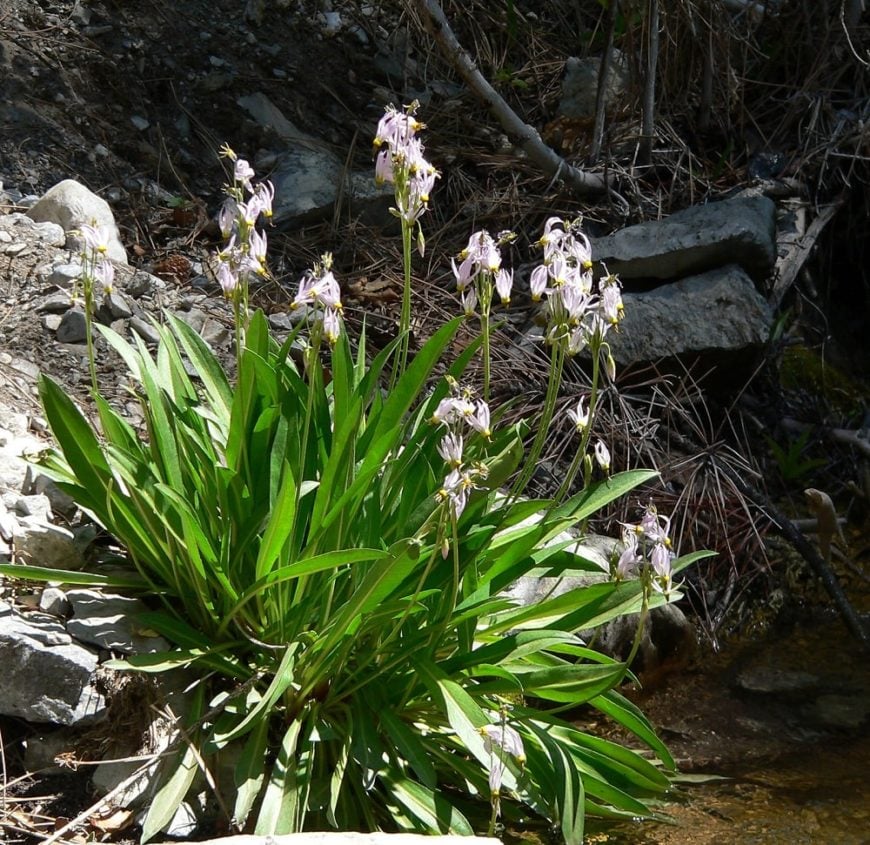 Also known as Dodecatheon redolens, scented shooting stars are hairy-rooted perennials that consist of long, clumpy leaves around their base. They also produce tall, slender stems that are deeper in color and inflorescences of 5 to 10 flowers. Each flower has a pointy mouth that faces toward the ground. With time, the showy flower that boasts colors like pink, white, or lavender becomes erect.

Note that each sepal base comes with a bright yellow blotch and is wrapped into a thick lip near the mouth of the flower. 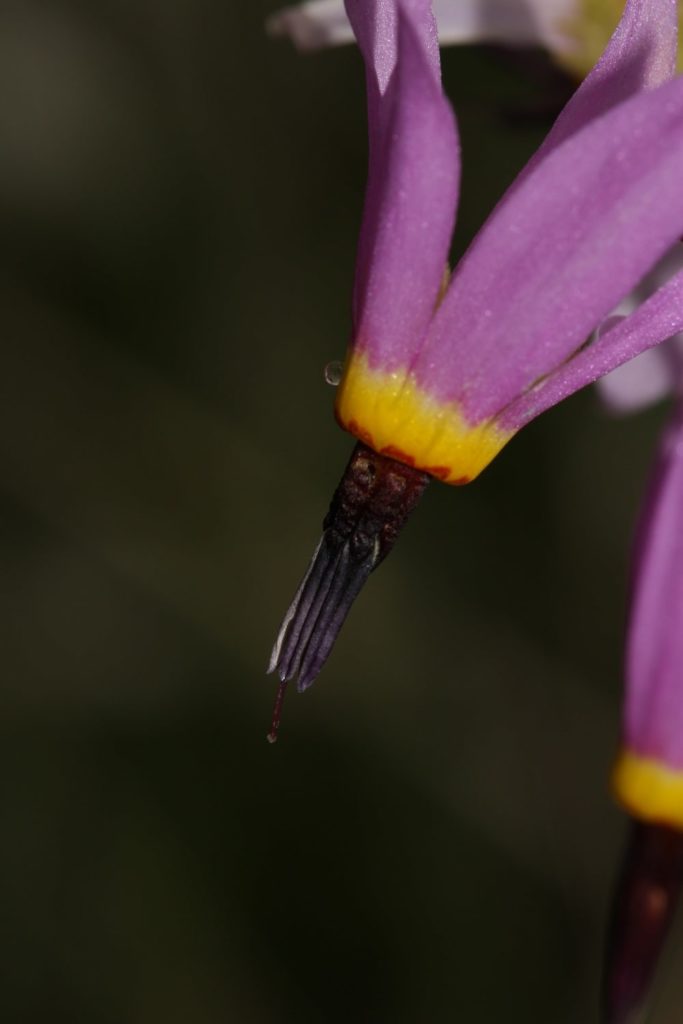 This flower species is scientifically known as Dodecatheon poeticum, and it is native to the states of Washington and Oregon in western North America. Also known as Narcissus shooting star, Dodecatheon poeticum consists of an herbaceous flower, basal-clumped leaves, and tall stems.

Poet’s shooting stars were first discovered by Dr. Louis F. Henderson of the University of Oregon in 1930. These plants shortly came into the limelight after Dodecatheon dentatum – a flower species of the same genus – was identified by botanists.

This dicot plant features bright pink to intense lavender flowers and is usually located along wet regions such as bogs, streamsides, and open woodlands. This flower species is known to be pest and disease-free. In order to grow this plant, you will need an open space as the plant has the ability to spread and colonize the land. 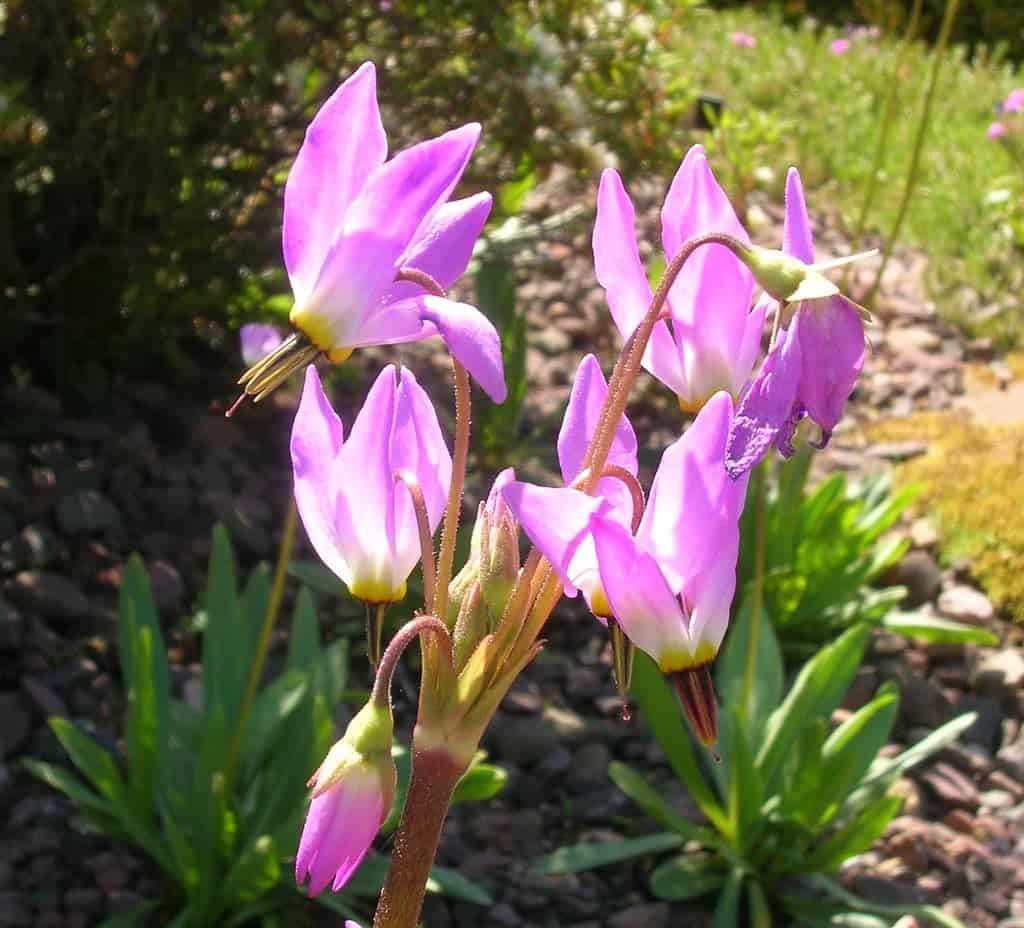 Native to California, the Sierra shooting star is a popular species that is also known by its botanical name – Dodecatheon jeffreyi and common names – Jeffrey’s shooting star and tall mountain shooting star. This flowering plant was named after its discoverer, John Jeffery, who was a famous botanist of his time. He discovered this astonishing plant near California’s Mount Shasta in 1852. This wildflower springs up in stream banks and mountain meadows with thick-rooted perennial leaves with a wrinkled base.

Like scented shooting stars, Sierra shooting stars produce tall and thin stems that are intense in color. These stems are topped with inflorescences of 3 to 18 showy flowers that point toward the ground. Another remarkable feature of these plants is their sepals that appear in colors like white, pink, and lavender.

In ancient times, the Sierra shooting star was a symbol of good luck for the Nlakapamuk people (also known as the Thompson River people). They used to flaunt these flowers as amulets and love charms. 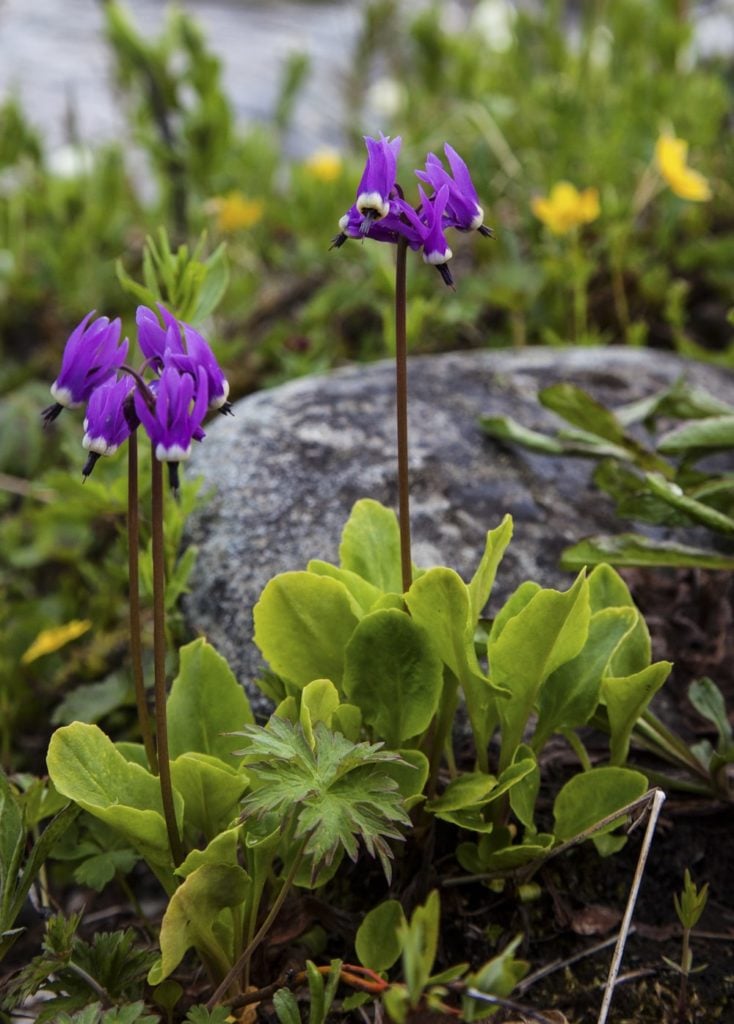 Also identified as Dodecatheon frigidum, western arctic shooting stars are native to the northwestern part of North America and Asiatic Russia. As the name implies, this purple-colored flower plant is found in arctic and subarctic regions.

It has also been discovered in parts of Alaska, Yukon, British Columbia, and northern Saskatchewan. In these areas, this flowering species is found in wet areas like bogs, lakeshores, wet meadows, and riverbanks. Interestingly, it has also been reported to be produced on melting snow.

If you are interested in growing shooting stars, you will need to have a mild temperature, partial sun, and moist soil for the plant’s proper growth. While they may wither in summers, these short-lived perennials will reappear in the spring season. Shooting star plants do not require supplemental fertilizers, so avoid giving them a supplemental source of nitrogen. Plant their seeds in the fall and see them flower by summer!

Home Expert (Bot)
Hello, how are you? Ask me anything about interior design, home improvement, home decor, real estate, gardening and furniture.
47 shares