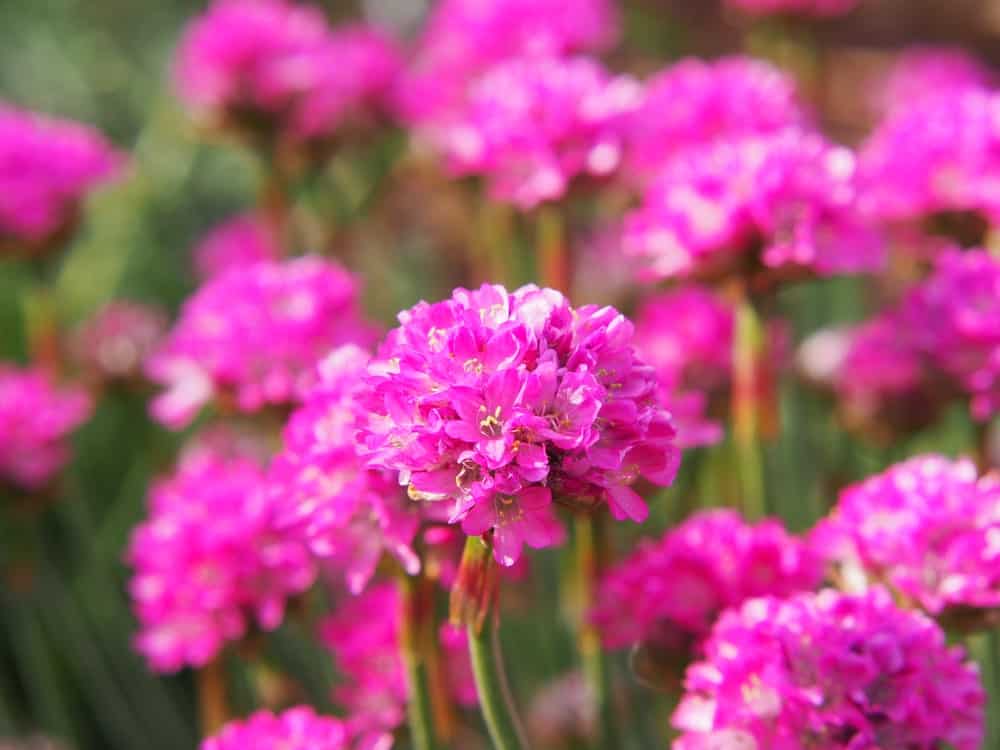 Armeria maritima, that is commonly referred to as the Sea Thrift flower in common terms, is a species of the flowering plant. These plants hail from the family Plumbaginaceae. This lovely flower-adorned plant is a compact perennial, which means that they occur in bunches. Whether purple or white or red, the flower is popular in gardens, cultivated worldwide as a garden and cut flower, especially for places designed as xeriscapes or rock gardens.

The beauty of these flowers has not only made them a nice ornamental addition to lawns but has also given them a place in popular culture. Did you know that the British threepence coin in the mid 20th century had the design of the thrift in reverse? There is plenty more to learn!

Sea thrift, as its name suggests, lives close to coastal areas where it thrives in sandy, saline conditions. The hardy flower can also take over mountain rocks. Here is everything that is known about the sea thrift flower- including its many types.

The plant has long stems that support globular bunches of bright pink or purplish flowers. Some subspecies have a red or white-colored inflorescence as well. The plant grows up to be about 6-12 inches tall.

All plants are members of Kingdom Plantae. Furthermore, according to the prescribed method of the classification of all living being, all species are subdivided into class, order, family, genus, and finally, species. Here is the categorization of the Armeria maritima:

The flowers bloom in full speed during mid to late spring but there can be additional sporadic flowering throughout summer months. The bottom part of the Sea Thrift forms a dense, mounded tuft of grass-like, dark green leaves that spread gradually. The plant is super easy to grow and is ornamental enough for edging walks and borders. 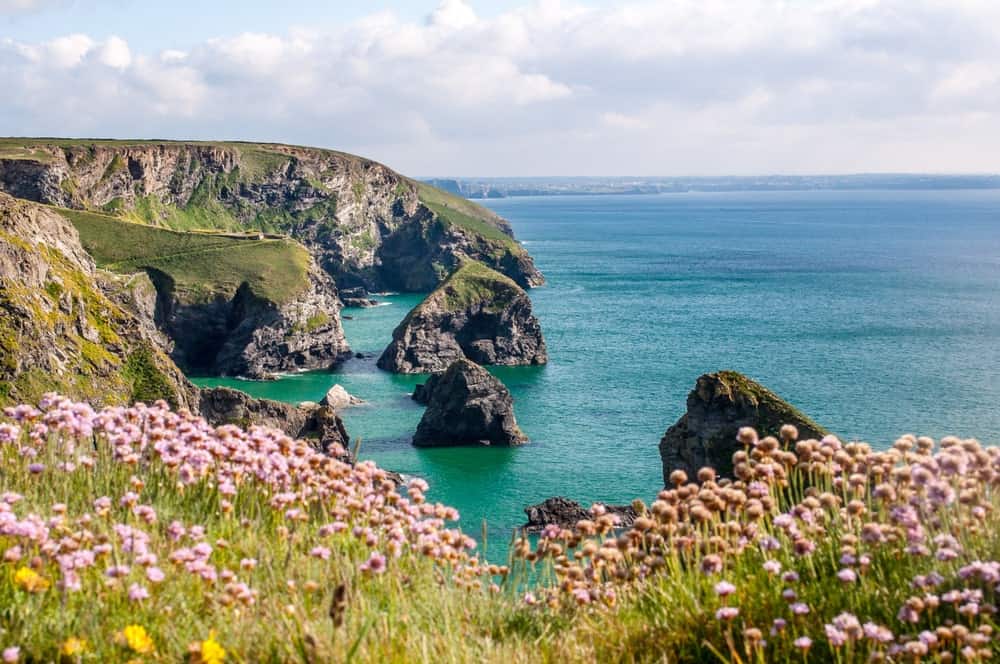 The distribution of this flower is what scientists call circumpolar. It can be found occurring in the wild near and in coastal areas across the Northern Hemisphere, while you can also find it growing in parts of South America.

From dry, saline, sandy conditions as are found in coastal areas, Sea Thrift can adapt and grow in grasslands and salty marshes to inland mountain rocks and salted roadsides; the species’ middle name is perseverance.

Another interesting quality the plant possesses is its very high copper tolerability. It is able to grow in soils with copper concentrations of over 6400 mg/kg! Some speculate that this is because of a mechanism in the plant that does not let zinc get absorbed or rise up through the stem and leaves, and some point towards the long stem as the reason.

As the atmospheric carbon dioxide concentrations change depending on the location, it is observed that the metabolism of the plant is altered.

Other Features of the Plant

The plant, although best in full sun, can be grown in partial sun as well. While it grows excellently in infertile, dry, well-drained soils, richer soil gives its leaves a tendency to fall outwards and leave an open center.

It is also resistant to drought, and virtually disease and pest free- all of these features make it easy to plant and a great, low maintenance option for your garden. 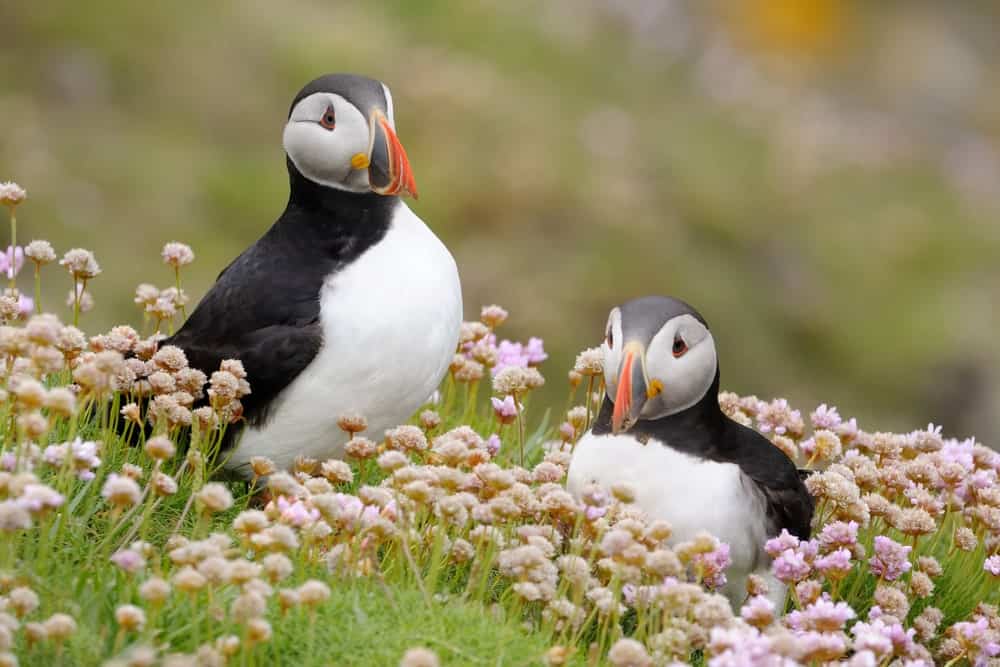 Whenever learning about a new plant species, it is fascinating to note how it interacts with the environment and with the other species found around or near it. In this case, pollination occurs in the sea thrift flower by various insects such as bees and Lepidoptera.

Being a popular species in the UK, Armeria does not need much preservation efforts by itself. However, there are several subspecies found in England, including some named elongata, which have a vulnerable status on the conservation list. It has been termed the species of principal importance for biodiversity preservation.

Besides appearing on the threepence coin as mentioned before, the plant conservation charity Plantlife chose the sea thrift is the face of their 2002 marketing campaign.

In the Language of Flowers, the Sea Thrift stands for sympathy- best for an ailing loved one in the hospital if you live close to their habitat.

Some subspecies have been known as medicines to treat epilepsy and obesity; it is also used as a sedative.

Other than the various subspecies of Armeria that occur in nature, there are multiple cultivars, designed especially keeping their aesthetic and their maintenance level in mind, can also be found and bought. Here are some of the available cultivars you can choose. 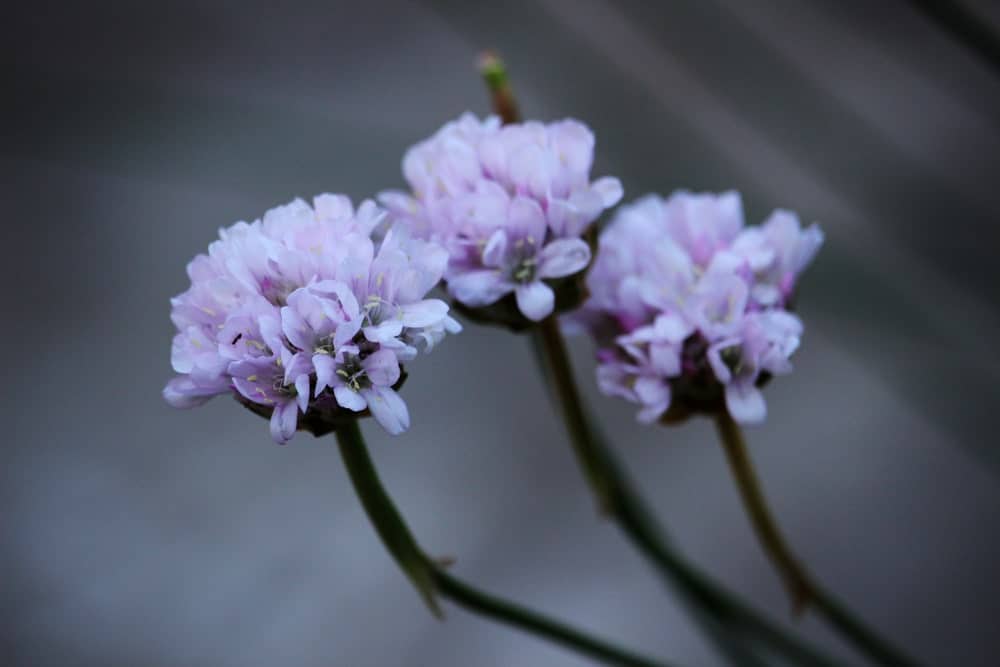 If you are looking to avoid the tall stalks that come with the plant. Alba is the one to go for. This cultivar is relatively smaller than the species (grows about 5 inches high and wide). Moreover, it has white flowers instead of the usual purple. If they sound like more your style, go for them!

The trademark Armada rose variety blooms bright rose-pink flowers on 6-8 inch high stems. If pink is too out there for you, you can also go for a white cultivar in the same series.

As implied by its name, the bloodstone variety cultivar has bright deep pink, almost red, flowers that can be used for ornamentation and in rock gardens.

The cottontail is another short cultivar of the species with white flowers and a height of about 6 inches.

The aptly named Dusseldorf Pride is a German variant that has deep pink to wine-red flowers. The plant itself is short at 4-5 inches tall, and usually repeats flowers in the fall so you can experience twice the beauty!

This variety has darker green foliage of leaves and bright pink flowers that bloom and wither intermittently.

This especially British selection has what is called variegated foliage. This means that a white stripe runs down the edge of each leaf of the plant!

Rubifolia sports magenta-pink flowers and, instead of green, has dark burgundy foliage presenting in the shape of a mound 4 inches high and 6 inches wide. As summer rains down its heat on them, the leaves change color and become greener.

The Splendens Sea Thrift sports masses of beautiful globes of rose flowers at the end of its stems. It has small and glossy leaves that are grass-like, and remain emerald green in color throughout the year. Ornamentally, this variety is often preferred because of its unique aesthetic.

This one is a low growing cultivar used as a flowering groundcover. This is an especially hardy variety with reddish-purple flowers. 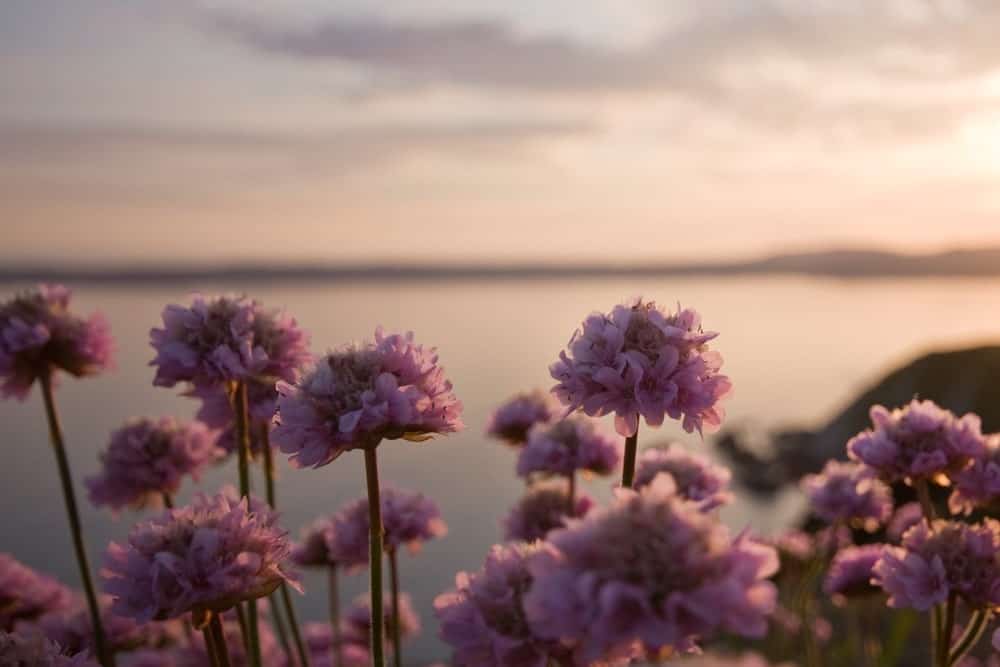 The species is home to five different subspecies that occur naturally in the wild. Some main characteristics between subspecies are similar, while the presence or absence of a few others creates the differences between them. Here is an overview of all the subspecies of the Sea Thrift flowering perennial. 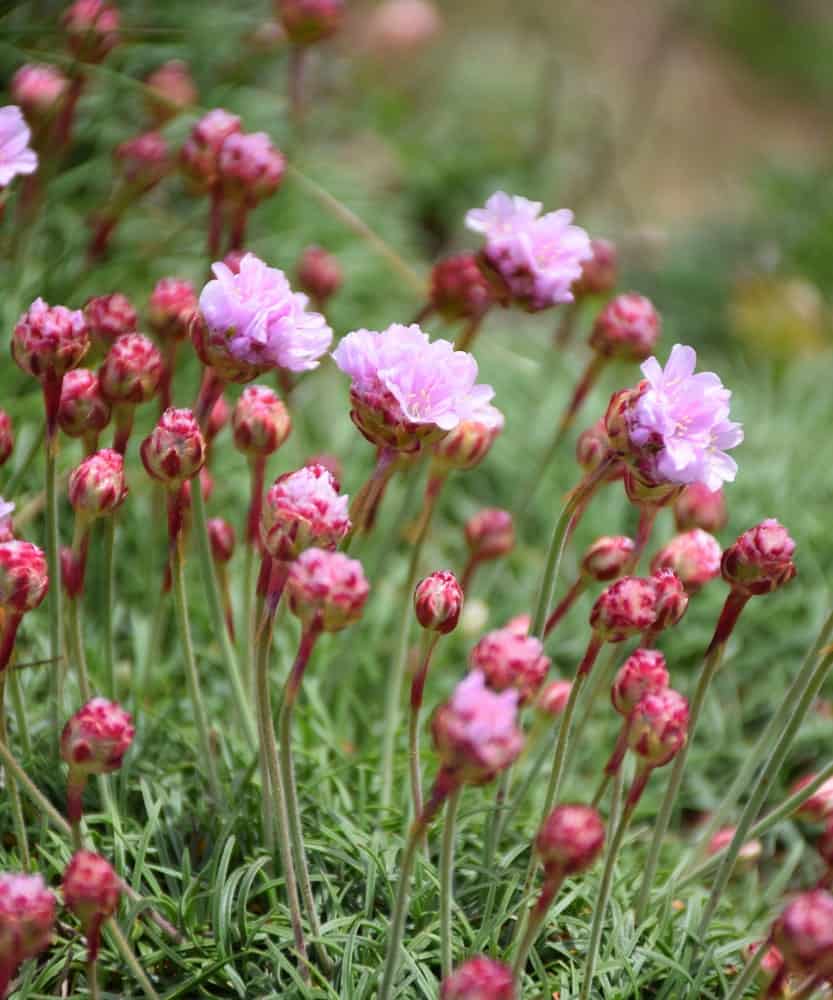 Also known as the California sea pink, the subspecies californica iss a dicot that is native, and limited, to California as its name suggests. It evolved specially catering to the changing environment in its surroundings and slowly became another subspecies.

Californicus is usually found in arid conditions along the Northern Coastal Scrub and the Closed-cone Pine Forest. Its blooming period is from May to June- the main summer months. 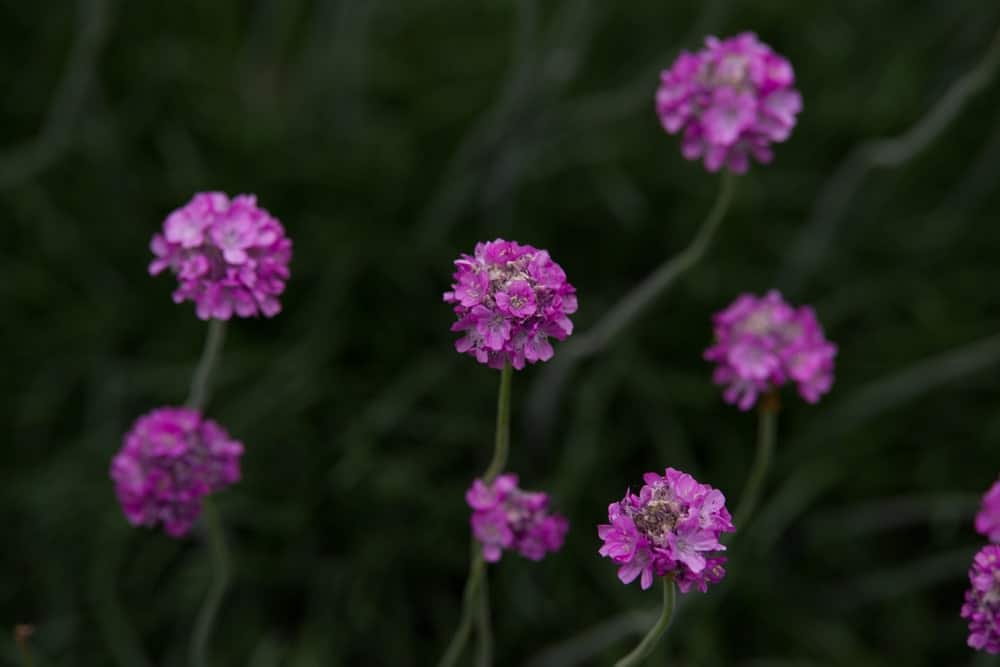 This perennial herb is found widely in neutral grasslands often overlying river gravels or alluvium. Back in the 1950s, elongate was recorded in at least 12 different localities in Lincolnshire, but now only to populations are still extant. Others were lost due to human activity in the regions, namely ploughing, re-seeding and other agricultural pursuits.

This particular species is designated a vulnerable status in the conservation list. Some organizations working for its reinstatement and protection are the Botanical Society of Britain and Ireland, Biological Records Center, and the Center for Ecology and Hydrology amongst others.

Also known as the Interior SeaPink 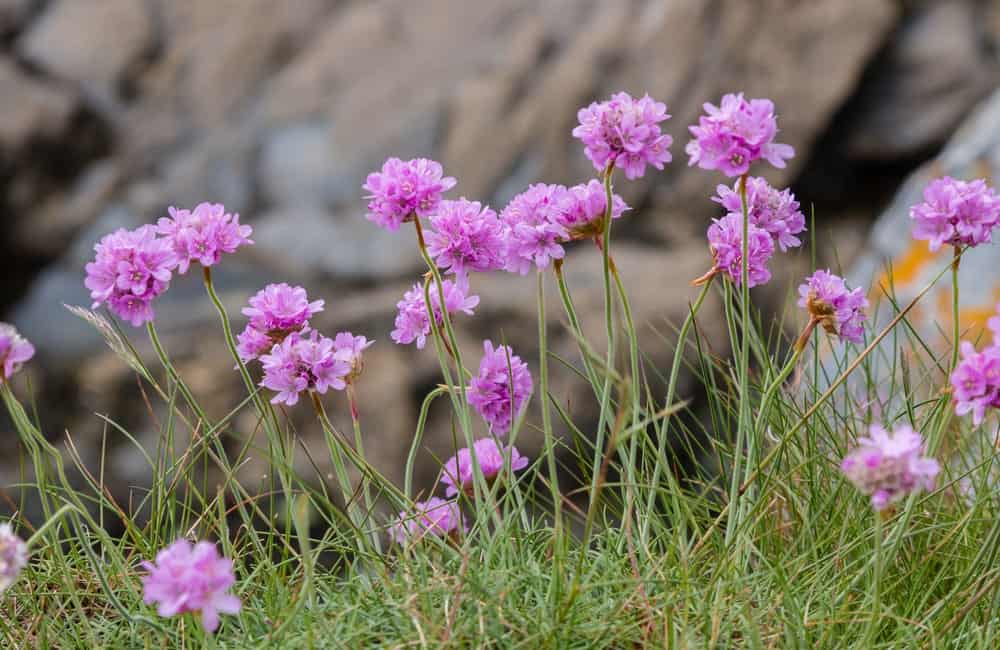 On the coastal cliffs of Cornwall, you can see lines upon lines of blooming sea thrift flowers that add equal parts aesthetics and melancholia to the bleak rocky walls. These flowers bloom from a perennial herb that has grassy leaves to preserve water loss, and high adaptability to dry and arid soil. If the soil is well-drained enough near the sea at a similar habitat, you will find these flowers growing there unapologetically.

The grass-like leaves of this compact, slow-growing plant will spread gradually to 8-12 inches wide. The flowers can range from bright purple to subtle lavender in shade. It is native to mountains and mainly temperate regions. 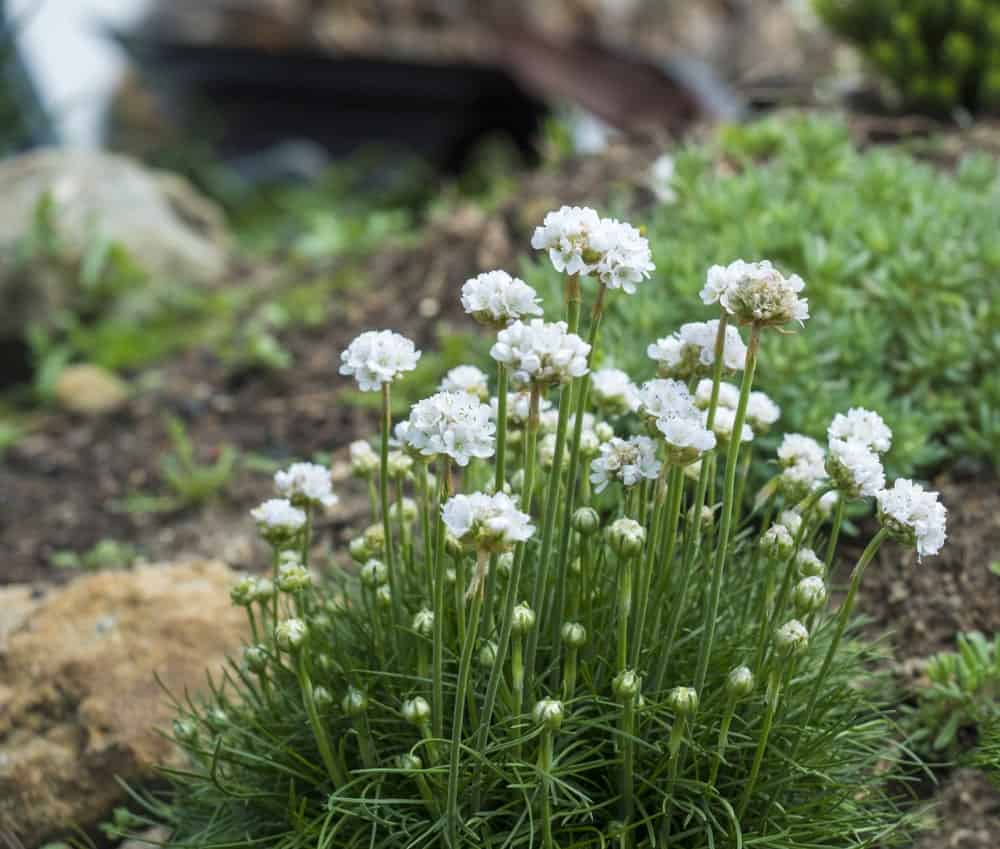 All subspecies of the Armeria maritima are found near the ocean; either seen on coastal rocks or close-by. Similar is the case with this subspecies called subrica. The sibrica is a pale variety of the ‘sea pink’ flower, found in dry stony places, heaths, and alpine meadows.

The plant has a pot size of 9 cm, while its width and height are 25 cm and 15 cm respectively. It usually flowers in summer months when they face open and sunny positions in well-drained soil.

How to Grow Sea Thrift Flowers

As mentioned earlier, these plants prefer well-drained soil in full sun in parts of the North. Sandy is usually the best kind of soil for these plants- it does not even need to be overly fertile. Wet soil or one that is too fertile may cause rot in the plant.

Taking care to not overwater is essential when growing these blossoms. It must also be established that the garden or place of a plantation is not at a place that has too much foot traffic.

Once established, it is not much you have to do to make sure your babies keep on living; just make sure you are in an area close to the coast. If the conditions are right, there is no need to worry about the plants flowering!

If the plant is not readily available to buy in your area, you will be pleased to know that Sea Thrift is easily propagated from seed, generally leading to a flower-filled second year. Sow the seeds in spring or fall. In other months, it can also be propagated vegetatively by division in spring or basal cuttings.

Whether one of the commonly found species or that with a vulnerable status, whether a purple or white cultivar, there is no question that Sea Thrift flowers look absolutely majestic swaying in the wind along beaches, coasts, and cliffs overlooking the sea. Their bright, eye-catching colors immediately bring them to a viewer’s attention, simultaneously looking beautiful and melancholy.

Even if you are doubtful as to whether you have a green thumb, the Sea Thrift is a great place to begin your gardening journey. It is ridiculously easy to plant, which makes it a simple but gratifying experience.

Get ready to line your rocky garden with these beauties!