The screwdriver is the most commonly used household tool with a very simple design and function. However, it comes in many variations of the tip and blades. Read on to find out what screwdrivers will suit you the most.

The screwdriver is the most commonly used household tool and one of the first home improvement instruments to which children are introduced. Although this tool has a very simple design and function, choosing the ideal screwdriver for a home improvement job can be a bit of a chore, because screwdrivers come in dozens of varieties. We’ve provided a list of the different screwdrivers by type and style.

The origin of screwdrivers dates back to a century when these tools were created in order to tighten newly-invented screws in engines of war and suits of armor. The screws of that time were a sharp threaded needle with a slot cut in the head for tightening. As screws evolved, so did screwdrivers. This is because without the right screwdriver head, it would be virtually impossible to remove a specific type of screw.

However, not many things have changed about the screwdriver since the Middle Ages and the only innovations in the past several centuries have been in the material used and the shape of the drives and the handle designs. Despite this (or maybe, because of this) the screwdriver remains one of the most important tools in the manufacturing and home improvement industry, click here for details.

Here’s everything you need to know about screwdrivers:

Most of us have heard of a few different types of screwdrivers but in reality, there is a wide range, containing dozens of different versions of drives, to choose from. Here are some of the most used types: 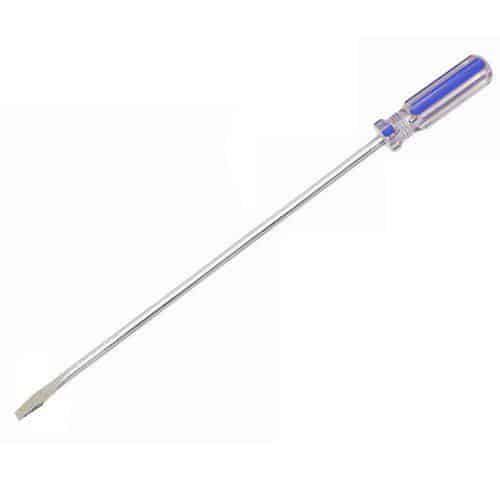 These blades are flat-planed and come in different sizes to accommodate screws of the same varied sizes. The most common two sizes are the 5.5 mm and the 8 mm screwdriver. They are the two types of screwdrivers found most often in home tool kits. The slotted screwdriver also allowed for the invention of many different screwdrivers.

High quality slotted screwdrivers have almost parallel tapered tips that help to grip the slot of a slotted screw tightly and prevent slippage. Care must be applied when using this type of screwdriver, as hard pressure can cause the screwdriver to slip and scratch the surface of the material or embed itself in the user’s hand.

Cabinetmakers prefer to use slotted screws, as they take pride in aligning the slots. This makes their work look impeccably neat.

There are two main categories of slotted screwdrivers: 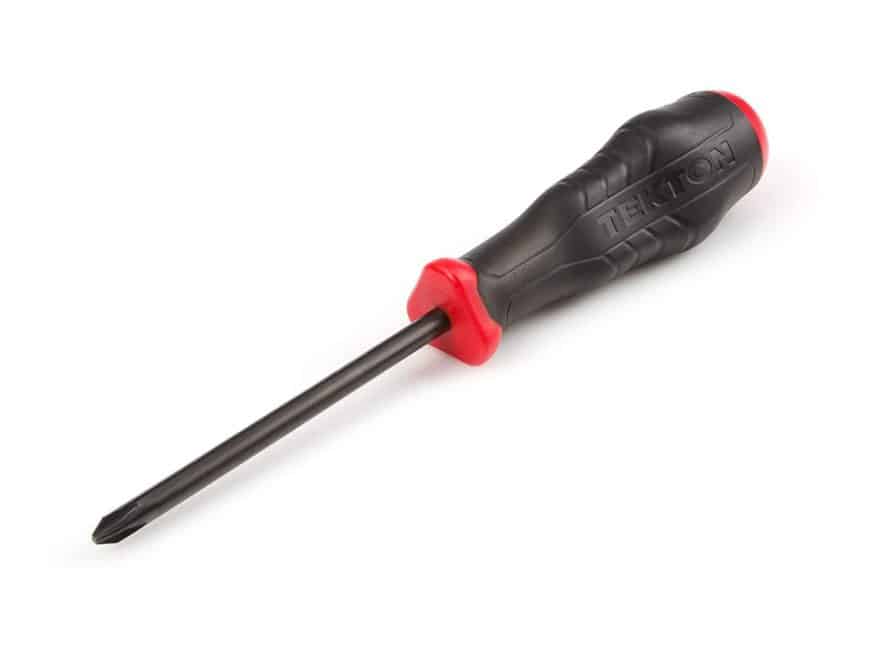 The Phillips screwdriver is also known as a crosshead screwdriver because of its cruciform head. However, in superior quality Phillips head screwdrivers, the tip is somewhat rounded. These screwdrivers are made to fit into screw heads which are made in the West and do not have sharp tips like slotted screws. 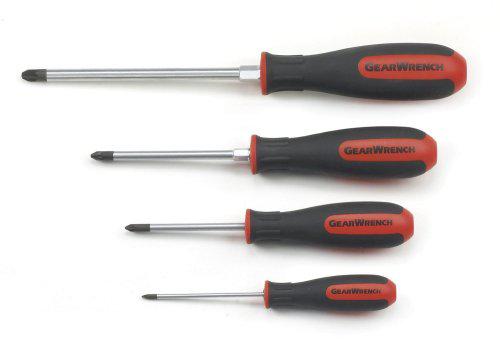 The Pozidriv screwdriver is considered to be an upgraded version of the Phillips screwdriver. It was created to reduce the risk of the drives camming out when high pressure is applied to them.

The Pozidriv screwdriver is characterized by four shallow lines radiating from the center. Its tip is smaller and blunter than that of Phillips screwdriver, and contains ribs among the blades. This increases contact with the screw head, which means more turning force can be applied without the danger of the screwdriver slipping out.

The Pozidriv screw and screwdriver system is incredibly efficient. It is also less likely to break the screw head or the tip of the screwdriver when the correct pressure is applied. These screwdrivers usually come in sizes from one to three. 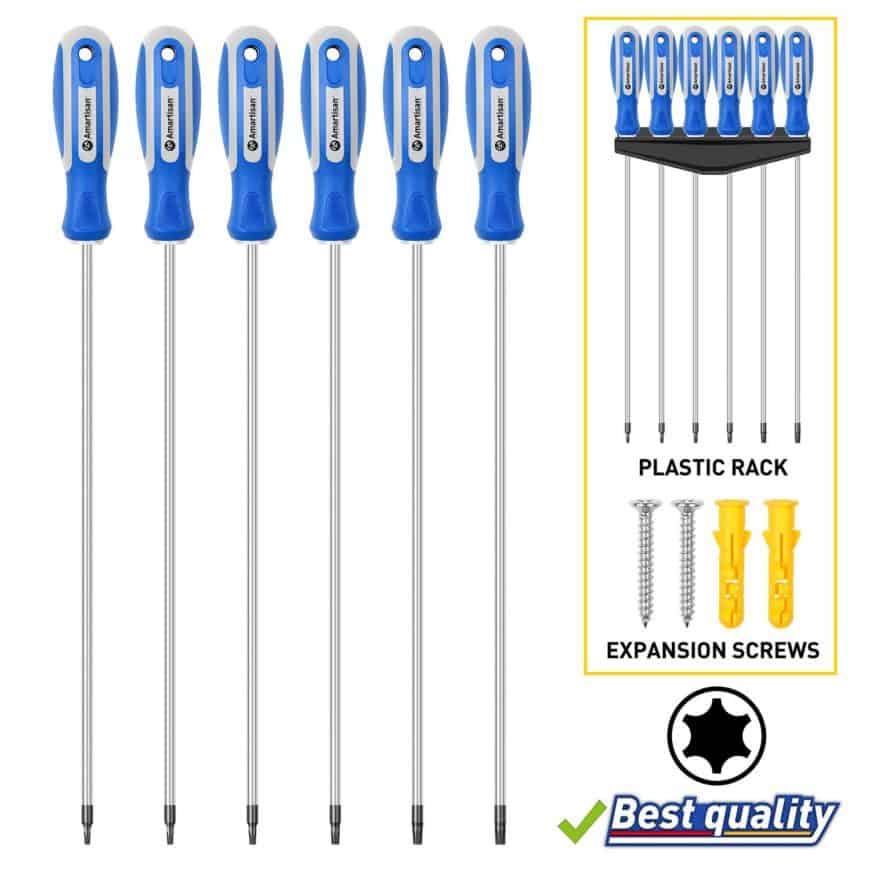 The Torx screwdriver is a trademarked screwdriver. These types of screwdrivers were once popular in the security and manufacturing field, but have now become widely used in commercial fields as well.

This screwdriver features a blade shaped in the form of a recessed six-pointed star, but with rounded off sharp angles. This blade shape increases the contact area between the screwdriver tip and the screw head, and provides improved torque. Because of this, the Torx screwdriver can withstand maximum torque and does not easily slip out of the screw or break.

Torx screwdrivers come in sizes ranging from 0.03 inches to 0.81’ inches. They are designated using numbers from T1 to T100. The most common sizes used in building range from size T15 to size T25. 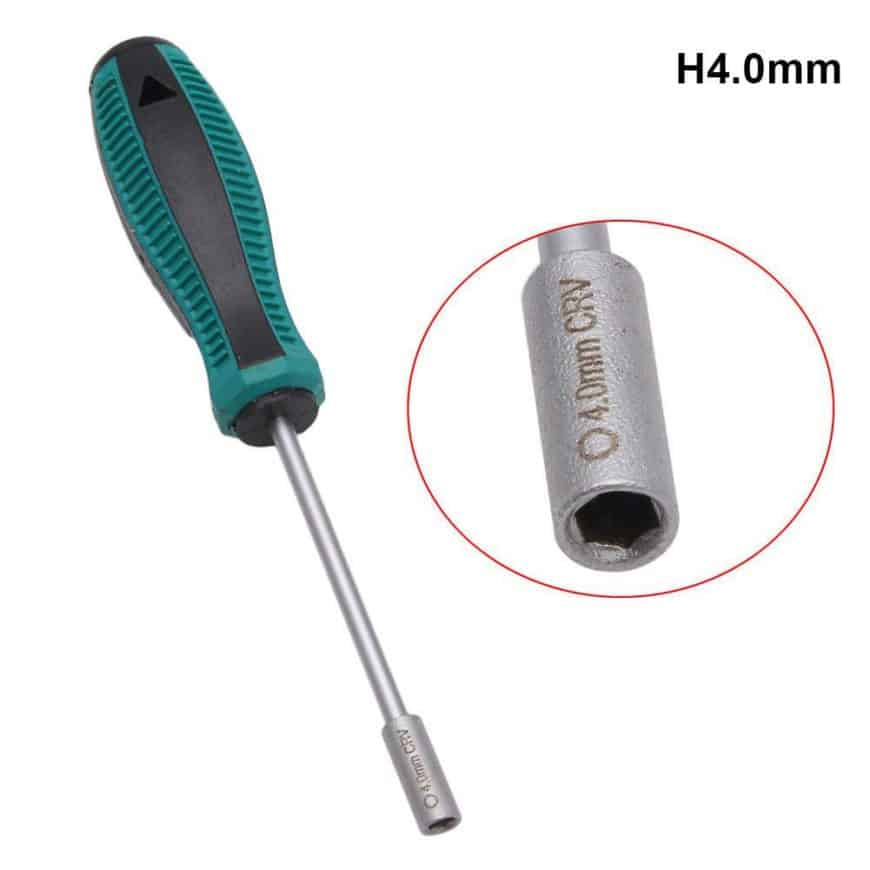 The most common use of hex screwdrivers is in bicycle maintenance, as well as in assembling furniture. However, using a tw0-handle Allen wrench is a better choice when completing these tasks, because the two-handle Allen wrench offers higher torque application than what comes with a narrow screwdriver handle. 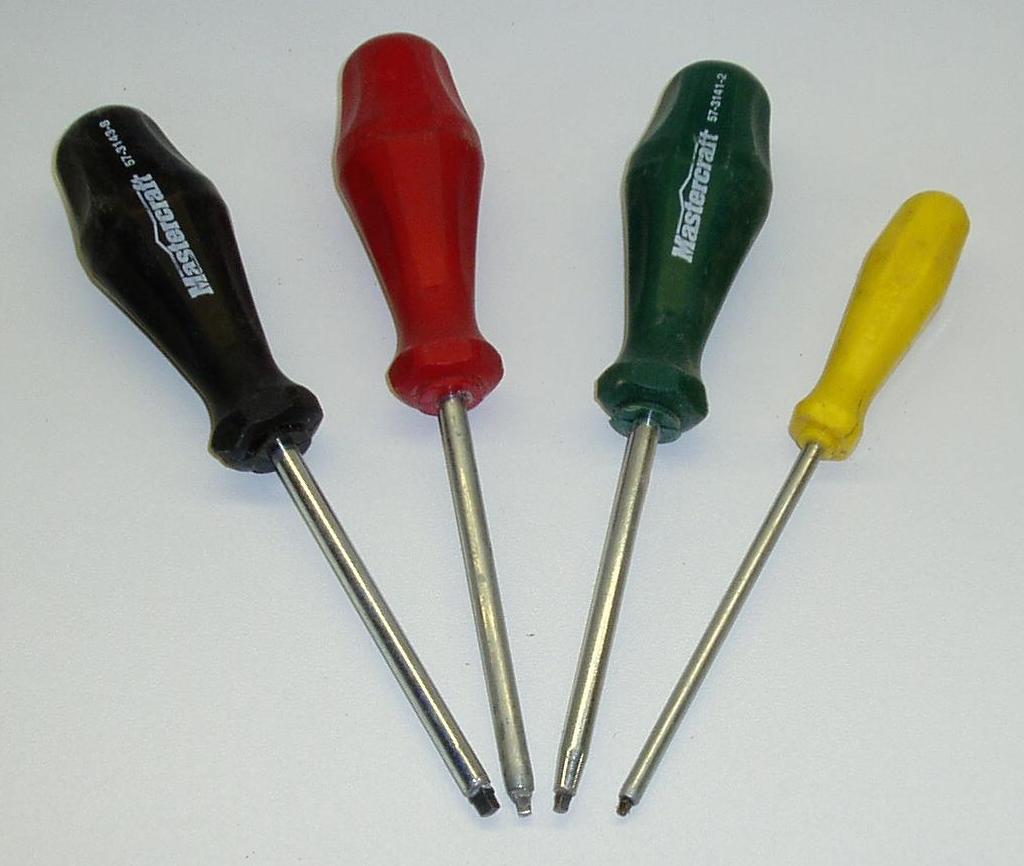 This type of screwdriver is most commonly used in the furniture and automotive industry due to its durability. Although not found in basic home tool kits, Robertson screwdrivers are often included in comprehensive screwdriver sets.

The tip of a Tri-wing screwdriver somewhat resembles a pinwheel. This screwdriver type is used to work screws that have triangular sockets with three wing extensions. Since these screws have such a unique slot, they are impossible to remove without a tri-wing screwdriver.

These screwdrivers were first manufactured to be used in aerospace engineering, but are now easily found used in home electronics. Tri-wing screwdrivers are expensive and not as easily available as other types of screwdrivers. However, their biggest benefit is that the can tighten to extremely high torque values.

Tri-wing drivers come in sizes ranging from one to three. 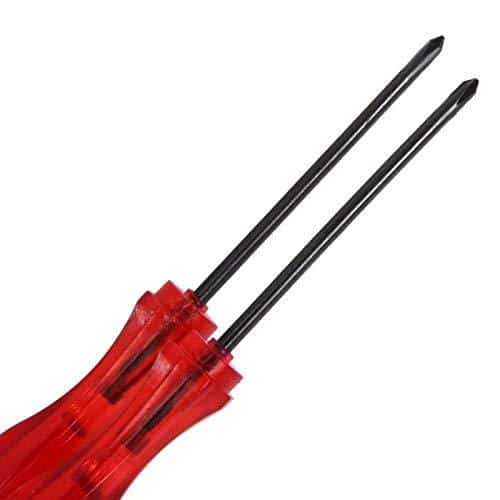 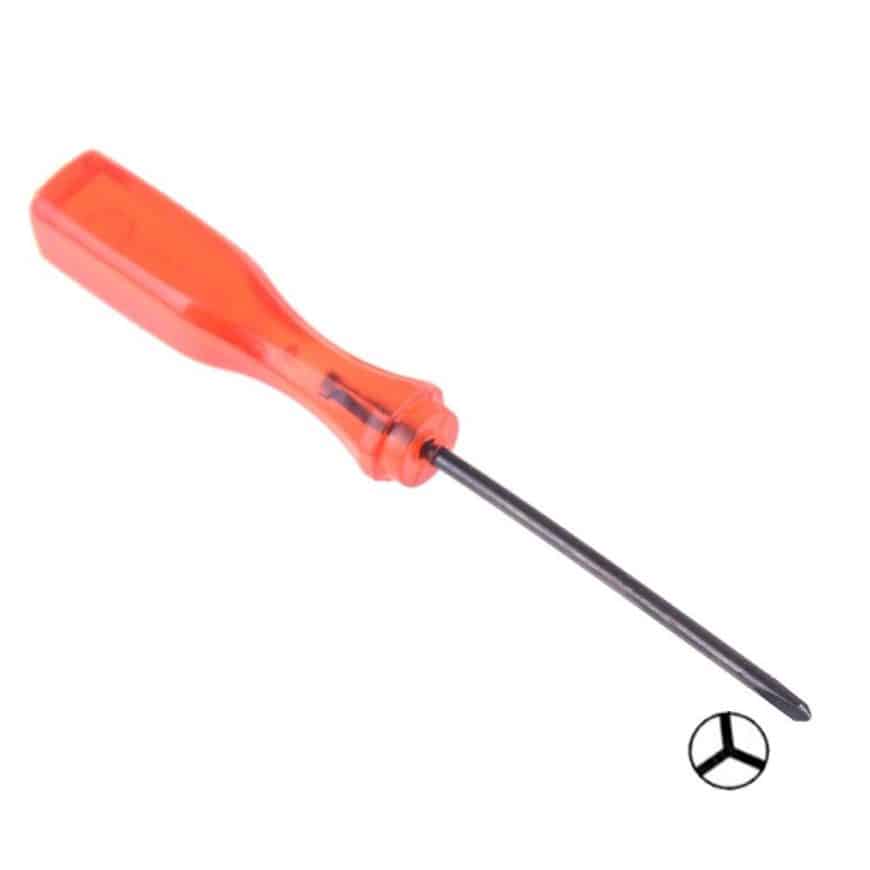 Also known as three-prong or Y-tip drivers, the tri-point driver features a tip with three blades set at 120-degree angles, making a Y shape. The screws made to work with these screwdrivers are quite popular in the electronic industry. Tech giants like Nintendo and Apple use them in their phones, gaming systems, and other devices. 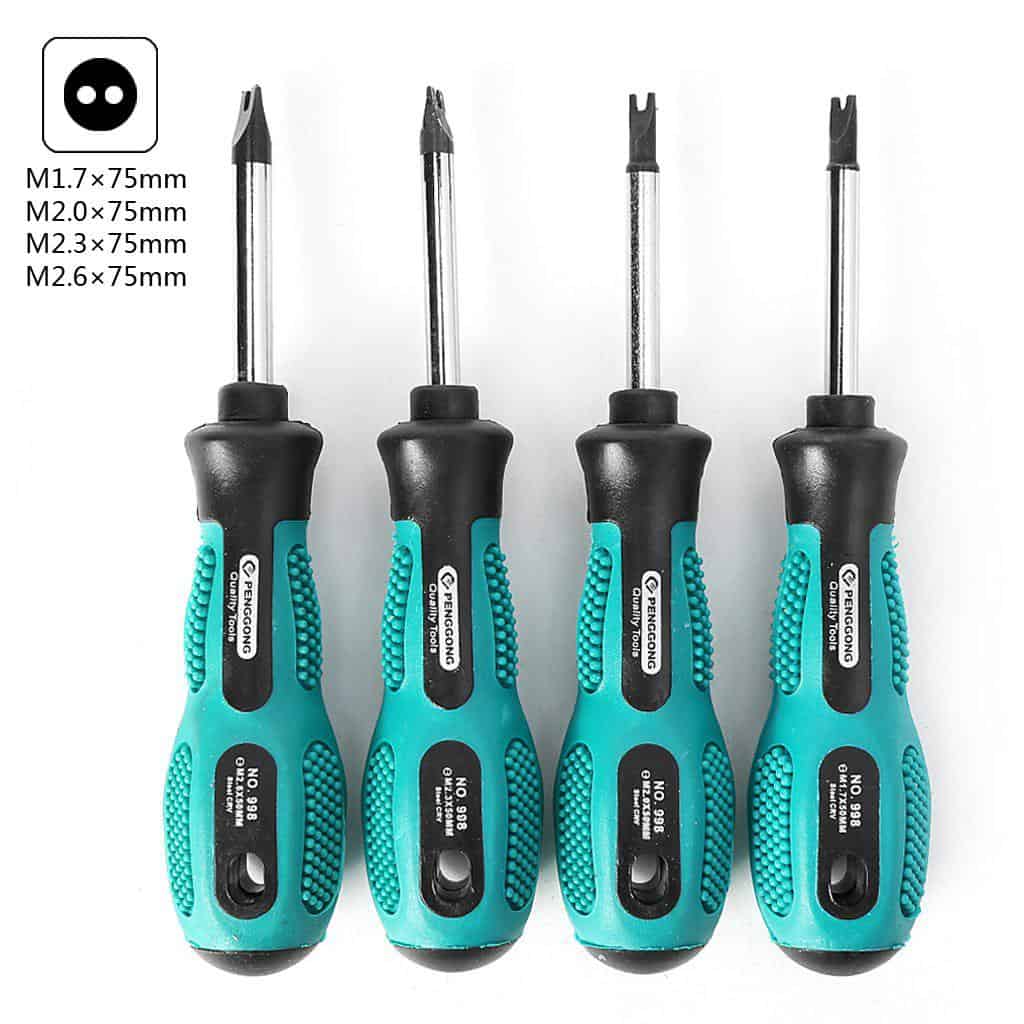 Not to be confused with the British term for a wrench, the spanner is also known as the Snake-Eyes screwdriver, pig-nose screwdriver, and drilled head screwdriver. These strange screwdrivers are equipped with a two-prong tip — much like a barbecue fork — which is used to work flat-head screws with two tiny rounded depressions on either side of the head. This makes it virtually impossible to remove these types of screws without a spanner.

Since they are quite secure, these screwdrivers are usually used by maintenance workers on bus terminals, elevators, restrooms, and subways. Spanners are available in a size range of four to 12. 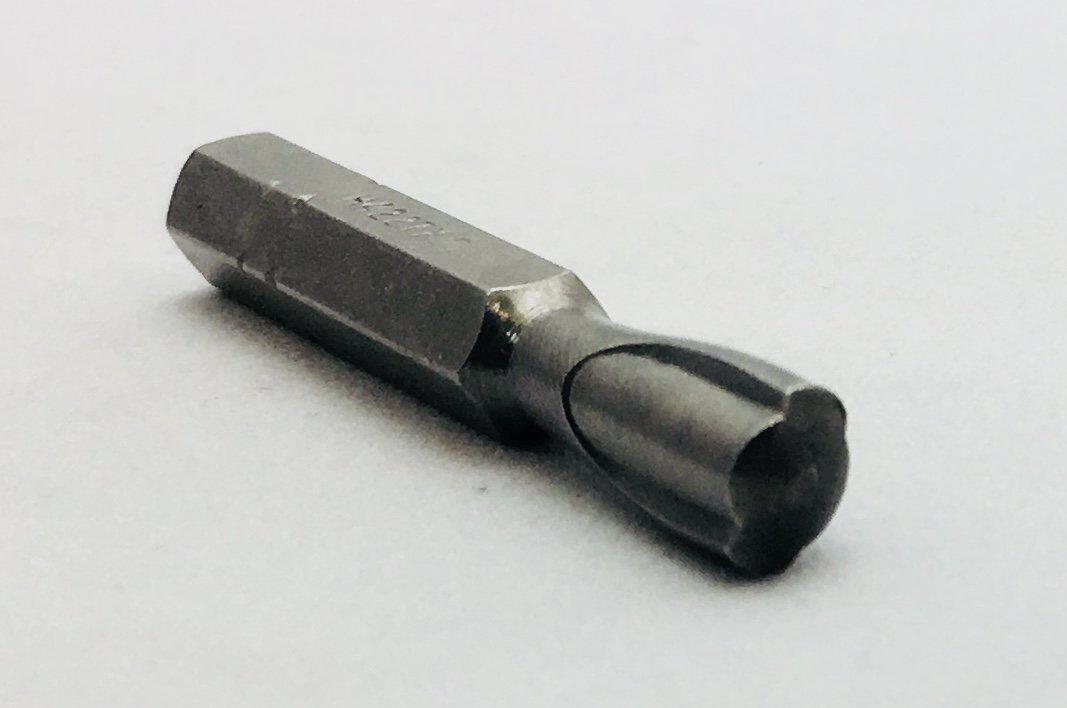 Also known as a bow tie screwdriver, these tools are used to work screws that have a bow-tie-shaped slot. These screwdrivers are used throughout the automobile industry and were popularly used in old General Motors (GM) vehicles.

A clutch screwdriver comes with improved torque and can withstand more turning force than others. However, the matching screws can also be loosened and tightened with slotted drivers. There is another, more secure, version that can be screwed by a slotted driver but cannot be loosened by one.

These types of screwdrivers are found in infrequently maintained places, such as prisons. 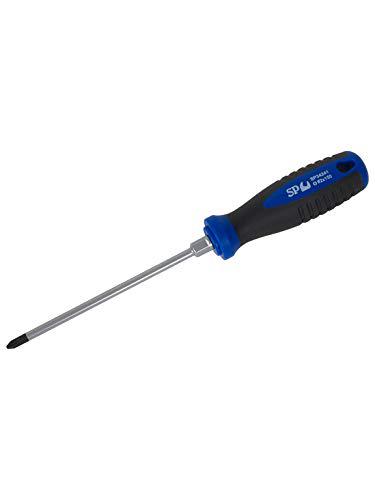 A bolster screwdriver consists of a type of nut welded to the top of the shaft beneath the handle. If a screw is stuck tight to a surface, you can loosen it by exerting extra torque, turning the welded nut with the help of a wrench. This allows this tool to  withstand maximum pressure. 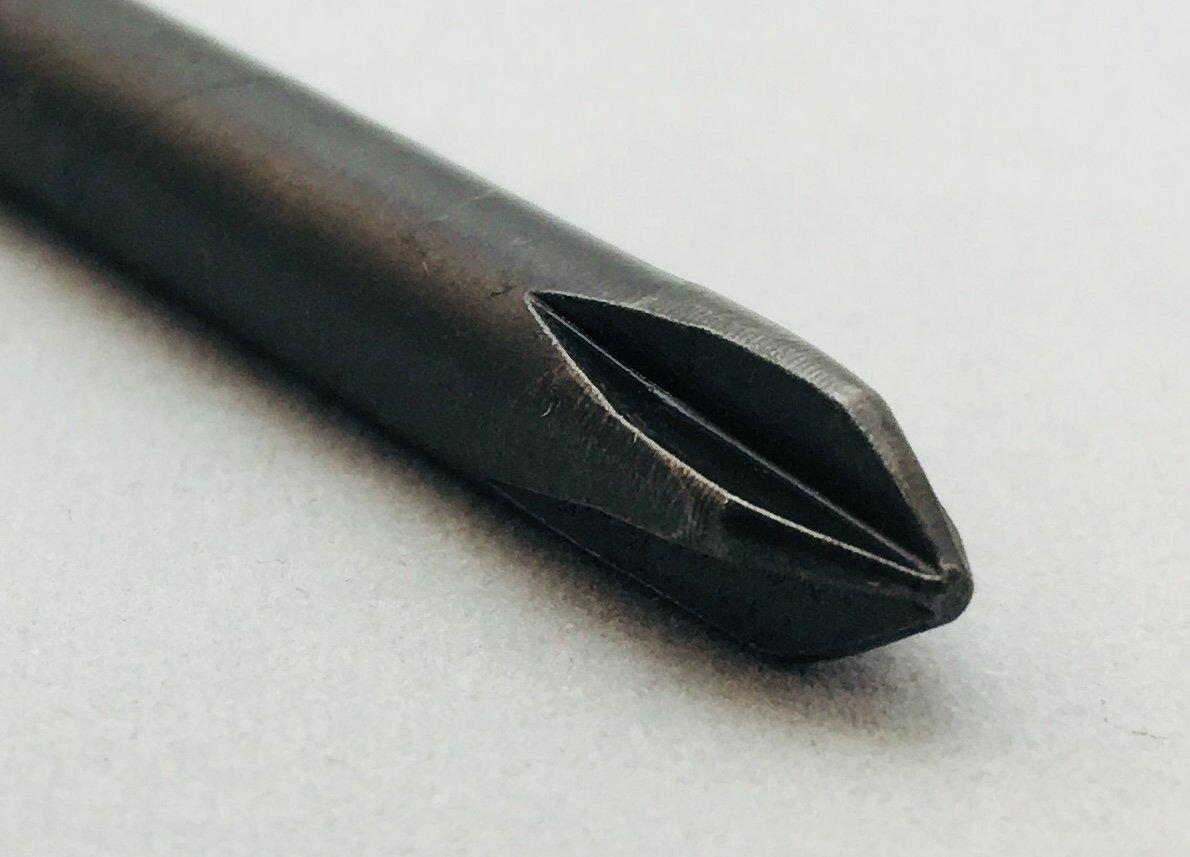 JIS-compatible screws have a small dot near the slot which distinguishes them from other types of screws.

The above screwdrivers were classified based on the screws they worked with; however, many of these types of screwdrivers also come with variations in their handles and shank. The alternative designs can help exert more torque and offer better clearance.

We’ve provided a list of some of the most popular styles below.

These screwdrivers are powered by electricity, which means you don’t need to use your strength to apply torque. Electric screwdrivers are also known as power screwdrivers or screw guns, and can easily and quickly work a screw, especially those with broken heads.

These screwdrivers are run with small batteries, so they can be made in compact designs. Although not as powerful as other types of screwdrivers, they can easily fit in a tool belt.

These screwdrivers are equipped with a rechargeable battery, which means they come with the benefits of both electrical and battery-powered screwdrivers. Unfortunately, this also makes them bulkier and heavier, and as battery charge wears down, cordless screwdrivers lose torque as well.

Also known as watch or eyeglass screwdriver, these are precision devices that work the tiny screws on pocket watches and eyeglasses. Jeweler’s screwdrivers are mostly Phillips head or slotted screwdrivers.

A ratchet screwdriver allows you torque to be applied in one direction. Turning the torque in the opposite direction will allow the ratchet to disengage, allowing free rotation.

This type of screwdriver allows the user to keep hold of the screwdriver while turning it until the wrist reaches its maximum twist. Then the driver head can be left in the screw, and once the wrist is ready, can be twisted back again.

The screwdriver is one of the most commonly found tools across the world. Used in projects both large and small, it’s also quite a useful tool. If you’d like to learn more about how the screwdriver’s history and how it works, make sure to read some of the frequently asked questions listed below.

When and where was the screwdriver invented? Who invented it?

How does a screwdriver work?

A screwdriver is actually one of the simplest tools with one of the most unique tool functions. This tool is composed of a simple piece of metal, usually attached to a handle, that has a uniquely shaped head. The user inserts the head of the screwdriver into the slots on a corresponding screw and turns. The solid metal construction of the device prevents it from bending or spinning, so the object on the other end moves instead.

Can a screwdriver also be used as a chisel?

What are screwdriver sizes?

Screwdrivers tend to be sized by two factors – the width of the screwdriver’s head and the length of its shaft. Both the length and width  of a screwdriver can vary wildly, with some screwdrivers being only millimeters wide, while others might measure almost an inch wide. Screwdrivers are sized both in using both the metric and imperial systems, so it’s always a good idea to look at the scale of the screw used before making a purchase.

How can I magnetize my screwdriver?

What Screwdrivers Should I Buy?

For most people, the biggest factor when it comes to buying a screwdriver is the price. Cheap screwdrivers from unknown brands often have problems with their tips. Sometimes the tips do not fit into any type of screw properly.

Cheap screwdrivers can also be made of soft material that cracks easily under increased torque. These can also damage the screw to the point that it becomes extremely difficult to remove it without damaging the work surface.

When shopping for screwdrivers, always make sure to buy from credible brands. Take a few of the screws needed to work with to see if they properly fit the screwdriver.

Never purchase screwdrivers that have tips that do not exactly match the screws intended to use.