Sausages are made with a variety of methods and ingredients in different parts around the world. Here's the ultimate list of different types of sausage. 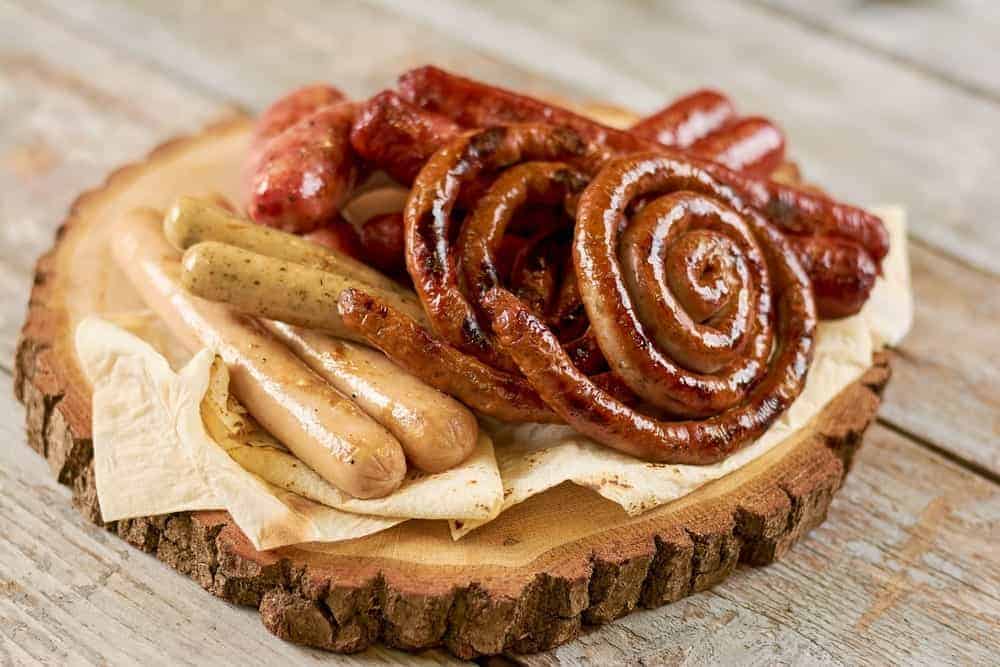 No matter where you live on the planet, you have surely heard about sausages and so have most people around you. They are known to be long, cylindrical products which are made from meat, which can include beef, pork, chicken, veal, and even mutton. They are garnished with various spices and served with different sauces and condiments depending on the region. While sausages are typically formed with a casing that is made out of intestine, it can be made from synthetic materials as well.

However, the most popular sausages in the world are the ones that have stood the test of time and have proven to be delicacies in their own regions and abroad. Here are a few for you to try out on your own.

Smoked sausages are cured with aromatic wood which is burned to produce smoke. Many varieties of smoked sausage are uncooked like Polish sausage and then there are varieties that are fully cooked like Kielbasa. 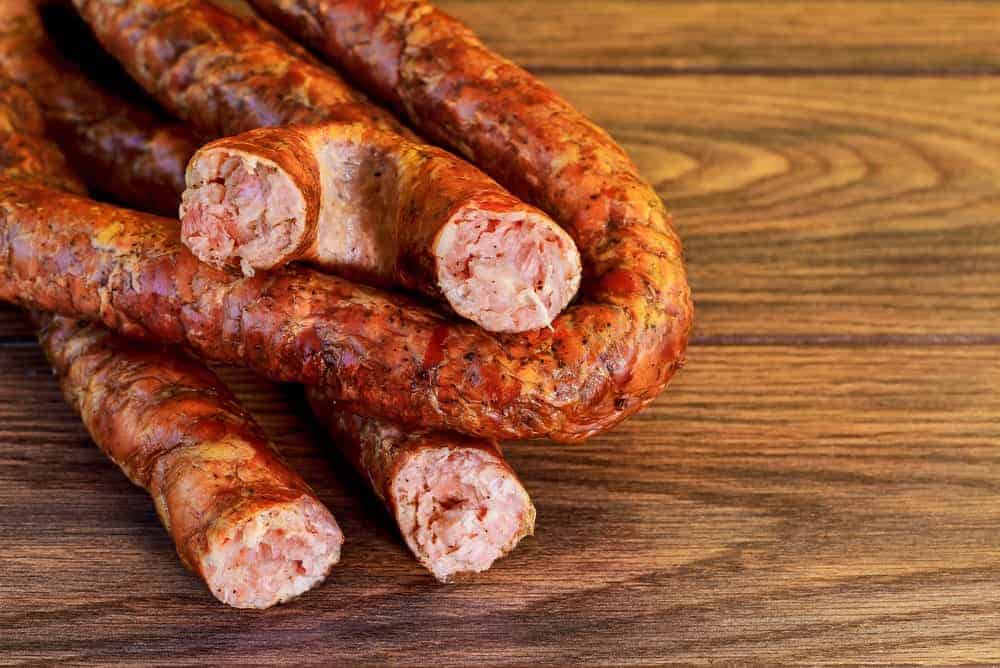 Kielbasa is the common name for Sausage in Poland. They are a part of the staple diet in Poland and are considered a delicacy in Polish cuisine. The term usually refers to a u-shaped, smoked sausage that can be made from any type of meat. They can be made from lamb, pork, beef, turkey, chicken, and veal.

Of the different varieties of Kielbasa, there is one called Kielbasa Lisiecka, which has been given special protection by the European Union. This is Protected Geographical Indication (PGI) protection which is granted to exceptional agricultural products and food products that are cherished by certain regions. 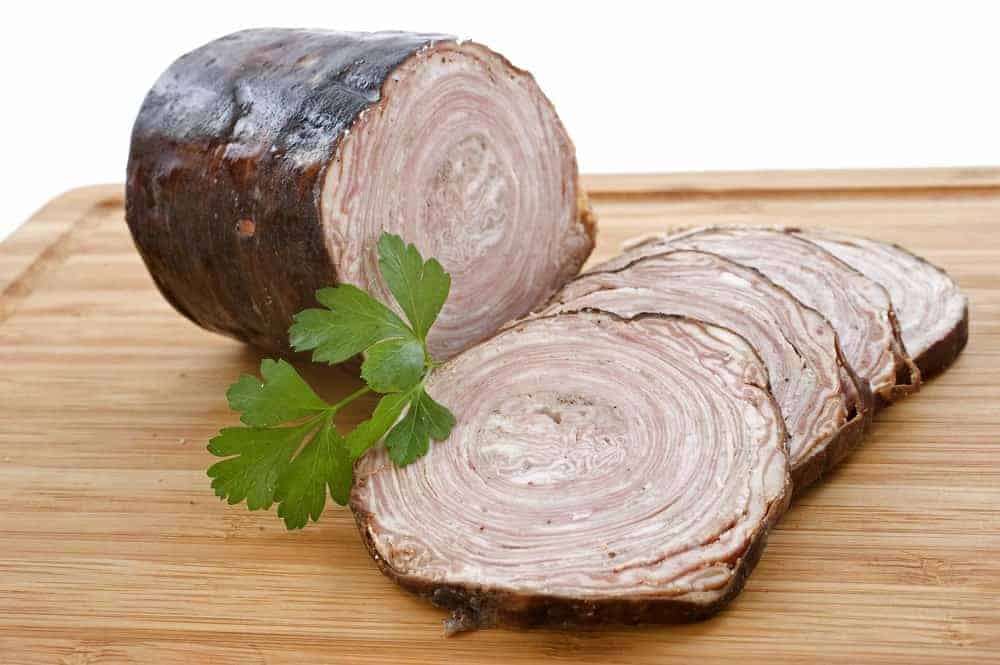 This is a smoked sausage that is made using pork. It originated in France and was brought to Louisiana by French Immigrants. In the US, the sausage is associated with Creole cuisine and is a coarse grained smoked sausage. The traditional ingredients used in preparation are pork, garlic, pepper, wine, and onions. This is also complimented by the seasonings that are used after preparation.

The pig intestines that were traditionally used to make the sausage were seasoned with cayenne pepper and salt. Then they were soaked in water and a vinegar bath overnight. They were then rinsed before stuffing in to another lengthwise.

Pork sausage is made from different types of pork. Not only are pork sausages made from ground pig’s meat, but sometimes they are even prepared using pork guts. 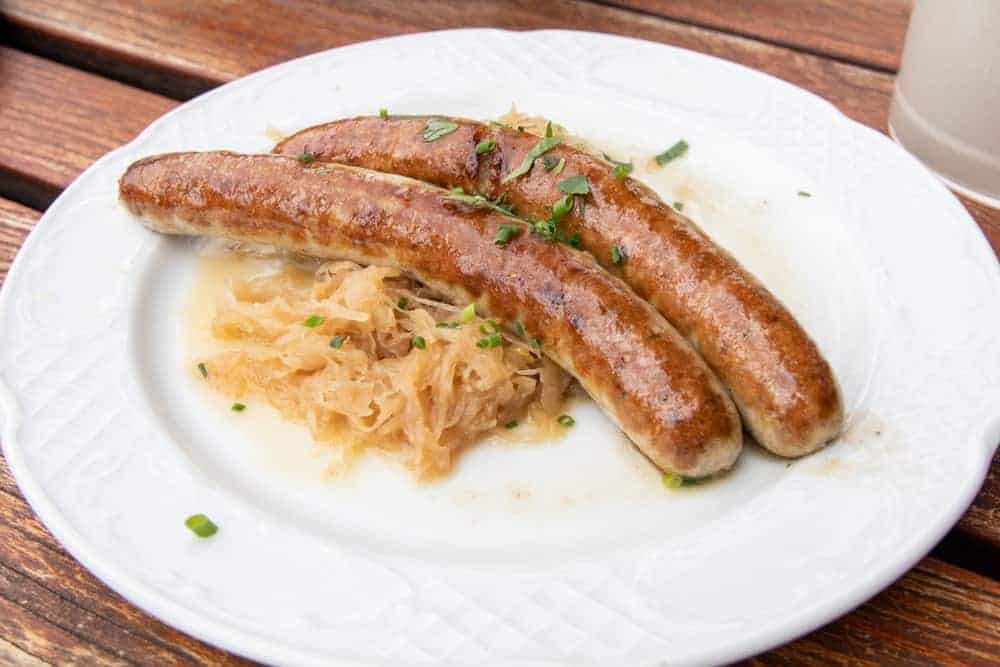 Bratwurst is a pork sausage that is most prevalently eaten in Germany. The name literally means split sausage and is derived from the Old High German tongue. Brat means finely chopped meat and Wurst literally means sausage; although, in today’s tongue, Wurst means pan-fried or roasted.

Again, as with most sausages, recipes for Bratwurst vary widely by region. Even locally there are dozens of ways to make Bratwurst. Some sources list up to 40 different varieties of bratwurst and some of the most well-known ones originated in Franconia. 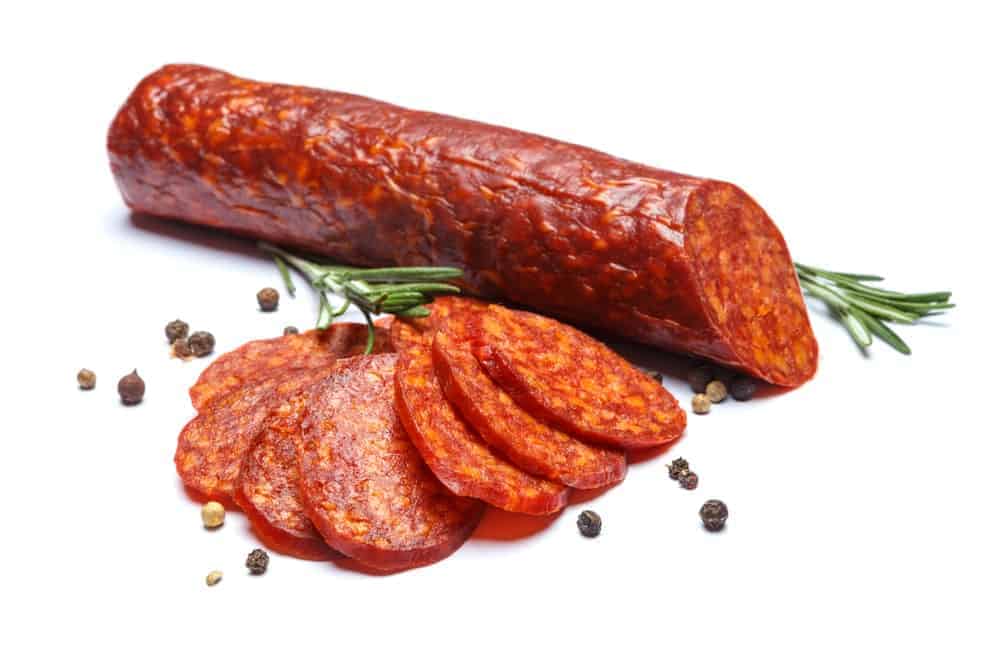 Pork smoked sausage is most commonly found in the western European regions of Spain and Portugal. The type called Chorizo is made from the intestines of pigs and is prepared in natural casings. This is a method that is being used since the times of the Roman Empire.

The Chorizo is cured, fermented, and smoked during preparation. In Europe, it may be sliced or eaten without cooking. It can also be added to flavor other dishes without any cooking beforehand. Spanish Chorizo and Portuguese Chourico are both very similar in their smokiness. They both have a deep red color and are both seasoned with smoked, dried, red peppers.

The most common use of Chorizos in food is to be eaten in a sandwich or to be grilled and fried in a liquid, such as strong alcohol or apple cider. They can even be used in Pizza toppings similar to how salamis and pepperonis are used. 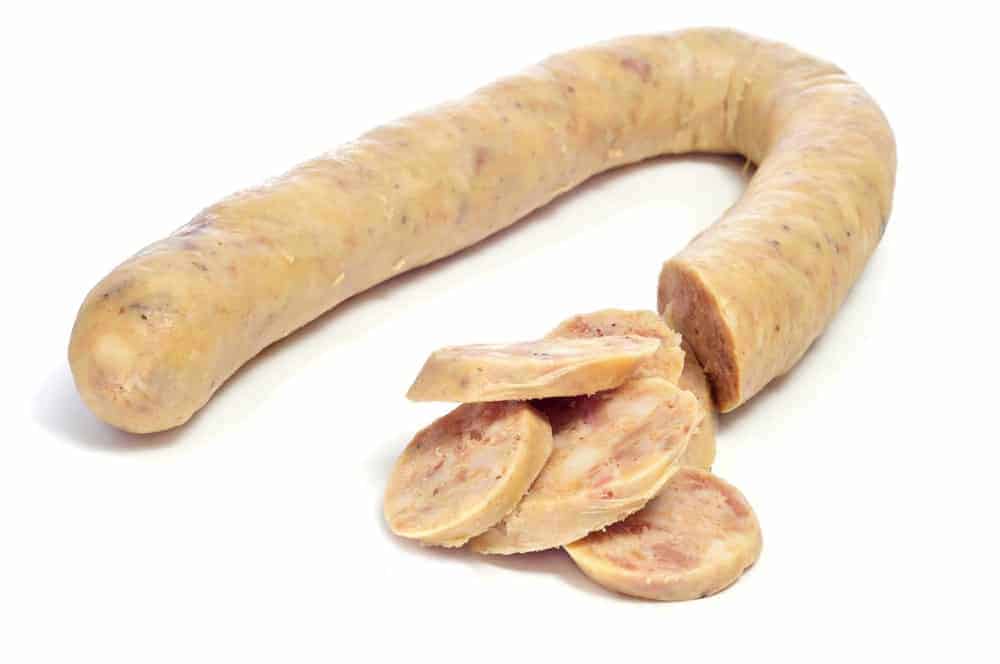 This is one of the most important parts of the Catalan cuisine. It’s based on old recipes from the Roman Empire and made from raw pork and spices. The variants that are found in Italy and Portugal and parts of Brazil all date back to this ancient recipe.

The most popular varieties of Butifarra are:

See also  Albacore vs. Tuna (Is it different? The same thing?) 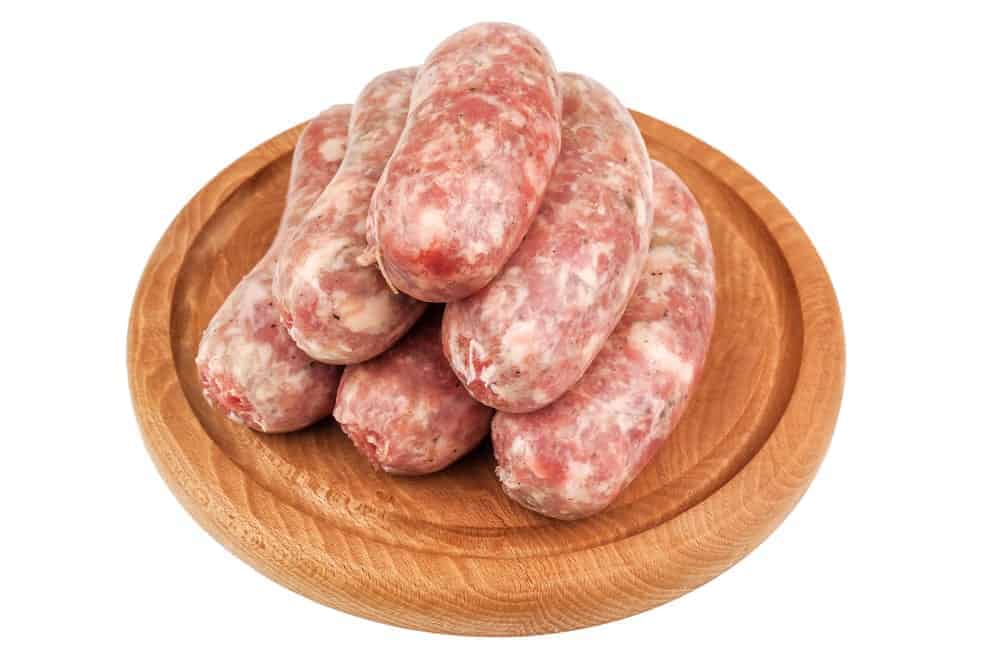 Italian Sausage refers to a style of pork sausage in America commonly known as salami. It’s noted for being seasoned with a lot of fennel. In Italy, a wide variety of sausages are made from different products and aren’t the same as the Italian Sausage people eat in America.

Boiled sausage is made from boiled meat as the name suggests. No traditional oil or spices are used in the preparation while the sausages are heated. They can be served completely without seasoning but it is completely normal to serve them with traditional sauces. 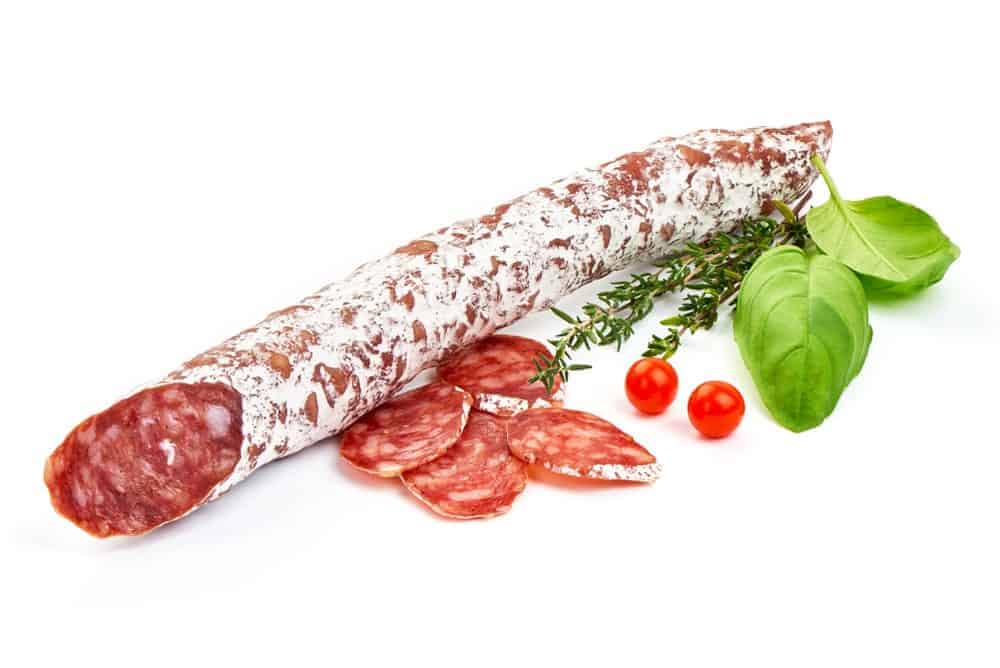 Boiled sausage is known as Fuet in Catalan, Spain. This is a Catalan cuisine made from pork meat in a pork gut. It is most famously made in the county of Osona. It is flavored with black pepper and garlic and sometimes aniseed. However, it is different from Chorizo in that it doesn’t have any Paprika. The city of Olot and its surrounding zones have a tradition of making Fuet.

Cooked sausages refer to all types of sausages that are heated in some manner. They can be boiled, baked, fried, or smoked and cured as well. What does separate them from boiled sausages is that they are traditionally seasoned with spices. 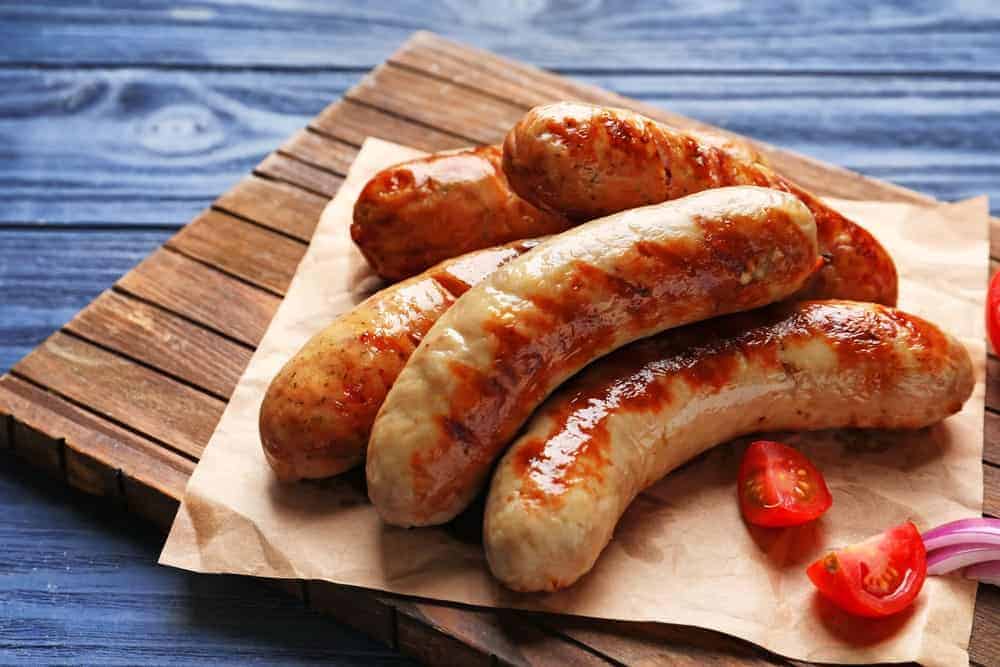 This cooked sausage is known as the Longaniza in the Spanish region in Europe. It is very similar in the way it is prepared and its taste to the Chorizo and is associated with the Portuguese sausage, linguica. The defining tastes and preparation techniques vary widely. It is very popular in Spain, Puerto Rico, the Dominican Republic, El Salvador, Mexico, Chile, Argentina, and Uruguay.

This is how the dish varies by region:

Blood sausages or blood pudding, as they are known in Britain, are sausages that are filled with blood. They are dried or cooked with filler until they are thick enough to solidify when they are cooked. The animals whose blood is used can be pigs, cows, sheep, goats, or ducks. 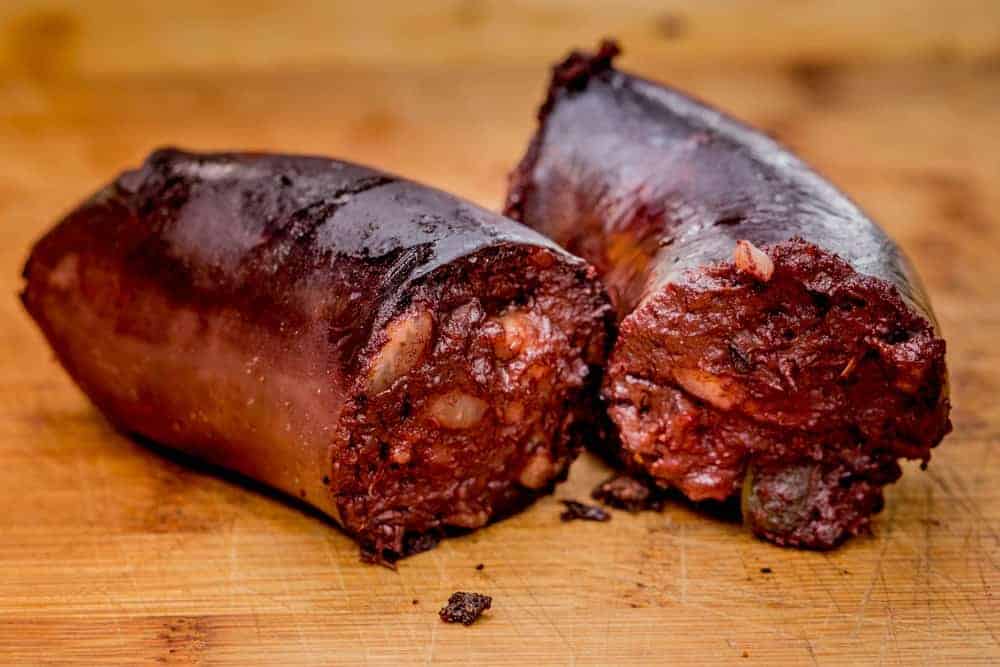 Morcilla is a type of blood sausage that is very popular in Spain. The Morcilla has a lot of variants including the Morcilla de Burgos, which has a lot of pork blood, rice and onions. It can also be served in cylindrical or gut shapes.

In Extremadura, the Morcilla is served with mashed potatoes and in the Canary Islands, it is served sweetened. There are even varieties of the dish that are served with pine nuts and almonds.

Raw sausages are uncooked sausages that are devoured without any heating or traditional cooking. 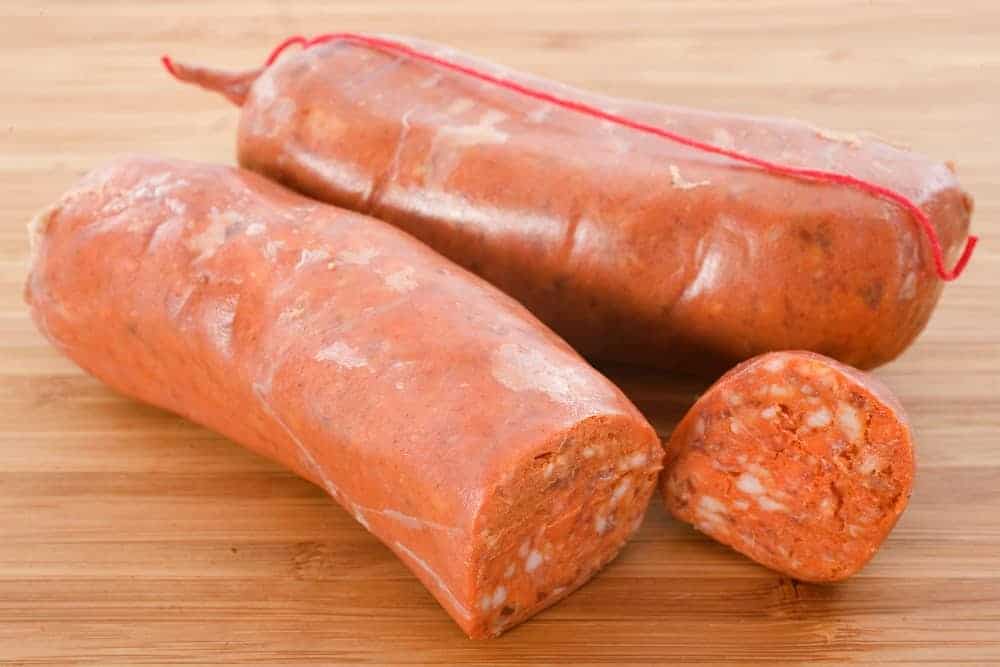 The Sobrassada is a raw and cured sausage from the Balearic Islands. It is made using pork, paprika, and salt. It can also be created using other spices and other types of meat. The dish is prepared with pork loins and pork bacon. The two parts are minced and mixed in with salt and paprika and black pepper. Some makers do also choose to add cayenne pepper to the mixture.

The dish is also served in various other regions like Algeria, Tarbena and Sicily with different spices and preparation methods. 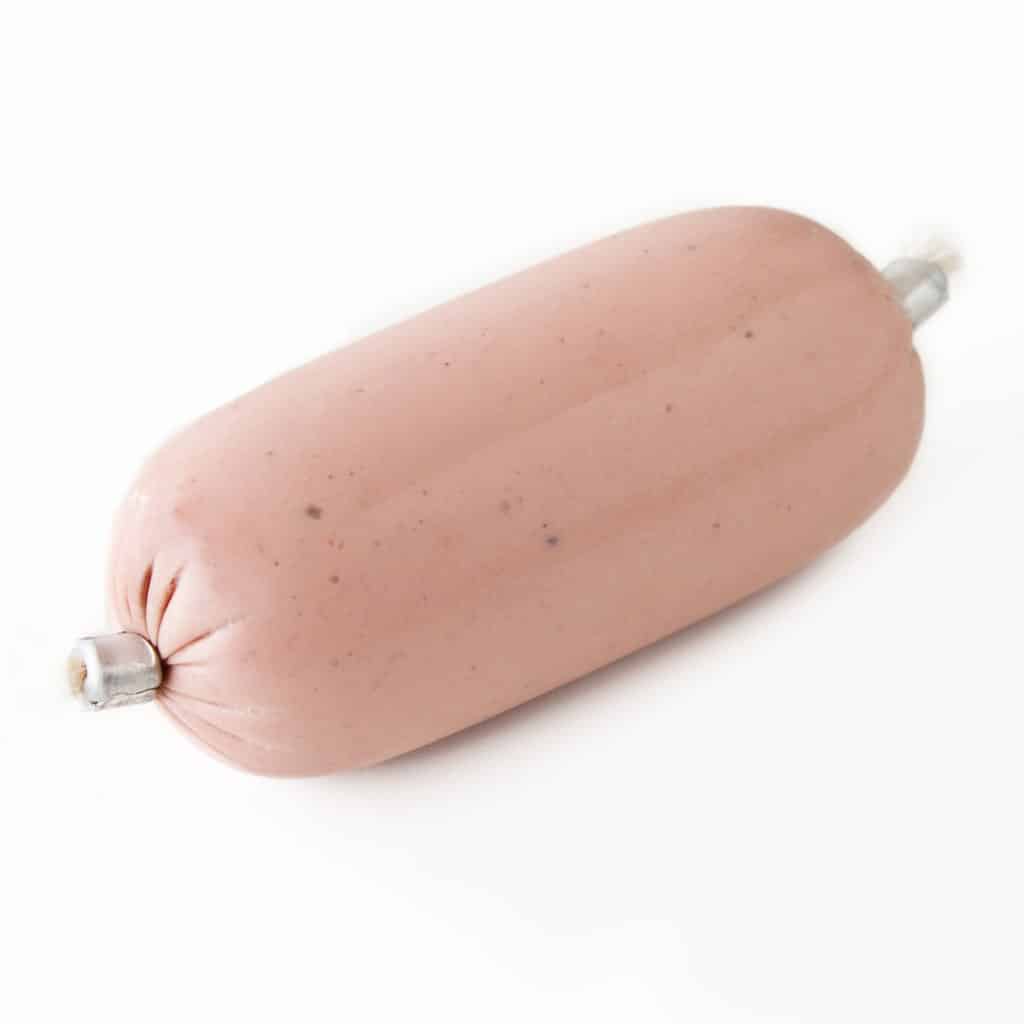 Liver sausages are made from grinding pork of beef livers. They require an additional step and all the labor is done within the boundaries of the kitchen. This type of sausage is traditionally not smoked. 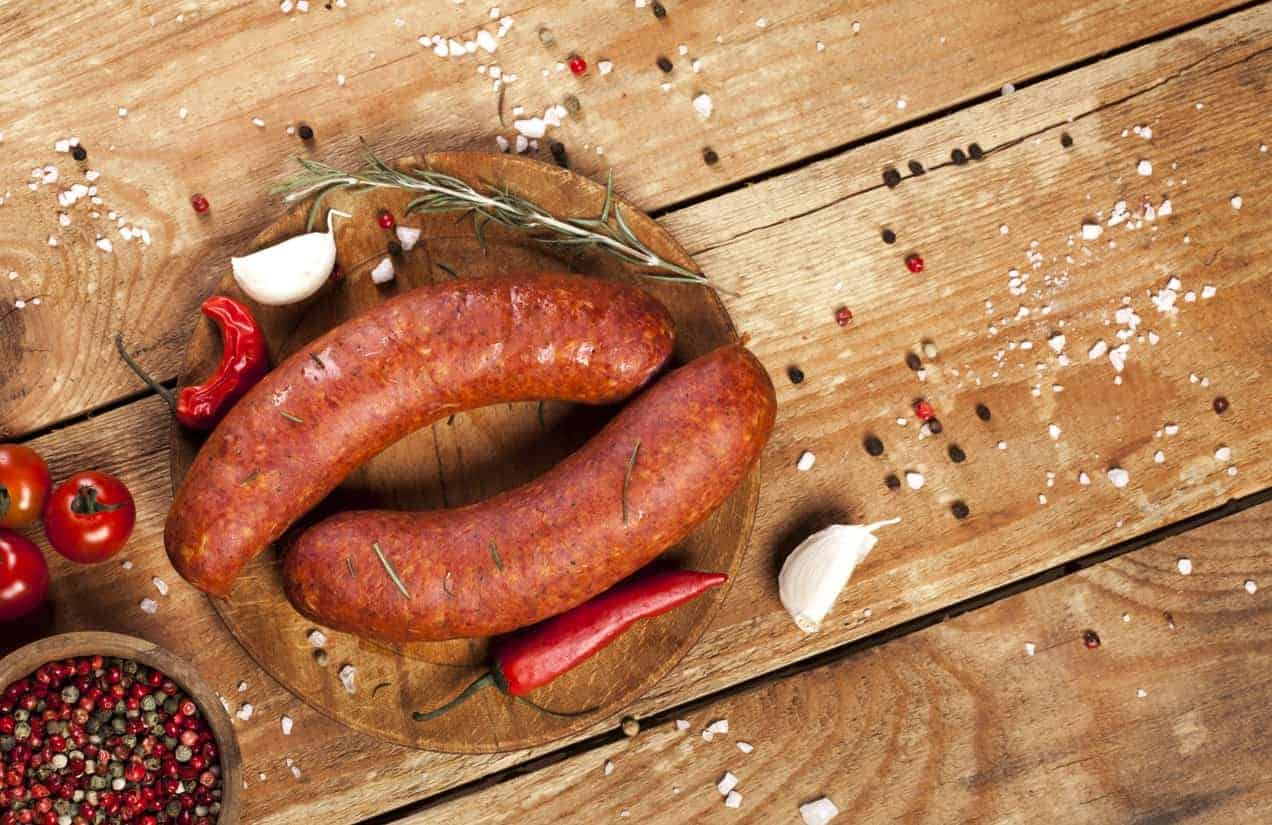 Liverwurst is consumed in many countries in Eastern Europe and Scandinavia. Its varieties contain pig or calf livers. They are seasoned with nutmeg and mustard seeds as well as marjoram.

Beef sausages are prepared with beef as the name suggests and are usually prepared with ground up cow’s meat. They are considered much more succulent than chicken or liver sausages. 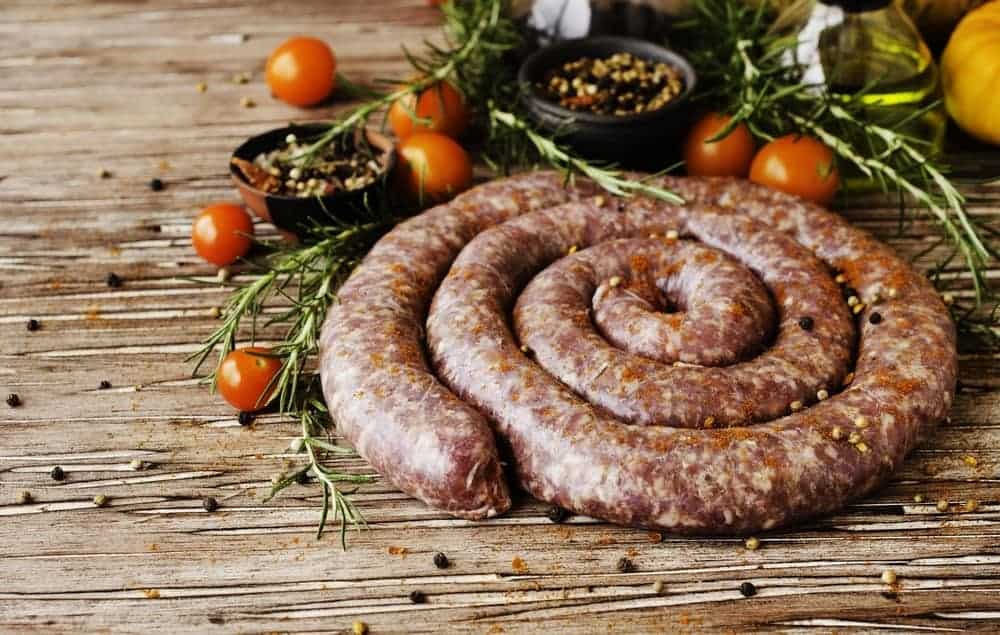 Kiolbassa are all-natural beef sausages that are sold in America. They feature seasoning with sea salt and turbinado sugar.

See also  What is a Chaga Mushroom? (The Superfood of Medicinal Mushrooms?) 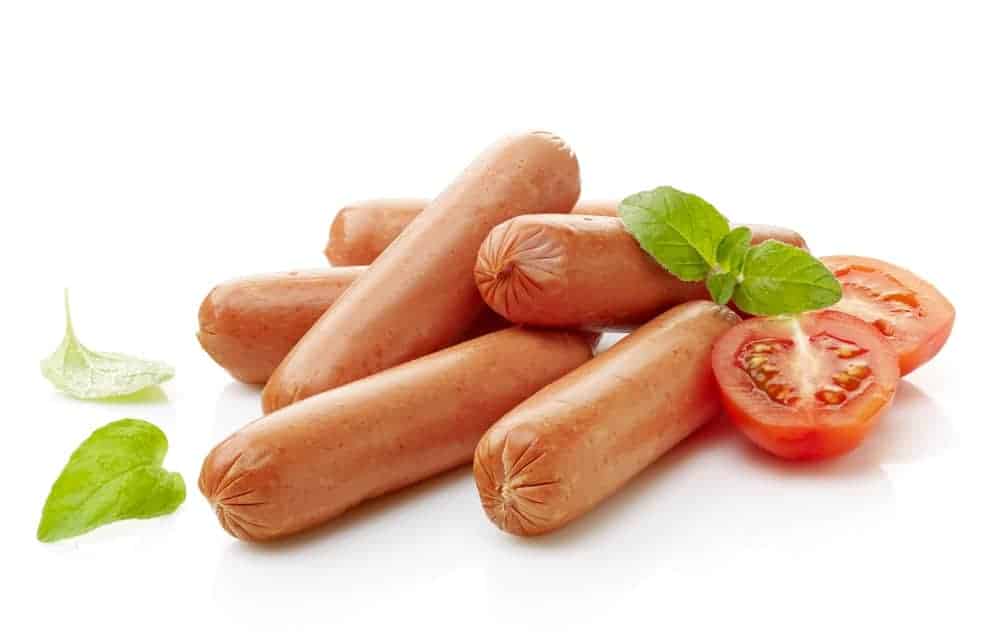 Chicken sausages are made using different types of chickens and are considered much softer in texture but much more sumptuous in taste by some, than the normal pork or liver sausages.

Sausages are considered a delicacy in most places around the world and are made from all kinds of meat and seasoned with all sorts of spices. They aren’t about to go out of fashion any time soon and will remain on the menu for generations to come.