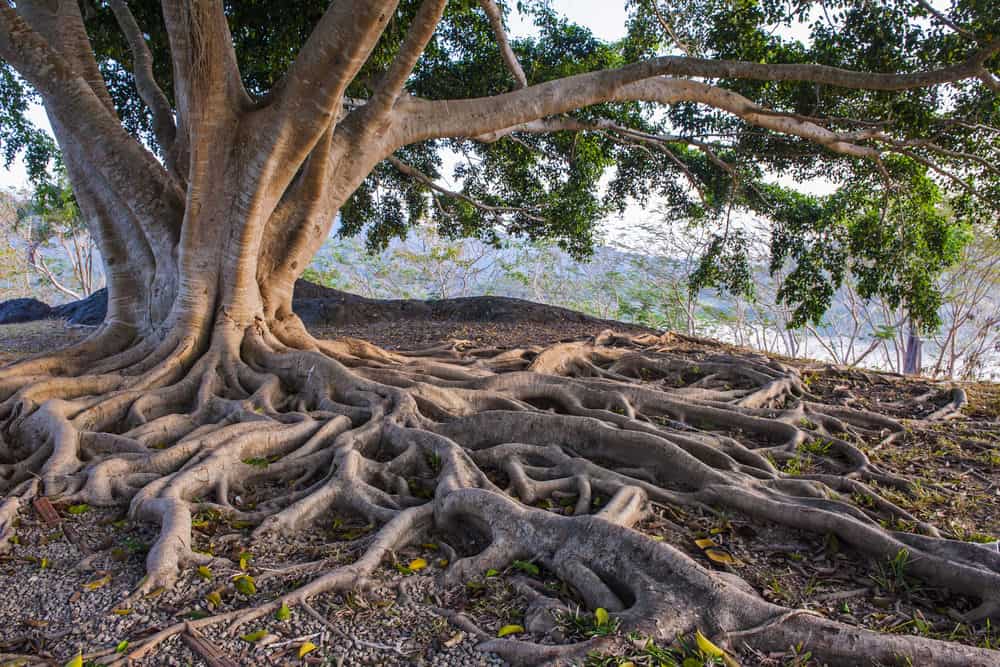 Roots are the non-leaf part of a plant’s body that does not bear any nodes. It is the organ that lies below the surface of the soil. Roots can also be aerial i.e. growing above the surface of the ground or aerated which means floating over the surface of the water. Roots are responsible for providing the stems and the leaves with adequate water and nutrients for their growth.

Roots form a major part of a plant body, in terms of bulk and function. The major functions of the roots are as following:

The root system of the plant provides physical support by anchoring the plant body to the soil. Many plants can stand erect for hundreds of years because their roots grow deep into the soil and hold the plants strongly in place.

In deserts, roots grow deep into the permanent water reserves. Desert areas where plants are found to be growing are considered to have underground water reserves. This greatly helps in deciding where to dig a well.

Roots have specially designed channels for the transport of absorbed nutrients and water to stem and leaves. Moreover, they also have channels through which organic food can be transported from aerial parts of the plant to the roots.

Some roots like carrots and sweet potatoes serve the purpose of a storage organ. They store carbohydrates and water. Roots of some plants found in desserts can store up to 70kg of water.

Photosynthesis is the process by which plants prepare their food. Some roots are capable of photosynthesis as is the case with aerial roots of mangrove plants and epiphytic orchids.

Plants that grow on the surface of stagnant water have specialized roots that are called pneumatophores which diffuses the oxygen from the air.

Some special roots are capable of reproduction. They serve as a means of perpetuating a species. In some plants like the mature agoho, offshoots are seen growing around the trunk profusely from roots that are growing horizontally.

The root has four main regions:

The root cap is present at the apex of a root. It is a thimble-like structure. The apex of a root is tender. A root cap protects this tender end and aids the root in propagating deeper into the soil.

The root cap secretes mucilage which is responsible for lubricating the passage for the root through the soil. This mucilage also aids in the absorption of water and nutrients. Root cap wears out but it is renewed constantly.

The term meristematic means rapid growth. This region is present just above the root cap. The cells in this region grow rapidly. They are very small and extremely thin-walled. They have dense protoplasm.

The Region of Elongation

The cells in the region of elongation rapidly enlarge and elongate. The cells in this region are responsible for the growth of root length.

The Region of Maturation 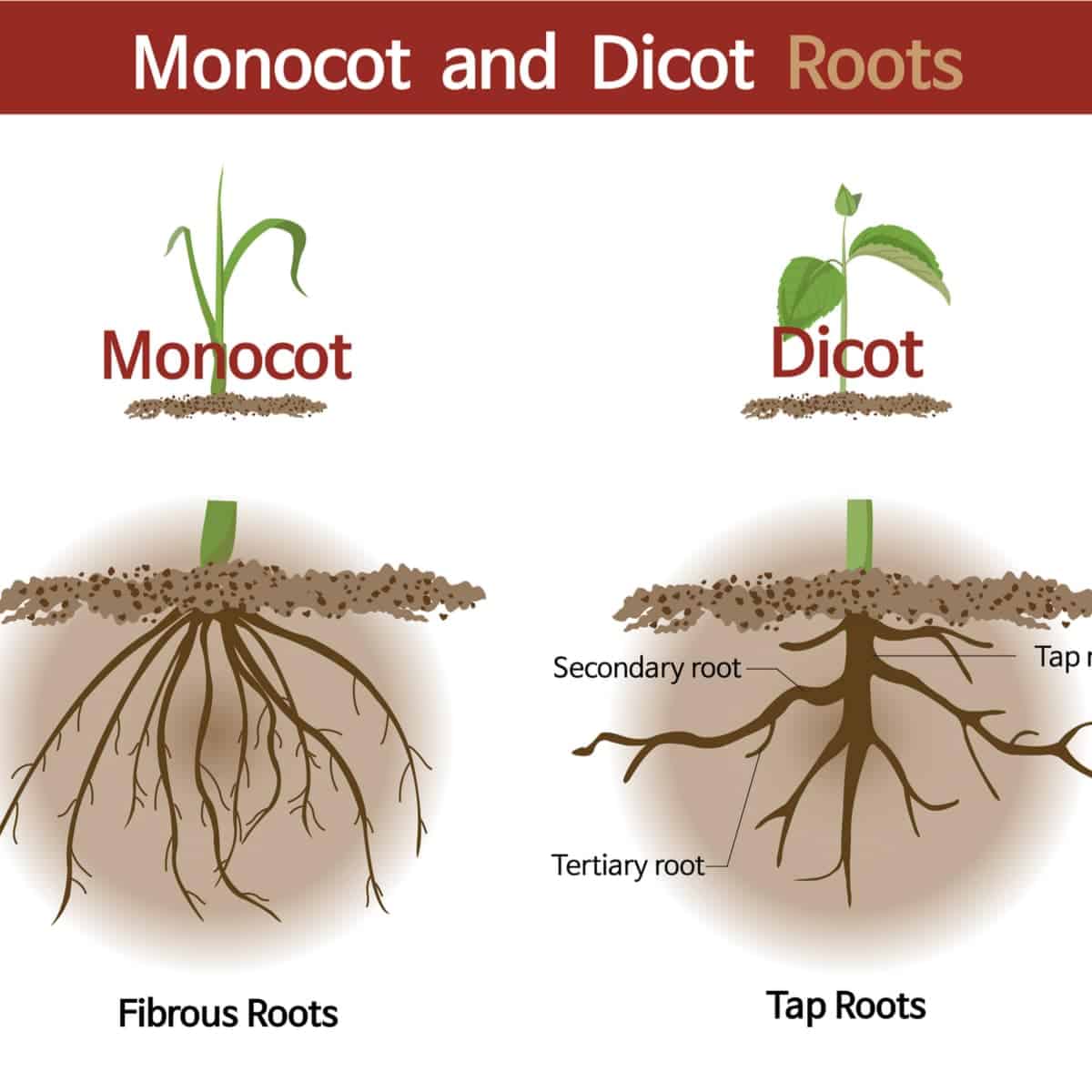 The differences between monocot roots and dicot roots are:

The pericycle gives rise to lateral roots only. The pith is well developed and large. Numerous xylem and phloem are present in monocot roots. There is no secondary growth.

The pericycle gives rise to several lateral roots, cork cambium, and some part of the vascular cambium. The pitch is absent. There is a limited number of xylem and phloem. Secondary growth occurs in the dicot root.

Different Types of Roots with Examples

There are different types of roots in plants depending upon the type and species of plants. The major types are:

Fibrous roots are found in monocot plants. They are slender, branched, and grow directly from the stem. These roots tend to grow close to the surface and spread horizontally.

They are characterized by a cluster-like appearance with numerous roots together, all nearly of the same size. In the fibrous root system, the primary root is short-lived. It is replaced by numerous roots.

Fibrous root system does not provide strong anchorage to the plant as they do not penetrate deep into the soil.

Taproots are found in the majority of dicot plants. This type of root is a direct elongation of the radical. Unlike fibrous roots, taproots are not branches. Instead, they are a single primary root that grows deep into the soil. A taproot gives rise to lateral branches (secondary and tertiary roots) leading to the formation of a taproot system.

The branches of a taproot grow in acropetal succession which means, the longer and older ones are present at the base while newer, shorter ones are near the apex of the primary root.

Taproot system provides a very strong anchorage. The reason for this strong support is that they penetrate deep into the soil.

In some plants, the taproot does not grow too deep. Instead, its lateral branches grow longer horizontally along the surface. These types of roots are called feeder roots.

Adventitious roots are similar to the fibrous roots. However, they can be underground or aerial (above the ground). They can grow from any part of the plant except the radical.

Usually, they grow from intermodal, stem nodes, and leaves. These roots can be thick, thin, or modified according to the species. Adventitious roots arise under stress conditions such as waterlogging after floods.

Creeping roots are the types of roots in plants that do not penetrate deep into the soil. They are shallow and spread a long way horizontally from the base of the plant. Many trees have creeping roots.

Tuberous roots are very thick roots. They store significant amounts of food to feed the whole plant. They are a fleshy, enlarged, and modified storage organ. They are modified from the stem.

Water roots are the types of roots that plants in water grow. They are finer and more brittle. They have a capability to allow oxygen from the atmosphere to diffuse in which is then used by the roots for metabolism and growth. They are morphologically different from soil roots.

Parasite roots are types of roots that attach themselves to the other plant and suck nutrients from it. They do not offer any benefit to the host plant. Instead, they cause serious damage, hence the name, parasite roots.

The facts about roots listed below are some amazing pointers that we are sure you have never heard of before:

Uses of Roots to Man

Roots are widely used by man. Some of the most prominent uses of roots to man are:

Important Medicines Made From Roots

As mentioned earlier, roots are a source of some very important medicines. We have listed down the most prominent ones for you.

Turmeric root is capable of treating anything from stomach pain to arthritis, to disorders of gallbladder and liver, to menstrual cramps, to infection and headaches. Turmeric is mostly used as a spice but the medicinal uses of turmeric root are just phenomenal.

Ginger is effective in cases of diarrhea, nausea and upset stomach. It can also be used for relief from cold, congestion, flu, and headaches.

Licorice has been used for ages to treat stomach ulcers, bronchitis, and sore throats. According to some studies, licorice can also be helpful in the treatment of hepatitis C.

This medicinal root can be used to treat arthritis, liver diseases, and fibromyalgia.

Valerian is used for treating sleep disorders. Many people who are struggling to get out of their habit to consume sleeping pills have benefitted from Valerian. Some studies suggest that this herb can make chronic insomniacs fall asleep more easily and quickly.

Who knew roots were such magical part of a plant? Not just they are the heart and lungs of a plant but they offer enormous benefit to humans.

How fast do roots grow?

Three weeks to a month. Creating new plants from clippings is simple, but requires extra attention to guarantee success. The time needed for a plant to generate new roots varies from species to species, but in general, it takes at least three weeks.

Why are roots important?

There are many critical roles that are played by a plant’s roots. As the plant’s roots hold it firmly in place, it is able to withstand the effects of wind, water, and muck. It is the plant’s root system’s job to draw oxygen, water, plus nutrients from the soil and then transport them to the plant’s upper parts (the stem, leaves, and flowers).

Can a plant regrow its roots?

If less than a quarter of the root zone is damaged, numerous plants may survive and regenerate. Damaged or broken roots will regenerate. Growth is stunted because water and nutrient intake are impeded. The new development, however, will not proceed in the same way.

Can bamboo roots grow through concrete?

If concrete is solid, bamboo cannot damage or grow through it. However, bamboo, if unchecked, may invade homes through any number of openings it can find.

The rhizomes of bamboo plants are capable of sending up shoots that can penetrate and destroy structures. Nevertheless, bamboo is incapable of breaking through solid concrete due to its strength.

Can you cover tree roots with dirt?

It is not recommended but if you must, only do it slightly. Yet, you should be warned about covering a tree’s roots with soil.

Lenticels, which are structures for exchanging gases, cover the roots on the surface. Trees can die if their roots are buried under too much dirt because they need oxygen to survive.

Trees can survive depending on the level of damage to its root. If any significant portion of a tree’s root system gets damaged it can be catastrophically compromised.

In most cases, a tree’s health can be compromised by destroying only 20% of its root system. To cut off 40% of the tree’s root system would likely be disastrous. It’s dangerous, too, and needs to be taken out.

Do roots have chloroplasts?

No! Chloroplasts are absent from the underground organs and inner stem cells like the root system and bulb.

Chloroplasts would be ineffective in these environments since they receive no sunlight. Since their principal functions are reproduction and dispersal, the cells of fruits and flowers often lack chloroplasts.

Can roots strangle a tree?

Yes! When the roots of a tree wrap all the way around the trunk, this is known as girdling. You may say that the tree’s roots are suffocating or strangling it. Indeed, that has been found to be the case. Trees are killed when their oxygen supply is cut off by girdling roots.