Rhododendrons form one of the biggest botanical class of flowering plants. There are about 1000 species of Rhododendrons, ranging from small shrubs to tall trees. We set out the main types plus the most common varieties. 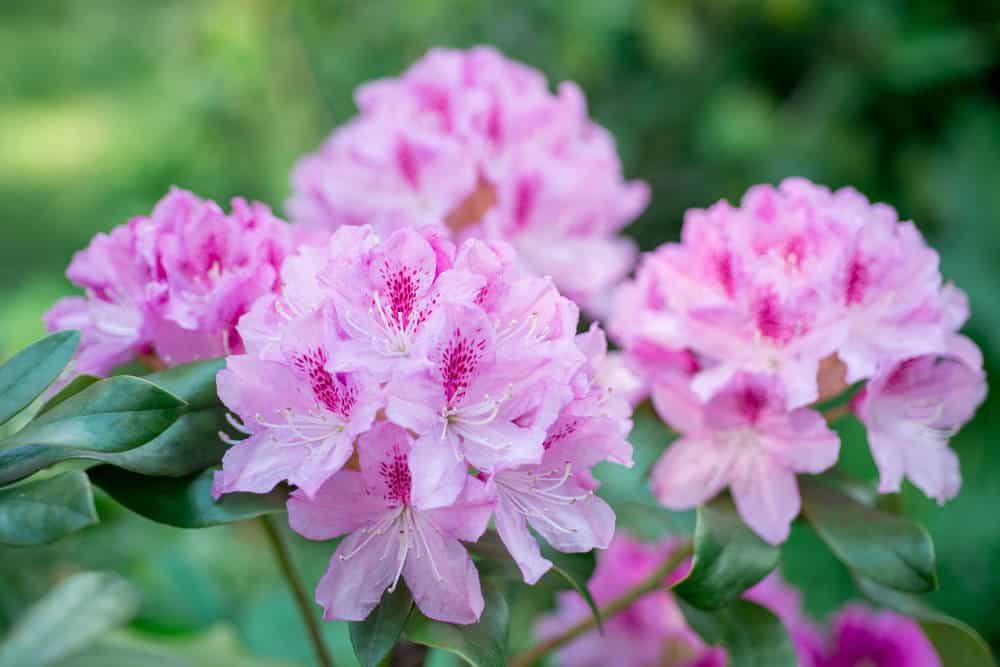 They are mostly found in temperate regions of Asia, Europe, and North America. They can also be found in tropical regions of Northern Australia and Southeast Asia. The widest variety of this plant including some of its most beautiful species are native to Asia.

Rhododendrons can be found in strikingly beautiful and vibrant colors. There are about 1000 species of Rhododendrons. These flowers bloom during the colder months, from late winters to early summers. They are the ideal evergreen flower species for a winter landscape. Months of March, April and May are peak seasons for Rhododendrons. However, some species may flower as early as January while some may flower as late as August, depending upon climate suitability.

There are several types of Rhododendrons. They may be evergreen shrubs, deciduous shrubs or evergreen trees. They are found in numerous shapes and sizes. They may be ground covers which are usually a few inches tall while some may grow into huge trees that go up to 100 feet in height. Wild species of Rhododendrons can grow from sea level to up to 19000 feet in elevation.

Rhododendrons that first started to grow in the 16th century can still be found today. They were first discovered by a Flemish botanist, Charles l’Ecluse. Back then, they were known to classical writers only and were referred to as Chamaerhododendron which meant low-growing rose tree.

Rhododendrons were first introduced in Britain in 1656. They were introduced to the European Alps and thus the name, Alpine Rose (Rhododendron histrum) came into being, the first species of Rhododendrons.

Hybrids of Rhododendron indicium and Rhododendron tamurae were being cultivated in Japan in the 17th century. “A Brocade Pillow” is a Japanese book which was published in 1692. This book describes the classification of color patterns of the Rhododendrons which are presently called Satsuki Azaleas.

A partnership between a botanist John Bartram from Pennsylvania and Peter Collinson, an English quaker, resulted in the exploration of Rhododendrons in America.

In 1752, another species from the European Alps, known as Rhododendron ferrugineum was discovered.

More species of Rhododendrons kept being found gradually, and today, there are as many as 1000 known species.

There are three main types of Rhododendrons:

Evergreen shrubs are the Rhododendrons that are smaller than trees in size and blossom all year long. They provide year-round greenery to the landscape.

Deciduous shrubs are smaller Rhododendrons that shed off their leaves twice in a year, once in fall and then in winter.

Evergreen trees are the Rhododendrons that grow tall to become trees. They are green throughout the year and do not shed off their leaves like deciduous shrubs.

Rhododendrons are a diverse group of flowering plants. This genus covers about 1000 species which are subdivided into numerous subgenera. As mentioned above, they may be evergreen or deciduous. The leaves of this genus are arranged spirally and vary in shapes and sizes ranging from 2 centimeters to 100 centimeters. The genus Rhododendron includes both Rhododendron and azaleas. However, azaleas are not evergreen like Rhododendrons. Rhododendrons have the advantage of producing lush green leaves and vibrant colored flowers all year long.

Some of the most popular Rhododendron varieties are listed below. 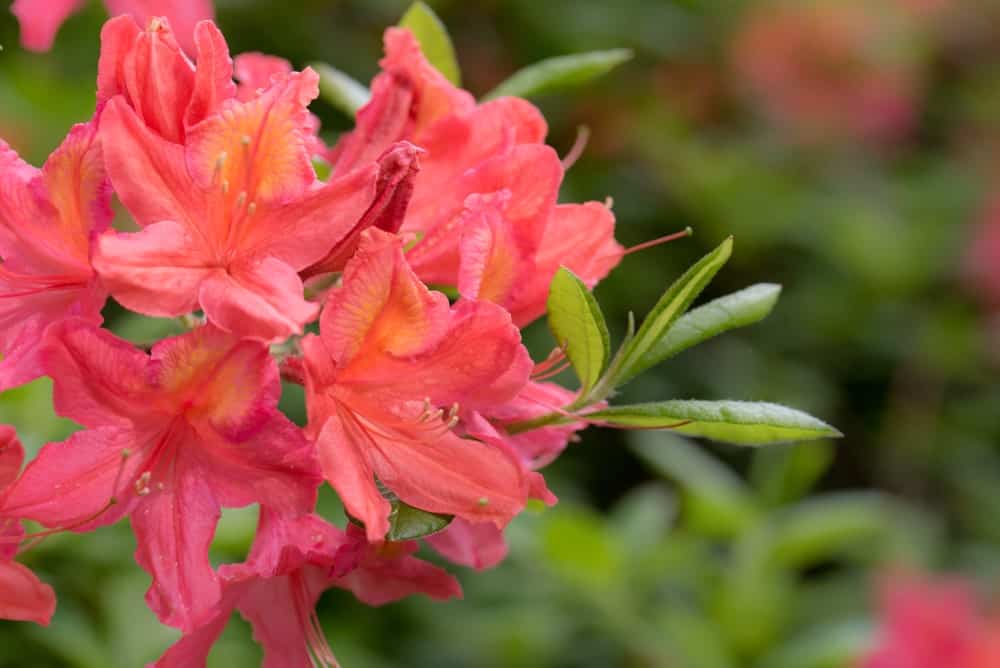 Rhododendron Elviira is an evergreen, broadleaf shrub. In spring, it features cherry red flowers. It contains dark foliage which is quite coarse and has a compact mounded habit. It must be grown in soil which is well-drained, highly organic and acidic. If the soil is not properly drained, the plant will die out. Its winter hardiness score is 4.

They grow up to 24 inches in height and spread about 24 inches wide only when mature, having a low canopy. They grow at a slow rate. If the conditions are ideal, they can live up to as long as 40 years.

Rhododendron Elviira are low maintenance shrubs. They should be pruned only after flowering so that removal of current season’s flowers can be avoided. 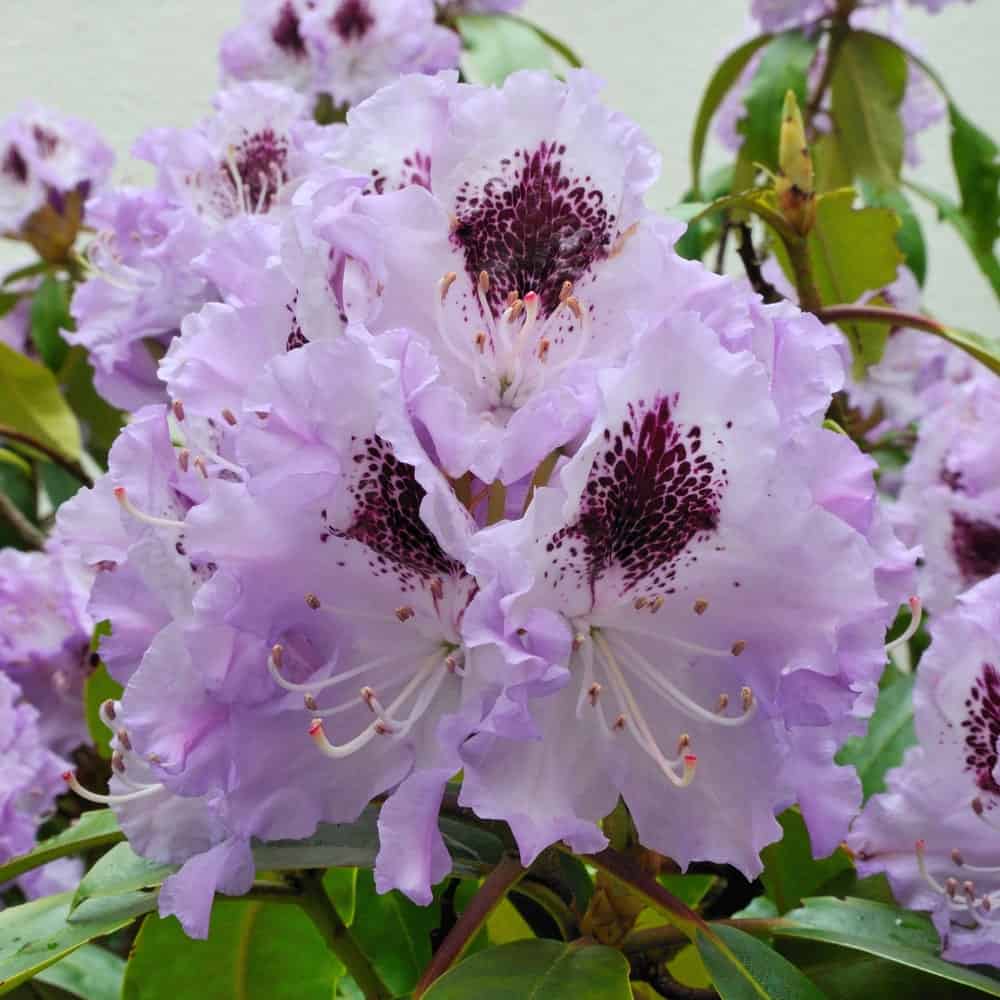 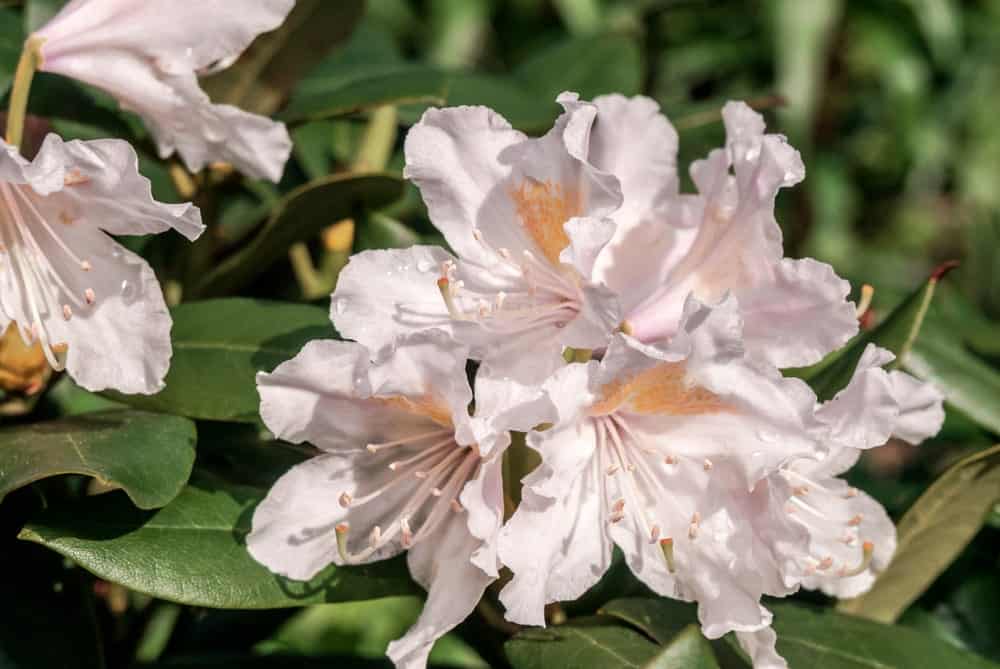 Rhododendron Boule de Neige is an evergreen, broadleaf, dense, round shrub. It has wide but an upright habit. It can grow up to 2.5 to 4 meters in height. It is a slow-growing species. It is grown best in loamy and acidic soil. It falls in winter hardiness zone 6a.

Their buds are pink in color, but they bloom to give white colored flowers. The flowers are funnel-shaped and are 6cm wide. The flowers have yellow or brown colored flecks on the upper lobe. They are found in hemispherical, compact clusters. Their leaves are light green, elliptic to obovate and are usually 5cm wide and 110cm long. 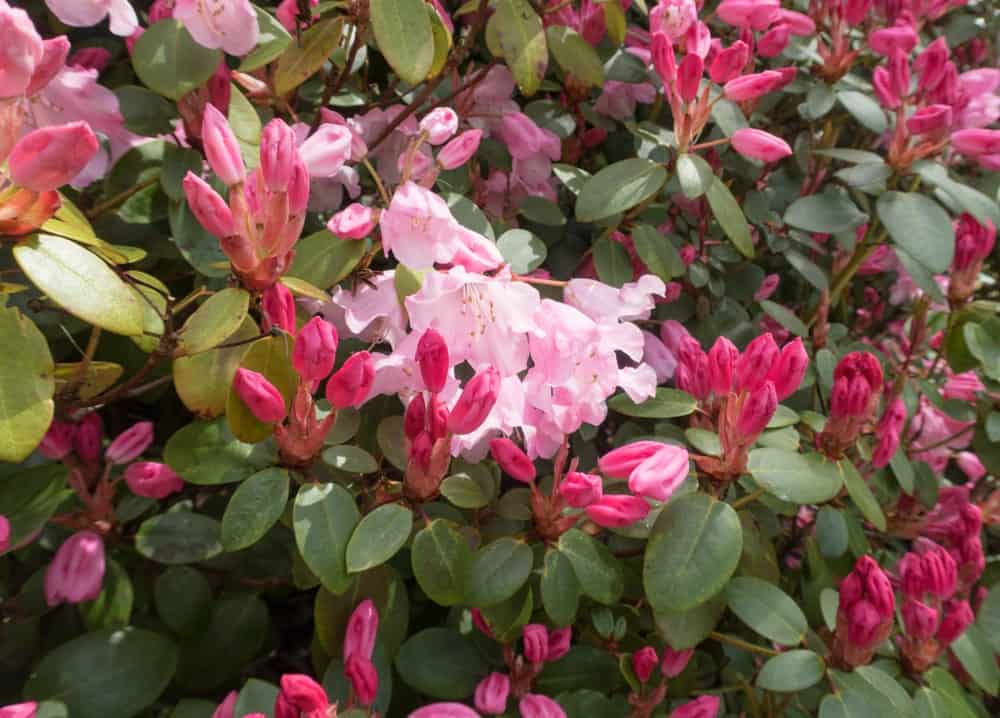 Rhododendron Bow Bells is an evergreen shrub that grows vertically. They are an extremely slow growing species, growing up to 3 feet in 10 years. They grow best in humus rich, leafy, acidic soil, in place that is partly shady. It is classified under zone 4 of winter hardiness.

Their leaves are medium sized, usually 4cm to 6cm long. They have dense, colorful hair on the lower side. The flowers are bell-shaped that are found as loose clusters. The buds are bright pink in color but once open, the flowers are a pale pink. The flowers are about 7cm in length. The leaves of Rhododendron Bow Bells are oval shaded, mid green colored. 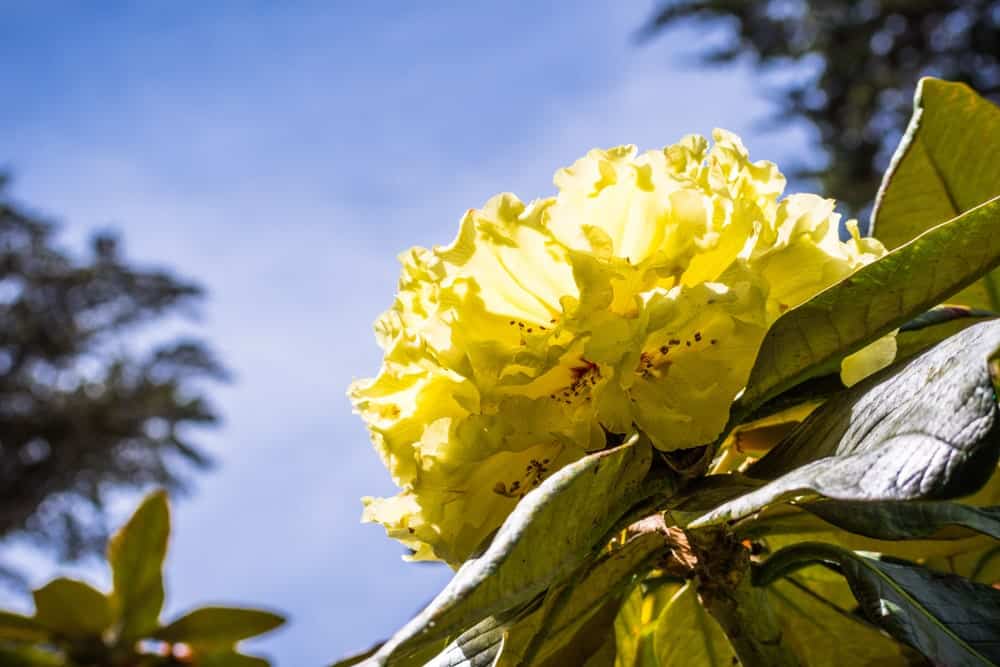 Rhododendron Windsong is an evergreen shrub with an open growth habit. They are slow growing species and can grow up to four feet in 10 years. They grow best in well-drained, acidic soil. They have a cold hardy to 0oF.

Their leaves have a rounded base and are usually 4.5 inches long in length. The leaves are flat, glossy and olive green in color. The flowers are funnel-shaped in a light shade of yellowish green with dark, red-colored nectarines. Its flowers are found in a bell-shaped truss that holds 17 flowers. 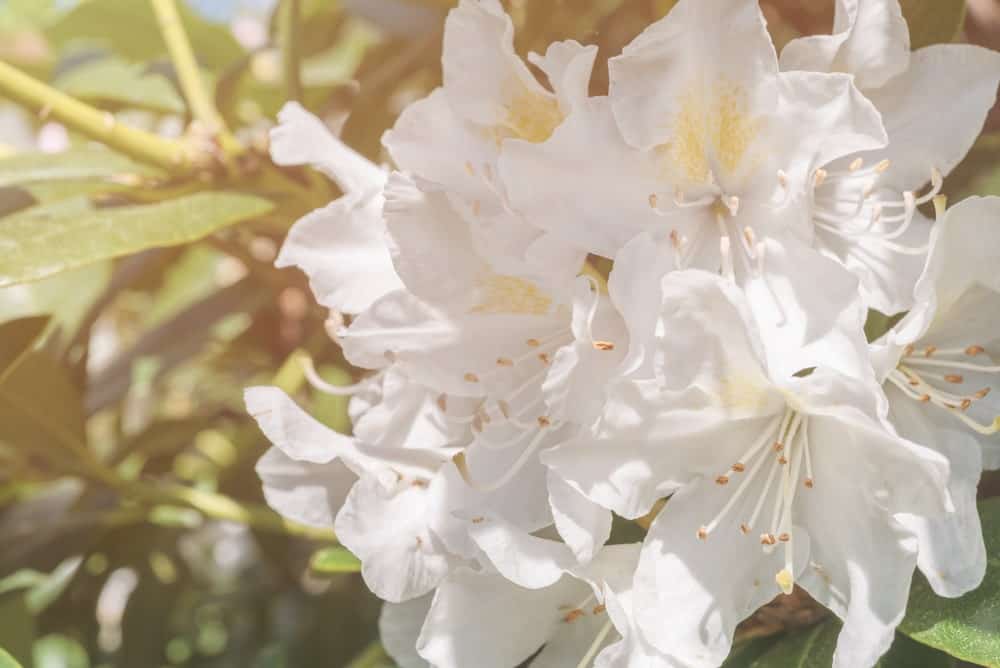 Rhododendron White Angel is an evergreen shrub that has an upright habit. It has an ascending and a compact, vase-shaped crown. These are a smaller species that grow 3 to 6 feet tall. The form this shrub takes is round, and the foliage is somewhat leathery that grows purplish in fall. White Angel is a low maintenance plant. It grows best in soil that is some sand and some clay, with an acidic pH. Its winter hardiness score is 4.

The flowers are in the shades of whites and purples. Flower buds are pink in color, but when the flowers open, they are white. They are long lasting and showy. Each flower is 2cm to 3cm in diameter. The leaves are initially light green in color, but with time, they turn into dark green. 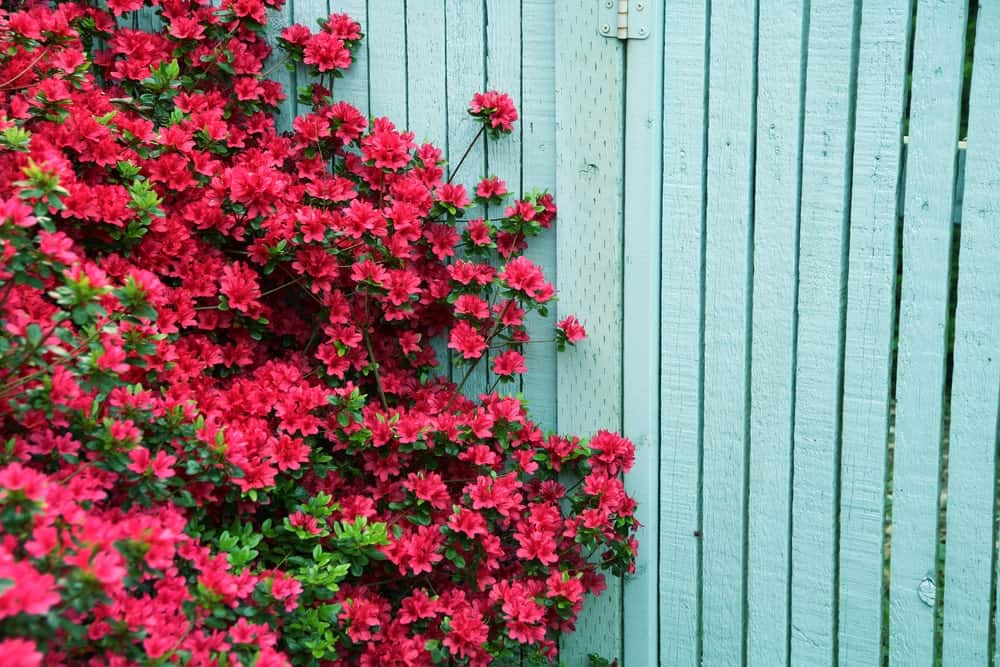 Rhododendron Nova Zembla is an evergreen shrub. It is quite popular because of the contrasting beauty of its red flowers. It grows in an upright habit. They can grow up to 6 to 8 feet tall and 5 to 7 feet wide. The most suitable soil type for Nova Zembla is well-drained, moist, rich in humus and acidic. This makes them easy to grow.

The leaves of Nova Zembla are thick and dark green in color. The flowers are produced in round, fairly large trusses. They are trumpet-shaped and found in solitary. 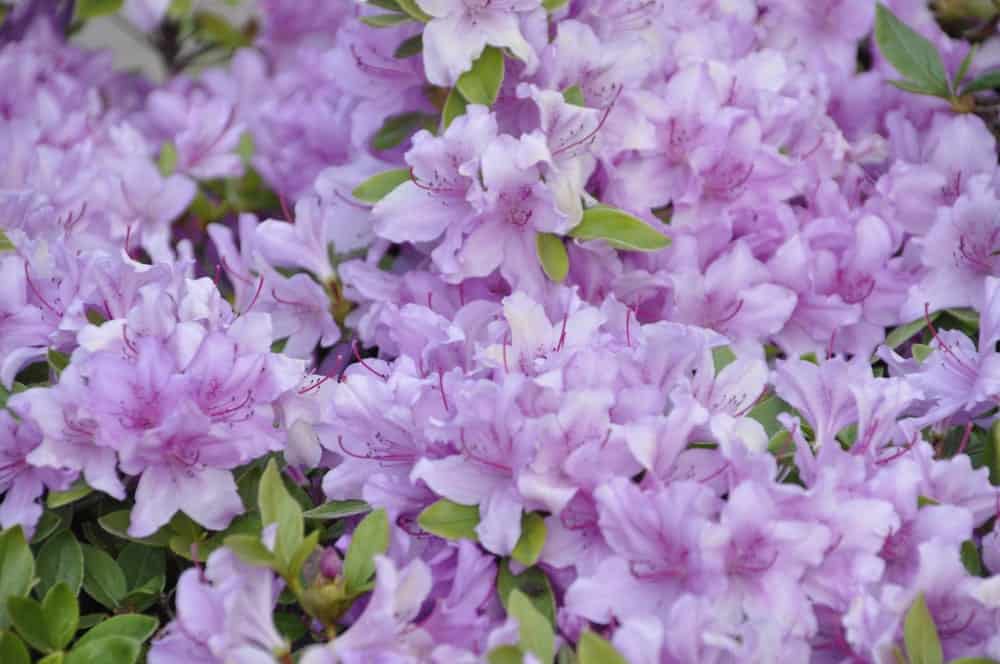 Rhododendron Black Satin is an evergreen, semi-erect shrub. The flowers are abundant, showy and vivid. They are small plants that can grow up to a height of 3 to 6 feet. They grow best in well-drained, evenly moist, acidic soil. The flowers are bell-shaped, deep rose pink in color with shiny coal-black winter foliage. The leaves are small and dense.

Return to all popular flowers