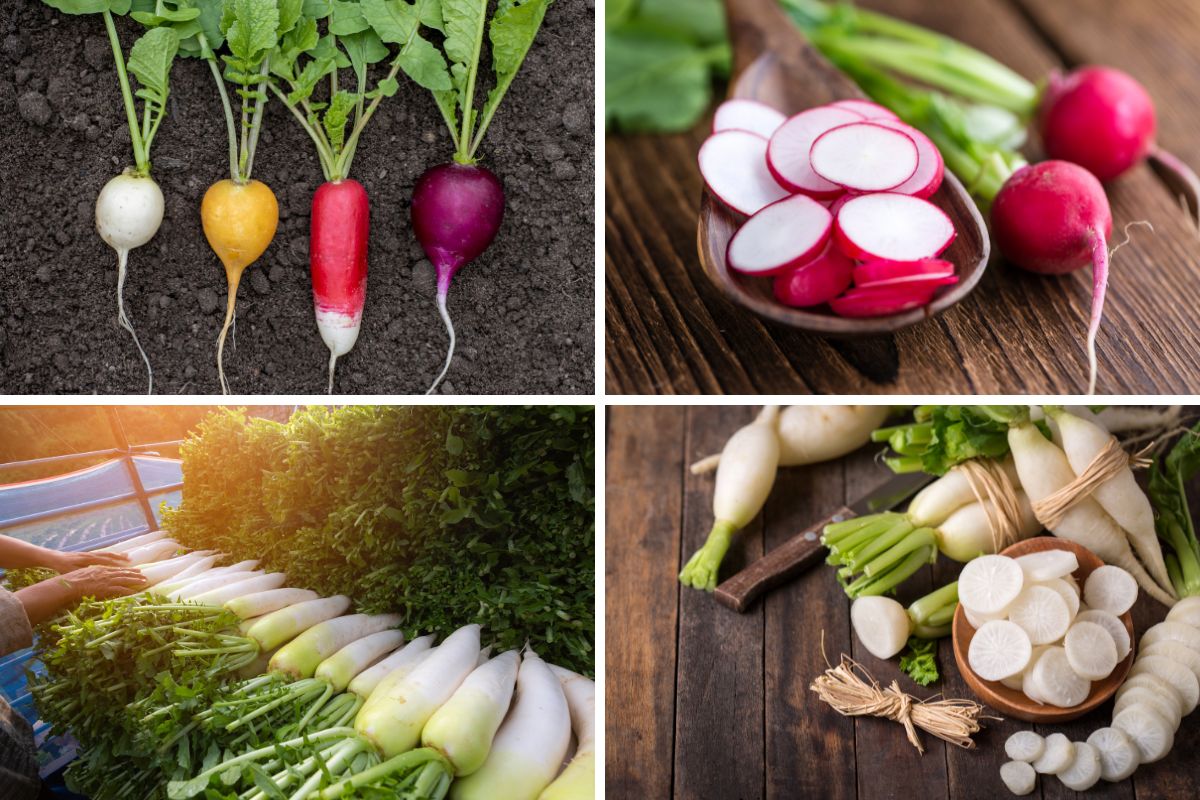 The first written record of the radish dates back to the 3rd century B.C. Its name comes from the Latin word radix which means “root.”

Radishes make up roughly two percent of the world’s vegetable production with about seven million tons of radishes produced each year. Americans alone consume 400 million pounds of radishes in a year.

Below you will find all radish varieties including pictures and facts.

Related: Ladybugs are Good for the Garden | Food Preservation | Types of Condiments 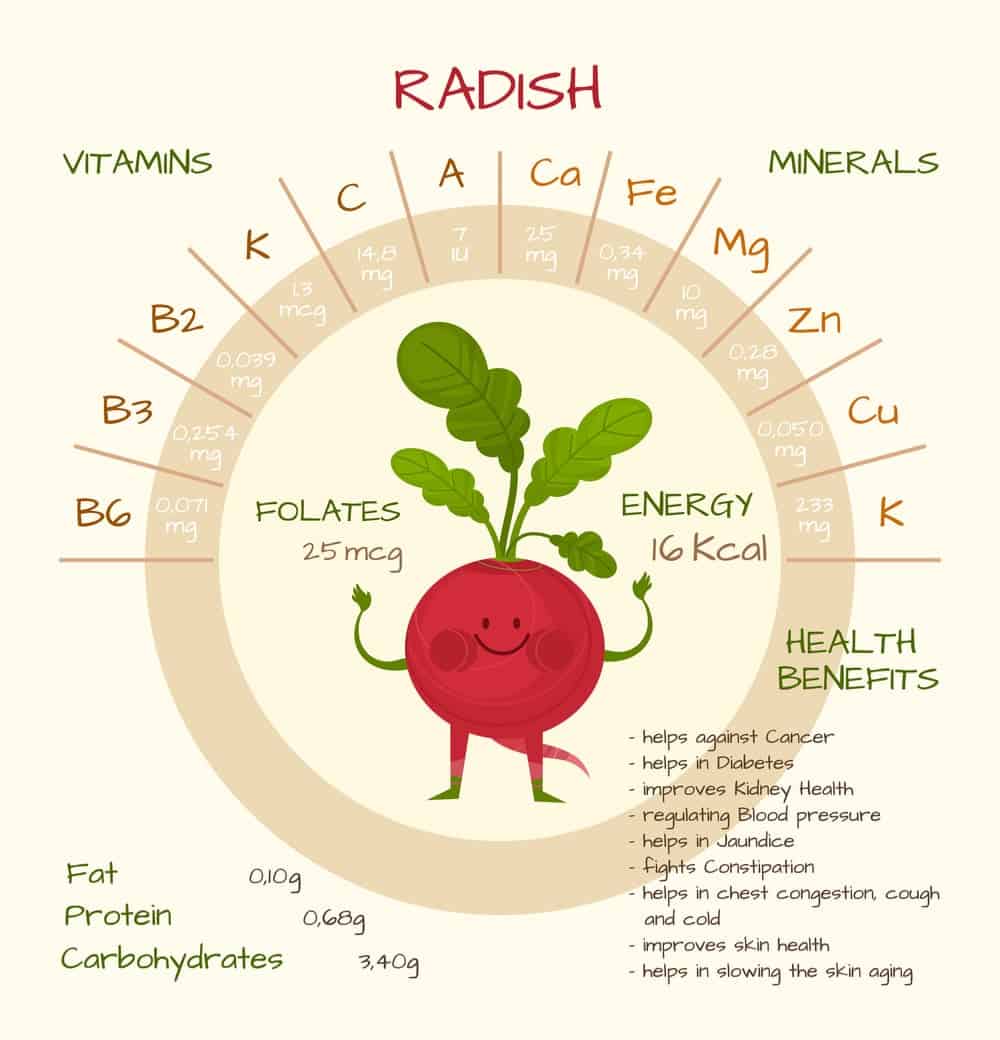 Different Types of Radishes with Pictures 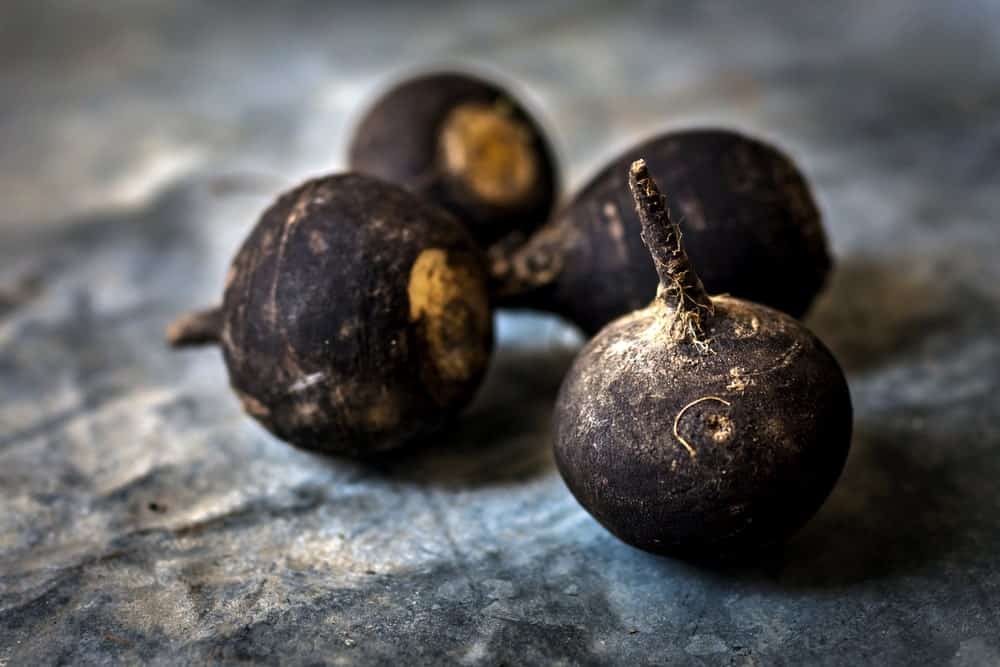 Black Spanish radishes are very round and have coal-black skins and flesh that is pure white in color. 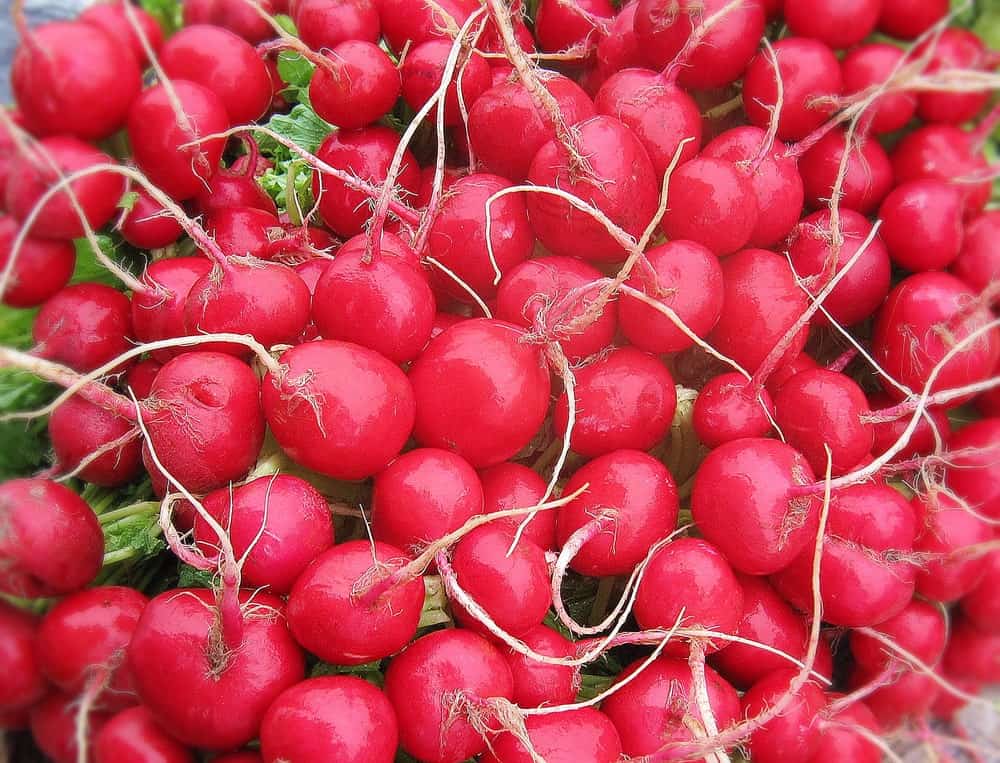 The Cherry Belle radish is the round, red type often found in grocery stores, and it is a perfect addition to salads and many other dishes. 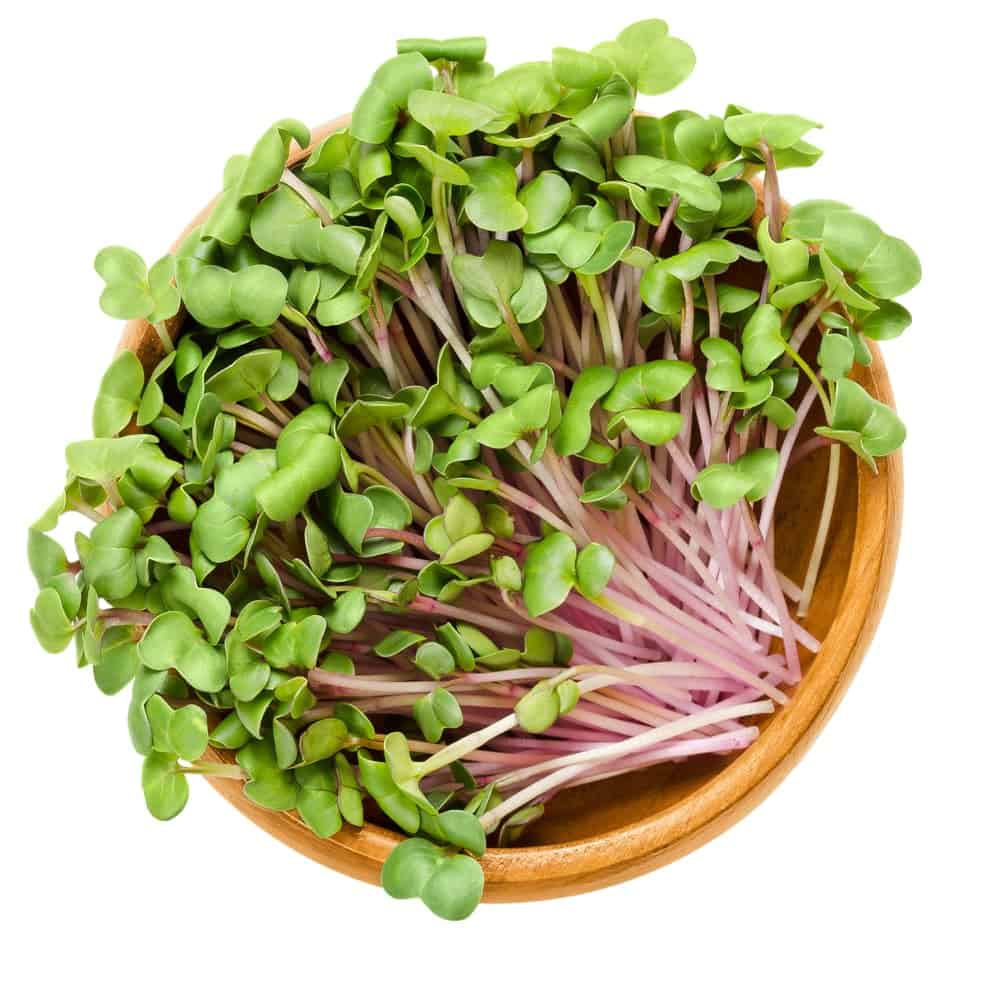 China Rose is one of the oldest types of radishes and is also very hardy. It has roots that get up to five inches in length and it has a nice rose color. It is also easy to grow and does best in mild climates. 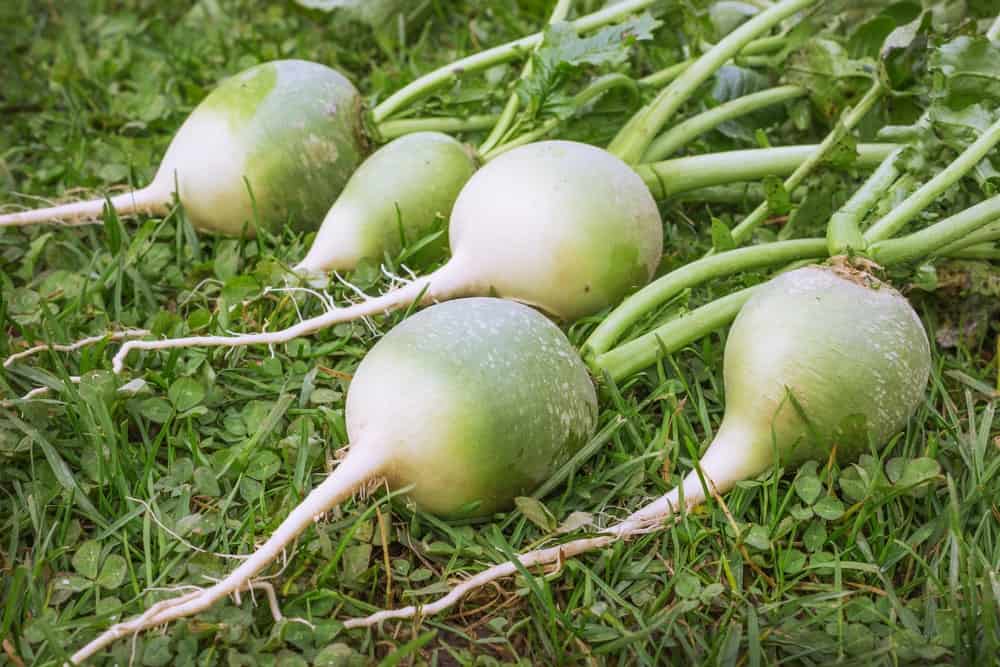 These radishes are also called Qinluobo radishes, and they are an heirloom variety with lime-green skin and lime-green flesh. 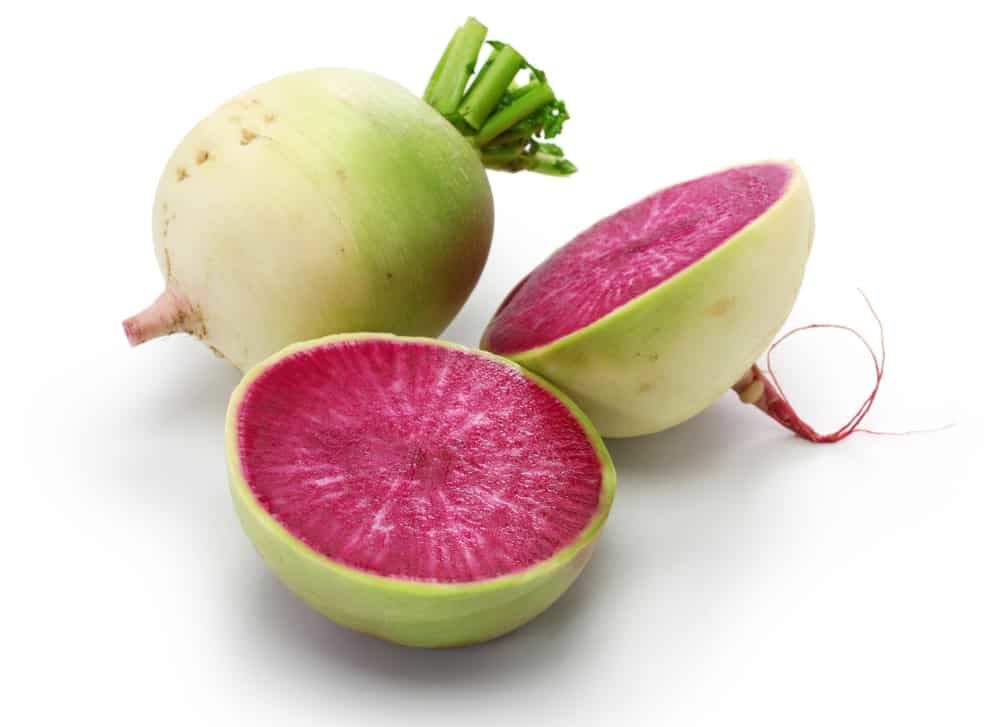 This type of radish has a whitish-green skin and red flesh, and it gets up to roughly four inches in diameter. It is crispy and sweet and goes great in both stir-fry dishes and various types of salads.

The thing that makes this radish unique is its bright-green color, which you can find both inside and outside of the radish. They originated in North China and are often sliced thin and served at tea parties in places such as Beijing. They are a beautiful green color and tasty as well. 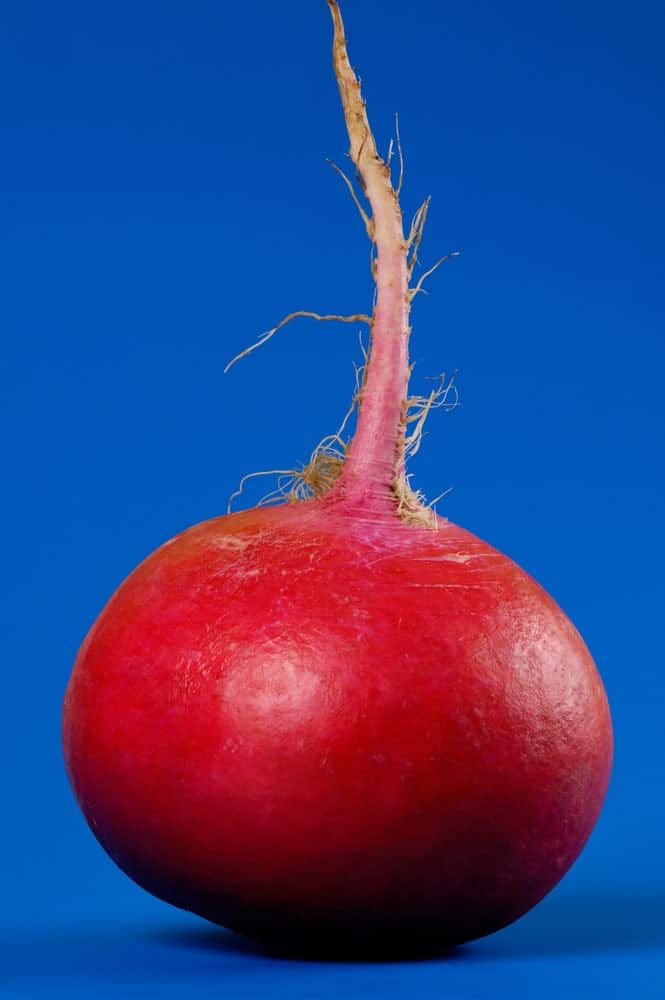 With an average diameter of 1.5 inches, the Crimson Giant radish is bright red in color and can average over six inches in height. They mature in roughly 30 days and have a mild crispy taste and globe-shaped roots. 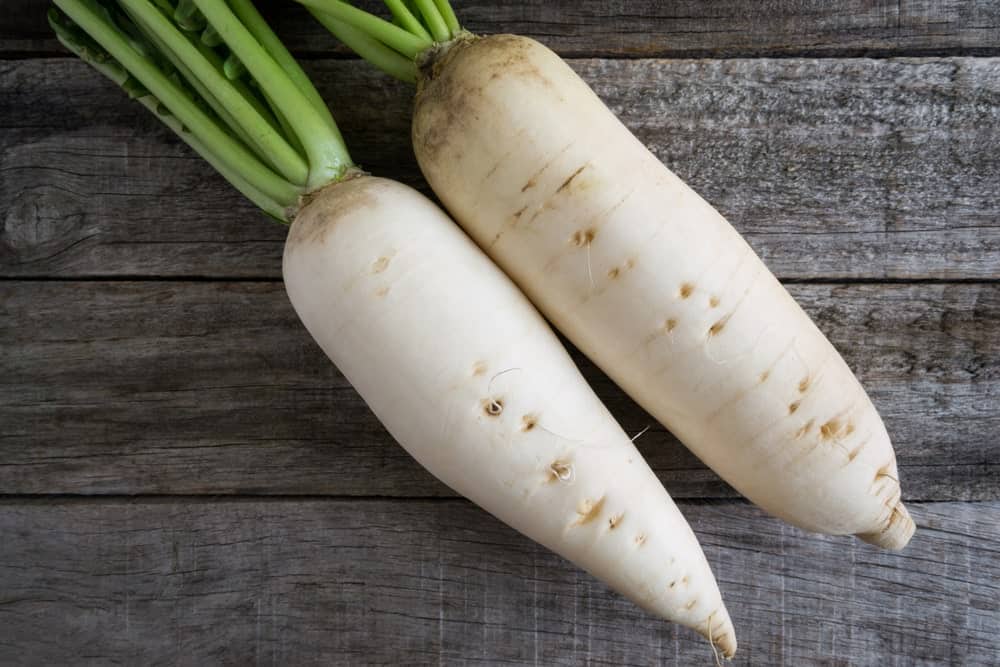 There is a reason for the name given to this radish because it can get up to 18 inches in length and three inches in diameter. Although usually cooked, Daikon Long White radishes are also excellent eaten raw and placed in salads, and their look can resemble a whitish-colored eggplant.

In less than three weeks, you can harvest these abundant types of radishes because they mature in roughly 18 days. They are round to cylindrical in shape and are red with white tips. Their taste is juicy and their texture is crispy, and they are easy to grow in most locations.

This type of radish has red skin, white flesh, and a tender and juicy flavor. Early Scarlet Gold is an heirloom variety with a round shape and a very crispy texture. 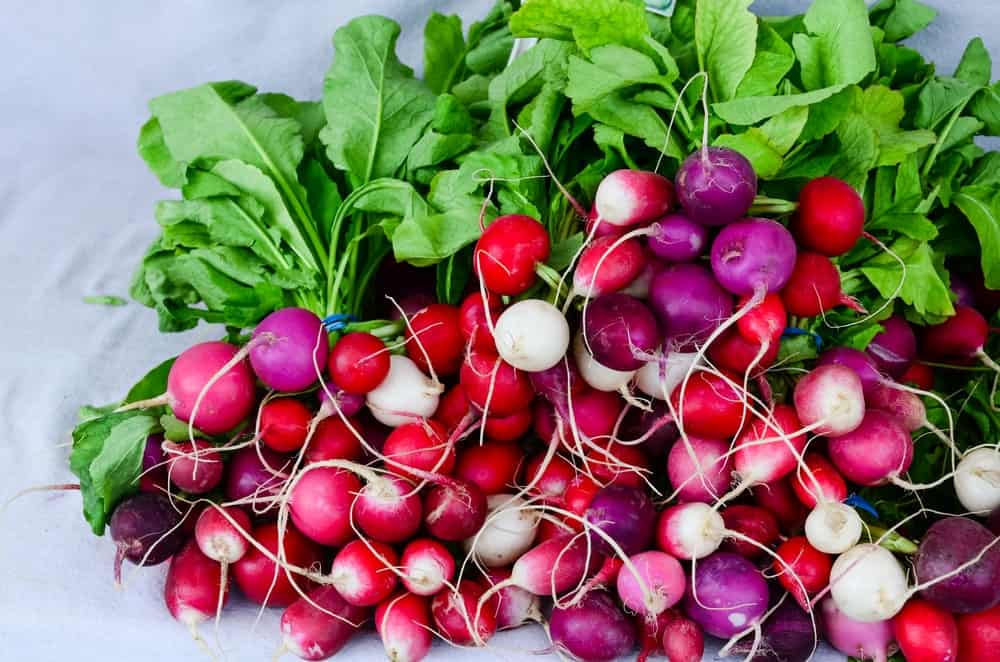 Easter Egg radishes come in a variety of colors, including pink, red, white, or purple, and it looks and tastes best when it’s cut very thin and added to dishes such as salads. They look just as good as they taste.

This radish is oblong shaped and has a bright red top half and white bottom half. They are sweet, but mild and have a delicate texture and flavor. 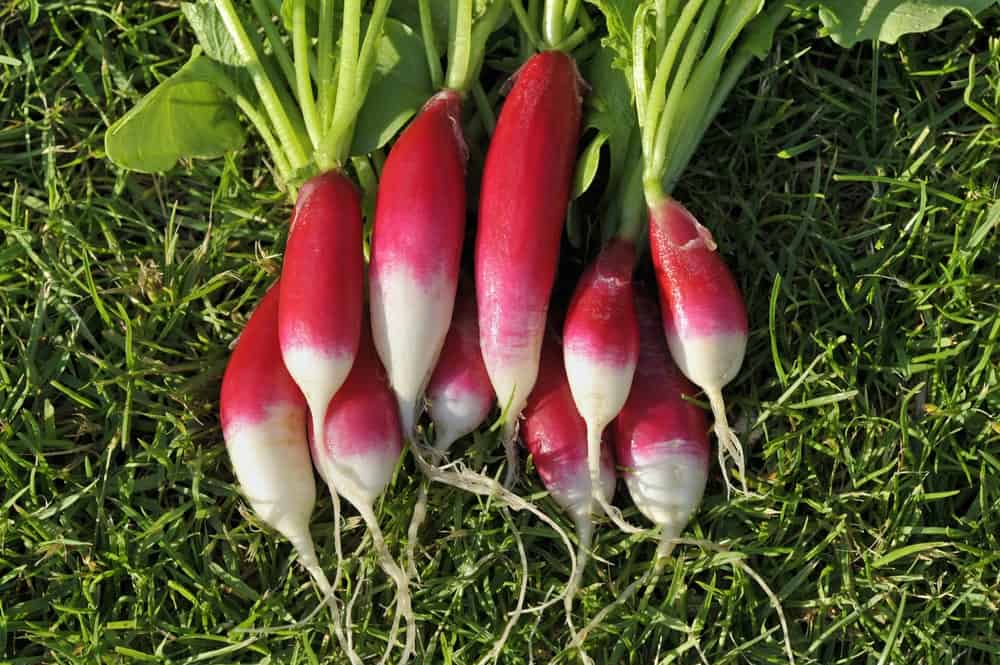 The French Breakfast radish has an extra crunchy and mild flavor. They also have a slightly pungent flavor and can be eaten either raw or cooked, and they are red and white in color.

French Dressing radishes are long and wide, roughly two inches in length and ¾ inch in width. It is a red radish with a white tip, and its flesh is pure white in color. It is zesty and peppery in flavor, and it is ready to be harvested in roughly 24 days.

With bright-red skin and snow-white flesh, this type of radish is mild and crispy, and it matures in 30 days. It can also get up to 14 inches in length, and its shape is cylindrical and somewhat oblong. It often looks similar to a carrot and has a slightly pungent flavor.

These radishes get up to two inches in diameter and have a bright-red color and delicious taste. An heirloom variety of Italy, the Giant of Sicily is easy to grow and matures very early.

Also called the Misato Green radish, this type of radish is green both inside and out, and it has a mild flesh, but skin that is uniquely spicy in taste. 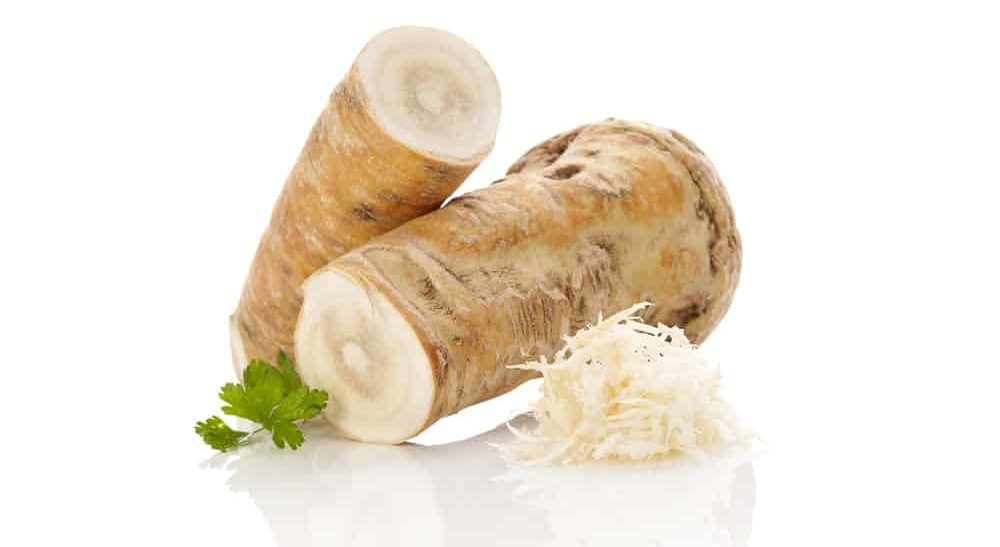 Although some people do not realize it, horseradish is a type of radish, and it is pungent and bright, without the bitter aftertaste that is sometimes found when you buy horseradish in a jar. Horseradish is harvested in the fall and can be stored all winter long, and it spices up a variety of meat dishes and stews.

This radish has very round roots and a deep-purple color. They mature in roughly 35 days, and they have a firm, crisp texture. They also have a contrasting white flesh, and they are both easy to grow and flavorful.

This type of radish has a sharp, pepper-like taste and matures in roughly 30 days. They have a bright-red skin and flesh that is white, and they are crispy, sweet, and mild all at the same time.

This is an heirloom variety that dates back to the late 1800s, and they have beige skin and white flesh. They usually reach the size of golf balls, and their taste is both mild and crispy. They also mature early, in roughly 30 days, and people love them. 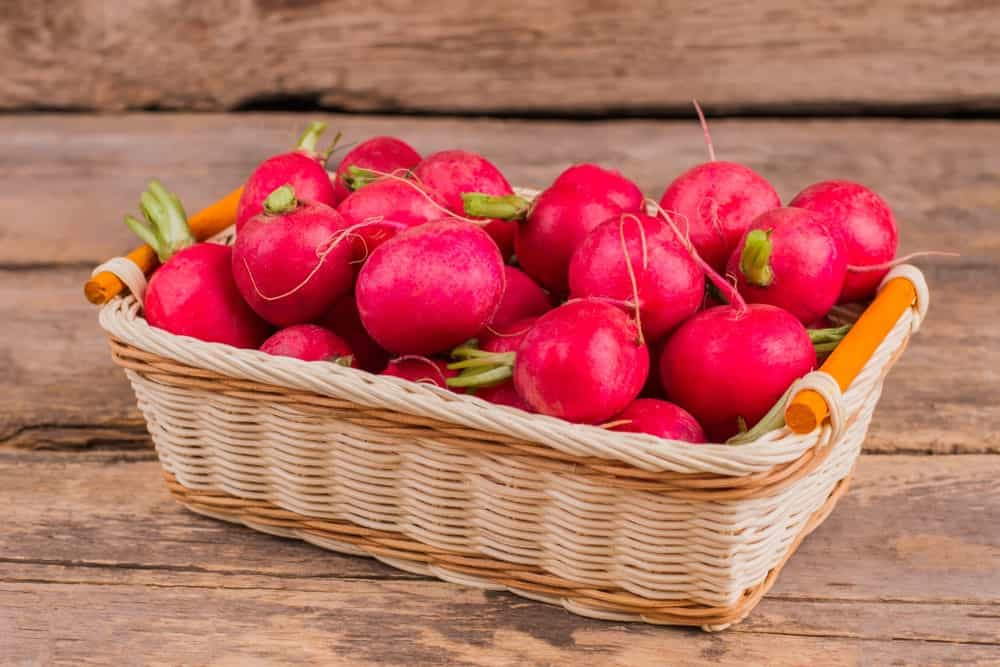 The Pink Beauty radish is fairly rare but has beautiful rose-pink skin and a crispy and yummy sweet taste. A unique variety of radish, the Pink Beauty matures in less than 30 days, so you won’t have to wait too long to try them out. 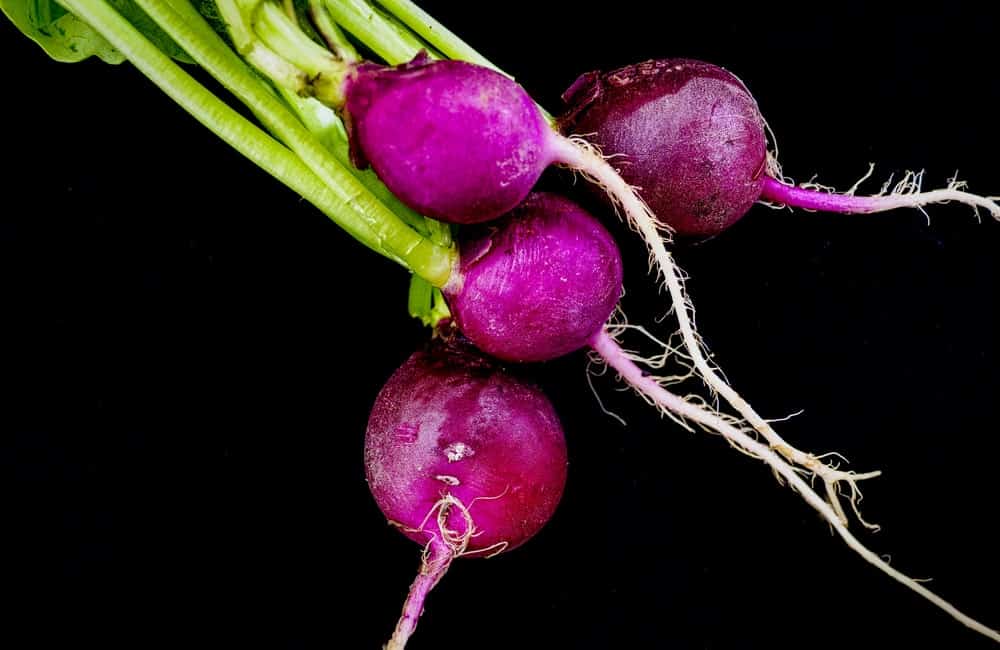 With deep-purple skin and bright-white flesh, this type of radish is as attractive as it is tasty and sweet. It matures in roughly 28 days and is very easy to grow. It also gets to approximately 1.5 inches in diameter and has flesh that doesn’t get pithy.

The Red Emperor Hybrid radish has bright-red skin and a bright-white interior, and they mature in roughly 30 days. Their taste is mild and crispy and has a slight pepper-like flavor as well.

This type of radish has a wonderfully sweet and mild flavor, and it is also one of the biggest radishes in existence. In fact, the Sakurajima Mammoth radish is known to weigh up to 100 pounds when it’s fully mature, making it quite an eye-catching and tasty vegetable. 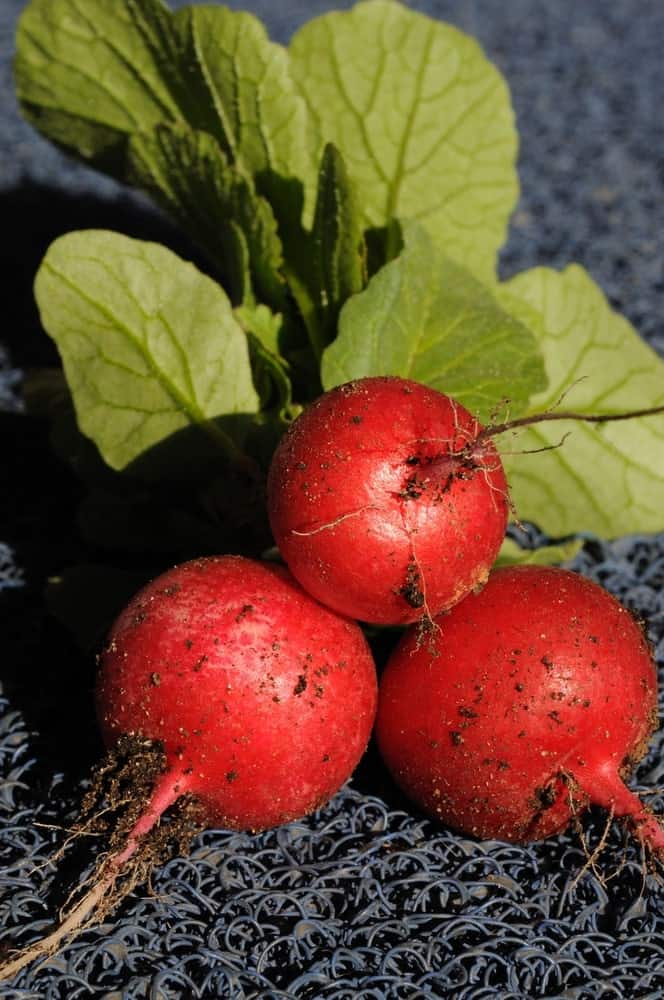 This is a European variety of radish and is both attractive and productive. Maturing in just 18 days, the Saxa 2 radish is smooth and round, bright red in color, and it is crispy and delicious.

Completely red both inside and out, this type of radish is perfect for salads and for pickling purposes, and it is easy to grow, especially if you live in a cool climate. It is a long, slender radish with a sweet taste and lots of vitamins and antioxidants.

Instead of an edible root like most radishes, this radish has bean-like seed pods which are edible. They are a delicacy in places such as India, and they have been known to grow up to 14 inches in length. They are easy to grow and, therefore, recommended for beginning gardeners, and they offer both taste and uniqueness. 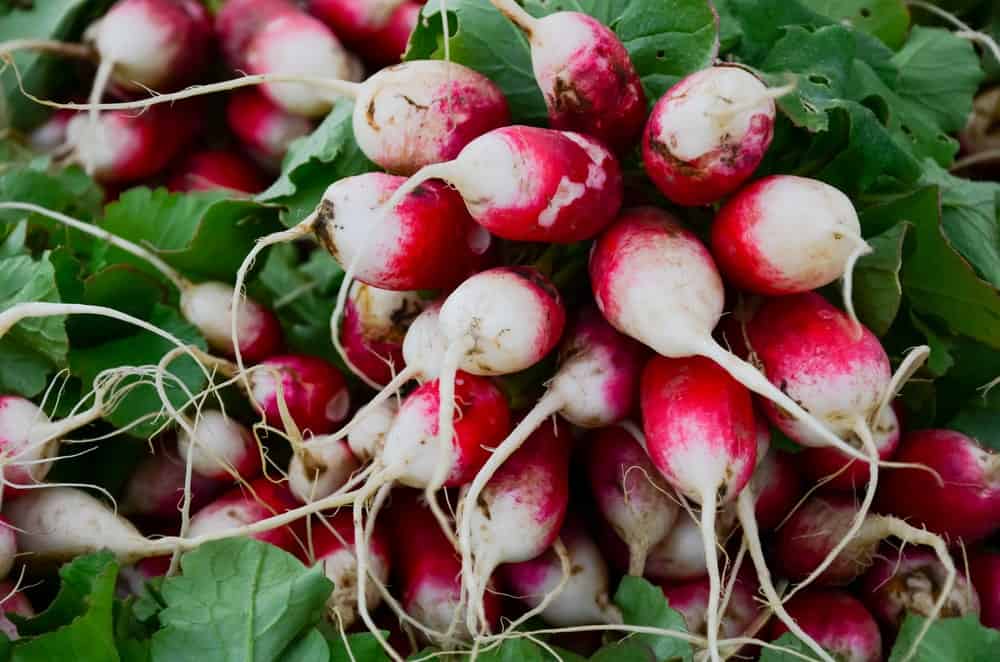 Sparkler radishes are very round and all white on the inside. The outside of the radish is red with a white tip, making for a very unique looking and tasty vegetable.

These radishes look more like a long carrot. They get up to 12 inches in length and they are white on both the outside and the inside. They are an Asian variety that matures in roughly 45 days, and they are crispy and mild in taste. 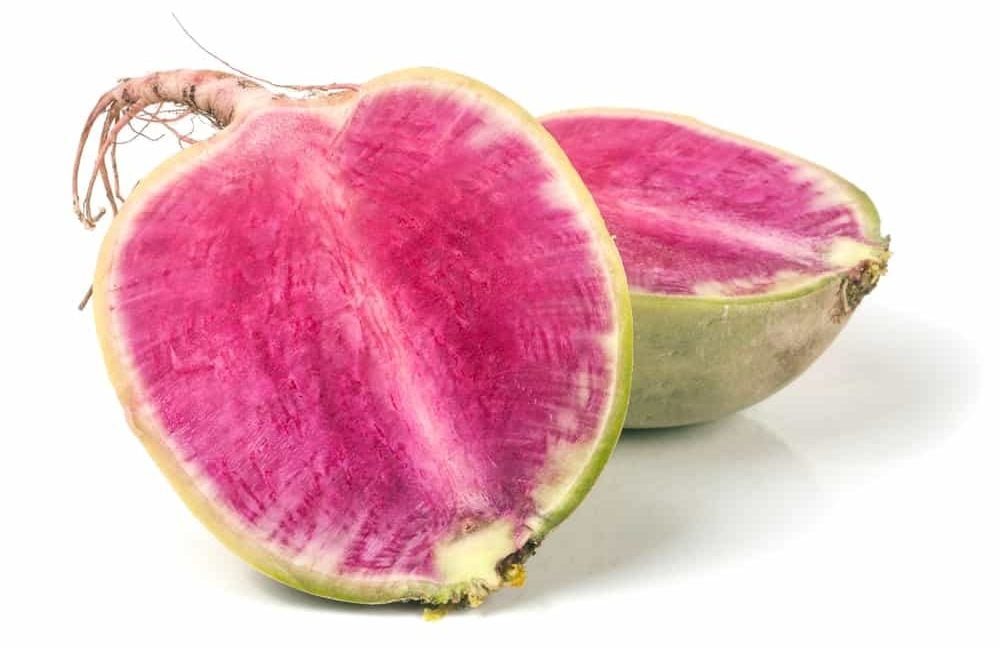 This type of radish is small and white in color both inside and out. It is very round and has a juicy, sweet flavor.

These radishes are white on both the inside and outside of the vegetable. Their taste is both mild and spicy, making them very versatile indeed. 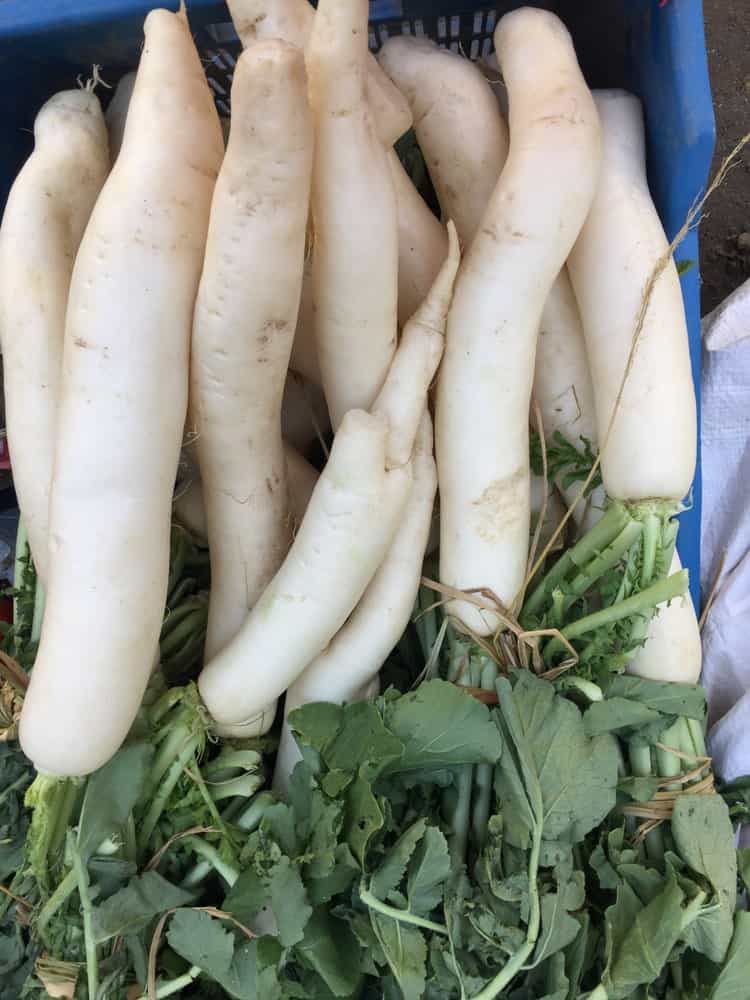 The White Icicle radish is a large vegetable, getting up to eight inches in length, and it has a very pungent flavor and bright white color.

The word zlada means “gold” in Russian, and that’s what color these radishes are. They are silky and a bit on the spicy side and they are very easy to grow, usually maturing in roughly 30 days.