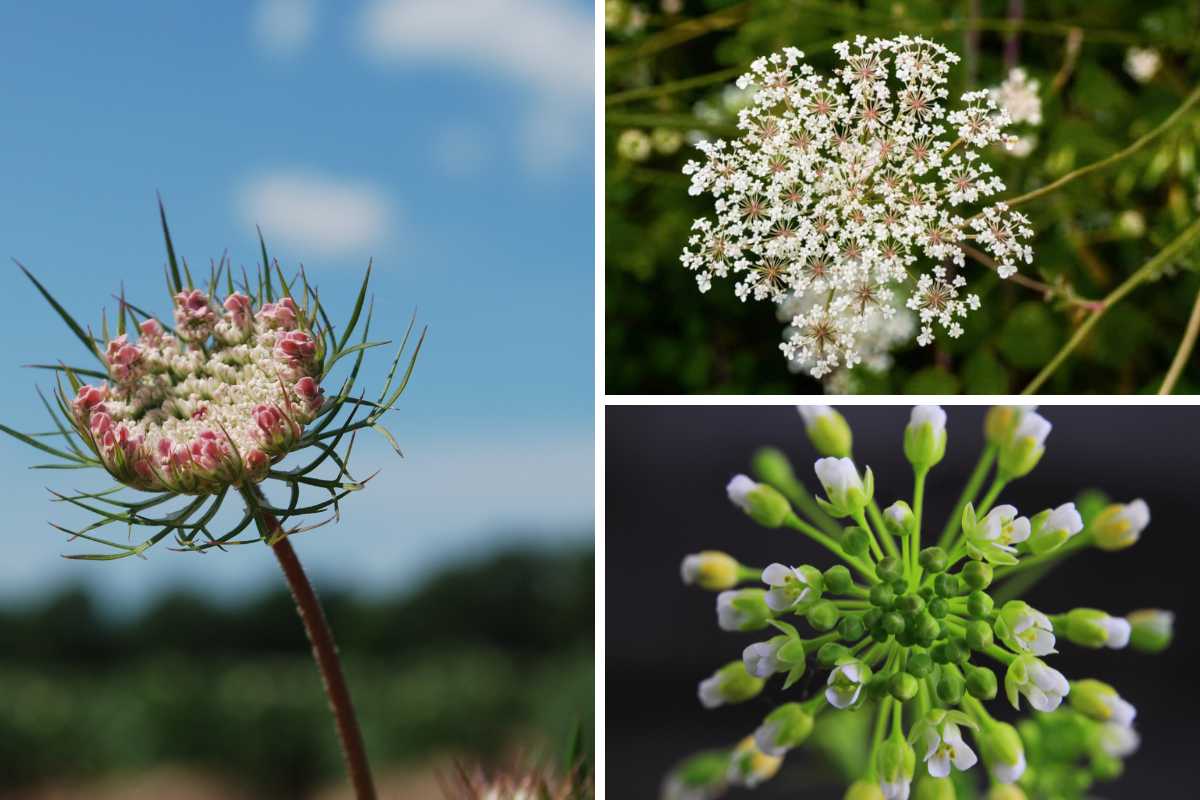 Be it in salads, cakes, juice or simply on their own, everyone loves to eat carrots but are you aware of what a carrot plant or carrot flowers look like? Have you ever tried harvesting carrots in your own backyard? Or better yet have you ever thought about planting them for ornamental purpose?

While it is not really the flower of the edible carrots that you consume on a typical day, Queen Anne’s Lace is a truly fascinating species of flowers that are often used in floral decorations or even nurtured by skilled gardeners to give their backyard a unique touch.

Whether you are a garden enthusiast looking for new plants to add to your own collection or just a regular person who’s curious to explore more of the gifts provided by mother earth, you have come to just the right place.

Check out our detailed article covering everything you need to know about the natural beauty that Queen Anne’s Lace truly is.

From the plant’s background information and related types to their growth, maintenance and more – we take you through various aspects of this lesser-known garden variety. Read on to find out more.

What is Queen Anne’s Lace? 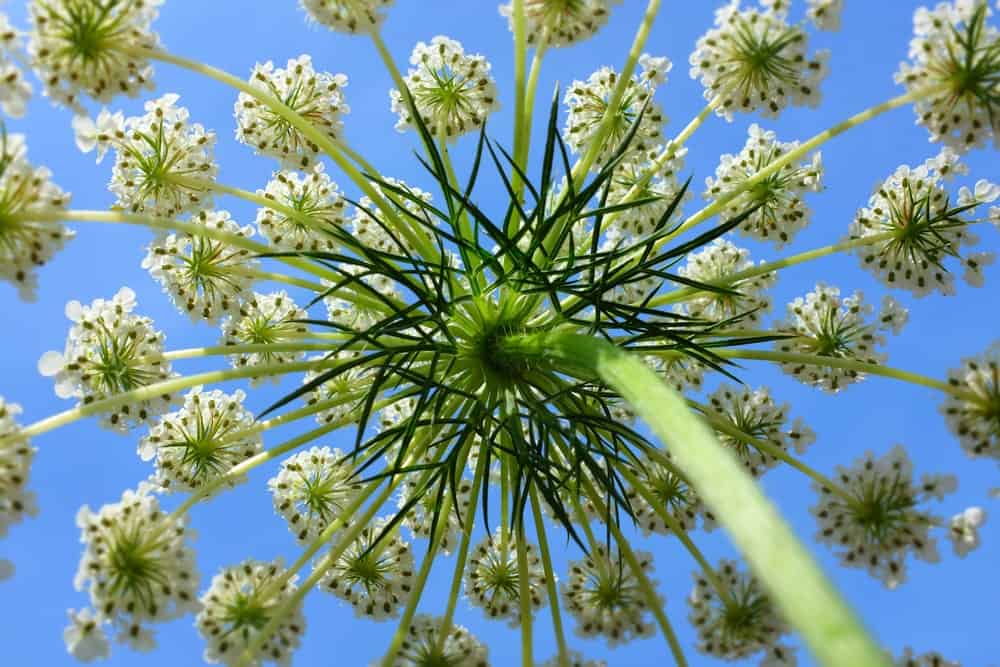 Queen Anne’s Lace or Wild Carrot is a white flowering plant that belongs to the Apiaceae family – i.e., the same family that also produces edible carrots we so commonly use.

It is a biennial herb which means that the plant produces blossoms in its second year of life and then withers away. Its root not only resembles a carrot but also produces a carrot-like smell when crushed.

Plus, the taproot of Queen Anne’s Lace has often been consumed as a food item in the past whereas it is still sometimes used for medicinal purposes and other similar purposes.

This species is native to the temperate regions of Southwest Asia and Europe but has spread to parts of North America and Australia as well.

Daucus carota was introduced in the United States as far back as the 16th Century (or even earlier) and is a common sight in various wild areas of Illinois and Minnesota.

Be it thickets, prairies, meadows, abandoned fields or vacant lots; you can easily spot Queen Anne’s Lace growing in vast numbers in such places.

You will also find these delicate white flowers blooming beside railway tracks, highways and even in waste areas. Visit the countryside, and you are likely to see Queen Anne’s Lace lining the fences of many houses and cottages.

Queen Anne’s Lace is also known by other names such as Bird’s Nest and Bishop’s Lace.

Many people confuse Wild Carrot, Bird’s Nest, and Bishop’s Lace to be a type of Queen Anne’s Lace. In reality, they are the different names given to the same plant.

However, expert gardeners and even florists recognize Queen Anne’s Lace as one and only one distinct plant while other’s like Ammi Majus and so on are said to be its relatives. Read on for a clearer explanation. 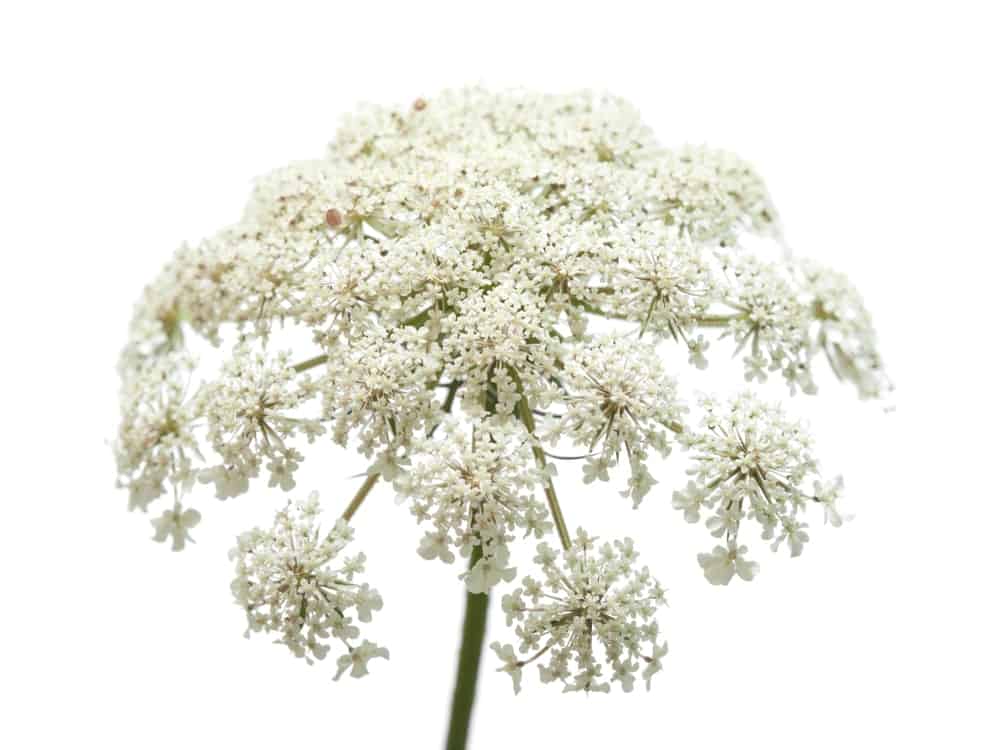 Originating from Europe, the species is commonly found in Michigan, Ohio, and West Virginia as well Minnesota and Illinois where it is considered to be a noxious weed.

However, in various other parts of North America, the plant is considered to be an exotic species and often grown in a controlled environment for ornamental uses. It requires partial shade and relatively dry soil to flourish.

Queen Anne’s Lace is a very hardy species which means that it can thrive in various climate conditions although it generally prefers a dry environment.

This plant features pristine white flowers that bloom from June to September. The flowers grow in flat clusters known as umbels (an umbel is a flower composed of several ‘umbellets’ at the end of short flower stalks that are joined together at the base).

The small white flower heads that spread upwards from the common point closely resemble the shape of an upturned umbrella, hence, the name ‘umbel.’

Each cluster or umbel (about 2-5 inches across) consists of 20 to 30 mini flowers that each have five petals and are as minute as about an eighth of an inch. The petals of the outer umbellets are slightly larger than those on the inner side.

Also, these large outer petals are often ‘pinched’ at the tip giving the blossom a really fancier finish. More often than not, you will find a small dark reddish-purple umbellet in the middle of each cluster.

The stunning, delicate white flowers are supported by equally delicate and stunning bracts at the base. These are small leaves or ‘scales’ at the bottom of each umbel that comprise of long and narrow segments of lively greens.

Further down the stalk, there are compounded fern-like leaves that each measure up to 10 inches long and are almost half as wide.

These distinctive leaves are larger near the bottom of the plant and gradually shrink in size near the top beside the umbels.

This exquisite arrangement of greens perfectly balances the exclusive white flowers whereas the hairy, fuzzy stems further accentuate the beauty that Queen Anne’s Lace truly is. However, this dazzling beauty has more to offer.

When the flowers begin to mature into seeds, you will notice the umbels fold upwards, creating a small cage-like structure that holds the fruit in the center.

Gradually, this protective shell turns into a hard, ribbed seed with spikes covering the outer surface. You will notice a spectrum of colors as the flowers change shades from white to purplish-green before turning into stiff brown seeds.

This hairy/ spiky structure helps in seed dispersal by the wind which is why the plant can find new breeding grounds and quickly populate on its own without any external help. 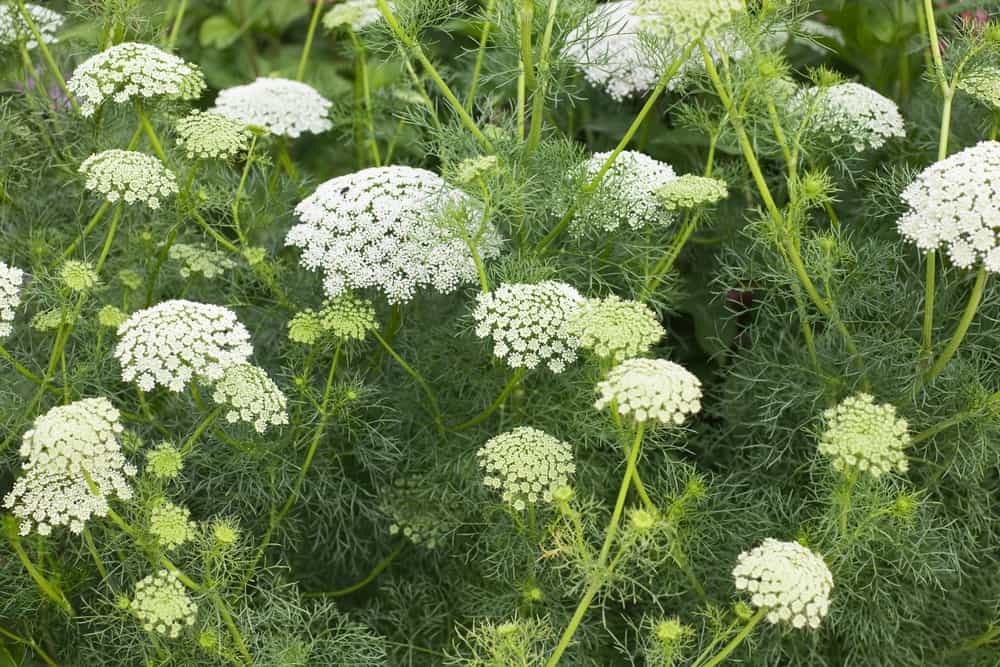 It belongs to the same carrot family that True Queen Anne’s Lace belongs to, i.e., Apiaceae and is often confused with the same because of the similarity between the two species.

Ammi majus originated from the Nile River Valley thousands of years ago. Today, it is commonly grown in home gardens for decoration while its cultivars are frequently spotted in various florist shops.

With flowers growing in umbels, pretty much in the same style as those of True Queen Anne’s Lace, Ammi majus is also a fine choice to consider if you want to add some elegance and style in your backyard.

However, the species is void of the rather ostentatious bracts that are a characteristic of Wild Carrot or True Queen Anne’s Lace only.

You might be surprised to know that Egyptians used the juice of Ammi majus in around 2000 B.C. to ‘treat’ people with vitiligo.

However, according to research and modern science, an excess of the photosynthesizing agents in Ammi majus can not only worsen the condition but also cause severe skin inflammation – which is why you shouldn’t consider experimenting with the plant sap.

Still, Ammi majus is often cultivated for the extractions of certain chemicals that are used to treat other skin diseases.

Native to Europe and Asia, this plant is also spotted in other parts of the world such as northwestern Africa, Mediterranean regions, as well as certain high-altitude parts of the United States.

Wild Chervil, belongs to the same carrot family, Apiaceae, that the above two species of flowering plants belong to, but is closer to the subgenus of parsley, hogweed, and hemlock.

Blooming throughout spring and early summer, this plant also produces white or greenish-white delicate flowers that are consist of several minuscule florets.

Cow Parsley grows rather aggressively and can prove to be quite troublesome for many farmers.

The plant is edible although not a desirable option for humans (unless you are stuck in the wild) due to its unpleasant taste that seems like eating a really bitter carrot.

However, cattle and farm animals don’t usually mind feasting on Cow Parsley, which is how it got its name. But you must note that the plant does resemble poisonous species known as fool’s parsley and poison hemlock.

How to Grow and Maintain Queen Anne’s Lace?

Queen Anne’s Lace typically grows in regions that experience a large number of sunny days and have moderate to low humidity. They thrive best in clay-loam soil that has either a neutral or slightly acidic pH level.

You can choose to grow this species in your home garden if you are looking for a low maintenance plant to add some beauty and style to the place.

However, if you have a carefully thought-out and well-decorated backyard, it might be best to steer clear of Queen Anne’s Lace because the species is highly invasive and can be difficult to get rid of when you want.

The reason behind this is that the plant’s taproot reaches a lot deeper into the soil and can easily grow back again even if you ‘pull’ the plant out from the flowerbed.

If the species has already invaded your garden, then you can dig up each plant using a spade.

Loosen the soil around the main stem and then pull the entire plant out. If there are any seeds on the stalks, tightly seal the uprooted plant in a bag before discarding it.

A dilute solution of glyphosate can be spread on the affected patches to kill any remnants of the invader.

However, this can also affect other plants so make sure that you consult relevant expert professionals before treating the soil with any chemicals. 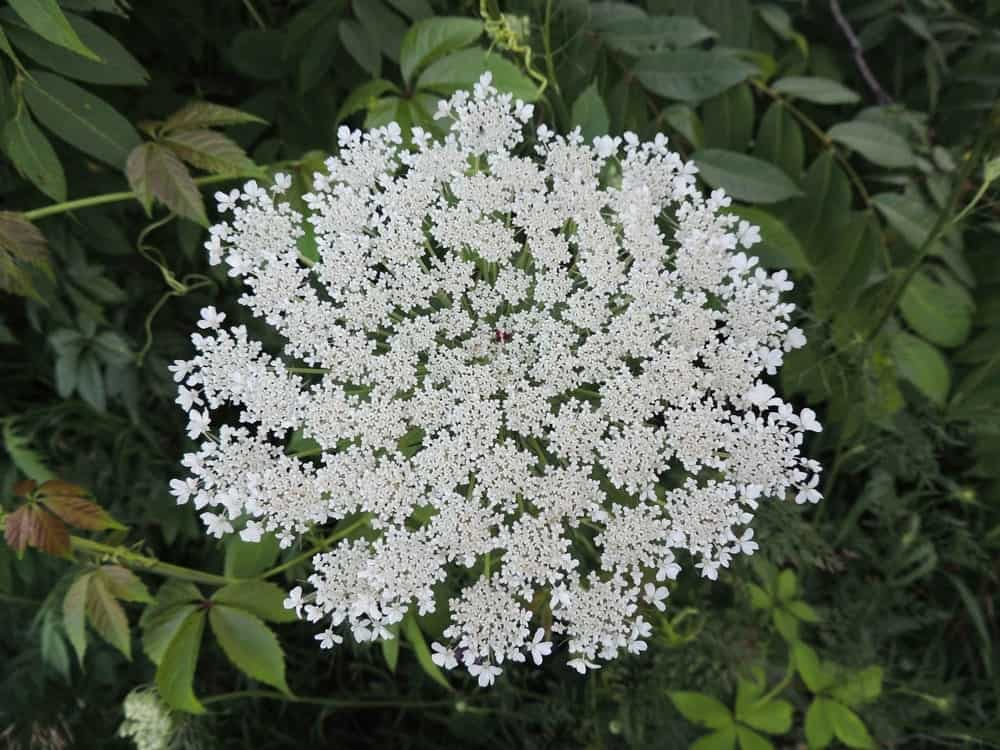 If you are scratching your head in confusion as to where the plant got its strange name from, then you are not alone.

Legend has it that the species was named after Queen Anne of England (1665-1714) who pricked her finger one day while sewing a white lace.

When the drop of blood fell on the frail lace that she was holding, it resembled the flower of Daucus carota which features frail white flowers often with a dark reddish-

Hopefully, this would have helped you understand this exclusive and unique plant variety better.

Are you up for growing Queen Anne’s Lace in your garden?

Keep a vigilant eye next time you go trekking or hiking in the wild or even when passing by a railroad because you are likely to come across lots of delicate and fancy white Queen Anne’s Lace dancing with the wind.

Return to all flowers here.