Types of pork do not necessarily mean "types of pigs", it's more on meat cut from pigs. To explain it better read this article to know what are the types of pork. 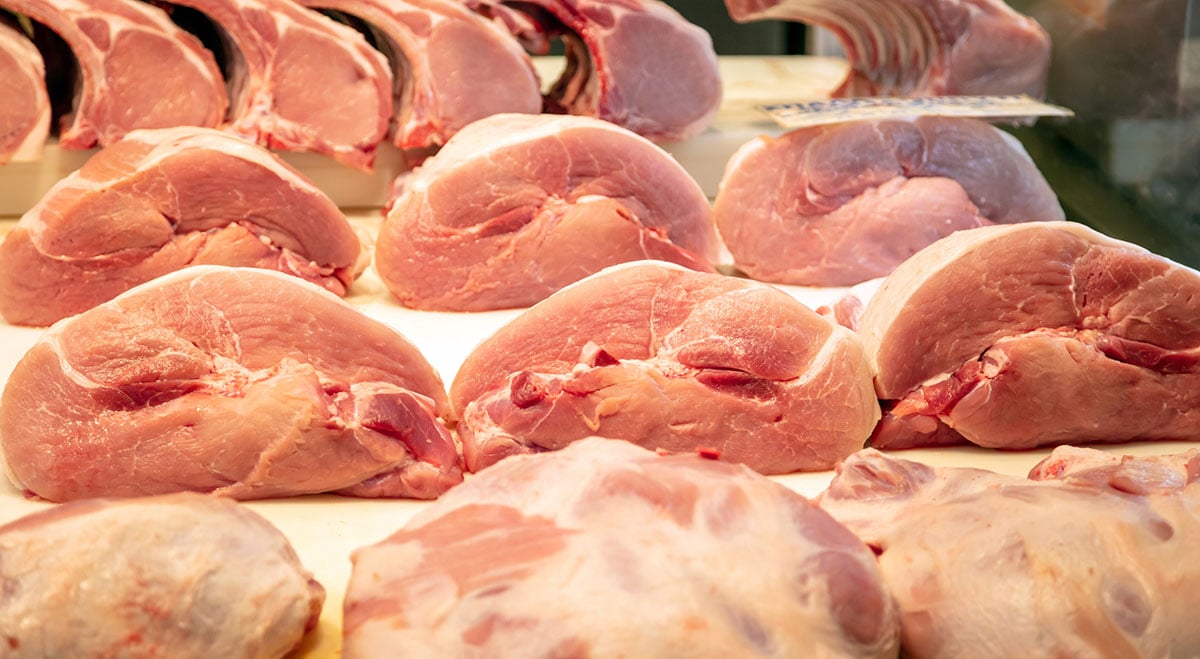 The Etymology of Pig

Pork is the term used to describe the meat derived from pork. The reason why we English people have two names for various species of animals and their flesh dates back to 1066, the year of the Norman conquest of medieval England. In the aftermath of a battle against those who were “filthy English” (the Normans’ characteristically uncharming and careless description of their vanquished foe*), the invaders set themselves up as a ruling class and steadfastly refused to learn to speak Anglo-Saxon, sticking to their native French like odor on garlic.

The English, on the other hand, who may have been anxious to learn the language of their new masters, had little opportunity to do so, as they were signally not invited to the feast-literally. Thus, while serfs farmed pigs, cows, and sheep, the hoity-toity Normans feasted upon pork, beef, and mutton.

The reason I dredge up all this unpleasantness between the French and the English- pardonnez moi-the Normans and Anglo-Saxons, is that to me, ‘types of pork’ necessarily means types of meat cut from pigs, not ‘types of pigs.’ However, knowing that we live in an increasingly cynical and jaded world, I will provide some of the hundreds of breeds of pigs extant today.

There are 12 types of pork: head, jowl, neck, picnic, shoulder, hock, bacon, ribs, loin, back fat, leg ham, and hock. Pork chops come from the loin, while ‘pork butt’ comes from pork shoulder. Ham comes from the hind leg. Spare ribs come from the belly, while pork sausages contain ground pork that is typically taken from the shoulder.

Below, I present some cooking tips for different types of pork. I’ve chosen to deal with those not frequently discussed in cookery cookbooks. 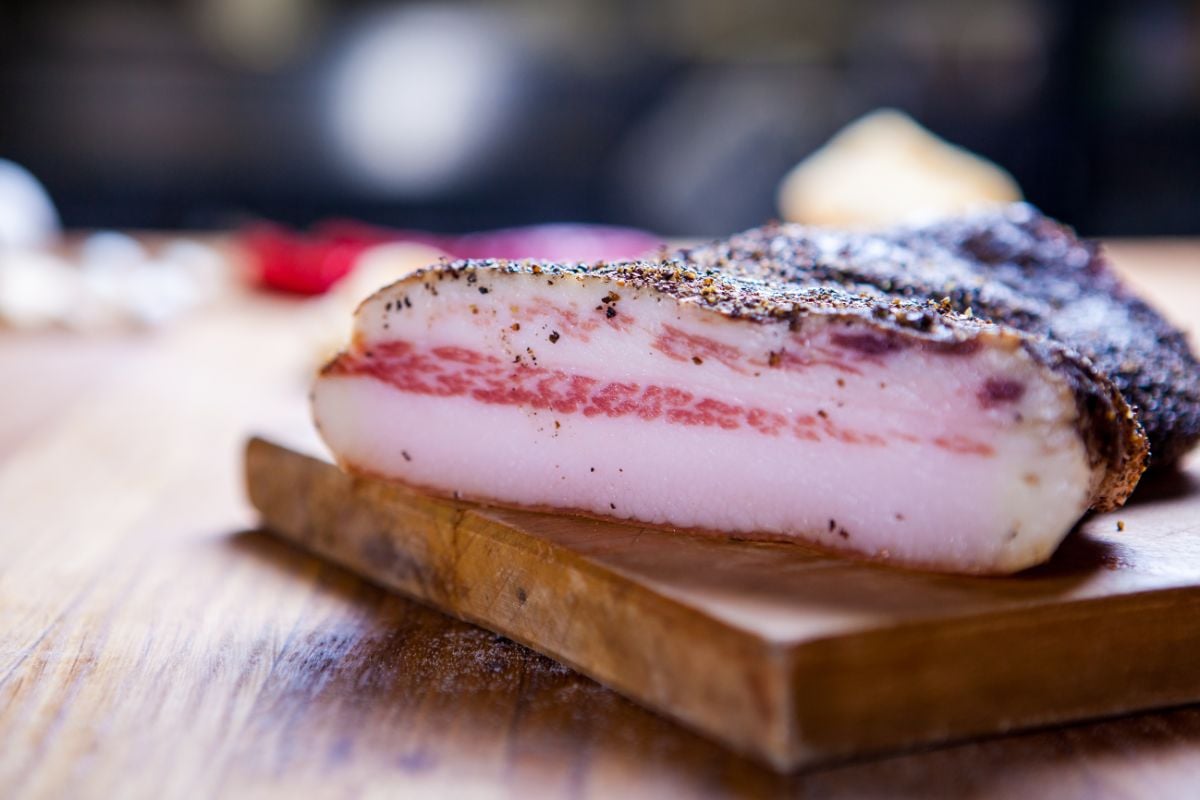 Pig jowl, more commonly called ‘hog jowl’, is something you’ll find in the supermarket when you make the New Year’s Day menu. This is sad. But that’s what it is. I use the word “sad” because it is a food item that can be enjoyed all year long; however, most people do not think about it past the standard New Year’s Day meal.

What is this pig’s cheek of which I speak? Well, it’s bacon. It’s not the bacon you’d imagine; however, it’s still a kind of bacon. It’s the same as the bacon you would normally think it to be. The bacon you usually buy is made from smoked and cured pork belly. Pig jowl bacon is made from cured and smoked pork cheek. Both contain fat-filled sections and meat sections. Conventional bacon doesn’t include the rind or skin, as pig jowl usually does.

You can cut the pig jowl and cook it like bacon because, after all, it is bacon. You can also use it to flavor collard greens, black eye peas, pinto beans, or even butterbeans. It’s incredibly versatile and generally less expensive than regular bacon.

How to Cook Pig Jowl

Because most people outside the South have never even cotton pickin’ heard of, or thought of, cooking this type of pork, I will describe one way to cook pig jowl.

For this recipe, you’ll need one pound of pig jowl that’s been cured and smoked. (If you’re in the market for this kind of pork, you may smoke and cure the pig jowl yourself. (Smoked and cured pig jowl is commonly referred to as ‘Guanciale.‘)

The Process of Cooking Pig Jowl

Serve your cooked pig jowl slices while they are still warm, and enjoy! Boy, I wish I was there with you. 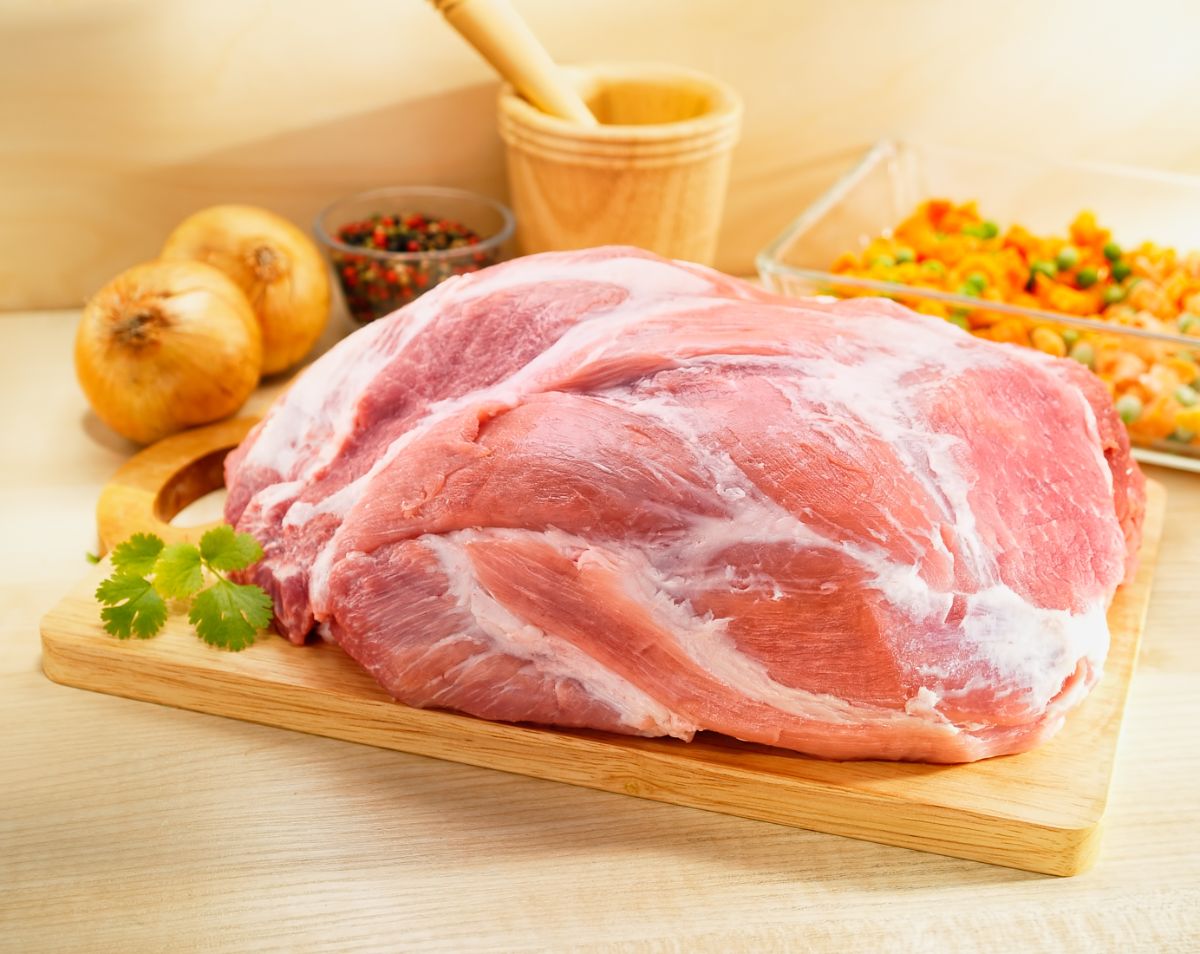 Well, ‘pig picnic,’ aka ‘pork picnic,’ is one of the 12 types of pork cut. Picnic pork shoulder, or picnic pork for short, is pork that is cut from a pig’s shoulder.As a pig’s shoulder is actually its leg, and pigs trot along all four legs, the picnic shoulder has muscles that do a lot of work.

All the moving around gives the shoulder plenty of flavors. It is also a cut that could be described as having a lot of texture. If it is not cooked properly, it may be challenging to cook and tough. However, the correct cooking technique will reveal its fantastic taste in the most delicate ways.

How to Cook Pig Picnic

Like pork butt, picnic shoulder also benefits from prolonged, slow cooking. Along with cutting, it’s good to chop and serve as stewed meat, or in chilis such as green pork chili. Picnic shoulder is also cooked as a whole and later cut into slices, similar to ham. Make sure to keep it moist and covered during cooking for optimal outcomes. Serve it at room temperature, chilled or warm, and tote it along to take your picnic pork to a picnic. Snort. Chuckle.

The head of a pig is becoming more and more commonplace, and it’s important to know what a pig’s head can mean when it comes to cooking. Simply put, it’s anything that’s above the neck. If you buy the head of a pig at the local butcher shop or on the internet, you’ll receive its entirety: ears, snout, and everything else.

The whole head is cleaned and wrapped for removal and will be a stunning spectacle to see. An experienced butcher can quarter the pig’s head to make this unusual piece of meat less intimidating.

How to Cook a Pig’s Head

A pig’s head is typically cooked to make soup, brawn, and stock. For all these, boiling is advised. In case you don’t know, brawn is a cut of pig’s head meat transformed into jelly or terrine. All of the head’s parts are utilized except for the ears, eyes, and brain.

In the case of soups and stocks, simmering for a long time will release the flavor of the pork. After making your stock, use the rest of the pork to make the aforementioned brawn. The ears can then be put aside and then fried or grilled on their own.

What is the required time for cooking a pig’s head? As a rough estimate only, and because pig’s head is best cooked slowly, you’re looking at somewhere between two and four hours. 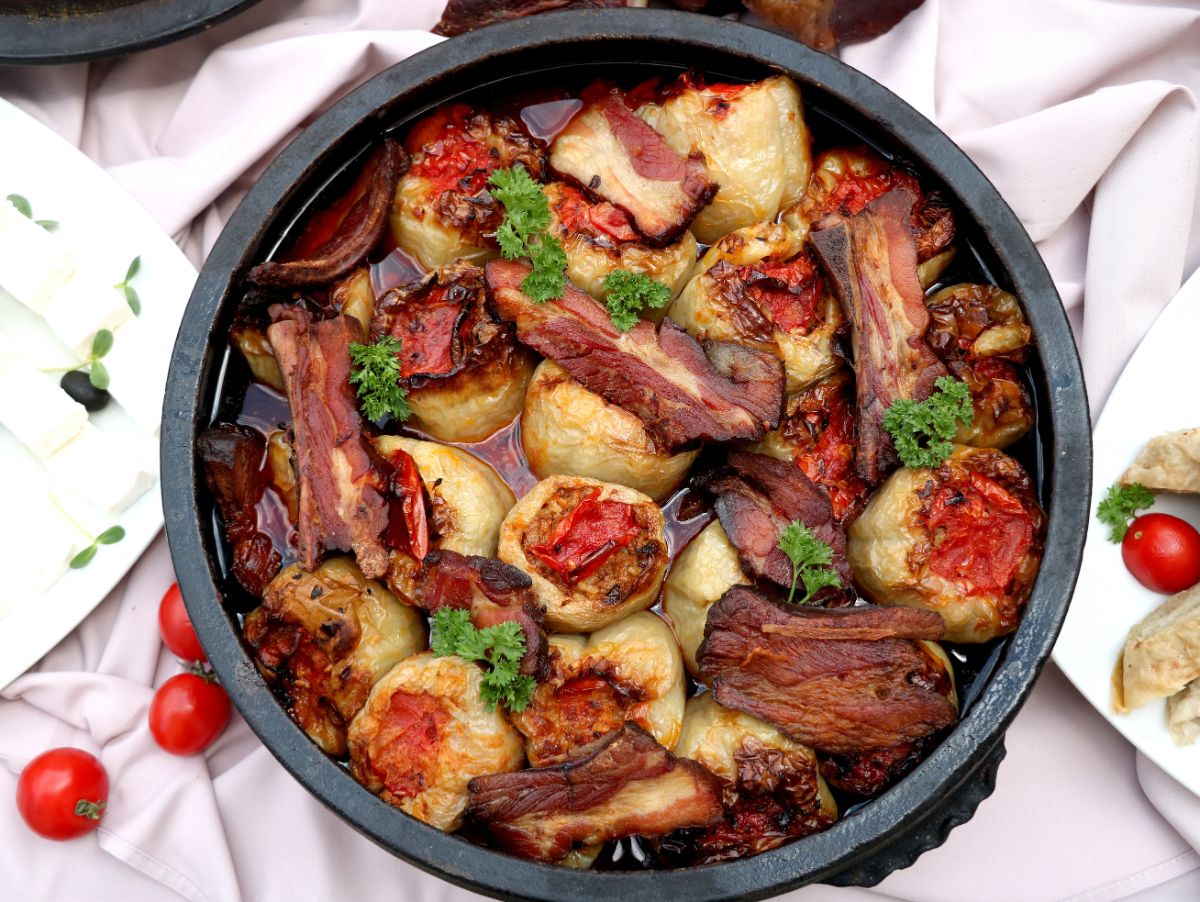 The deliciously marbled meat can be prepared and eaten in various ways: as a whole roast, as sliced pork roasted or grilled (with bone or without), or chopped in woks or casseroles. The layer of fat coating the meat is best left in place to improve your meal’s flavor.

How to Cook the Neck of Pork

It is excellent on grills due to the high content of fat. Don’t use oil when marinating. Sweet and sour can be great complements, including apple, plum, orange, ginger, and tamarind, etc.

You can also use this cut as a raw material to make pulled pork. Cook for approximately eight hours at a temperature that stays below boiling point. For example, add spices, then put the neck of pork into an oven early in the morning, and you’ll find a piping hot meal ready to go by the time your ravenous guests hit the dinner table.

The Simplest Neck of Pork Recipe Ever

Select a large, juicy slice of pork neck, pack it with plums, and then bake it covered with tin foil in an oven at 150°F.

Pork neck bones are affordable, full of flavor, and welcome in many recipes. They also contain a lot of meat which comes off easily after a couple of hours of cooking. Pork neck bones give appropriate dishes a unique flavor.

How to Cook Pork Neck Bones

You cannot be in a hurry when cooking neck bones. To get the flavor out of the bones and into the broth, bring them to a boil slowly with all your favorite herbs and spices, and let everything gently simmer away for yonks.

What does ‘yonks’ mean? Yonks is the amount of time it takes so that a knife or fork easily slides into any flesh on any bone that you test. In an ordinary pot, yonks means several hours. In a pressure cooker, maybe forty minutes to an hour.

Try pork neck bones with a pot of beans, and I know you’ll get the picture. Pork neck bones do extraordinarily well in a slow cooker. They can be cooked on the stove as well as in an oven.

Boil the bones until the meat is tender (a pressure cooker is helpful here), then bake them till they’re crispy on the outside, then cover them with sauce and voila! 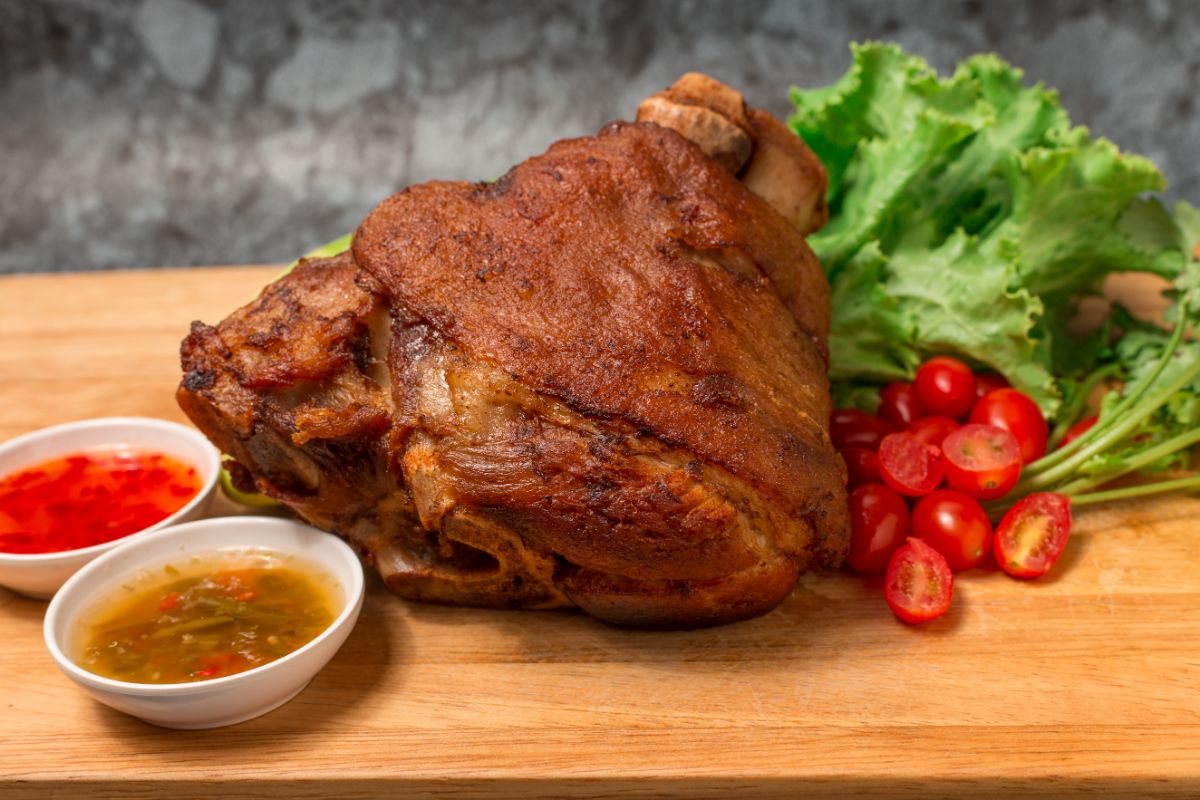 For one thing, pig hock is usually referred to as pig hocks, using the plural term. I imagine this is because the idea of preparing a single hock is ridiculous. For most people who aren’t in dire straits, the very notion of prepping, cooking, and eating one hock is buffoonery on a grand scale.

Ham hocks require simmering for quite a while to soften and surrender its flavor. Therefore, they’re ideal for dishes that cook slowly on low heat. Most ham hocks are smoked and then cured, giving them the most intense, smokey, and salty flavor that works well as a base for soups, stock, and stewed dishes.

How to Cook Pig Hock

Begin by buying fresh pork (pig) hocks; the meatier, the better. As an ad hoc guide, calculate that two large, meaty hocks will comfortably feed up to three people. Prepping the hocks before you cook them involves ensuring that you remove any hairs on the hocks, as they are a real nuisance to the diner and appetite destroyer if cooked. To easily remove these nuisance hairs, singe them off over a candle’s flame.

Put all the ingredients together and prep your veggie. Combine all the vegetables and spices in an enormous pot. Add hot water and the pork hocks. (Hot water is necessary because it helps to seal the meat and also keep it moist.) Let everything simmer till the meat becomes tender. Be careful not to overcook, as the hocks will break apart.

Remove the hocks using the help of a slot spoon and place in an oven dish. The liquid should be strained and put aside. Surround the hocks with the cooked vegetables and use just enough broth to cover the hocks to about halfway up in the dish. Do not baste the layer of fat above the liquid to allow it to get brown. It has to dry for the browning to take place.

Based on the oven you use, you might need to cook the hocks for more than 30 minutes to get the exact amount of ‘browning’ or ‘crispiness’ you desire. Be sure to watch over the hocks carefully, so they don’t get burned.

For an Oktoberfest experience, serve your hocks with mustard on the side and sauerkraut. Yum, yum! 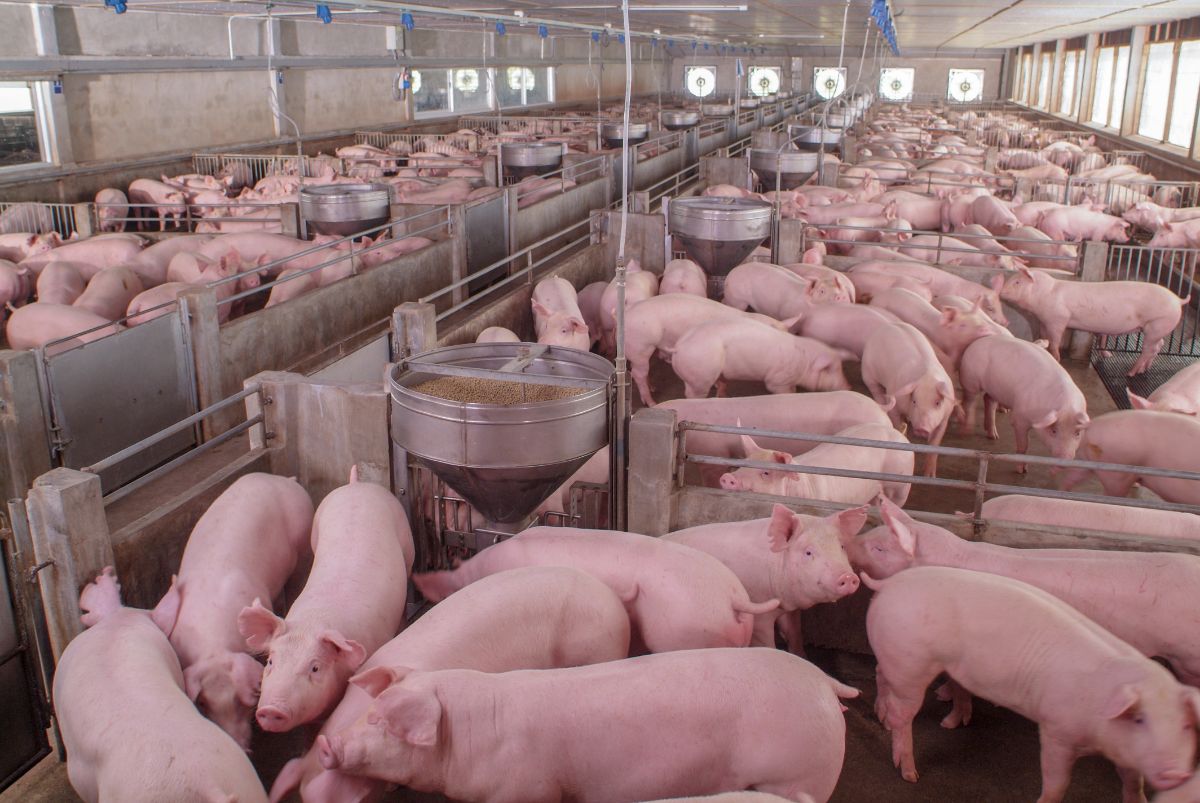 As promised earlier, here is a sundry list of 14 pig breeds I provide just to give you a taste of the sort of pigs that exist worldwide today.

It’s heart-warming to see that, once again, Uncle Sam comes out on top with our 1,500 lb monster, ‘the Red Wattle hog.’

* Unfortunately, it appears that the Norman disdain for English hygiene was well-founded. As late as the 1940s, American soldiers stationed in Britain during the Second World War complained about the strangeness and strength of the smells emanating from beneath the skirts of their English paramours. But perhaps the less said about such things, the better.