There are several types of Pepperoni. Read this article that discusses how categorizing pepperoni by the type of ingredients they're made from. 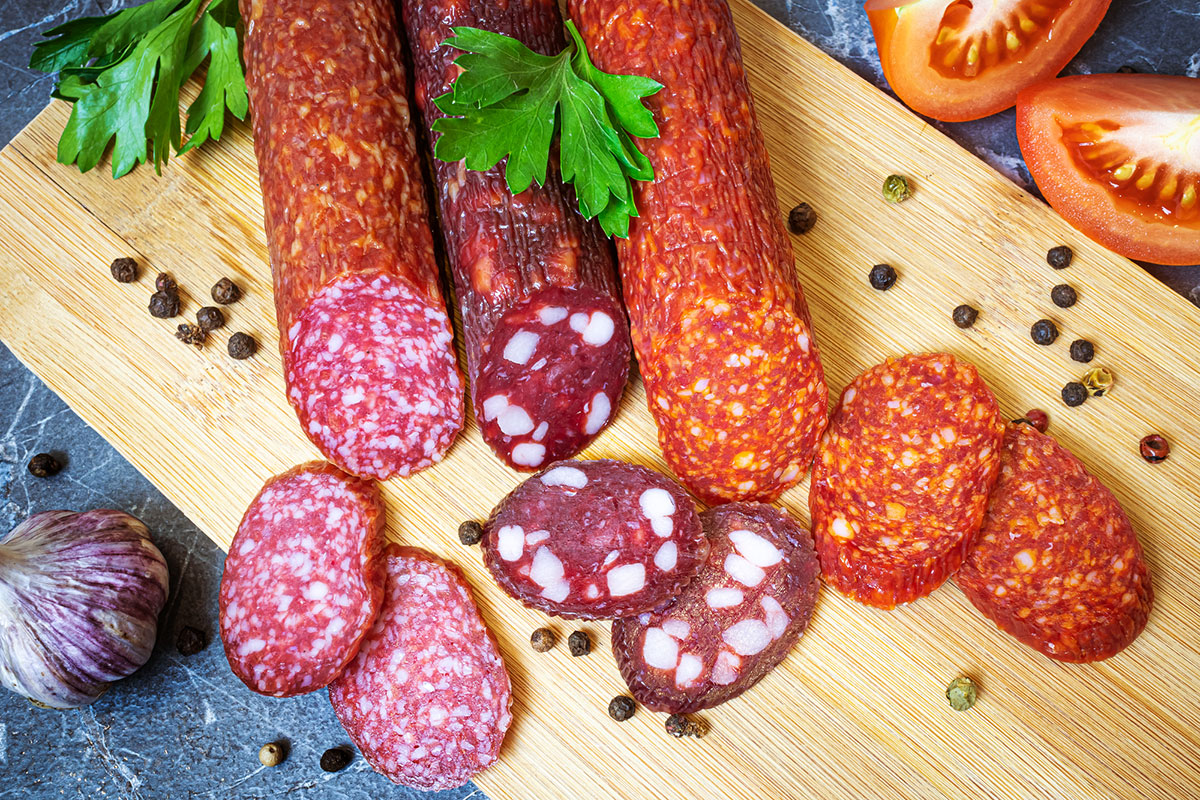 Certain websites on the Internet loudly trumpet and make much ado about “three types of salami,” claiming that these three types are “… the small size we are familiar with, the larger diameter sandwich size (same food/bigger slice), and a spicy-hot or smoked variety. Or a crumble-style pepperoni – little teeny chunks like you find on some frozen pizzas.”
Retrieved from Cement Answers.

Hmm. That’s all I’m going to say about that! First of all, those are actually four types the writer has just listed, not three. Second, “a spicy-hot or smoked variety” is a type of salami. Really? Hmm and double hmm!

Actually, as you’ll see below, there are considerably more types of salami than just three, and each category is based on something a little more concrete than ‘size’ or spiciness, for goodness sake.

There are three ways of categorizing pepperoni: by method of preparation, by type of meat, and by type of additional ingredients. Classified this way, there are 11 types of pepperoni. However, if cultural sensibilities are considered, it is possible to count another two kinds of pepperoni, bringing the total to 13.

Clearing Up Some Pepperoni Misconceptions 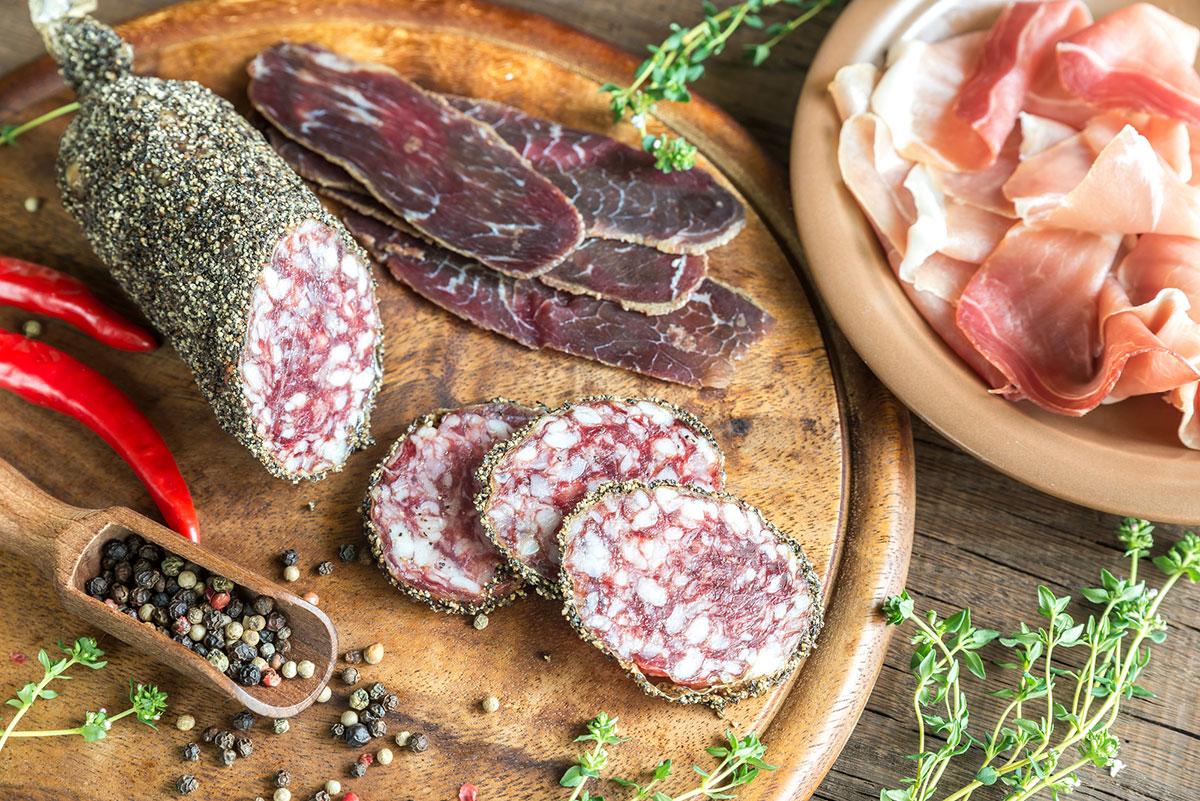 Let’s begin by clearing up some popular misconceptions. Pepperoni is an American preparation, not, as is commonly imagined, Italian. What is undeniably Italian is salami, a sausage made of pork, beef and pork, or horse meat and pork. The common denominator being… (c’mon, you can do it…) yes! Pork! (Well done; I knew you had it in you.)

In short, pepperoni is an Americanized salami, and different pepperoni are based on different salumi (‘salumi’ is the plural of salami, don’t you know, sniff, sniff 😉). However–and it is a big ‘however–in the United States, pepperoni can be made only of pork or beef. Any pepperoni that is 100 percent beef has to be named ‘beef pepperoni’ by law. 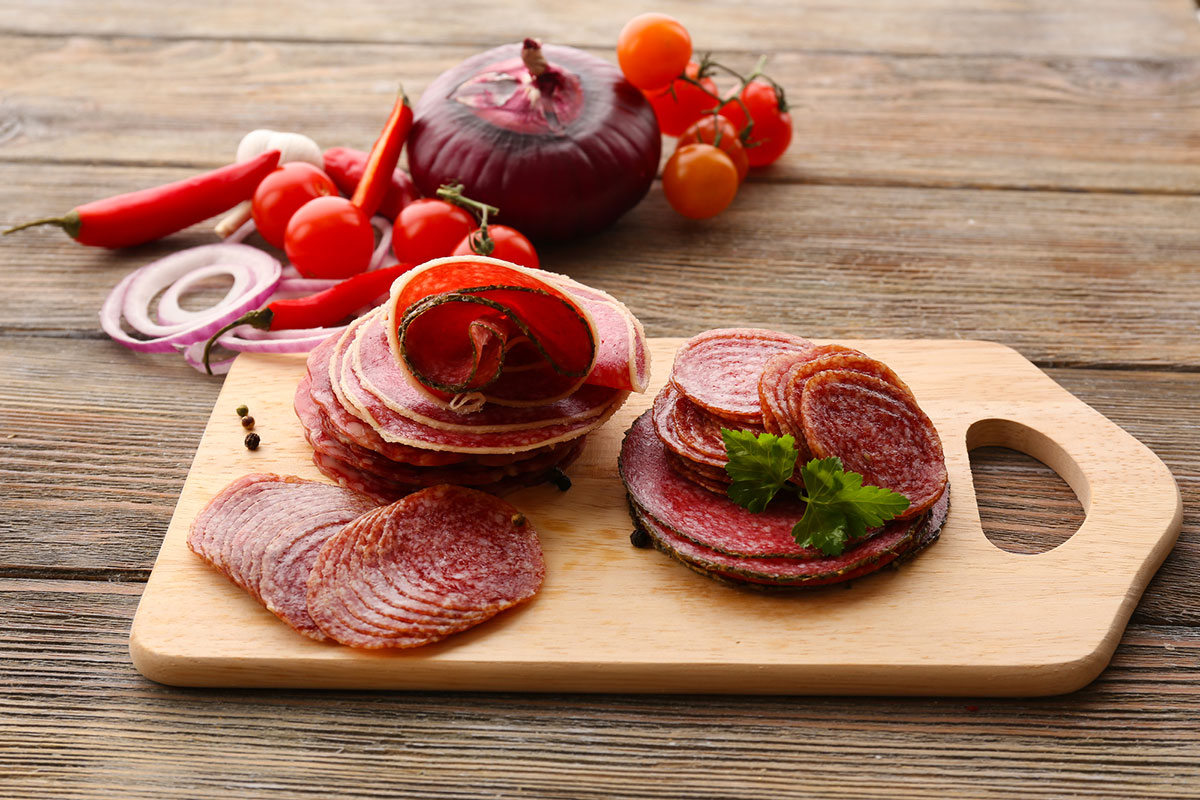 Anyway, brought back from the edge by a looming deadline and having in some degree vented my spleen sufficiently to calm shattered nerves, there are three ways and one ‘other’ of categorizing pepperoni. These are:

The ‘other’ way is the culturally sensitive way to make pepperoni. Are these really different types of pepperoni? I really wouldn’t say they are, but many people won’t touch pepperonis that aren’t made in a culturally sensitive manner, so from their point of view, there’re at least two types of pepperoni; the ones they’d eat and the ones they wouldn’t touch with a ten-foot pole made of gold.

By the Way the Pepperoni is Prepared

You can cube pepperoni into delicious little, er, cubes. 🙄 You can stick it onto a stick, lay it flat, or tease it into a cup-like shape. Each of these four types of pepperoni brings a different kind of excitement to the avid gourmet, such as what I am.

Pepperoni is offered in more than slices in the present. From sticks to cubes, the delicious meat is available in a myriad of cuts and shapes.

Today, cubed (or diced) pepperoni is an increasingly popular option that regularly shows up on grocery store shelves like a food refugee from some pepperoni republic. Instead of the traditional sliced method, cubed pepperoni is cut into quarter-inch cubes so that cooks can use the cubes in different imaginative ways other than the same-old, same-old pizza. Cooks can bung cubed pepperoni into salads, or even into, or along with, your favorite breakfast eggs. Scrumptious, no? 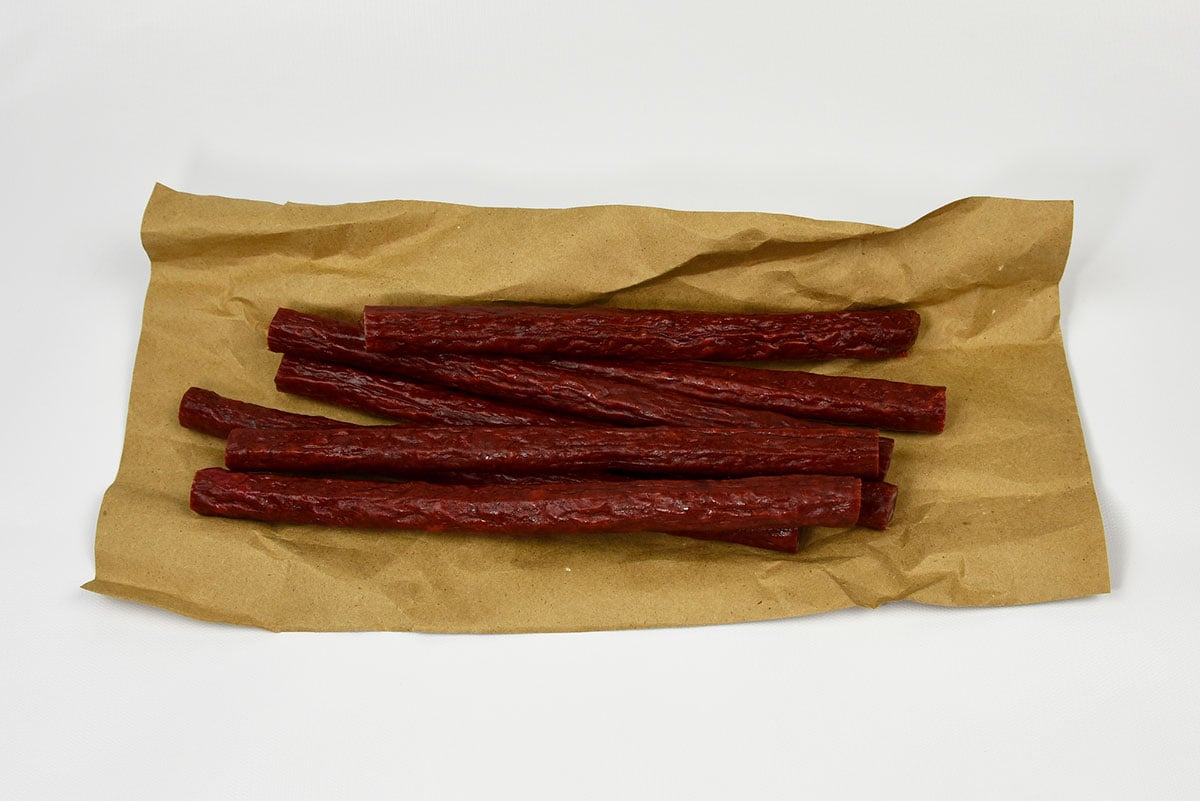 There are two types of pepperoni sticks that you can purchase–the snack-on-a-stick kind or the ones you cut yourself kind.

The first kind is generally approximately a foot-and-a-half long and typically about 2 inches in diameter. They are made specifically for the cook to offer his guests a new and authentic experience by allowing each guest the opportunity to slice bits of pepperoni off the stick for themselves. Anyone looking for an exciting departure from the usual fare at his dinner table can go this route and add cutting pepperoni from sticks as an amusing and personal touch.

The other type is for die-hard pepperoni lovers. These short sticks of pepperoni are much like kebabs served in different ways worldwide, yet this stick pepperoni is peculiarly American and stands out by being a snack on a stick rather than a meal from a stick. This type of pepperoni is smaller and shorter than the pepperoni slices cut from a large stick. However, they are equally mouth-droolingly delish. 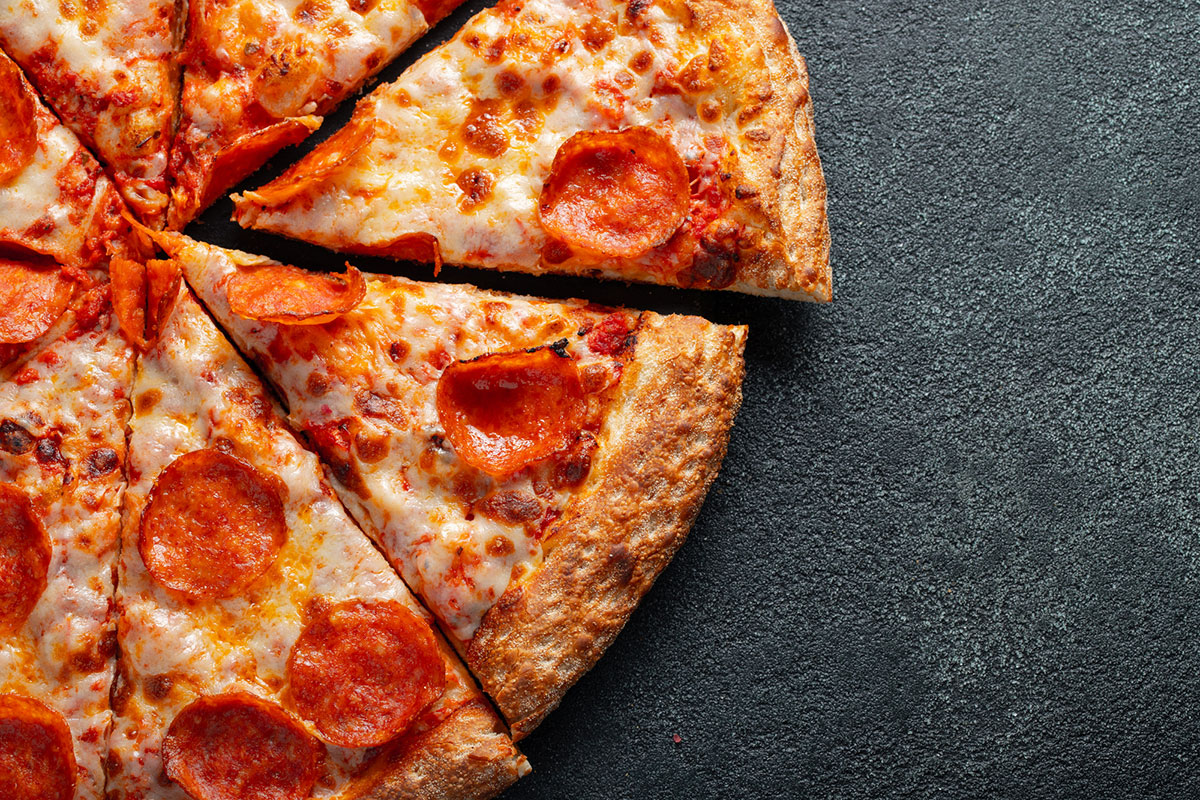 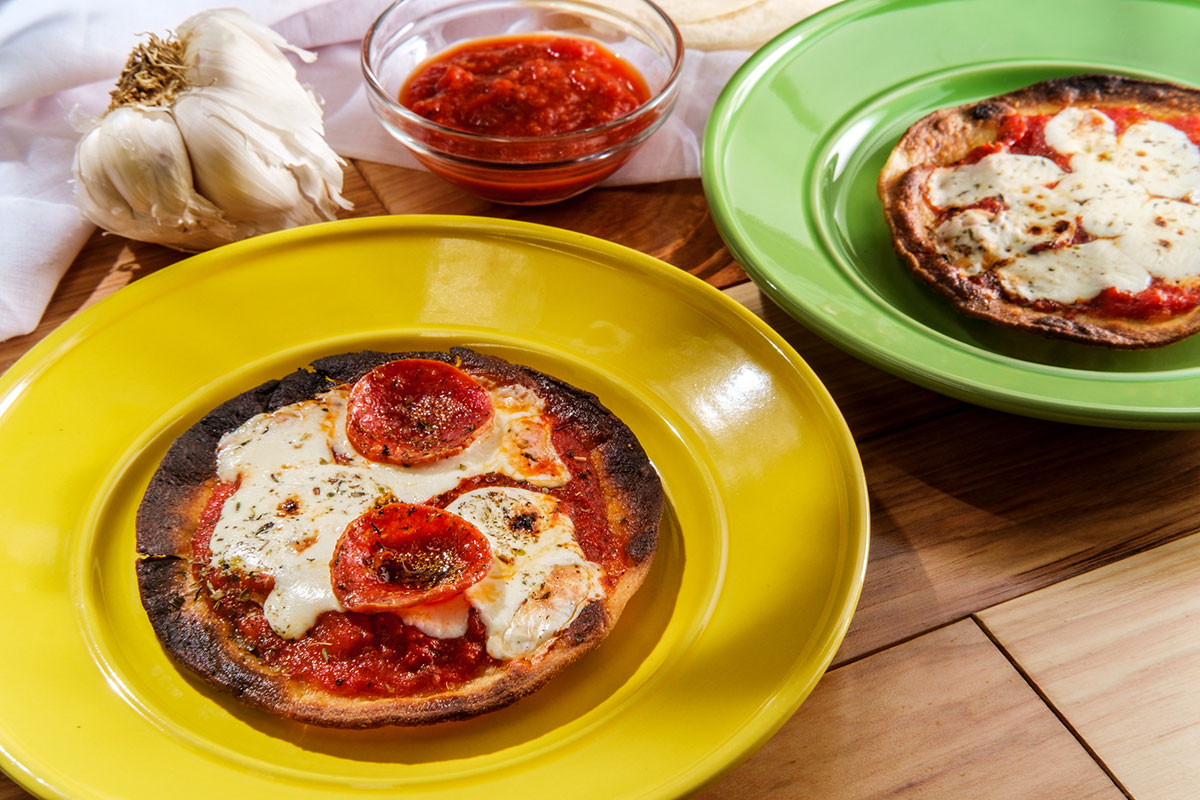 Cup char is so-called because it curls into a shape that looks like a cup when heated up and slightly charred. The cup char is famous because it can hold onto grease and fat in the hollow of its cup-like shape, which a certain type of pizza-muncher loves dearly.

By the Extra Ingredients Used to Make the Pepperoni

Many people do not want to (or simply cannot) take advantage of the high-fat varieties of pepperoni we’ve come to slobber over so lovingly. Fortunately for these unfortunate folks, (I refer here to the ones who must stick to a vegetarian diet for medical reasons, for instance), there are a host of varieties of pepperoni that has been adapted to every dietary preference. 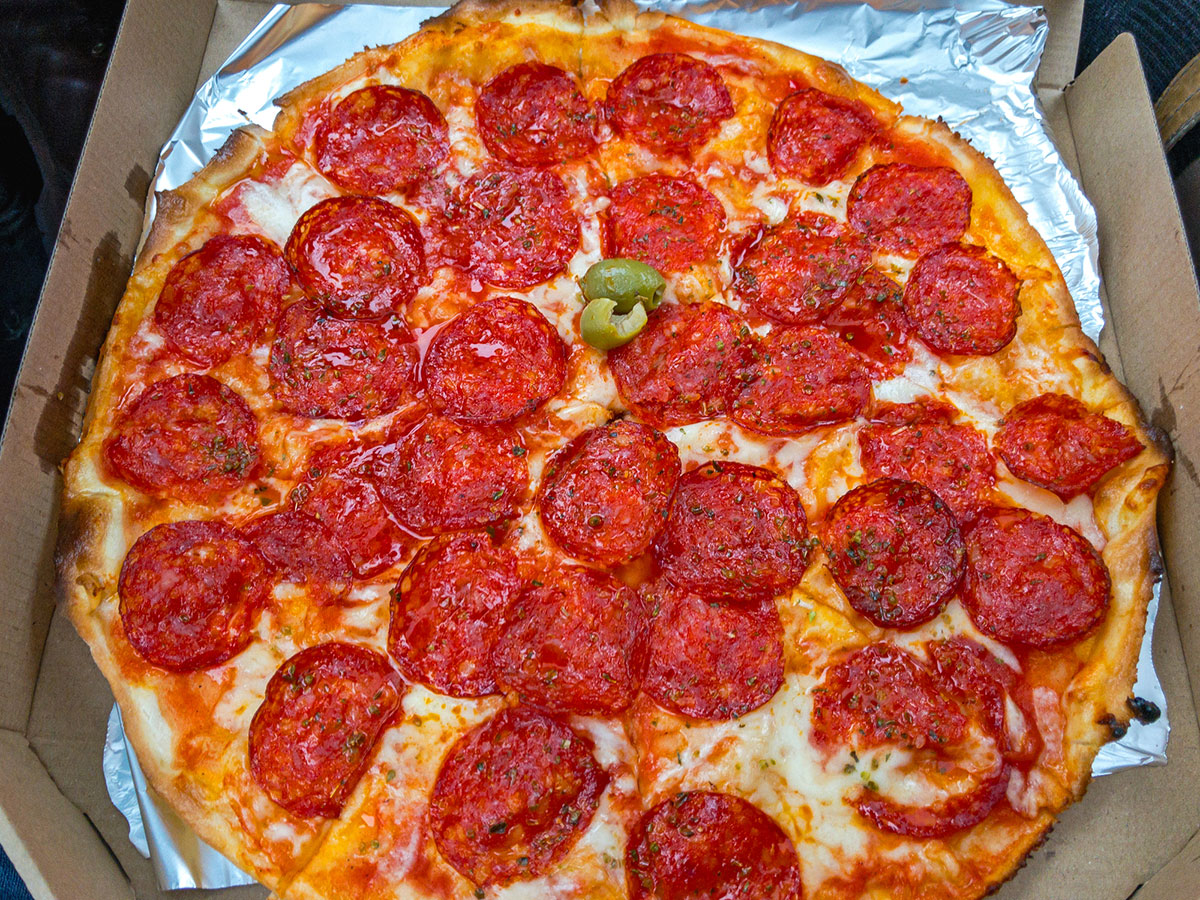 The majority of pepperoni is gluten-free, but there are still occasional instances when the binding agents used in the preparation of the pepperoni contain small quantities of gluten. The best way to ensure this is to closely inspect the manufacturers’ labels to ensure that the product is gluten-free.

There aren’t any tests that ensure zero gluten. However, many pepperoni producers take extra care to ensure that their labels are precise and their pepperoni is safe.

There are few alternatives offering low-sodium pepperoni. Basically, like calories, salt is what puts taste into foods, and so far, the human race hasn’t figured out how to put one over the Big Cheese Upstairs.

Even low-sodium pepperoni comes with a no-nonsense dollop of salt–a low salt pepperoni has only 50% less sodium than a normal pepperoni–so eating a large quantity of pepperoni is likely to result in an uncomfortable outcome. 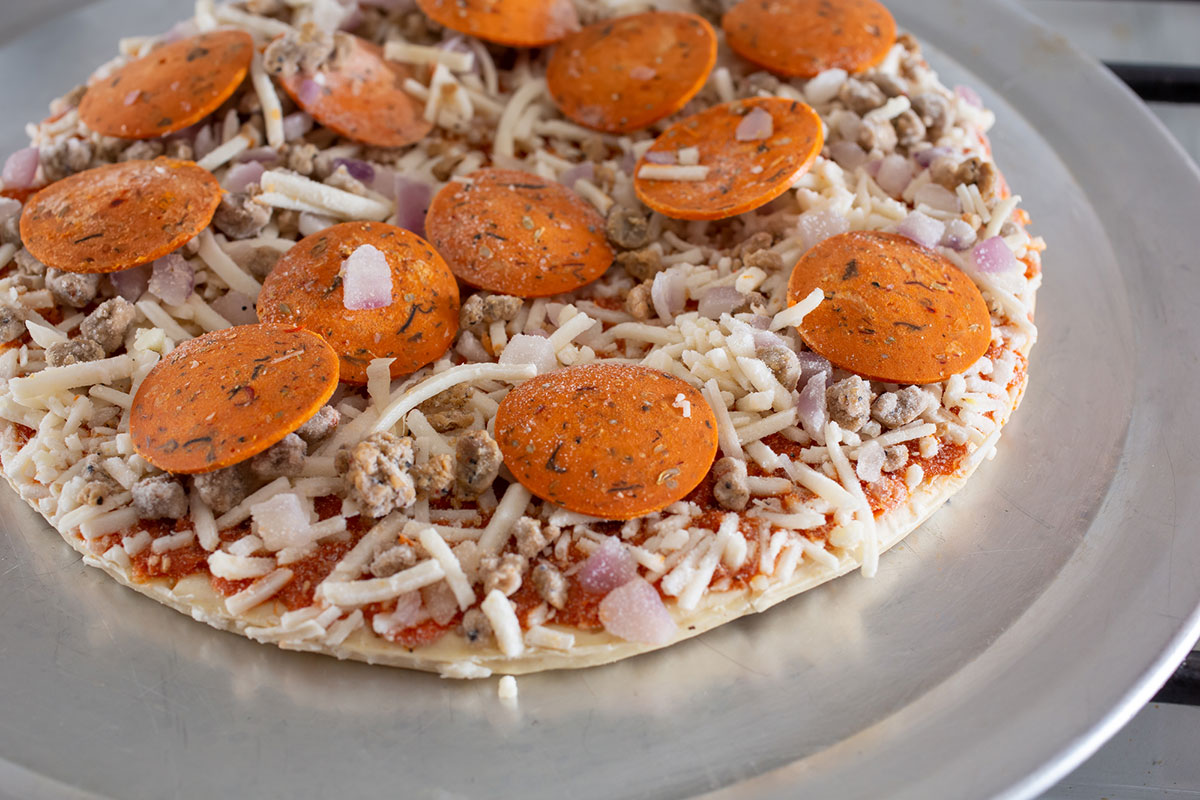 To all meat-eaters surprise, pepperoni made from plants is loved by vegetarians and vegans as a meat replacement. While the ingredients used differ from one producer to another, they’re generally a blend of soy protein and legumes, lol, (sorry, I shouldn’t have laughed), vegetables, and wheat gluten.

They are combined to produce what some say is a remarkably “meat-like” product that can then be shaped round, like our pepperoni.

For those who are allergic to gluten, it’s important to note that among the primary ingredients in the plant-based pepperoni is wheat, so make sure to check the label.

By the Type of Meat Used to Make Pepperoni

There are several types of meat apart from pork that can be tastefully used in making pepperoni. I’m speaking here of meats like venison, turkey, and beef. Each meat naturally produces a different type of pepperoni. Although I don’t treat the matter individually below, mixed-meat pepperonis offer their own unique blend of culinary enjoyment. 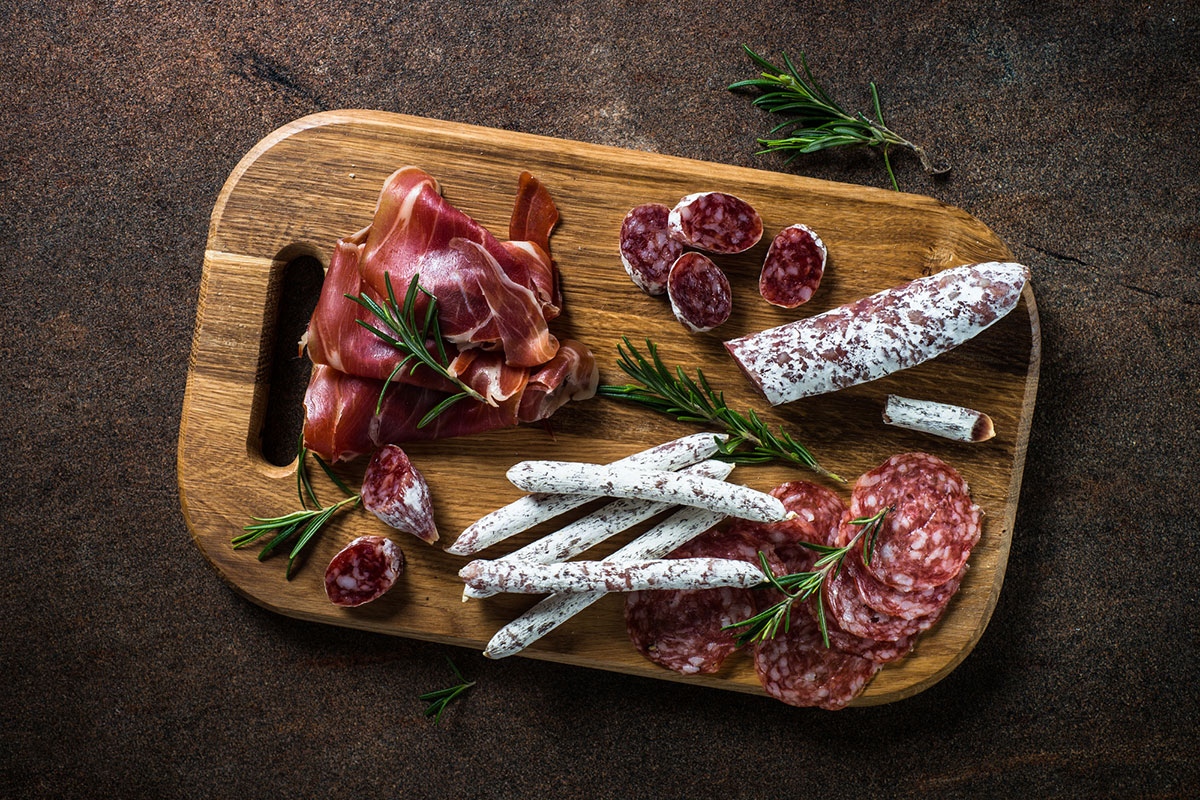 Beef pepperoni is exactly what it says on the box. It is a type of pepperoni made of 100% beef. It is also called “halal pepperoni,” which I’ll come to below.

For those of us who aren’t Muslims and for whom purely beef pepperoni can only be a matter of curiosity or taste, I’d say that beef pepperoni is more ‘interesting’ than tasty, compared to standard pork pepperoni. Of course, like beauty, the taste is a matter of personal choice. 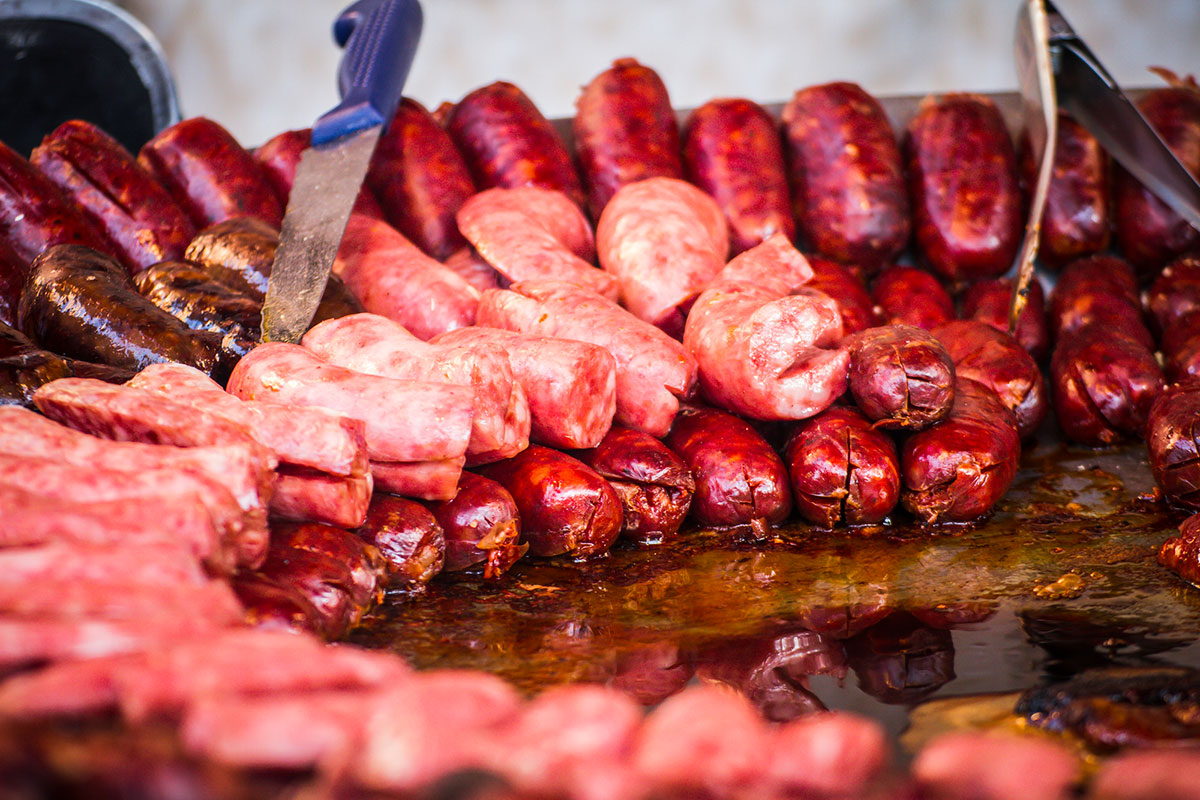 Most pepperoni available throughout the United States contains a mix of pork and beef. This mix of meats differentiates it from salami, which is made entirely of pork. While there’s no such thing as pure pork pepperoni, that hardly matters since whatever the heck is in it is drool-creating, lip-smacking, wallet-draining delicious, no matter the ingredients! 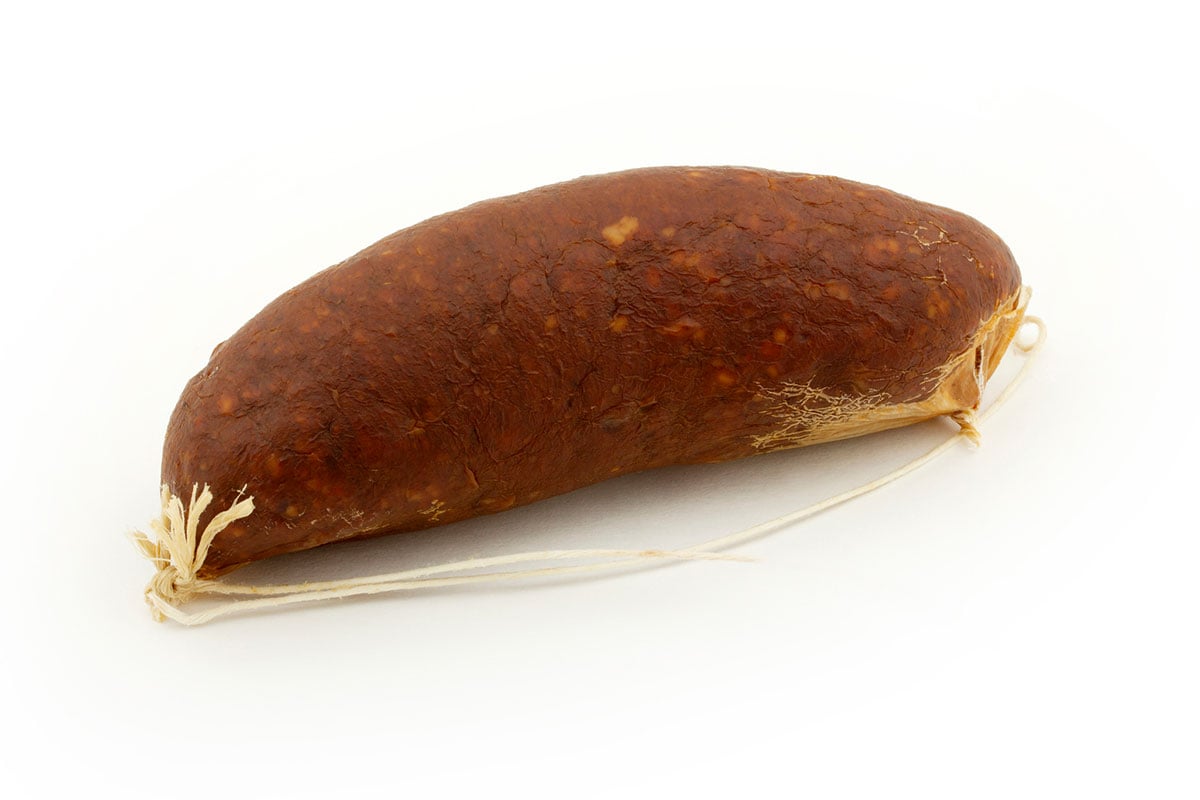 In the US, under our labeling laws, when you purchase turkey pepperoni, turkey meat must be the only animal flesh used in the food. Pork cannot be used to make turkey-based pepperoni. However, the flavor is very similar, and many choose to use it instead of the traditional pork and beef pepperoni to reduce calories and fats. 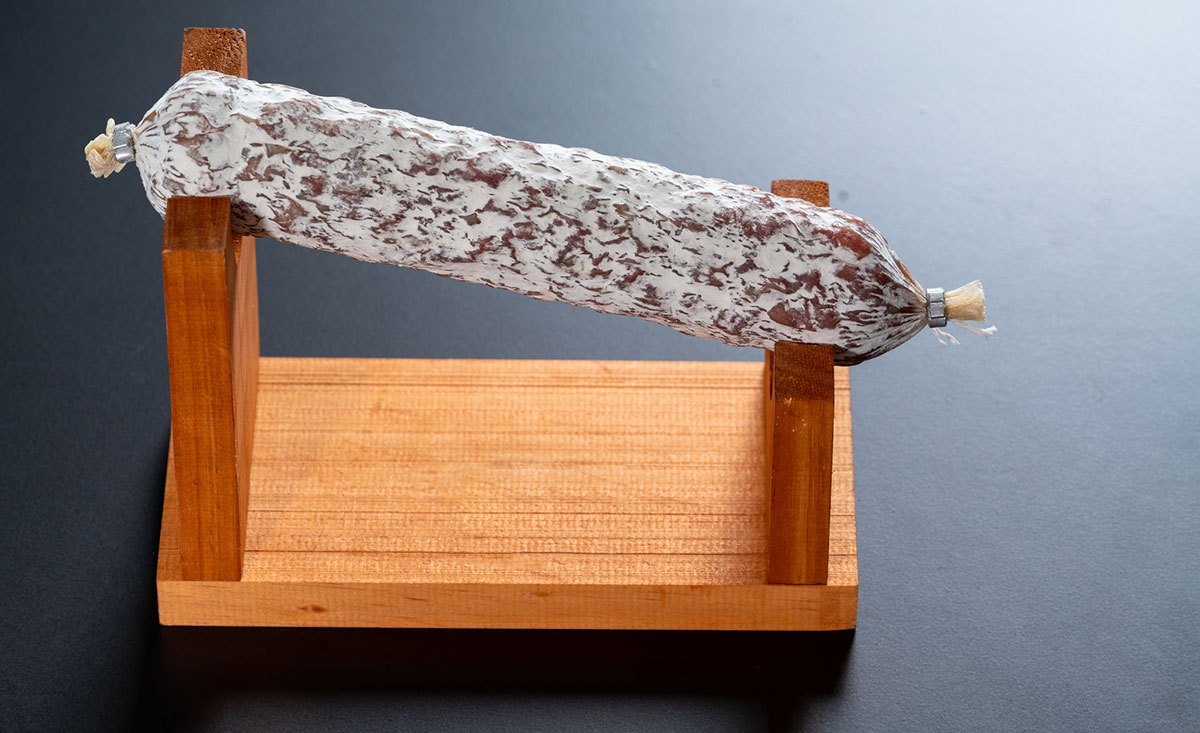 If you’re a big fan of deer meat or have never tried it before, you’ve got to try pepperoni made from venison. Trust me; if you’re like 99.9% of the rest of us, you’ll thank me for it. At first, it tastes a little weird, but that’s only because all our lives, pork, or pork and beef pepperonis are all we’ve ever known.

It’s not surprising that entirely new meat momentarily sets us back. But little by little, as your hands creep back to the pepperoni sticks (which is how venison pepperoni is usually sold), you’ll be horrified to wake up from your food hypnosis and find that you’ve scoffed (such a lovely Brit word) them all.

You might face difficulty finding venison pepperoni to buy, and when you do, you might find it tastelessly expensive, as a joke told in poor taste. Well, don’t chuck in the towel. There are virtually countless recipes on the Internet. Man up, roll up your sleeves, get busy, make this pepperoni yourself, and dig in. Good luck!

See also  6 Types of Whiskey – Do You Know Them?

The thing is, like Jews, Muslims cannot have pork be a part of any meal so that it is halal, otherwise, such a meal would be haram. Therefore, 100% beef pepperoni is perfectly halal, or acceptable.

There are no rules for mixing dairy and beef in a meal, which is the situation with kosher meals. 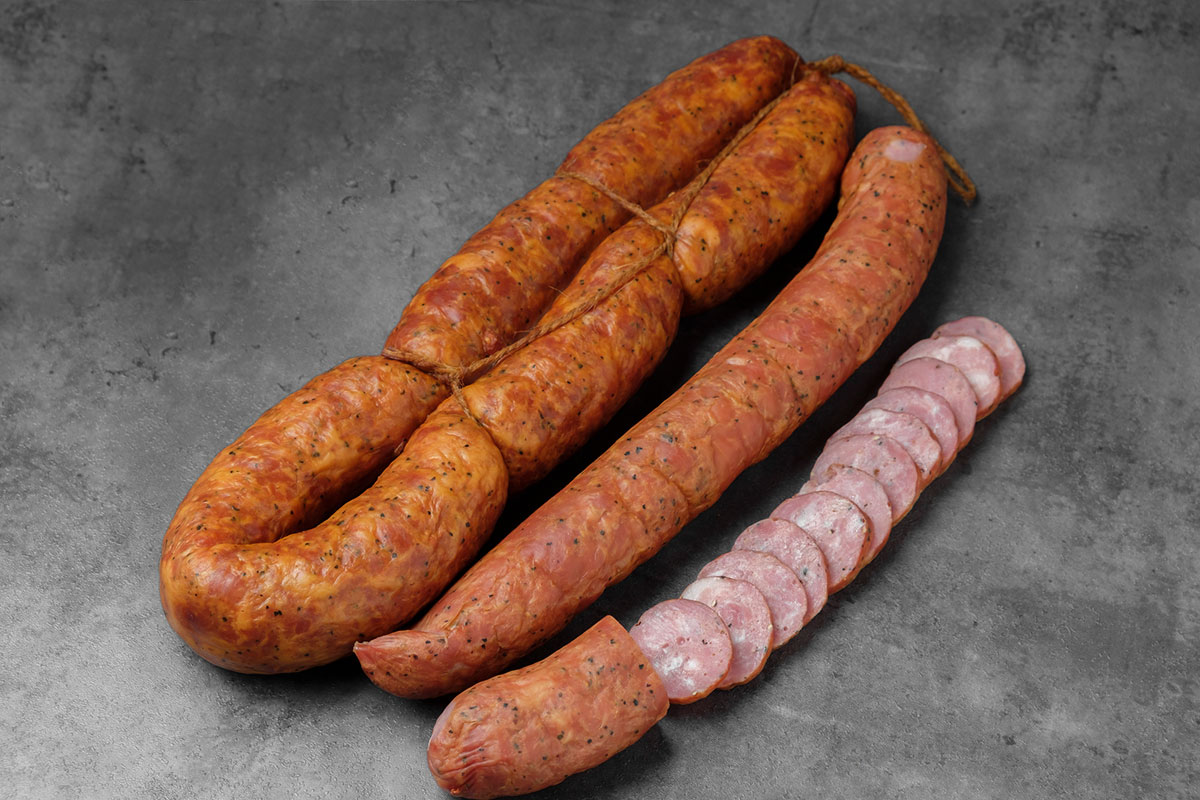 Kosher pepperoni must be made with beef since pork is not permitted in kosher homes. In addition, it has to be prepared in conformity with kosher guidelines. This means that ‘kosher’ is a little more stringent than ‘halal,’ but I don’t think any grown-up is suggesting that it is some kind of competition.

But it is rarely easy to find kosher pepperoni, so typically, plant-based alternatives are employed instead.

The other issue is the fact that dairy and meat can’t be consumed simultaneously, so if pizza is on the menu, you can be sure that it’s either cheese with vegetables or a plant-based alternative to pepperoni as a substitute.