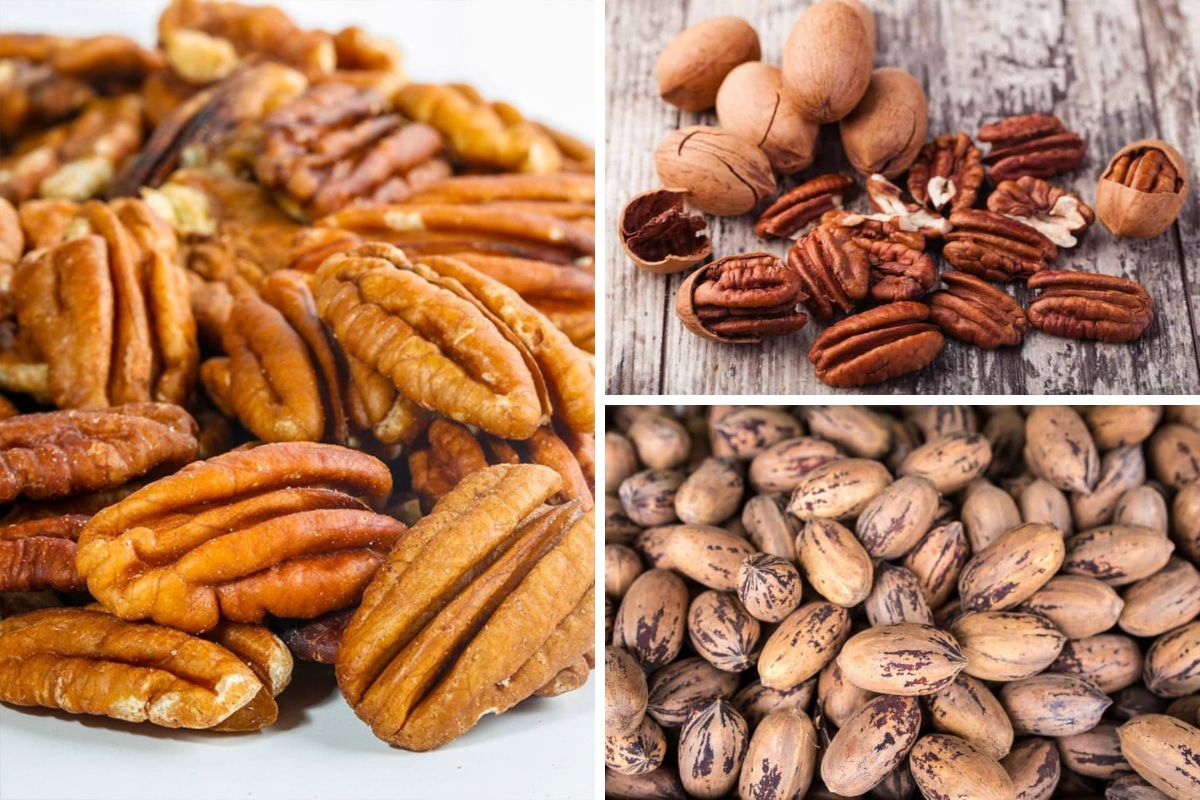 Pecans are edible nuts native to the southern U.S. and northern Mexico. Their name comes from Algonquian languages referring to nuts requiring a stone to crack. Groves of pecan trees grow wild along riverbanks with humid areas of the Lower Mississippi River Valley providing some of the most ideal conditions.

Traditionally a valuable food source for Indigenous cultures pecans were not commercially grown until the 1880s. Although only a few are widely planted there are now over 500 cultivars of pecan trees with new ones being introduced through breeding programs. 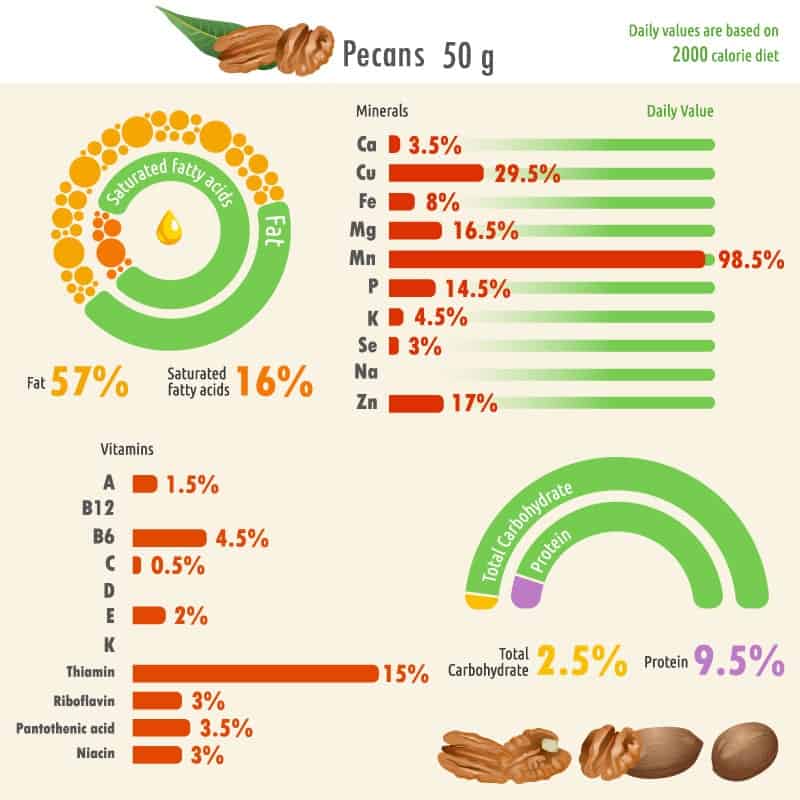 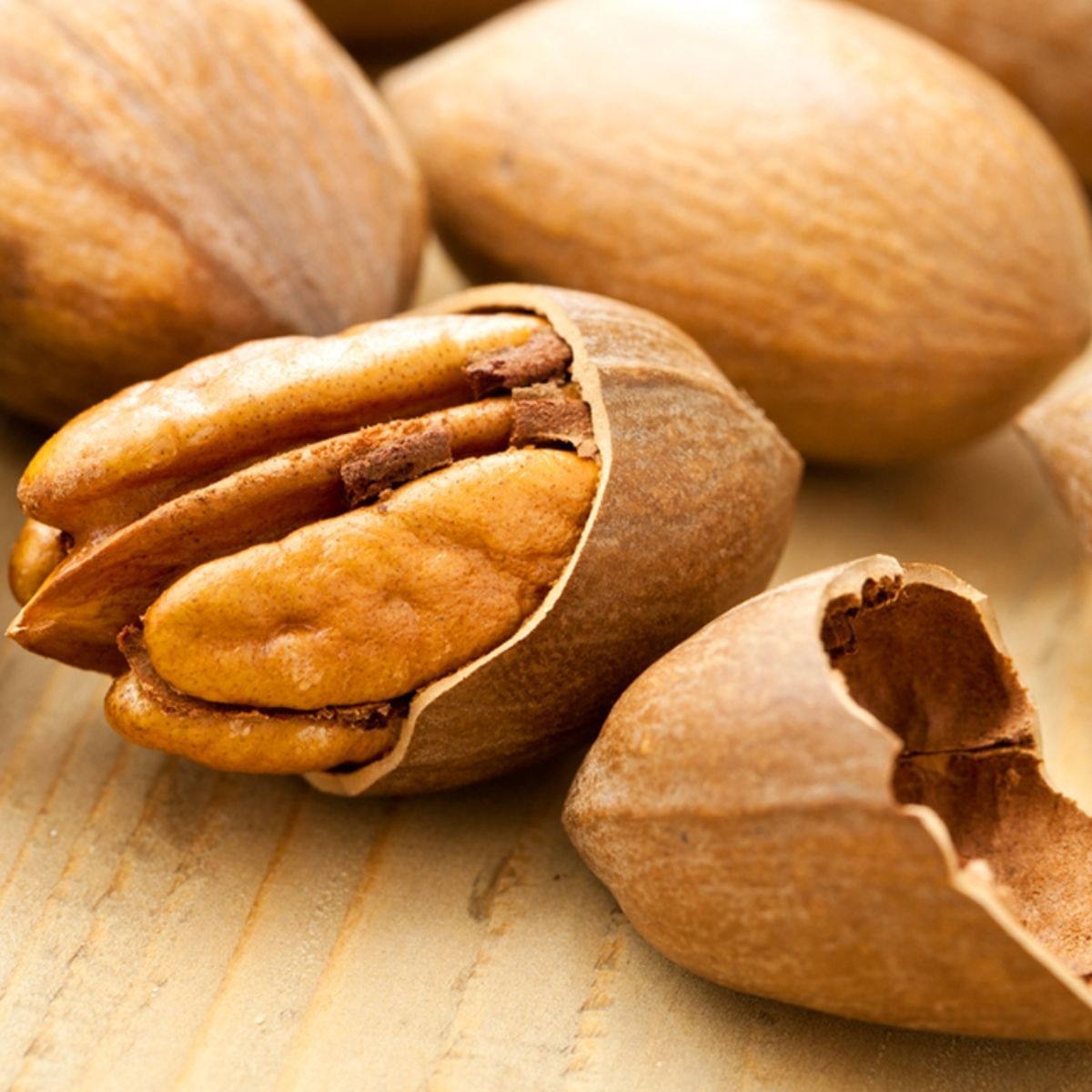 Highly prized Caddo pecan trees, first produced as a hybrid cross between the ‘Brooks’ and ‘Alley’ cultivars in Georgia in 1922 or ’23, are considered a heavy-producing variety. 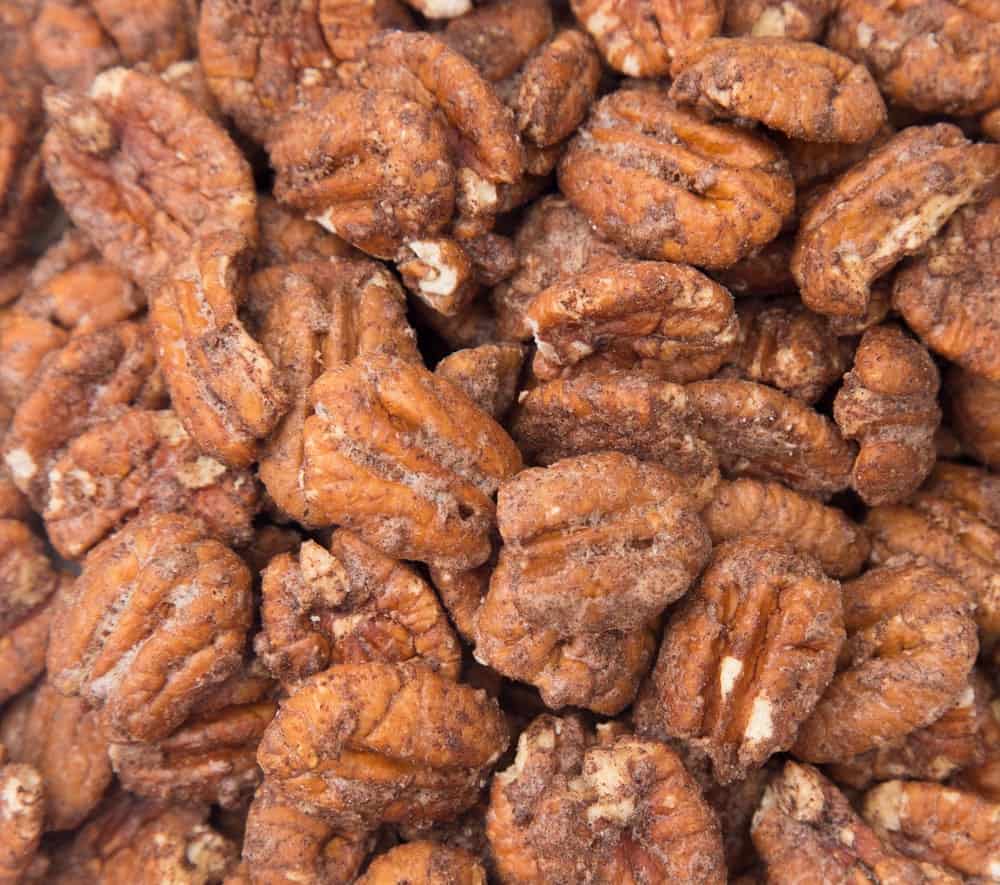 Candy pecans are an older variety and so named because they were intended to be used in sweet treats. Like most pecan trees, they do best in zones six to nine, and grow to a mature height of 70 feet or more with a 50-foot spread. 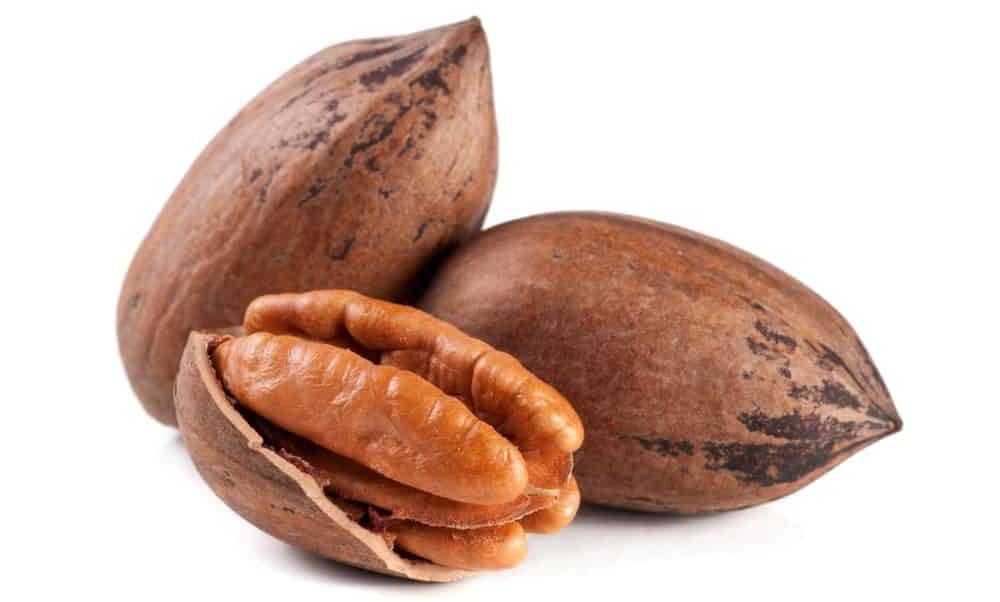 Originating in North Carolina, Cape Fear pecans usually weigh about eight grams, which means roughly 58 pecans come in one pound. They start bearing at a young age, and the kernel is attractive and light-colored.

They are either oblong or broad oval in shape and have a medium-thin thickness. Cape Fear pecan trees, first cultivated in 1912, are fairly resistant to various leaf diseases, and they grow best in zones six to nine.

Two types of pecans – the Elliot and the Stuart – are pollinizers for the Cape Fear pecan tree and vice versa. The trees themselves are sturdy and rigorous, and they have deep taproots. 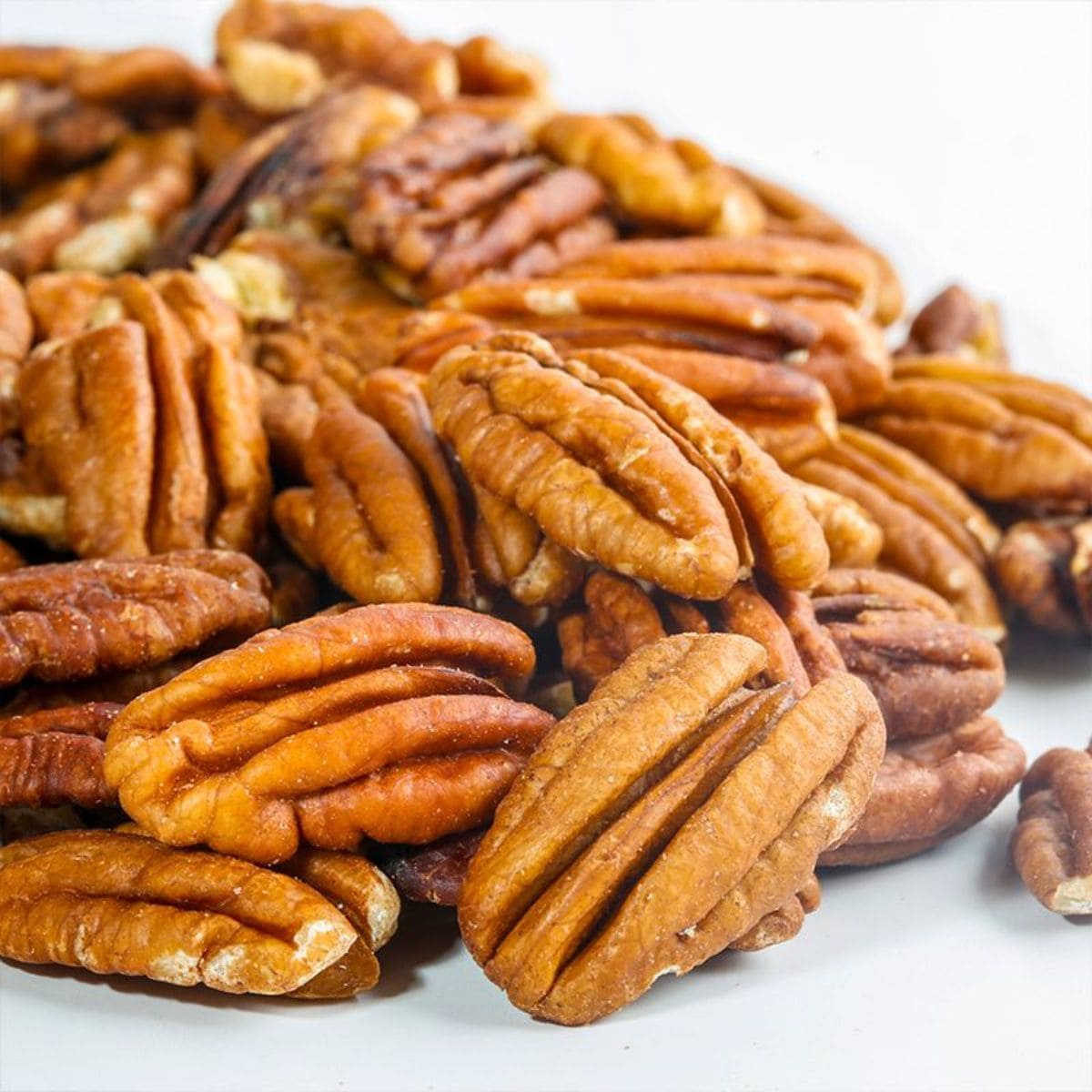 Creek Pecans are long and narrow when they reach maturity. For each pound of the tree, there are approximately 50 nuts produced. The trees enjoy more shade than most and tend to grow together. One of the most disease-resistant papershell varieties, harvest season begins in early October. 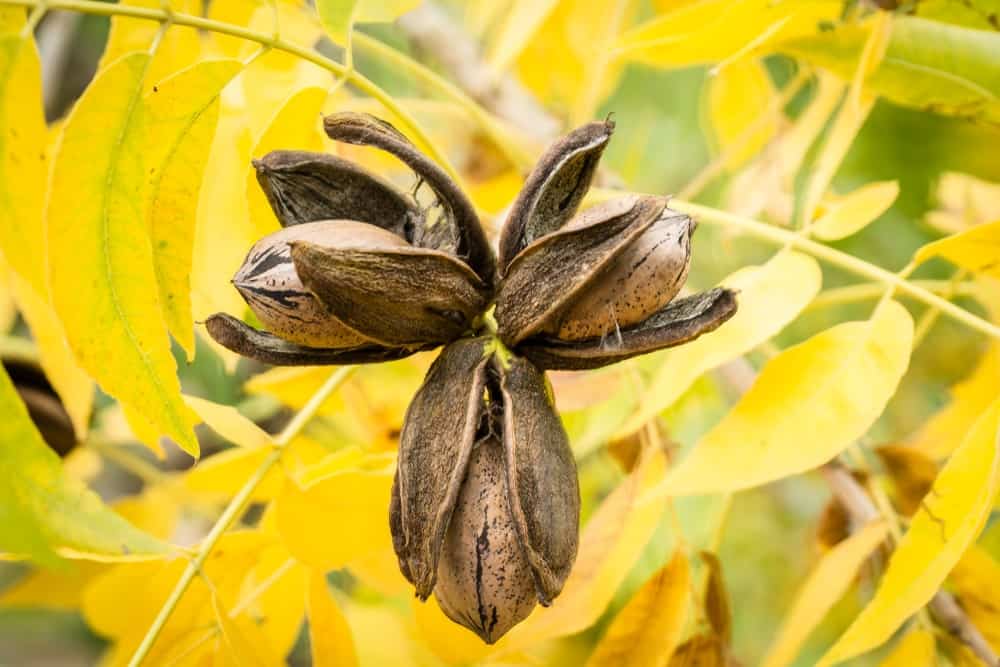 A late-season pollinizer, Curtis pecan trees produce large quantities of the nut, which is small, has a medium-thin shell and contains dark speckles on the shell.

Since it requires heat to grow best, it is recommended for zones six to nine. The cultivar, first introduced in Ocean Springs, Jackson County, Mississippi in 1914, is fairly vigorous and upright. 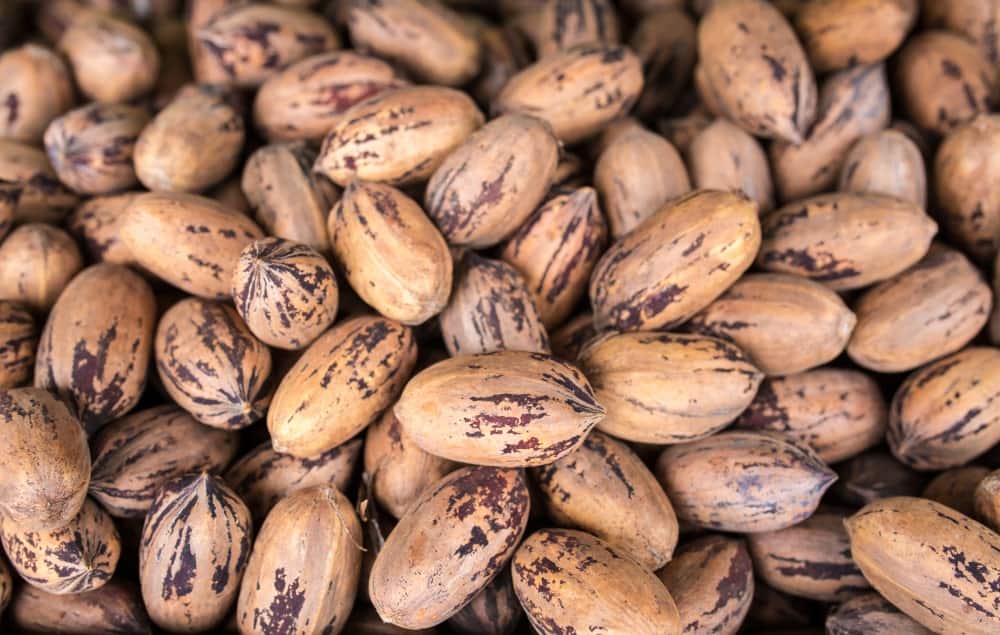 When it comes to top-of-the-line pecans, you can’t get any better than Desirable pecans. They have medium to thick shells and a very large, well-filled nut. If you look at half of a Desirable pecan, you’ll likely be impressed with its size, and if you’re a pecan lover, this is what you want.

Their shells are relatively soft and they are medium-large in size. The cultivar, first introduced in Ocean Springs, Jackson County, Mississippi in 1914, is fairly vigorous and upright.

The trees can grow to a mature height of 100 feet with a 75-foot spread. They do not like overly dry conditions and do best when grown in zones six to nine. The nuts ripen from Oct. 25 to Nov. 10. 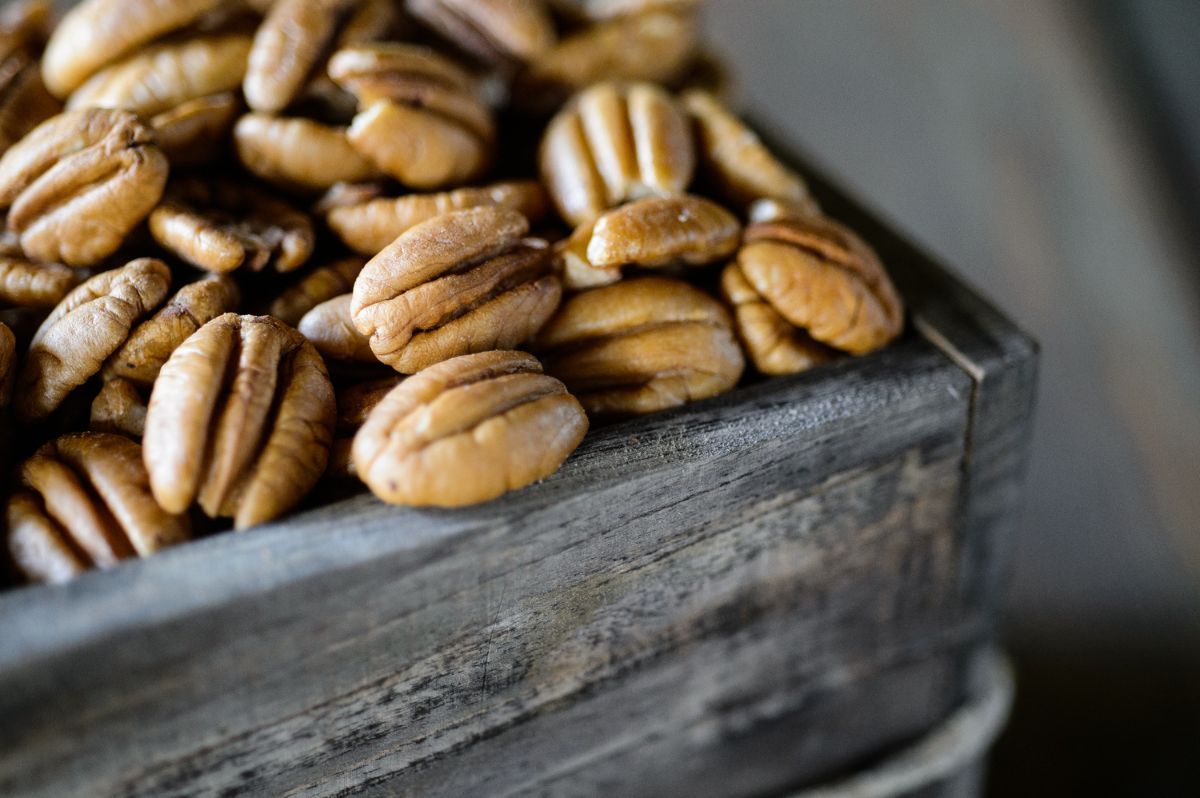 Found in Georgia, the Elliot pecans are the sweetest of the pecans, giving a creamy texture when you bite into them. They are dark brown and black, but more round than other varieties. They are limited and not found as frequently as others, making them a delicacy.

Hican pecan trees are a natural hybrid of hickory and Mahan pecans, but they are more tolerant of the cold than other types of pecan trees.

The nuts have an elegant flavor, tasting like 80% hickory and 20% pecan, but they are similar to other northern pecans. In fact, hican pecans are highly prized because they are very rare, and the trees can pollinate with both hickory trees and pecan trees. 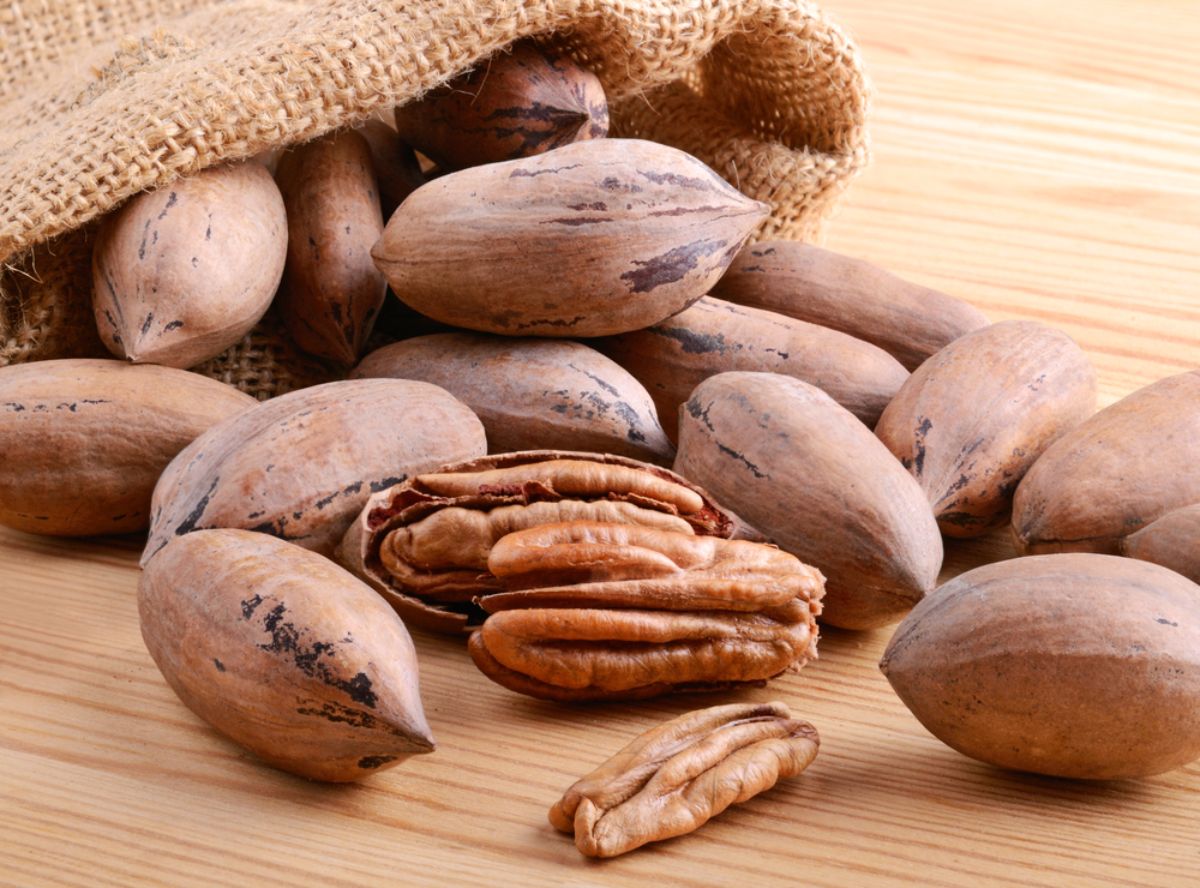 Probably one of the more popular and recognized pecans is the Kanza. Ready to harvest around early September, these are darker in color, and always in an elliptical shape, even if they are a bit round in the middle. They have some of the largest yields, around 80 pecans to a pound. 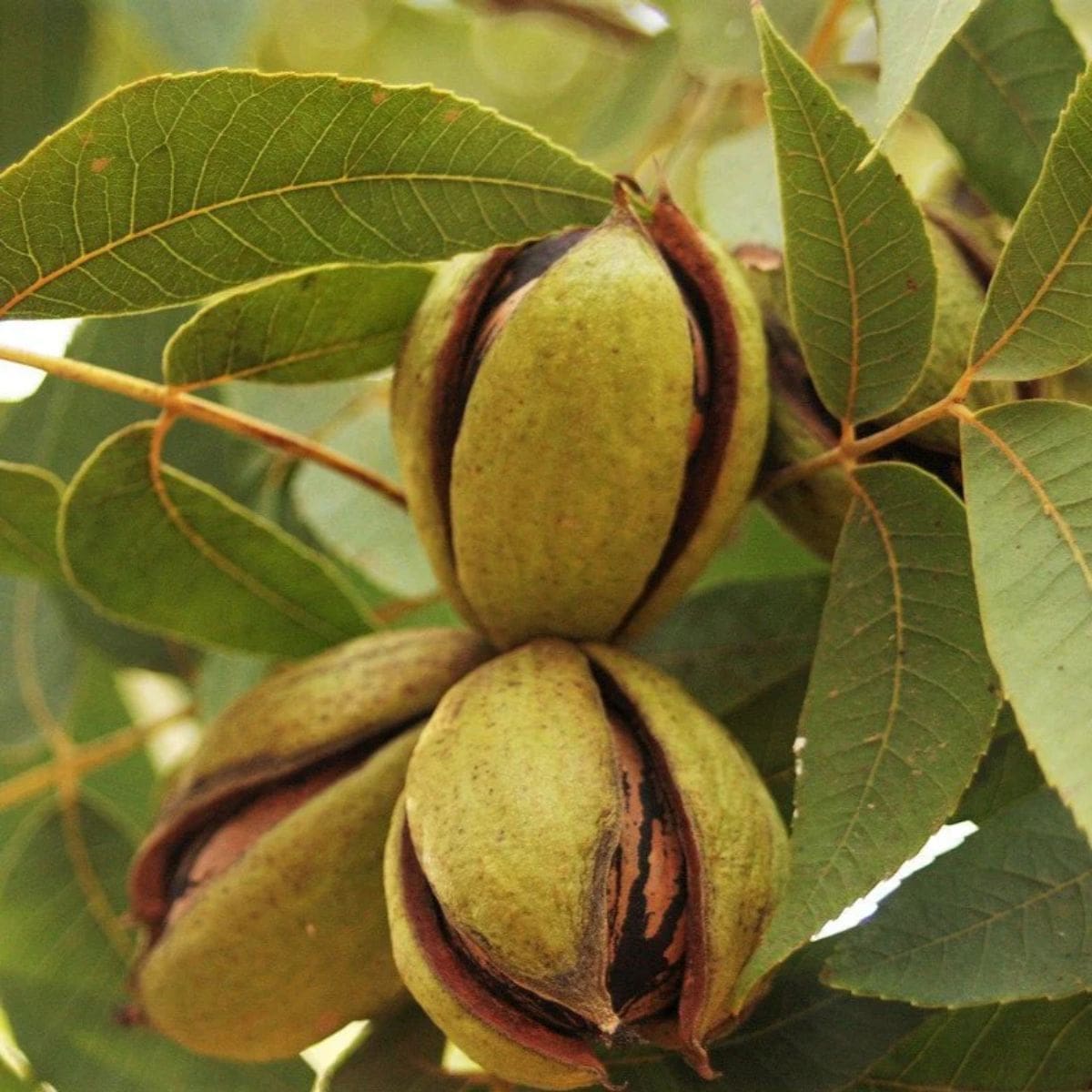 Native to the Midwest and Southern regions, the Kiowa pecan has a large nut production in alternating years. This pecan tree is great in some of the hardest soil types and enjoys partial shade. It is resistant to pecan scab. 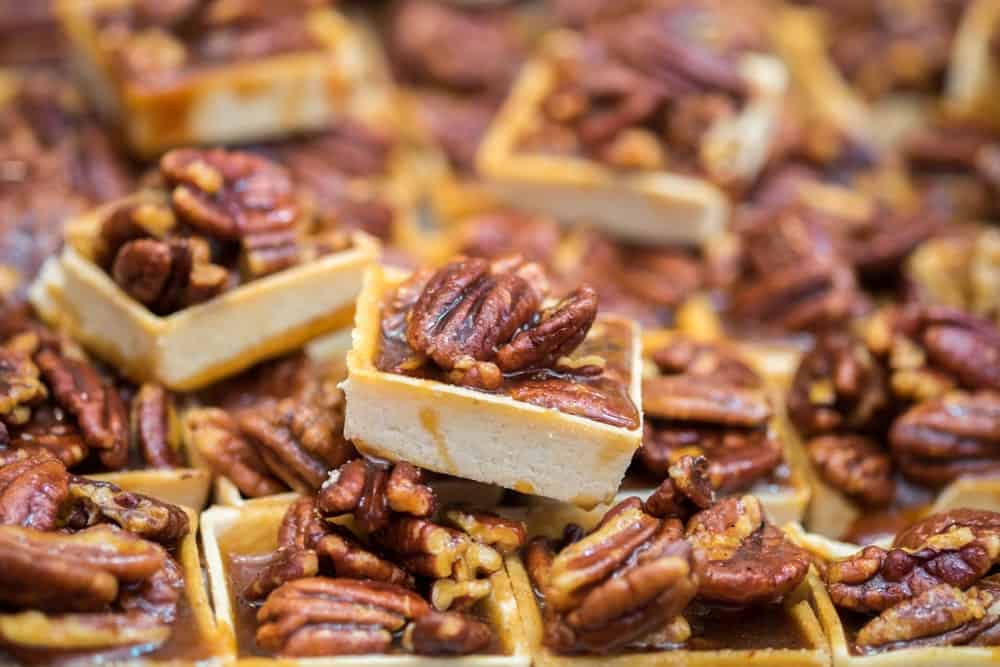 Mahan pecans are soft-shelled, rich in flavor and have nuts that are very large. Even when the tree is young, it will bear lots of pecans, and it also provides shade for your yard. Mahan pecans prefer dry climates and warm winters, with the nuts usually ripening between Nov. 10 through Nov. 25.

Mahan pecan trees, first introduced in Mississippi in about 1910, have been used extensively in creating other cultivars. 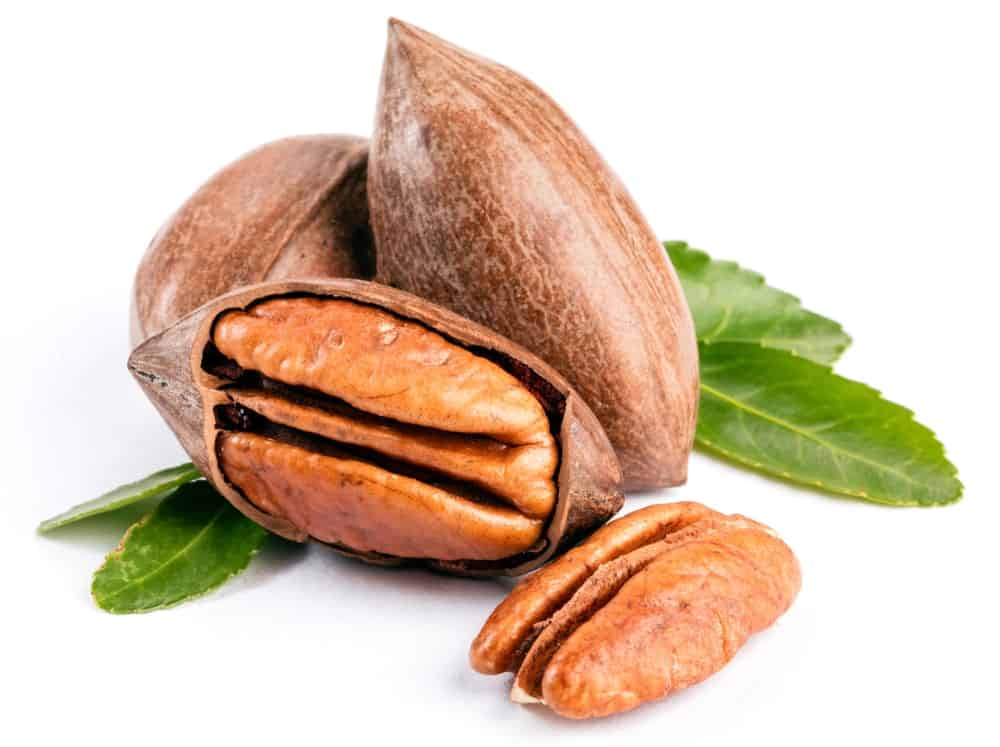 The Moreland pecan tree is very resistant to diseases and produces high yields on a regular basis. They originated from Louisiana, and they are fairly vigorous trees that have dense leaves and nuts. Roughly 55 of these nuts fit in one pound.

Best grown in zones six to nine, Moreland pecan trees can be pollinated by the Desirable pecan tree, which helps them produce medium-thick shells. 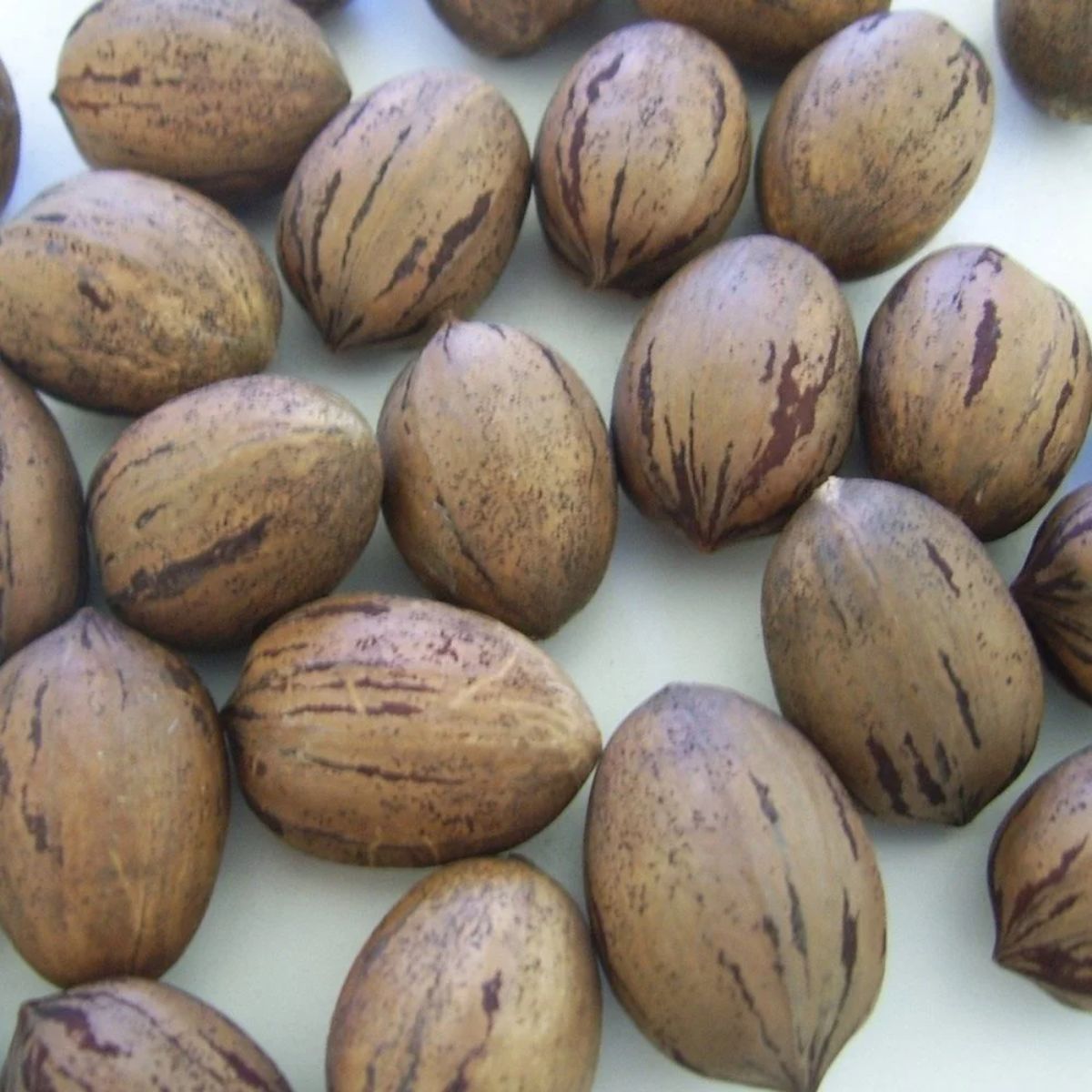 Darker than the Caddo pecan, the Oconee is known to be one of the easiest to shell when it has matured. The Oconee are some of the earliest ready to be harvested, with most by early October. They are native to the Georgia and western Carolina areas.

These trees were specifically made for the northern part of the United States, and they have small to medium nuts that are high in quality and have an oval-elliptical shape. The trees are very resistant to diseases and ripen from early to mid-September.

They are very similar to Elliott pecans, in that they have great oil content, tastes delicious, and make perfect halves. Since pecan production is limited in the northern states, this is a perfect choice if you live up north and wish to plant a pecan tree.

If you want to plant a pecan tree, but have limited space or a small yard, the Pawnee pecan tree might be for you. It is relatively small, only 30 feet tall and 30 feet wide, and it grows from Georgia to Texas.

An excellent pollinator, Pawnee pecans are large and sweet. They are also considered a type of paper-shell pecans, making them easy to crack open. 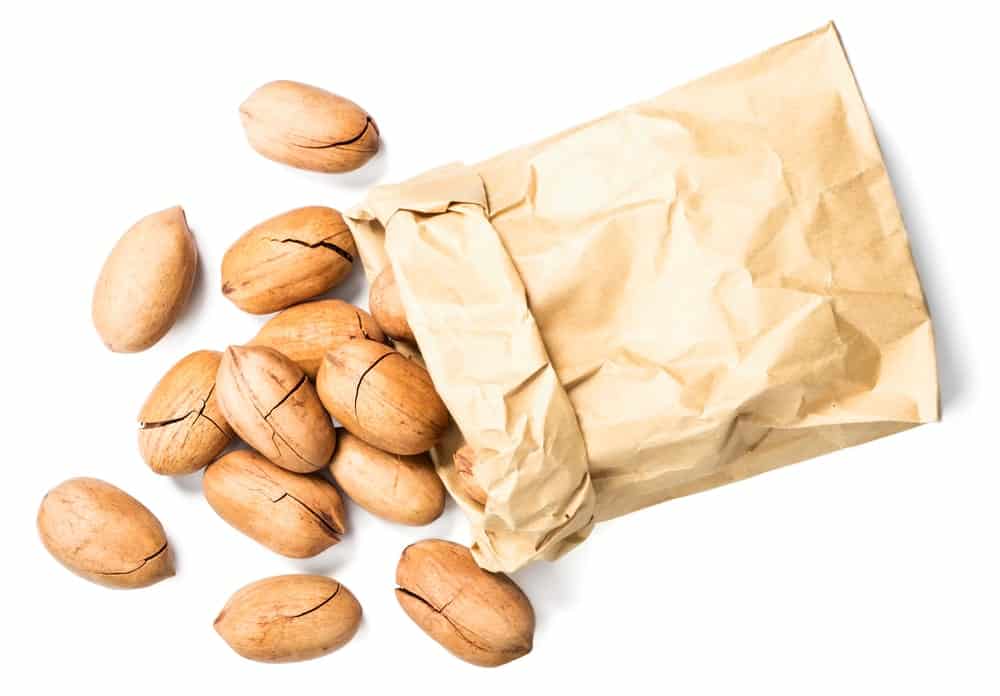 The Schley nut, first planted in Scranton, Jackson County, Mississippi about 1881, is one of the oldest pecan cultivars. Used extensively in breeding, this early variety was first commercially marketed in 1902 as the ‘Admiral Schley.’

The biggest advantage of the Schley is the paper-thin shell, which means anyone can open them. Often used to bake pecan pies, their taste is a bit sweeter than other types of pecans.

Stuart pecans are large, though not as large as the Desirable pecans. The trees are upright and sturdy, and they are mostly found in the Southeastern part of the United States.

They are low-maintenance trees compared to other pecan cultivars, and are late-season pollinators, which means they are best planted with an early-season pollinator. Their medium-size nuts produce roughly 52 nuts per pound, but one of their disadvantages is that it takes eight to 10 years before the tree is of bearing age. 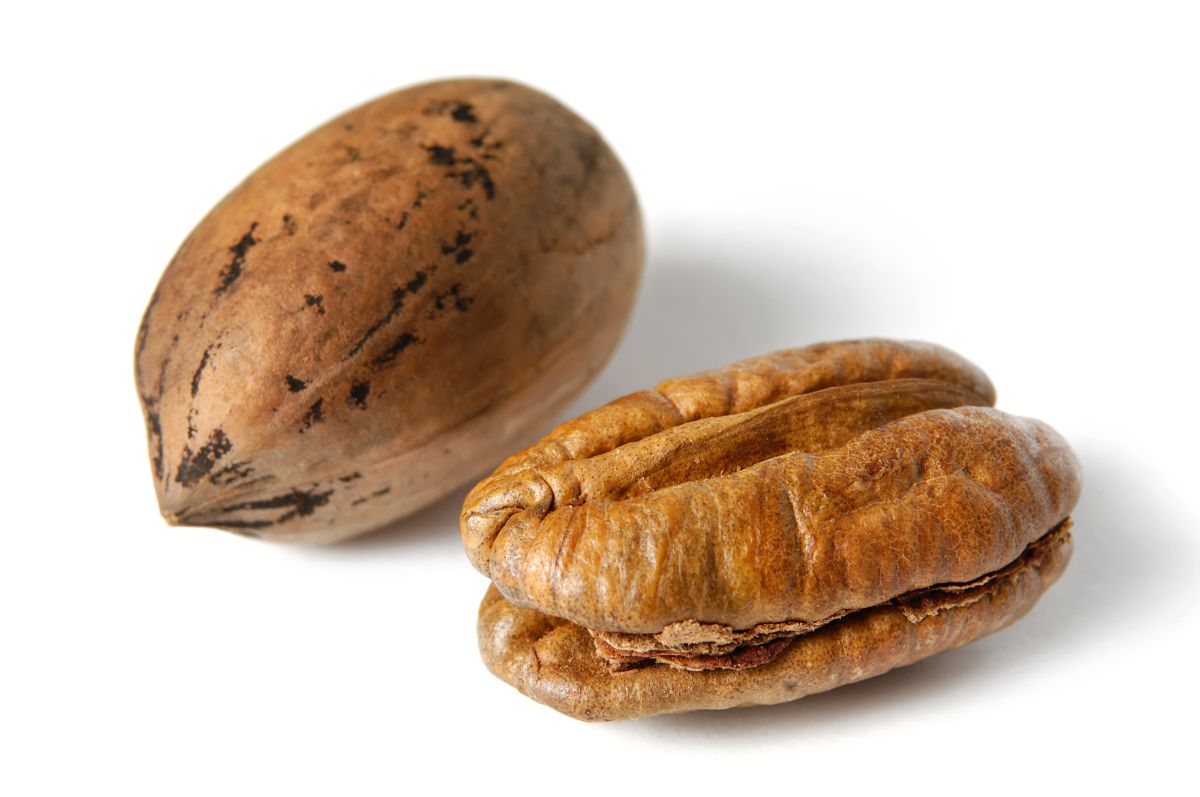 Originating in Southern Georgia, Sumner is a late-season pollinizer and produces very large nuts that fit approximately 48 nuts per pound. The kernels are sometimes darker than other types of pecans, but are of high quality and very tasty.

Are pecans a nut?

Technically, the pecan is a nut because it meets the definition of a nut. It has a hard shell, a protective husk and a single seed.

Are pecans good for you?

They are good for you because they can lower bad levels of cholesterol. They are also a great source of potassium, magnesium and calcium. In addition, pecans help lower blood pressure.

What is the nutritional value of pecans?

How many carbs are in pecans?

One cup of halved pecans has 14 grams of total carbs.

Do pecans have protein?

Yes, pecans have protein. One cup has nine grams of protein.

Do pecans have sugar?

One cup of halved pecans has 3.9 grams of sugar.

Do pecans have lectins?

Pecans are low in lectins.

Do pecans have potassium?

Pecans are low in potassium. Some small amount of pecans contains 116 milligrams of potassium.

No, pecans do not raise your blood sugar. They are low on the glycemic index and even someone with diabetes can eat pecans without worrying about their blood sugar.

In addition, pecans can help slow down the rate at which the body absorbs carbohydrates. This slow absorption helps to keep blood glucose levels down.

Pecans have a high amount of fiber and fatty acid, which is linked to lower cholesterol.

Do pecans have iron?

One cup of halved pecans contains 2.5 milligrams of iron.

Do pecans have Omega-3?

Can dogs have pecans?

No, it would be best if you did not feed pecans to a dog. They are toxic food for dogs. Pecans can cause intestinal blockages, seizures, and other conditions.

Cats can eat pecans, but only in moderation. This is because they are high in fat and should not be a regular part of their diet.

Yes, chickens can eat just about any type of nut, including pecans. Therefore, they can be a regular part of a chicken’s diet.

Yes, squirrels can and will eat pecans. Nuts are a large part of a squirrel’s diet.

Yes, birds eat pecans. They are high in fat, minerals, and protein, making them an ideal food source for birds.

How do pecans grow?

Pecans grow in orchards or groves of trees. A grove is a natural grouping of trees. An orchard is a group of trees that people plant. Pecans will not grow on trees until at least five to seven years once the tree has matured.

When are pecans in season?

Pecans are harvested around the middle of October through November. They are an expensive type of nut. However, they are easy to harvest when you have access to pecan trees.

How are pecans harvested?

Mechanical shakers or machines are used to harvest pecans. They gently shake the trees to cause the nuts to fall without weakening the roots of the tree.

When do pecans fall?

Pecans mature from September to November. When they mature, the husks of the trees turn from green to brown and split open. Then, the nuts are released and dropped to the ground.

Where do pecans come from originally?

Pecans originated in eastern and central North America and along the river valleys of Mexico.

Where are pecans grown?

Can you freeze pecans?

Yes, you can store shelled pecans for as long as nine months in the refrigerator and as many as two years in the freezer.

Can you eat raw pecans?

Yes, pecans can be eaten raw. They are healthy and delicious.

How long to bake pecans?

You should bake pecans for 45 minutes at 170 degrees.

Yes, pecans can go bad. They are high in fat, so they last a long time, but they can get moldy and rancid.

How much does a cup of pecans weigh?

One cup of pecans weighs about 4.4 ounces.

How many pecans are in a cup?

There are about 35 individual pecans in one cup of pecans.