Get to know the different types of pâté, a slow-cooked chunk of meat popularly served traditionally as an appetizer or a first course in meals in French cuisine.

Pâté, pronounced paa tay, is a French word for paste. It is basically forcemeat that is combined with a form of fat, herbs, vegetables, or seasonings to form a mixture that is usually cooked in a dish called terrine. Depending upon the nature of the pâté and recipe, it may be served hot or cold. A pâté is often cooked in a mold to form decorative shapes and is presented in elegant ways. This dish is eaten as an appetizer or a first course in meals.

Pâté is traditionally made with liver mixed with spices and wine. It is cooked until it takes a spreadable form and texture. It can be made with pork, chicken, venison, fish, duck, foie gras, seafood, and even vegetables on some occasions.

Pâté is a wide term that takes this slow-cooked chunk of meat under its shadow. Some pâtés may be fine and smooth while others are rustic and coarse. A pâté is considered a great one if it is decadent and delicious. 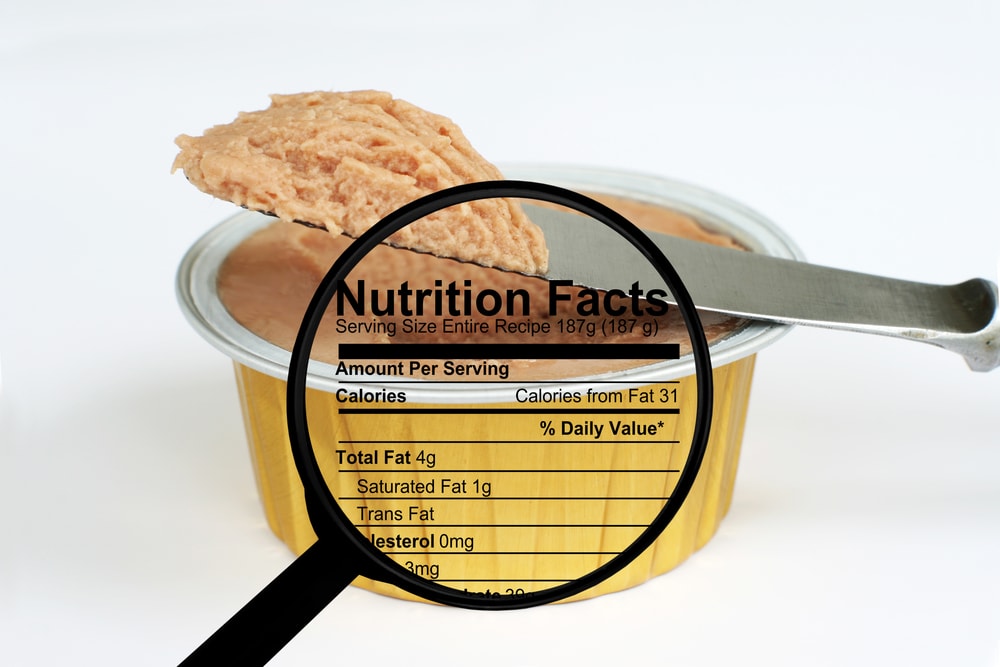 For anyone who wants to know the exact difference between the two, we have chalked it out in detail. Terrine is a dish that is made from ground meat, seafood, organ meat, boiled eggs, vegetables, herbs and other seasonings that are layered in a steel or ceramic, loaf-shaped mold.

The layered mixture is then cooked in a water bath, cooled, and is then served as slices. Sometimes, a layer of aspic (infused gelatin) is set on the top of the dish to add a decorative effect to the serving. At times, a terrine may be half-cooked, wrapped in a puff pastry and baked. This dish is called pâté en croute.

While terrine is cooked in a loaf-shaped mold, pâté is simply a blend (fine or coarse) of ground meat, herbs, organs, vegetables, or seasonings. It may contain milk for a smoother texture or eggs to help it set in the mold. Pâté most commonly forms a layer in the making of terrine, or it may even be as simple as a chicken liver mousse. However, due to the similarity in the basic recipes, you may use the terms interchangeably. 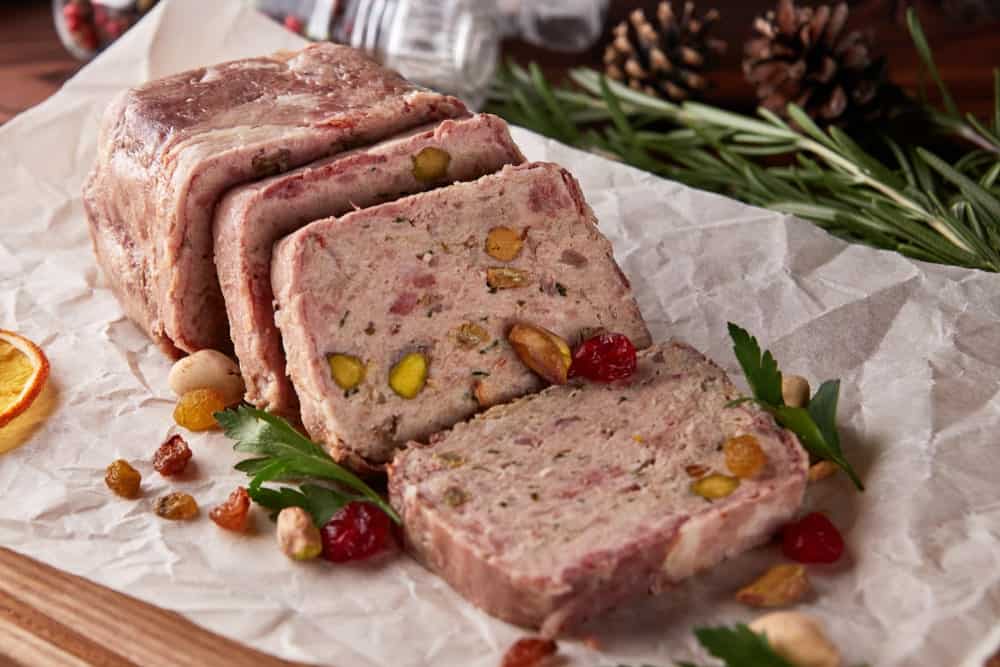 Pâté is a very popular part of French menus. The types of pâté have been detailed below!

The coarse texture of country-style forcemeat is achieved by a simple process of grinding pork through a coarse die. The characteristic feature of this type of forcemeat is that it contains two different grinds of meat and an addition of a panada.

It is made by grinding the meat and the fat separately. The meat is ground twice, and the fat is ground once. The fat is then mixed in with the meat. Sometimes, the meat and fat may be ground together and then blended in a food processor for quicker preparation. The recipes that make use of Straight forcemeat involve the addition of crushed ice to reduce the temperature, minimize the friction, and add moisture.

Mousseline forcemeat is airy, light, and flavored quite delicately. It is usually made with shellfish and fish, but pork, veal, poultry, or feathered game may also be used sometimes.

Cream and eggs are added to make this type of forcemeat. To make mousseline forcemeat, the meat is processed with cream in a food processor. Egg whites are added to lighten the mixture. However, the fish to egg to cream ratio should be balanced critically. If too much egg white is added, the forcemeat will become rubbery. If too little egg white is added, the forcemeat will not bind together. Too much cream will make it too soft.

Mousseline forcemeat can be served cold or hot. It can be used to make fish sausages, terrines, timbales, or quenelles.

Many types of pâté can be found on French menus. Some of the most popular ones have been listed down for you.

Pâté Chaud is a liver and/or meat pâté that is served hot. It is more commonly known as Bánh patê sô, which is a Vietnamese term that means “hot pastry.” This pastry has an outer crusty layer with a meat filling inside. The filling is made with pork meat, but beef and chicken are also common. Although this pastry is French-inspired, it can be commonly found in bakeries in Vietnam.

Pâté grandmère originated in Gascony. It is a region that is rich in Armagnac, prunes, and flavors. This dish is a classic charcuterie’s dish. It is a chunky terrine that is made from three different varieties of meat, including bacon, liver, and boneless leg. This combination gives Pâté grandmère a superior taste as compared to other types of pâté. The pork meat is cooked with sugar, salt, pepper, shallots, lard, whole milk, eggs, bread crumbs, and soft Omerta. It is one of the most-liked pâté dishes.

Pâté de Campagne is commonly known as the country terrine. It is the easiest and most inexpensive terrine to prepare. It uses inexpensive trims and cuts of meat and can be garnished with whatever is on hand.

It is more refined than the Pâté grandmère. It has a rustic preparation that contains a small amount of liver meat. The liver is used as a seasoning in this type of pâté rather than being used as a dominant flavor.

The internal garnishing is done with fresh herbs, duck confit, and chunks of smoked ham. The panade is made with flour, which helps in the retention of moisture and also helps to bind the pâté. The meat is ground through a large die, and none of the meat is pureed to achieve a coarse texture that is characteristic of a country terrine.

The practice of force-feeding the geese and ducks is as old as 400 B.C. However, the dish Pâté de Foie Gras became popular in 1779, after Jean-Joseph Clause, a French chef created and popularized it.

Pâté de Foie Gras is spreadable pâté. Any dish that contains foie gras is subject to regulations by the French government. According to the law, Pâté de Foie Gras should contain at least 50% fattened duck or goose liver while the other 50% should consist of chicken liver, pork, and eggs.

Pâté de Gibiers, or the Wild Game Pâté is made from farmed animals. If pâté is made during the hunting season, the name on the menu would be Menu de la Chasse. However, if pâté is really made from the meat of wild animals, it is usually listed as Pâté de Gibiers Sauvage. The hunting of wild animals is legalized for a short season. These animals include wild boar (sanglier), pheasant (faisan), roe deer (chevreuil), quail (caille).

Pâté en Croûte or the pie-crust is a pâté baked in a pastry covering. The crust of the pie is cooked in a terrine. According to regulations, the dish should contain at least 50% of the meat that the dish is named after.

Pâté en Croûte was one of the major cuisines in castles in the Middle Ages. Initially, the crust was not meant to be eaten but was made to keep the meat preserved for longer. However, with time, the crust became consumable.

Pâté en Croûte is usually made with pork and veal. However many variants are available today, majorly the ones with poultry. It may be filled with a game on its own or in combination with different flavored stuffing such as pistachio and mushrooms.

Pâté en croute Richelieu is a common variant that is made by filling the mousse of chicken livers in the center of the pastry.

Champagne-Ardenne consists of a pie-crust that is a lot like pastry. It contains minced pork with pieces of rabbit meat, veal, poultry, or pork which is marinated. This dish is served hot with a green salad.

Pâté Lorraine is a traditional pâté that is made from pork meat and shallots, sometimes mixed with veal. It is made with a pastry covering with pork filling inside. It can be served either hot or cold.

Hénaff is one of the largest producers of pre-prepared pâté which is widely available throughout France.

Paté Vigneron contains sliced pork that is cut into strips. The pork is marinated with onions, parsley, white wine, and spices. It has a puff pastry covering.

As mentioned above, pâté is a French word for paste. There are numerous ways in which you can enjoy some mouthwatering pâté.

Pâté is an extremely versatile dish that can be used with salads, on meats, with potatoes, and with cheesy-meals. It provides endless possibilities and gives you an open field to try your creativity!

Pâté is packed with nutrients and calories. Although the serving size is relatively small, they are loaded with calories – up to 90 calories per ounce. When you add pâté to your diet, you are not only feeding yourself essential micronutrients but also increase the intake of cholesterol and fat. Pâté is associated with numerous health benefits, which are as follows:

Pâté is a rich source of iron and copper. The copper that you take in through your diet activates cuproenzymes that are vital for the good health of the body. They increase the efficiency of the brain cells and also aid in the production of essential proteins.

A pâté serving of 1-ounce contains about 113 micrograms of copper. The iron content of pâté (1.5mg per serving) also makes an essential component of enzymes that generate energy. It activates hemoglobin and myoglobin, which increase the efficiency of the body to transport and store oxygen.

A 1-ounce serving of pâté contains 936 IU of Vitamin A (40% of the total daily recommended intake for women and 31% for men). Each serving contains 0.91 micrograms of vitamin B-12 (38% of the recommended daily intake).

A single serving of pâté contains 0.17 milligrams of Riboflavin (13% of the recommended daily intake for men and 15% for women) and 11.8 micrograms of Selenium (21% of the daily requirement). Riboflavin or Vitamin B-2 plays a vital role in metabolic functions. It is required in the process of nutrient breakdown.

Selenium, on the other hand, activates certain proteins that participate in the regulation of the immune system, development of sperm, and support of thyroid function.

Although pâté is served in small quantities, the benefits it delivers are quite big, which makes this French dish one of the healthiest dishes to incorporate into your diet.

Cautions to Be Taken with Pâté

Although pâté is a great source of essential vitamins and minerals, it holds risks for your cardiovascular health. Therefore, it should be consumed with caution. As you know by now, pâté is made with meat and fat, which makes it a rich source of fat and cholesterol.

A 1-ounce serving of pâté contains 8 grams of fat (2.7 grams are saturated fatty acids). Too much fat or cholesterol is harmful to a person’s cardiac health and if not taken care of, may lead to serious cardiovascular diseases.

Pâté is a popular French dish for all the right reasons. It delivers an unmatched blend of flavors with impressive versatility. It is also a great way to preserve meat for longer. It makes a remarkable appetizer and snack for parties and provides you with innumerable possibilities of adding it to your diet any way you like. With so many types of pâté, you can never complain about not finding the one that suits your taste buds! Once you get used to the flavor, you will not be able to get enough of this amazing dish!