Who knew there are many different types of mustard to choose from? Find out all about the mustard variety that can be found all over the world and in many cultural cuisines. 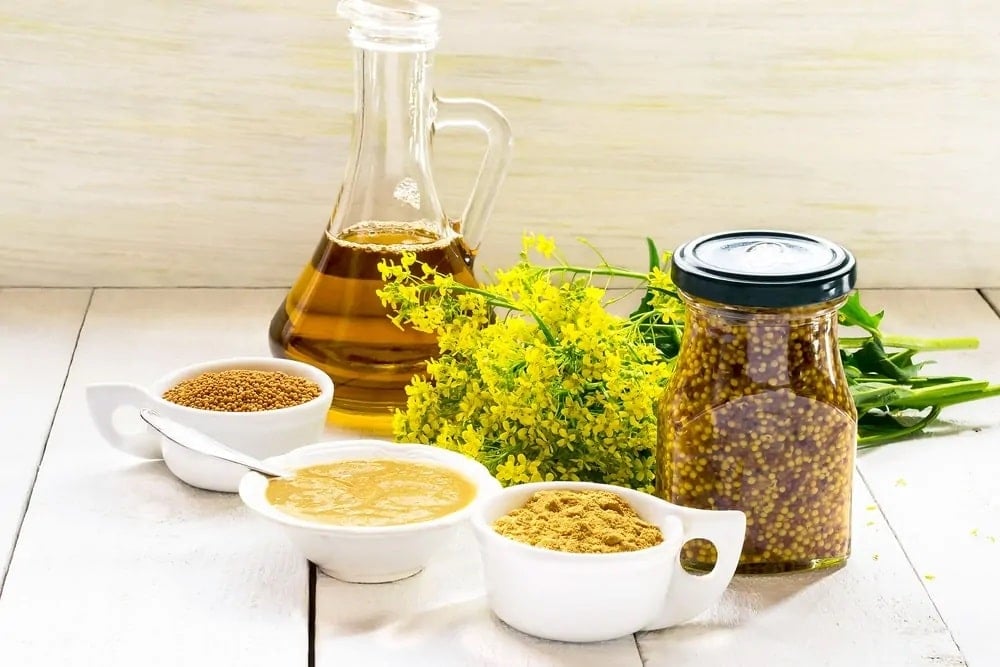 Mustard is a much-beloved condiment that is made from the seeds of the mustard plant. There are three types of mustard plants – white/yellow, brown/Indian, and black mustard. Mustard is a popular condiment in Asia, the Mediterranean, southeastern and northern Europe, America, and Africa –basically, the world. This is why it is considered to be one of the most popular and widely used condiments and spices in the world.

Mustard is commonly paired with cheeses and meats since the flavor profile brings out the taste of such items. It can be added to hamburgers, sandwiches, hotdogs, and corn dogs, as per your preferences. The mustard seeds are cracked and ground – whole or bruised, depending on the kind of mustard you are planning to make.

They are then mixed with wine, lemon juice, vinegar, water, salt, spices, and more to create a sauce or paste. Grinding the seeds and mixing them into a liquid of your choice will help release the oils and enzymes that give mustard the bite it has. The color can go all the way from a bright yellow to dark brown. The mustard can taste spicy to sweet.

However, if you are tired of the same old yellow mustard, there are plenty of options you can try. Check out the different kinds of mustard to find the one you like the best! 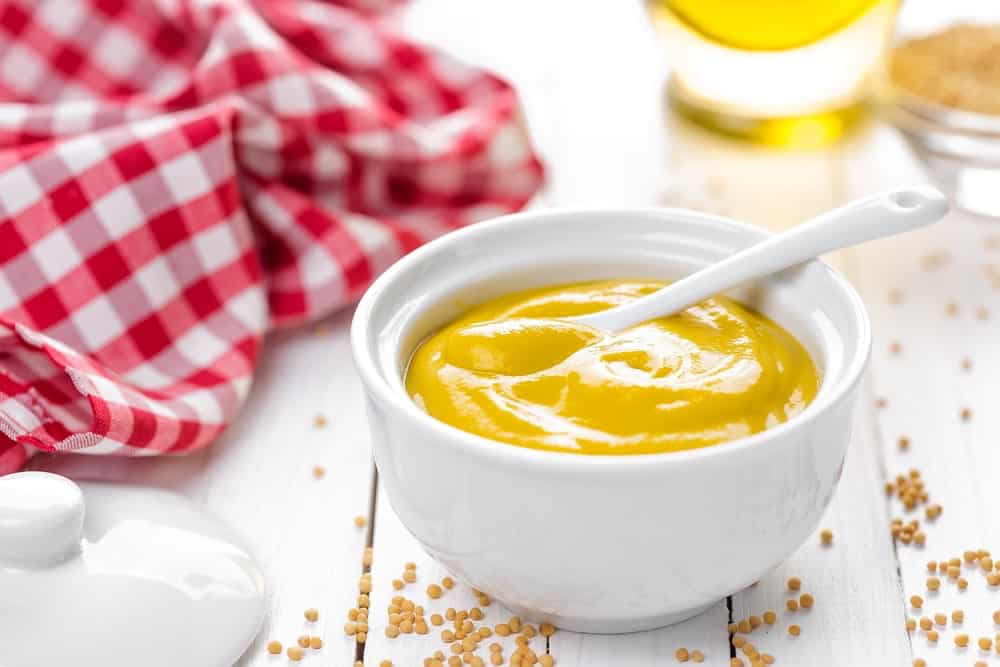 American Mustard is also called yellow mustard due to its distinctive bright yellow color that comes from turmeric in the formula. It is slightly milder mustard that can be found in any American cookout that has burgers or hotdogs. It is commonly just referred to as ‘mustard’ in the local language. Experts conclude that it was introduced by George J. French in 1904, who called it ‘cream salad mustard.’  It is a common ingredient in barbecue sauces, salad dressings, and potato salads. 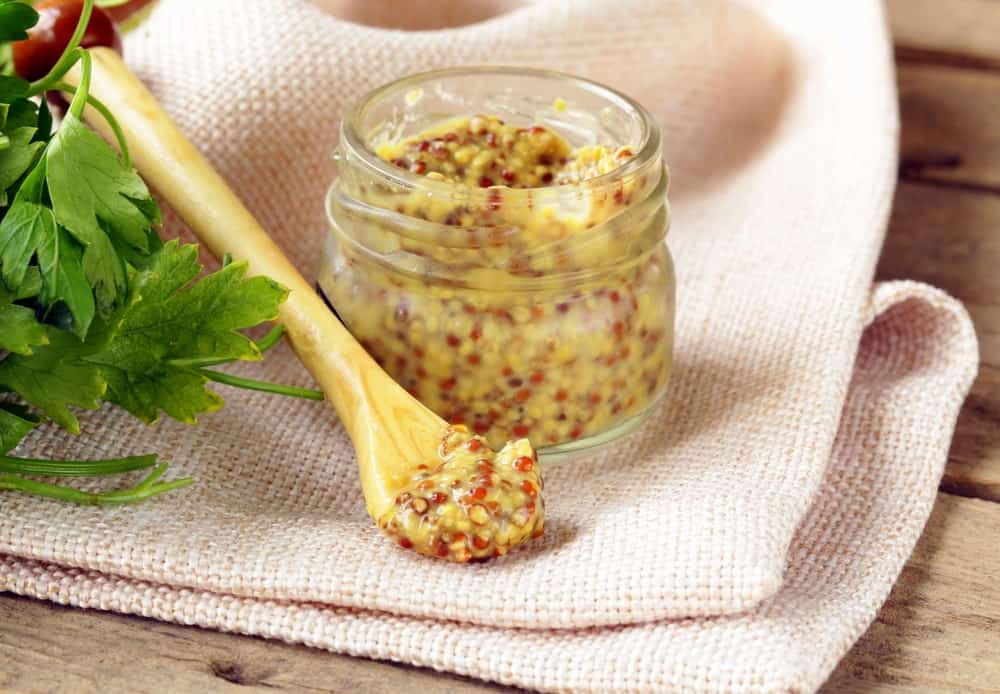 Dijon mustard has a smooth consistency like yellow mustard but a sharper, more complex flavor profile. The classic French mustard called Dijon mustard has been around since the 1850s. Jean Naigeon of Dijon, in 1856, used acidic ‘green’ juice from unripe grapes called verjuice as a substitute for the vinegar to make mustard. However, the modern Dijon mustard is very different from the original recipe since it uses white wine instead of verjuice which can be quite tangy. 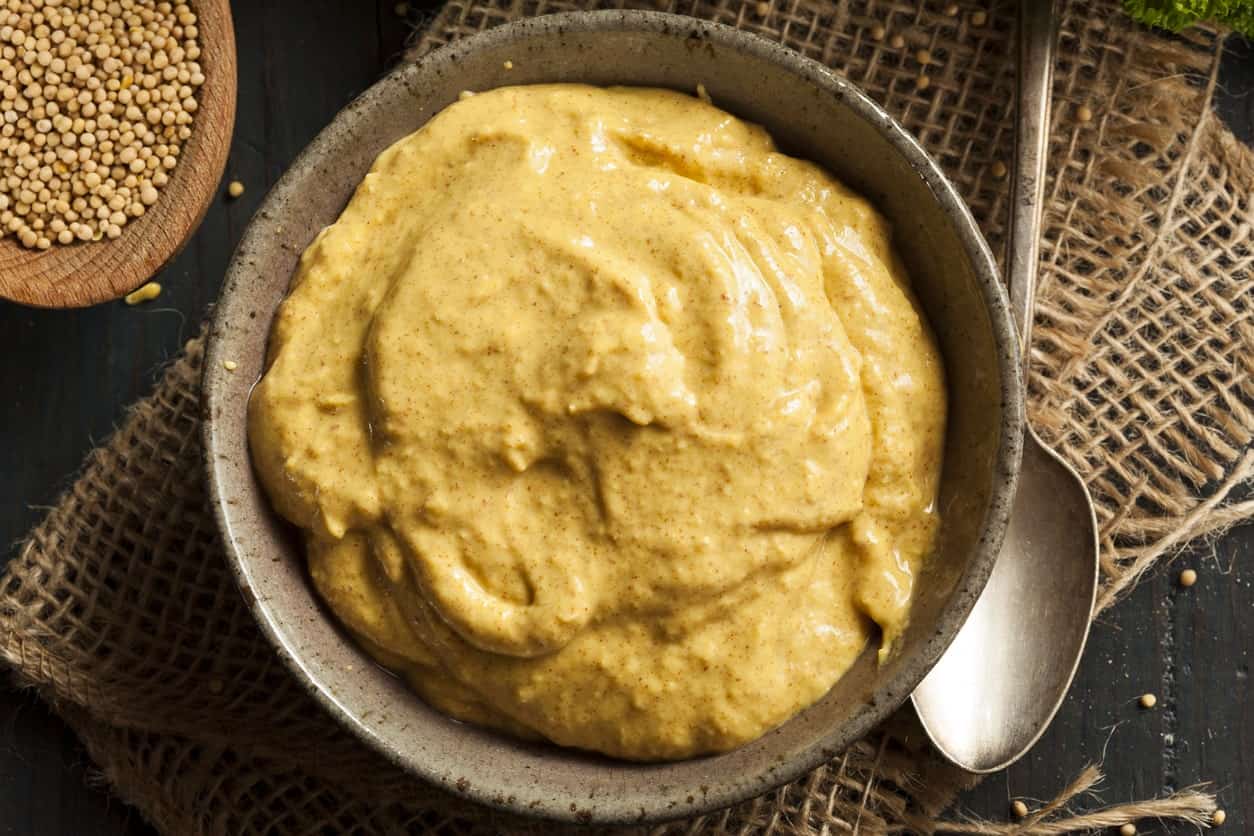 Spicy brown mustard is also pretty common in the US. It has a slightly coarser texture than Dijon or yellow mustard due to the different grinding techniques. This gives it a speckled brownish-yellow color and you can see the standard white/yellow mustard seeds in the mixture.

It has a deeper and spicier flavor than yellow mustard, which makes it really popular in delis. This is why it has earned the name ‘deli-style mustard’ but you can also find it on New York hotdog carts. Some delis also incorporate horseradish into the mustard to make it even spicier. The mustard goes really well with rye and pastrami combos. 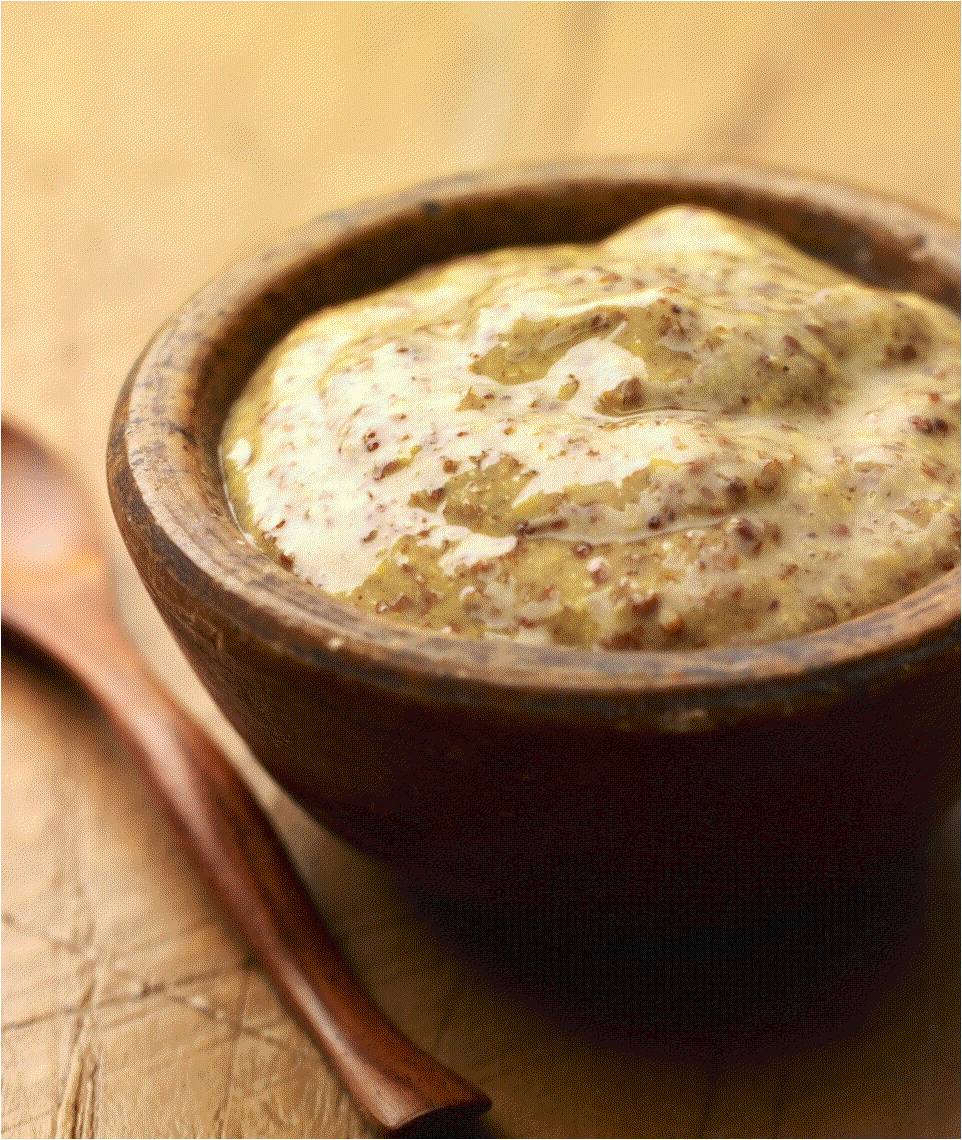 Creole mustard is a popular condiment which has originated from the Southeastern region of the US. It is specifically part of Louisiana cuisine, especially New Orleans’ food. It goes well with food inspired by German, French, African, and Spanish foods.

Creole mustard has a grainy look and a unique tangy taste due to the higher concentration of mustard seeds used in the mixture. It is commonly used in sauces, dressings, and dips for po’ boy sandwiches, chips, pretzels, salads, and more. The Creole mustard is also used to marinate different foods, especially seafood dishes like crab cakes. The mustard is also served as a glaze or dipping sauce with many dishes. 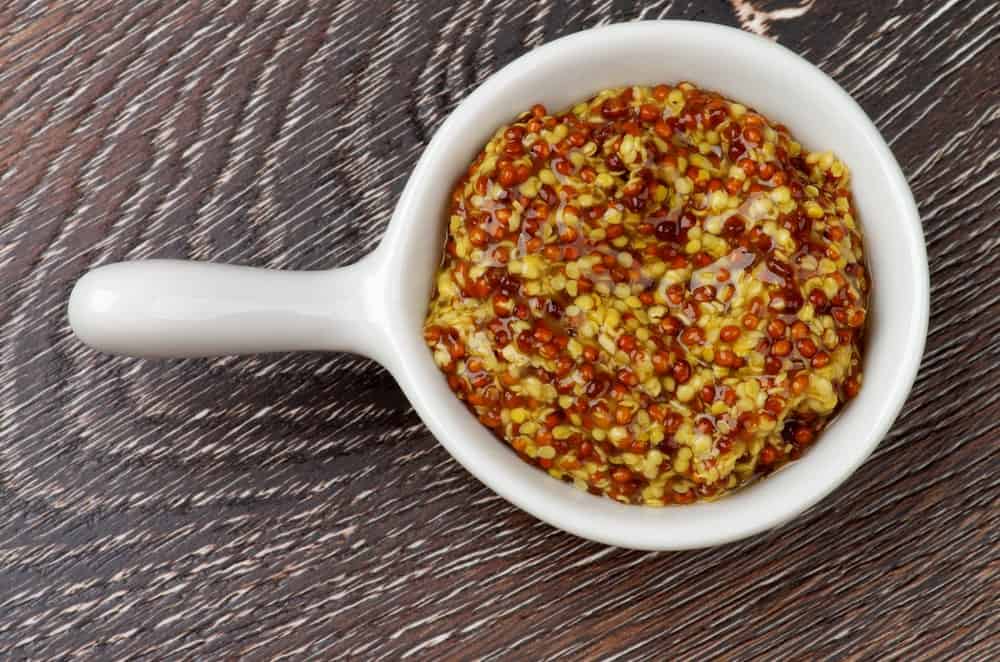 Whole Grain Mustard is also known as granary mustard in some regions. The seeds are mixed into a liquid of the manufacturers’ choice with a few other ingredients. You can combine diverse strengths and flavors with blends of mustard seeds from different plants. One common mustard plant, called the Groningen mustard, leads to mustard with grains that have been partially ground.

Since the blend of mustard seeds and various liquids is different from region to region, it is given names like ‘old style’ and ‘country’. You can easily tell this mustard apart since the whole grains are clearly visible. This mustard has a thick texture and creates a unique flavor profile in dressings and sauces. 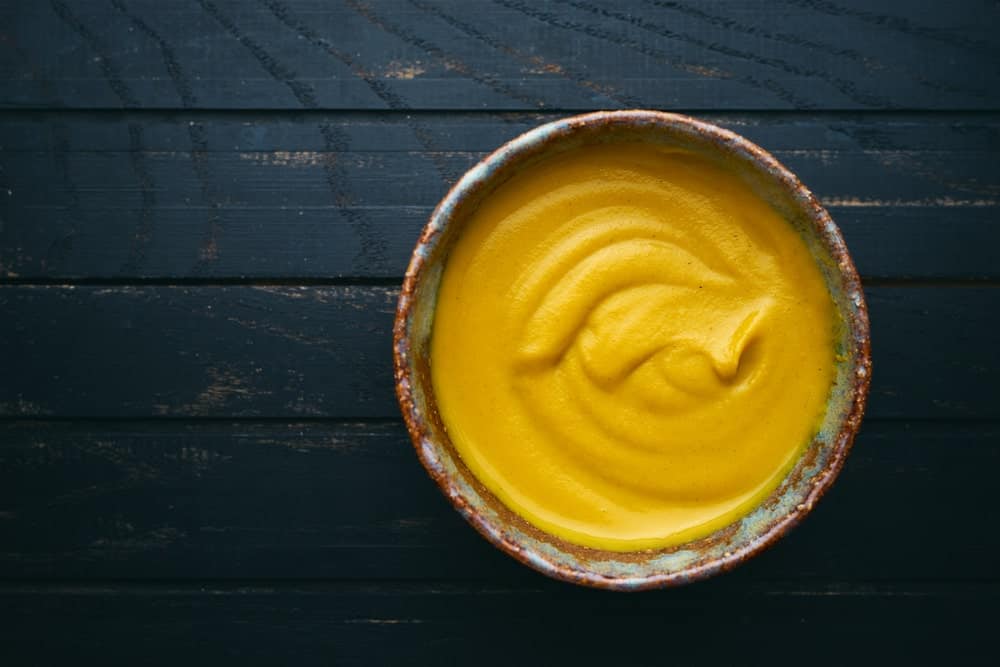 English mustard looks pretty similar to American mustard but it has a thicker, spicier profile. The most famous and commonly used brand for English mustard is Coleman’s. They have been producing powdered mustard that comes in a yellow-colored tin since 1814. Smoother English mustards have also emerged since the 1850s. William Taylor from Newport Pagnell was the first person to sell prepared English mustard. The mustard will ensure that you get some serious heat on your sandwich. 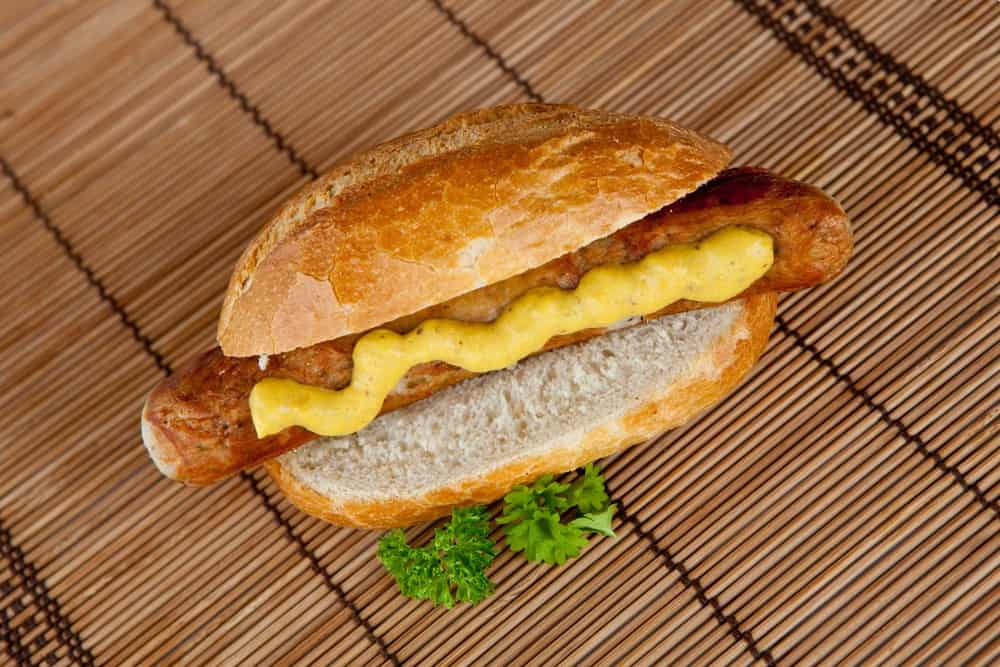 Mustard has been popular since medieval times in German cuisine. It is popularly known as Senf and was used for medicinal purposes during the Dark Ages. At times, it was also used to flavor bland foods since there was a general lack of spices in the country.

German mustard has three main types of mustard condiments that are used commonly. Senfkörner is used to season meat and sauces and has a whole seed base. On the other hand, Senfpulver comes in a dry powder form which is often used in cooking and mixes well with other ingredients while Senf is a paste and is the most common out of all types. Keep in mind that Senf comes in two main flavors –Düsseldorf and Bavarian Sweet.

Düsseldorf Senf has a sweet and sour taste and is popularly served with a dish called Mostertpöttche. It also inspired a really popular painting by Vincent Van Gogh. It can be made with beer, brandy vinegar, and plenty of other liquids. It is similar to Dijon but has a more pungent flavor profile. The oldest Düsseldorf Senf was made in 1726 by Adam Bernhard Bergrath (ABB). 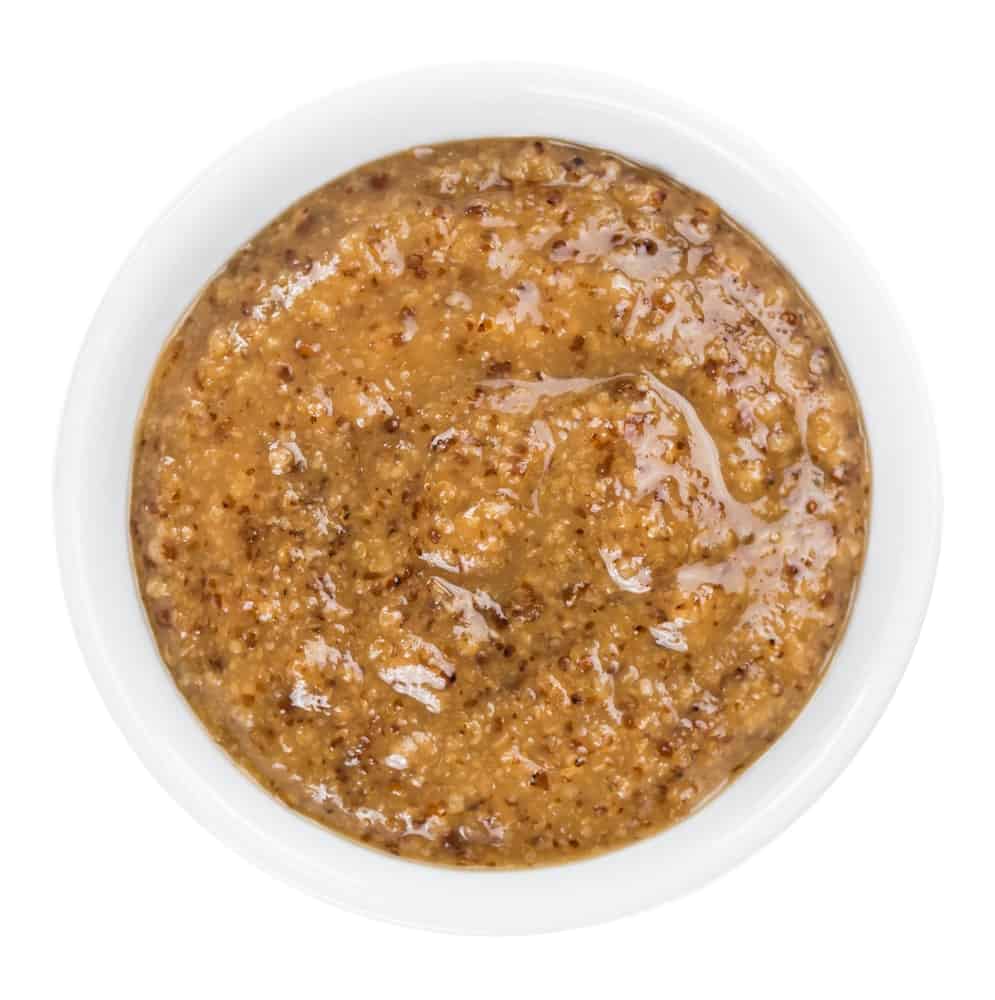 Sweet mustard is really popular in Bavaria where it is made from kibbled mustard seeds. The mustard is sweetened with apple sauce, honey, or vinegar and is usually served with Leberkäse (similar to bologna sausage) or Weißwurst (German sausage). It is called Weisswurstsenf in Bavaria, which means ‘mustard for Weisswursten.’ Variations of sweet mustard are also used in Austria and Switzerland. It goes really well with meat, which is why it is commonly used in burgers, hotdogs, and sandwiches.

Bavarian sweet mustard was invented by Johann Conrad Develey in Munich in the 19th century. His recipe included vinegar, sugar, brown and yellow mustard seeds, and spices. He boiled the mixture by sticking hot pokers into the blend. In 1854, he used brown sugar instead of white sugar which made the mustard browner and sweeter. 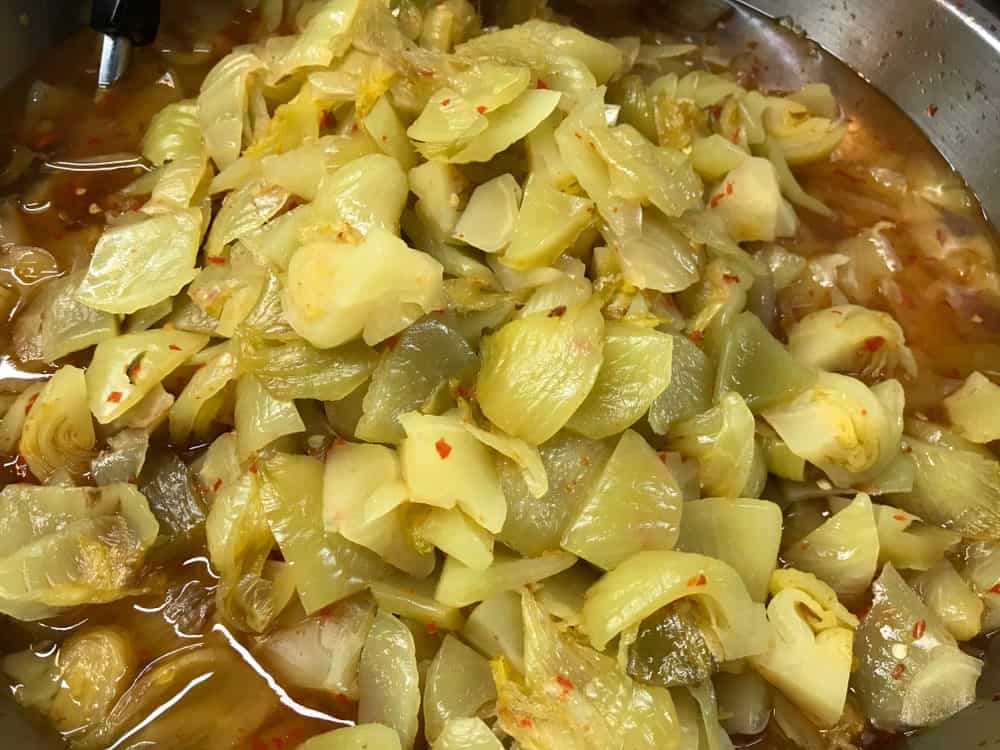 Chinese hot mustard is a popular condiment known for its sharp, spicy flavor. It can be made fresh by adding the dry mustard powder to water. Some recipes call for cooking it with rice vinegar and sesame oil in a pan using vegetable oil. The brown mustard seeds that are used for prepared Chinese mustard are stronger than the white and black seeds used for other mustards.

Chinese mustard isn’t used for cooking but rather as a condiment. It spices up meat, appetizers, and salads. It will definitely clear your sinuses and tastes absolutely delicious with fried egg rolls. 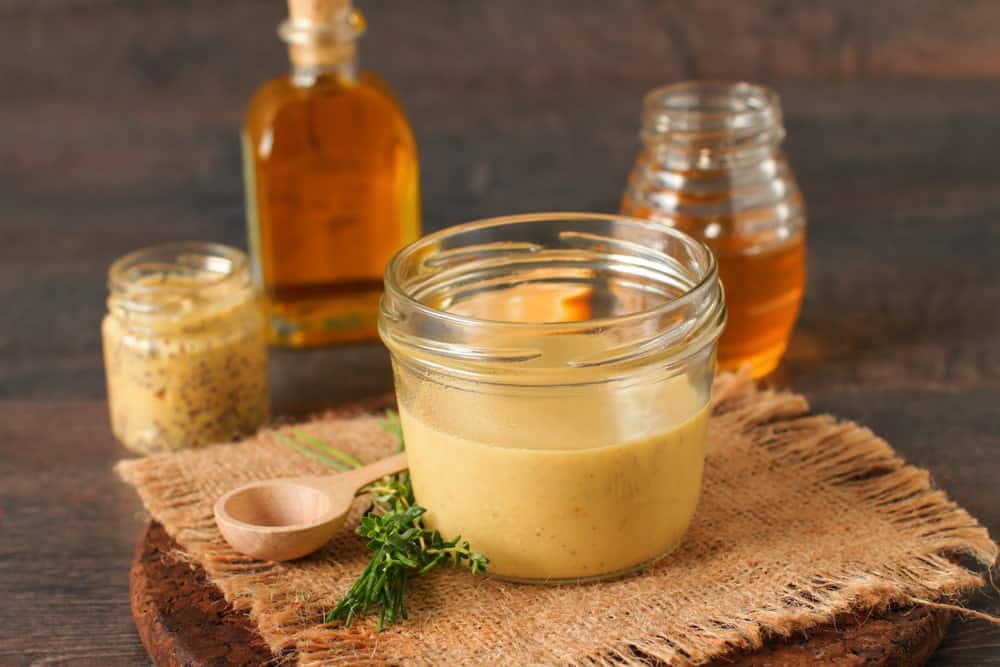 Honey mustard is a 1:1 ratio blend of honey and mustard. It is commonly used as a dip for finger foods like chicken strips or sandwiches. It goes really well with ham since the sweet, tangy taste brings out the flavor profile of the meat. It can also be combined with olive oil or vinegar to make a dressing for a salad. In British cuisine, combinations of Demerara sugar and honey are used to coat lamb cutlets and pork chops before grilling. 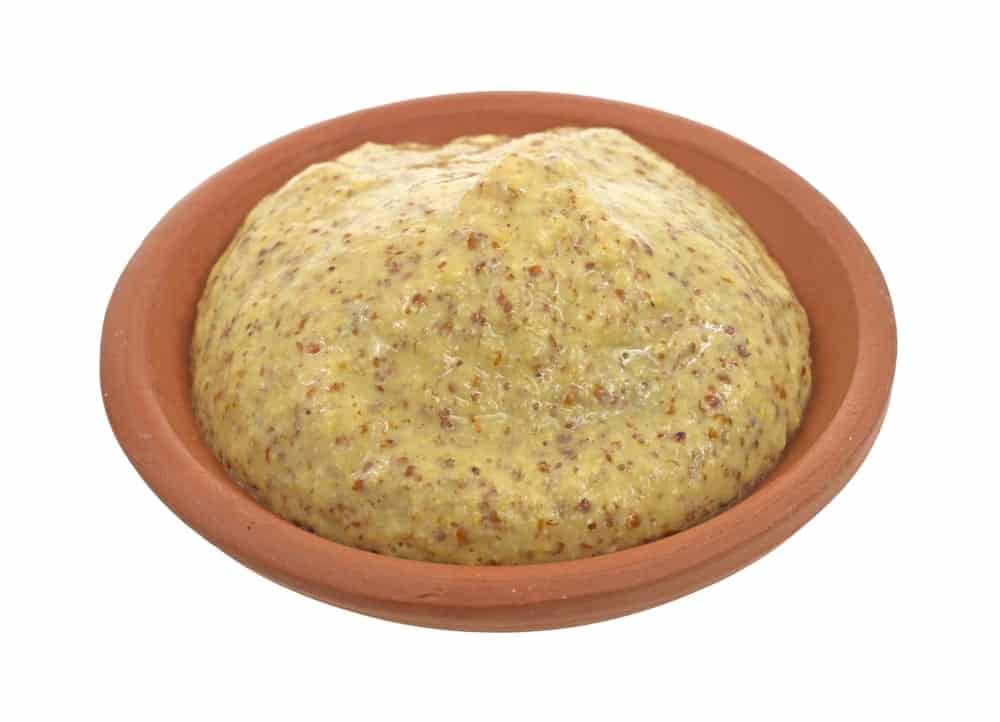 The horseradish root is grated or cut, which produces certain enzymes that are responsible for producing spicy mustard oil. The grated mash is then mixed with vinegar for preservation to bring out a nice and tangy spicy flavor that is loved by many.

The most popular horseradish mustard is a UK brand called Tewkesbury mustard, which originated in medieval times. It was even mentioned by Shakespeare in Henry IV Part II where a character called Falstaff says “his wit’s as thick as Tewkesbury Mustard”. Similar mustard is also popular in Eastern Germany and Austria where it is called Meerrettichsenf or Krensenf. 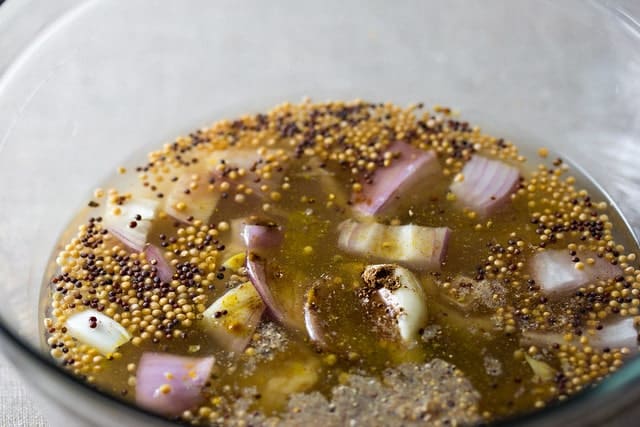 Beer mustard is a mixture of yellow and brown mustard seeds with beer instead of vinegar. It was created in the Midwest region of the United States in the 20th century. It has a remained popular local condiment since it goes really well with Midwestern barbeque. It has a slightly malty flavor and all the bitterness of the beer. If you like beer, this is definitely the type of mustard you should try spreading on your sandwiches, soft pretzels, BBQ, and burgers. 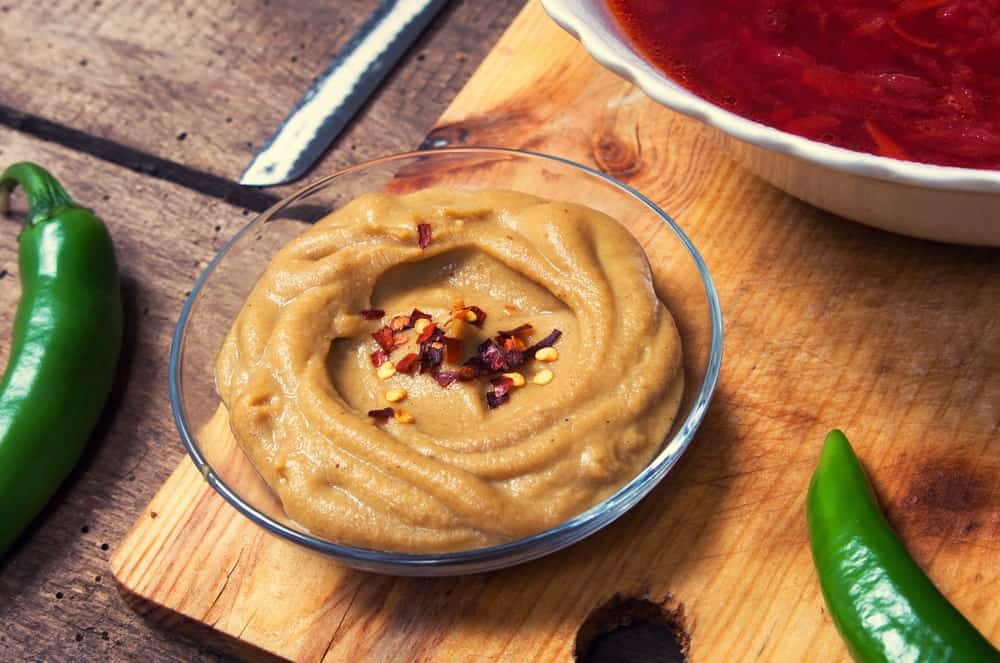 Some people want their mustard spicy enough to have them reaching desperately for ice cream or milk to calm their taste buds. For such people, Hot Pepper Mustard is the perfect condiment to add to their chicken, barbeque, sandwiches, burgers, and hotdogs. You can use any variety of chili peppers from Jalapenos to Habaneros for your mustard, depending on your spice resistance. You can also choose to add hot sauce like Sriracha or Tabasco to give your mustard a little extra kick. Different mustard bases can be used to make this including brown, yellow, and spirited.

Mustard and fruit were a popular combination in the 14th century when Lombard created the ‘mostarda di Frutta’. To make this mustard you have to preserve large chunks of your favorite fruit in hot, sweet mustard syrup. This blend was usually served with meat, especially during the rule of Dukes of Milan. Traditional types of fruit mustards include quince mostarda, cherry mustard, and apple mustard. Quince Mostarda has a jam-like appearance and is quite mild in taste.

Mustard is a popular condiment that varies in appearance, taste, texture, and uses from culture to culture. It is a very versatile condiment that has been part of all kinds of cuisines for centuries.