It's time to get your facts straight about the mushrooms and learn more about them by getting to know its many different types and the special distinctions for each. 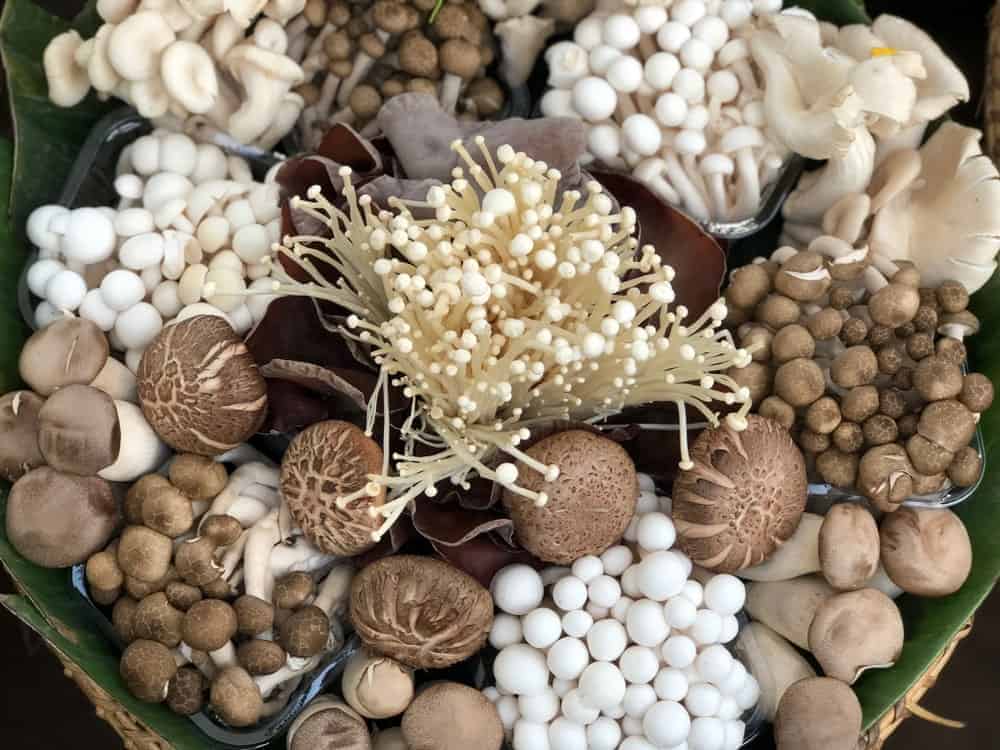 How many different types of mushrooms are there you ask?  Quite a few.  Check out our detailed chart and list below including common mushrooms, black mushrooms, white mushrooms, colorful mushrooms as well as details to learn a whole lot more about medicinal mushrooms.

Mushrooms are a type of fungi that existed on the planet since the beginning. Even before trees sprung up on Earth, giant mushrooms that reached 24 feet in height and three feet in width covered the ancient landscape. There are about 10,000 named species in North America, which make up just a third or a fifth of all existing mushrooms.

In terms of percentages of all the mushrooms that’s out there, half are inedible but harmless, a quarter is edible but not incredible, 20 percent will make you sick, four percent will be tasty to excellent, and one percent can kill you.

All over the world, mushrooms have been consumed as food or used for medicinal purposes. It is said that the Egyptian pharaohs loved their mushrooms so much that they declared it food for the royalty and banned the commoners from eating them.

The upper classes in ancient Greece and Rome, on the other hand, used mushrooms in their cuisines. The Romans also employed tasters to make sure that the mushroom is not poisonous. 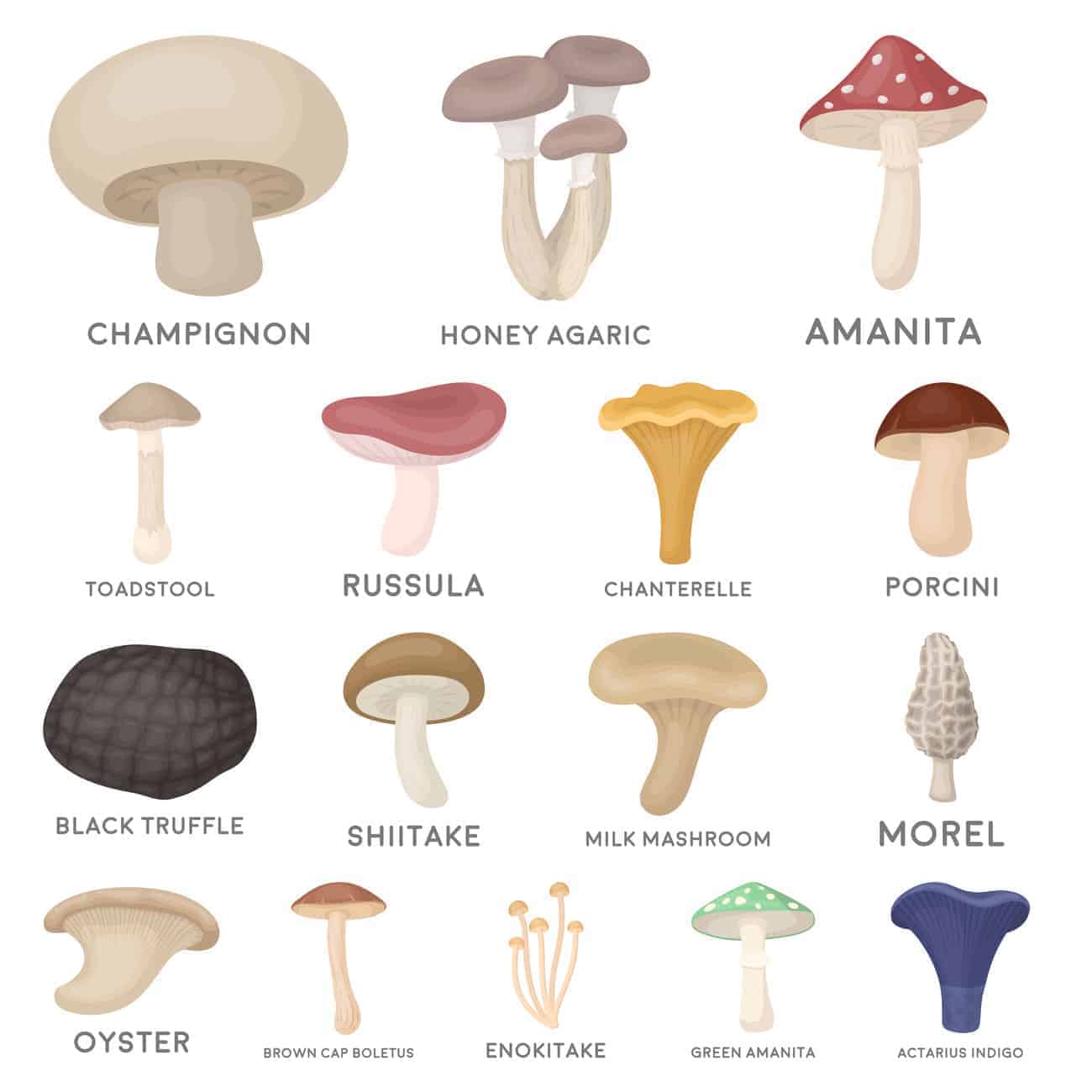 Full List of Mushroom names (with photos in alphabetical order) 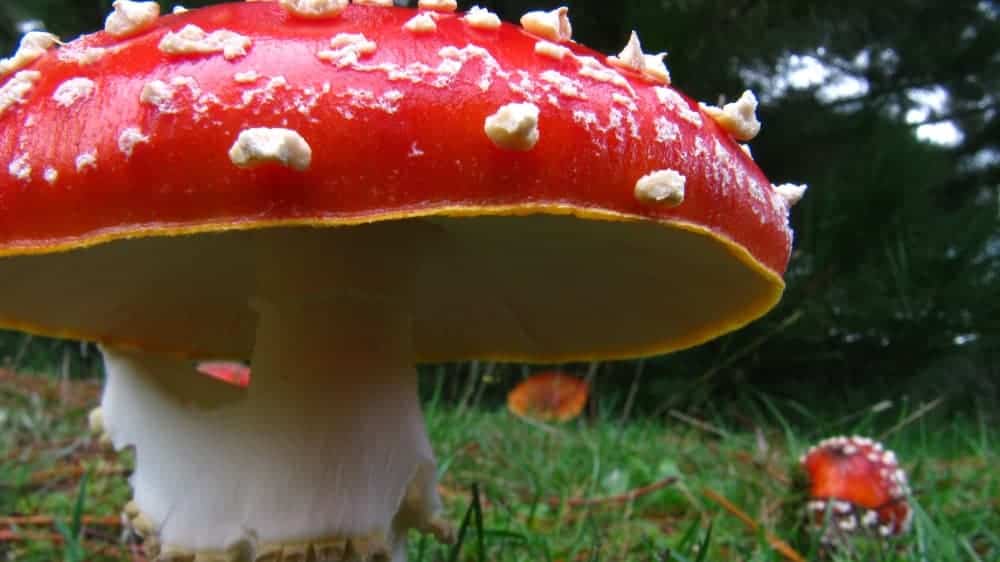 What kind of mushroom is this, you might ask? It’s peculiar looking for sure.  It’s an Amanita Muscaria or fly agaric is a psychoactive fungus that attracts and kills houseflies. The genus Amanita has about 600 mushroom species, including some of the most toxic ones.

Where do amanita mushrooms grow?  Eastern and southeastern North America. 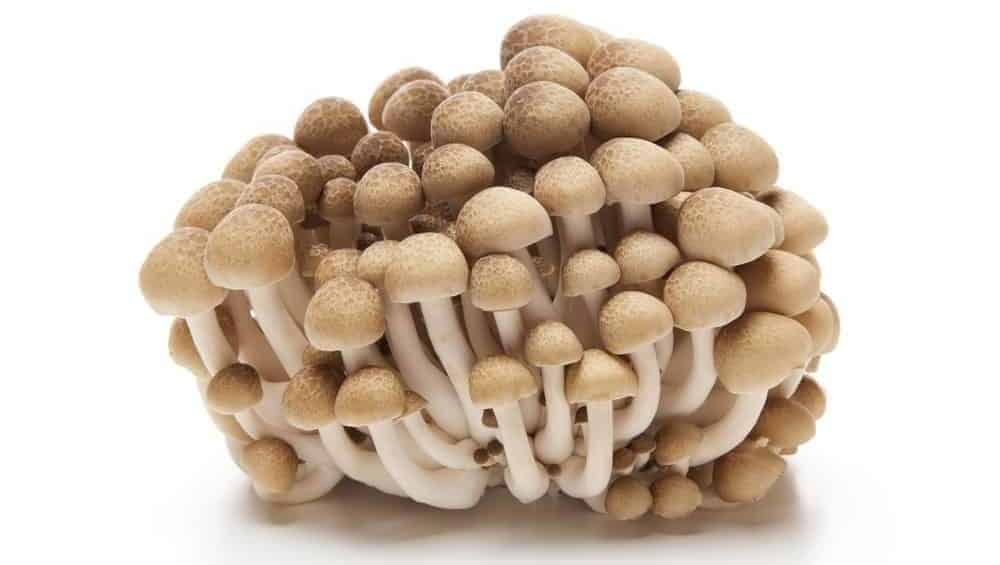 Also called Clamshell mushrooms, these mushrooms have caps that are brown and a crunchy, but sweet and nutty flavor. However, this only applies when they are cooked, which is the best way to eat them. If they are eaten raw, you will notice a bitter taste that you’re not likely to be fond of. 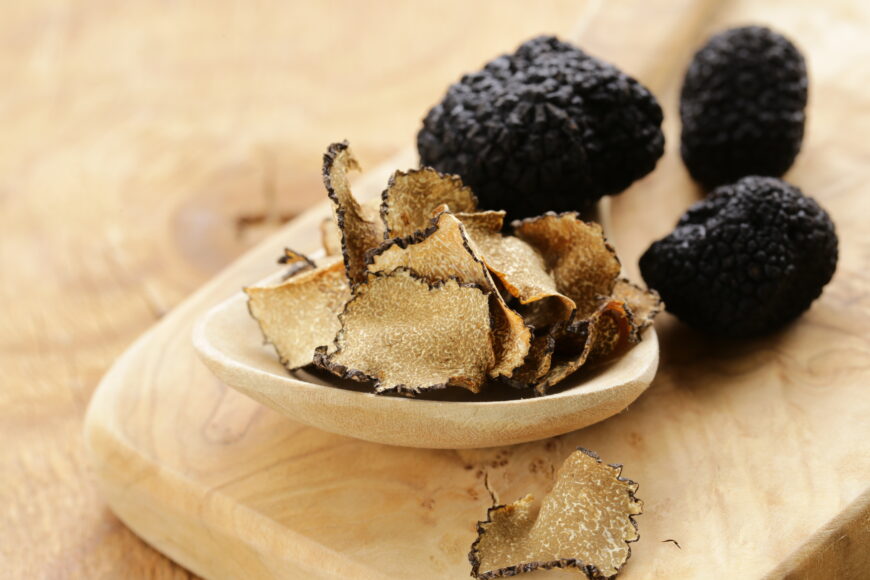 The black truffle is the most expensive (up to $1,500 per pound) of all truffles, and also one of the most famous. These truffles have many different names due to their color.  Black truffles are found in the mountains of Southern Europe. They are a fairly rare occurrence. It is thought that they have been growing there since the Triassic Period, which was over 250 million years ago. 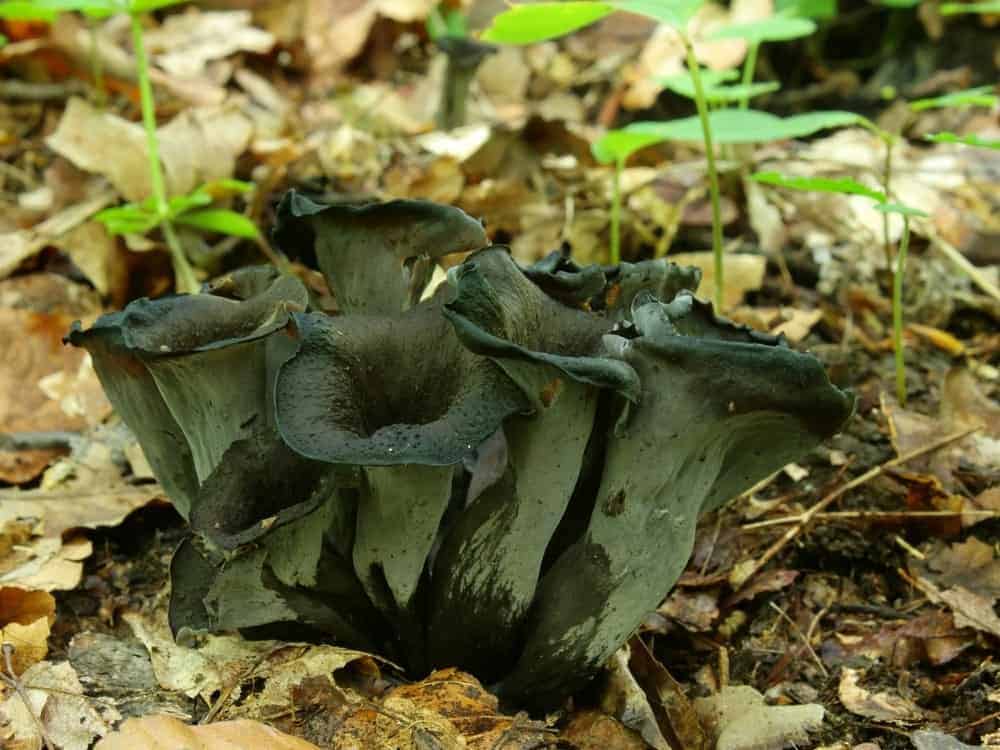 Black Trumpet mushrooms usually bloom in the East and Midwest late in the summer, but it grows all winter long in the West. Also known as the Horn of Plenty mushroom or the Trumpet of the Dead mushroom, they have a smoky, rich flavor and when dried, they are similar to the Black Truffle mushroom. 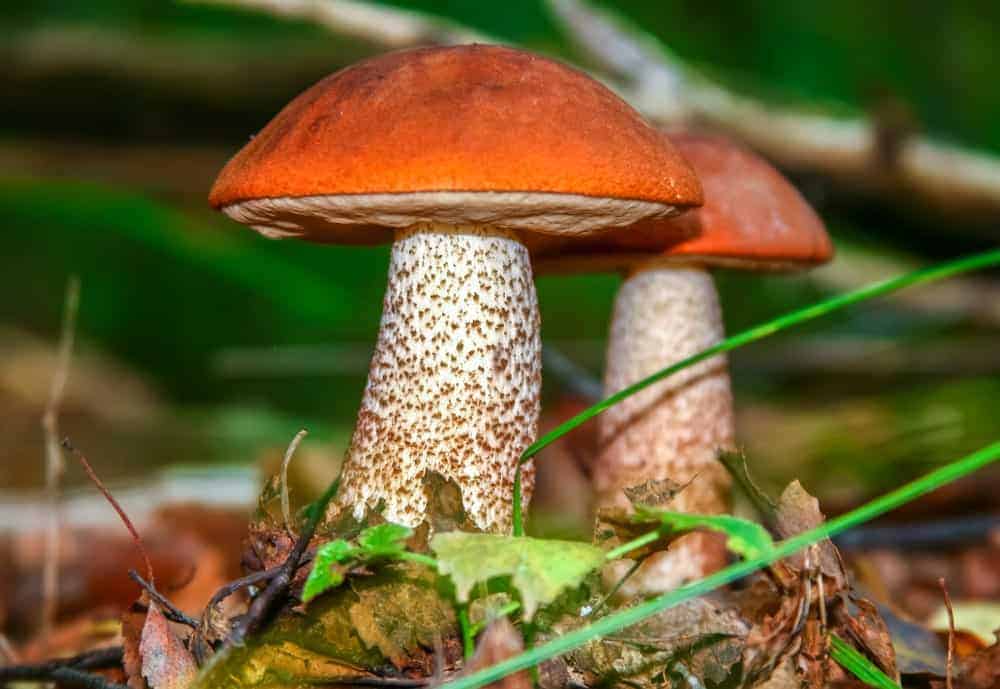 Brown Cap Boletus mushrooms are edible and usually found at the edges of clearings and coniferous trees.

If you go to the supermarket and buy mushrooms, chances are good that you’re buying basic button mushrooms. Also called white mushrooms, they are always harvested when they’re very young, and they have a delicate, but earthy flavor. Moreover, since they are available all year long, they are very easy mushrooms to find. If you’re looking for something to bake or stuff, try the older button mushrooms, which have a mild flavor and a firm texture.

These grow in cool and dark areas. You can grow them at home.  When picking in nature, be careful because these look similar to poisonous mushrooms (i.e. the death cap mushroom). 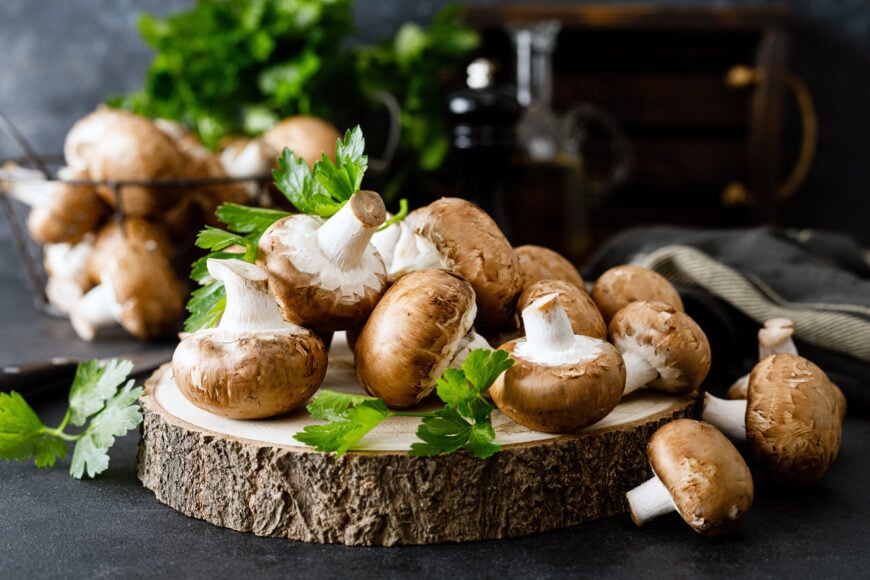 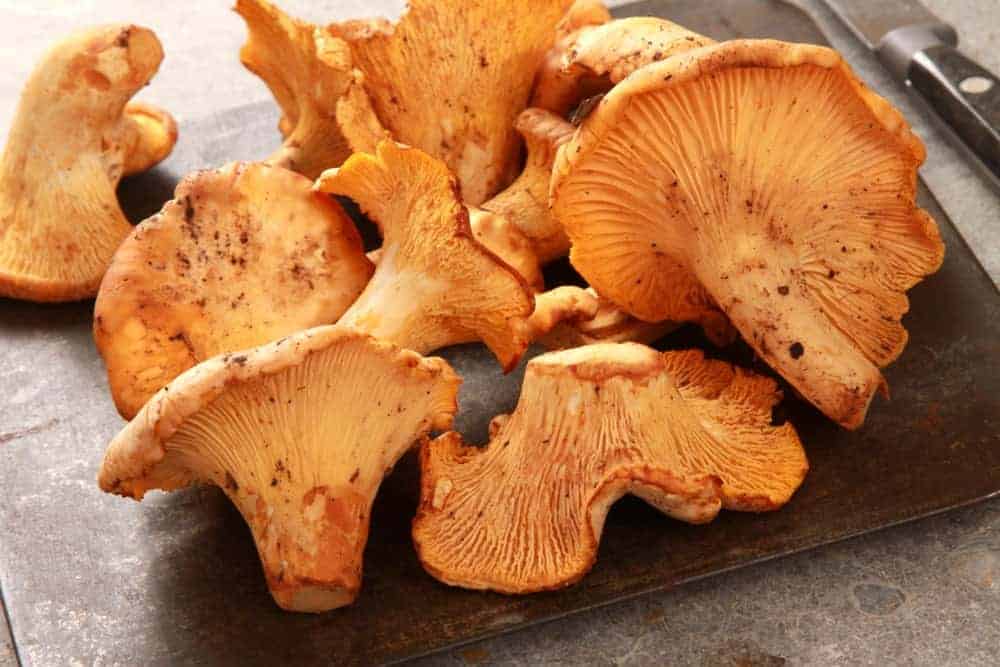 If you cook with Chanterelle mushrooms, you should use them in a dry sauté because they have such a high water content that they will soon be cooking in the water anyway. Chanterelle mushrooms can be almost any color, but they are usually a golden brown. They smell and taste a little fruity and peppery, and they are perfect as a topping for entrees. Compared to many other types of mushrooms, they last a very long time if kept in the refrigerator – up to 10 days. Delicate in texture and flavor, they also go great with eggs.

You can find Chanterelles across Europe and North America. 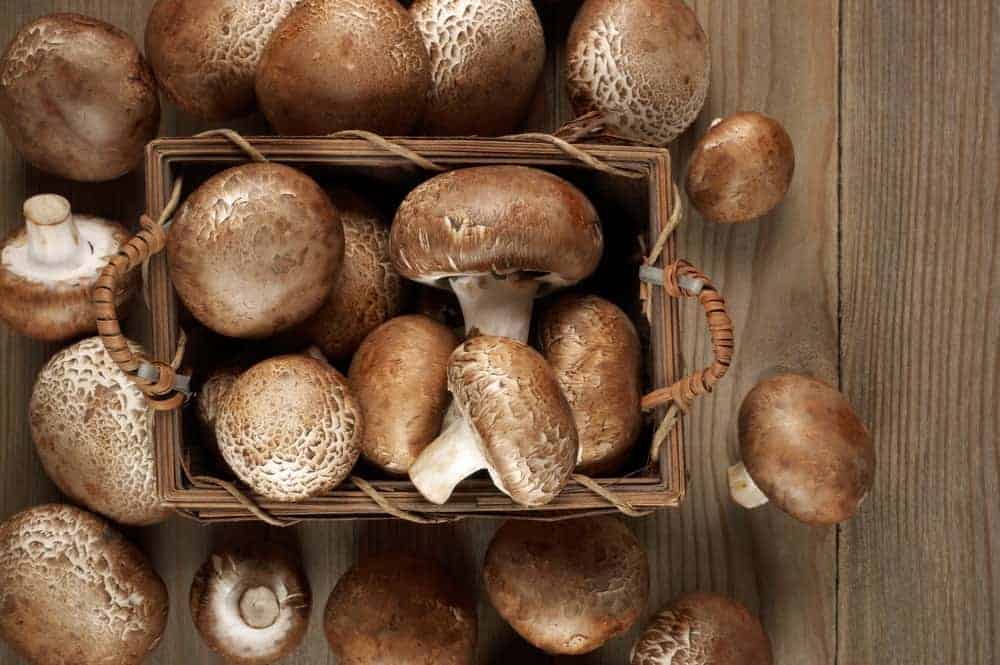 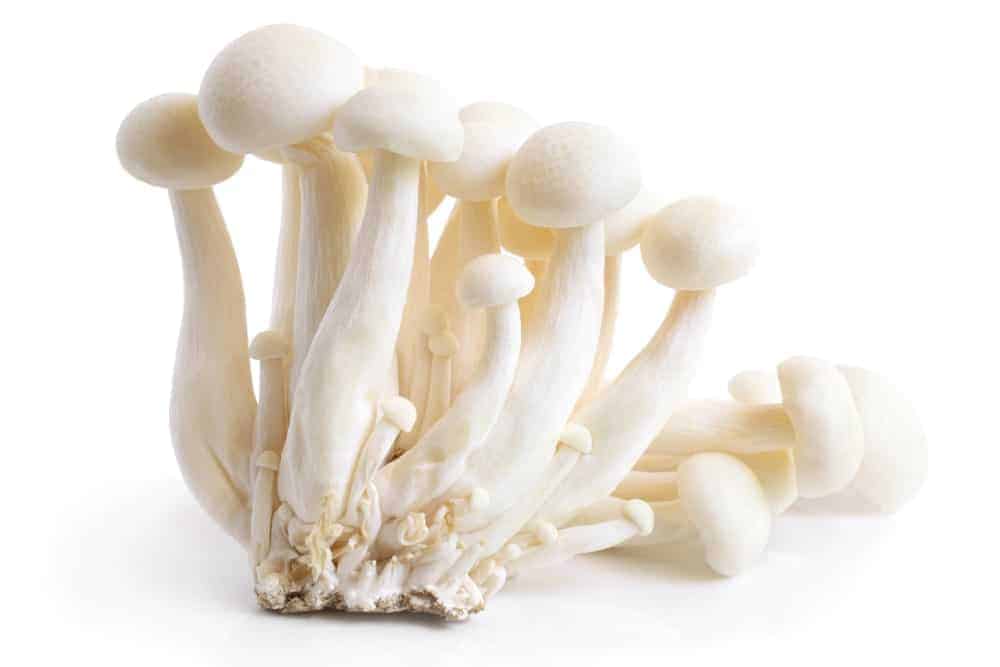 Enoki mushrooms look a little like bean sprouts with their small caps, white color, and long stems. Popular in Asian dishes, you can buy these mushrooms either canned or fresh, and there is a lot of flavor to them. They are a crispy type of mushroom, so they go great in many salads and soups. Native to Japan, once you try Enoki mushrooms you are guaranteed to come back for more.

These grow on the stumps of Chinees hackberry trees as well as stumps of ash, mulberry and persimmon trees [source: Wikipedia]. 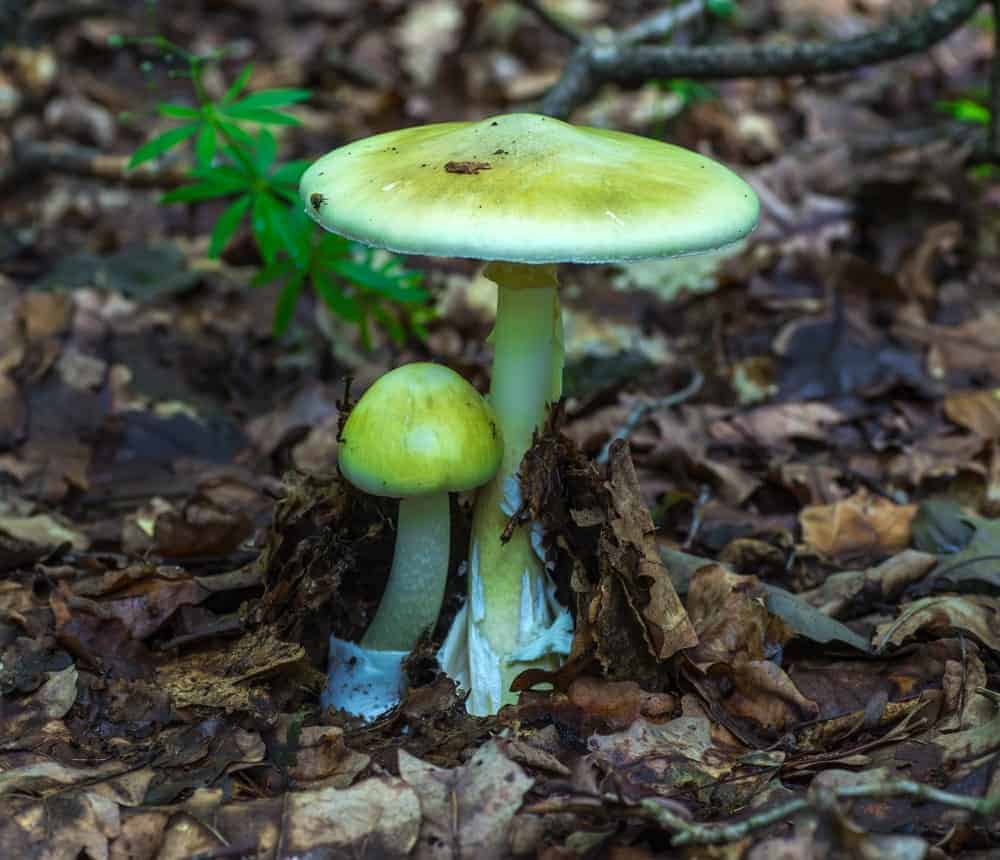 Also known as the Deathcap Mushroom, contain poison throughout the cap, gills, stem, and spores. 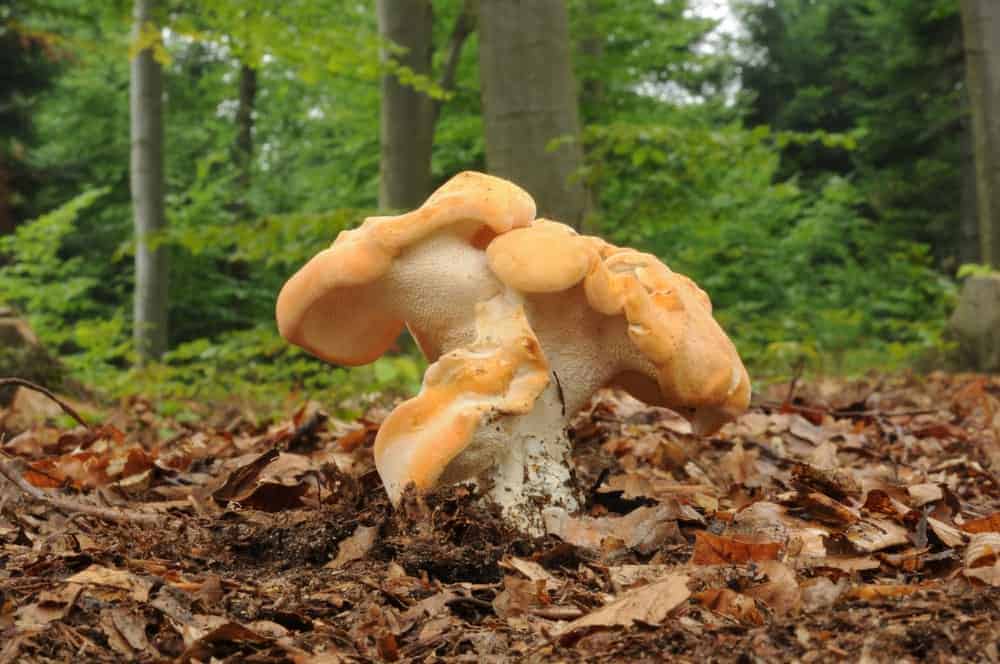 Also known as the Sweet Tooth mushroom, this mushroom smells and tastes sweet, unless it is an older mushroom, in which case it may taste a little bitter. The Hedgehog mushroom tastes a lot like the Chanterelle mushroom and grows hardily in the winter months on the West Coast. It also has a meaty, nutty, and crunchy taste.

13. Hen of the Woods Mushrooms 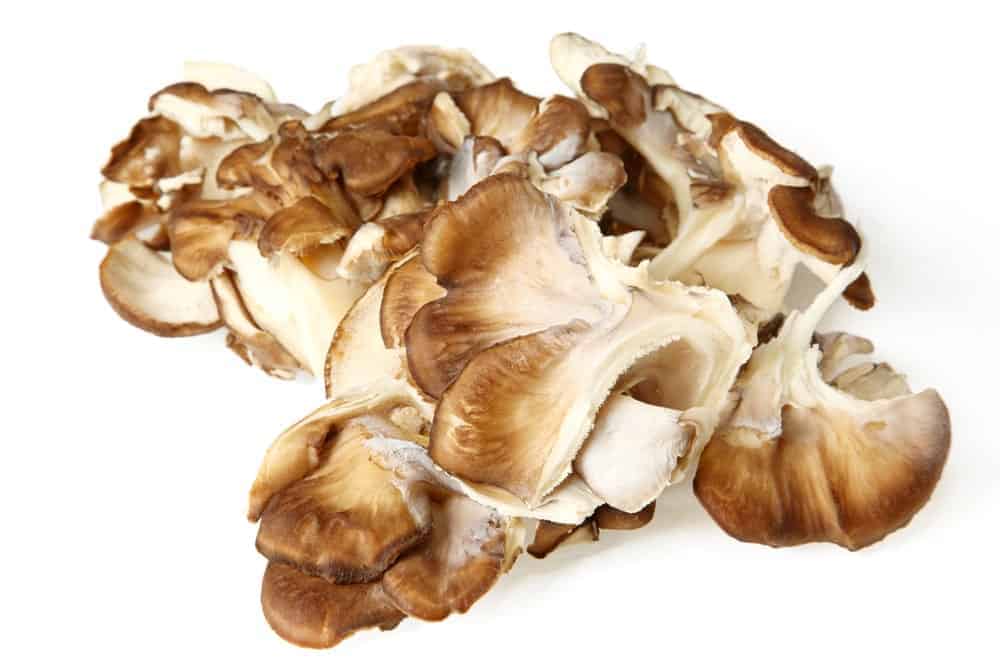 In Japan, these mushrooms are also called maitake mushrooms, and they have a lot of flavors packed into them. Found growing at the base of oak trees, Hen of the Woods mushrooms are used in both Japanese and Western dishes, and they are rich, earthy, and look similar to a flower. Perfect for stir-fry dishes and many types of soup, the mushrooms hold their shape well when cooked, making them a very attractive addition to many of your dishes. 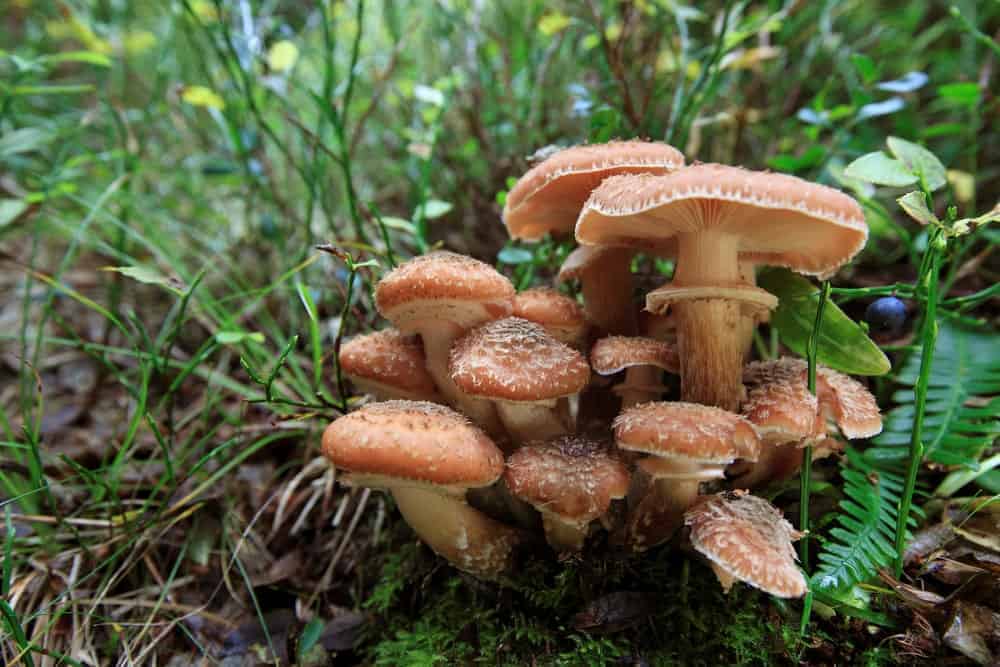 The Honey Agaric mushroom is the world’s largest living stretching up to 10 sq. km. underground and weighing around as much as a blue whale. Only the tip or a small percentage of the mushroom can be seen above ground. 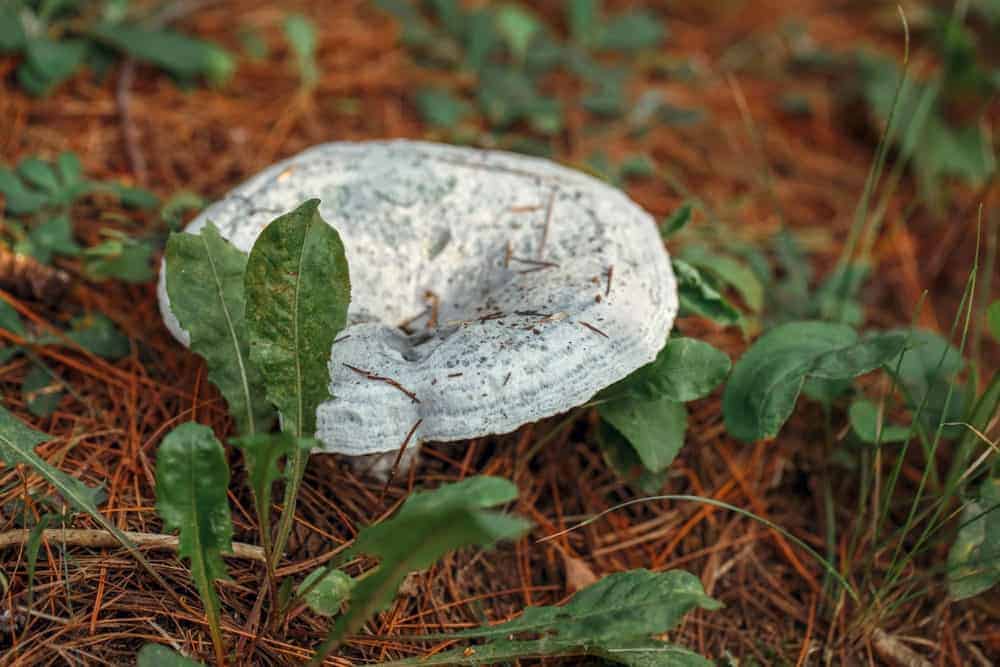 It’s a blue mushroom that’s not particularly common but can be widespread in the woods. It produces dark blue milk when cut. 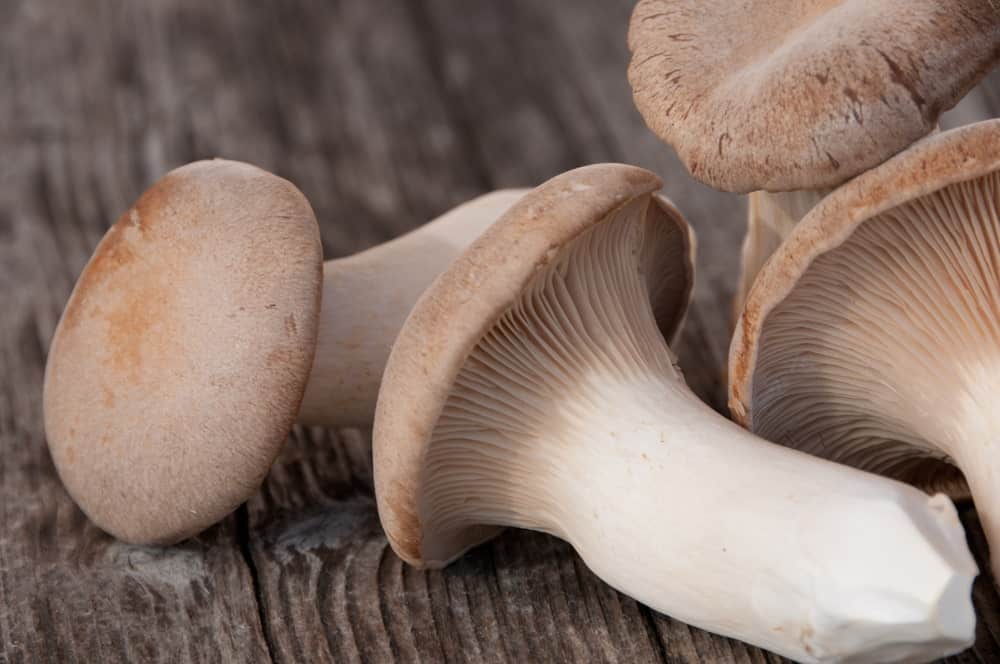 Sometimes called the King Brown mushroom or the French Horn mushroom, these are very thick and meaty mushrooms, and they are also quite large in size. 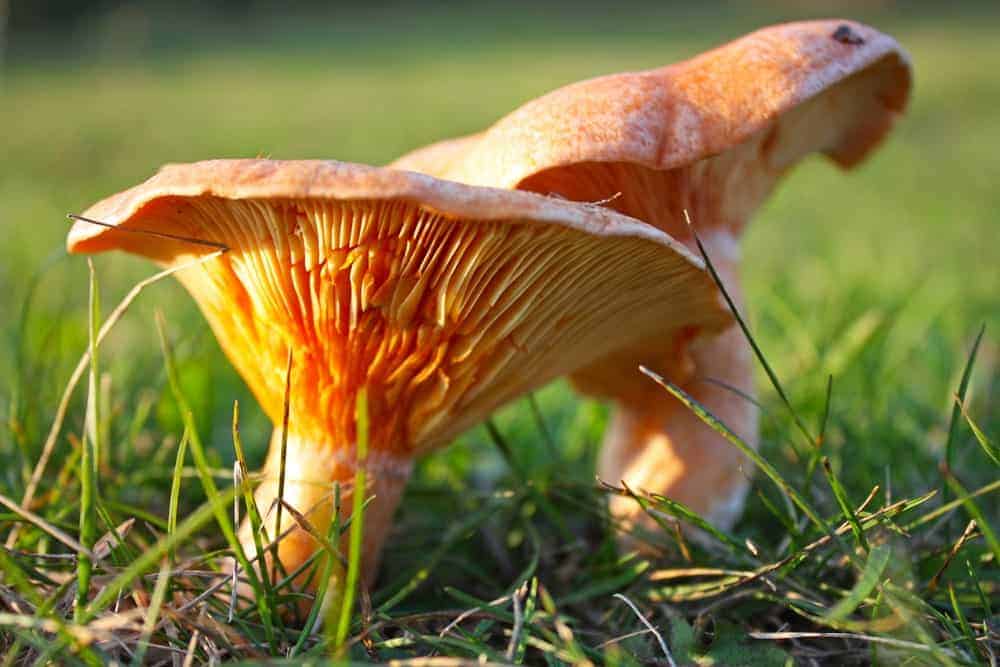 Milk mushrooms are the only mushroom species that are native and cultivated in India. They are medium to large in size, edible, and excellent sources of vitamins B2, E, and A, phosphorus, potassium, and selenium, and also contain calcium, vitamin C, iron, and zinc. 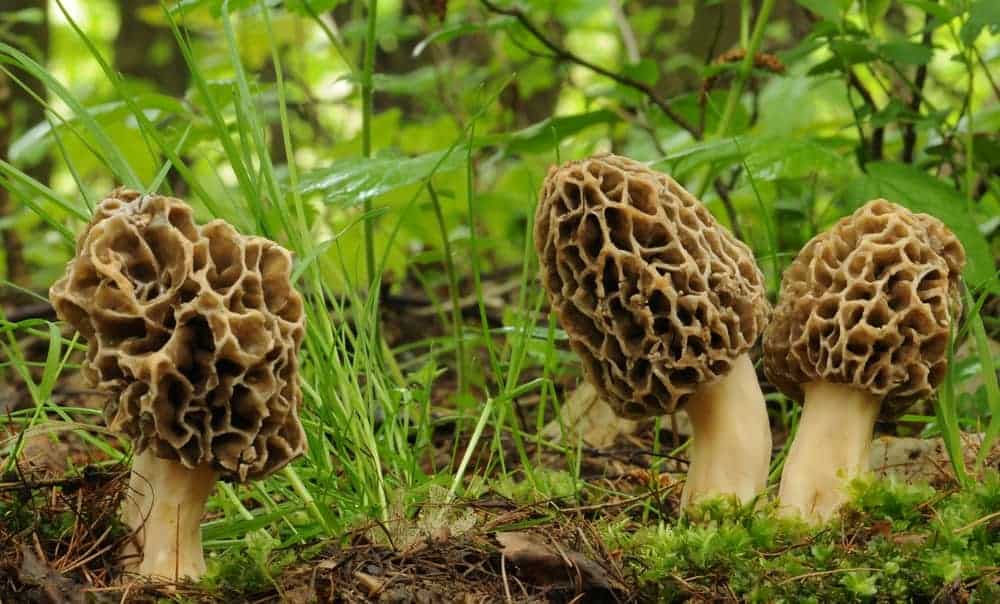 Morel mushrooms are rather unattractive, but they are delicious mushrooms that come alive with flavor when you eat them. They are rather chewy and look similar to a honeycomb. They are also quite savory and are especially delicious when you sauté them in butter. Morel mushrooms can be very expensive, and once you try them you’ll understand why.

These mushrooms can be found on the edges of wooded areas in many states of the US (often growing around the base of dead or dying trees). 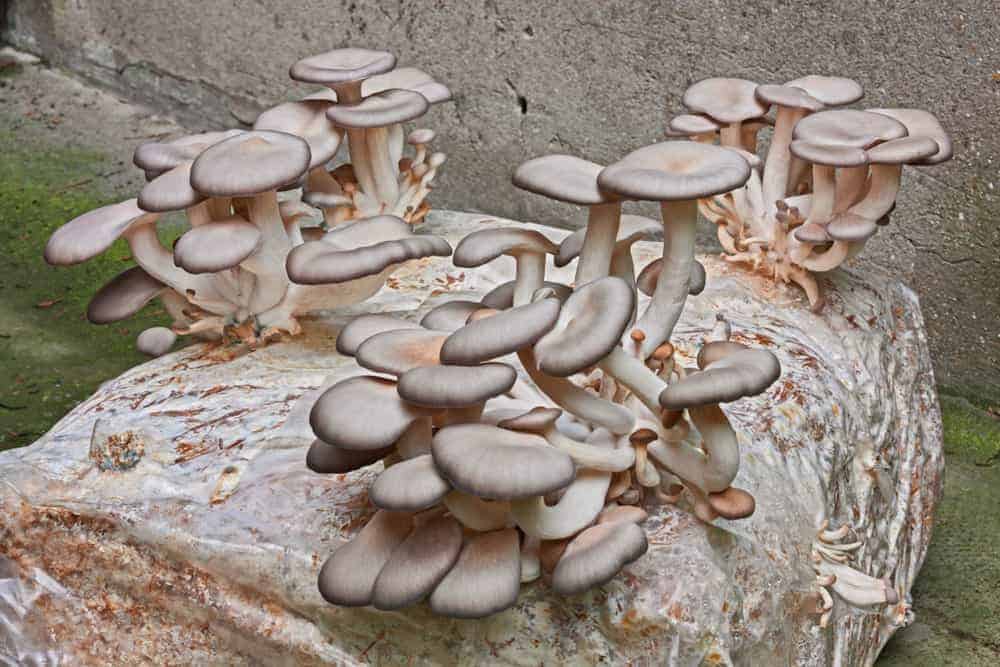 Oyster mushrooms look dissimilar to most other types of mushrooms, but there is no need to be intimidated by them. They have a delicate, sweet flavor and are very affordable as well. The reason they are called Oyster mushrooms is that of their appearance, and they have an almost anise-like taste at certain times of the year.

Simple to cook with, the Oyster mushroom can be used in a variety of dishes. They also come in colors such as grey, brown, and even a reddish color, and the younger they are, the more flavorful they are. 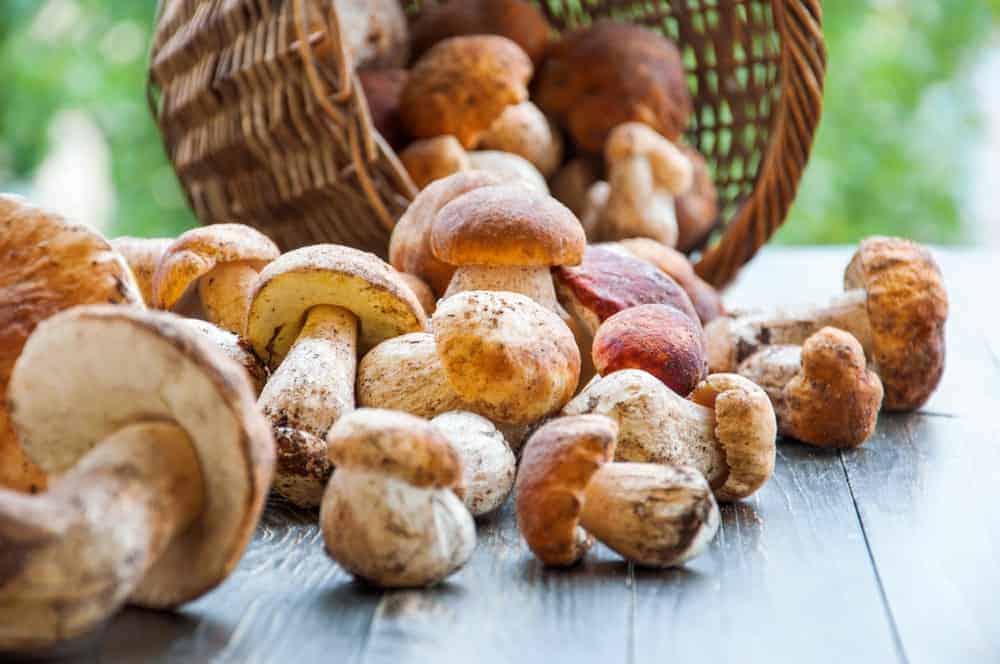 Porcini mushrooms are very meaty and flavorful, and they are often found in numerous Italian dishes. Much like sourdough, Porcini mushrooms have a flavor and taste that is creamy and nutty, and they are light brown in color. They are also sold either canned, dried, or fresh, but the dried mushrooms need to be soaked in hot water for at least 15 minutes before you cook them. In addition, Porcini mushrooms can get up to 10 inches across, so they get quite large at times. 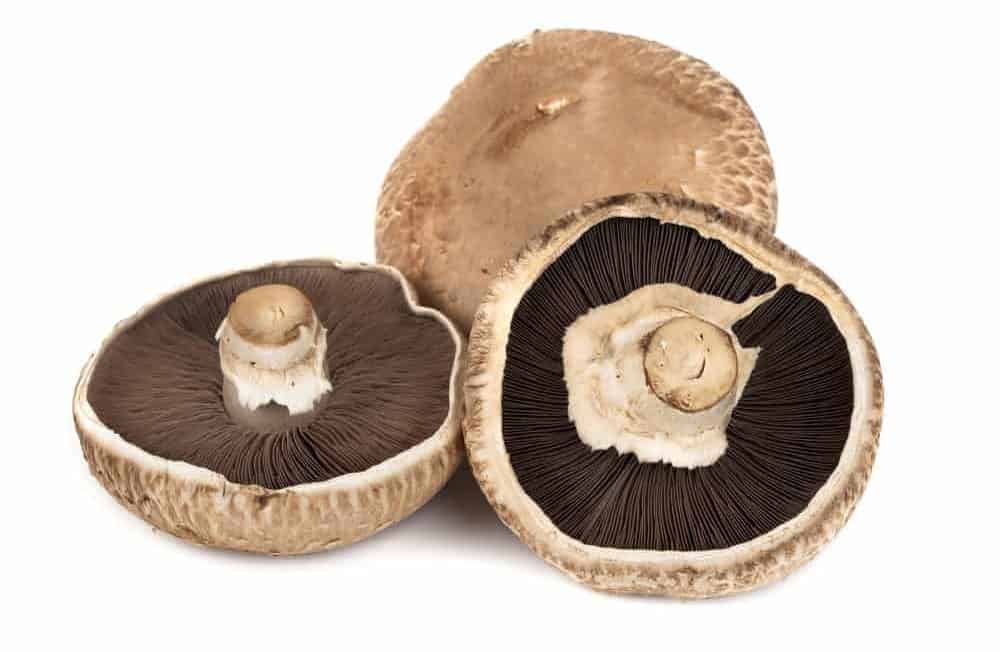 When white button mushrooms fully mature, their caps grow outwards and they are called Portobello mushrooms. With its mild flavor and somewhat meaty texture, you can even use these types of mushrooms as a substitute for meat in many dishes. Some people consider them one of the tastiest mushrooms in existence, and they are especially yummy when you grill them.

Portobellos grow in grasslands in Europe and North America. 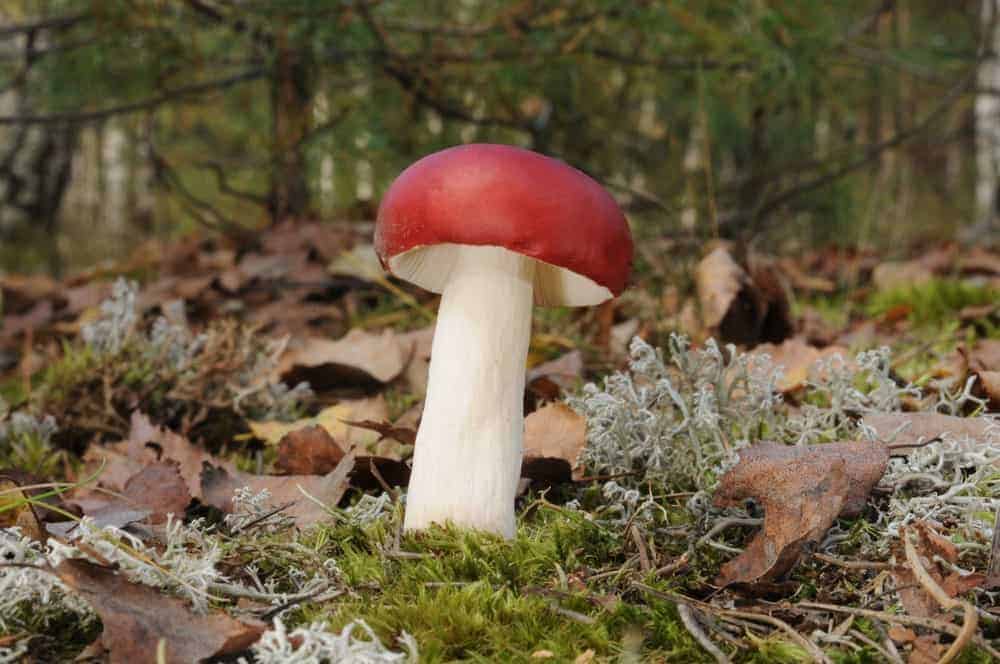 Russula emetica, also known as The Sickener, is poisonous when eaten raw or poorly cooked and can cause nausea and vomiting. These are followed by severe stomach pains and diarrhea. 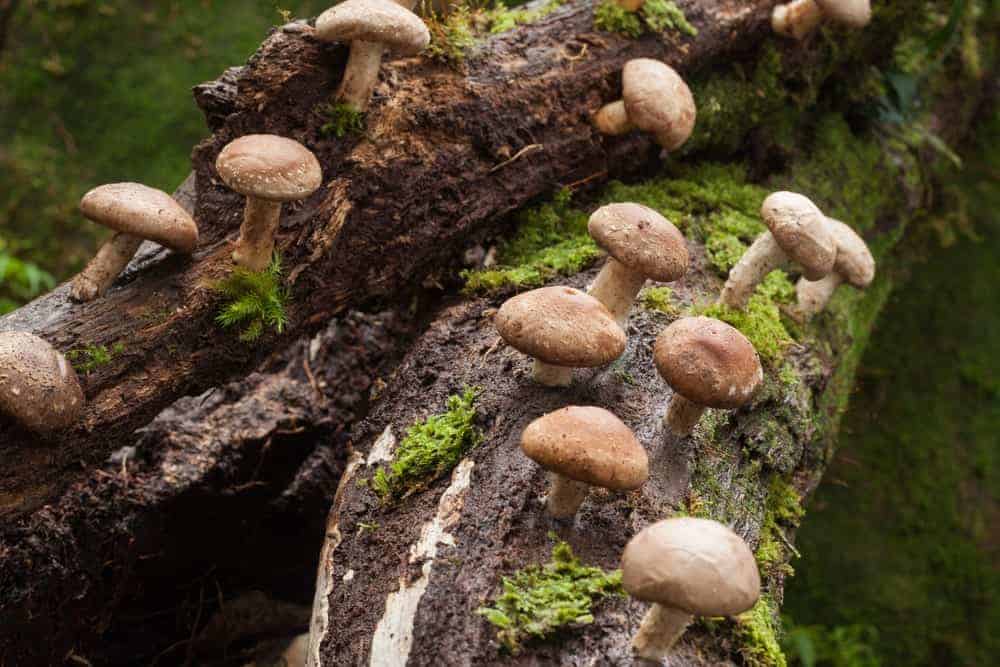 Growing mostly in areas such as Korea, China, and Japan, these mushrooms are naturally very commonly found in a variety of Asian dishes. Like Portobello mushrooms, Shiitake mushrooms are chewy and meaty, and they are frequently included to enhance various sauces and soups. They have a lot of flavor to them, and they can often be found in powder form, which you can look for if you can’t find them fresh. 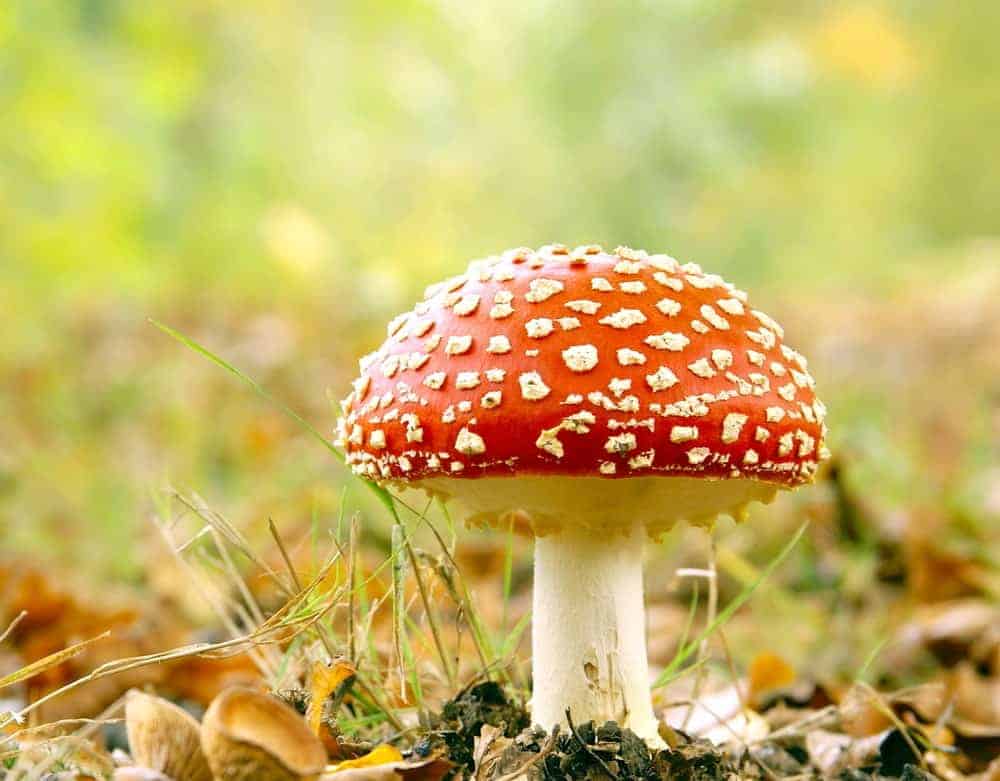 So-called because they look like the spot where toads would sit, Toadstools are fungi widely believed to be inedible or toxic.

In addition to using mushrooms as food and ingredients in thousands of different recipes, there are mushrooms used mostly for medicinal purposes.

That’s a wrap on our extensive list of the many different kinds of mushrooms.