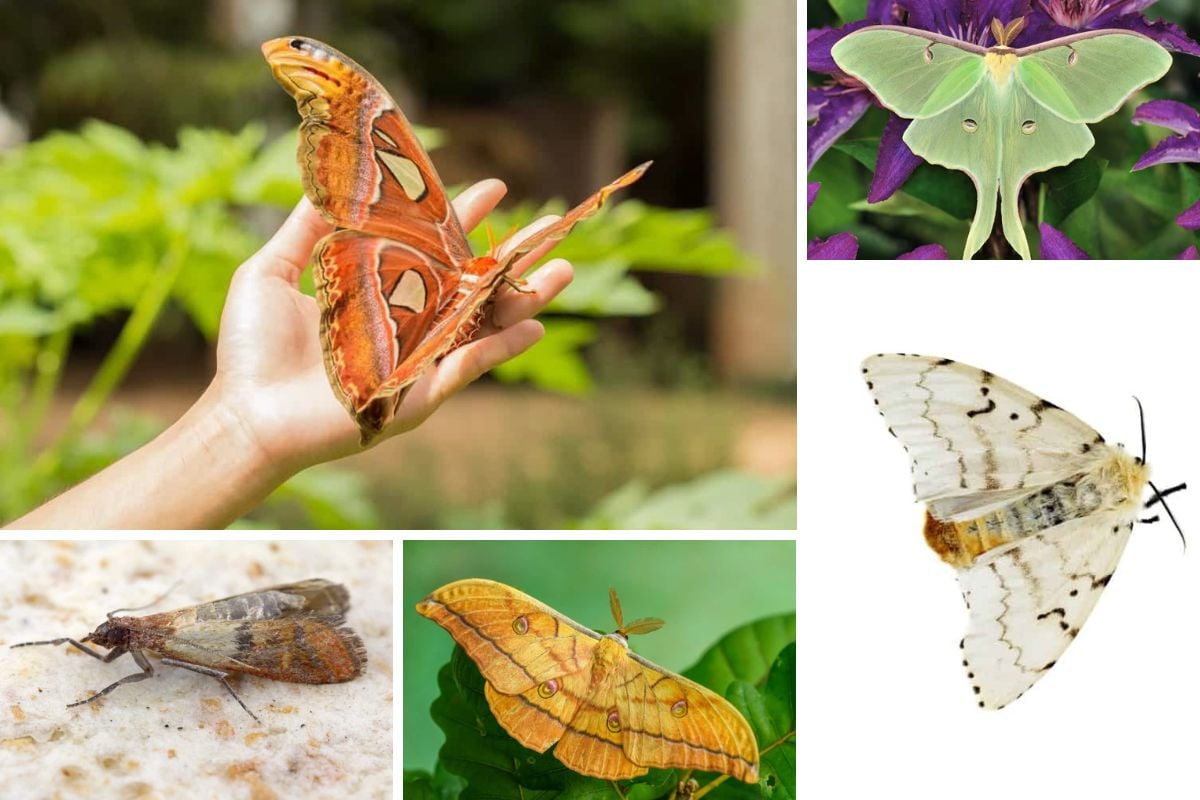 The word “moth” is likely to draw a very hideous image in your mind and you probably might end up picturing drab brown, terrifying insects. However, what you don’t know is that these flying insects have a lot more to them than what normally meets the eye.

There is a great number of moth species found all over the world, and Britain alone is home to some 2,500 beautiful and amazing species. They all greatly vary in size, color, habits, and characteristics.

What’s important to know here is that they offer a plethora of key ecological benefits. Moths play an integral role in the wildlife ecosystem. They are a vital food source for many other animals and they often also help pollinate flowers. They also help us human beings by letting us know about the health of our environment.

Although moths are seen all across the globe, and their species are found in great abundance, here are some of the most stunning and popular moths from all around the world.

Anatomy of a Moth 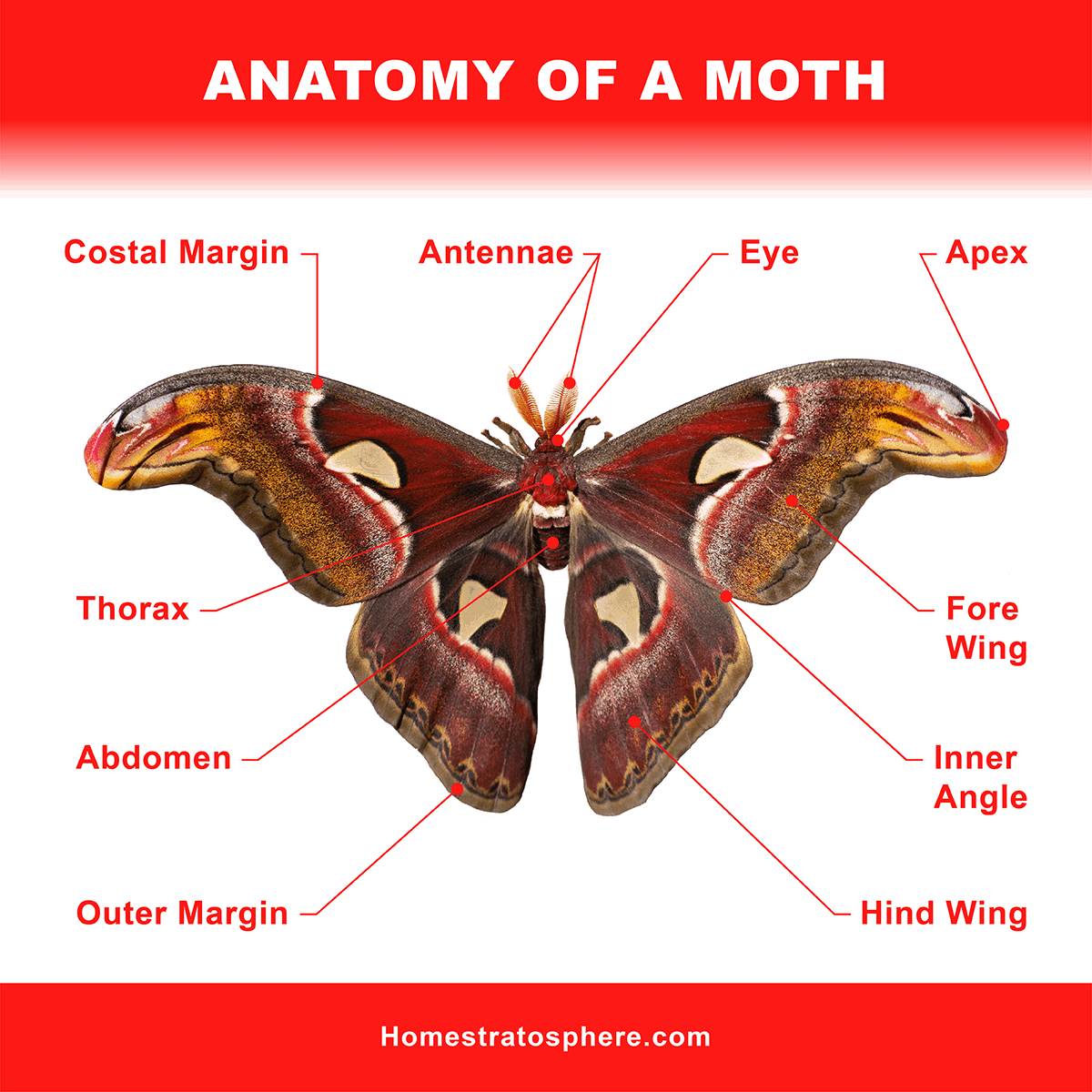 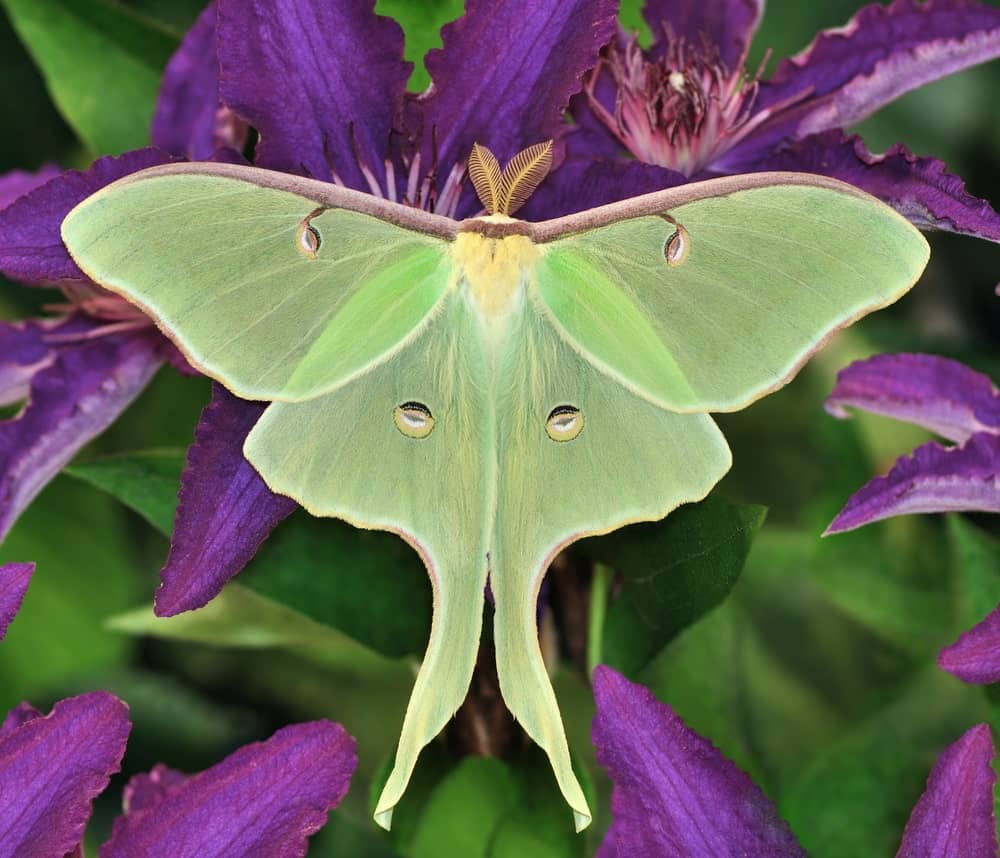 This is a type of moth with lime-green colored wings and a white body, and is also often referred to as the American Moon Moth. It belongs to the Saturniidae family, also known as saturniids. Luna moth can be found in eastern Texas, central Florida, eastern North Dakota, and Nova Scotia, west to Saskatchewan. It is one of the largest moths in North America. These moths have a wingspan which is typically 114 mm, but can extend to 178 mm as well.

The hind wings of Luna moth have long curving tails and each of its wings consists of eyespots that have arcs of red, yellow, black, green, or blue. These eyespots are meant to confuse possible predators. 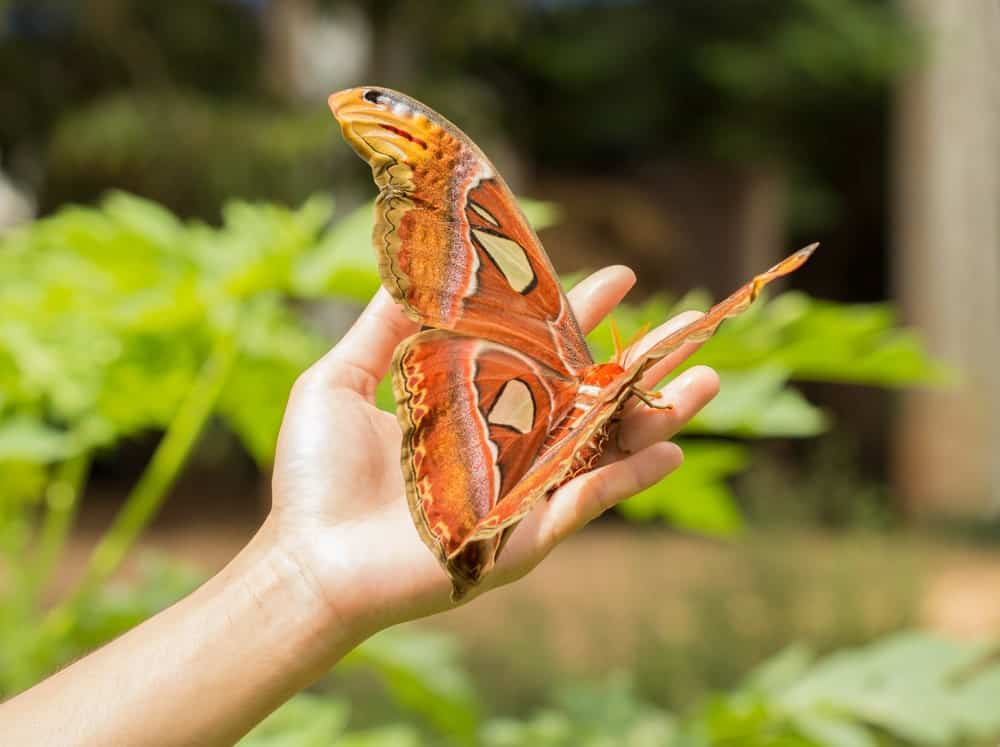 This is an incredibly large saturniid moth that is widely prevalent in the forests of Asia. It is one of the world’s largest moths based on wing surface area. The wing size of an atlas moth measures between 9.8 and 11.8 inches, with the surface area extending to almost 400 square cm.

Since it’s so large, the Atlas Moth also weighs a lot more than most other moths. Female atlas moths weigh around 28 grams, while males are 25 grams. These are moths are highly distinguishable because of their multicolored wings, however, one feature that clearly sets them apart from other moth species is that they don’t have a mouth.

Their wings are a combination of reddish brown and copper, often with pink, purple, and white lines. 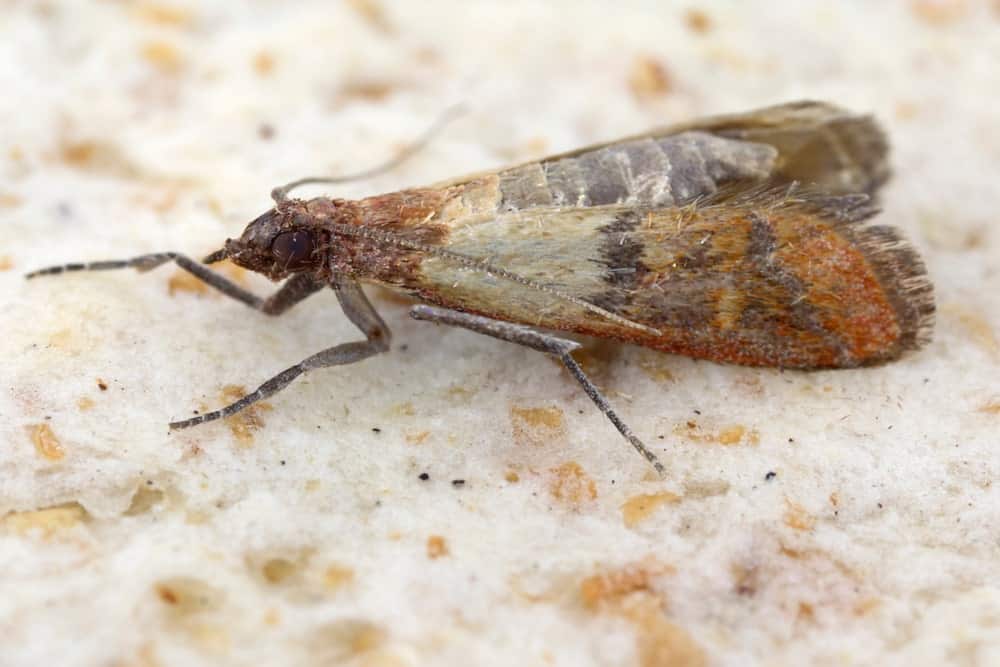 This moth gets its name from the United States where it was discovered to be a meal pest that largely feeds on maize, or better known as “Indian Corn.” It is a pyraloid moth that belongs to the Pyralidae family.

The Indianmeal moth is also known by various other names including grain moth, weevil moth, flour moth, and pantry moth. It is one of those moths that have been found in every continent except Antarctica. It is found in great abundance particularly in Florida, United States where it thrives in tropical habitats.

Adult Indian meal moths are about 8-10 mm in length and have a wingspan of 16-20 mm. Their forewings are usually reddish brown in color, but can also sport shades of dark gray and bronze. 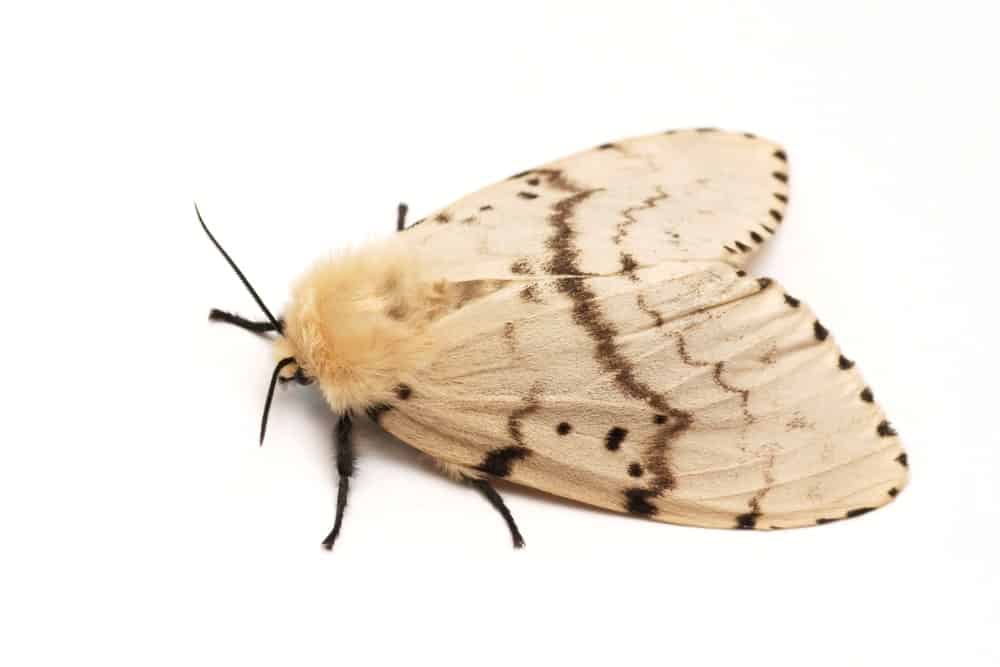 The European gypsy moth is found in various areas including North Africa, Europe and western Asia. One of their key identifying characteristics is that their winged females are flightless.

The Asian gypsy moth, on the other hand, is found in eastern Asia and western North America. Its key feature is the flying females which are attracted to lights.

Lastly, the Japanese gypsy moth is found in the whole of Japan. The males of this species are fairly large and sport a very dark brown color. 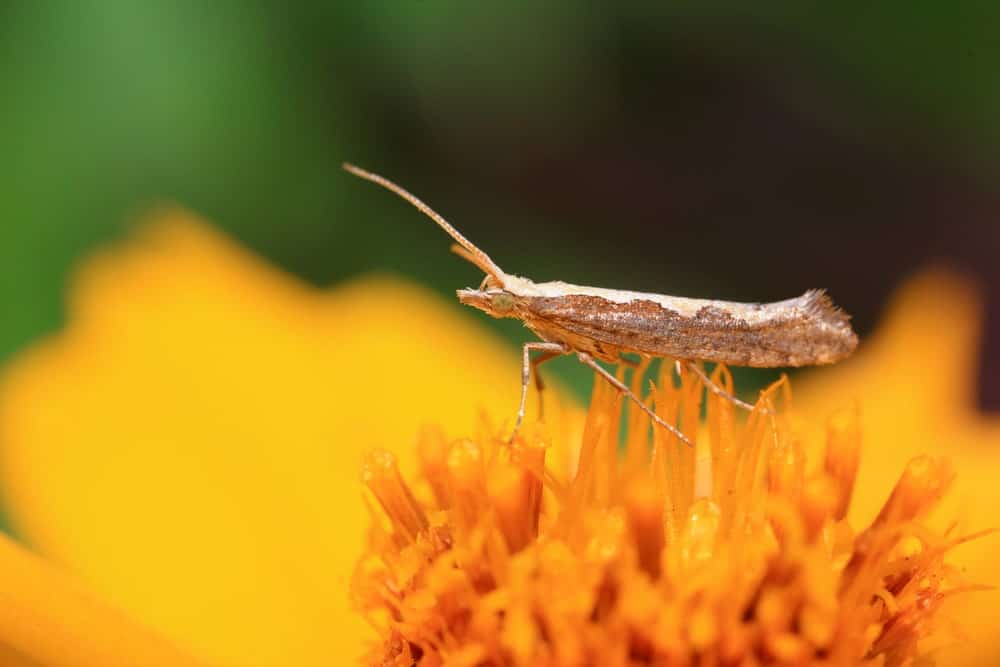 This variety of moth is also known as ‘cabbage moth’ and is believed to have originated from Europe. They are now also found in great abundance in Europe, New Zealand, the Americas, Australia, and Southeast Asia.

These moths are considered to be pests that feed on cruciferous crops. They are small in size, and are typically grayish brown in color, but can often sport a diamond-shaped cream colored band, hence the name Diamondback moth.

The wingspan of diamondback moths is about 15 mm and the length of their body is almost 6 mm. They were initially killed with the help of pesticides, but over time, they have developed quite a resistance to the chemicals. This has resulted in new chemical and biological controls to kill these moths in other to prevent them from causing further damage. 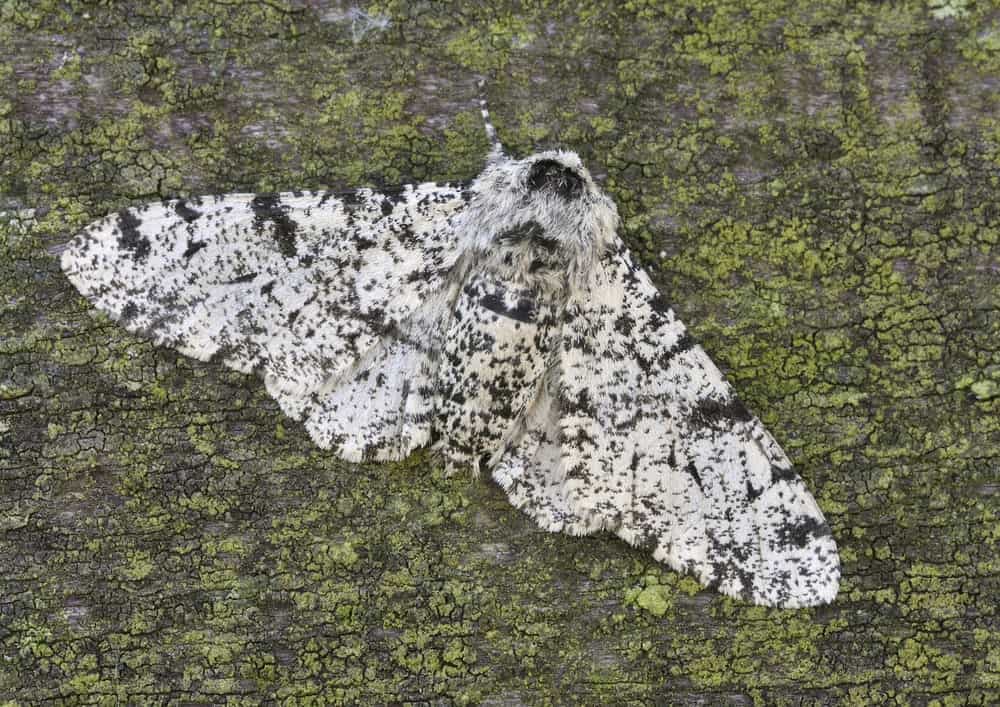 This is a night-flying moth and is most widespread in Ireland and Britain. It is also referred to as “Darwin’s moth” because it is one of the best examples of population genetics and natural selection, one of Darwin’s incredible theories.

Peppered moths get this unique name from the fact that they have white bodies with white speckles across their wings. They are often found resting on lichen-covered tree trunks and this black-white pattern helps camouflage them against the trees.

The wingspan of these moths is almost 55 mm. They have a stout body with very narrow and elongated forewings. Peppered moths are also commonly found in regions of China, Nepal, South Korea, Japan, Russia, and Europe, to name a few. 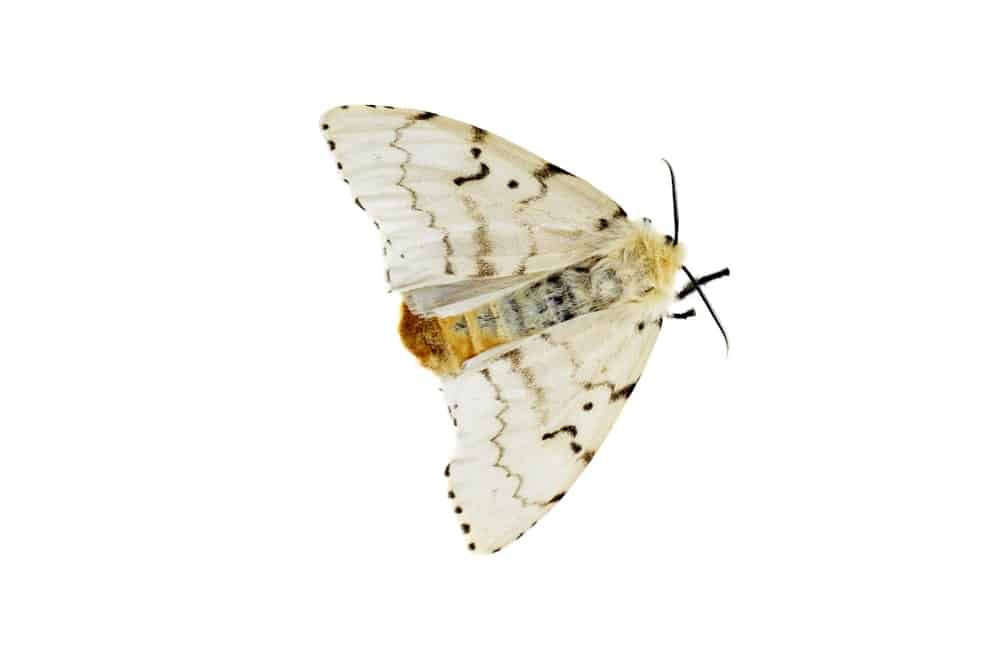 This is an aesthetic pest that is found in a number of ornamental trees as well as different agricultural crops. They are native to North America and now can also be found in Asia and Europe.

The wingspan of adult fall webworm moths is approximately 30 mm, and they are often white in color, with dark-colored marks on their bodies. These moths are often confused with eastern tent caterpillars; however, unlike the latter, these moths feed within their tents with foliage present at the end of the branches.

They typically feed on numerous tree and shrub species, but some of their highly preferred host plants include sweet gum, oak, pecan, willow, and mulberry. They are usually found living in areas where their favorite host trees are present, as well as in a variety of different landscapes and forests. 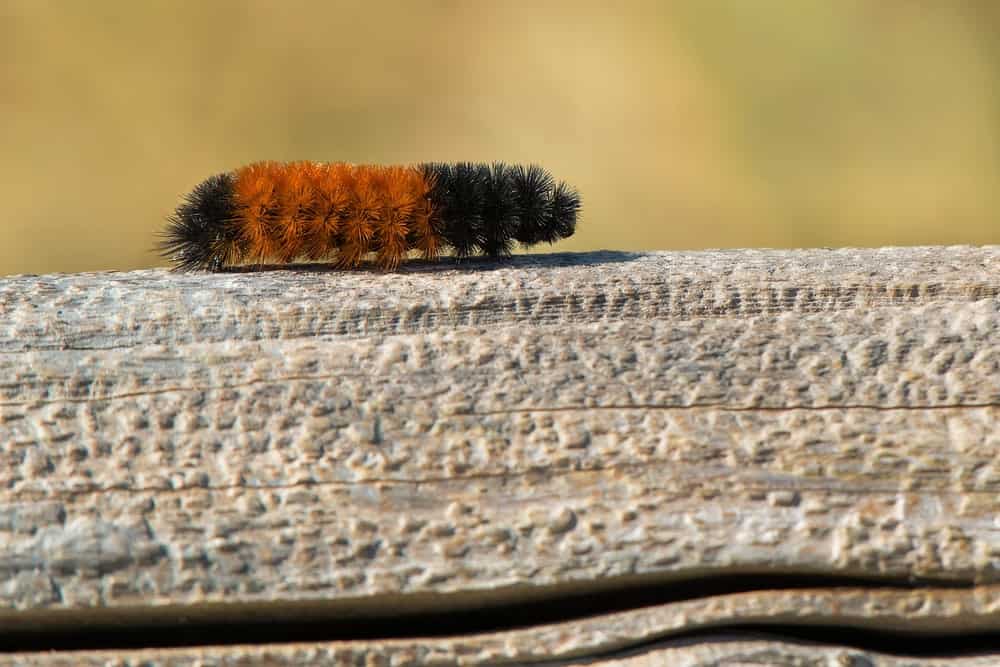 This type of moth is also known as woolly worm, woolly bear, and banded woolly bear. They are mostly found in southern Canada and the United States.

The Isabella tiger moth is known for its 13-segment larvae that are often covered with brown hair down in the middle. The anterior, however consists of black hair. The adult moths of this species sport a dull yellowish color with robust and scaly thorices.

They are also found in numerous cold regions including the Arctic. The wingspan of these moths ranges from 4.5-6.5 cm and the wings are orange-yellowish in color with pointed and marked forewings.

The species of these moths is referred to as a “generalist feeder” which means that they consume almost all types of plant species including many herbs and trees. 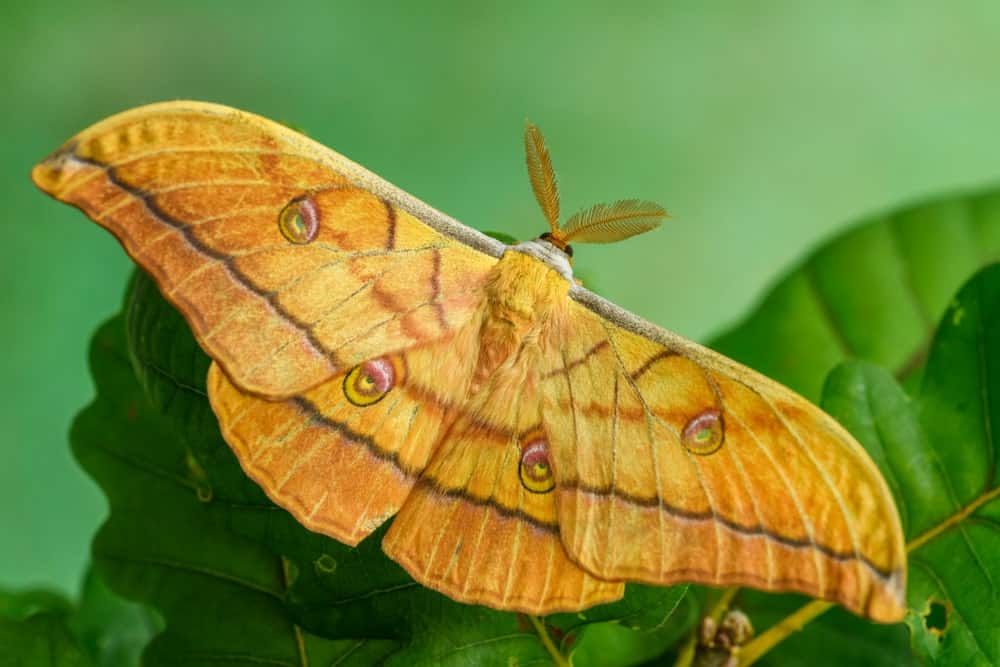 Also known as Japanese oak moth, this moth variety is endemic to East Asia, but can also be found in Europe to where they have been imported over time for tussar silk production. Other regions include northeastern Italy, the Balkans, regions of Austria and southeastern Europe.

The Japanese silk moth has been cultivated in Japan for a long time, mainly for its super elastic and strong white silk which is extremely rare and expensive in today’s times. They are found in great many colors including bronze, chocolate brown, brownish grey, chromium yellow, and khaki.

The wingspan of these moths ranges from 110 – 150 millimeters and they are often marked and colored. One of their key distinguishing features is an elongated solid black spot present on their hind wing eye spot. 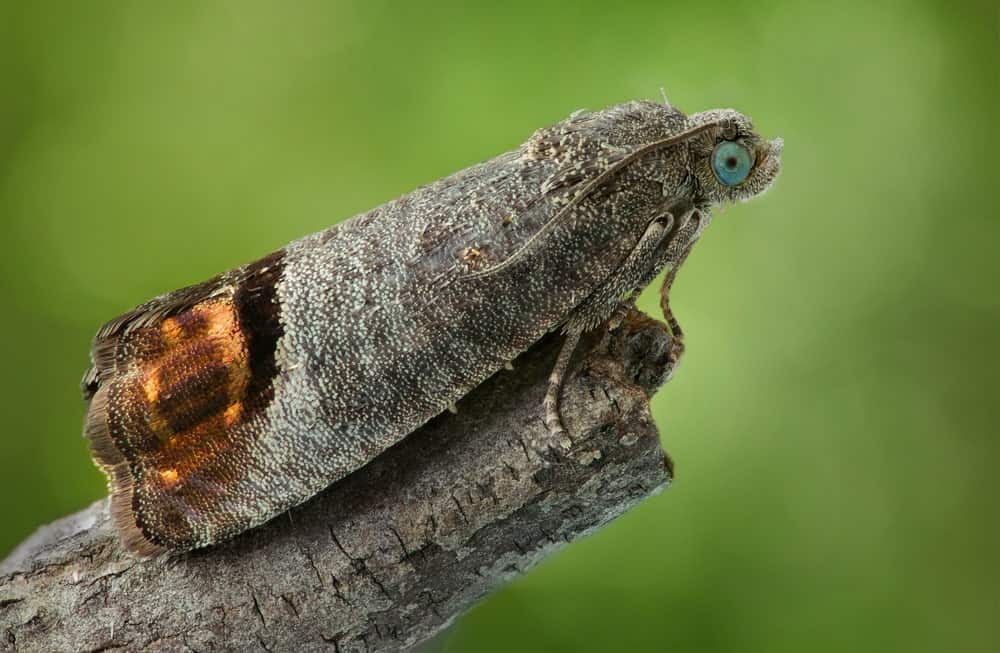 These moths are popularly known as major pests to agricultural crops, specifically fruits including pears and apples. They are great destructive pests that were first introduced to Europe by the settlers.

An interesting fact about the codling moths is that their larvae are unable to feed on leaves, which is the primary reason why their species are highly dependent on fruits. They attack fruits and prevent them from growing, which is what leads to premature ripening of the fruits.

After being introduced to Europe, the codling moths became widespread in a number of other regions including islands in the Pacific, Asia, Australia, Africa, and South and North America. They are not very large in size and they normally grow up to an average length of 10 mm while their wingspan is almost 20 mm. 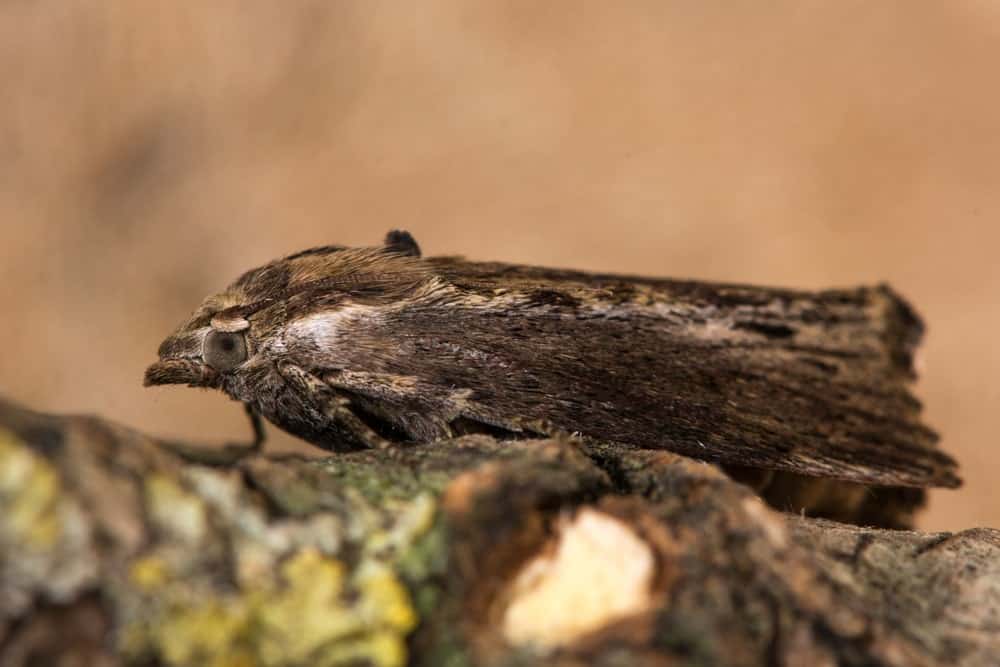 This moth is also known as honeycomb moth and it belongs to the Pyralidae family, same as the Indianmeal moth. It is distributed all across the world and is literally found everywhere. It gets its other common name, that is, honeycomb moth due to the fact that it does parasitization of honeybees and hives. This is a process that involves one organism living in or on another organism.

The greater wax moths were first identified as pests in Asia, after which their population spread all over New Zealand, some parts of Europe, northern America, and Great Britain. Although this species is distributed across the globe, they have reported in great abundance in ten European countries, twenty seven African countries, five island countries, nine Asian counties and three Latin American countries.

Since they cost such massive economic losses especially in areas where beekeeping is practiced, the need for severe control methods and chemical fugants have been on a great rise. 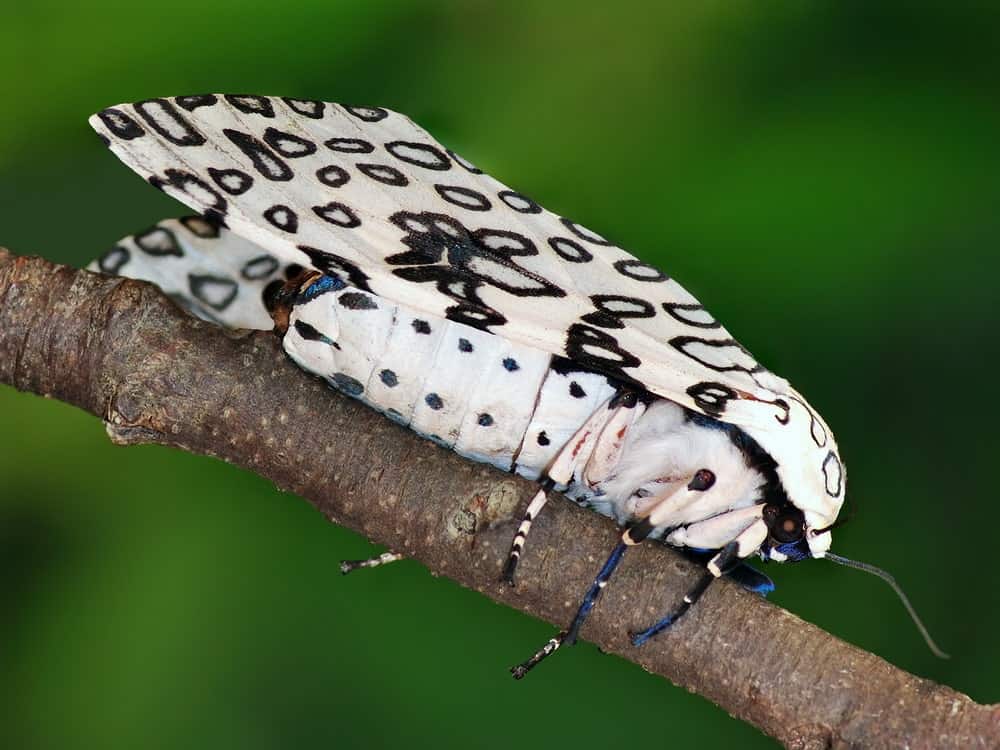 Also known as eyed tiger moth, the giant leopard moth belongs to the Erebidae family. This species is widely found throughout North America to Southern Ontario and further in Panama, Mexico, and Eastern United States.

The wingspan of these moths goes up to 76 mm and they sport a bright white color with a combination of hollow and solid neat, black blotches. The abdomen is colored dark blue with orange markings and the legs are black in color with white bands.

The adult male giant leopard moths grow to an average length of 51 mm while their female counterparts grow up to 30 mm. An interesting about this moth species is that their mating sessions are exceptionally long and can last for 24 hours or even more. 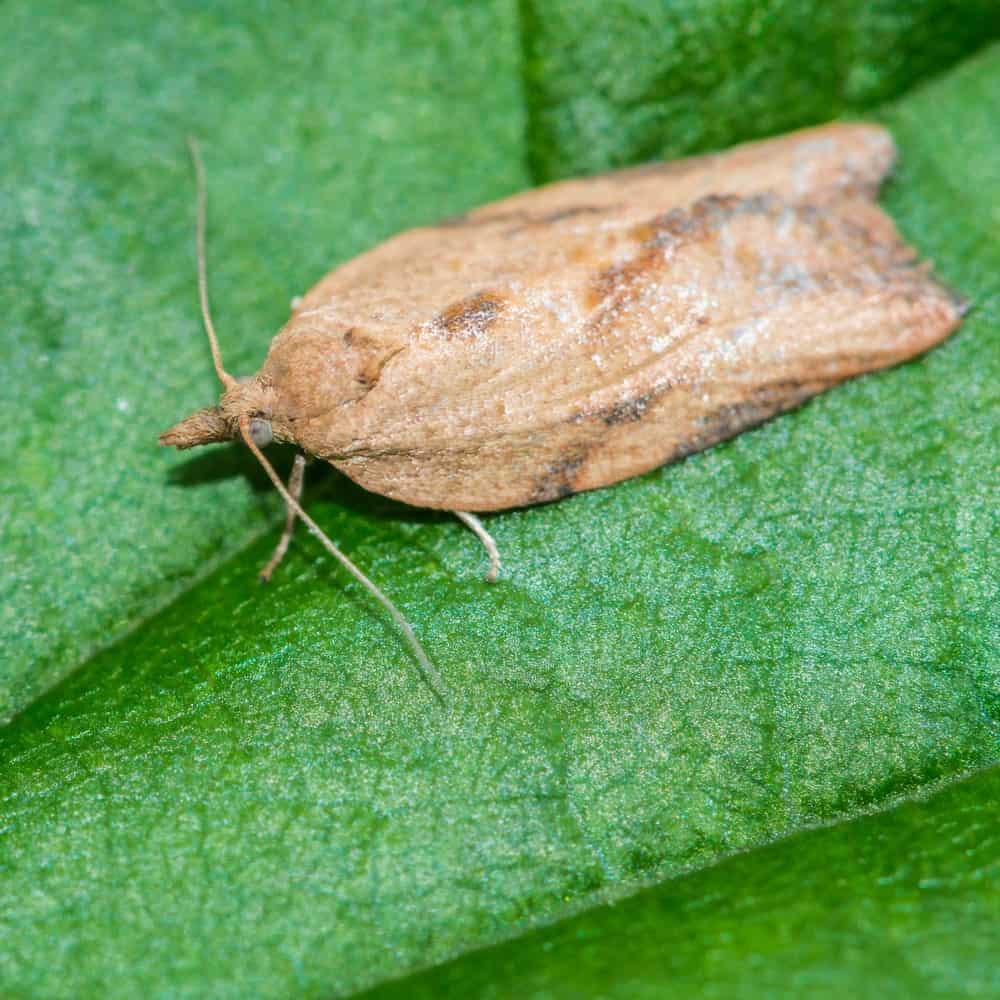 This is known as a leaf-roller moth and belongs to the Tortricidae family. It is an extremely polyphagous insect and is known to particularly attack fruits such as apples.

The population of light brown apple moths is really restricted in the United States; however, they still pose a great threat to agricultural and ecological systems.

The adult males of these species are often confused with other leaf roller moths, particularly due to their varying colors. The males have a forewing that grows to an average of 6-10 mm in length that is usually a light brown color. The female adult moths, on the other hand, have a forewing length of 7-13 mm and their forewings have darker colored tips with oblique markings.

Fascinatingly, the light brown apple moth is quite popular for its feeding habits and is known to feed on approximately 123 dicotyledonous plant species. Out of these, 22 are native to Australia.

Home Expert (Bot)
Hello, how are you? Ask me anything about interior design, home improvement, home decor, real estate, gardening and furniture.
64 shares