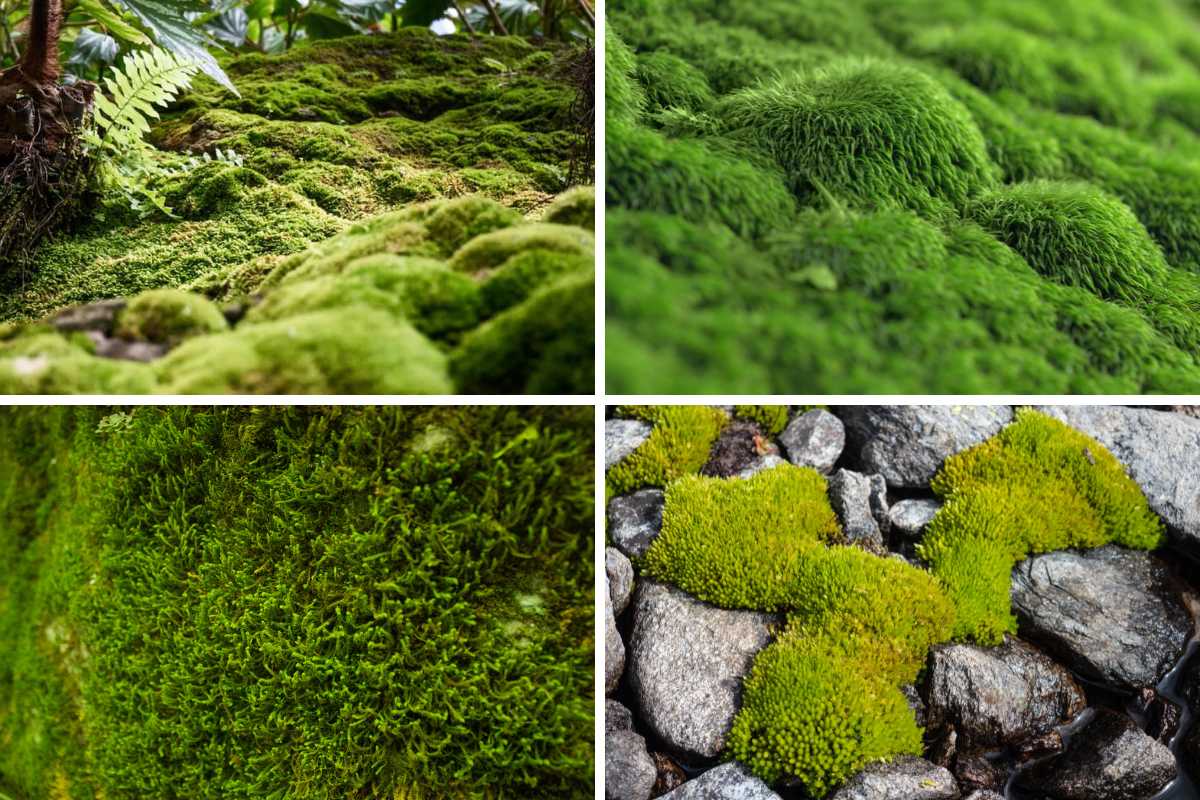 Moss comes under a separate classification of plants called Bryophyta. There are approximately 12,000 known species of moss. They are small, non-flowering plants that grow as dense, green mats or clumps in damp and shady areas.

They have leaves and stems, but no true roots. The leaves found on mosses are usually one cell thick. They are attached to the stem which may be branched or unbranched.

The stems have a limited role in the transport of nutrients and water. Unlike vascular plants, the conduction system of mosses is poorly developed. Mosses do not produce seeds.

They are sporophytes which mean that they produce spores after fertilization. Mosses do not grow to be very tall. They are typically 0.2 cm to 10 cm in height.

Some species of moss are fairly large and can grow as tall as 50 cm in height. They rely on moisture to grow because, in order to fertilize, male cells move through a film of water to the female cells. The process of fertilization can take place within a plant or between two different plants.

Mosses are confused with lichens, hornworts, and liverworts. The superficial appearance of lichens is similar to mosses but they are not related in any way. Hornworts and Liverworts are nonvascular. Hence, mosses got grouped with them earlier.

A haploid gametophyte generation was the dominant phase of the lifecycle in all of them. However, at present, mosses are classified under an entirely separate class which, as mentioned earlier, is called Bryophyta.

Mosses are classified into two classes. These are:

Acrocarps have an upright growth habit. They are erect and unbranched. They form a mounded colony.

They grow slower than the Pleurocarpous mosses. According to Encyclopedia, Acrocarpous Mosses are those in which the female sex organs (archegonia) are present at the tip of branches or stems. The sporophytes emerge from tips of the plant.

This type of moss does not regenerate from its fragments as rapidly as the Pleurocarpous mosses. The stems of Acrocarps are so thick and dense that it is highly unlikely that weeds will attack them. Acrocarpous mosses cannot tolerate constant moisture for periods longer than two to three months.

If they are exposed to moisture continuously, they will rot. In order to survive, they need to periodically dry out. Because of their height and periodic drying out, they are not fast growing.

A fragment or spore of Acrocarpous moss may take up to 2 years to form a carpet of moss. The common Acrocarp mosses for gardens include Dicranum scoparium, Polytrichum commune, Luecobryum glaucum, and Campylopus introflexus.

Pleurocarps grow in a prostrated position. They form spreading carpets. They branch freely in a chaotic manner.

They grow rapidly. According to Encyclopedia, Pleurocarpous mosses are those in which the female sex organs (archegonia) and the capsule are found on branches that are short and lateral. They are not found on the tips of branches as in Acrocarps.

The sporophytes emerge on the mid of the stem. They regenerate rapidly from their broken fragments. They attach quickly to the stone.

This feature, along with its fast growth rate, makes them a better option for colonizing hard substrates. Due to their low, even profile, their maintenance is easier. Pleurocarpous mosses can tolerate constant moisture.

Some species may even be found submerged. They are fast growing and their ever-branching character makes them spread over a new territory. They can double in size in just six months. 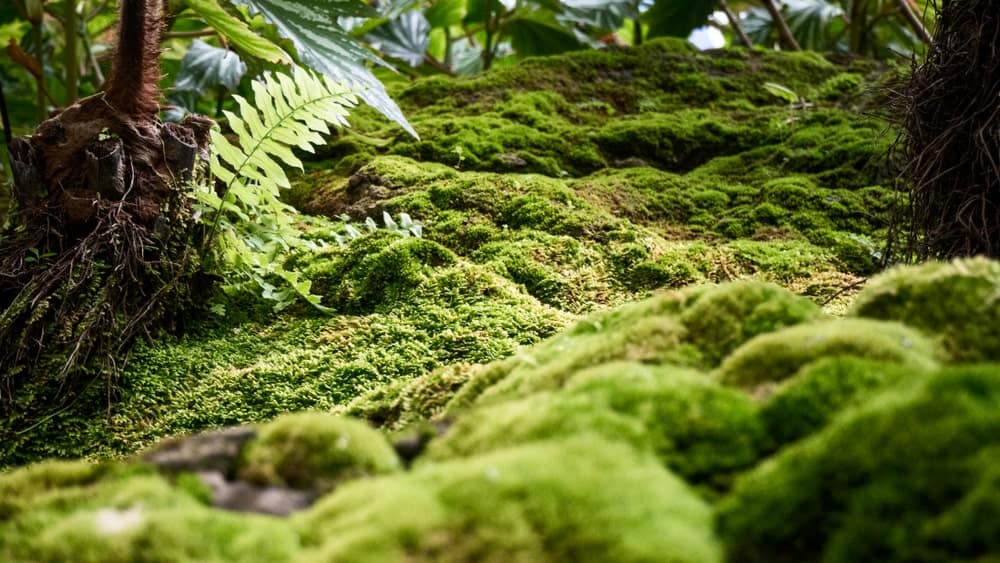 The most commonly known types of moss are listed below:

Common Haircap is an Acrocarpous moss that is most commonly found in regions which are humid and receive a lot of rainfall. They are one of the tallest species of mosses. They can grow as tall as 30 cm and rarely, up to 70 cm high.

It is dark green in color but as the plant age, it turns brown. Each stem of this type of moss looks like a pine tree. The leaves of Common Haircap are usually 6 to 8 mm in length and can be as long as 12 mm.

Silky Forklet Moss is an Acrocarpous moss. It is commonly found growing in woodlands, banks, ditches, and on tree stumps. They grow best in acidic soil.

The leaves of Silky Forklet Moss are long and narrow. They are green-yellow in color. All the leaves are curled in the same direction which forms clumps that grow to be about 3 cm tall.

Each leaf is about 3 mm to 3.5 mm long. They remain curved in both moist and dry conditions.

Swan’s-Neck Thyme Moss is one of the most common types of moss. It has upright stems. It is dark and dull green in color.

It is most commonly found growing on rotten wood, tree bases, rock ledges, and peat. They grow best in acidic soil. The leaves are approximately 4 mm long and can grow to be as long as 8mm.

They grow upright, towards the tip of the shoot. The lower part of the stem has leaves that are smaller and narrowly triangular.

Common Tamarisk Moss forms thick mats or tuffs. They prefer shady places with heavy soil. Hence, they are most commonly found in woodlands, rotting woods, and on trees.

The leaves are bright yellow-green in color. They are delicate and small. Each leaf looks like a pyramidal fan.

It is a branched moss. The branches emerge from opposite sides on a stiff stem and get smaller as you move upwards.

Glittering wood moss tend to form widespread carpets in woodlands, moors, and heaths. This type of moss prefers shady areas and grows in soil and humus. It is also found growing on decaying wood, it forms mats on top of older, dead or dying portions of moss.

They are yellowish-green in color. The shoots of this moss can be as long as 10 cm. They grow best in acidic soil.

It has red stems and is glossy in appearance. The branches can be up to 20 cm long.

Square Goose Neck Moss forms a mat of branching stems. It is usually found growing in damp areas such as marshes, woodland near streams, and in man-made habitats such as lawns and golf courses. The branches are up to 15 cm long.

The leaves are 2 mm to 2.5 mm long. Leaves bend sharply at right angles. As a result, they spread outwards from its stem.

Sphagnum species are known for their capacity to hold water. They can hold 12-16 times as much as their weight of water and hence, they can spread into drier places. They are commonly known as the peat moss.

They are found growing in boggy and wet areas. They grow best in acidic soil. They can form a bog mat that can float on the water surface. Their roots are very shallow.

The leaves of Sphagnum species are small and toothed. They grow close to stem in hair like tuffs. The stems are no higher than 4 inches.

Leaves are light green in color. However, some species may have brown, deep red, yellow, and pink leaves as well.

Propagation of moss can be efficiently done by using divisions or fragments of moss. A large division that is broken down into smaller fragments that are spread about in the area will speed up their growth. Once the growth has carpeted an area, it will continue growing and be visible in the form of increased thickness of the carpet.

Larger divisions provide more stability and faster recovery. Smaller fragments take more time to fill up. Due to the habit of Pleurocarpous mosses, they will spread rapidly and respond with new growth in just 3 months if they get adequate moisture.

The stems will keep branching. However, Acrocarpous mosses will respond much slower to the fragmentation technique because of the limitations posed by its nature. They may need at least 6 months to anchor themselves to the substrate and an additional 12 months to grow.

Pleurocarps can stay in a growth mode throughout while Acrocarps cannot because of their need to dry out periodically.

Growing Moss in Your Garden 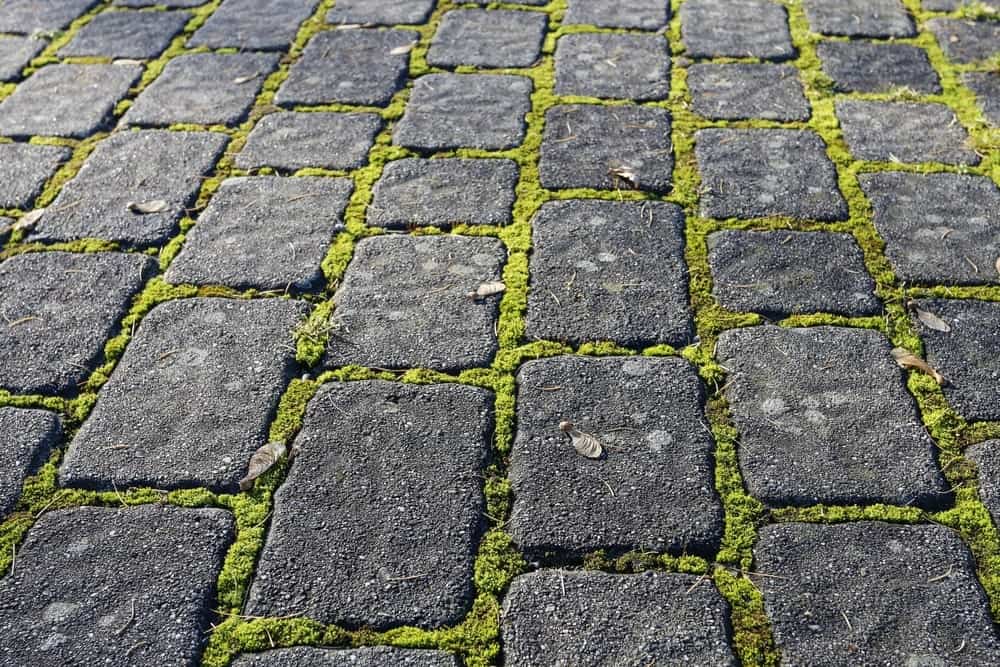 If you are planning to grow moss in your garden, you can certainly do it. Growing moss is not difficult.

Moss can be used for creating outdoor art. You can pour slurry in patterns and shapes that you like and see them come to life as moss grows.

Why Is Moss Planting a Good Option?

There are many reasons why you should plant moss instead of grass. Moss not only looks rich but also provides your garden a lively look. Some reasons why moss planting is a good option have been listed below:

Unlike other plants in your garden that need protection from pests and insects, moss does not require pesticides. Moss tastes bad to insects which protected it naturally. If you want to plant something that keeps you safe from bearing the cost of fertilizers and pesticides, mosses are your best bet!

Grass needs mowing. You release a lot of carbon dioxide through the mowers. This causes air pollution.

With mosses, you don’t have to worry about being a contributor to air pollution because mosses do not need mowing.

Most plants require a lot of water on a regular basis. If you live in an area where the water is not plentiful or is often met by drought, planting moss is the best option. This helps in conserving water.

Mosses can survive with only a small amount of water. Just brief, light watering sessions are good enough for mosses.

Mosses act as the guardians of soil and keep it from eroding. The varieties of moss that grow upright can be grown on steep slopes to prevent the soil from getting washed away. This technique is specifically useful in hillsides where the soil is low in nutrients.

Since mosses are not demanding species, they can grow and be beneficial without any hassle. Moss may look like an unwanted and useless plant but it holds environmental significance. Moreover, they provide green carpets in areas that lack aesthetic appeal.

The appearance and growth rates vary with types of mosses but they sure are underrated!