This probably isn’t the first time that you’ve sought out information about medicinal mushrooms. Their popularity has absolutely boomed in the past couple of years, although research into their benefits has been happening since the ’60s.

The recent influx of information on medicinal mushrooms is due to the fact that until now, holistic medicine and preventative natural remedies have been left on the back-burner. Westernized medicine tends to focus on fixing problems once they’ve reached their crux of destruction, instead of finding ways to prevent illnesses from happening. We’re only now catching up with the traditional Chinese ways of medicine and focusing on prevention instead of disaster control.

There are thousands of species of mushrooms with mind-bogglingly (I wish that were a word) beneficial properties. Mushrooms can help in increasing immunity, to increasing your libido! Today we’re going to look a little further into The Royal Family of Fungus: Lions Mane, Turkey Tail, Reishi, Chaga, and Cordyceps.

(As we speak, I am drinking a cup of coffee splashed with a couple of mushroom tinctures of my own. Every day twice a day, I take a Chaga and a Cordyceps supplement from an awesome Canadian company called Rainbo.)

Mushrooms have often be called the earth’s immune system, and that is a very accurate statement. The fungus is correlated with death and decay, but in order for life to thrive, things must die. Many mushrooms are saprotrophic, meaning that they digest decaying matter. But this cycle of life, death, and digestion is what keeps forests alive. Much in the same way that a body stays alive by fighting off harmful bacteria and illness with its immune system, this process involves the death of that harmful bacteria. 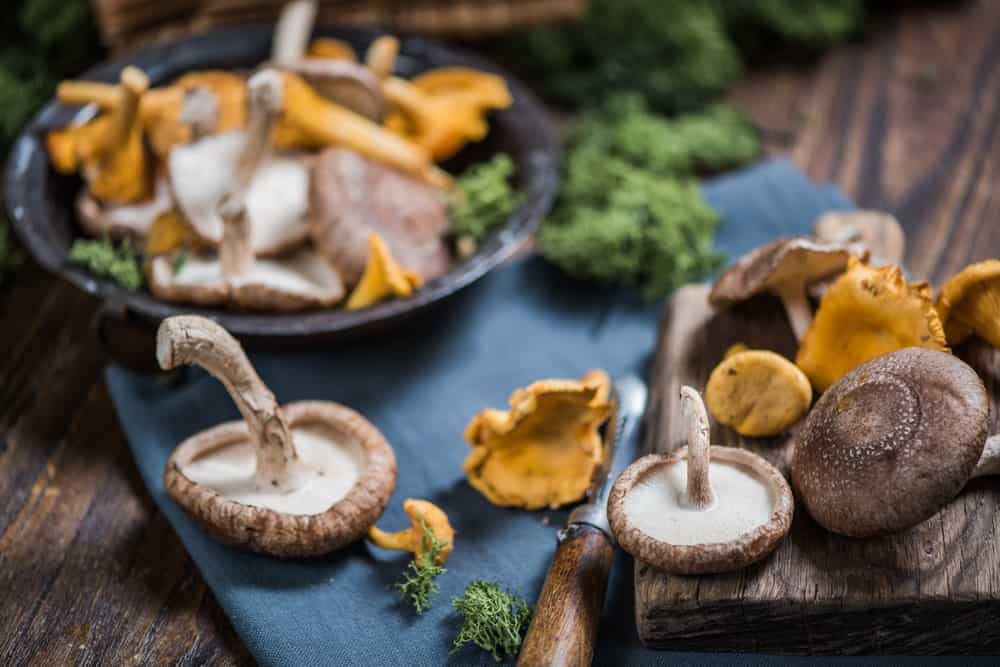 Mushrooms are one of the oldest organisms in all of existence. Fossils of mushrooms found in remote Arctic Canada have been dated back to an astonishing ONE BILLION YEARS. Something surviving for that long was definitely doing something right, and throughout their existence fungus has developed symbiotic relationships with plants, people, and animals.

It is wise for humans to take advantage of the knowledge from an organism that has outlived dinosaurs. Mushrooms have proven to aid the human body in many ways, from memory retention to sexual drive, to alertness, to immune system support.

Mushrooms have their very own root system that is as intertwined and expansive as the root system of trees. This root system is called a mycelium. The largest living organism on earth (yes, bigger than a blue whale) is a mycelium root system in the Malheur National Forest in Oregon. It spreads an astonishing 2,835 acres. 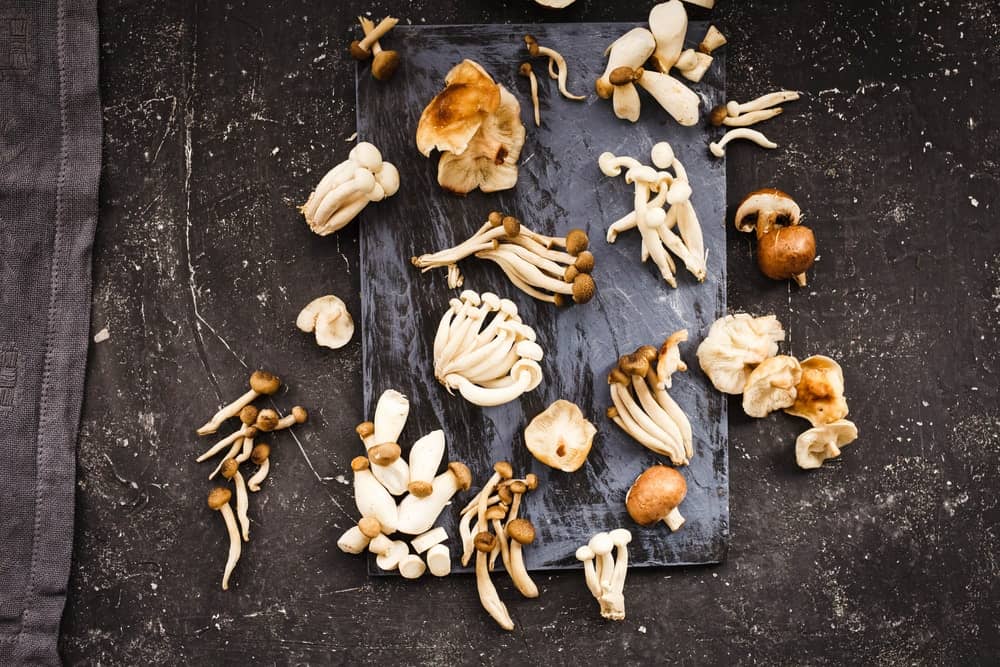 It is hard to deny the power that mushrooms hold once you realize that they are the oldest, largest, most varying, strangest organisms on our planet. Did you know that fungus is literally in between distinction? It is not an animal, and it is not a plant. So what is it? 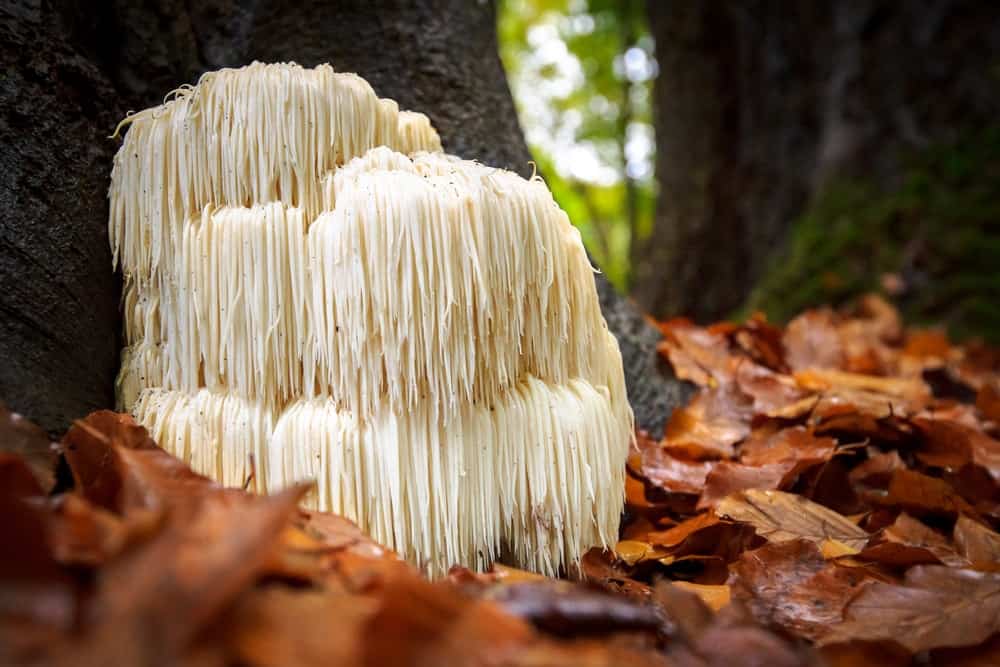 Lions mane mushrooms are part of the tooth fungus group since their fruiting body is an eruption of narrow tooth-like spines. They grow in sometimes enormous clumps of dangling spines with no cap or stipe (this is the stem of a mushroom). An inexperienced mycologist would walk by a lions mane mushroom and have no clue that it was a mushroom.

The lions mane is considered as being a choice edible, meaning that it will be intensely tasty when cooked. This mushroom has been used in traditional Chinese medicine for over 2000 years, and these are the reasons why. 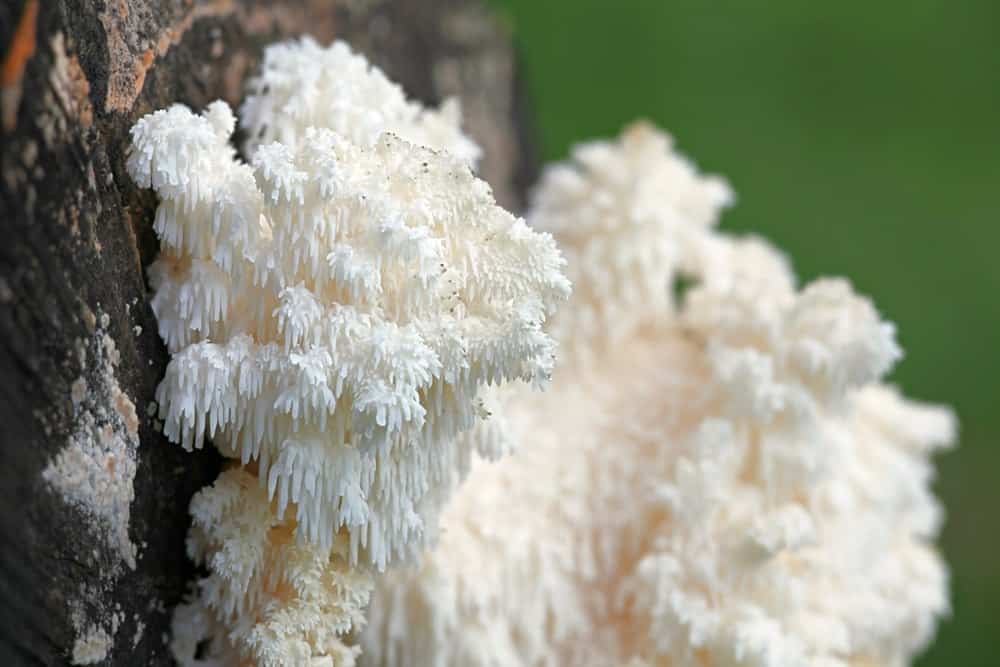 Lions mane is the king of the mushrooms, as it is one of the only organisms on the entire planet that is neurogenic. When humans ingest lions mane mushroom, the brain actually grows new brain cells that result in synaptic connections. This is an unheard-of occurrence, seeing as the very concept of aging is the fact that new cells are created slower and slower, without any way to stop it.

The lions mane is filled with antioxidants, this is something that is essential in fighting inflammation and oxidation in the human body. This targets issues like autoimmune disorders, heart disease, and diabetes. More and more studies are being done in relation to the lions mane mushroom and combatting Alzheimer’s.

Get to know the Lions mane and why it’s the king of the mushrooms. 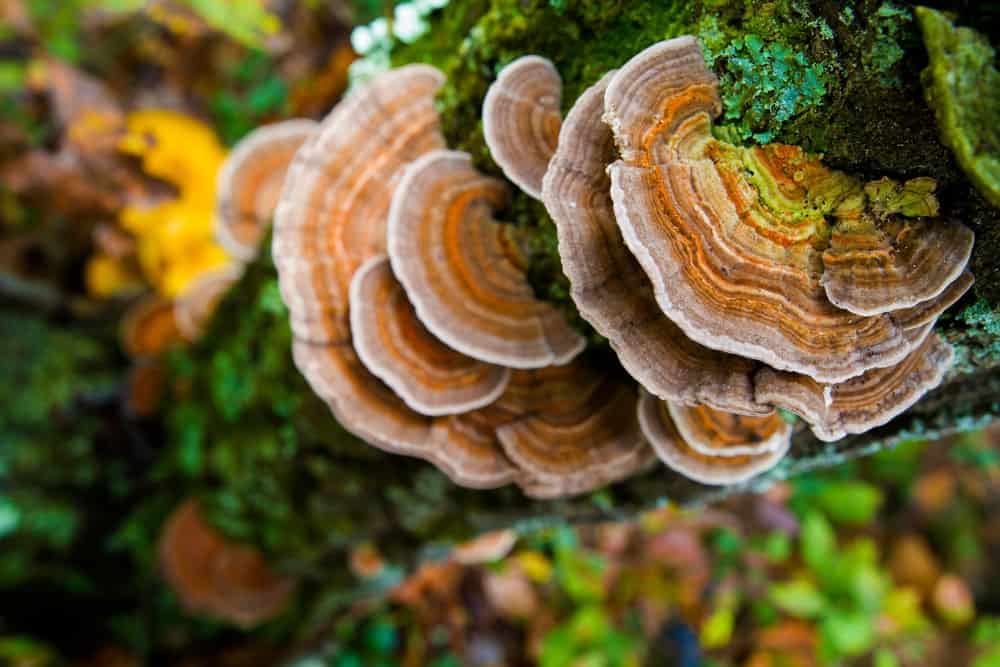 The turkey tail is a polypore, meaning that it’s a mushroom with a large fruiting body with pores on its underside where spores are released. It has an indistinct stripe and is saprotrophic (remember, it digests decaying matter). The word Versicolor means “many colors”, hence where the scientific term comes from.

The mushroom itself has a quite leathery and firm texture. A flat cap with tiled layers makes for quite a stunning fungus. 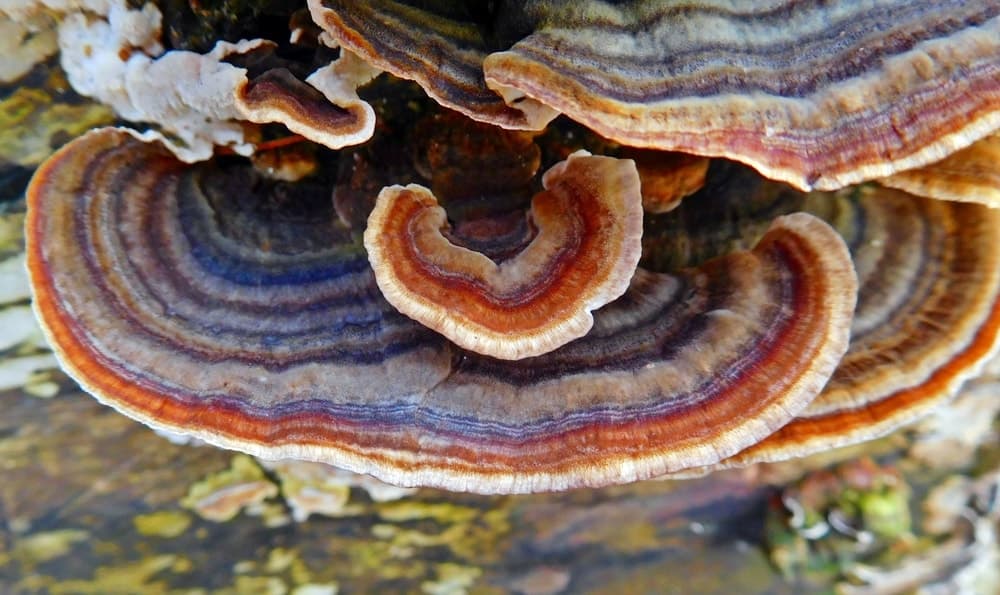 Much like lions mane, the turkey tail mushroom is also packed with antioxidants. It seems that much of human illness comes from the stress that affects our insides. Antioxidants help remedy physical stress and combat unstable molecules (that can be cancer-causing).

It is not uncommon for turkey tail and anti-carcinogenic to be put in the same sentence. This is because of the two properties polysaccharopeptide krestin (PSK) and polysaccharide peptide (PSP). PSP encourages the growth of monocytes, which are white blood cells that fight infection. PSK activates white blood cells that protect against harmful bacteria. Both of these properties exist in the turkey tail mushroom.

Learn all about the turkey tail mushrooms here.

The Reishi Mushroom – Queen of Immortality 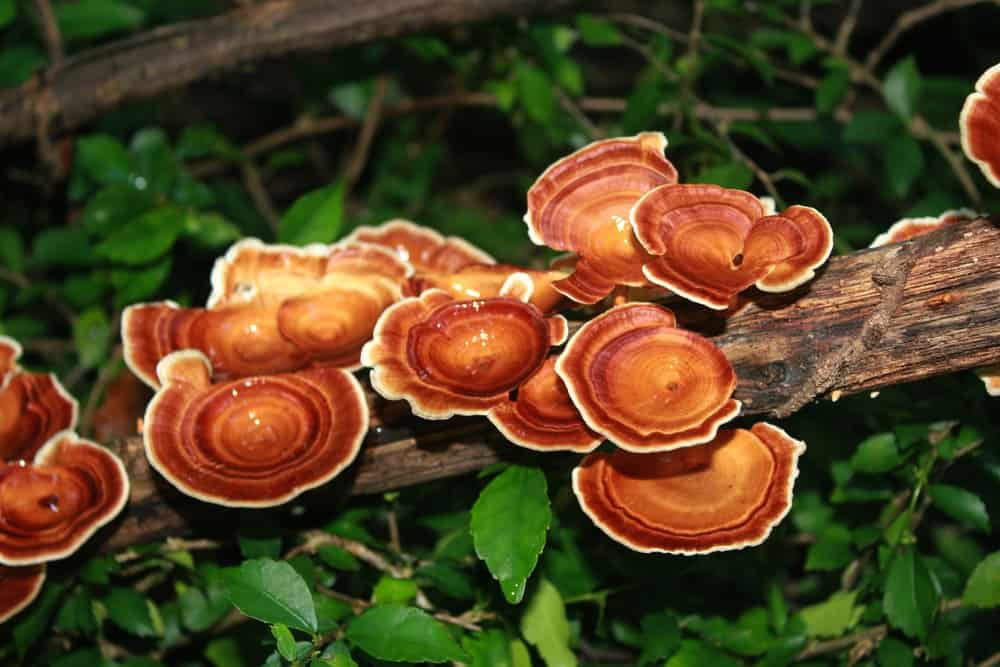 The reishi mushroom is both parasitic and saprotroph. We already know what saprotroph means (digestion of decaying matter in case you forgot the other two times I mentioned it), but parasitic is when it feeds off of and eventually destroys another living organism.

The reishi has a kidney-shaped cap with a red varnish effect. It has an indistinct stripe, a brown spore print, and is considered to be edible, but not a choice edible. This doesn’t mean it’s unsafe for ingestion, it simply means that eating it isn’t particularly tasty. That’s why reishi is often turned into a powder or tincture. 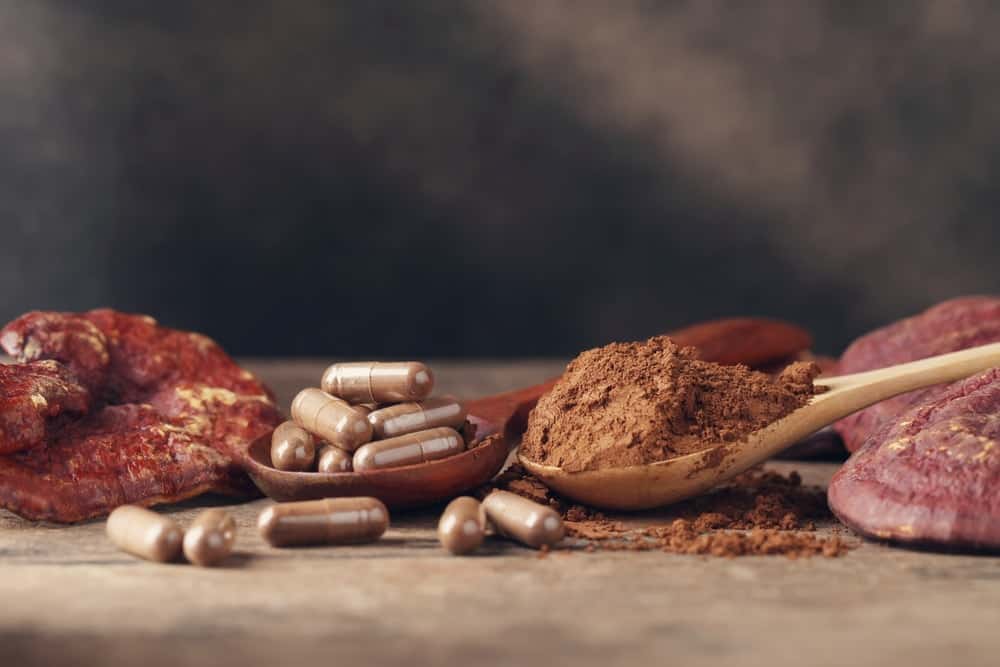 The reason being for the name “mushroom of immortality” dates all the way back to the Han Dynasty, where the reishi mushroom is described in a poem as being integral to qi – life force. Although reishi has been used in traditional medicine just as long as the others, there is a great lack of scientific studies done with the reishi mushroom.

It is expected that taking reishi supplements helps support a healthy sleep cycle, helps the body adapt to stress, and helps with mental awareness.

For the lack of evidentiary support, we do know that reishi mushrooms are packed with minerals, vitamins, amino acids, and other dietary fibers.

Find out more about the reishi mushroom of immortality here.

The Chaga Mushroom – Princess of Superfood 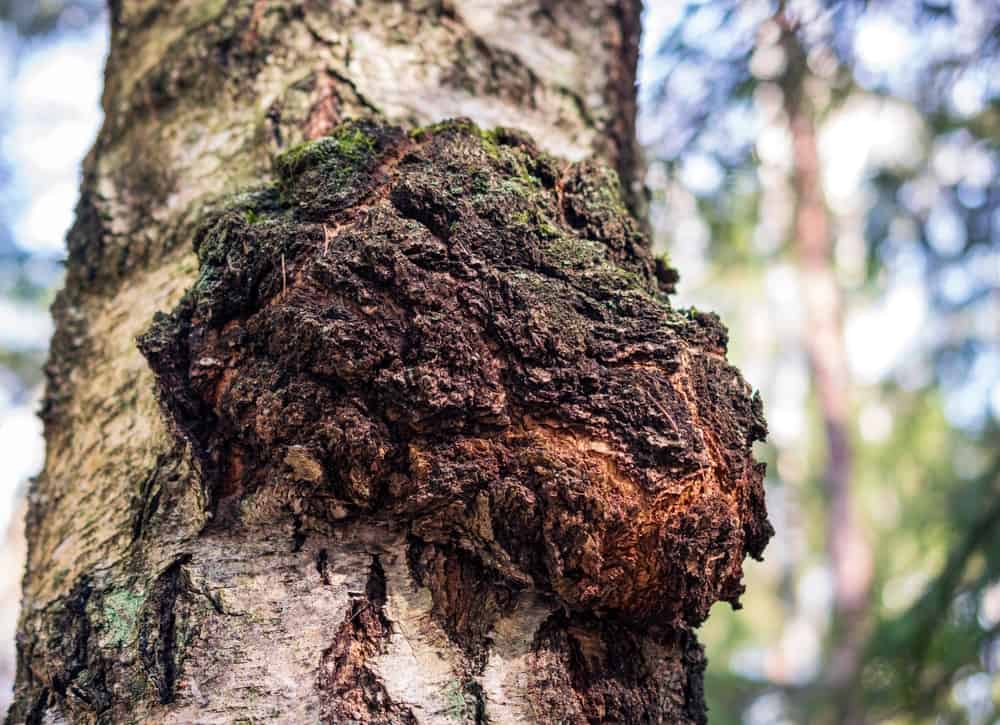 The chaga mushroom is a parasitic mushroom. It posses no distinct cap or stipe, and if you walked by it you would have no clue that it was a mushroom. What is seen of a chaga mushroom is actually its mycelium (remember, that crazy root system?). It resembles a strange inky, gooey mass. It’s black in color because it contains enormous amounts of melanin, which we know to be what produces pigment in living organisms. 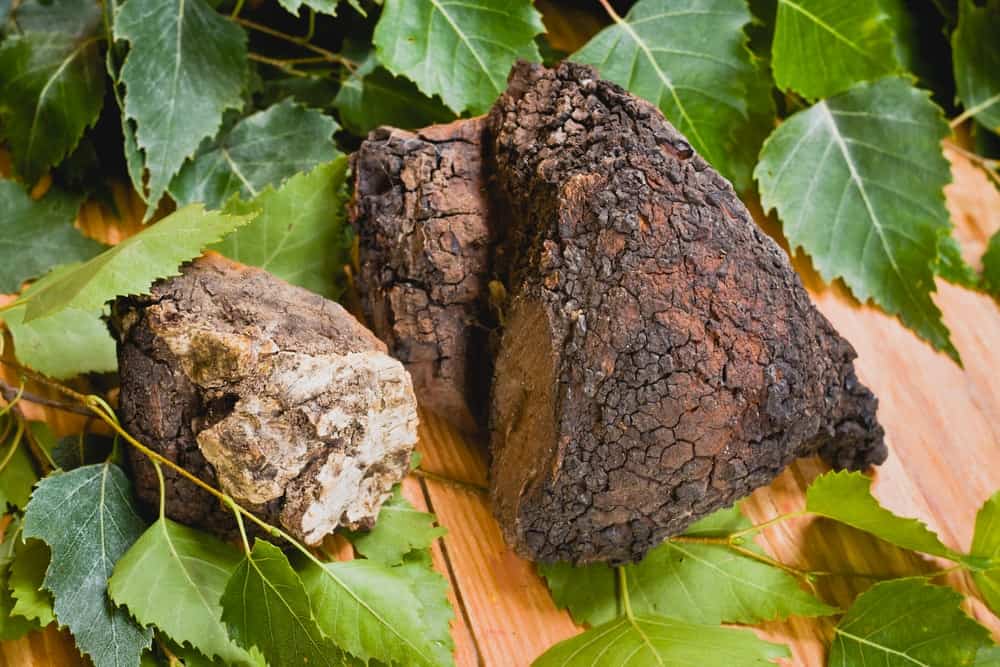 The reason why the chaga mushroom is considered a superfood is because of the bonkers list of healthy things that exist inside it. Are you ready for this?

Chaga is also riddled with antioxidants, which help with oxidative stress. This is important in trying to prevent physical signs of aging. Chaga mushrooms regulate the production of cytokines which are the immune systems, chemical messengers. This means that cells in the body are better at communicating with one another and are quick to respond. 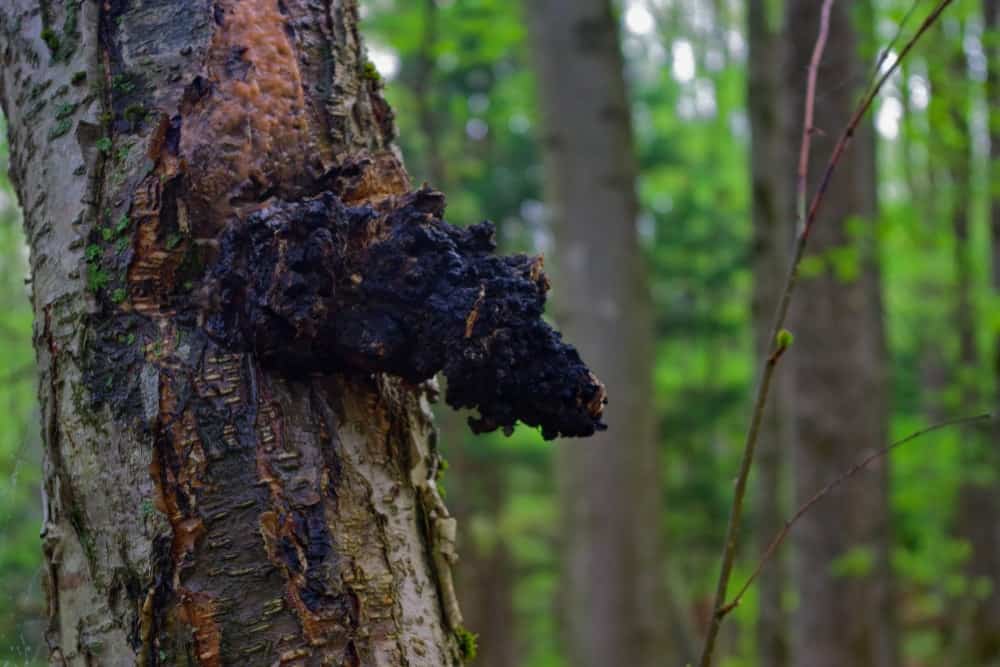 Also found in chaga mushrooms is something called triterpenes, and these are compounds that cause cells to literally self destruct. This is what we want in a cancer treatment honestly, since so many of the ones we have now also harm healthy cells. 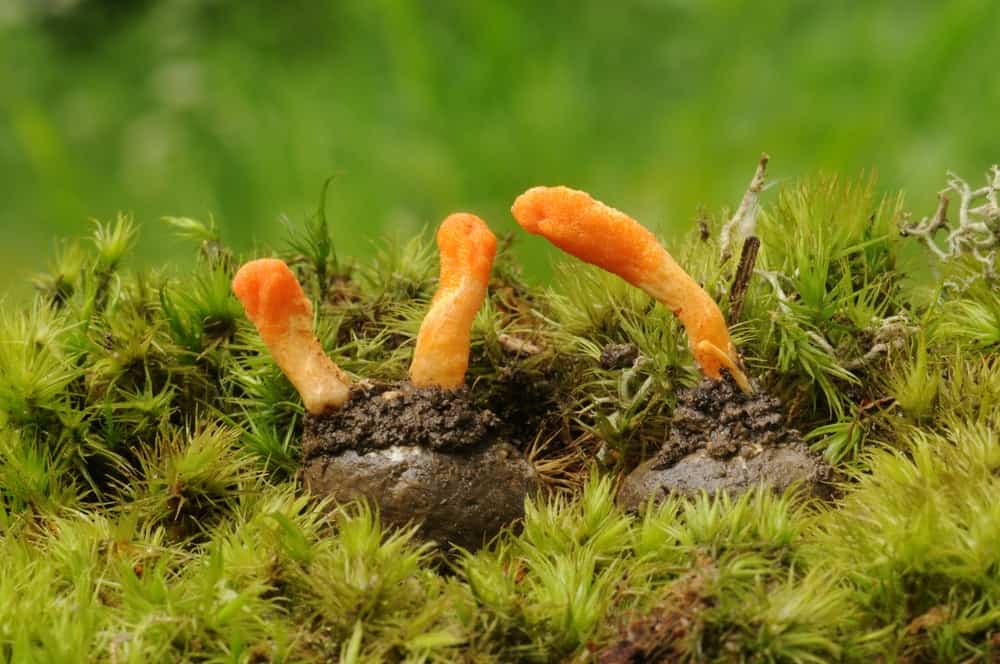 Woo! This is an especially interesting one. The cordyceps mushroom is entomopathogenic, meaning that is it parasitic on insects and arthropods. Buckle up kids, this is weird:

When a cordyceps mushroom attacks its host, it does so by spreading spores. When spores land on an insect, the spore germinates. Threads of mycelium invade the body of the host and replace the entire inner tissue with mycelium. Eventually, the fruiting body literally stabs its way out of the host’s head.

The cordyceps mushroom looks like orange fingers poking out of the ground, and is another of one of those weird ones that are almost unrecognizable as a mushroom. This mushroom is extremely rare, coveted, and expensive. 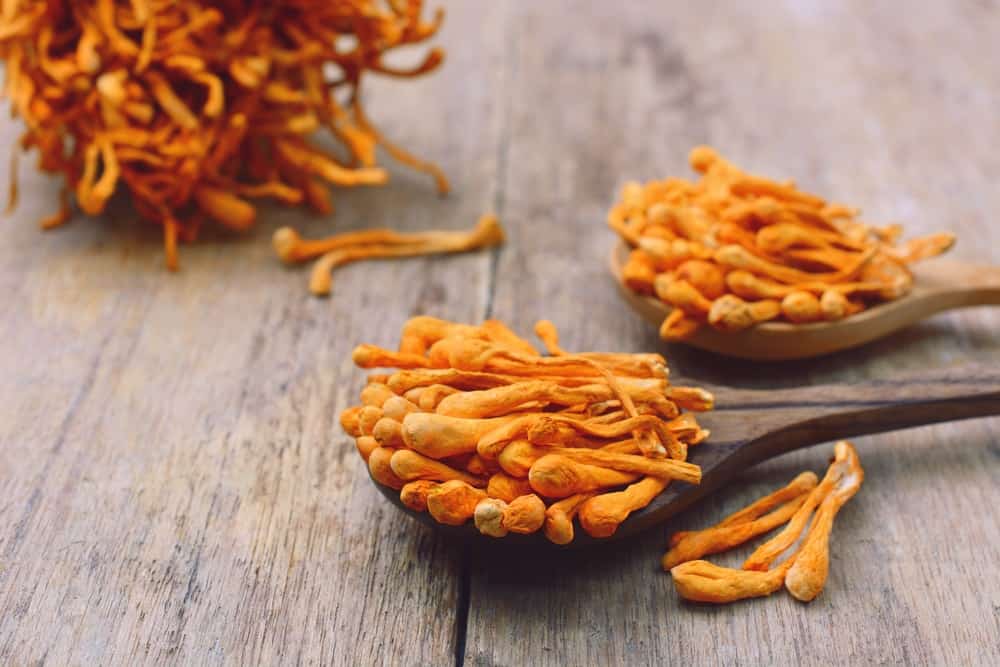 This is the mushroom we’re talking about when we refer to the libido booster. Cordyceps helps the body with blood flow and oxygenating the blood. This helps with athletic performance, specifically with muscle fatigue and lung capacity. Healthily oxygenated bodies perform better. It decreases inflammation, regulates hormones, and combats free radical molecules.

Find out more about the cordyceps mushrooms here.