Learning about the many different types of meads is an exploration of the world's various cuisines since you'll find many variants in the different continents on top of the most popular ones we're already familiar with. 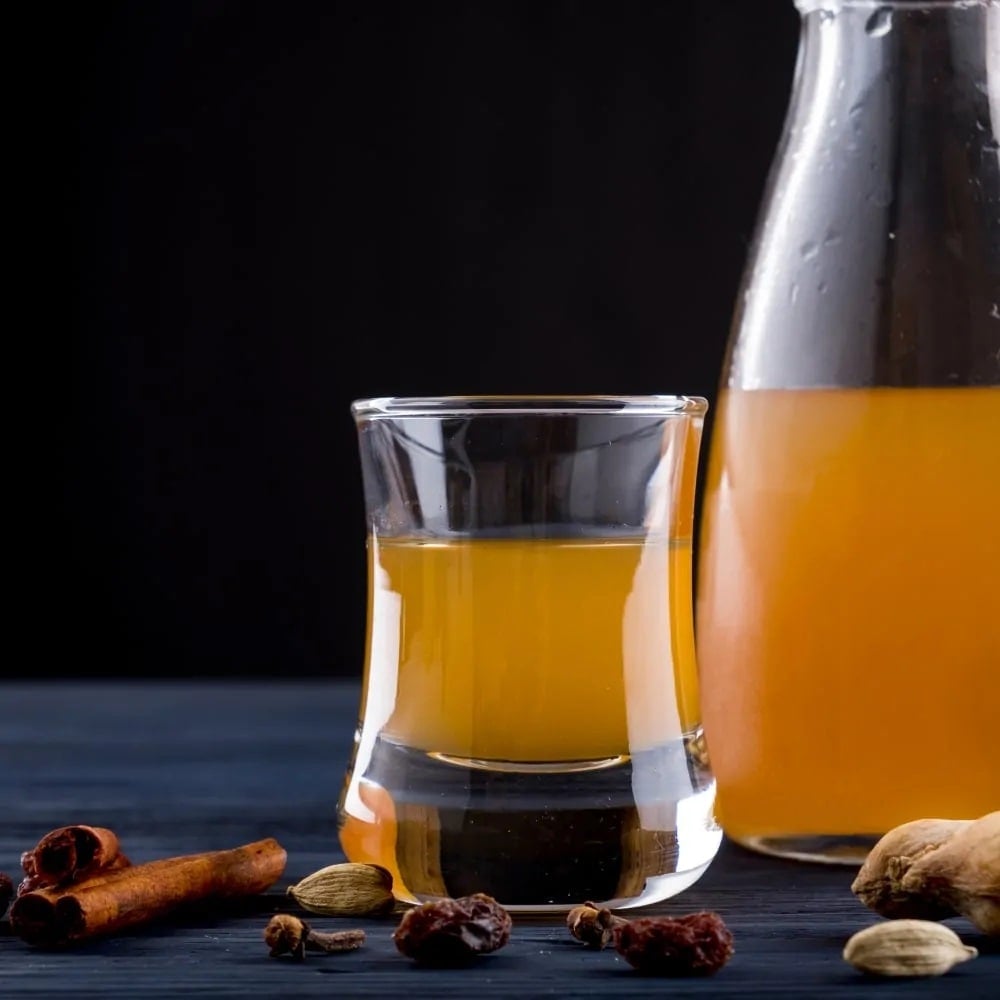 Mead, also known as honey wine, is an alcoholic beverage which consists of honey and water as its primary ingredients. Often times the beverage also incorporates various fruits, grains, hops, and spices.

The defining characteristic of mead is honey which gives it a unique, traditional flavor. Taste of the beverage can vary depending on ABV content, water ratio, how long it has been aged and the addition of endless ingredients. In short, mead has as many varieties as its makers. 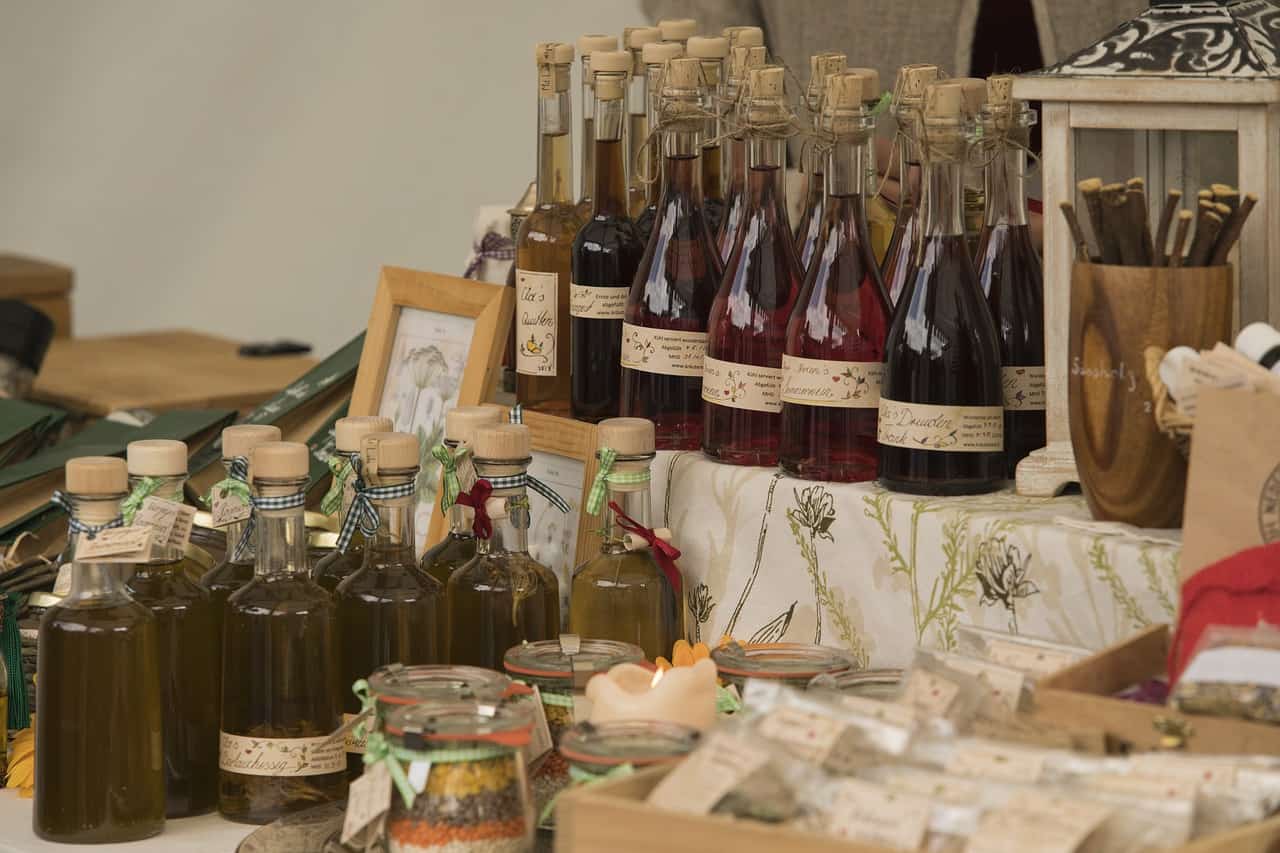 Known as the “nectar of the gods,” mead was believed to be descended from the heavens in the form of dew before it was collected by the bees. Mead is believed to be the oldest fermented drink. No one knows exactly when mead was discovered but there are plenty of speculations.

Since mead is a natural occurrence of yeast and water, some believe mead was accidentally discovered during the Stone Age when someone discovered honey, which had become wet with rain and got contaminated with airborne wild yeast.

Tales of mead have been recorded throughout history. The Egyptian pharaoh, King Tut, loved mead and so did the Norse explorer Erik the Red. There are stories of Norsemen toasting each other with mead, which was drunk from the skulls of slain enemies. The Norse gods were also known to give goddesses cups of mead to seduce them.

According to Greek mythology, Bacchus was first known as the God of Mead before he became the God of Wine. In his honor, the Greeks celebrated a “liberating” event once or twice a year, during which they participated in drunken revelry and sexual indulgence.

During the Middle Ages, Queen Elizabeth is recorded to have her own recipe for mead. The alcoholic beverage was a favorite of Shakespeare and Chaucer, who wrote about mead on various occasions. In Germany, army troops were also plied with mead to fortify themselves.

However, the most noteworthy aspect of mead comes from its origin in wedding celebrations, and hence its name “honeymoon.” The beverage was drunk during the month-long wedding festivities to ensure fertility and the birth of sons.

Mead has been mentioned in the writings of Beowulf and King Arthur and was hailed as a royal drink. Even though the beverage was drunk by both nobles and paupers, in its declining years, it was exclusively consumed by royalty while the less privileged segments embraced beer, the drink of the commoner.

Mead can be distilled to brandy or liqueur strength. Interestingly though, mead is not legal in many countries including the United States and the United Kingdom. That is because it needs to be highly regulated due to its various methods of manufacturing, which involve ingredients, the aging process, and brewing methods.

However, it can be freeze distilled in the UK and many states of the US. This involves partially freezing the mead and then pouring the unfrozen alcohol as “honey jack,” much like the applejack from cider. This results in a very strong mead with double and triple the normal strength.

See also  What is the Lions Mane Mushroom? (The Medicinal Mushroom That Benefits For Your Mind) 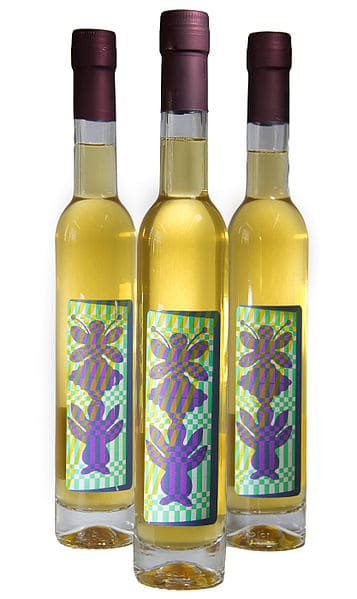 Factors Affecting the Quality of Mead

Water needs to be mixed with honey to ferment as honey is too viscous to ferment itself. If more water is added, the mead tends to be drier. However, here is a list of some other factors that affect the flavor of the beverage.

Alcohol by Volume: Mead can have an ABV ranging from 4 to 20 percent in most cases and even 75 percent in some regional meads, like the Lithuanian mead.

Color: The color of mead depends on the color and amount of honey used while brewing it. It can range from very pale, almost-clear amber to a dark molasses color. If the fruit is added to mead, its color can range from royal purple and pink to blue.

Esters: The fruity aromas of meads are due to yeast esters. They can be very low or high in content. 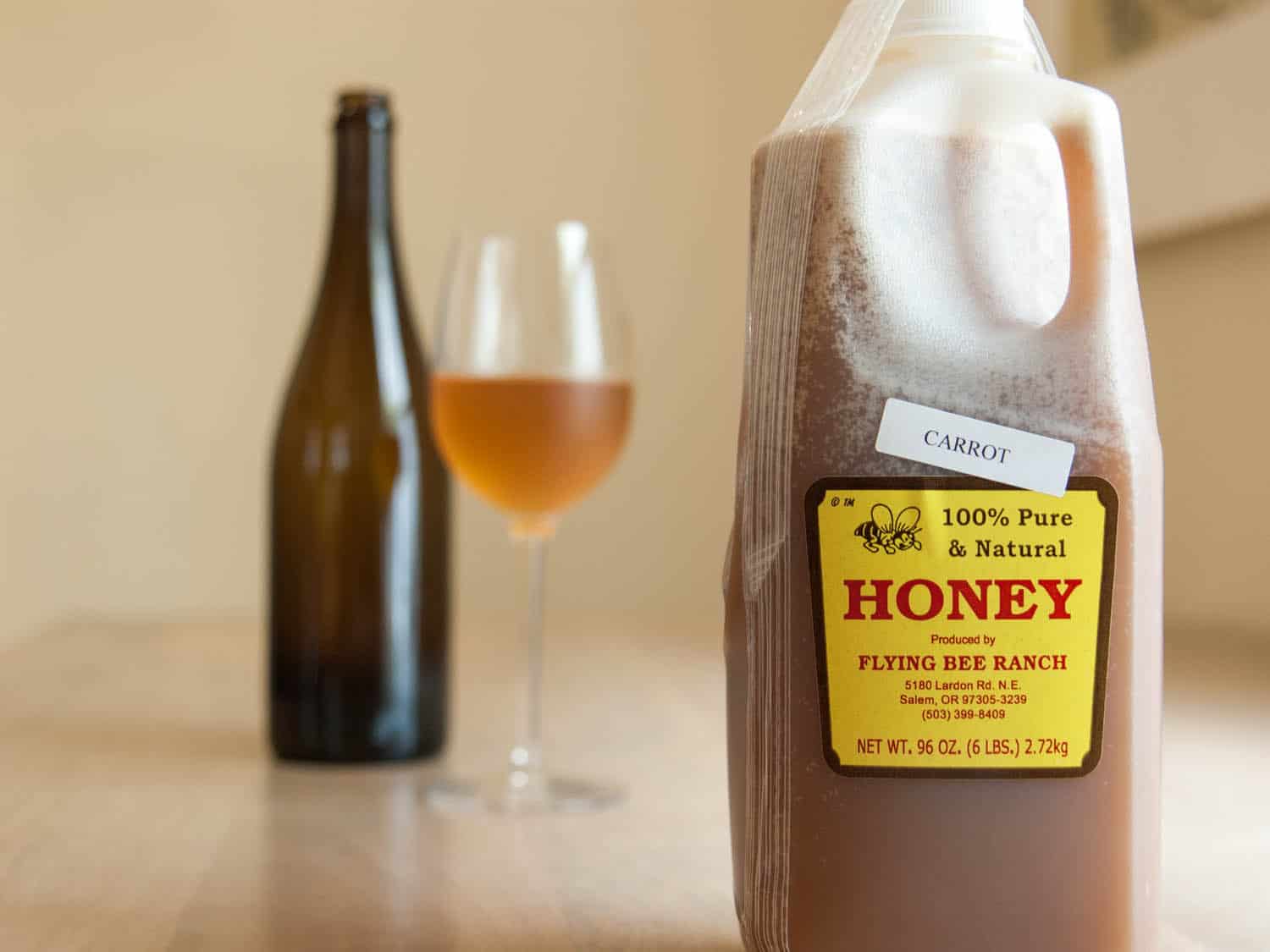 Alcohol by Volume in Various Types of Meads

Meads come with various alcohol levels. Here we are arranging the different types of meads from the lowest ABV to the highest:

Honey Liqueurs/Fortified Mead: Alcohol content as high as 60% or even higher

The varieties of mead are almost endless. Here, we will list down some of the most popular types in alphabetical order: 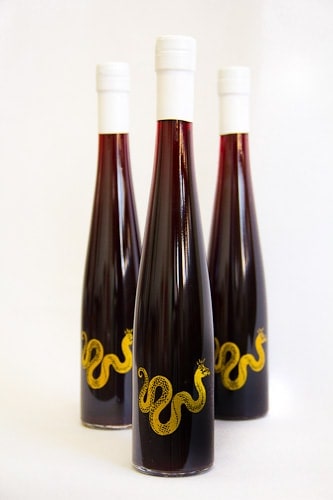 This mead uses maple syrup instead of honey. Although this means it is not a traditional type of mead, it is still considered a mead as it is made in the same way, with the exception of maple syrup.

As the name implies, this type of mead consists of black currants. The amount of the fruit varies according to the maker; however, because of the currants, its color is dark purple or reddish black.

This especially delicious mead is made from honey that is caramelized or burned before it is added to the water. This can create a wide range of sweet flavors like toffee, marshmallow, and caramel.

This is a variant of the Bochet-style mead and also contains berries like blackberries, black raspberries, and elderberries.

Also known as bracket or bracket, this type of Welsh mead first used to be brewed with honey and hops. Later, it was made with honey and malted grains, with or without the hops.

As the name indicates, this type of mead incorporates chili peppers.

This mead is quite similar to cider as it contains apples or apple juice. It is made by mixing apple juice with honey to ferment. Sometimes, actual apple cider is used instead of just the juice, though that is not always the case.

Dry mead contains low honey content, typically just 2.5 pounds of honey in a gallon of mead. This type of mead has a very dry flavor with almost no sweetness from the honey.

Great mead is brewed to be bottled and aged for a long period of time, typically several years.

This is a type of spiced mead that is seasoned with spices, especially cinnamon and is possibly heated.

This is watered-down mead, which contains typically 3.5-7.5% of alcohol. When water is added to alcohol, its ABV decreases, and, as a result, its flavors also become diluted. 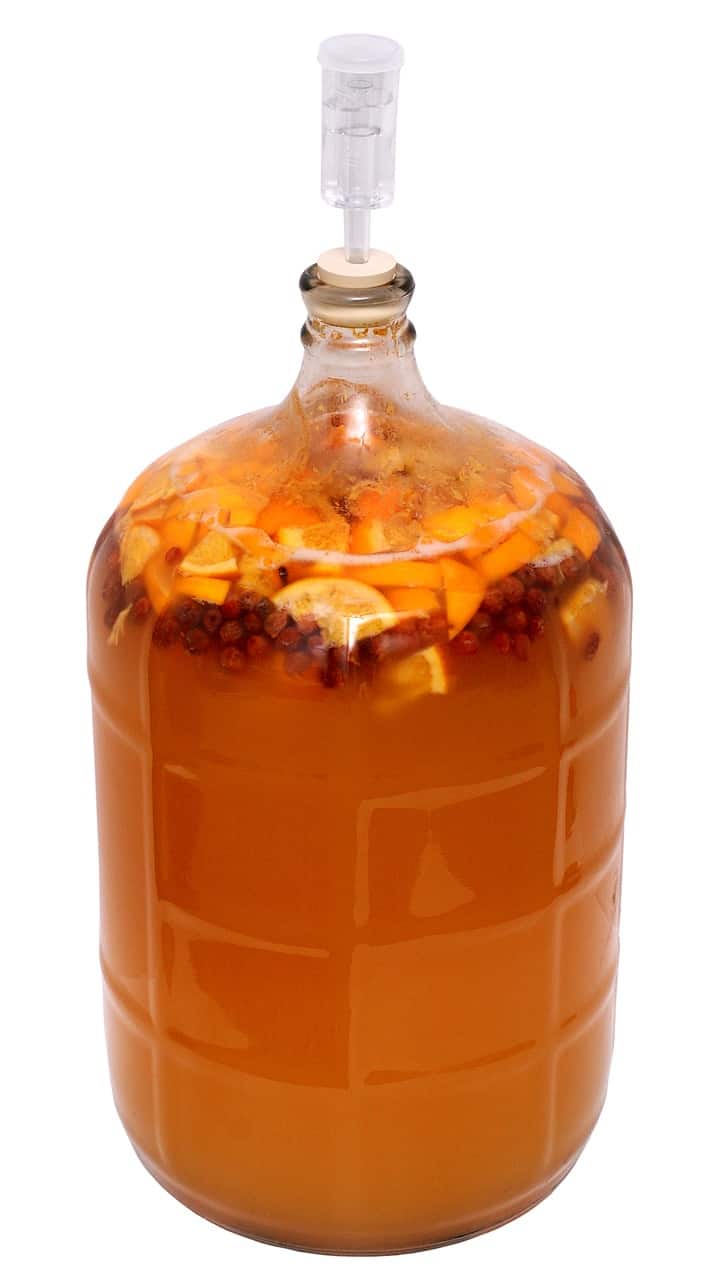 This is a type of mead in which spices, such as cinnamon, nutmeg, cloves, ginger, orange peel, tea, and vanilla, are added. Since metheglin contains a wide variety of spices, it is also believed to have medicinal properties, besides being a very delicious drink.

This is a variant of melomel that is specifically created with a blend of honey and mulberries.

This type of mead typically includes fragrant spices and is warmed before heating. They are very popular during holiday seasons, especially in colder regions.

This mead is brewed with the juice of unripe grapes or verjuice and is a variety of pyment (explained below).

Oxymel, literally meaning acid and honey in Latin, is a historical mead variant that consists of wine, vinegar, and honey. 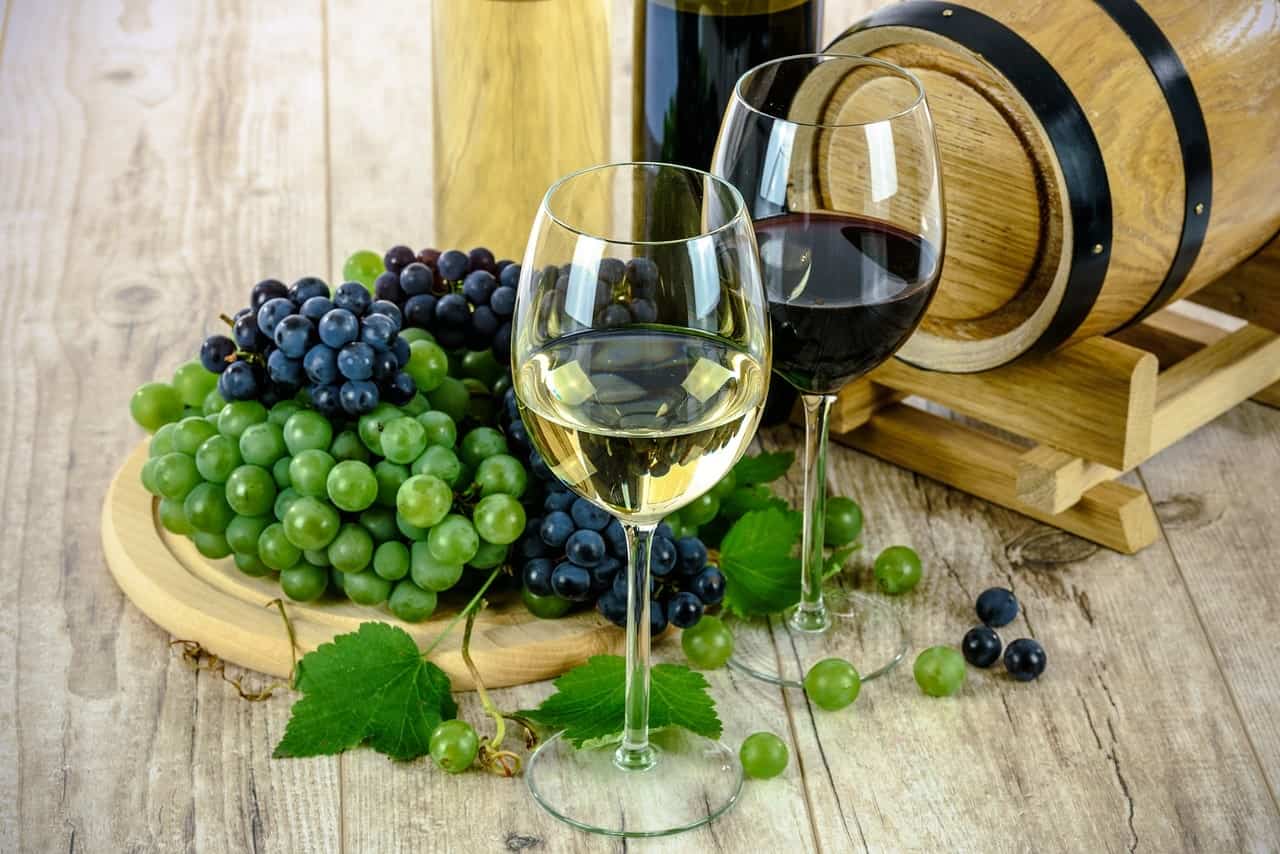 Pyment is referred to several varieties of mead that is made with grapes, grape juice or grape wine. These meads depend on additives for their color and flavor.

Translating literally to “rose honey,” this mead is made from honey, rose petals, rose hips or rose attar. Sometimes, other additives are added to the mead to bring out new flavors; however, the very distinctive floral taste of roses is considered very delicious.

Sack mead contains a high density of honey and, as a result, is very sweet. In fact, it is considered as the dessert wine of meads. The ABV is usually 14-18%.

Also known as quick mead, this mead needs very little time to mature. This means it can be brewed in just 3 days to a month. Because of the technique used to age them faster, short mead shares some qualities with ale and cider. In fact, some people also compare their taste to that of ale.

This is a basic or plain type of mead that does not have any added fruit or spices. It is usually only made of water, honey, and yeast, with a small amount of acid or other enzymes to balance its sweetness. 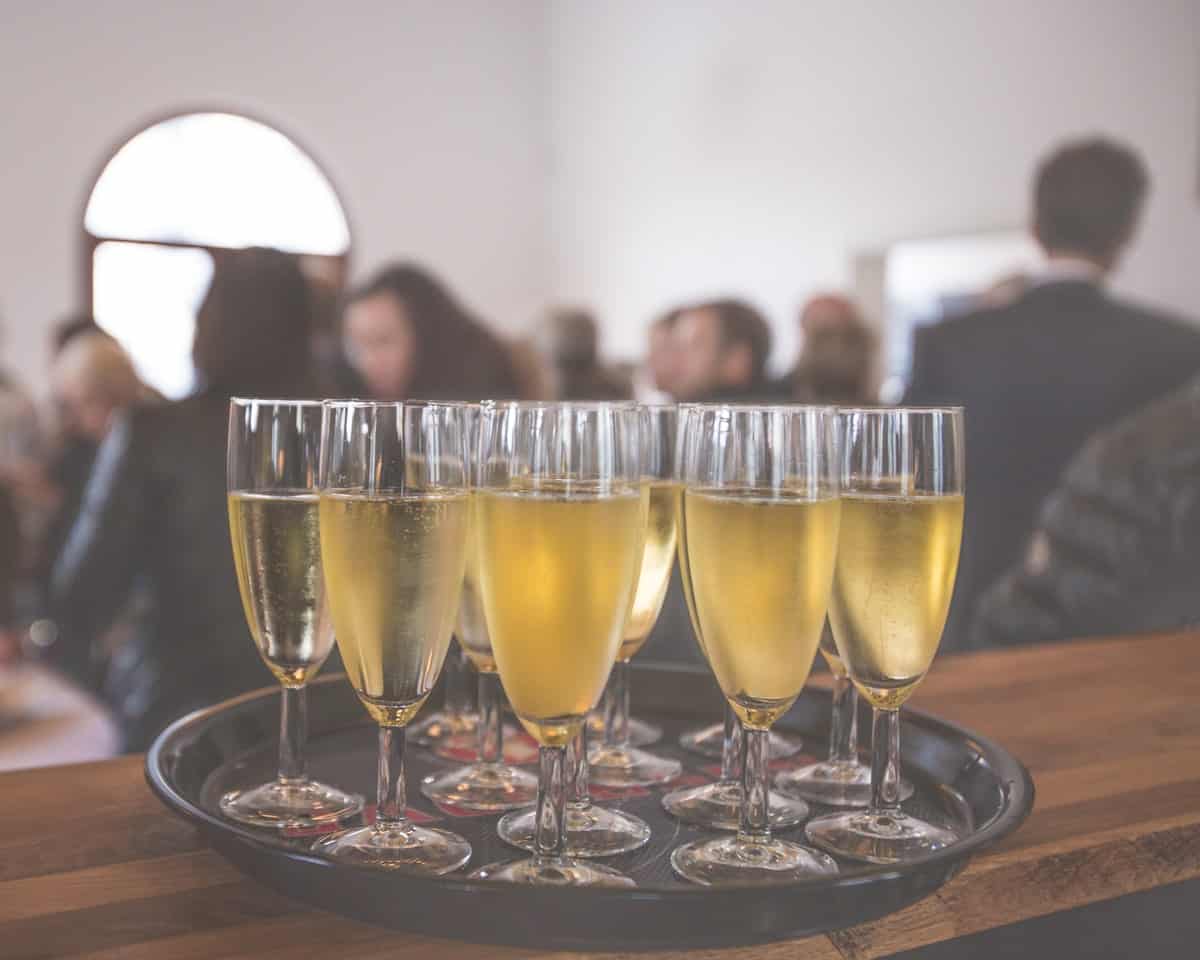 This mead is similar to sparkling wine and is carbonated. This mead has a small amount of extra honey or sugar placed into the mead just before it is bottled. This creates a secondary fermentation that gives an extra level of sweetness and effervescence to the mead.

This mead is white with the addition of fruit, herbs, and sometimes, even egg whites.

Variants of Meads Around the World

Not surprisingly, there is a large variety of meads around the world. Some of the more popular ones are listed below.

Acan is a Native Mexican variant of mead. 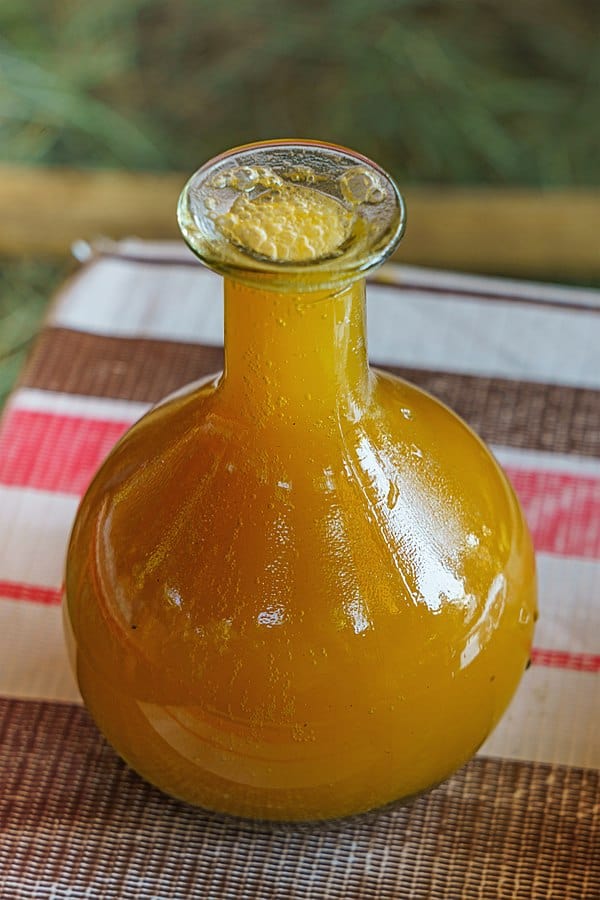 Ethiopian mead added with gesho, the shiny-leaf buckthorn, and fermented with wild yeast.

Also known as Suwa, this Eritrean and Ethiopian mead is made in the style of beer, but with the inclusion of honey.

The word “gverc” is derived from the German word for spices. This type of mead originated in Croatia and incorporates various spices into the drink.

A Croatian and Slovenian variety of mead.

A special type of mead made in Brittany, France.

Very sweet Polish mead made from one part honey and half part water.

Polish mead made from equal amounts of honey and water.

Polish mead from one part honey and three parts water. 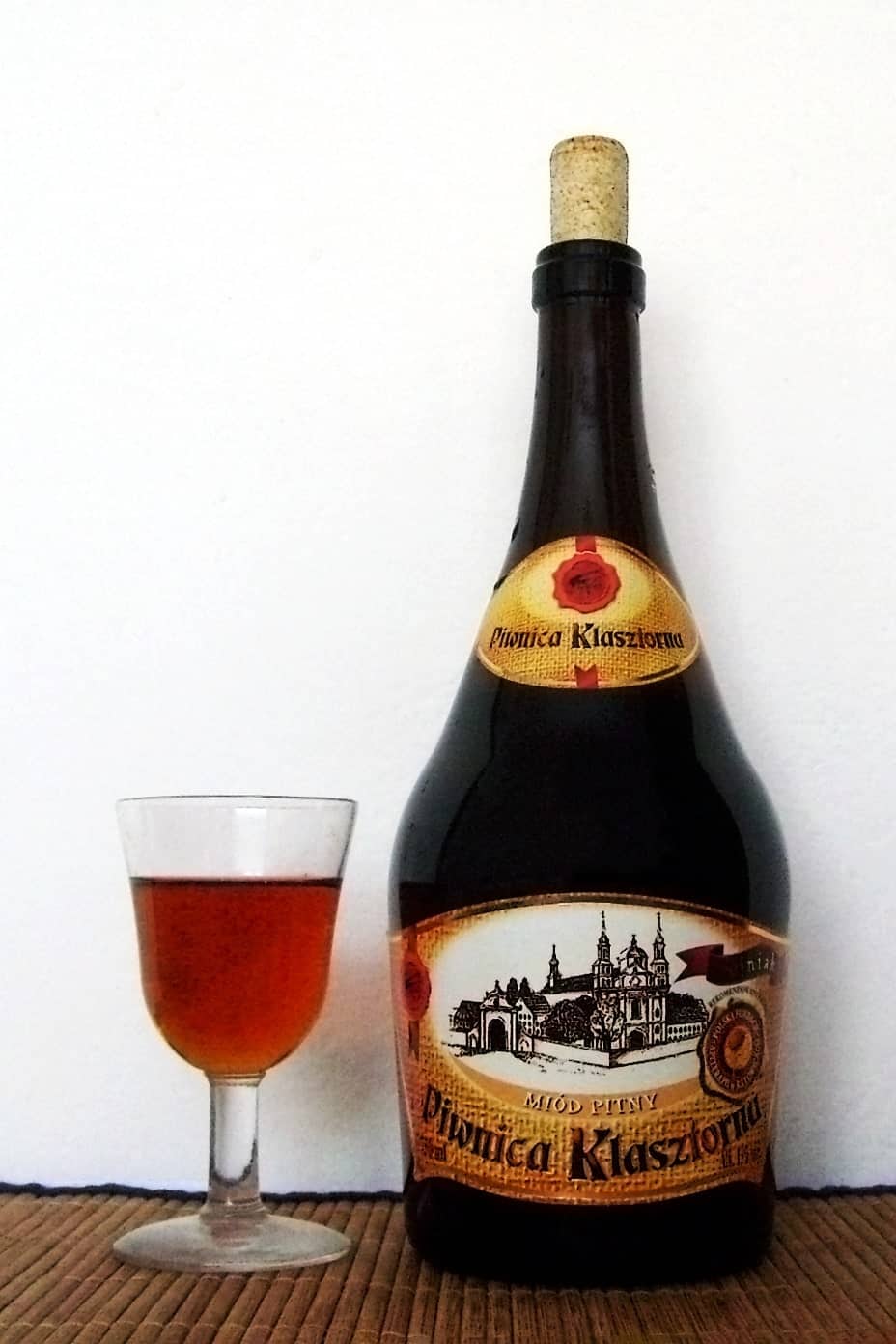 Polish mead made from one part honey and two parts water.

A type of Mayan mead made from wild honey, freshwater, and the bark of the balche tree.

A Finnish mead drink made with lemons and some sweeteners. This short mead takes just 2 days to a week to make and is very effervescent, sweet, and delicious, with barely any alcohol content.

This mead is made and commercially available in Bosnia, Bulgaria, the Czech Republic, Croatian, Serbia, Slovakia, and Montenegro.

This delicious Lithuanian mead is made from natural berry honey and berry juices and is infused with acorns, poplar buds, carnation flowers, juniper berries, and other herbs. Its alcohol content can go up to a whopping 75 percent.

See also  How to Clean a Guava

A type of Nepalese mead seasoned with Himalayan spices and herbs. It has been manufactured since 1972 in Pokhara city.

What Mead Should Wine Drinkers Start With?

If you are a wine connoisseur, drinking your first glass of mead can be a strange experience since meads can have several versatile characteristics. Hence, the best bet for wine drinkers is to start with a pyment.

As mentioned above, meads come in an almost inexhaustible variety and this makes it harder to understand which mead would be the best based on its types. It is a good idea to try out a wide variety of mead to see what kind of flavors, alcohol levels, and colors you like the best. Many small breweries offer artisan-style meads with their unique twists and you can keep an eye out for them.