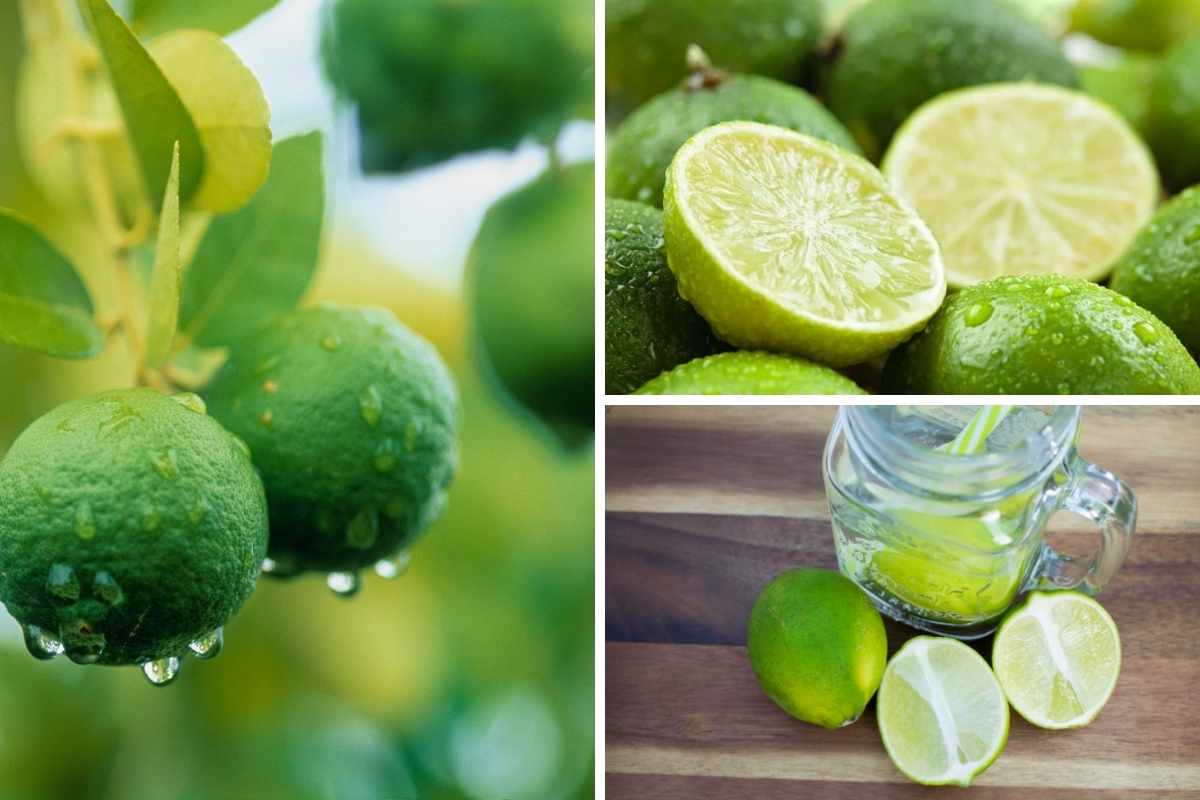 Limes are hybrid citrus fruits and evergreen plants that originated from Southeast Asia but can now be found in tropical and subtropical areas around the world.

Arab traders brought lime trees to Egypt and Northern Africa around the 10th century while the Crusaders introduced limes in the 12th and 13th centuries to the Mediterranean countries. Limes are also perennial plants that can last more than 10 years.

India is the world’s top producer of limes followed by Mexico and China. 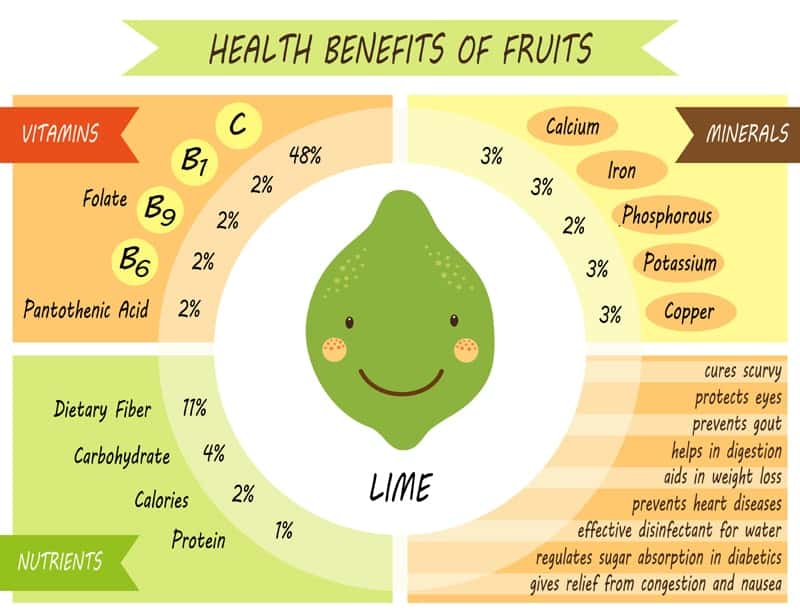 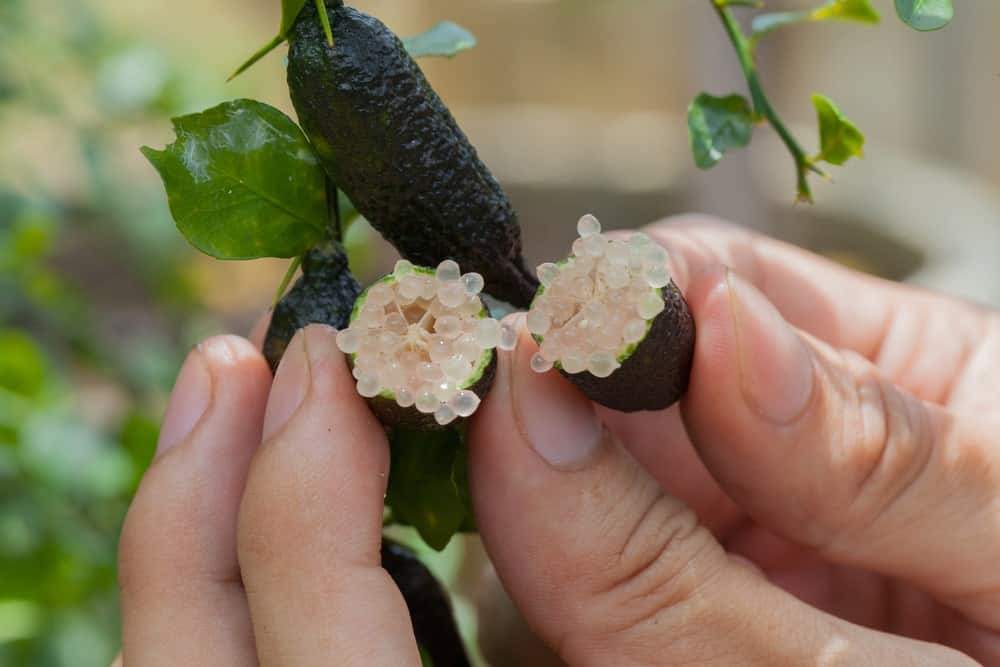 Also called the Citrus glauca, this is one of the smallest limes you can buy; in fact, it is almost a miniature fruit, with a size not much larger than a marble.

It is called “bush food” and is included as an ingredient in dozens of commercial products, including glazed fruit and different types of marmalade. 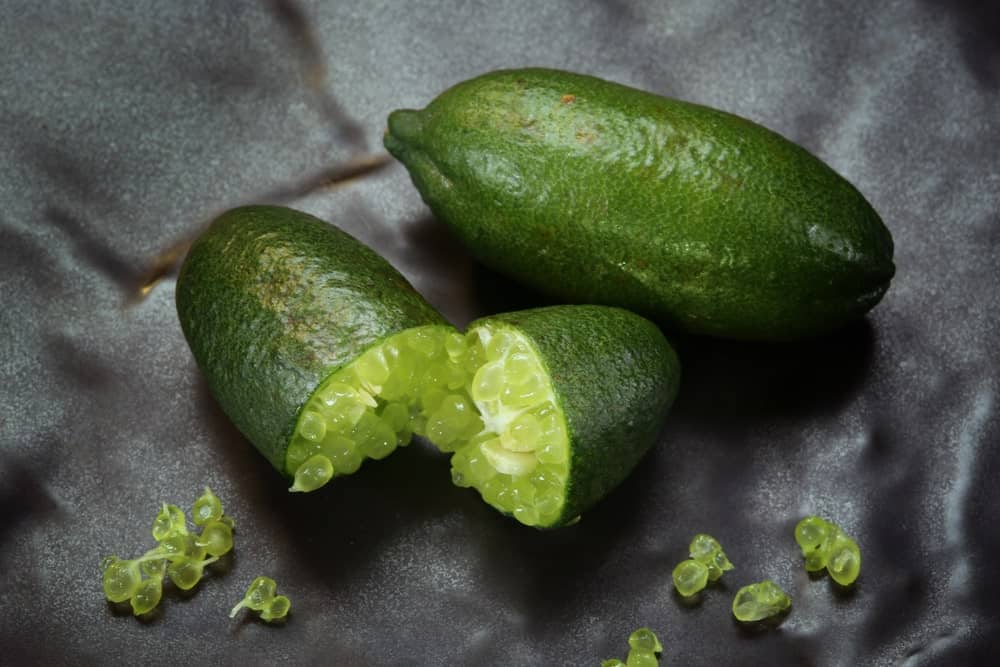 Australian finger limes are also called the “caviar of the citrus,” mainly due to its caviar-like texture and its popularity.

Found mostly in the rainforests of New South Wales and South East Queensland, it has a robust lemon-lime flavor and herbaceous undertones, which is why it does so well with both savory and sweet dishes.

Finger limes can also be used as a garnish for foods such as sushi, seared scallops, or oysters.

They are often found topping foods such as chicken and seafood, desserts such as cheesecake, and even in some mixed drinks. 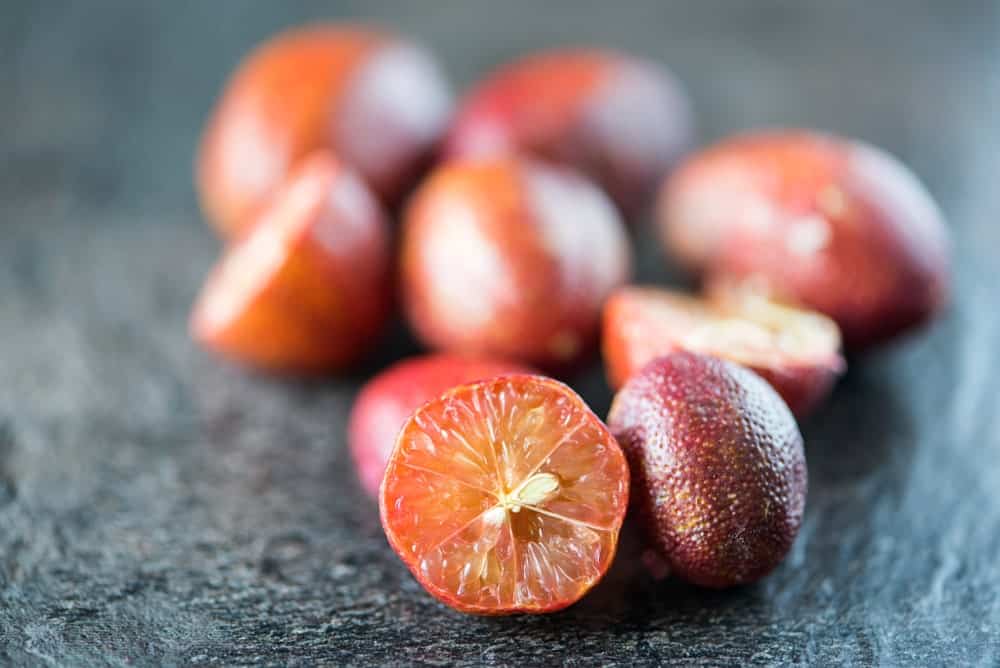 Blood limes are hybrids that were developed in Australia. The fruit is blood-red in color, and it is much smaller than other types of limes. It is a cross between the red finger lime and the Ellendale mandarin, the latter being a mandarin-orange hybrid.

It also has a somewhat sweet taste.

With smooth skin and firm, yellow flesh, ginger limes have about a dozen seeds in them and a thick rind. It is more similar in appearance to a lemon than lime, and many people consider its odor to be like that of ginger, hence its name. It is also called the Ada Jamir. 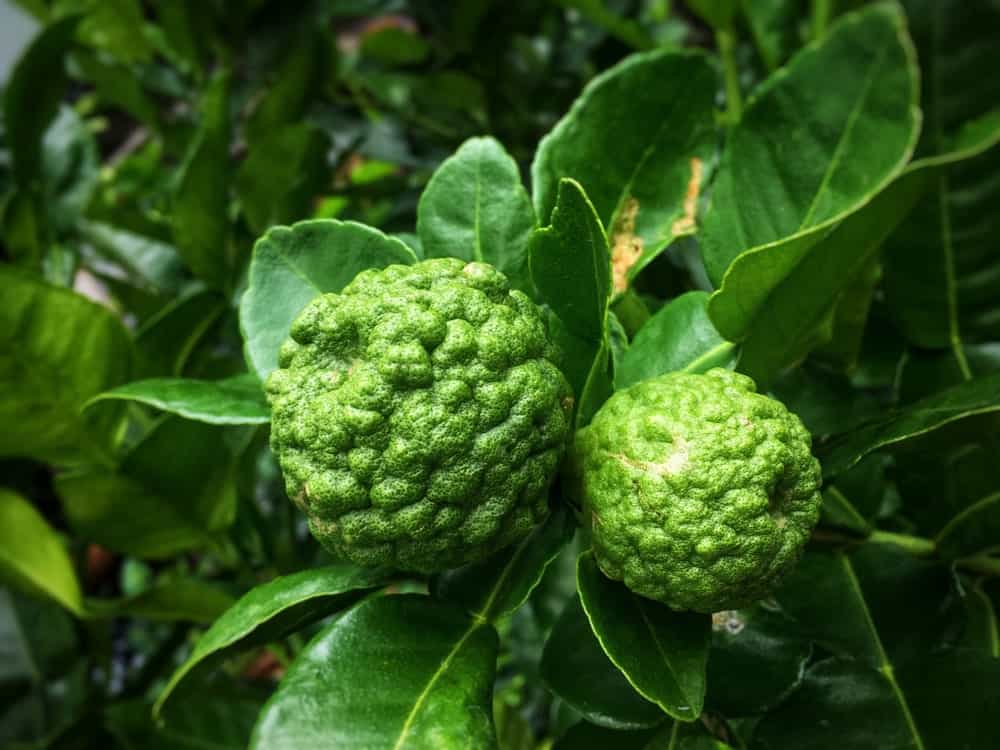 These limes are bumpy and round, and there is very little juice in them. In fact, what little juice they do have is quite bitter, and, therefore, they are mostly used for their zest in certain Southeast Asian dishes and for the fragrant oils found in their leaves. 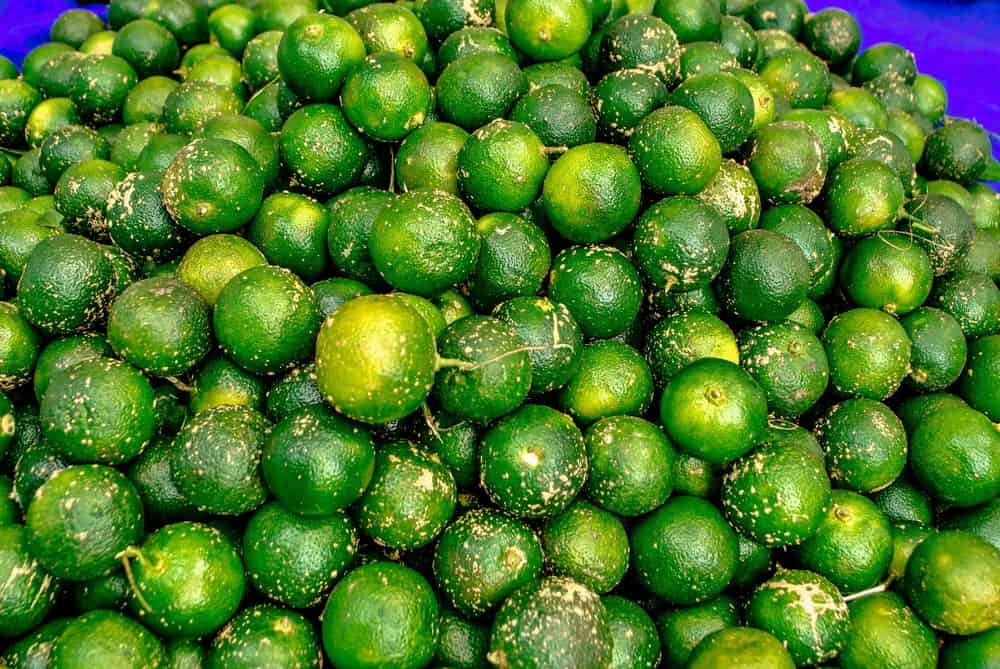 Also known as Calamondin or Musk limes, the Kalamansi lime is very tart and used in a lot of Philippine cuisines. It is orange in color and very small, only about one-inch in diameter.

The skin on this lime is very thin, so it doesn’t transport or store very well, and it also takes almost a full year to ripen fully.

The latter is one of the reasons why these limes are usually grown as an ornamental, including both Bonsai and full-size trees, instead of being used as food. 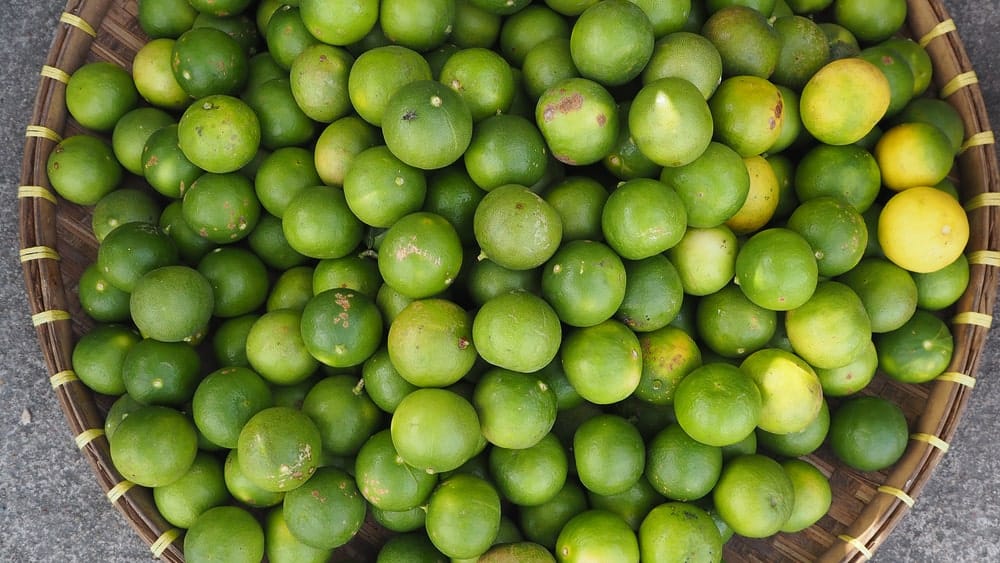 Also called Mexican limes, these limes are rounder, smaller, and more yellow in color than most other types of limes, and they have a very high acid content.

Used mostly as an ingredient in the Key lime pie, the majority of them are now grown outside of the United States, mostly for juice or juice concentrate.

Kusaie limes are thought to be a form of the Mandarin lime and likely originated in India. It is an oval-shaped lime with a base that is faintly necked and a nipple that is slightly pointed.

The thick, deep-yellow rind is easy to peel off, has some seeds, and even though it is not acidic in taste, these limes do not have a very rich flavor.

The juice is transparent and without color, and is one of the most cold-tolerant limes available. 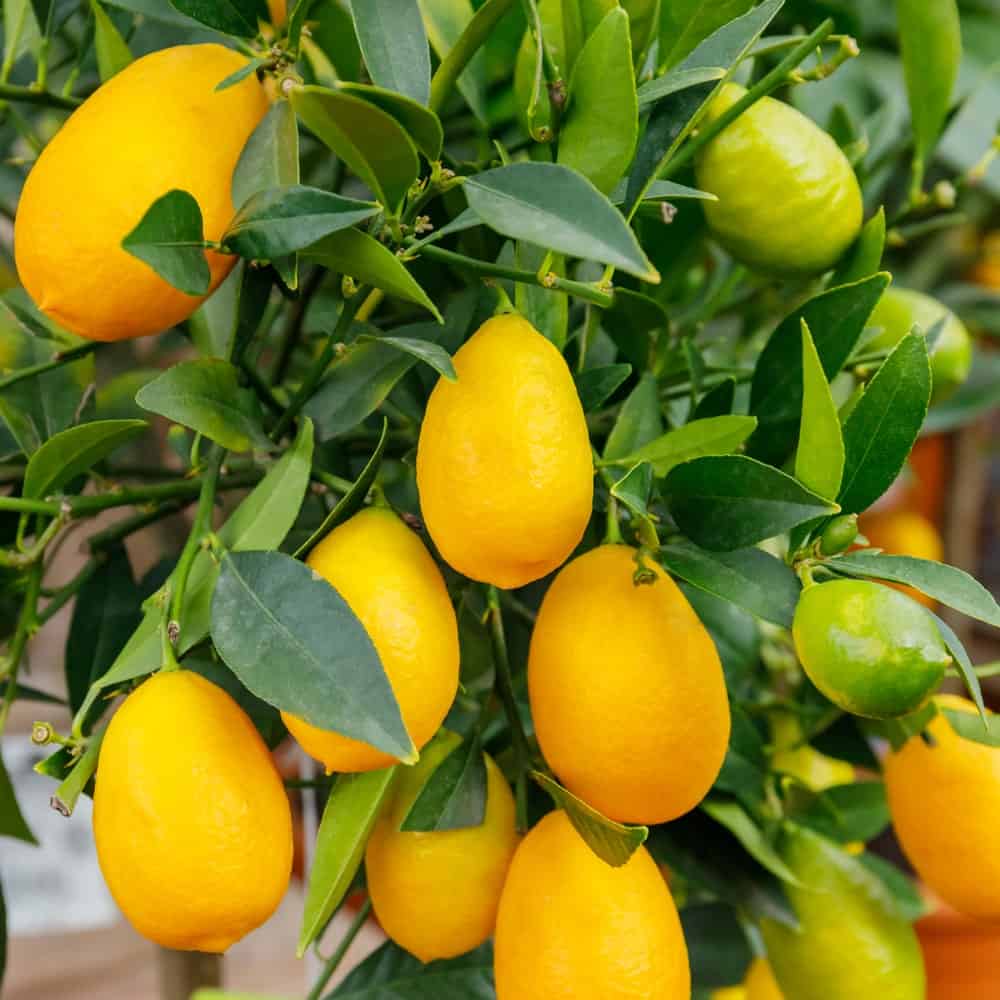 These are a cross between limes and kumquats. They are small and round, with a yellowish color and a very acidic flavor.

The limetta is thought to be a hybrid between a sweet lemon and a Mexican lime and believed to be native to India.

It arrived in the United States in 1904 and is mostly cultivated in areas such as northern Vietnam, the Mediterranean coast, and Egypt. There is also some cultivation in California. 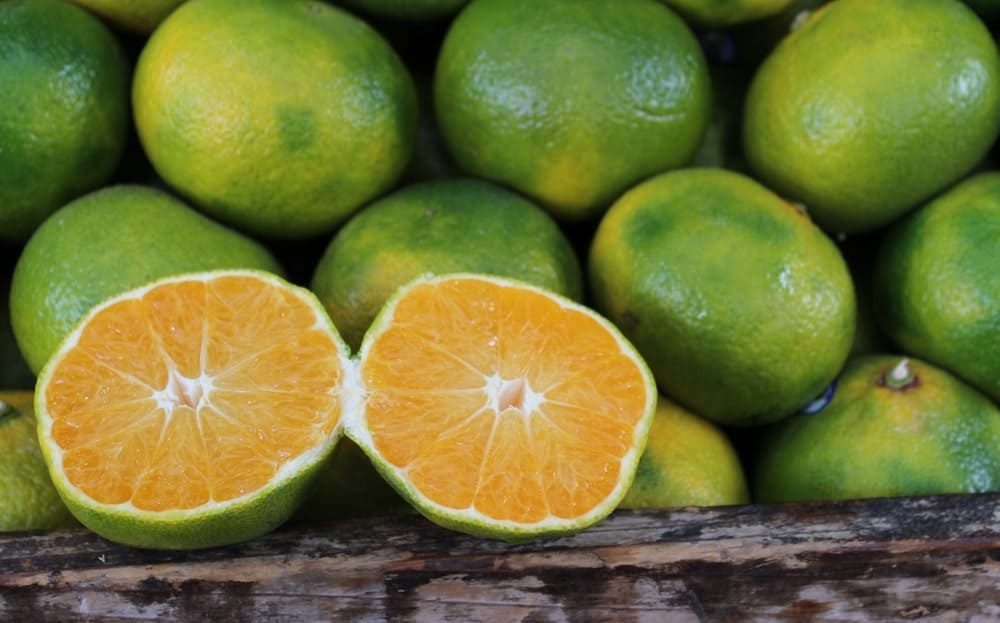 These limes are actually a group of three very similar limes. They include the Rangpur lime, the Kusaie lime, and the Otaheite lime. Although the origin of these limes is unknown, it has been available in the Western world since the early 1800s.

Originating from Mexico, Mary Ellen sweet limes are medium in size and either round or oval in shape. They start out the pale green in color but turn a pale yellow when ripe. What makes this type of lime so popular is the fact that they have little to no acidity and, therefore, taste great.

Merdeka limes are a hybrid that has only been around since 2010. They are a cross between the Kaffir lime and the Kalamansi lime, and they are very fragrant as well. The pulp is fairly firm and has a slightly bitter taste, and it is usually either seedless or has very few seeds in it.

With a strong citrus aroma, Merdeka limes are glossy and can easily be made into a tea if you first crush it and store it in an airtight container.

They also have unusually high antioxidant properties, much more than most other types of limes, which may be because of the two limes that are used when they are cultivated.

The Millsweet limetta came to the United States in the 1940s and is low in acidic content and very sweet. It is a productive plant all year long, but the main flowering season is in the Spring. 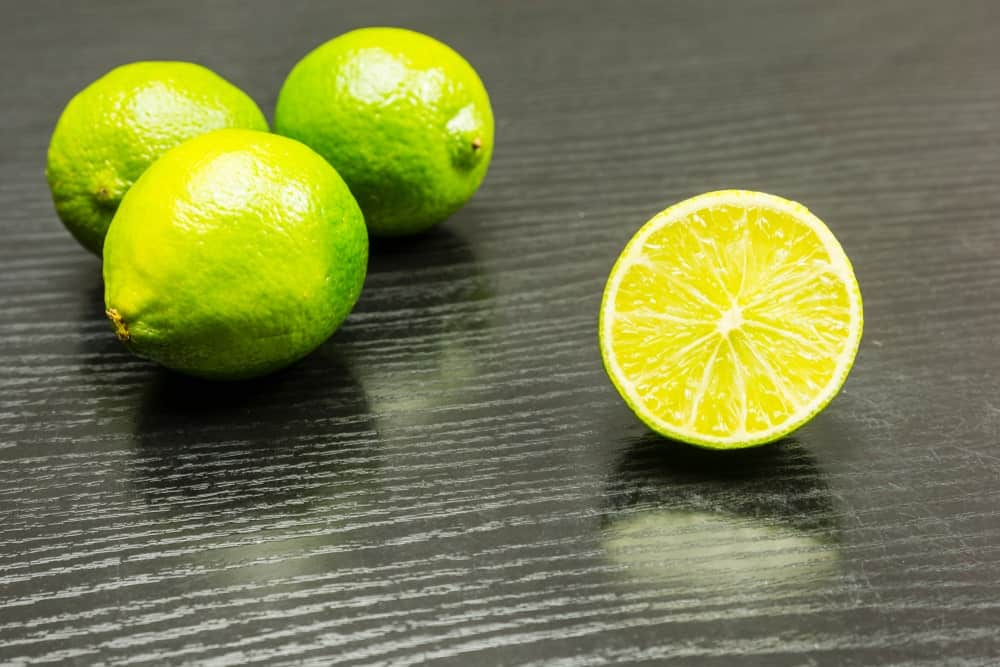 Omani limes are very small but have a strong aroma and a strong flavor. Originating in the Middle Eastern country of Oman, it is usually not used like other limes are because it isn’t as sweet.

However, Omani limes are used for two main purposes: it is boiled in saltwater, dried, then used as a spice; and it can be brewed into a strongly flavored tea when you use the dried peel. 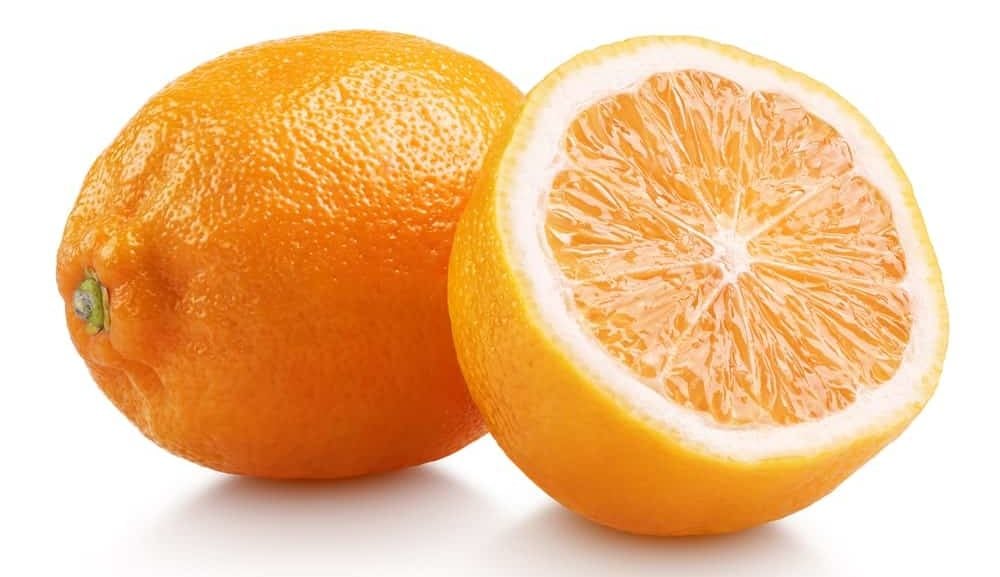 These types of limes are very tart and acidic, but also very juicy. They also do not look like limes, but rather, they resemble tangerines or oranges. Most experts think they are a cross between a mandarin orange and a lemon, but they are classified as limes because that is what they smell like. 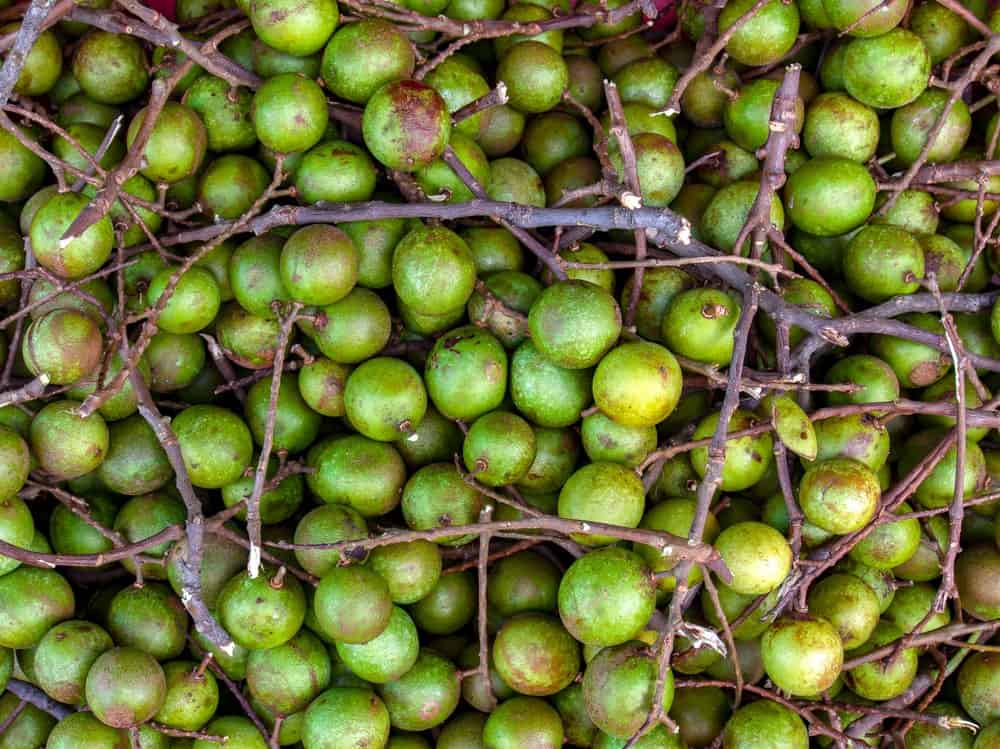 Spanish limes have many other names, depending on where they come from. They are not actually citrus fruits, but they are part of the soapberry family. The lychee is a cousin of the Spanish lime, and the pulp is gel-like and shiny.

Spanish limes can come in a variety of colors, from pale yellow to salmon-orange, and there is sometimes one or two large white seeds in the very center.

While they can be sour in taste, they are usually sweet and acidic when ripe, and even the seeds can be roasted and eaten, making them a very versatile fruit. 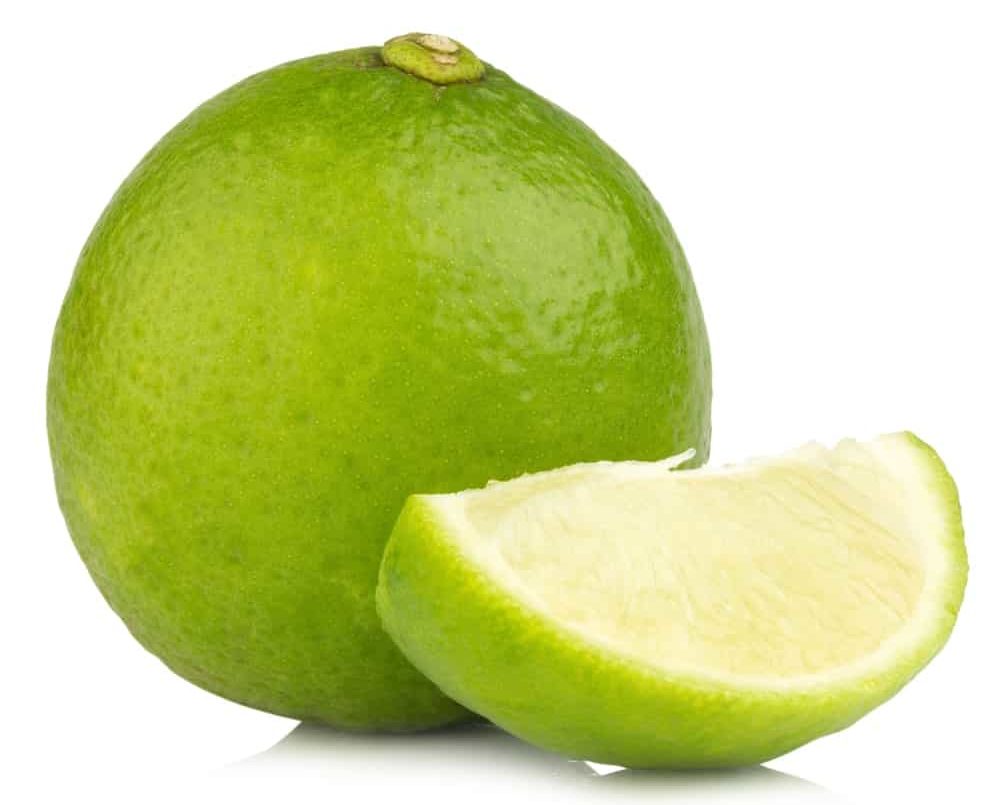 If you buy your limes in a supermarket, they are most likely Tahiti limes, as they belong to a strain that is believed to have originated on the island of Tahiti.

There are two main varieties of Tahiti limes: Persian limes, which are grown in Florida and are egg-sized and oval in shape; and the Bearss lime, which is grown in California and is small and seedless.

Both of these limes mature a yellow-green color but are usually sold earlier when they are deep green in color because the taste is better then. 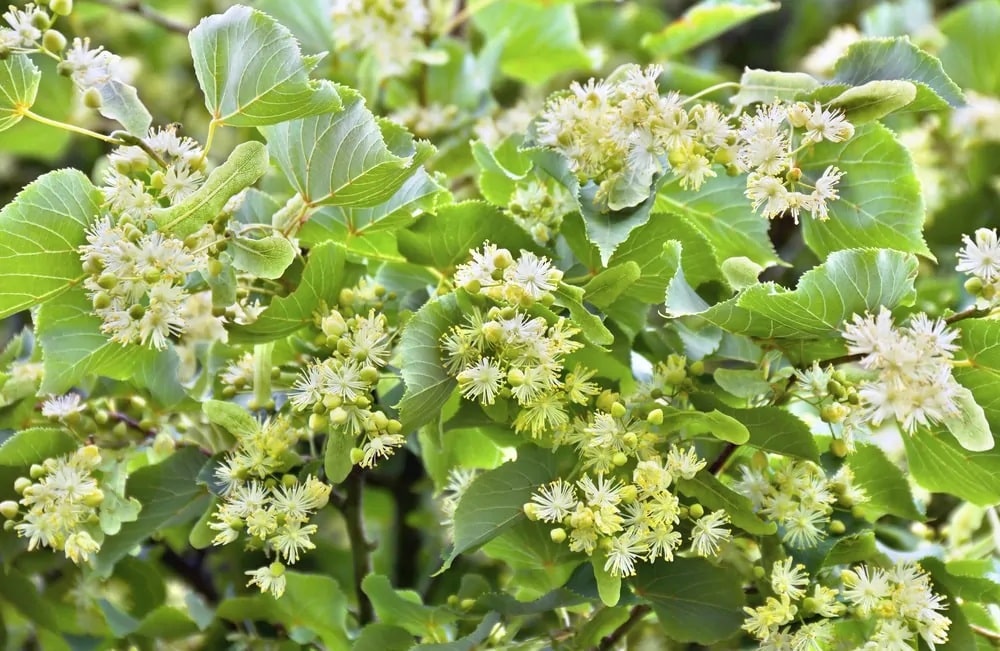 If you ever hear of wild lime, do not think of it as something you can cook with, because it is not even citrus fruit. Instead, it is a flowering shrub that is cultivated both indoors and outdoors and most commonly used as a houseplant.

Also called Black Twig limes, these limes have deep violet-black twigs, hence their name and they have a pleasant lime flavor which makes them easy to eat fresh.

Winged limes are roughly three inches in diameter and contain a lot of sugar, making them a delicious alternative to other types of limes.

How much juice is in a lime?

We answer it in our “how much juice is in a lime” article.

The lime is actually a hybrid fruit, and although the precise origin is unknown, it is thought that limes came from either Southeast Asia or Indonesia.

Contrary to what many people think, limes have much more acid and sugar than lemons do.

Where They Come From?

The top three lime-producing countries are India, Mexico, and China, in that order.

Despite what a lot of people believe, limes are not always green. In fact, they range in color from light yellow to orange and different shades of green. There are even limes in darker colors such as blood red and maroon.

More Than Just a Food

Limes are good for more than just eating, as the juice is often used in products such as cleaning products, aromatherapy items, and even perfumes.

Home Expert (Bot)
Hello, how are you? Ask me anything about interior design, home improvement, home decor, real estate, gardening and furniture.
77 shares