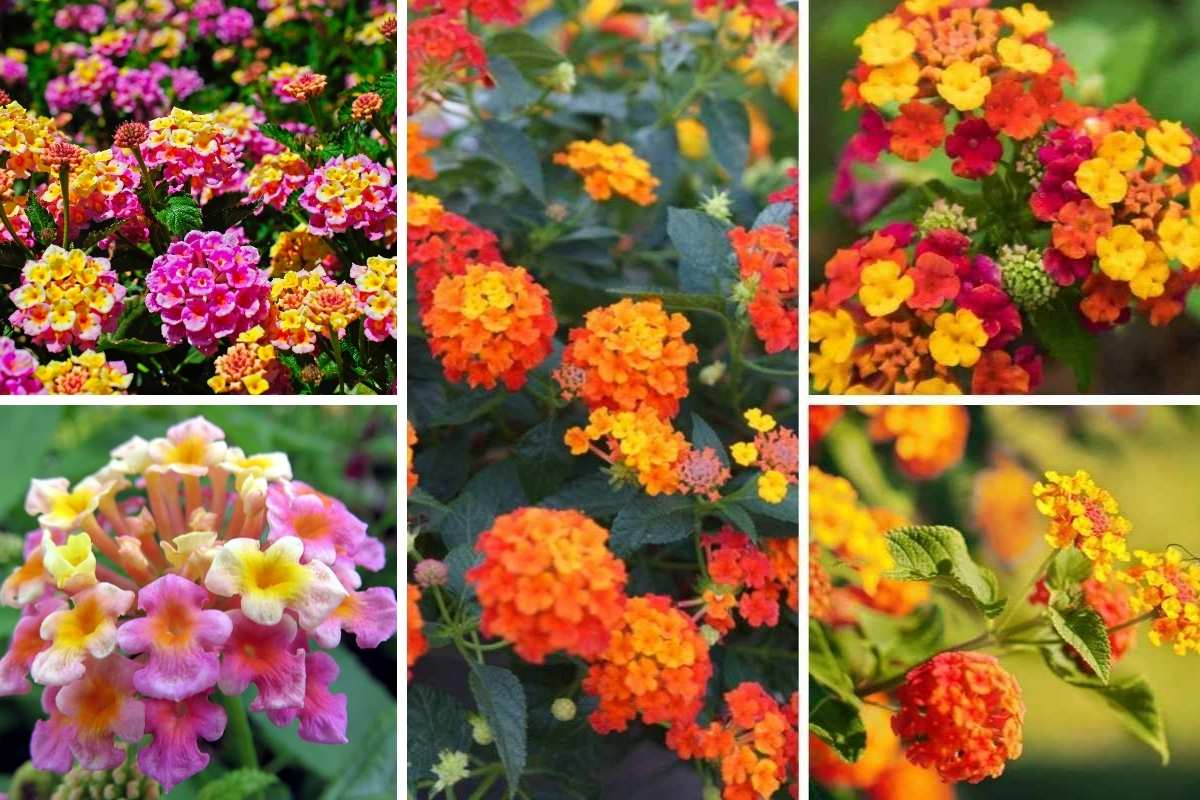 Are you looking for something that will add a pop of color to your garden? A natural embellishment for your place that will impress the guests at the upcoming summer parties? Whether you are searching for some floral beauties or just looking for the next best plant to nurture in your garden, look no further than lantanas.

These bright and radiant blossoms that usually feature an orderly tie-and–dye effect on the flower heads are a truly exclusive gift of nature. Not only are they easy to look after, but these aromatic flowers are also resistant to most of the common garden pests and diseases. They are pollinator heaven, attracting a swarm of butterflies, bees as well as hummingbirds.

Plus, they change color as they mature, bringing your garden to life in every possible sense. Read on to find the different types of lantanas that you can grow this season.

What are Lantana Flowers?

Lantanas are a genus of over 150 types of flowering plants that all belong to Verbenaceae, a family of verbena species. Lantanas are perennial and include both herbaceous plants as well as shrubs that can grow up to 6 feet tall. Originating from tropical American and African regions, lantanas are a hardy species that can thrive sufficiently well in different weather conditions. 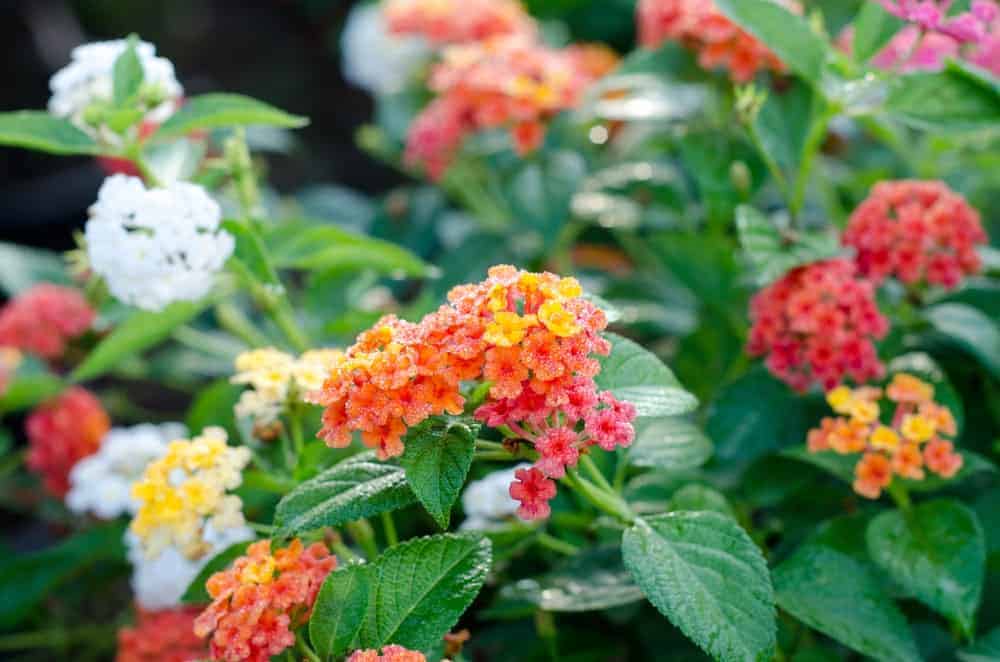 If you are a novice gardener or someone who is planning to grow lantanas this spring, then let’s clear the confusion between lantana and verbena before proceeding. Lantana and verbena both refer to a species of colorful flowering plants that belong to the Verbenaceae family. They both look so similar that even skilled gardeners can have a tough time setting them apart.

Both varieties are used for various purposes such as groundcover, borders, ornamental plant and so on. Although the two varieties produce equally beautiful blooms, they have different hardiness level, growth habits, and maintenance needs. So, before you dig in to plant one, make sure you are well informed about its variety so that you can care for it accordingly.

Types of Lantana According to Growth Size 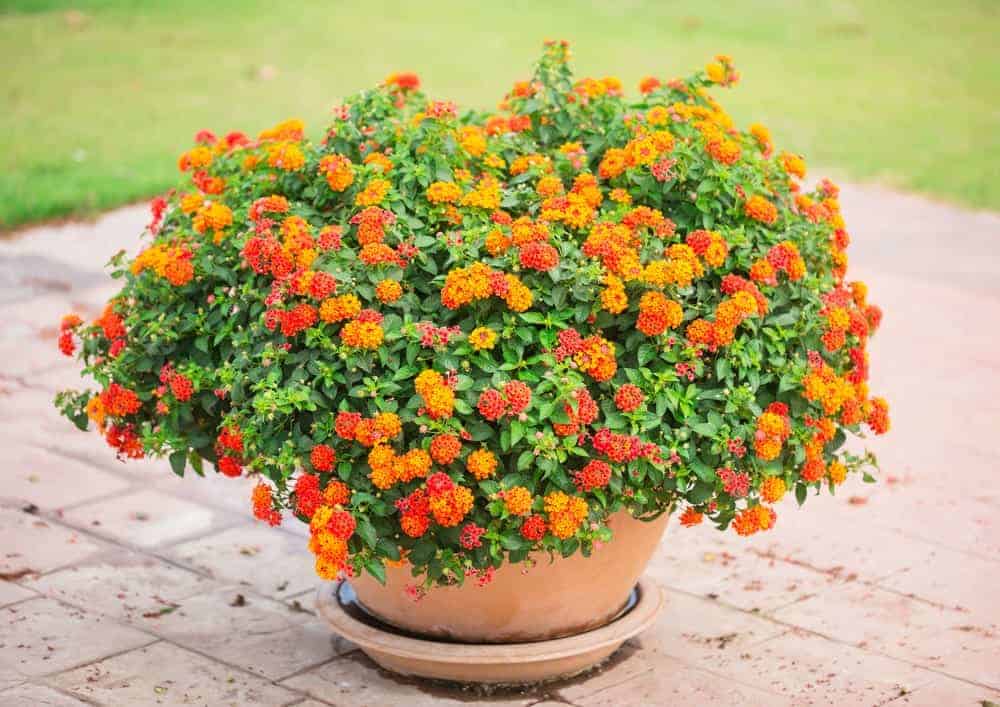 Lantana Camara refers to the species of the Verbena family that grows in small, upright shrubs reaching a height of up to 6 feet. Native to American tropics, this species is not easily available in most nurseries, but you can find various other lantana varieties that have been derived from the original Camara or share ancestry with the plant. Therefore, the term Lantana Camara is often used interchangeably for other species of lantana that grow in bushes.

This plant varietal is known for its rapid growth which is both a good a bad thing. You can expect a sapling to grow over 5 feet tall within one season, but at the same time, this also means that you need to trim it every now and then so that it looks prim and proper. If you choose to grow lantana camara on farmland, then note that it will require hard pruning because if left unchecked, this type of lantana can invade agricultural areas and harm livestock due to its toxicity.

Failing to remove the old stems from this will turn the bush into a woody shrub that doesn’t look very visually appealing. Although this type of lantana requires greater care and attention than other varieties, the rewards are worth it too. The plant abundantly produces gorgeous, flamboyant flowers that feature an array of vivacious colors such as deep red, bright yellow, vivid orange as well as coral pink.

Set against lush green leaves, these blooms are guaranteed to catch everyone’s attention from afar. 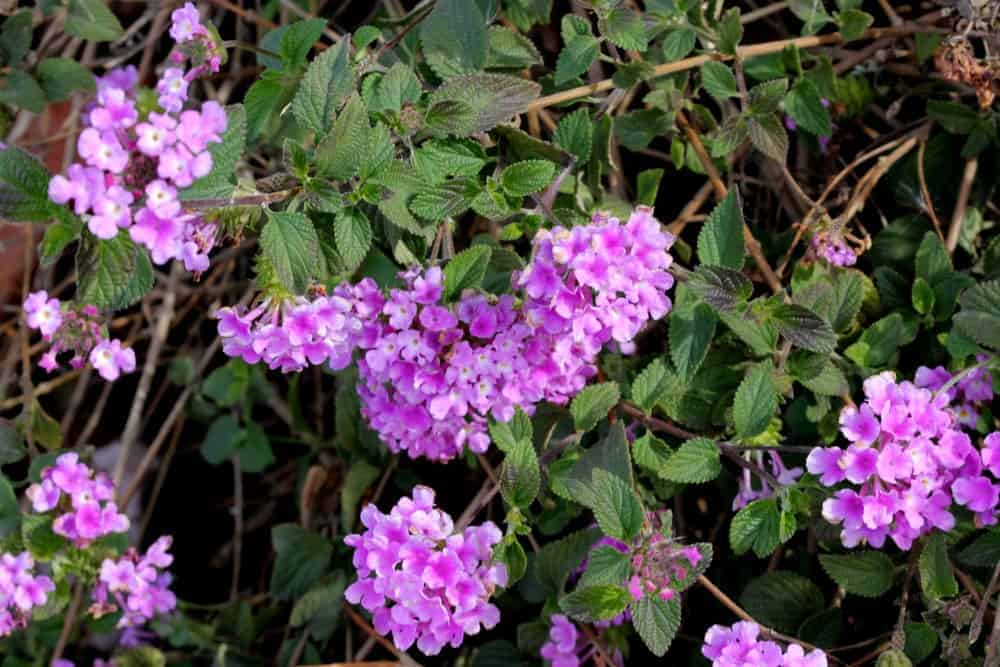 Lantana Motevidensis is more commonly known as trailing lantana and is a type of lantana that follows a ‘trailing’ growth pattern. It is a low-growing, spreading shrub that reaches a maximum height of 18 inches and a width of 5 to 10 feet. Unlike Lantana Camara, which includes a range of different colored flowers, the trailing lantana only includes purple flower heads that have a slight touch of white spots in the middle of each floret.

However, you might come across ‘yellow’ trailing lantanas that are actually a hybrid between Lantana Motevidensis and yellow Lantana Camara. If grown with support, the trailing lantana takes a climbing vine form whereas if you grow it without any support, it will make an ideal groundcover. It will look impressive if grown in wall-mounted boxes or any other container with a trailing accent.

Have you got a stone wall in your house? Are there some rocks in your garden or any other form of landscaping? If that’s an affirmative, then adorn it with trailing lantana for a truly majestic look. 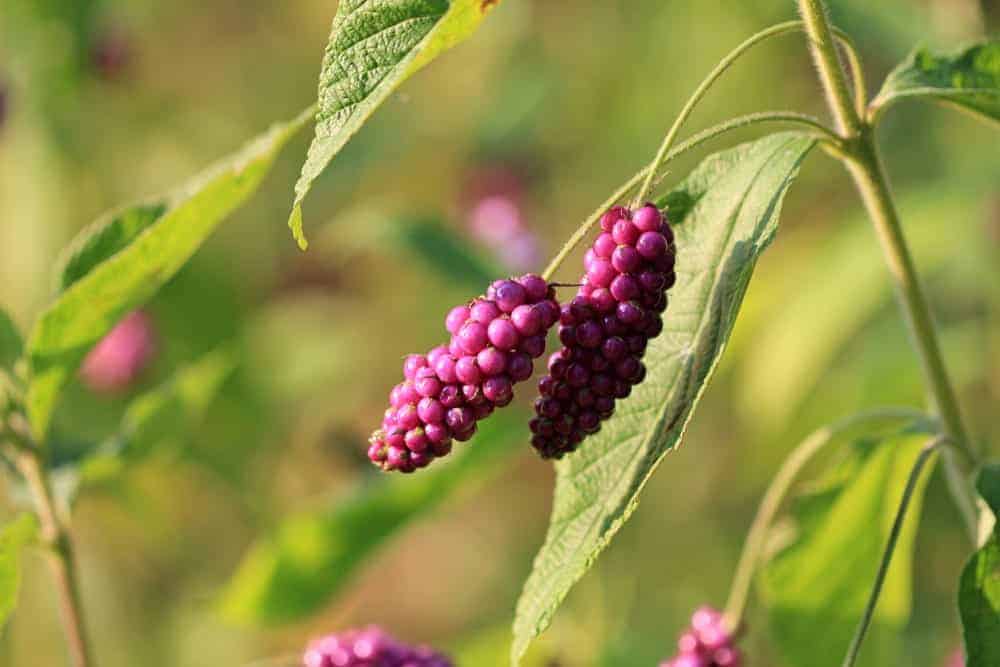 Popcorn Lantana is distinct from most of the other varieties because it instead of being cultivated for showy flowers; this type of lantanas is largely cultivated for its ornamental fruits. The plant can grow up to 3 feet high with a similar spread and is prized for the fruit clusters that it produces after the flowering season. It can further be divided into two varieties, Fruity Pebbles and Lavender Popcorn that feature bright pink and elongated purple fruits.

Popcorn lantana is native to Central and South America and therefore, thrives best in tropical or sub-tropical regions. It is also known as 3-leaved lantana because the leaves of this plant grow in groups of three. 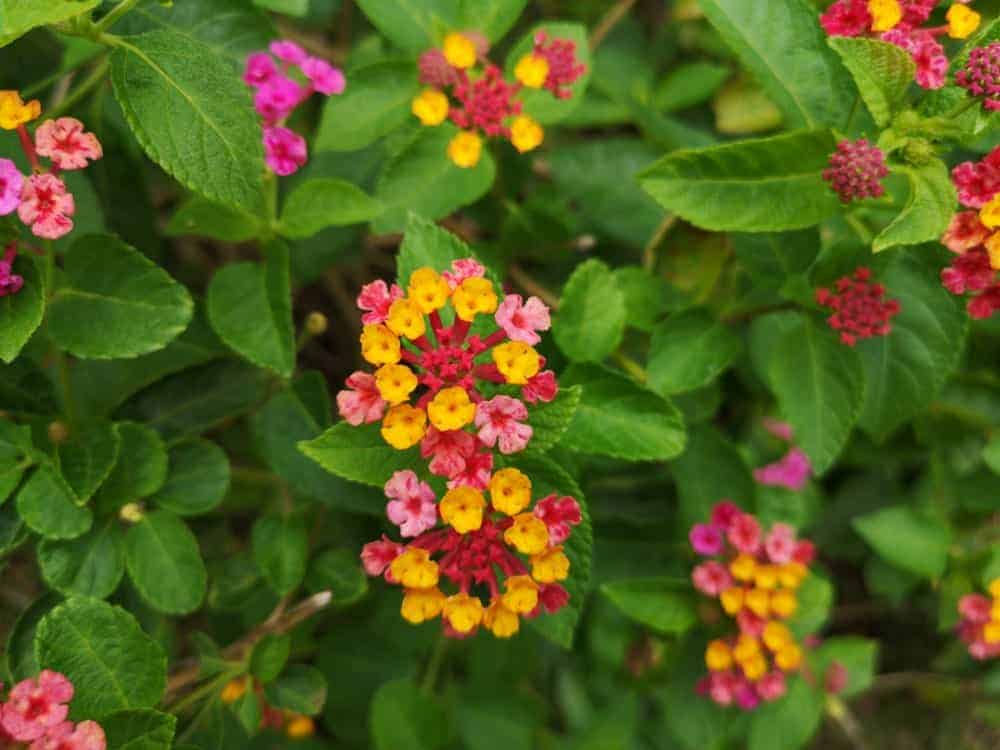 Lantana Horrida refers to a species of flowering plants that belong to the verbena family. The species got this name due to the fact that these lantanas produce a strong pungent smell that can affect people who are sensitive to scents. Lantana Horrida is well known in regions such as Mexico as well as in South America and the West Indies where it is commonly found in a variety of natural habitats including forests, grasslands, savannas, and even mountainous areas.

This type of lantana is cold hardy for most of the state, although it blooms excessively only during summer and fall. In Texas, it is usually sold as summer bedding because the plant reaches a height of about one foot when fully matured and produces vibrant flowers of red, orange, yellow, purple as well as white colors that look simply exquisite. Remember that the black or blue-black buds that appear in pre-flowering season are believed to be poisonous. 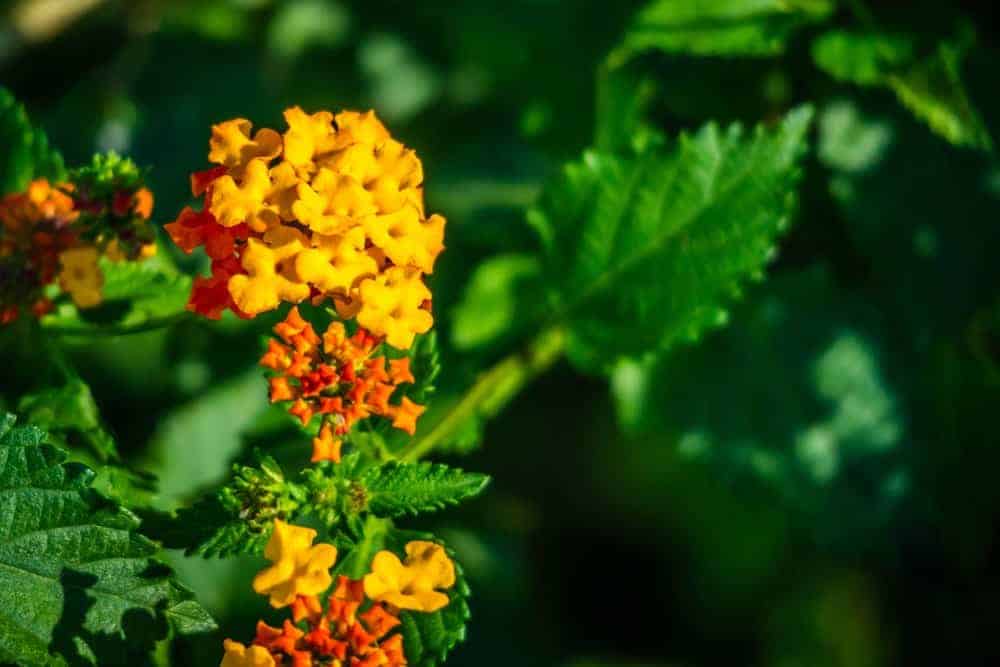 This type of lantana also goes by the names calico bush, West Indian shrub-verbena or Texas Lantana. Growing 3 to 5 feet high, this type of lantana is frequently spotted in various regions such as Mexico, Texas, Mississippi, Louisiana and other regions along the Gulf coast. This species of lantana is often confused with Lantana Horrida because its flowers are mostly of the same shades and also because it is found in regions similar to where Lantana Horrida grows.

However, unlike Horrida, which blooms in summer and fall, Lantana Urticoides blossoms from spring until the first frost. Starting from early April, the plant produces vibrant flowers of red, orange and yellow florets that are tubular in shape. The leaves are in pairs that grow in opposite directions, thereby making a perfect frame of lively greens around the equally lively blossoms.

This spreading shrub will look spectacular in any garden as its nettle-like growth of delicate flowers growth evokes elegance and style. However, Texas Lantana is quite notorious for being a pet poisonous plant. So, if you have any little buddies that tend to chew on your garden collection, it is better to consider other types of lantana as Texas Lantana’s foliage is slightly toxic. 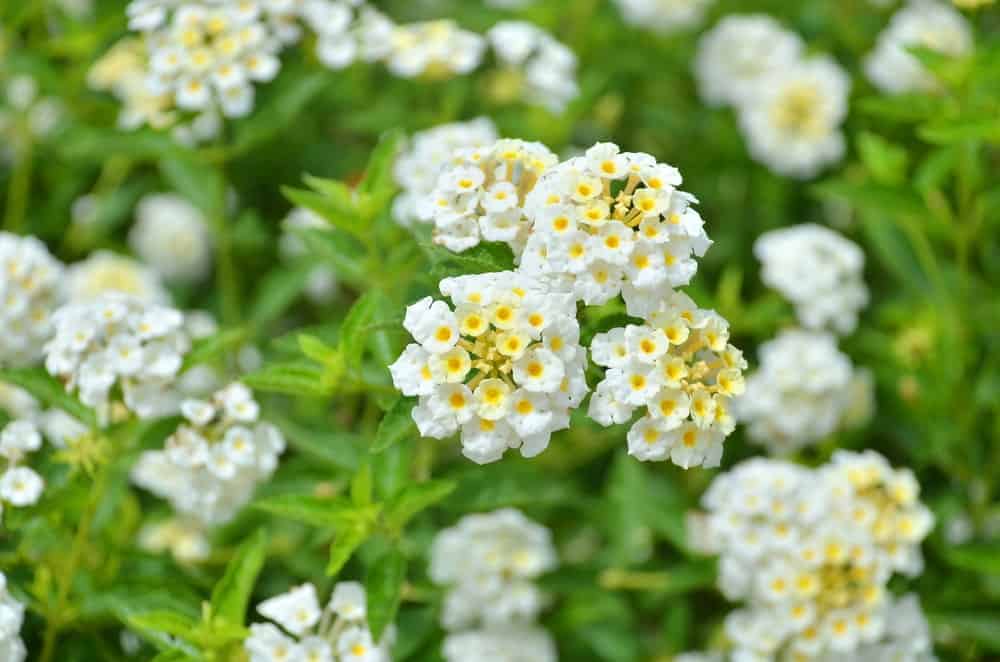 Commonly known as buttonsage, Lantana Involucrata refers to a type of Verbenaceae species that produces pristine white flowers composed of white florets with just a hint of golden-yellow in the center. Native to American tropics such as South Florida, the plant features a medium-sized shrub that reaches about 4 to 8 feet high and spreads as wide as it grows tall. It prefers soil that is rich in organic content but will also thrive well in relatively poor soil conditions.

Lantana Involucratas are often found in coastal regions as well as pine rocklands, but you can grow them on your own using seeds or simply buying a grown lantana plant from certain nurseries. This type of lantana is best suited for ornamental uses as its inflorescence flowers are not just showy but are also very fragrant. Lantana Involucrata is also called wild-sage because if you crush its leaves, they will smell like sage.

Whether you are looking for a hedge plant, a butterfly attractor or just a plant that can be the ‘wow’ factor in your garden, buttonsage lantana is your go-to option.

This flowering species in the verbena family is known to only the most passionate and dedicated gardeners because it is endemic to Ecuador. This means that Lantana Pastazensis is not only native to the Ecuadorian regions but also restricted to its original areas. Not much is known about this type of lantana because it is rarely found outside of its natural habitat in the lowland moist tropical forests.

If you are curious to find out more about this flowering shrub, it is probably best not to consider growing this plant. The use of lantana pastazensis in home gardens is highly limited and for the right reasons as well – it contains pentacyclic terpenoids that is toxic to humans.

Other Types of Lantana 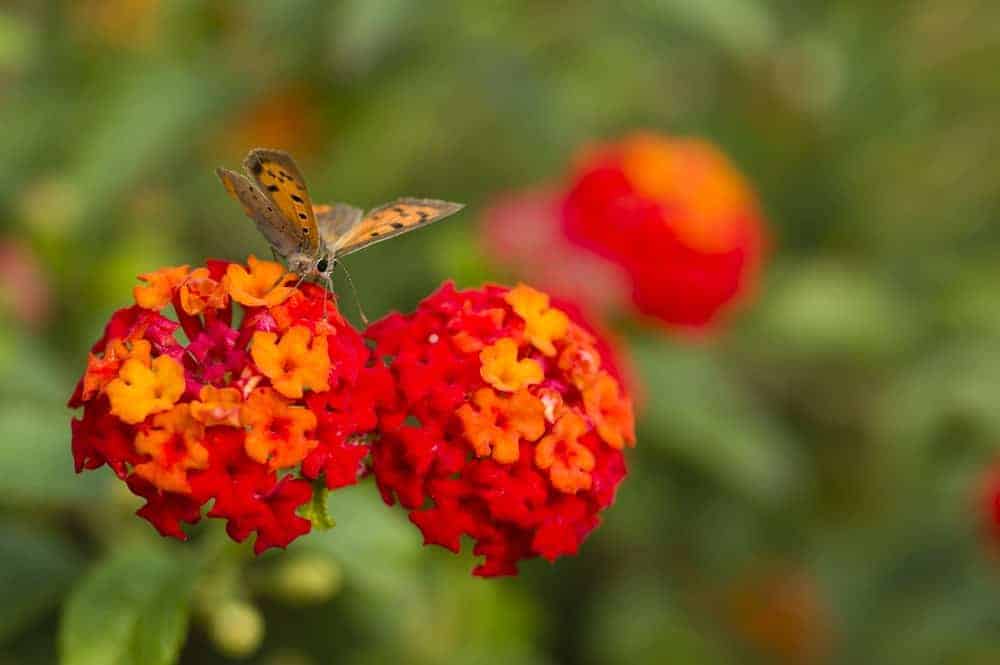 As you might have guessed from the name, this type of lantana comes in a color that closely resembles that of a cherry. The outer ring of cherry-red florets is filled usually filled with pink and orange (and sometimes also yellow) florets to make a truly vibrant round flower head that measures about 2 inches across. Bandana cherry lantanas look stunning when planted in large beds around a patio as well as a centerpiece in large glass containers. 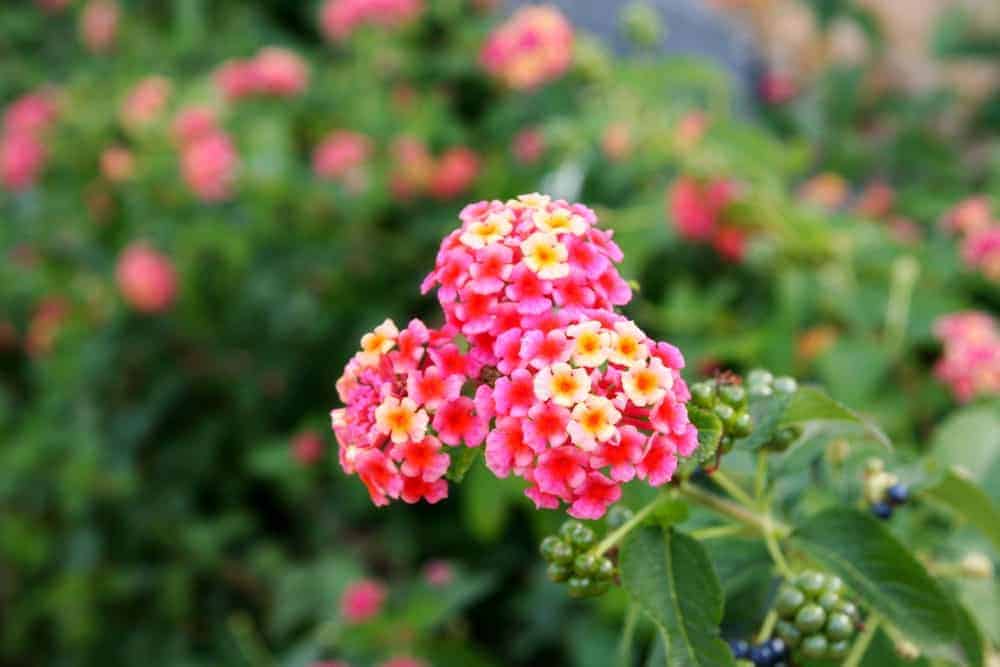 Whether you are a believer of ‘everything-looks-pretty-in-pink’ or not, you will surely agree that this type of lantana is without a doubt way beyond pretty in pink. Short and stout clusters of baby pink blooms that turn to dazzling rich pink hues will make a fine addition to any garden. 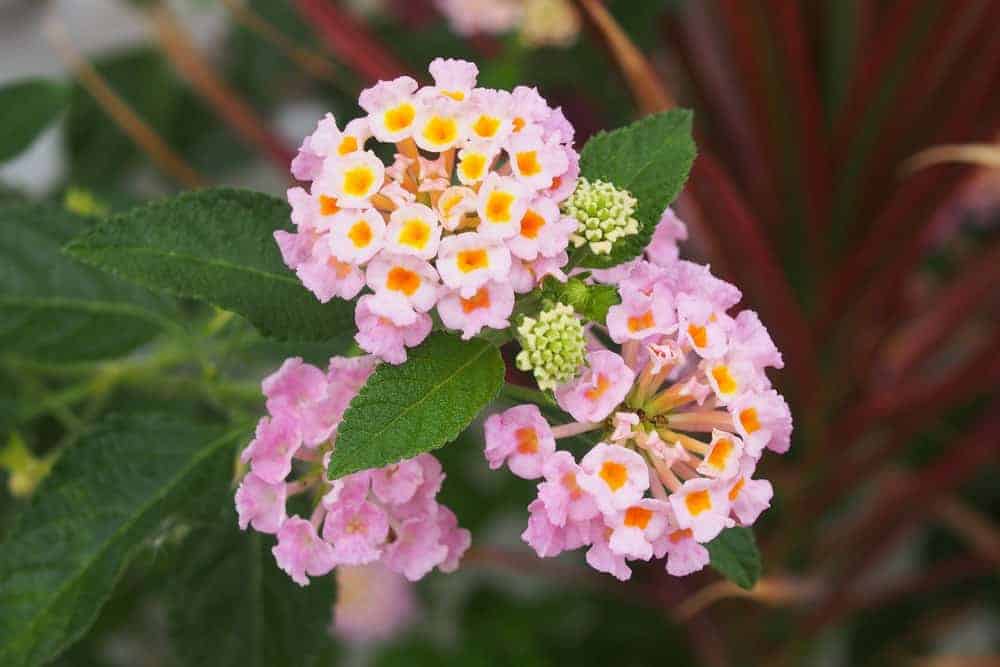 If bright pink doesn’t suit your style, then consider growing Pink Dawn Lantana that features a subtle touch of pink hues in its blooms. This type of lantana comprises of a compact, low-growing shrub that produces pale creamy yellow flowers. As they mature, the flowers develop a tint of light, pastel pink color that oozes beauty and grace. 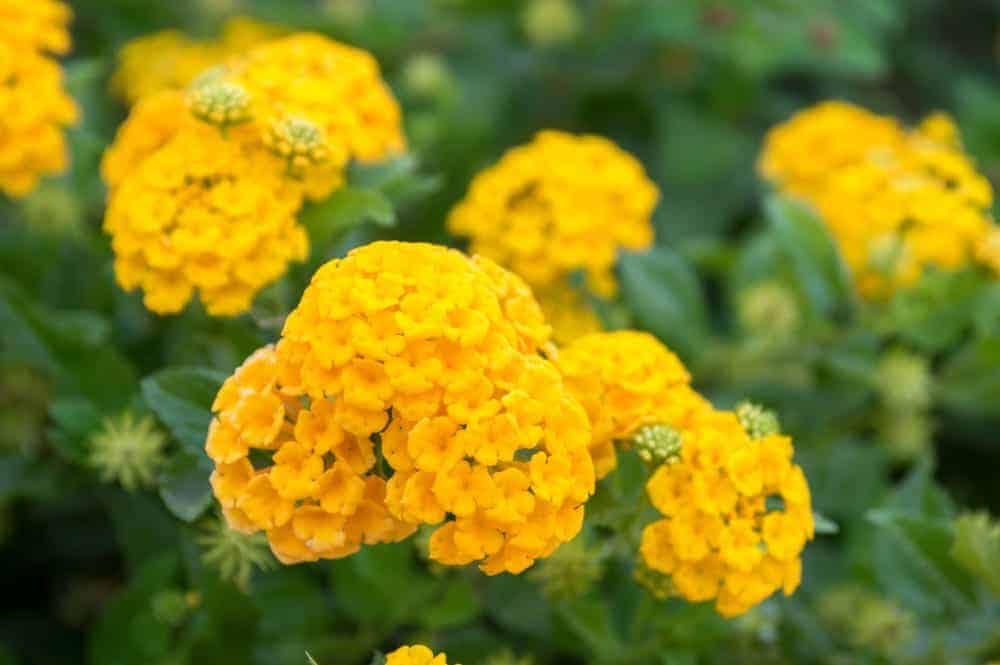 Nothing describes these lantanas better than their name itself. Featuring a bright and luminous yellow color, the Pot of Gold Lantana is one of the species that belong to the Lantana Camara family. Growing about 15 inches tall and 15 inches wide, this variety is truly different from the rest in the sense that while most lantanas comprise of florets of a different color that together form one flower head, the Pot of Gold lantana comprises of florets of only one color – yellow.

If you really want to capture the essence of summer by decorating your garden with the best blooms, then opt for Pot of Gold Lantanas. The plump blooms of yellow that contrast brightly against the greens will shine as brightly in your garden as the sun in a clear sky. These lantanas also look magnificent when grown in small baskets and pots alongside other varieties.

Aren’t these charmers simply to die for? So, which type of lantana are you going to grow?