Animate your water garden, pond, and even the aquarium with the different types of Koi fish that are distinguished on the basis of coloration, scales, and patterns. 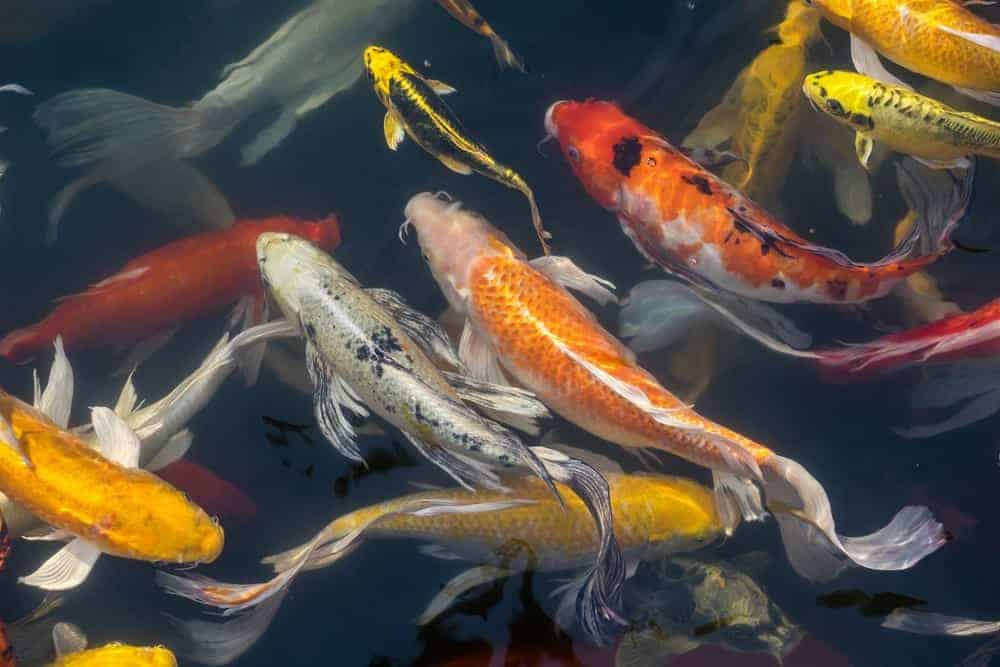 Koi fish are more commonly known as Nishikigoi or jinli, which literally means ‘brocaded carp.’ They are colored varieties of the fish species Cyprinus rubrofuscus. Koi fish are colorful fish which are commonly seen in outdoor water gardens and koi ponds.

Numerous varieties of koi fish have been identified by the Japanese. These varieties are distinguished on the basis of coloration, scales, and patterns. Koi fish are majorly found in white, red, black, blue, yellow, and cream colors.

It is believed that koi fish originated in China and were later used by the Japanese as a food source. It was in the mid-1800s that the Japanese started breeding these fish for their aesthetic appeal.

Koi fish are incredibly smart. They can be trained to eat from out of your mouth and hand. They are omnivores that feed on pond plants. Koi fish also live for a very long time. Their average lifespan is about 50 years, and they can grow to be 36 inches long.

More than 100 types of koi fish have been recognized till date. This species is one that you’ll see in a lot of aquariums, and for good reason. Their colors and patterns give life to any aquarium or pond that they are in. If you love these vibrantly colored fish, you may also want to know about the various types of koi fish out there. If so, then read ahead! 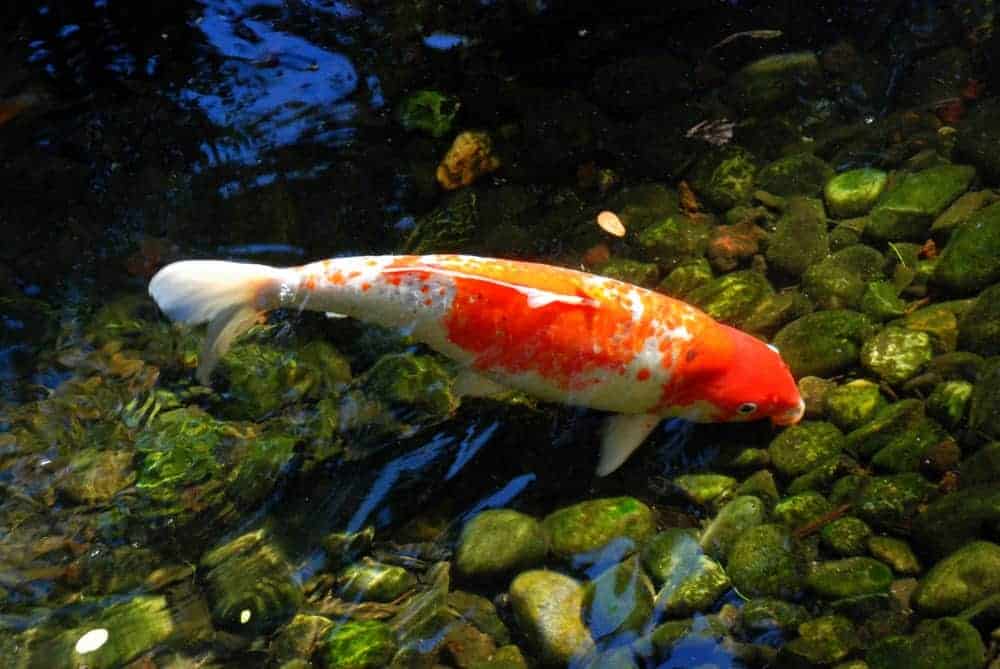 Kohaku is considered the king of all koi fish. This is the first variety of koi fish that developed with two colors. Its simple beauty and majestic look make it an automatic favorite for any aquarium or koi pond.

The Kohaku koi fish has a body that is a stunning white color (shiroji), with red blotches adding a bit of color to its otherwise uniform look. Most Kohaku fish have a yellowish nose. The red markings, that are traditionally called hi, are of two types. The first type is red that has a purple tint to it. These markings appear quite thick, but as the fish ages, the markings fade, resulting in the absence of crisp margins. This color is quite easy to maintain, so Kohaku fish with this type of marking is usually the best choice for inexperienced koi fish owners.

The second type of marking is more popular than the first one. It is orange-red in color but is a lot more difficult to maintain. These markings have a crisp margin that is quite visible between the white and red. Kohaku fish with orange-red markings are a preferred choice of people who are experienced with taking care of koi fish.

No matter what color or pattern a Kohaku comes in, this type of koi is a stunning addition to any aquarium or a pond. 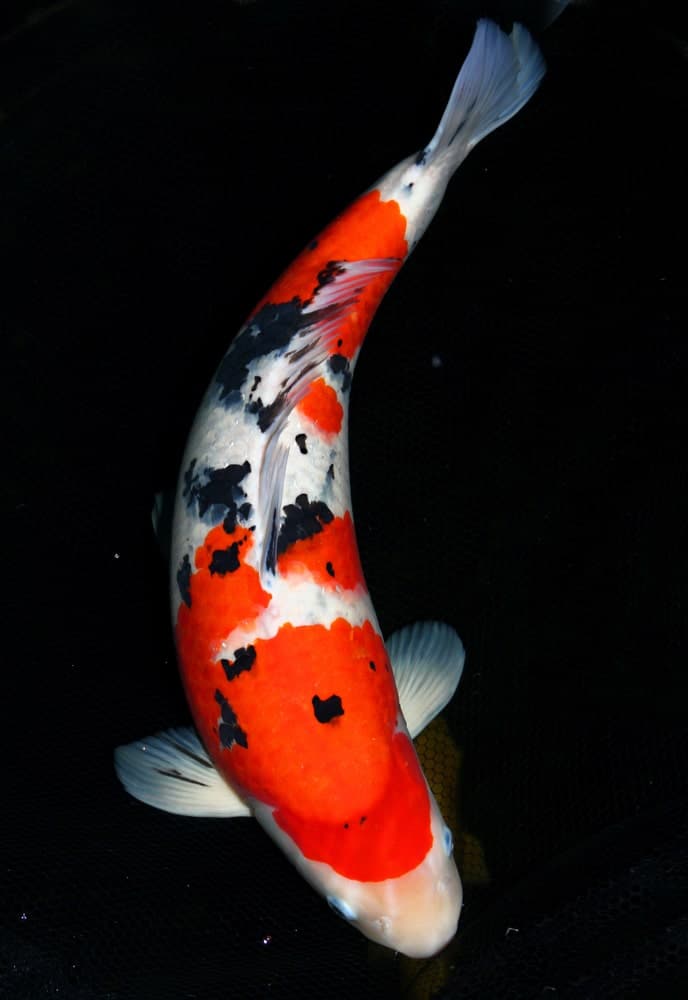 Taisho Sanke is also known as the Taisho Sanshoku or simply Sanke. Sanshoku means three colors. This name corresponds to the presence of three colors on the body of this type of koi – white, red, and black. It is quite similar to the Kohaku koi. Just like Kohaku, it has a white body (shiroji) with red-colored markings (hi). The only difference is the presence of black markings (Sumi markings) on its body. Taisho Sanke is among the ‘Big Three’ in the world of koi fish.

The head of a Sanke usually comprises of two colors, which are white and red, and is devoid of any Sumi markings. Another difference between Sanke and Kohaku is that the red markings begin from the top of the head, so the face is generally clear. The pectoral fins are white at the base with a few Sumi markings. 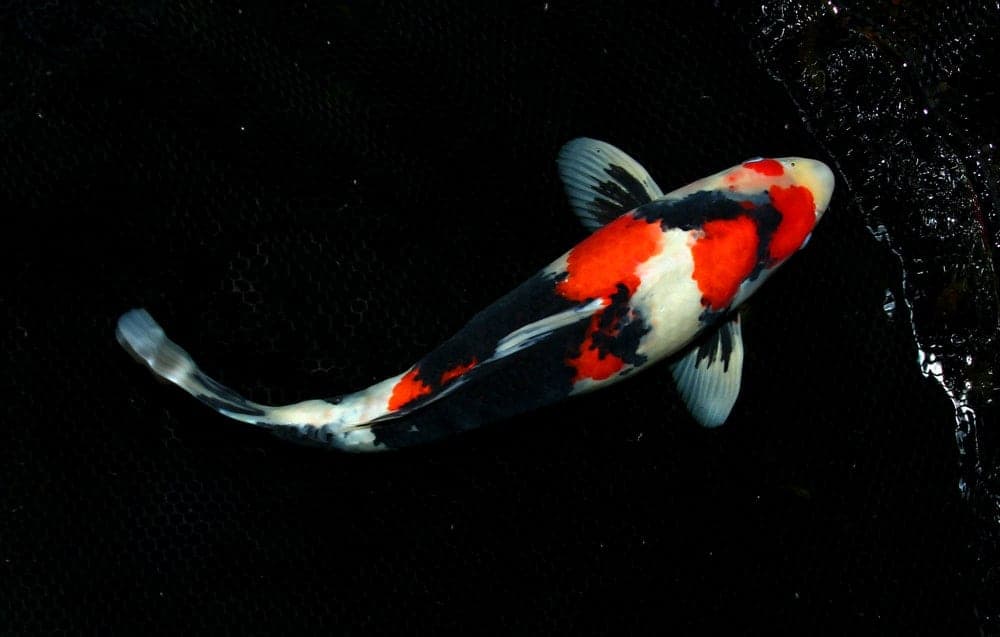 Showa is also known as Showa Sanshoku or Showa Sanke. As mentioned earlier, sanshoku means three colors. Showa gets its name due to the presence of white, red, and black colors on its body.

Showa is quite similar to Sanke. However, the main difference that sets the two types of koi fish apart is the Karasu (black-colored body) of the Showa. Showa has white and red-colored markings over a mostly black-colored body or base.

The white, red, and black-colored markings are distributed evenly throughout the body, with crisp and clean margins between each color. 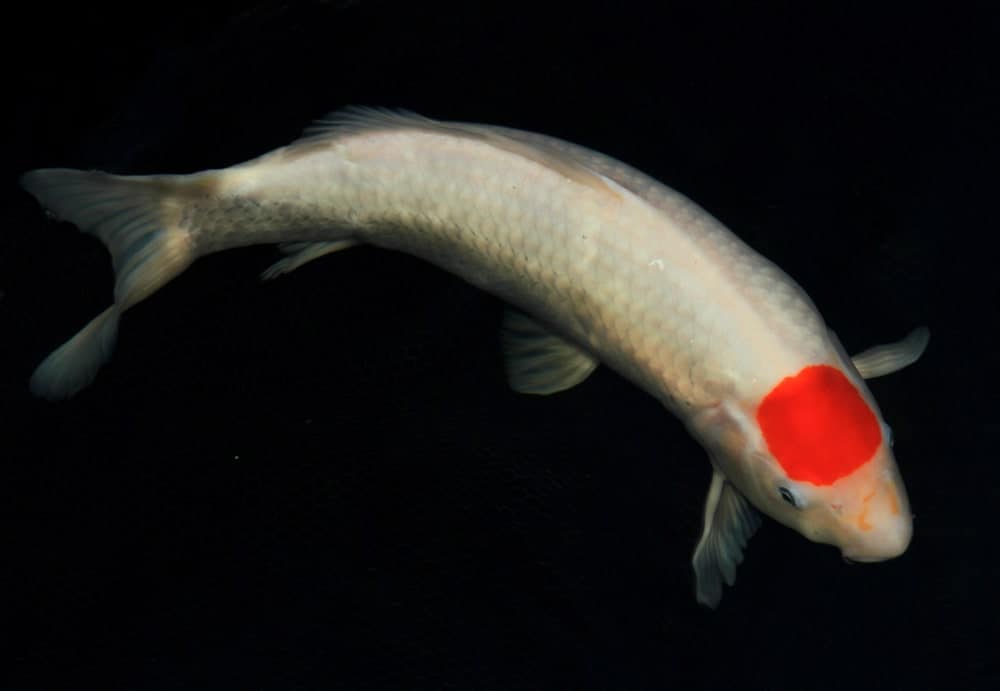 The Tancho koi fish is named after the national bird of Japan, the Tancho Crane, which has a prominent red spot on its head. Tancho is simple and sleek and is known for the trademark pigmentation (a red spot) on its head.

Tancho Kohaku is the most picturesque Tancho. It is snow-white in color and has a crimson red-colored spot on its head. This spot is traditionally round in shape, but it can be found in other symmetrical shapes as well. To fall under the Tancho umbrella, the spot on the head should be symmetrical, whether it is circular, oval, heart-shaped, or diamond-shaped. The spot should be a dominating size and should not be speckled. The defining characteristic of a Tancho koi fish is a single, clear, prominent, red-colored spot. 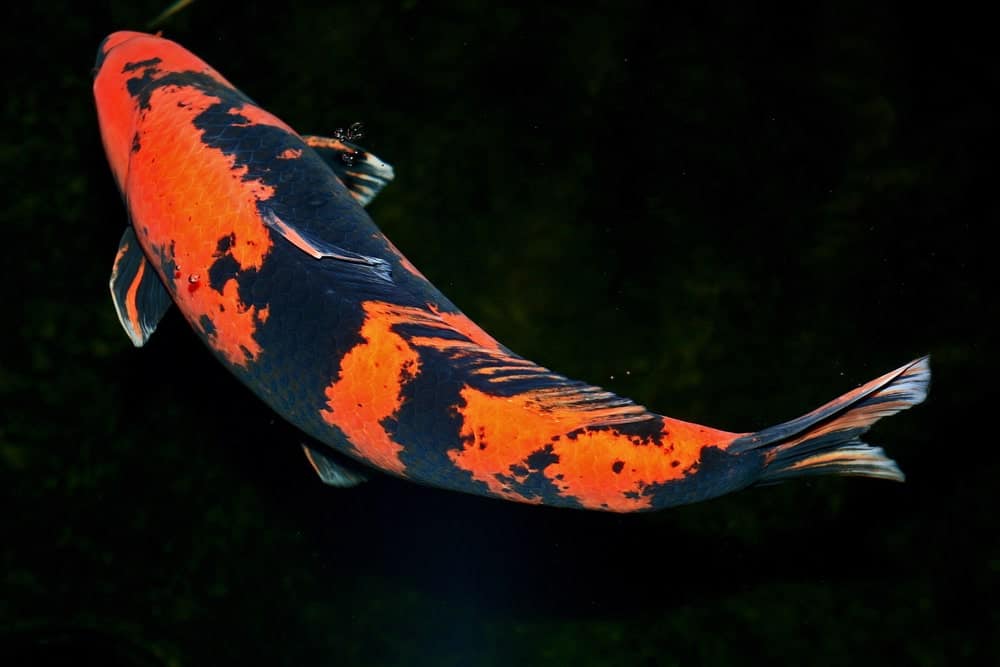 Utsuri is not just a single type of koi fish. It is the name of a category, Utsurimono, that includes three types of Utsuri koi fish; Shiro Utsuri, Ki Utsuri, and Hi Utsuri. Utsurimono means reflection. The koi fish that fall under in the Utsuri category have a black-colored body (Karasu) with red (hi), white (shiroji), or yellow (ki) markings.

The category has been named Utsurimono to indicate the overlaying red, white, or yellow patterns that suggest the reflection of the color on the body of koi fish.

The Sumi is wrapped around the body just below the lateral line in the Utsuri koi fish. These markings extend to the tail from the nose and are balanced throughout the length of the body as well as on both sides of the dorsal line. 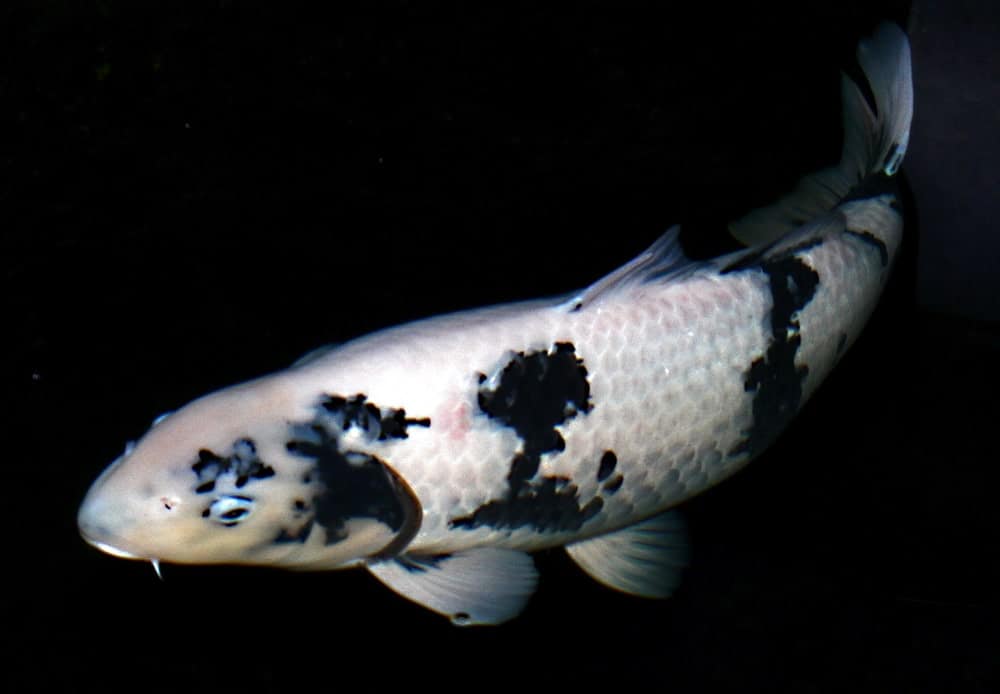 The literal meaning of Bekko is ‘tortoise shell.’ Bekko and Utsuri are often confused. However, the major feature that helps in distinguishing the two is that Utsuri has a black base with white, red, or yellow-colored markings whereas Bekko has a white, red, or yellow-colored base with Sumi (black-colored) markings. The head of a Bekko will always be clear of any Sumi markings.

The known variants of Bekko include Shiro Bekko (white body), Aka Bekko (Red body), and Ki Bekko (yellow body). The most common of all these variants is the Shiro Bekko.

The characteristic feature of a Bekko koi fish is that it will have no markings (black-colored Sumi markings) on the head. Sumi markings will be spread throughout the white, yellow, or red-colored body. 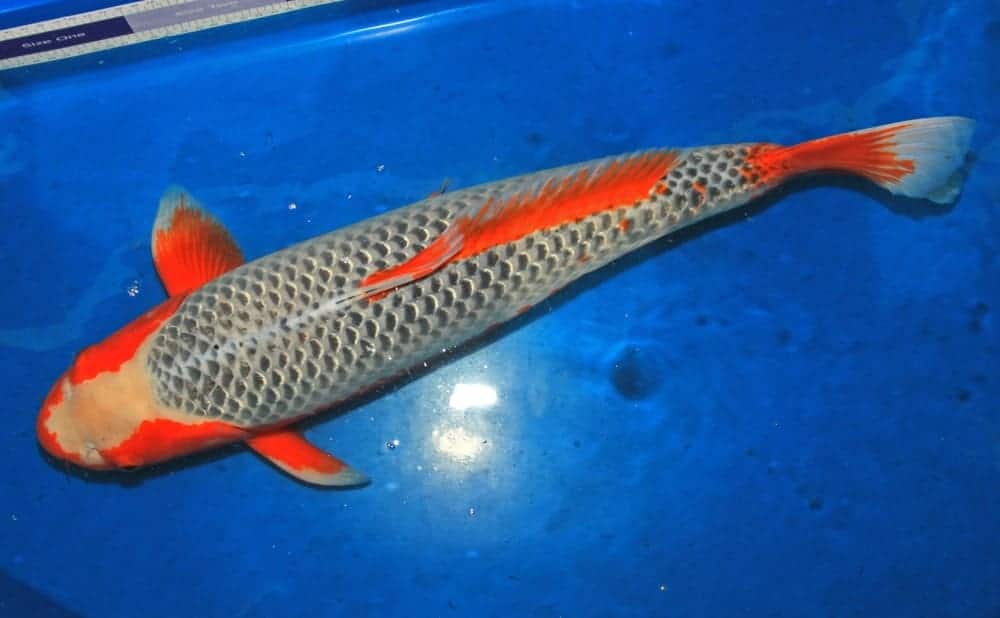 Asagi koi fish are strikingly beautiful creatures. They have a blue-colored, net-like pattern on the top of their bodies with red-orange coloration on the belly, fins, gill plates, and the body. As the Asagi koi fish ages, the red coloration (hi) spreads upwards from the bottom.

The Asagi koi fish whose bodies are more red than usual is known as the Hi Asagi. Another type of Asagi koi that is quite popular is the Taki Asagi. It has the typical blue-colored net pattern and red coloration along with an additional white-colored line of scales that runs between the red and blue pigmented areas of the fish’s body. The head of an Asagi is usually clear, without any markings. The color of the head is usually white or pale blue. 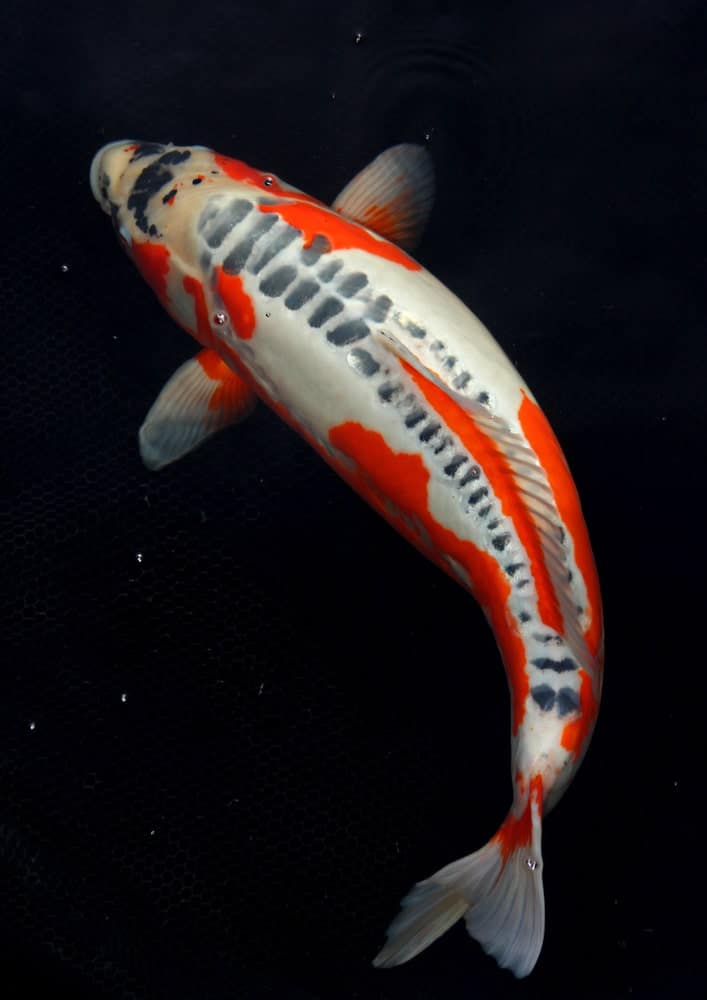 Shusui is a version of Asagi koi, but the difference is that Shusui is the Doitsu or scale-less version of Asagi. Due to the absence of scales on the top of the body, there is no blue-colored net-like pattern. The scales that are present form a single row along the dorsal line of the body.

The color of a Shusui’s head is pale blue or white and does not have any markings or spots. The presence of red-colored, extended cheeks is a common occurrence in Shusui koi fish. There are no specifications regarding the markings on the body except for the presence of a single row of scales running neatly and uniformly along the length of the back.

There are three different variants of the Goromo koi fish, which are:

Goshiki means five colors. This type of koi fish has a solid, white-colored body with an Asagi-like black-blue, net pattern spread throughout the length of its body. It is the result of breeding between Asagi and Kohaku koi fish.

As the Goshiki ages, the red hi plate become so thick and dense that it appears as an external sticker over the body of the koi fish. The net-like pattern also disappears, and only the thick red-colored plate remains throughout the body. If the koi has been taken care of the right way and the colors develop correctly, a Goshiki koi fish is a stunning sight to see! 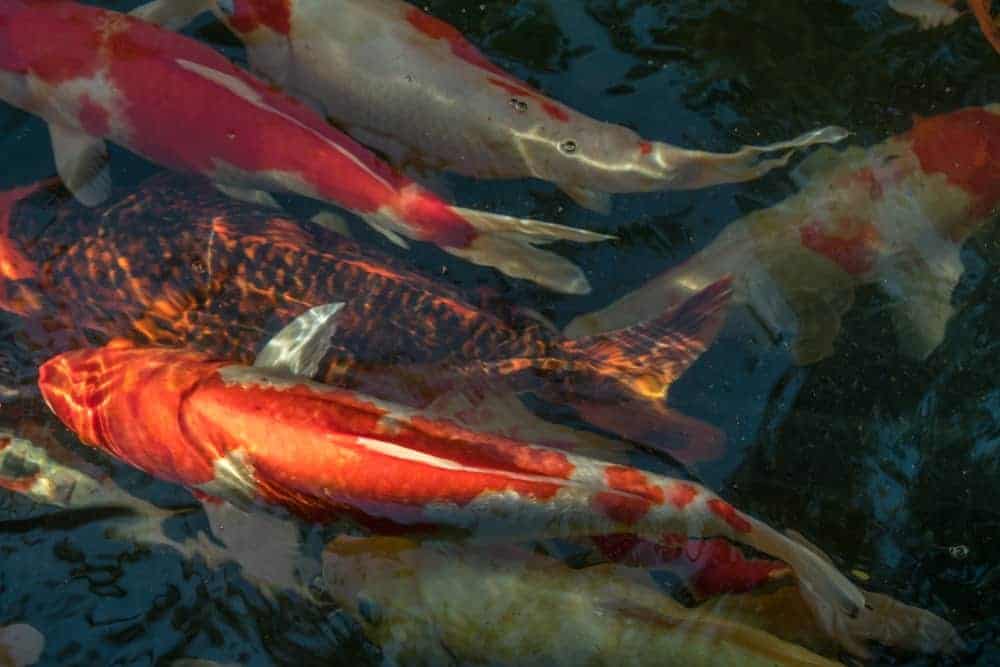 Kawarimono or Kawarigoi is a family of koi fish that comprises of fast-growing, large-sized koi fish. The most prominent types of koi fish in this category are:

Hikari Muji or Hikari Mono is a class of koi fish that are single-colored, with skin that is shiny in appearance. Hikari means shiny or metallic. Because of their shimmering beauty, these koi fish are the first to be sold from retail fish tanks. They do not have any patterns on their bodies, as a result of which, the shiny appearance is more profound.

The numerous types of koi fish that fall in this category are:

Hikari Moyo is a breathtakingly beautiful family of koi fish. A combination of shimmering skin with striking patterns and coloring makes Hikari Moyo koi fish a splendid sight to look at!

The fish that fall under the class of Hikari Moyo are:

There are numerous other types of koi fish like Hikari Utsuri, Kin gin rin, etc. These types are less common and far less popular as compared to the types of koi fish listed above. What makes koi fish such a favorite fish species for decorative purposes are their colors and patterns. Koi fish are the simplest, yet the most elegantly beautiful fish found in ponds, aquariums, and fish gardens.