Like jade plants? You'll be amazed how many different types of jade plants there are. We set out 18 different kinds along with photo examples and detailed write-ups.

Jade Plants are native to South Africa and Mozambique and are a popular houseplant around the world. It is formally known as Crassula Ovata and is colloquially referred to as the money tree, the money plant, or the lucky plant. Its popularity as a houseplant is initially rose due to the fact that it needs very little care to survive and can endure in most indoor conditions.

Caring for the Jade Plant

It is a succulent plant that requires very little water to survive in the summer, and even less in winter. Therefore, it is susceptible to overwatering. If placed in the sun, it can garnish a pink or bright red tinge around the leaves. In extreme cases, the green color of the plant is completely lost and is replaced by a faded yellow. This is a direct response by the plant’s system to protect itself from harsh sunlight by producing carotenoid pigments.

Known for its thick branches, green color, smooth leaves, and the pink and white flowers that bloom atop those, the Jade Plant is found in many varieties around the world. Many of these varieties have been cultivated over the years, and many cultivars (cultivated varieties) have been awarded with accolades. For example, the Hummel’s sunset variety has garnered the Royal Horticultural Society’s Award for Garden Merit. 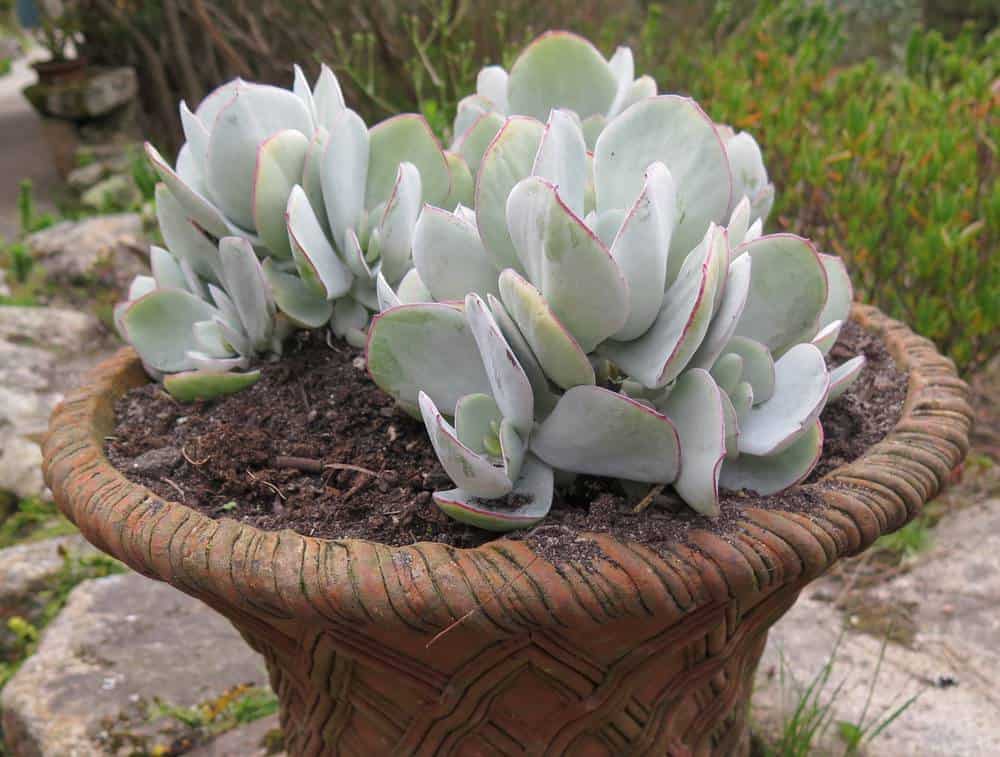 Commonly known as the Silver Dollar Jade, or the Blue Buddha Bush, it is known for its silvery-blue leaves and succulent shrub. It is a slow-growing plant with burgundy edges. The flowers that grow from its tips are long lasting and appear during the autumn-winter period.

The plant’s height can be restricted through containerization, but its total height doesn’t rise above the 60-centimeter mark. 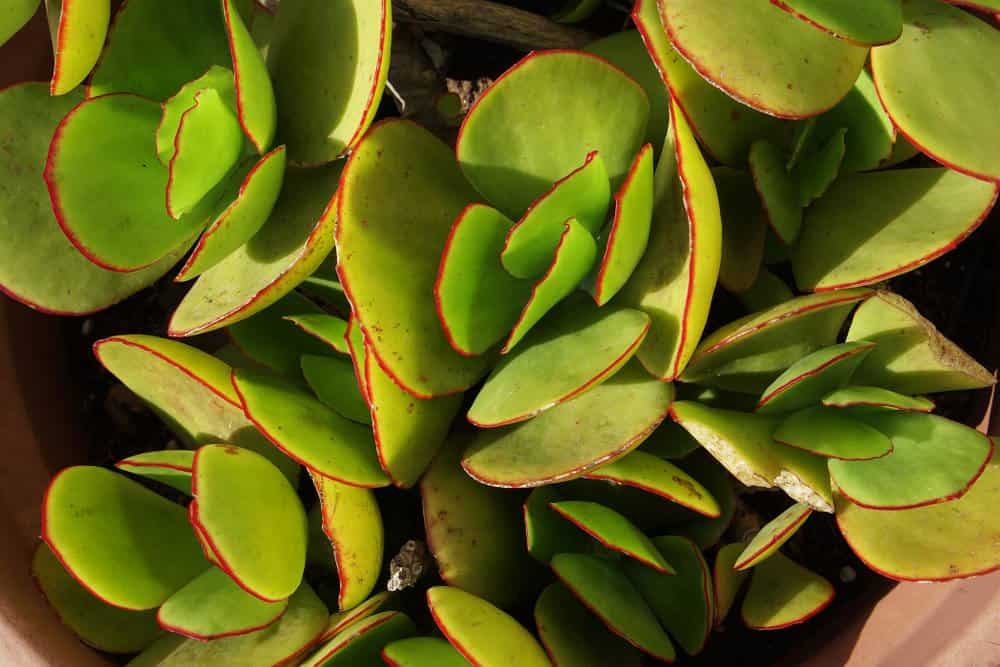 The Crassula Arbosescens Blue Bird Variegata is commonly known as the Blue Bird money plant or Jade Plant. It’s a slow-growing shrub like most jade plants that are found in nature, but its leaf coloration sets it apart from other varieties. It has mixtures of aqua, cream, green, and red. Its maximum height hovers around 50 centimeters, and its size can be reduced via containerization. 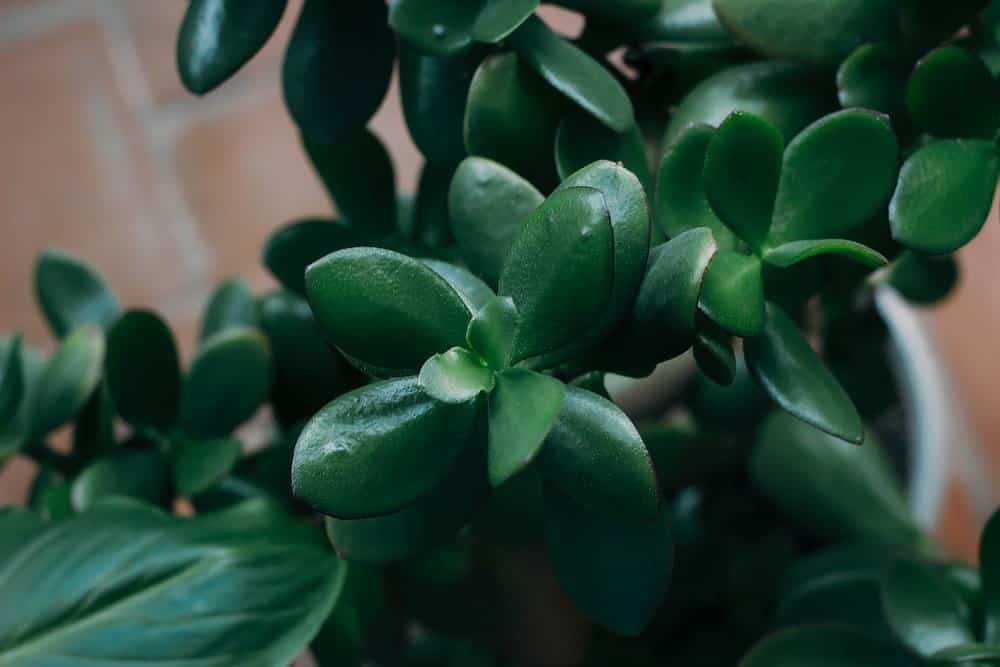 The Undulatifolia variety of Crassula Arborescens was first observed in 1974 and was introduced into the market place soon after. It’s commonly known as the Ripple Jade Plant and is preferred for its decorative purposes, so much so that architects specifically prefer it over other types of shrubbery. It has a bonsai-like feel to it, and the waxy leaves make it stand out from other plants. It also has foliage all year round. 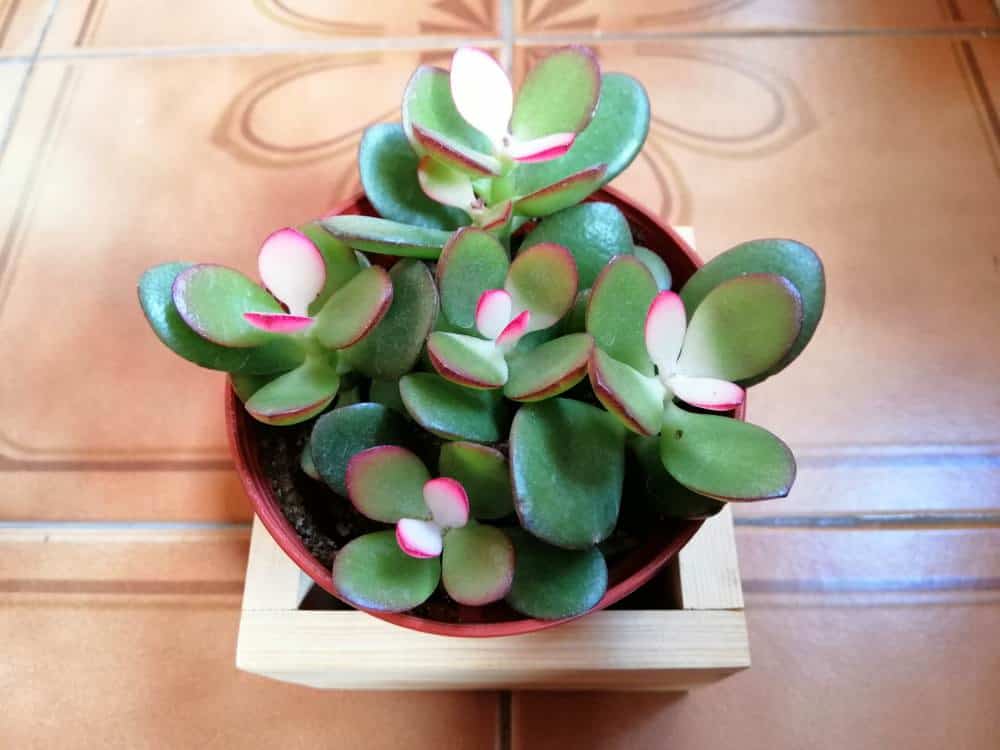 The Crassula Agentea Gollum is commonly known as Lady Fingers because of its curiously protruding, finger-like glossy green leaves. They are cylindrical in shape and red at the tips. The tips bloom during the autumn-winter months with pinkish white flowers. 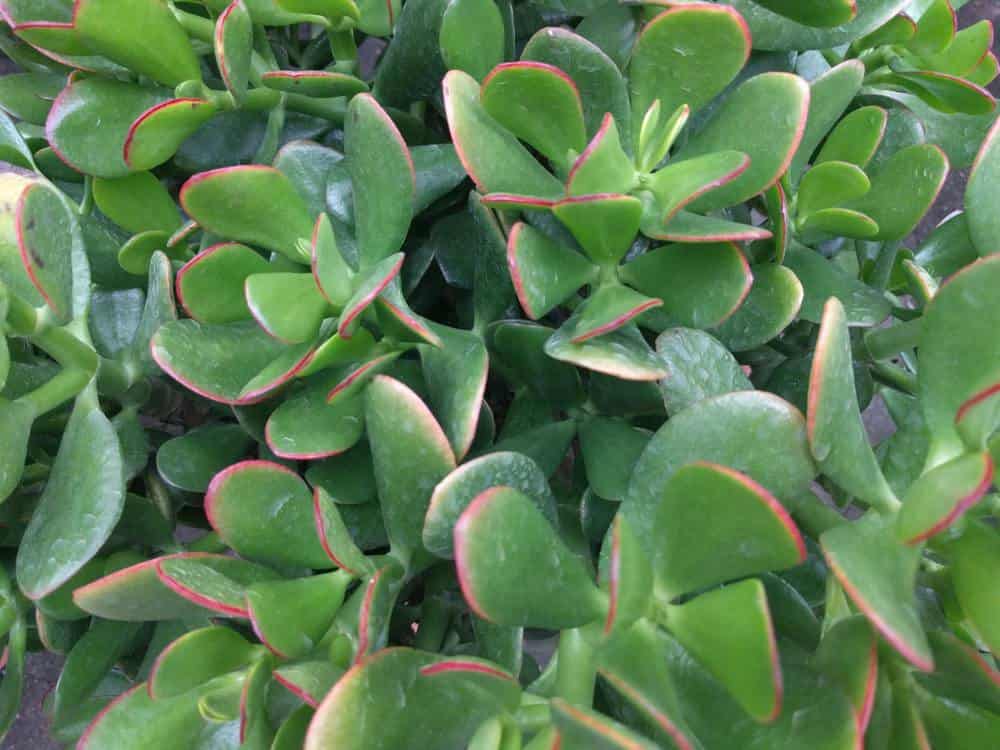 The Variegata variety of the Crassula Argentea Gollum is a standout in combination paintings because of its foliage. It can stand out in an entire painting because of the curious combination of green, white, and pink that it offers. It is considered as an ideal addition to the seaside gardens and flourishes during the winter and autumn months. Its foliage changes color if subjected to low temperatures, dryness, and low nutrition. 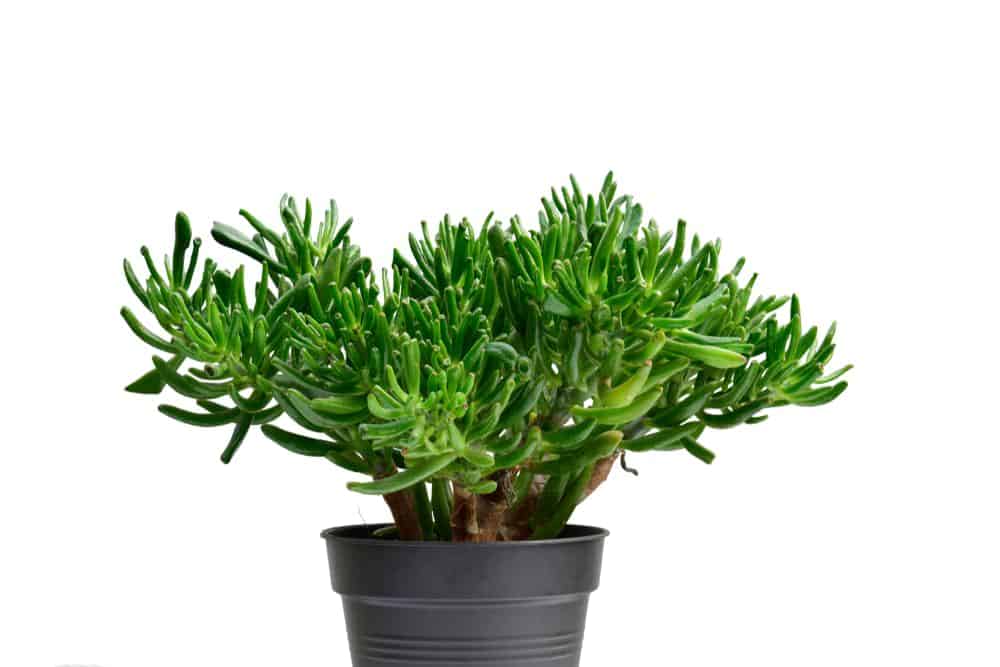 The Crassula Ovata is the most common type of Jade Plant and is known as the money tree, the friendship plant or the Lucky Jade. It was the original variety of the Jade Plant that was first discovered and is one of the most popular varieties in circulation today. It is very hardy and the fastest growing of all the Ovata cultivars. Pinkish white flowers appear on its tips like for every Jade Plant during winter, and its height can extend to over 2 meters in some cases.

People consider it ideal for planting near coastal areas. It is also used as a divider or display in gardens when trimmed and shaped properly. 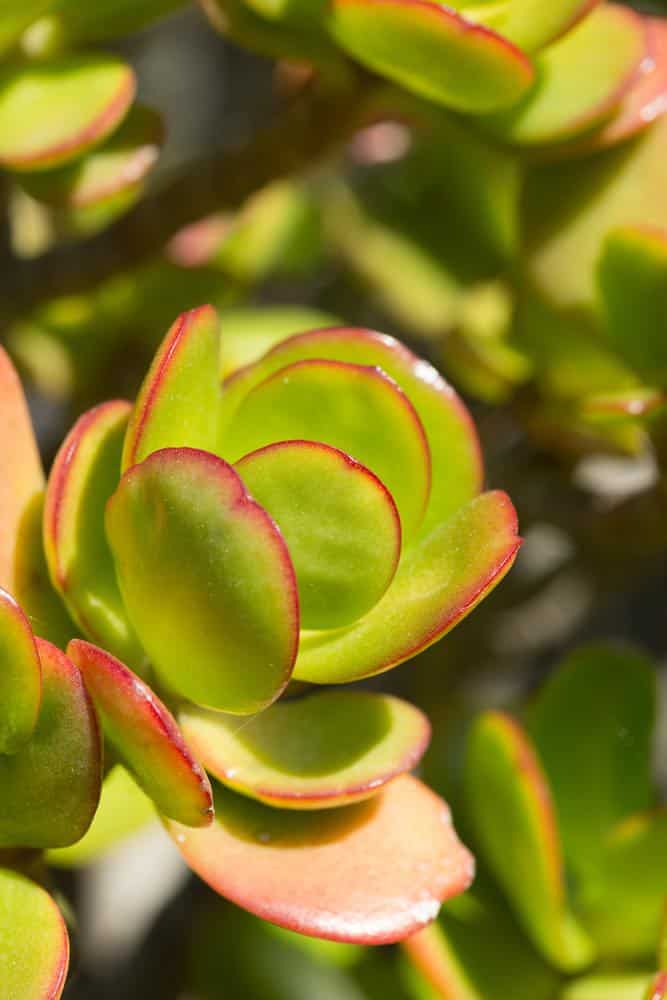 The Botany Bay variety of the Crassula Ovata was only recently introduced into the market in 2011. It is a compact and bushy plant which can be shaped and held in shape if confined to a pot. Its foliage experiences reduced stretching in low light conditions. The foliage also develops a red blush during dry conditions, usually prevalent during winter months. It can grow to a height of 1 meter over five years under ideal conditions. 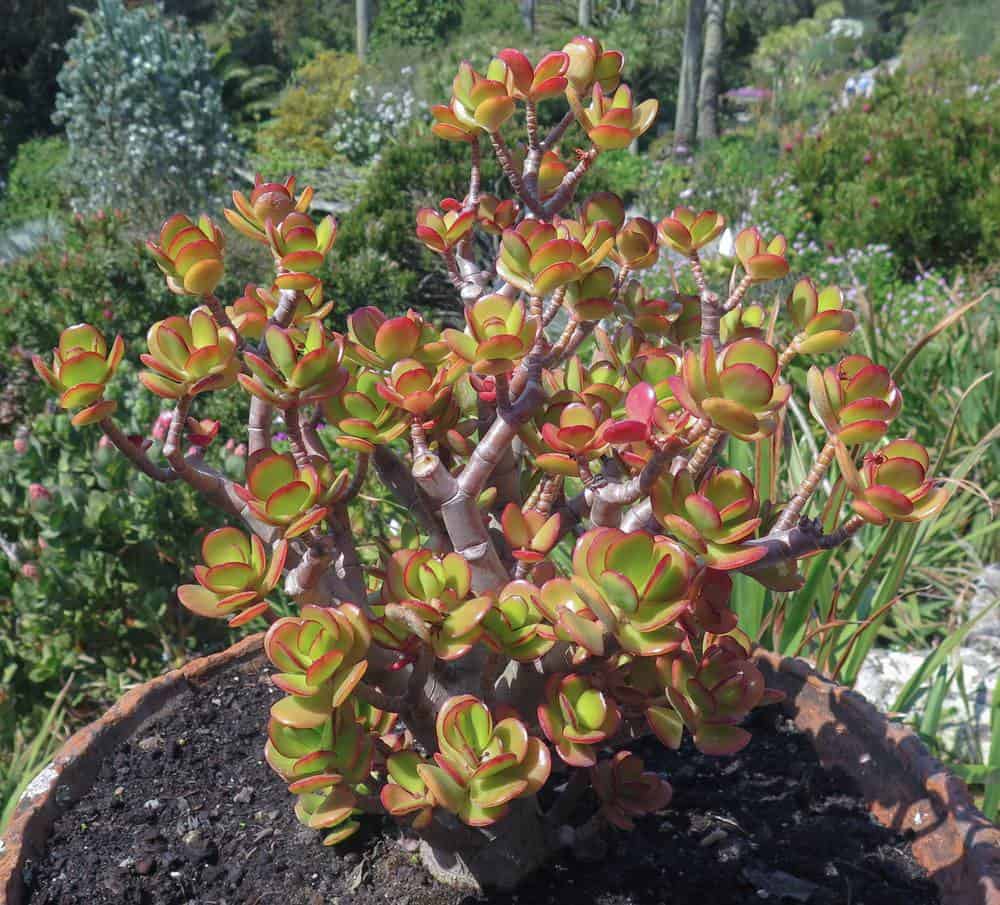 The Harbour Lights variety of the Crassula Ovata is instantly recognizable due to its characteristic red color. Its distinct color has made it a popular houseplant. It has distinctly smaller leaves than that of the Crassula Ovata and becomes extremely red during the winter months. Pinkish white flowers, of course, appear during the autumn and early winter months, giving it an overall radiant appearance. It is considered ideal for seaside residential decoration. 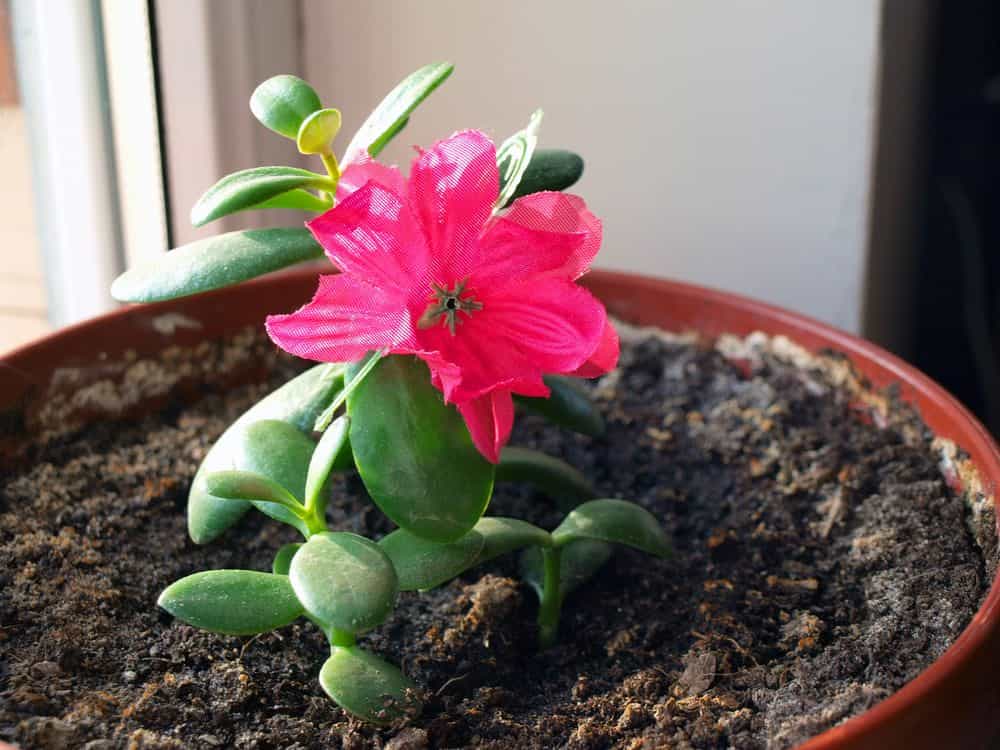 Commonly known as the Bonsai Jade Tree, this variation is named after the fictional race of people in the Lord of the Rings novels by J.R.R. Tolkien. This variety is known for its small height, no larger than 30 centimeters. The species emerged from the Paradisia Nursery in Victoria. It is known to exhibit similar features to its related species such as the red tips and the pinkish white flowers in early winter.

As its name suggests, it can be exceptionally receptive to containerization and restriction of growth. It can be mixed in with several other succulents in a combination bowl or planted on its own, and it still exhibits dwarf height.

This variety was appreciated by the Royal Horticultural Society in 1993 for its spectacular foliage color, and its thick bonsai styled trunk. It was awarded the prestigious Garden Merit award by the society that year. For this reason, it has become an increasingly popular houseplant.

It’s characterized by the foliage that becomes strikingly beautiful when winter comes it’s way. It grows from green to gold and red. As winter goes on, the colors only seem to get darker. It is a great plant to keep as a centerpiece at the dinner table or on a shelf. 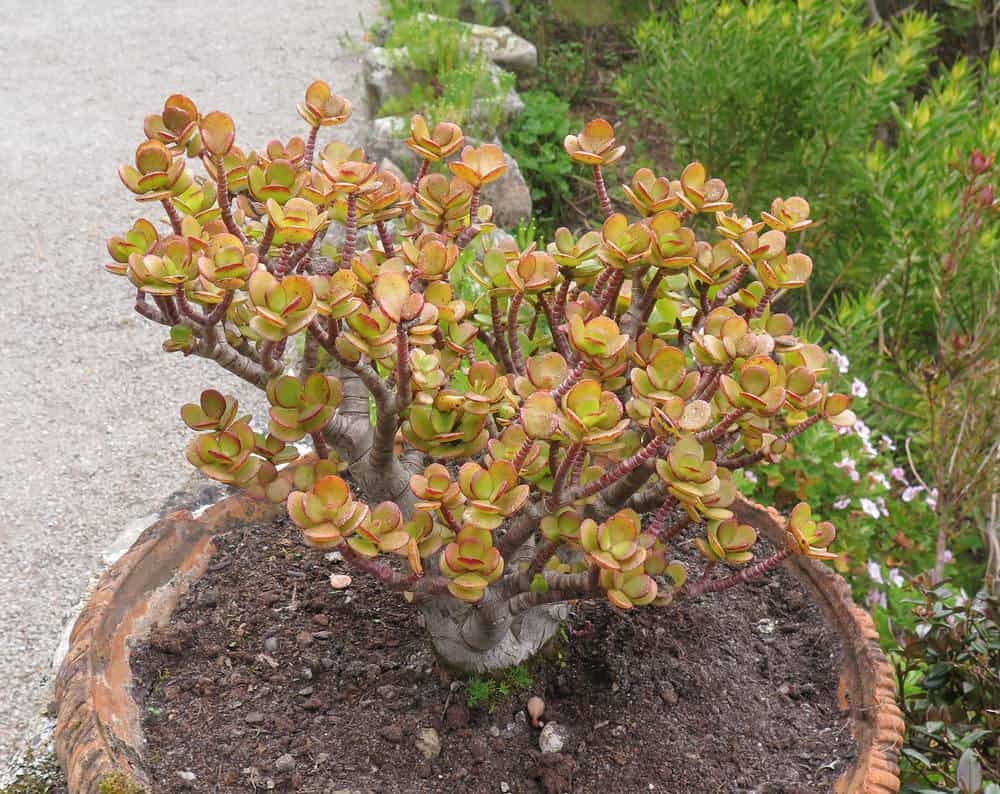 Known as the Little Jade Tree, its breed is as young and small as its name suggests. It was introduced into the marketplace in 2015. Found by chance by Jan Morgan from the Glenfield Wholesale Nursery Picton site, this plant is small and compact and can grow to a maximum height of 40 centimeters. Its popularity as a wedding gift or a party favor is considerable, and it can be found in small dish gardens or the indoors of houses. 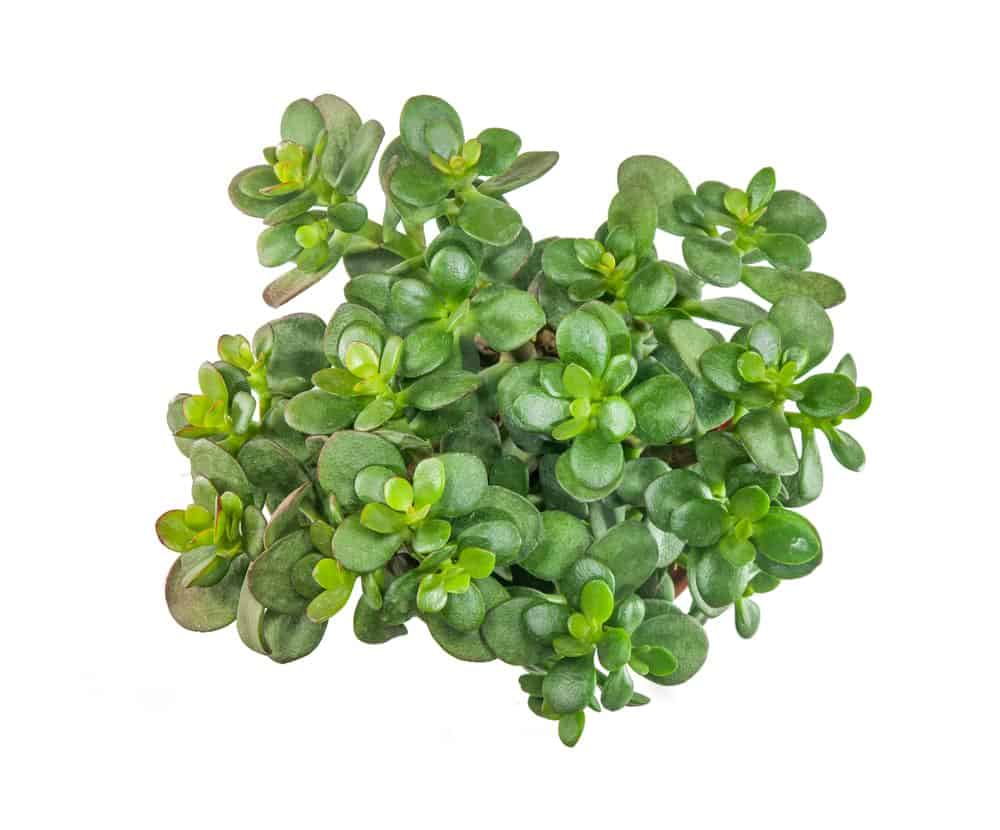 Known as the Baby Jade or the Miniature Jade, this is quite different from the Little Jade Tree variety of the Crassula Ovata species. Its growing tips tend to huddle together and branch out as well, creating a bushy, full appearance in small containers. Flowers appear colored pink and white during the winter months. The plant can grow to a height of 60 centimeters and it looks great when placed on house balconies as well as in their courtyards. It is a popular tabletop decoration and a great wedding gift or party favor. 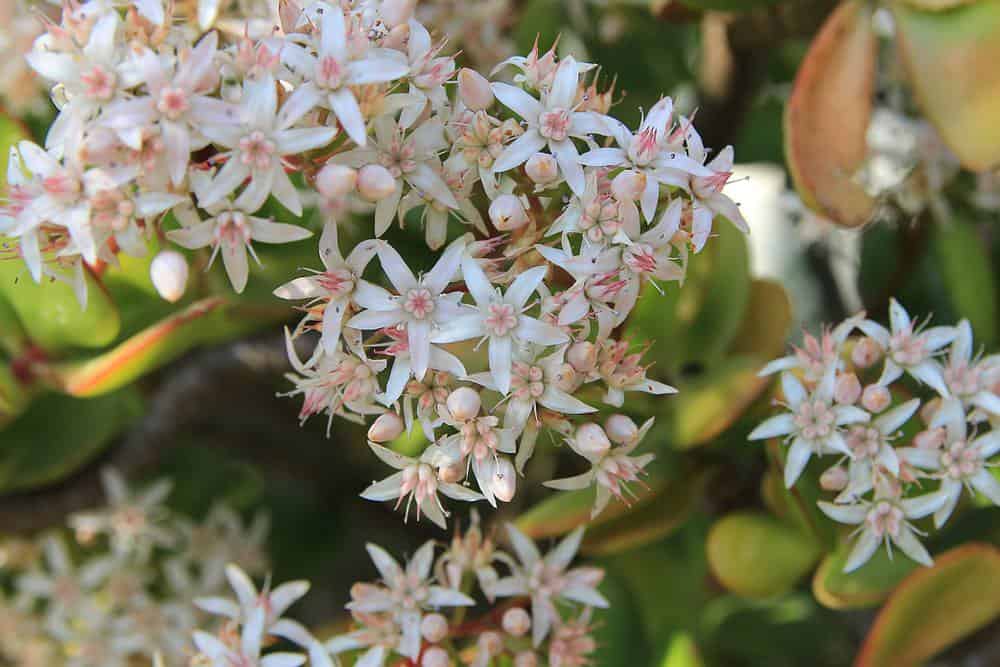 The Pink variety of the Crassula Ovata is named so because of its bushy exterior and the exceptional number of flowers that bloom every year. The foliage develops a red blush during the year under very dry conditions. The early winter and late autumn months show small pink flowers appearing on its tips that fill the exterior of the plant. It can grow to a height of 1 meter over a period of five years. 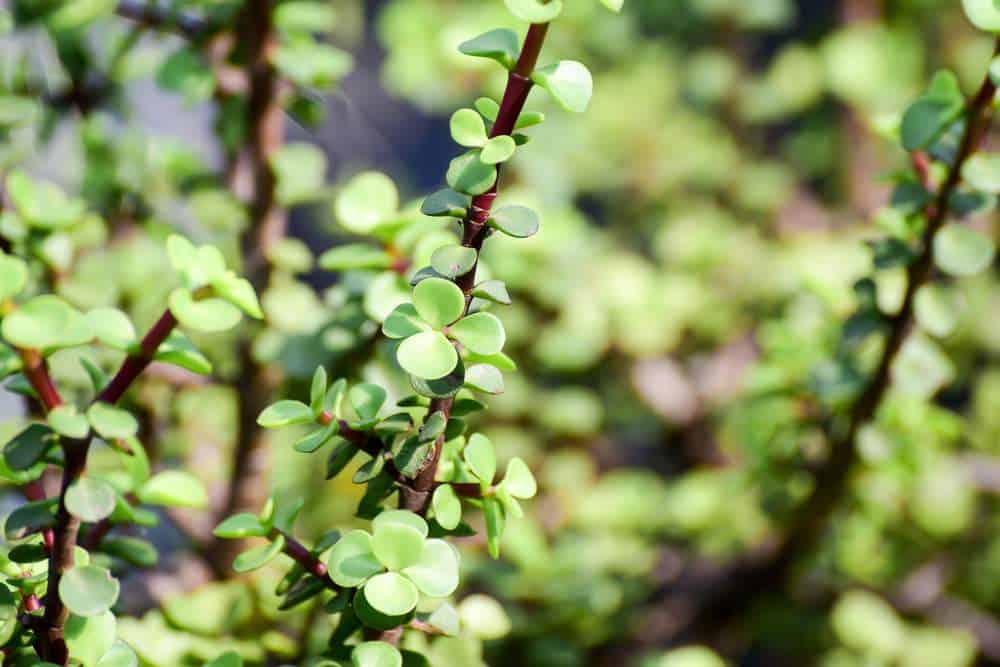 This is called the Chinese Jade Plant or the Pork Bush. Its decorative and structural succulent features make it a very popular houseplant, albeit one that is kept outside. It can grow up to 2 meters in height and can be controlled with proper trimming and shaping. It can withstand long drought and heat waves but doesn’t flower during cultivations. It is not a flowering plant at all, hence it doesn’t exhibit the white and pink flowers during winter unlike its relative species. 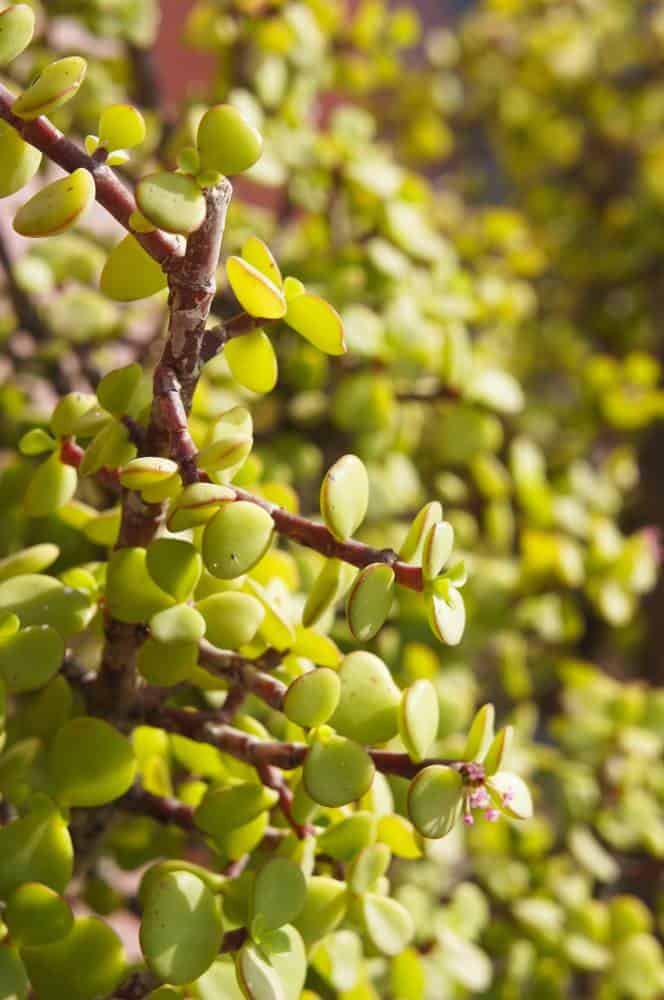 The Afra Aurea is beautifully nicknamed the Yellow Rainbow Bush or the Yellow Elephant’s food. The Afra Aurea changes colors throughout its growth. Its shades are influenced by the time of year and the amount of water it gets as well as the fertilizer that is used to grow it. It thrives in both full sunlight and light shade, and rarely displays the whitish pink flowers that are characteristic of Jade Plants. It can grow to a height of 1 meter. 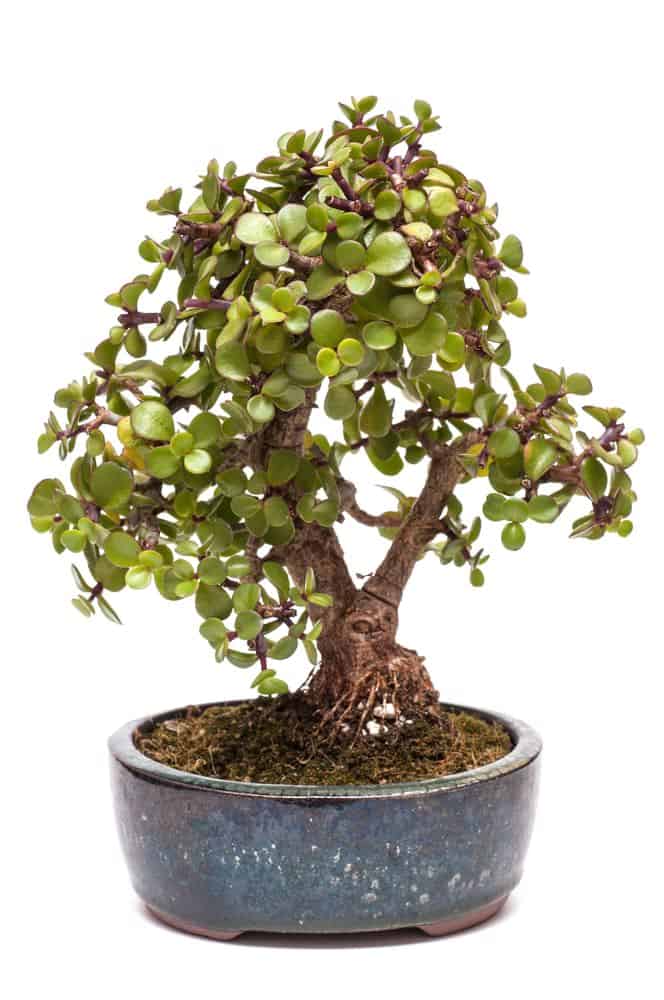 The Cascade is known as the Prostrata, the Low Elephant Bush, or the Trailing Elephant Bush. It is covered with rounded, fleshy leaves that grow from maroon/mahogany stems. It’s not grown as a flowering plant and can grow to 1 meter in size. It can be used for cascading over dry retaining walls. 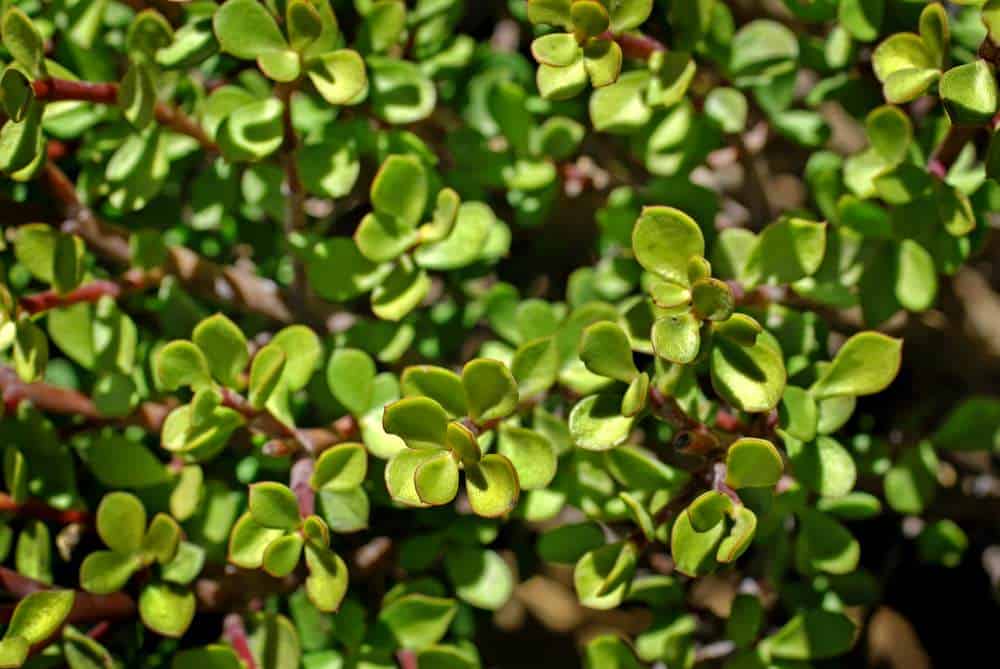 The Large Leaf variety is known as the Green Penny Jade. Its rounded, fleshy leaves grow on dark red stems but don’t sprout any flowers. Although the plant is known to grow to about 2 meters in length, it can be controlled by trimming. It is a popular houseplant used to decorate balconies and patios. It can also be shaped into hedges and fences as well as screens. 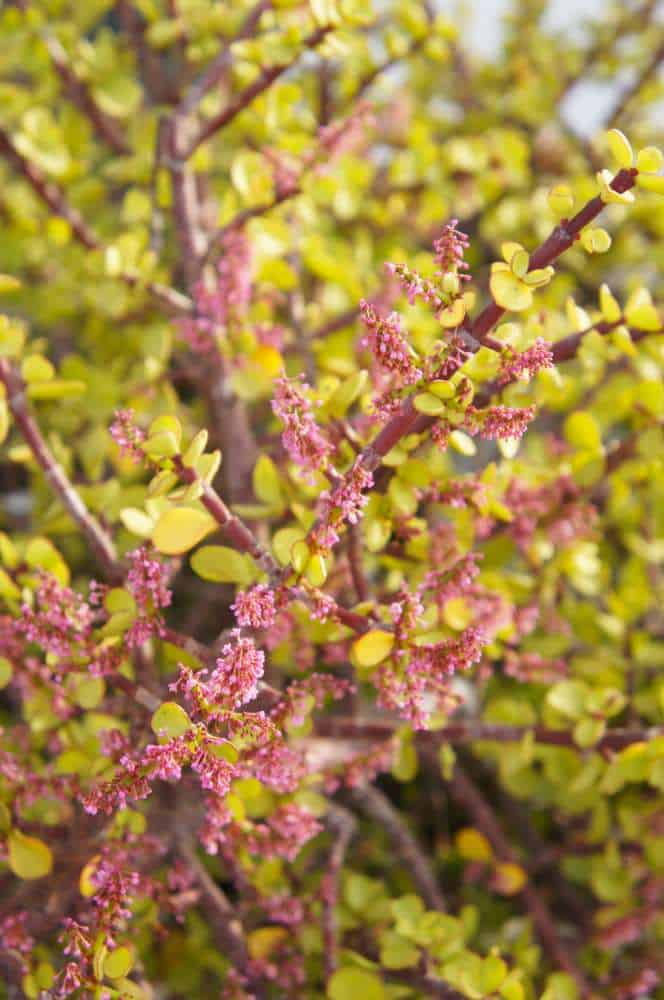 The Variegata is known as the rainbow bush. It’s a succulent shrub that has creamy leaves with a light green center stripe. It has a tinge of magenta on the edge of the leaf which persists all year round. It doesn’t flower in cultivation and can grow to a height of 1 meter.

The Jade Plant is found in many varieties as mentioned above, and it persists as a popular houseplant due to its sparse requirements for care as well as its simple but beautiful colors and ability to persist in harsh conditions. 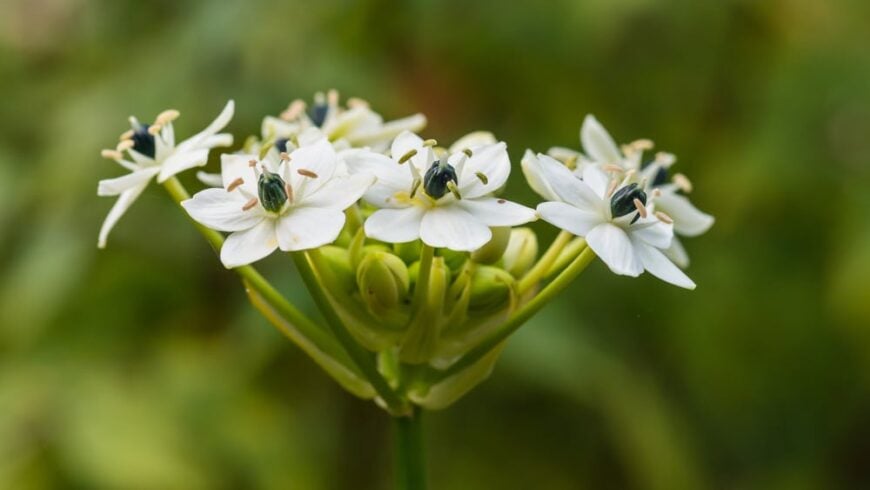 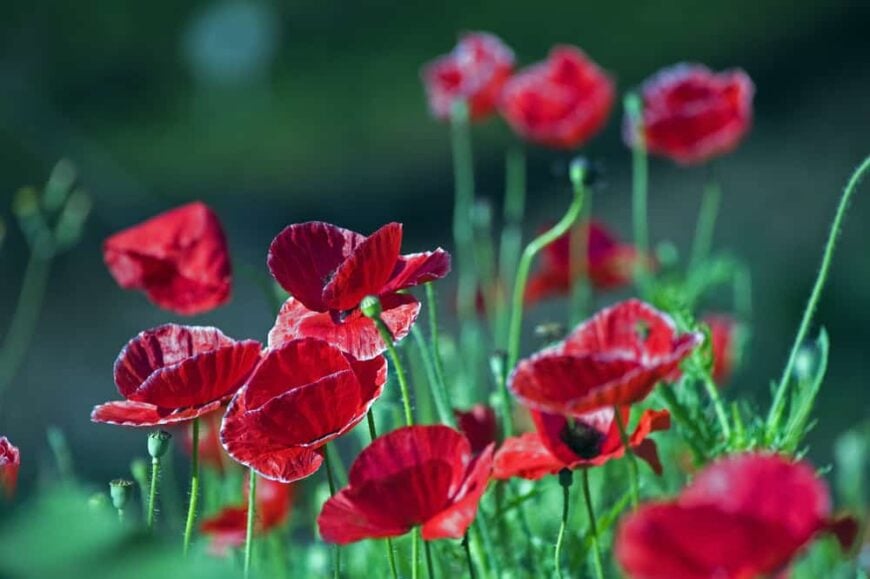 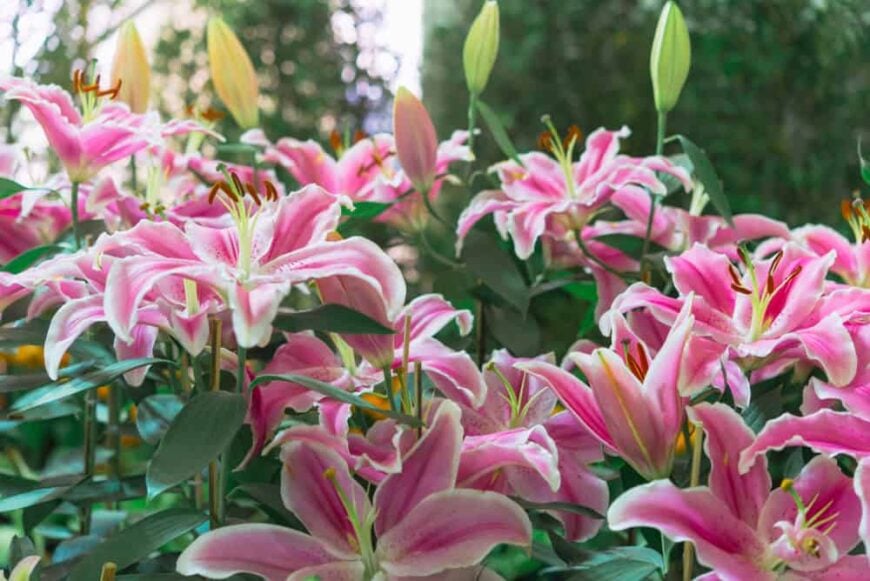 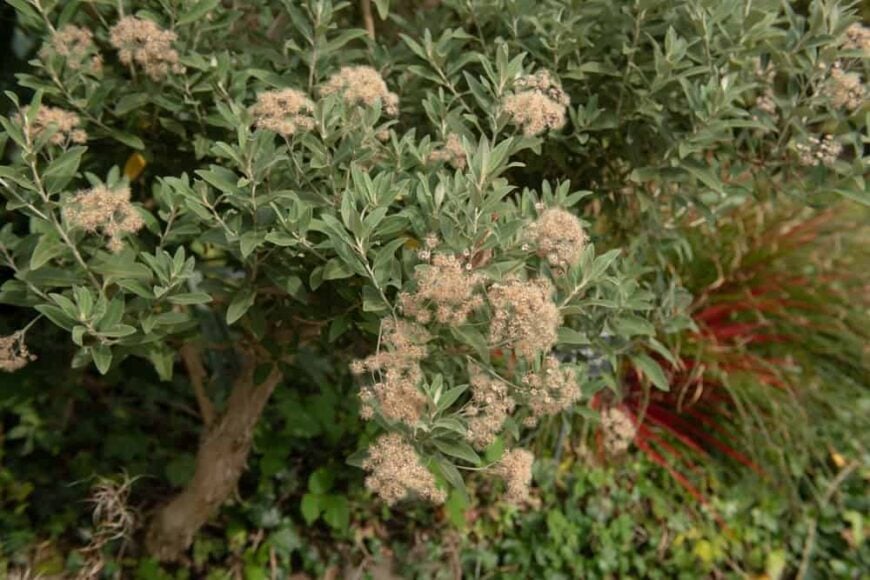