Discover the different types of hemlock trees that you can plant on your yard. They are evergreen tree that's attractive, prevent soil erosion and home to animals. Know their varieties and other uses and be amazed on what these stunnning trees can do. 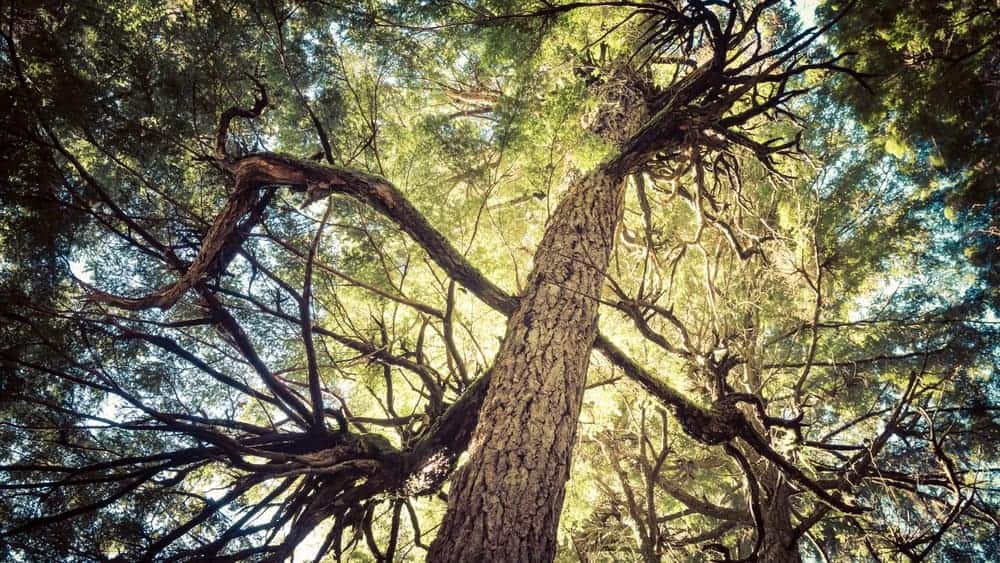 Known as Tsuga in Japanese, hemlock is an evergreen tree that belongs to the pine family and the subfamily – Abietoideae. Research shows that there are about 10 species of hemlock. Four of these species belong to America, while the other six are native to regions in Asia.

Hemlock boasts flat, needle-like leaves which are spirally embellished on the tree branches. The leaves are light green in color and tend to become darker as they age. Being a typical conifer, hemlocks develop cones (both male and female ones) instead of flowers. These cones tend to be at the end of the branches in a small, oval shape with a touch of brown color. Hemlock is known for its dense, wet habitats, constituting dry, rocky soil. The species of hemlock can be found in and around forests, on rocky areas, river banks, hilly regions, and in the ravines as well. For hemlock to grow sound and healthy, it must be cultivated in regions that receive enough annual rainfall and snowfall.

This ornamental plant helps in preventing soil erosion and flooding due to its strong root system. Owing to its strong and sturdy bark and wood, the tree has many applications in the lumber, paper-making, and furniture-making industry. The major threat to hemlock trees is sap-sucking insects – Hemlock Woolly Adelgid—that were accidentally transferred to North America during the last century. Since then, these harmful pesticides are attacking hemlocks and ruining them.

See also  How to Tell if Your Strawberry Plants are Overwatered

Did you know that hemlock trees come in six major types? Here is your chance to learn about them in detail. 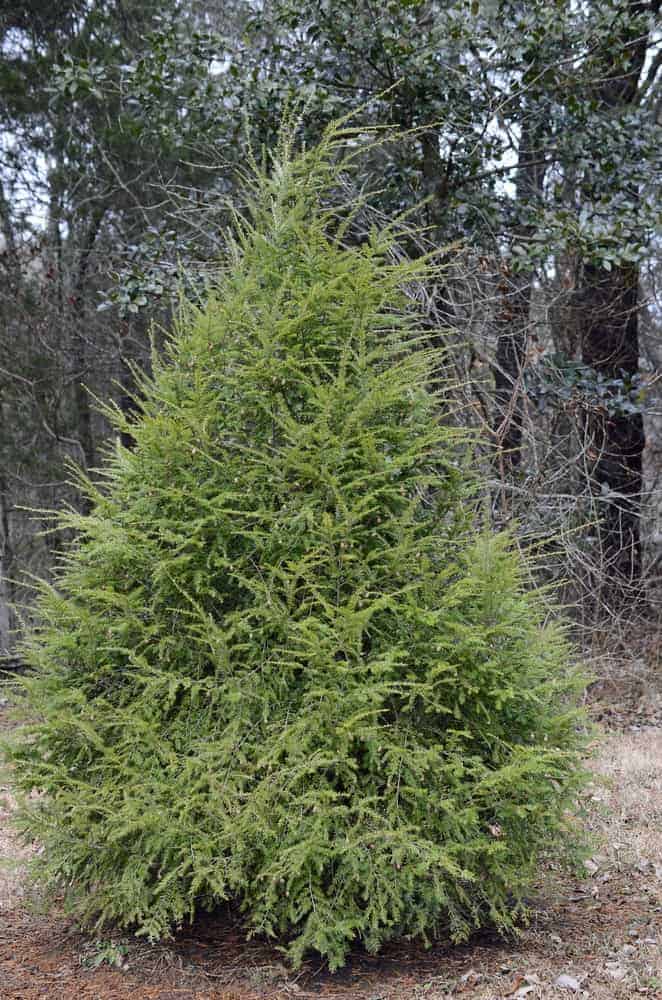 Scientifically called Tsuga Canadensis, Eastern hemlock is a slow-growing plant that takes almost two decades to reach its ultimate height of 40 feet and width of 25 to 30 feet. That being said, the tree is a long-living one and has the ability to survive up to thousands of years.

With other popular names like Canada hemlock or Canadian hemlock, this evergreen plant has plenty of uses. For example, Eastern hemlock is a habitat for small mammals like deer, rabbits, and many kinds of birds. Due to its hardiness, the shade-tolerant tree is also able to tolerate light drought conditions. To visualize eastern hemlock, note that it best resembles a Christmas tree as it boasts intense green needle-like leaves on pyramidal branches. Plenty of brown cones hang from the branches of hemlock trees like small, beautiful ornaments just like goodies hang from the branches of a Christmas tree. The tree also boasts male and female flowers, each of them possessing different structures.

The large tree requires moist and well-drained soil along with partial to full sun for healthy growth.  During its growth, this Christmas-like tree must be protected against pesticides such as hemlock wooly adelgid. In the past, the breed of these pests attacked this beautiful plant and infected hemlock forests in the Eastern United States. Some other insects that may devastate eastern hemlocks include bagworms, hemlock scale, needle rust mite, and needle blight. If not sheltered properly, this hemlock can get damaged due to strong winter winds for good.

See also  What is a Banyan Tree? (Origins and Botanical Characteristics) 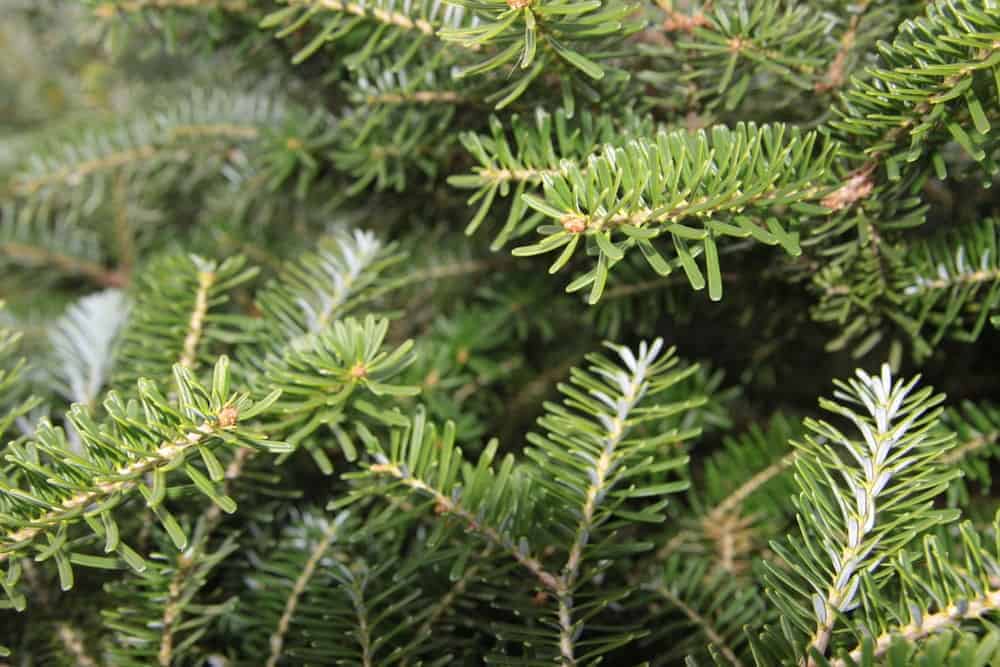 Western hemlock tree (Tsuga heterophylia) is a large tree that usually grows 30 to 50 meters in height. As compared to Eastern hemlock, this evergreen tree has a narrower crown and droopy branches with light, feathery foliage. As it is common with all types of hemlocks, this glorious tree has sharp, needle-like leaves that have a flat and soft texture. The upper surface is usually yellow to dark green while the underneath is whitish. These needles are ill-proportionate and have flat, breezy sprays.

The tree also produces small greenish-red seed cones in abundance. As the tree ages, the cones change its color into darkish brown. Unlike many trees that tend to become weak as they age, the reddish-brown or dark brown bark tends to become thick as the tree gets old.

Western hemlock grows best in USDA zones 6 through 8 which include the east and west sides of the Coast Ranges as well as the interior west side of the Rocky Mountains. When provided the right amount of soil and moisture, this huge hemlock can shoot up to more than 250 feet in height and 40 feet in width. Unfortunately, the tree doesn’t enjoy a long-living life as eastern hemlock. However, it is able to survive and thrive for at least 150 years.

Western hemlock loves to grow with different kinds of tree species which is why it is cultivated in the center or around a group of other mature trees. Intolerant to heat and drought, western hemlock is an excellent source of food for elk and deer and is home to many birds and small animals as well.

See also  What is an American Basswood Tree? 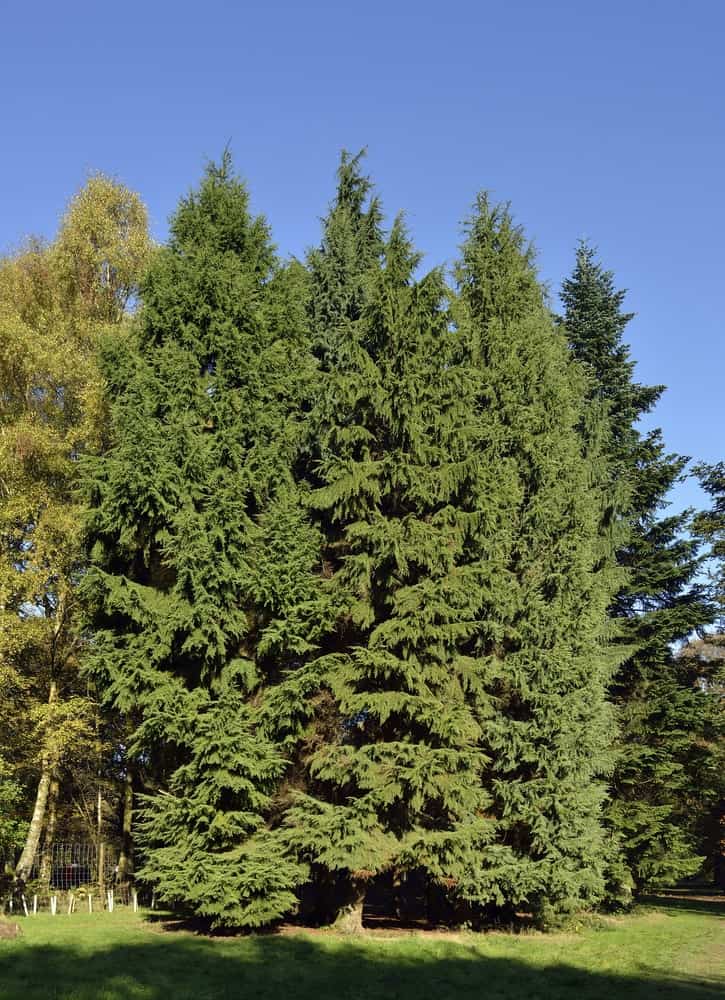 Mountain hemlock (Tsuga mertensiana), also known as, black hemlock and hemlock spruce, is a humungous tree with an ability to grow 40 m tall and 150 cm wide. The fact that it can develop into a 100-feet tall tree, not many people are successfully able to incorporate this giant tree into their landscape. Even those who are able to cultivate and grow monstrous hemlock fail to maintain it on a daily basis.

Native to the west coast of North America, this species of hemlock boasts a thin, gray bark, cone-shaped crown with drooping orange lead shoot which eventually becomes cylindrical as it ages. As usual, the leaves are pointy like a needle, an inch long and 0.06 inches wide. These leaves are flat, broad, and sharp-tipped with a bluish-green upper surface, bluish-white stomata, and a green midrib. What distinguishes them from other hemlocks is the fact that they possess stomata on the upper surface and are spiral in shape around the shoot.

Like any other hemlock, this tree also develops pendulous cones as it matures. These small cones have barely-visible scales which are dark purple as they burst into shape but turn into a reddish brown color after pollination. This conversion from one hue to the other takes almost five to seven months. In appearance, the reddish-brown seeds are long and slender with a pinkish-brown wing.

Generally, these hemlocks are raised along with other trees like amabilis fir or yellow cedar on the North American coast. They are usually seen in deep, insulating snowpack in forests. Additionally, they also grow in bogs on the mid of coast.

See also  41 Different Types of Iris Flowers For Your Garden

Mountain hemlock tree offers medicinal uses which is why it is the most sought-after hemlock. The bark of this tree is considered to be diaphoretic, astringent, and diuretic in nature. The pieces of the inner bark or twigs are added in a healing tea to cure colds, influenza, diarrhea, and bladder or kidney issues. 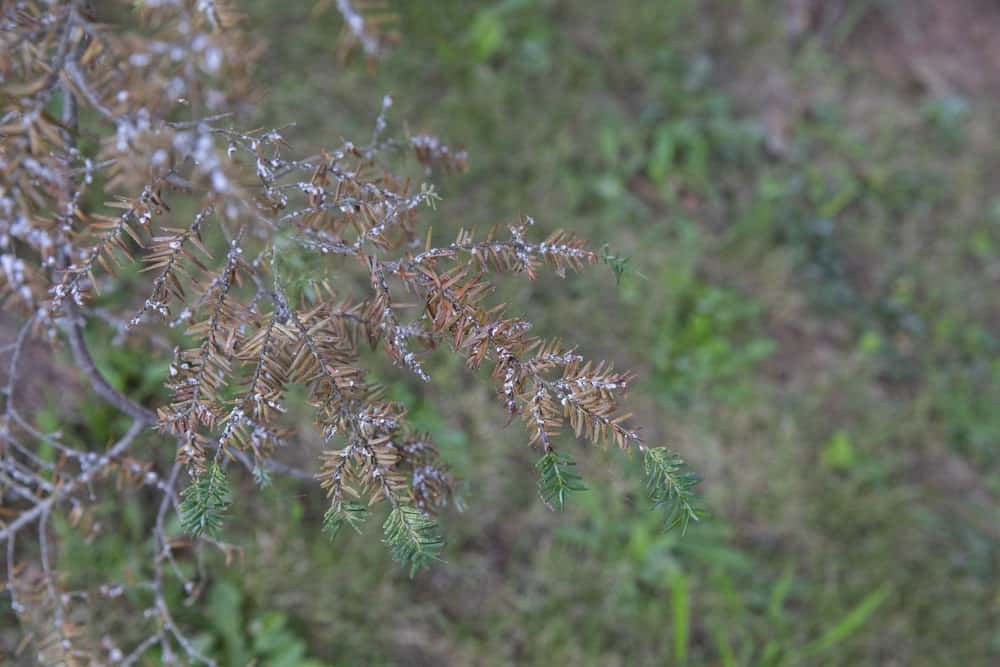 Botanically named Tsuga caroliniana, Carolina hemlock tree is a conifer species, belonging to Pinaceae family. Like mountain hemlock, it is a super tall tree, with the ability to grow up to 99 feet. It is enormous to the extent that it is easy to spot it from afar, as it is usually cultivated in groups and wild areas. However, when planted in yards, it is ensured that the tree is planted in USDA zones 6 through 7 which means that the tree stays shorter than 60 feet in height and 25 feet in width.

Often remarked for resembling Eastern hemlock, Caroline hemlock is different in the sense that its seed cones are longer than Tsuga Canadensis. The tall tree consists of short, glossy green needle-like tips that are round in shape. These needles tend to have two white stoma stripes, one on the front and the second on the back. These needle-like leaves also produce brown cones that are usually 3 cm long. In addition, the big tree exhibits small, round blooms which are barely visible on canopy-like branches – the most distinctive feature of the hemlock.

Caroline hemlock is a unique species of tree but unfortunately, it is widely threatened by hemlock woolly adelgid as they are widely distributed in dry, rocky places where the population of these pests is highly concentrated. The wood obtained from this hemlock species is of little to no value. That’s because of the mediocre quality of the wood and the rare population of the hemlock. While it may not be valued by people, it is quite useful for many birds and mammals as they feed on the tree’s seeds while beaver, rabbit, and porcupine munch on the bark.

See also  How Much Water Does Growing Garlic Need? 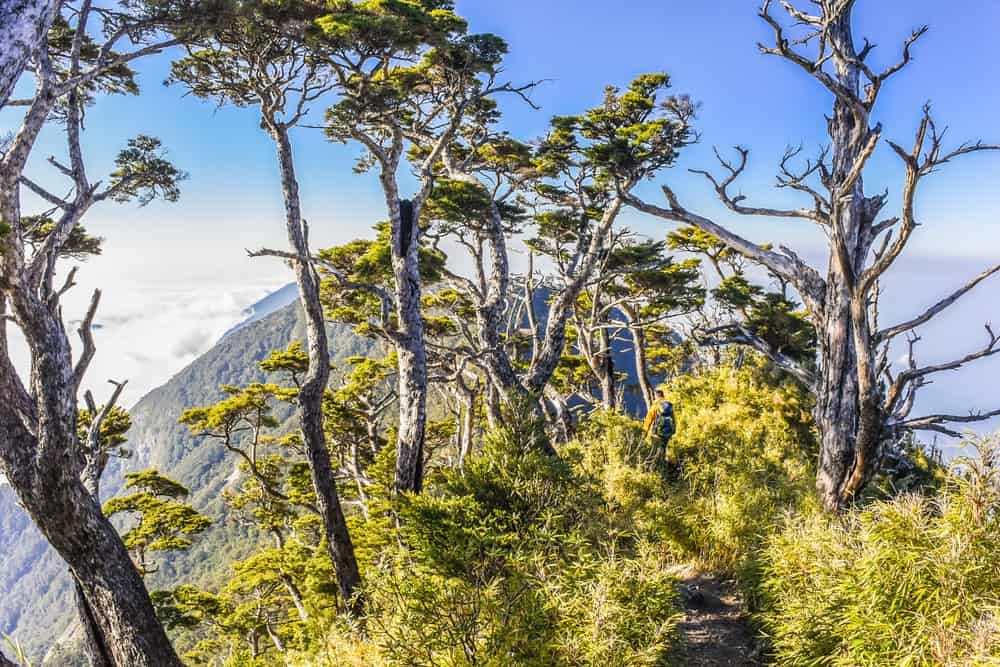 Also known as Tsuga chinensis, Taiwan hemlock tree is an evergreen coniferous species that grows up to the height of 150 feet and 5 feet wide. Both the inner and outer bark varies in length but is usually blackish to reddish brown in color with irregular scales. When the bark is cut, the freshly snapped piece is white with woody sheets that are used for a wide range of purposes.

The spirally leaves are flat and straight, in a striking olive green color. The upper side of the leaf is grooved while the underside consists of stomatal bands. The shoots feature pollen cones that are usually dull purple in color and about 6mm in length. As the cone begins to mature, its color changes from purple to darkish-brown. The grown-up cones are pendulous in shape with large and streaky scales.

Ever wondered where you can find these oldest hemlocks? This tree species is widely found in the regions of Asia – China, Tibet, and northern Vietnam. They are usually populated in mixed forests in the mountains of SW China. The good news is that it is the only type of hemlock that is supremely resistant to hemlock woolly adelgids. However, it is still not confirmed what makes this hemlock opposed to these deadly pests. To find that out, the tree’s materials were collected throughout T. Chinensis by the researchers a long time ago. 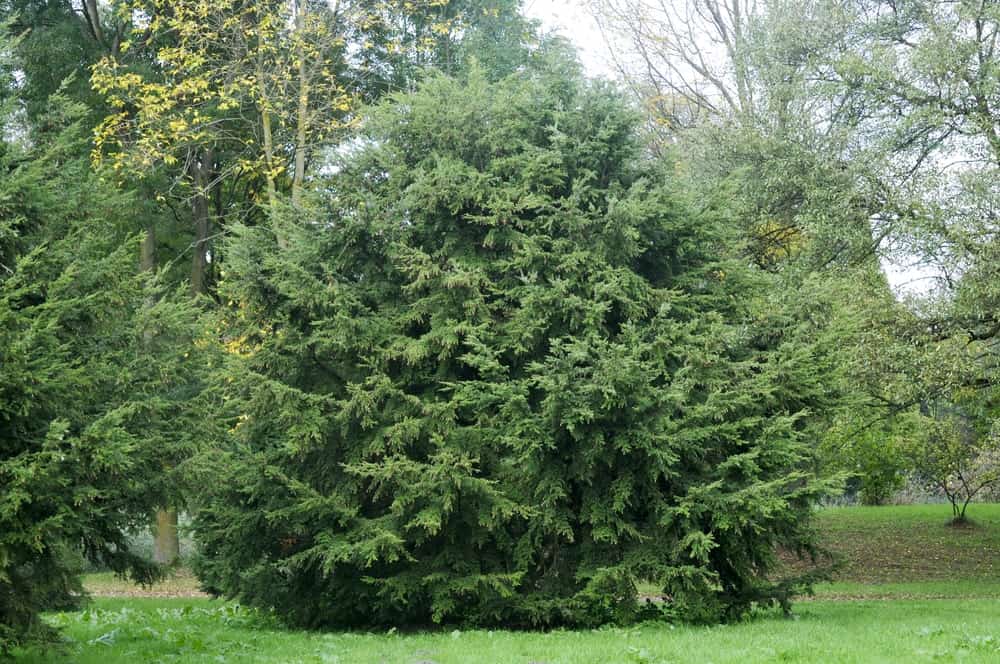 Tsuga sieboldii, popularly known as Southern Japanese Hemlock, is a coniferous tree that has the ability to grow up to 100 feet and develop a wide 8-feet trunk. Native to the South Korean island of Ulleungdo and the Japanese islands (Shikoku, Kyushu, and Honshu), this huge tree preferably grows on moist mountain ridges and slopes.

The flattened needle-like leaves, conical brown, scaly bark, hairless twigs, and pale brown seed cones are some of the most notable features of hemlocks. Like twigs and cones, it has boring white stomatal bands, covered with scales.

This multi-stemmed tree has a dense crown which is needle-like in appearance. It also rocks smooth and straight folds but as the young tree ages, it becomes flaky. Compared to other species of the genus Tsuga, the shiny, dark leaves of the hemlock are broader and denser, ranging from 0.7 cm to 2 cm in length.

Hemlock, including all its various species, is an important tree to both humans and animals as the tree is popularly used for medicinal purposes by many and is a crucial source of food and is also a habitat of small birds and mammals.