Find out all about the different types of heat pumps, how it works, its brief history, and even where to find such efficient alternatives to traditional heating and cooling. 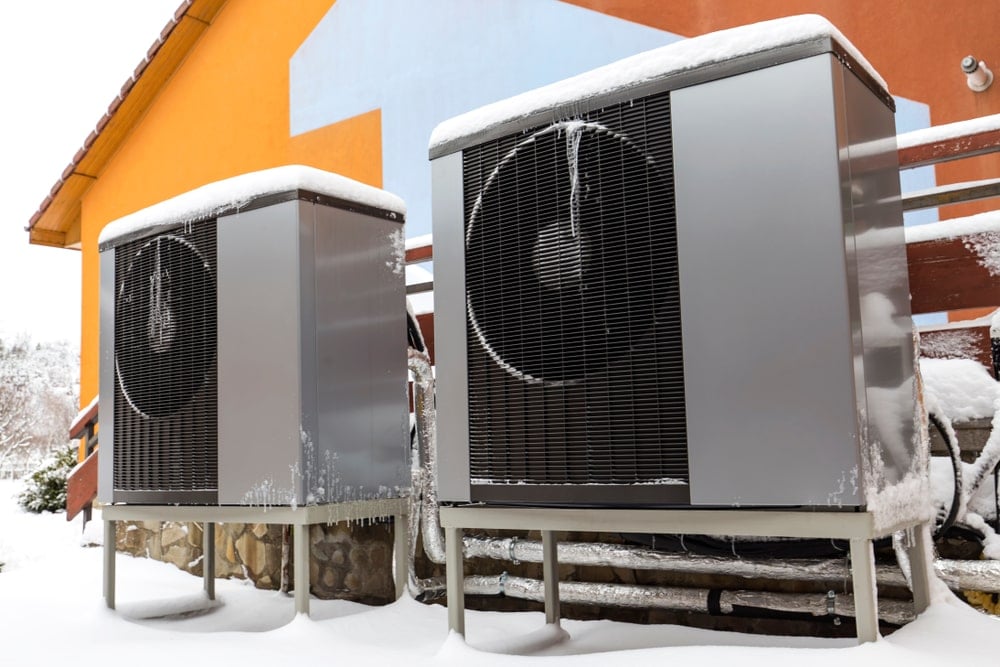 We all know that comfort is an important part of life. But the reality is, most of us have price constraints on what we can afford. In addition, concerns about the environment leave us looking for more efficient ways to insulate ourselves from the harsh external world.

The heating and cooling of our workplaces and homes are an important part of our lives. However, the impact of burning fossil fuels is becoming a huge issue that potentially threatens humanity. As such, an entire industry of people searching for alternatives is thriving.

While we wait for the cold-fusion heating systems of the future, there are some more efficient options available today. Heat pumps are one of the most promising options to traditional heating and cooling.

What Are Heat Pumps?

One way to reduce the energy costs related to this process is to tap into a nearby location that remains cooler in the summer and warmer in winter. In this way, the temperature may only need 10-15 degrees of change instead of 20-30 degrees. Heat pumps can accomplish this change by taking advantage of temperature differences between environments.

Take the case of the heating process in winter. A heat pump may use the warmer temperatures deep underground and move that heat from these sources into a home above ground.

This process still requires an external power source. Since temperatures underground do not vary as much as open-air, this process saves the power needed to heat the air.

How Do Heat Pumps Work? 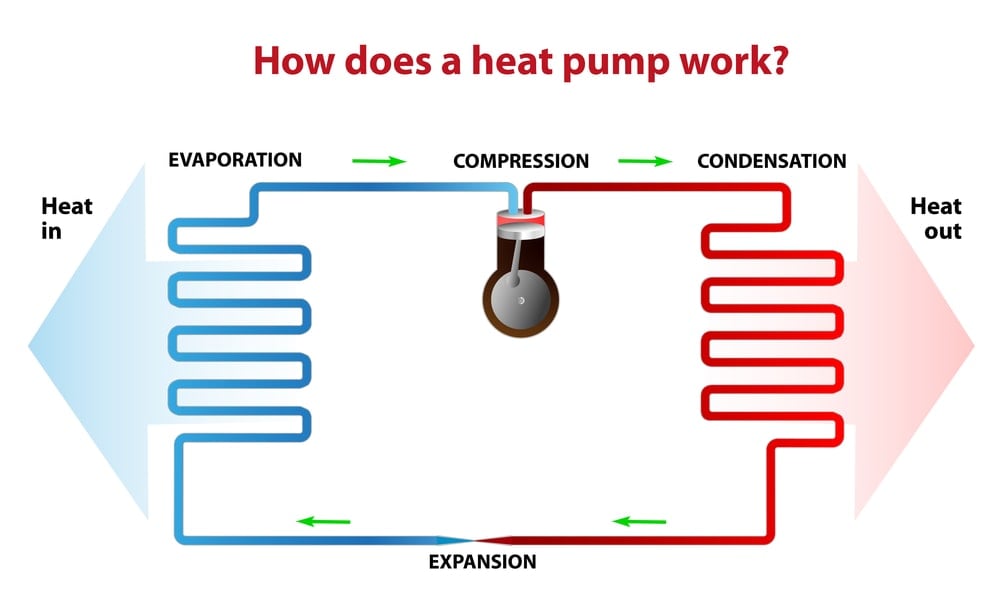 Basically, the system is designed to:

This is generally the process used by refrigerators and air conditioners. However, a heat pump could be designed to absorb heat from the warmer environment, and then release heat into the colder environment.

As alluded to above, heat pumps have their origins in the process of refrigeration. The first recorded refrigeration process was created by William Cullen in 1748. It took more than a century before Peter von Rittinger translated this technology into heat pumps by 1857. A second-century later, the Royal Festival Hall in London created the first large scale reversible heat pump.

In recent years, however, due to concerns about the environment, heat pumps are increasingly in use.

Where To Buy Heat Pumps

As mentioned above in the history section, heat pumps are no longer considered novel pieces of equipment. Today, heat pumps can be purchased wherever heating and cooling systems are sold.

Air-to-air systems are generally much cheaper and easier to install, however, they are the least efficient form of the heat pump. Underground or underwater heat pump systems are much more efficient. However, they will require extensive installation since they must be placed underground. They also require additional piping to move the refrigerant the longer distance.

In our modern heating and cooling industries, there are several kinds of heat pumps. This article will categorize them into three basic groups:

Before beginning the categorical breakdown, there are two other topics to mention. 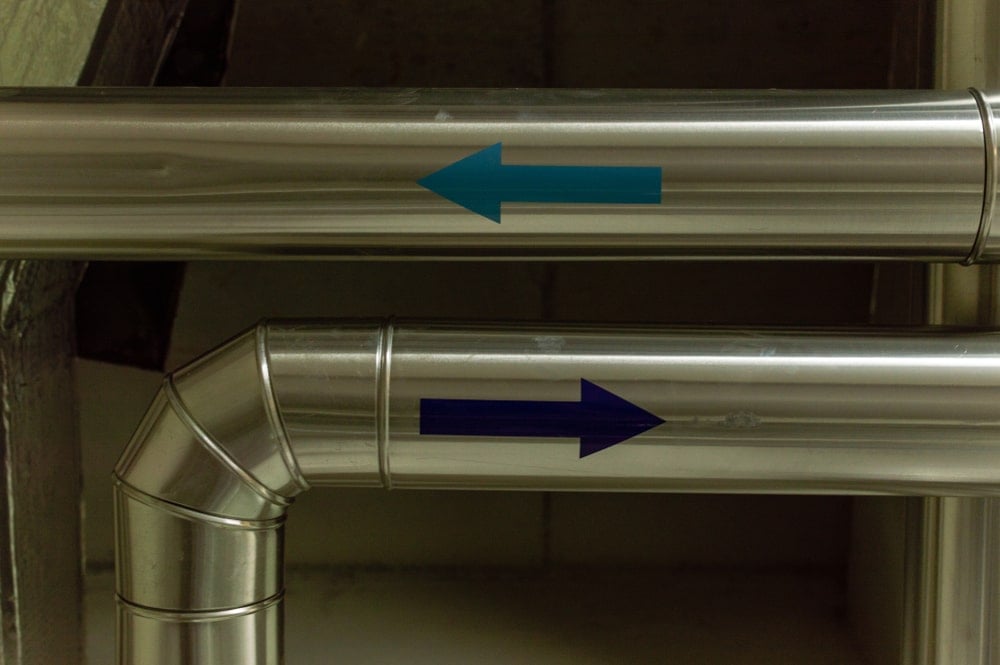 Most heat pump types are available with the reversible option. Local climate needs may determine whether you need a reversible pump or one that is designed only to heat the indoors. Since reversible pumps are also more expensive, costs may influence which system is best for you.

However, some systems need extensive installation, such as underground or underwater types. These systems require one half of the unit to be placed deep underground or at the bottom of a nearby body of water. It may be more cost-effective in the long run to install a reversible system to avoid reinstallation costs later on. 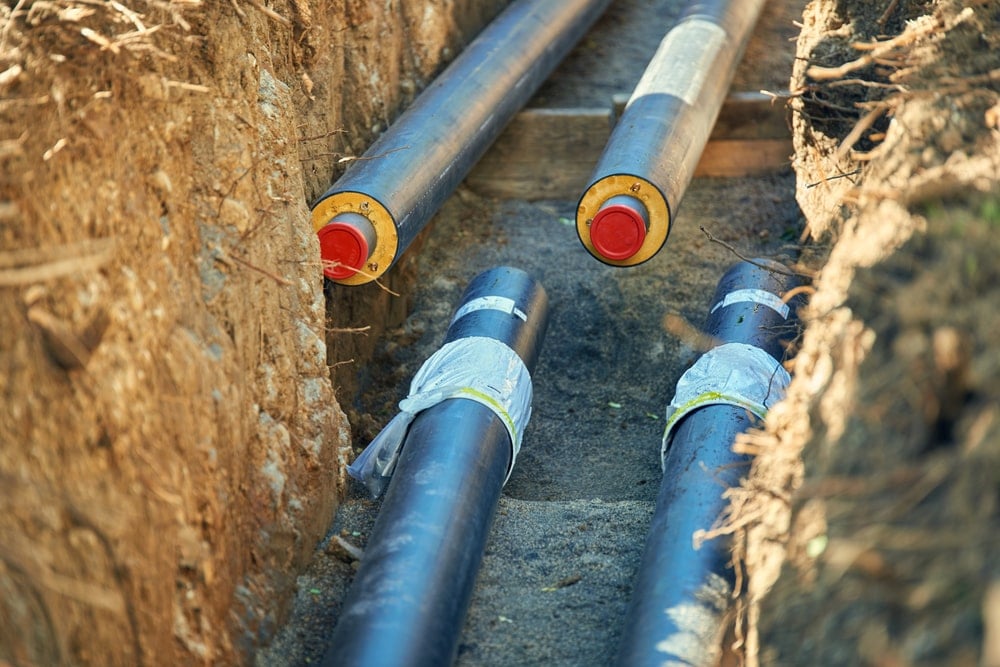 While not generally in use to heat buildings, solid-state heat pumps do exist. Magnetic-based heat pumps use the properties of strong magnetic fields on certain metals. The fields can tend to warm metals like Iron or Gadolinium up to 10 degrees Fahrenheit. If the metal is then placed into an environment without the field, it will release the extra heat into the environment. This process is not as energy efficient as systems using liquid or gas alternatives. 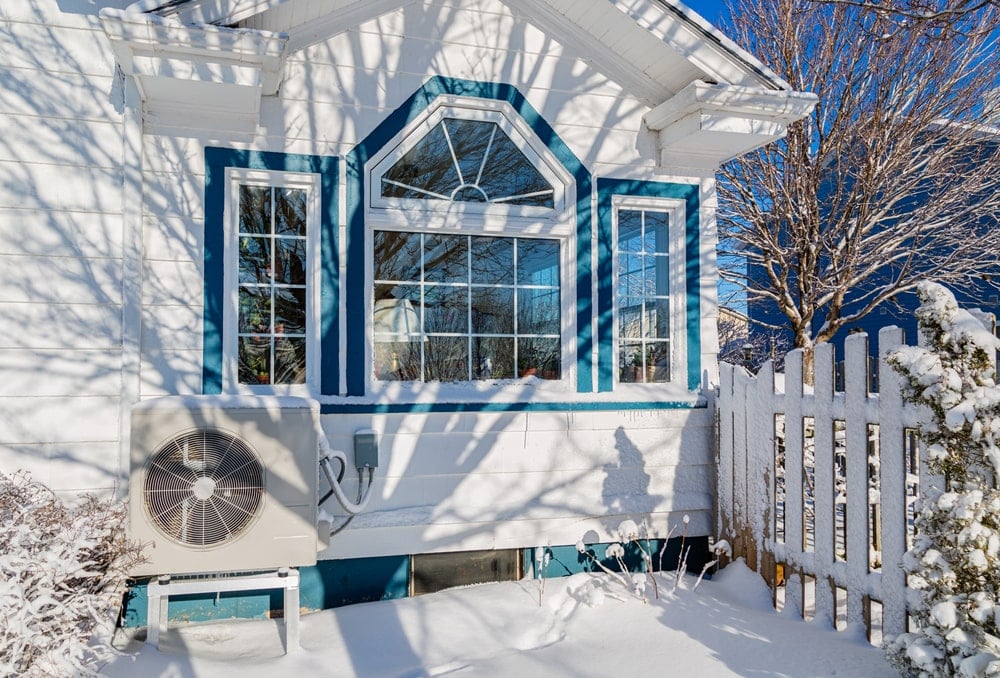 As the name implies, air to air heat pumps transmits heat from the open-air outside to the inside of the facility. They are available as reversible systems that can heat and cool indoor air. The most common systems include those using vapor-compression, or hot water for radiators or direct human use.

The kind using vapor-compression operates similar to refrigerators or air conditioners. They involve a unit placed indoors, and connecting pipes to a unit placed above ground outdoors. Reverse Cycle Chillers operate in a similar fashion as other air to air pumps, except they cycle water instead of another vaporized refrigerant. Once heated, the water can be moved through internal radiator systems.

Both air to air and radiation systems are generally more energy-efficient than other heating systems. They are also cheaper to install than other forms of heat pumps because they are above ground. Heat pumps can be safer for health since they do not involve the burning of carbon fuels. These substances can release carbon dioxide or nitrogen oxide as part of the burning process.

Air-sourced heat pump systems can be ideal for facilities in relatively temperate climates. They can provide sufficient heat in all but extremely cold weather approaching freezing temperatures.

Air to air heat pump systems does have a number of drawbacks. While they are great for temperate climates, they do not work well in climates with extremes. In freezing temperatures the heating capacity drops below tolerable levels. Most systems include a form of resistance or oil-based emergency heating. However, emergency heating is not cost-effective or designed for constant use.

Since systems are above ground, they can have problems with blockage. Leaves, grass, snow, and ice can all impact the airflow and internal moving parts. Above ground systems often require filters and defrosters.

Air-sourced heat pump systems can require more up-front costs than other space heating solutions. However, they can last twenty years or more and eventually save money in the long run. How long they take to recover upfront expenses depends on local electric and oil costs. 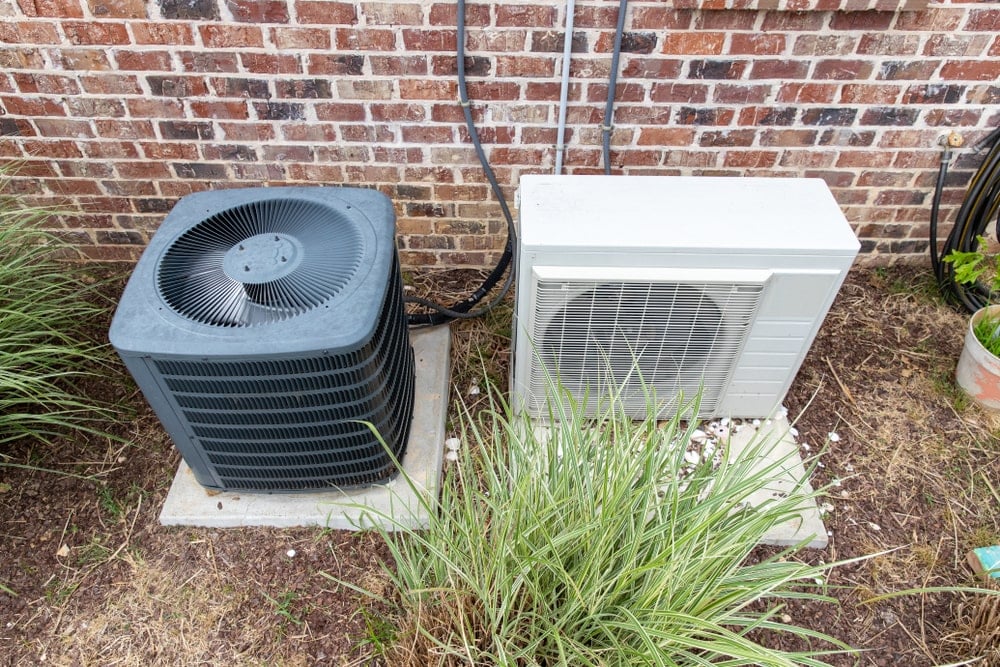 The mini-split heat pump is an air to air operation designed for houses that do not have ducts. They are generally favored in retrofits to buildings formerly using hot water heaters or radiators. Whereas traditional air-based heat pumps connect the external unit to the duct system, mini-splits use small openings cut into the side walls. The indoor units can be mounted on ceilings, walls, or the floor, up to fifty feet from the outdoor unit.

See also  How to Get Rid of Flies

While some people may find the visible tubing and indoor unit unsightly, mini-splits tend to be more energy-efficient than duct systems. Ducts are notoriously inefficient, often losing large amounts of heat before reaching the vents. 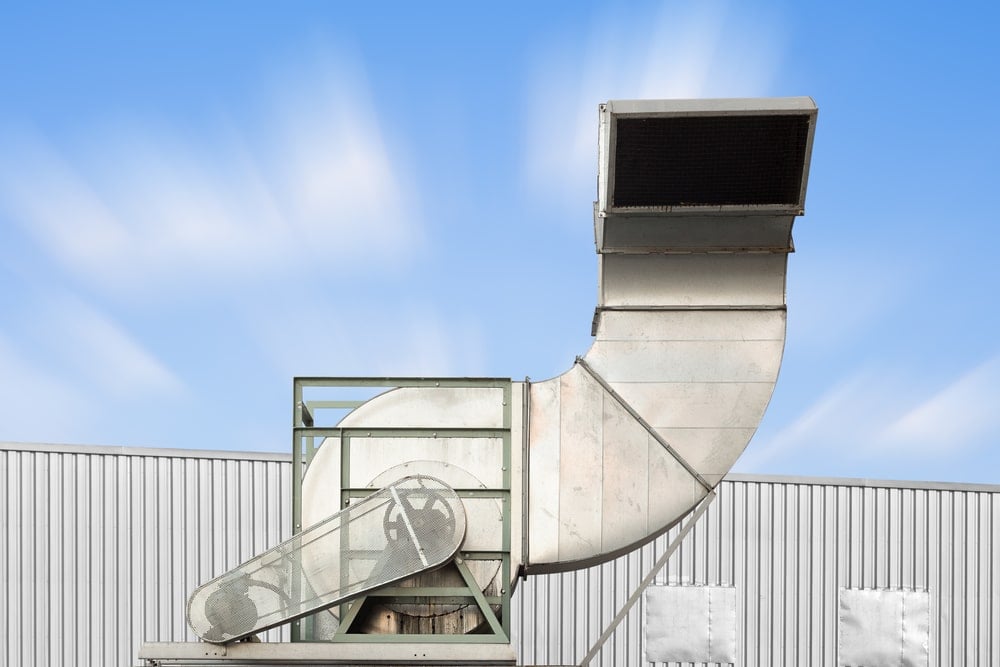 A final variant of air to air pumps is the Exhaust Air Heat Pump. As the name describes, this version uses the exhaust from a building or manufacturing process. Since the exhaust is typically warmer than the surrounding air, the same evaporation to condensation process can be even more effective. However, this process requires close access to consistent exhaust. 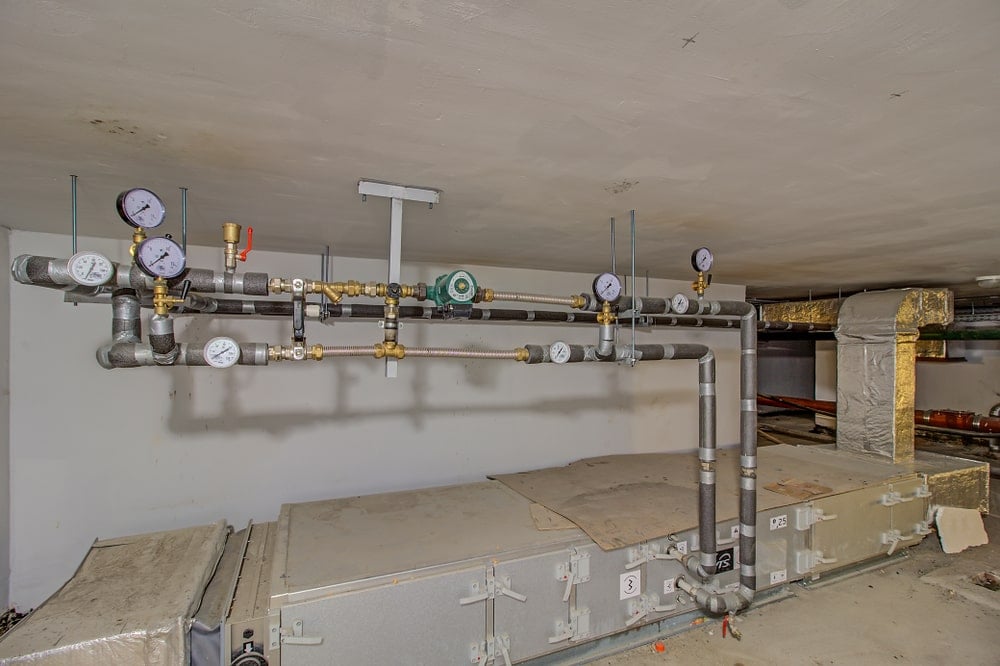 Temperatures deep underground and underwater do not vary nearly as much as those in the open air. Because of this reality, this category of pumps can more efficiently provide both warmer and cooler air. 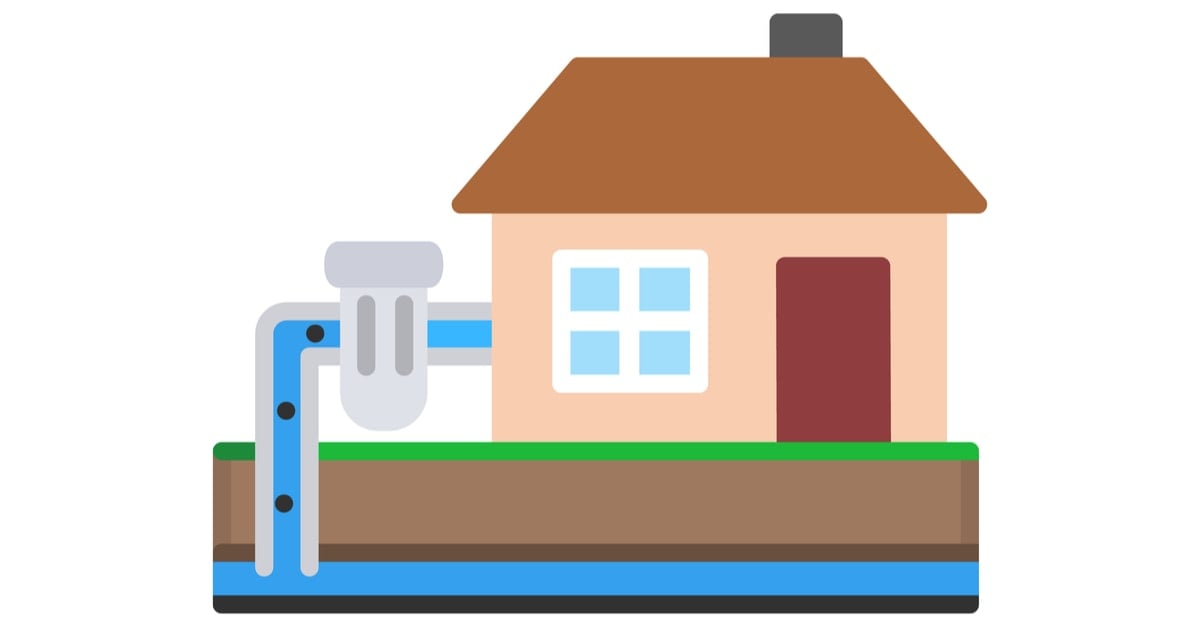 For structures close enough to deep water sources, underwater heat pumps may be an option. Water-based heat pumps work by a similar principle as air-based, except they use bodes of water as a medium for heat exchange. They absorb heat from the water to warm the inside of the structure and release heat into the water to cool the structure.

See also  Does Saran Wrap Work on Windows for Keeping More Heat in Your Home?

Some varieties also use water as a refrigerant, and water flows through a network of tubing as deep underwater as possible. The temperature of the water inside the tubing will be warmed or cooled until it reaches the ambient temperature of the free-flowing water. The water in the tubes is then pumped up into the structure. In the summer, the water will absorb heat from inside the facility, essentially cooling the structure. In the winter, the water will release heat into the colder interior.

Since temperatures deep underwater are relatively stable throughout the year, this system can be used in more extreme climates. This is a major advantage over air-based systems, which can only serve temperate climates.

Of course, the biggest drawback of underwater heat pumps is the requirement of being very near a body of water. While external wells can work, larger bodies with free-flowing water would be more effective.

Underwater systems can be closed loops or open loops. Much like the other varieties discussed, closed loops move a refrigerant through a closed pipeline. Open loops, on the other hand, collect open water into the system and move that water through the internal structure. Heat is then released or absorbed as necessary. The water is then released back into the environment in a different location.

Because this is dealing with plain water from the environment, this process carries the additional risk of mineral deposits inside the line. These deposits can interfere with the flow of water, and thus reduce the efficiency of the system.

See also  What is a Heat Pump?

Also called Geothermal Heat Pumps, these systems use the constant temperatures deep underground to heat or cool structures. Like deepwater pumps, these often use water as the refrigerant and do not require a condensation/evaporation process. However, standard condensation and evaporation varieties exist as well.

As with deepwater versions, the water refrigerant type uses a network of pipes deep underground. The water flows through the pipes, releasing or absorbing heat until it matches the ambient temperature of the ground. The water is then pumped into the above-ground structure to release or absorb heat as needed.

While deepwater pipes typically lay horizontally against the bottom of the water, underground types have a number of configurations. Where horizontal space is limited, pipes can lay in vertical loops. A number of deep holes are drilled into the ground. The pipes form a chain of deep vertical u-shapes. Each of the drill holes can be filled with groundwater or some other medium to better facilitate the temperature exchange.

Where there is more space, the pipes can be arranged in a horizontal network of u-shapes laying on a single plane below the frost line. The ground can be excavated and then replaced to cover the pipes.

Horizontal pipes can also be arranged radially, with a process called horizontal directional drilling. This process is favored because it can be installed without disturbing driveways and other surface features. 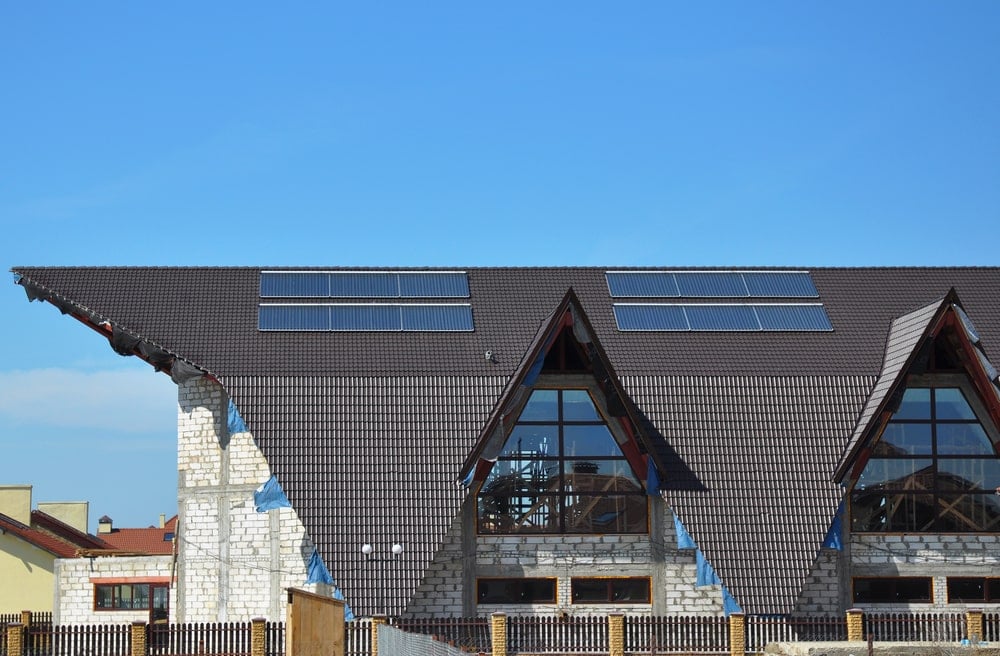 See also  What is an Allen Wrench?

Accordingly, a number of hybrid heat pumps exist to assist in the heating process. These pumps operate as air-source pumps that use additional energy sources to provide extra heat to be released indoors. Examples include: