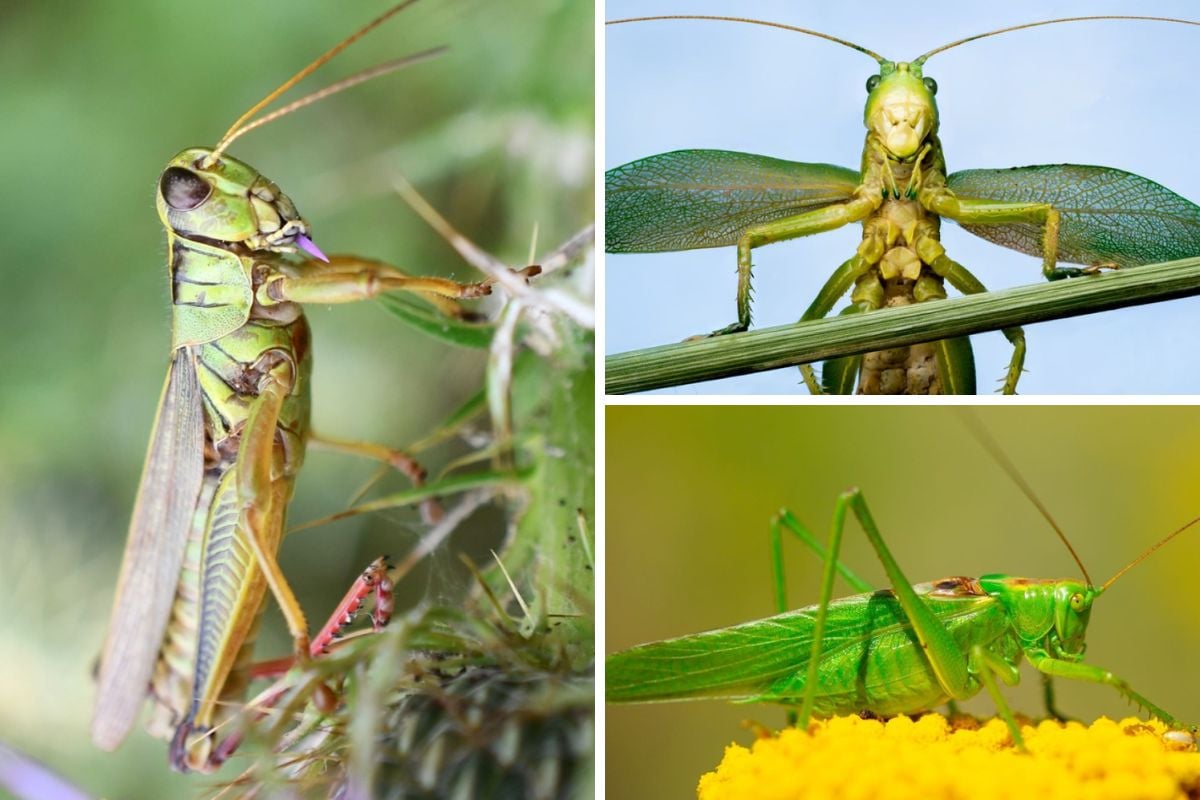 When we think of grasshoppers, nostalgic childhood memories usually kick in: searching for the source of chirping sounds on a warm summer day, trying to catch them with friends.

But while they are associated with pleasant times, most of us actually know very little about this common insect.

There are over 8,000 grasshopper species that trace their origins back millions of years.  They possess large hindlegs and two wing sets, with long and slim forewings. They have both simple and compound eyes, with short antennae, that helps them scan and sense objects around them.

How Big are Grasshoppers?

Primarily active during the day, grasshoppers range in size from one to seven centimeters in length. Females are larger in size than males. Females also have a pointed tip at their abdomen, an ovipositor, that helps them lay eggs underground.

Males have wings which they rub with their hindlegs to produce sounds. Each grasshopper species has its own song recognizable by other members of the species.

Grasshoppers can leap 20 times the size of their body and thy can also fly eight miles per hour. Some male species have bright-hued wings which help attract their female counterparts. The bright color also keeps predators away as it signals that they may taste foul.

Grasshoppers are found in warmer regions. The majority of them feed on plants — flowers, leaves, seeds and stems. However, not all grasshoppers are the same and that is why we have composed this blog post.

Anatomy of a Grasshopper 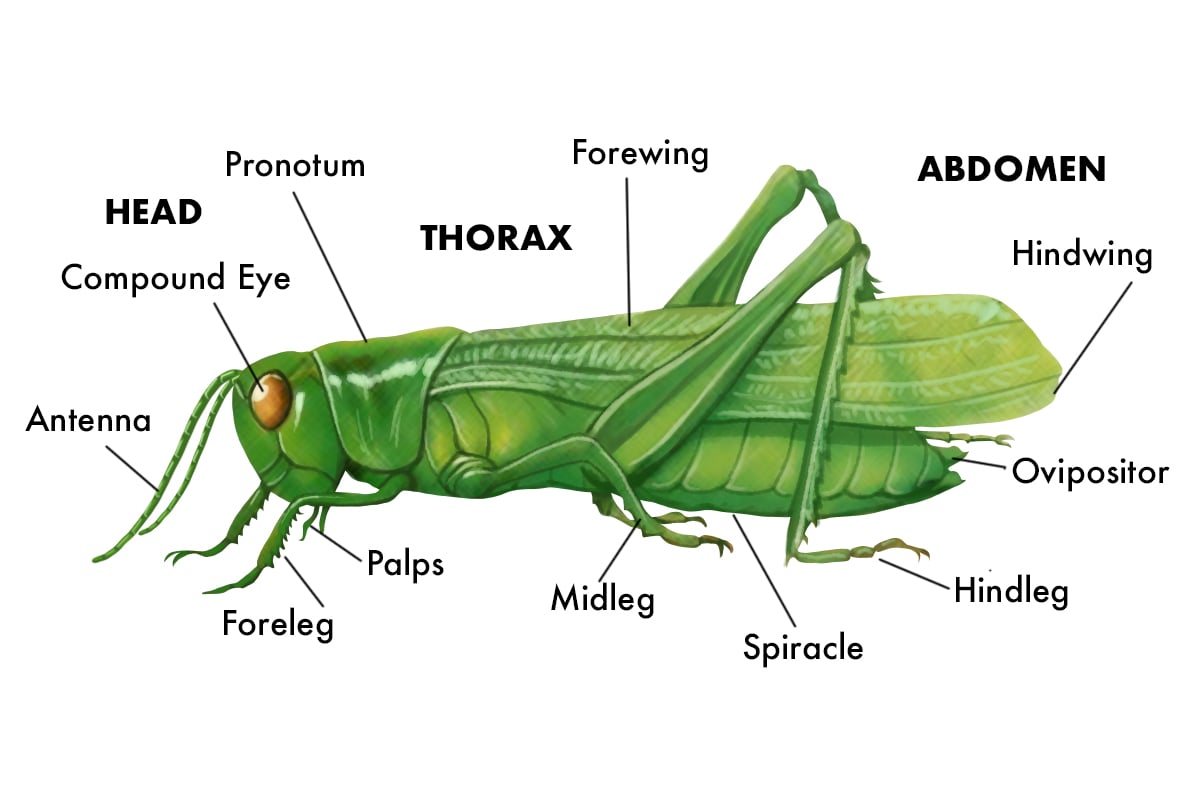 Grasshoppers are divided into two groups according to the length of their antennae:

Formerly known as bush cricket, long-horned grasshoppers belong to the family “Tettigoniidae” and order “Orthoptera.” This type of grasshopper consists of approximately 6,000 species of insects and is identified through their long horns.

These species possess slender antennae that can be camouflaged easily, according to different circumstances. The antennae become active during the night and tend to create noise.

Almost all the members of this family are green in color, possess long wings, and prefer trees, shrubs, and bushes as their habitat. What sets these grasshoppers apart from others is their tympanum — a hearing organ — situated on their front legs.

Studies show that their antennae are hairy and are as long as the overall length of their body.

When it comes to the females, they feature a pointed ovipositor (that helps them in laying eggs) and long wings in a different shape. On the other hand, the male species of this family are known for producing a song by rubbing their wings together.

This activity helps them attract their female counterparts.

An interesting fact is that all the species have their own exclusive song. Long-horned grasshoppers come out in the open during warm seasons. In winter, they remain in their egg stage.

Below you will find the following: 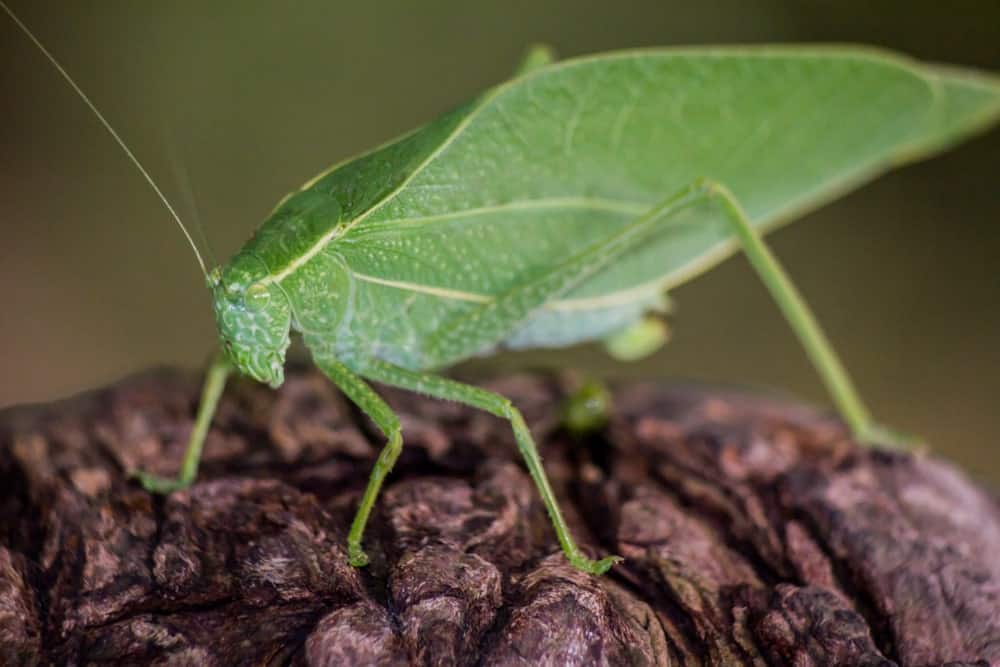 Often referred to as long-horned grasshopper or bush cricket, Katydid are known for their huge hind legs, extremely long antennae, and a thick, curvy ovipositor.

Scientifically known as Pterophylla camelifolia, Katydids sing a song “katy-did, katy didn’t” for which these creatures are named after.

While this is a common song often heard from katydids, each of the species has its own unique rendition that they produce through stridulation and rubbing their wings at the same time.

The most common instances where you will hear katydids sing is when they are reproducing or are in a defensive mode for protecting their territory.

Katydids range in size from one to six centimeters. However, the all-female matriarchal katydid (Saga pedo), found in southern Europe and western Asia, can grow up to 12 centimeters in length.

No males are known to exist among this species which reproduces asexually. While katydids display a bright green hue, some of these species are in pink and yellow, as well. Bush crickets also happen to be poor flyers, some of them lacking wings entirely. 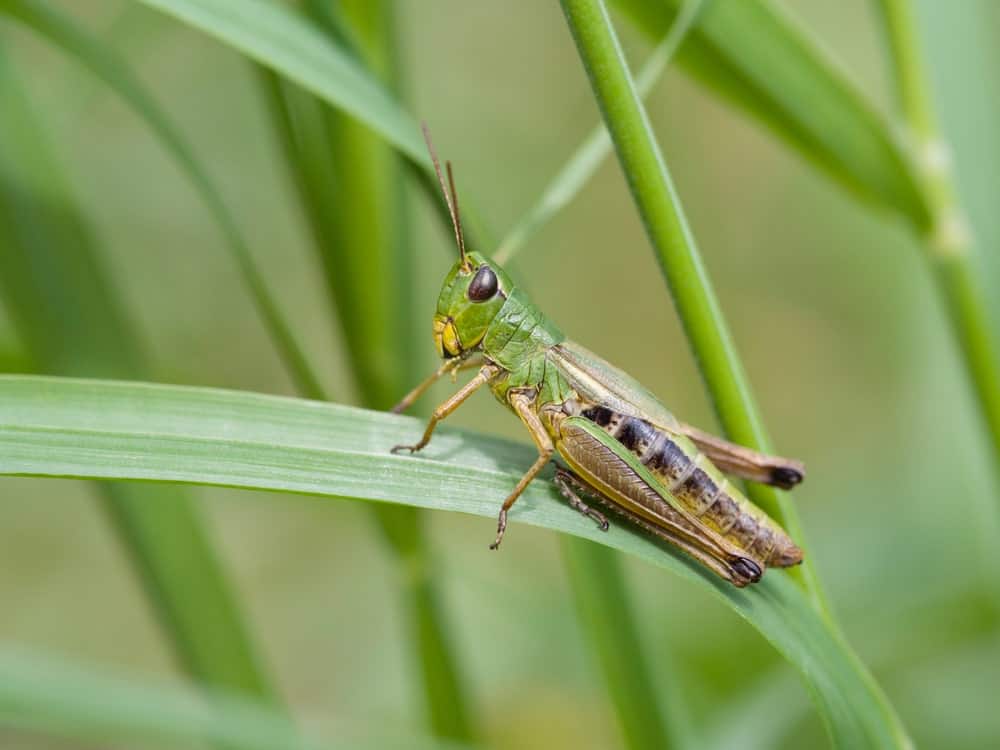 Also belonging to the family Tettigoniidae and subfamily Conocephalinae, meadow grasshoppers are small to medium in size and are typically found near water bodies (streams, ponds and lakes), meadows and pastures.

Meadow grasshoppers develop into many stages; initially, they are wingless nymphs (from April to May) and then they turn into winged adults in June.

As they grow older, they shed off their exoskeletons and prefer to feed on plants and grass, especially underwater.

Unlike Katydid, meadow grasshoppers make an “rrrr” sound during mating with their female counterparts. Green in color, with brown or purplish grey hues, they also exhibit grayish-brown stripes around their eyes. 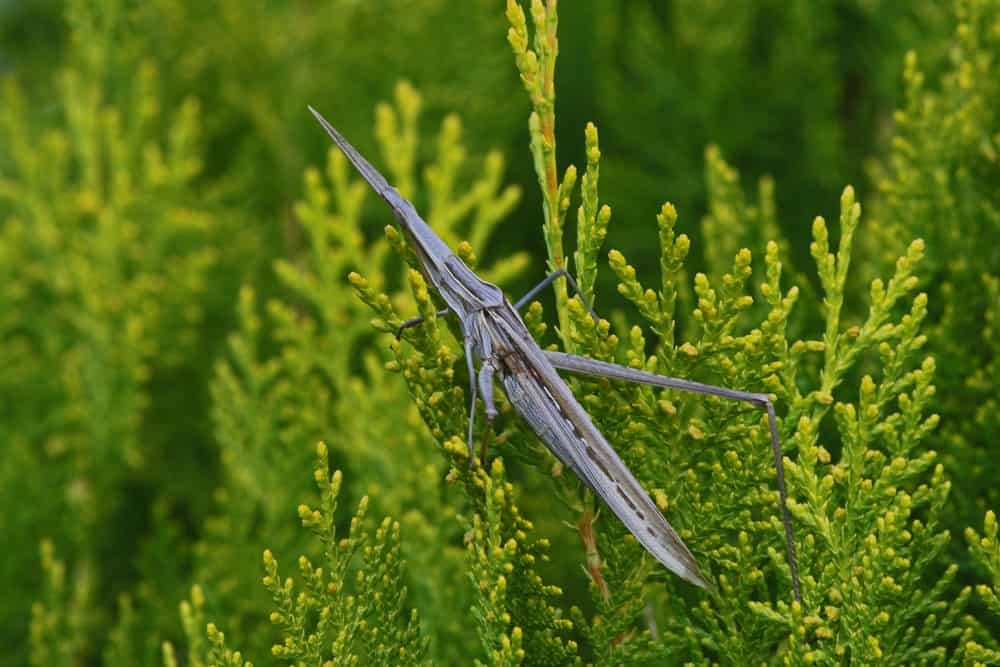 As suggested by their name, cone-headed grasshoppers have a pointy cone-shaped head. They are identified by their light-green or brown slender bodies that can be up to four centimeters in length. They can bite with their strong jaws. This species prefers to live in grasslands or weeds.

Like other types of long-headed grasshoppers, cone-heads also have a specific song. Their song is comprised of only one note which is repeated over and over again to produce a melody.

For example, a North American cone-headed grasshopper — N. robustus — creates a constant buzzing sound along with droning noise through their wings.

These species are typically found in warmer regions of southern and central Europe. Their two subfamilies are as follows: 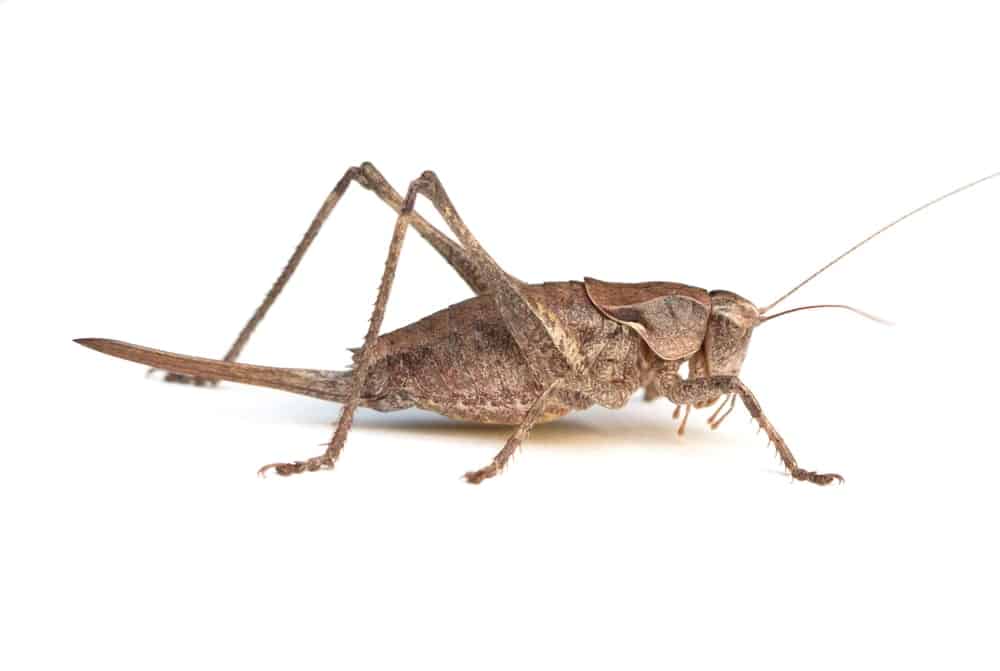 This grasshopper with a long tail is the shield-back katydid and they closely resemble crickets. Ranging in size from 18 to 50 millimeters they are usually black or brown, although they can be green, as well. Generally, shield-back katydids possess short wings or no wings at all and are unable to fly.

This species is found in western North America in open country, forests and farmlands. They are active in summer and early fall and go into hiding in winter. Shield-back katydids feed on other insects (both dead and alive) and plants.

Belonging to the family Acrididae and insect order Orthoptera, short-horned grasshoppers have short but heavy antennae. The females possess a four-valved ovipositor to help lay an egg and three-segmented tarsi.

Short-horned grasshoppers typically range in size from five to 11 millimeters. They have green or straw-hued bodies and long hindlegs and femurs that help them jump great distances.

Not all of the species come with wings — some lack wings and are flightless in nature. The winged male species make noises through the rubbing of their front wings. 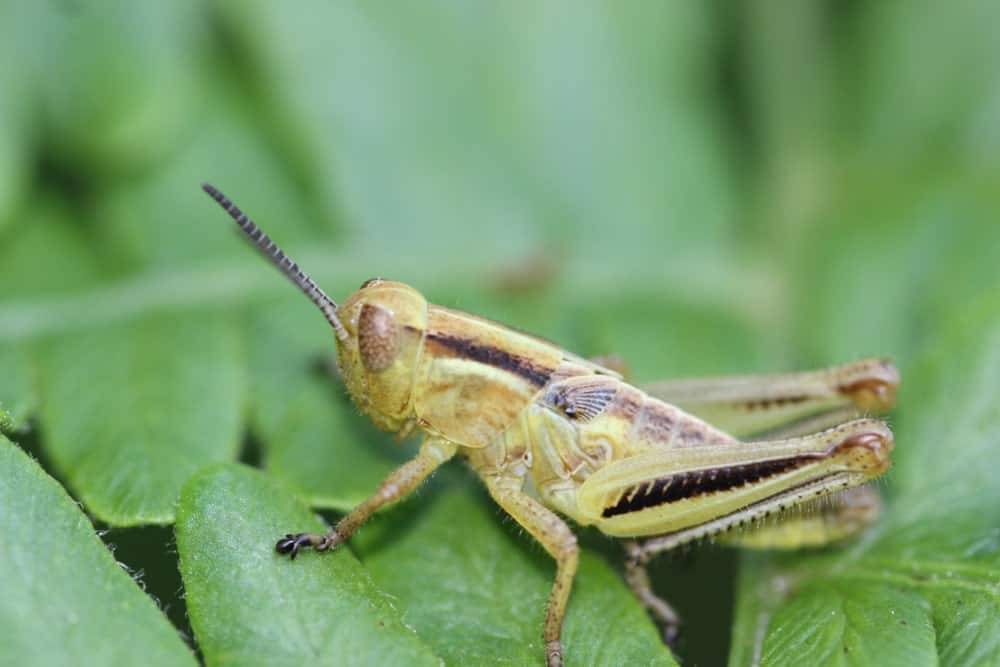 These are the most popular species of grasshoppers in North America. They come in a wide range of colors including brown, red, green, yellow, and orange.

Some species exhibit a bright range of hues with small spots all over their body and small and slender antennae on the top of their head.

The females lay as many as 20 eggs in the soil and sit over them throughout the winter season. The nymphs mature in the early summer and remain in the out in the Southern states.

Generally, spur-throated grasshoppers are seen in open fields and meadows, flying from one place to another.

These species can easily cross their boundary as they may fly as far as southern Canada and the United States. These destructive species come in many types, some of them are mentioned below: 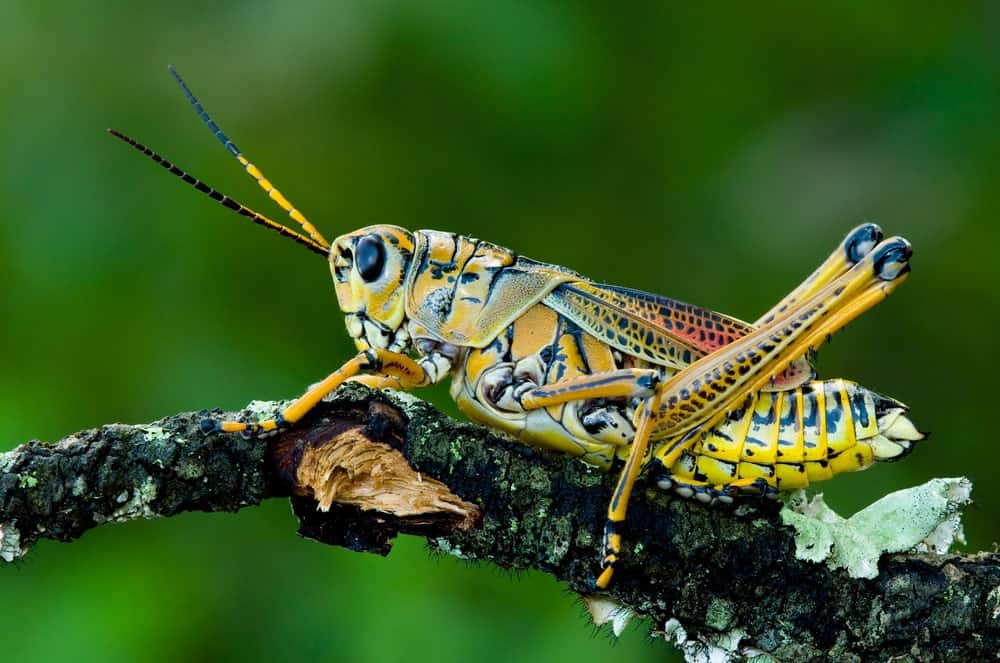 These large grasshoppers is well-known in the southeastern USA due to their large size and attractive body hues. One state where lubber grasshoppers are found in abundance is Florida where they are notorious for destroying vegetable crops.

Unlike other types of grasshoppers, lubber grasshoppers are slow and clumsy. They prefer crawling or walking over flying. Owing to this attribute, they are aptly named “lubber” as the word is derived from Lubber” which means lazy in old English. 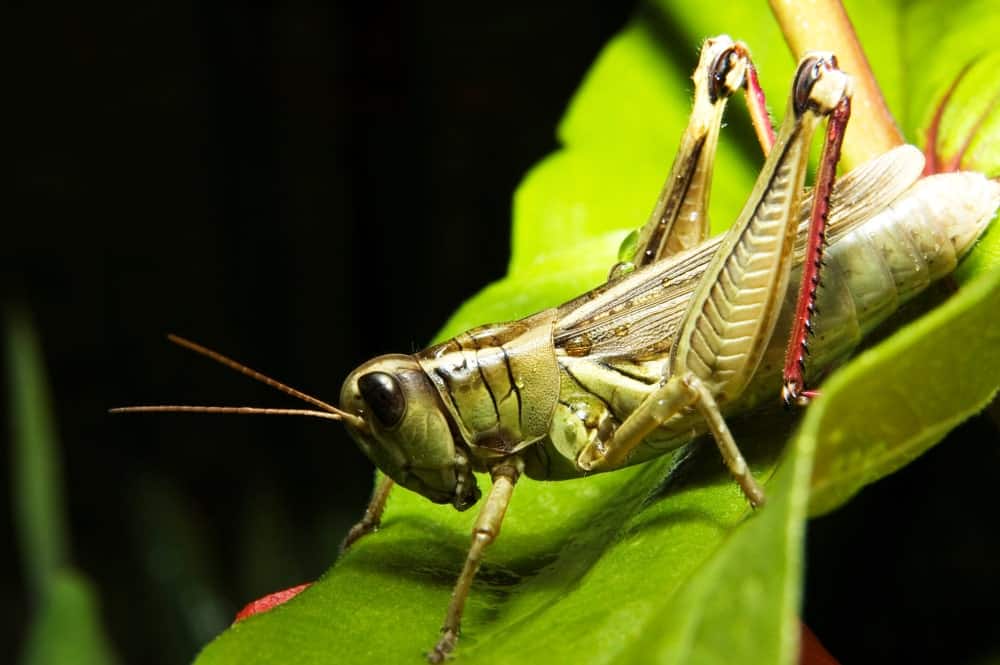 Belonging to the family Acrididae and order Orthoptera, locusts can be found worldwide. These species can be seen in great numbers as they move in swarms to faraway lands in hope of causing destruction.

Locusts are solitary in nature but certain changes in their mood and habits can make them gregarious. These species begin to breed heavily and grow in dramatic numbers. Wingless nymphs mature and then become swarms of winged creatures.

The adult species rush toward the vegetation growth and aim to destroy them instantly. These are one of the fastest flying grasshoppers, having the ability to cover long distances. Moreover, locusts like to feed on green vegetations wherever they settle. 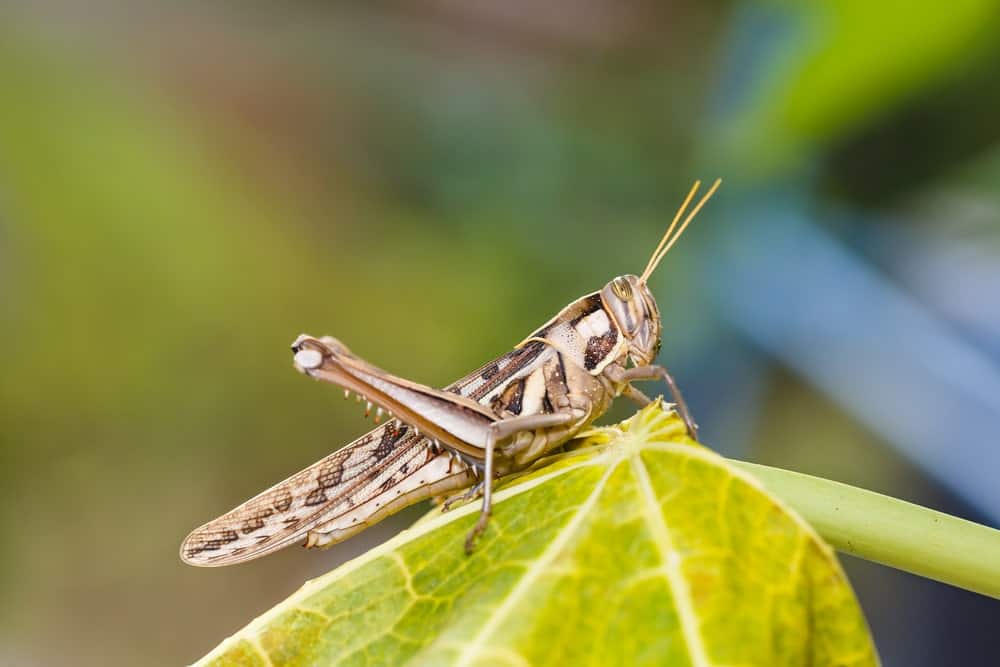 They are a serious threat to crops, as well as to grasslands, and can cause extensive damage to vegetation.

As the name implies, migratory grasshoppers disperse and migrate to different parts of the land. Research shows that the urge to migrate is genetic and they move on a regular basis. 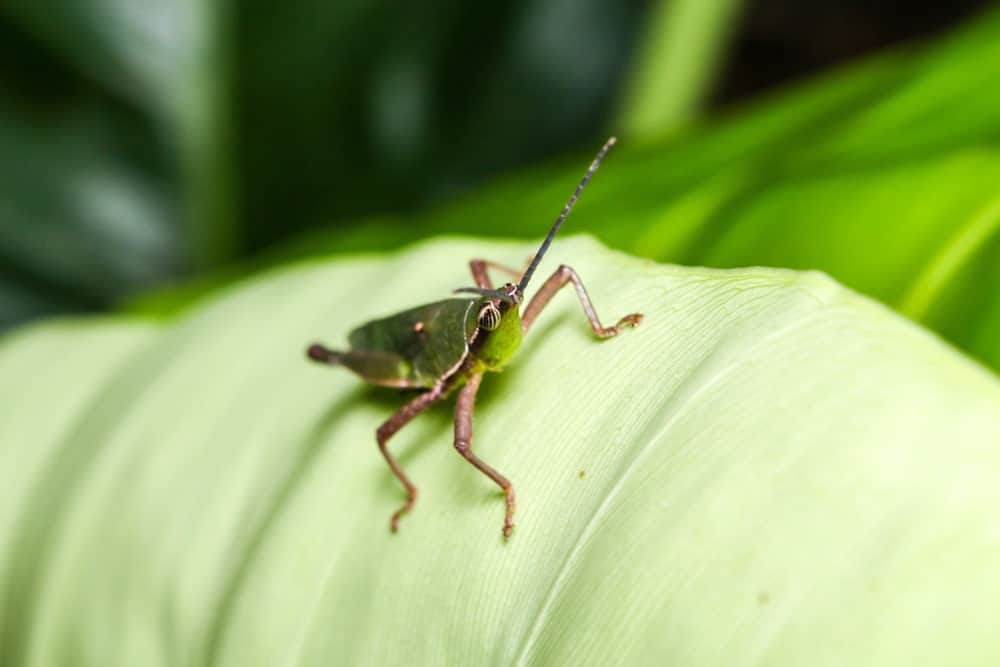 The slant-faced grasshoppers hail from the subfamily Acridinae and are distinguished by their slanted face and hindwings. This species can be found around wet meadows and marshes. They are usually found in small numbers and cause little to no damage to vegetation. 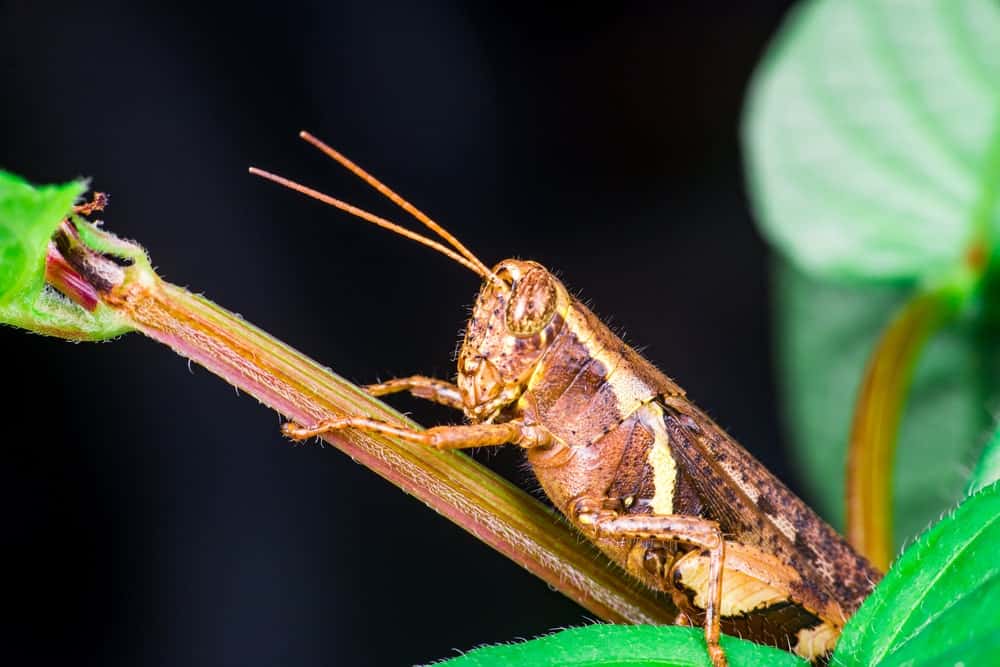 A part of the subfamily, Oedipodinae, band-winged grasshoppers display colorful hindwings in hues of red, yellow and black. They are the only kind of short-horned grasshoppers that have the ability to produce sounds, creating a crackling noise when they fly.

When they are not flying, they cover their hindwings with their forewings which helps to blend them into their surroundings. When threatened, they expose their wings. Due to the colorful designs, many predators mistake band-winged grasshoppers for butterflies.

One of the most common band-winged species includes the Carolina grasshopper, which has black hindwings. 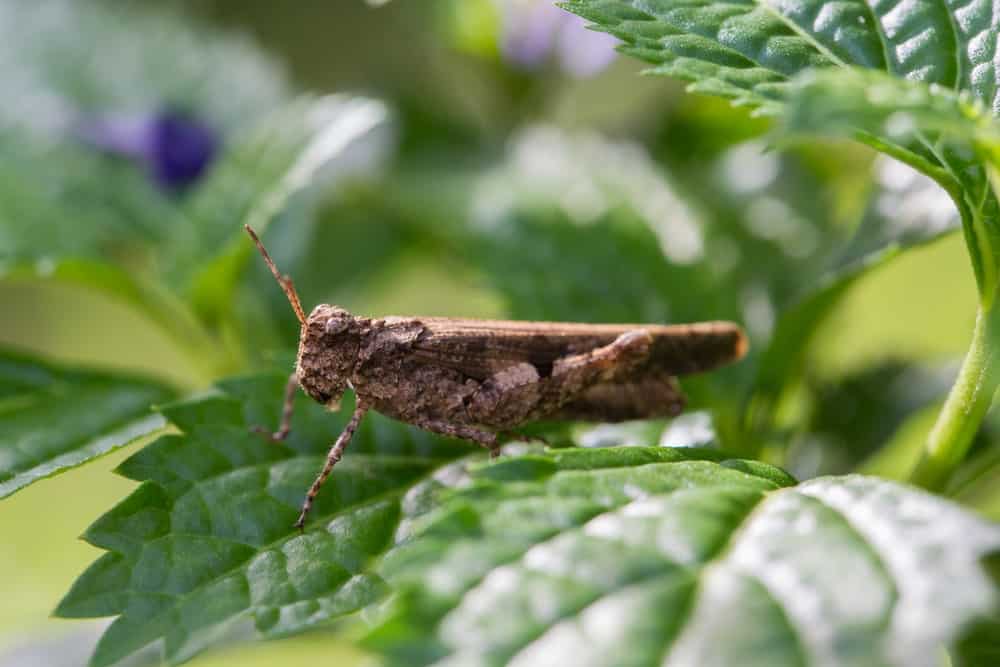 Pygmy grasshoppers make up the second-largest family (Tetrigidae) of grasshoppers — 1600 species in 226 genera. Also known as grouse locusts or groundhoppers, pygmy grasshoppers are small in size and appear in colors such as brown, green or gray.

The species either has small-sized forewings or none at all. They also lack sound-producing or hearing organs, which is what makes them distinctive from long-horned and short-horned species. They are commonly found near water and in tropical forests.

Grasshoppers are active species that stay up during the night. When they are threatened they may spit out a brown liquid as a defensive mechanism.

The nymph may consume the grasshopper as a result. Besides flies, some common predators of grasshoppers include birds, mice, snakes, beetles, and spiders.

How long do lubber grasshoppers live?

These grasshoppers will shed their exoskeletons about five times before they reach maturity and females can produce 30 to 50 eggs per clutch.

This specific grasshopper species is considered a pest in the south and the southeastern regions of the United States, particularly in states like Alabama and Florida, because it destroys crops and vegetation during the swarming season.

Can grasshoppers bite or sting?

No, grasshoppers aren’t really known to bite or sting humans or animals. However, when they are swarming in large numbers, they will bite virtually anything that’s directly in front of them.

Some species of grasshoppers have been known to bite humans if they feel threatened, but overall, this hopping insect won’t typically bite or sting another living creature (except plants, of course).

Grasshoppers are not poisonous, so there is no danger to your health if you are bitten by one.

Home Expert (Bot)
Hello, how are you? Ask me anything about interior design, home improvement, home decor, real estate, gardening and furniture.
180 shares