Gooseberry is in the same family as black currants, they're flowering bushes. We rounded up some varieties of gooseberry, read this article and find out. 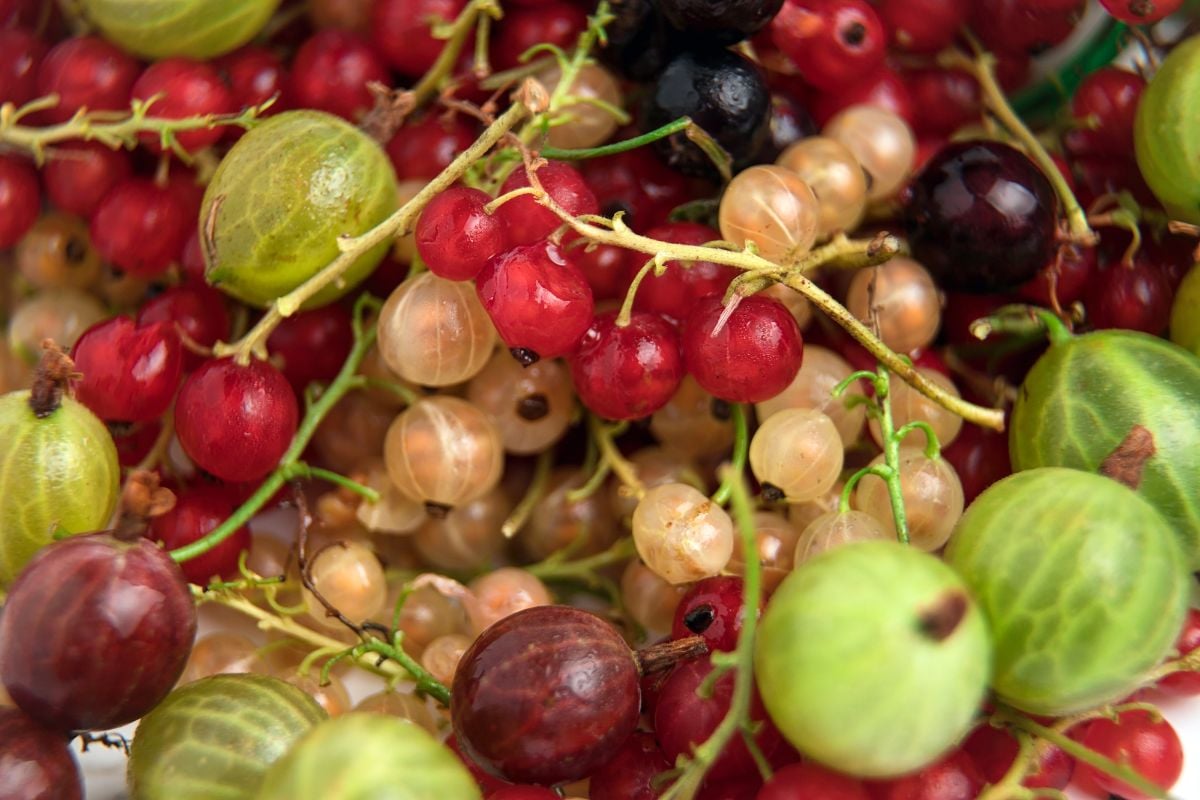 Having recently come to live on 23 acres of land in the Midwest, I’ve been looking for new things to grow, freeze, and can.  We’ve planted apples, cherries, blackberries, and raspberries. Now I’m starting to look at slightly more exotic or less well-known berries.

Thus, I wondered if gooseberries were more than just a literary insult!  I found out they are and hope to grow some starting this year.

What Is a Gooseberry? 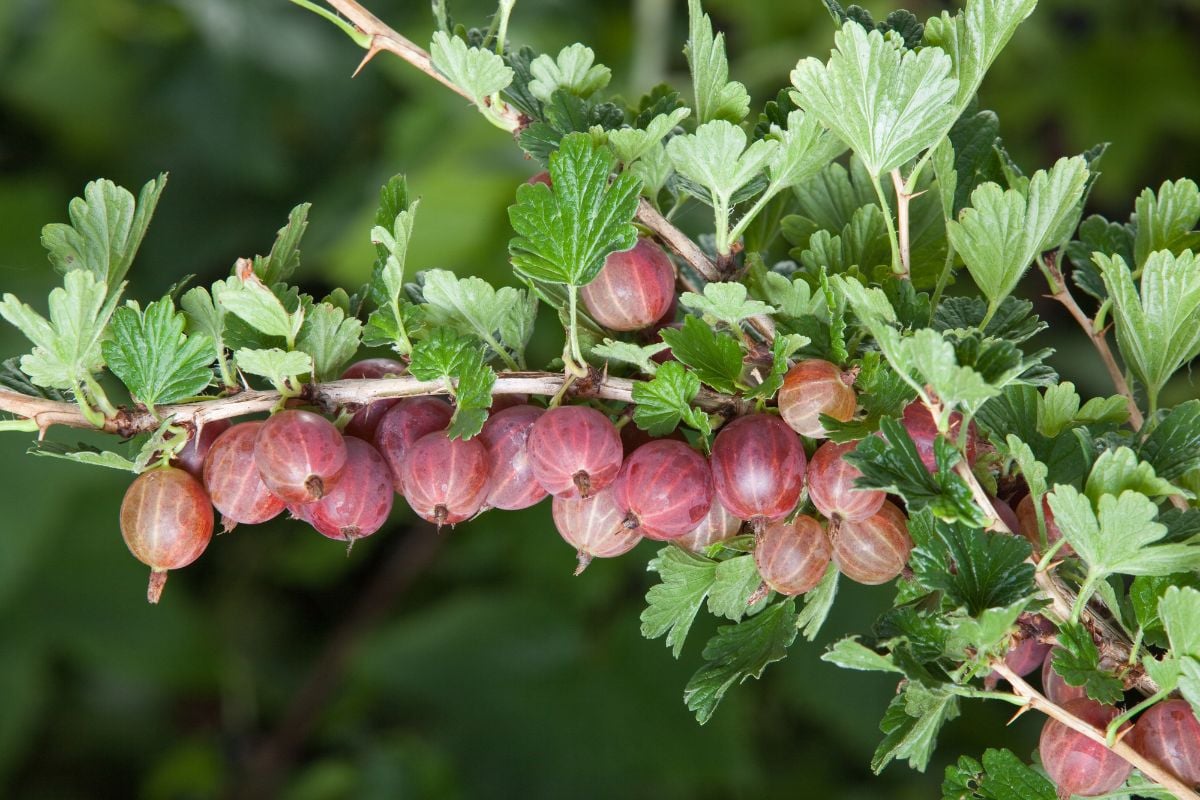 A gooseberry is a flowering shrub or bush in the same family as black currants.  They produce rows of red or green fruits that look like tiny grapes.  There are two main kinds of gooseberries:  the European Gooseberry (Ribes uva-crispa) and American (Ribes hirtellum).

The European gooseberry (Bertie Wooster leaps to mind) is native to North Africa, eastern Europe, and western Asia.  They are cultivated for their flavor and come in several varieties.  The American berry is native to the northern half of North America.

American gooseberries are usually smaller and less flavorful than European berries but tend to be more disease and pest-resistant.

Like black currants, gooseberries are high in antioxidants and help control blood sugar levels, and can reduce the risk of Alzheimer’s and stroke.  They can be eaten raw, but most varieties are tart enough to make cooking the preferred method of serving.

If you’re thinking about growing gooseberries in the United States, be sure to check your state law.  In 1926, various U.S. states prohibited the growing of Ribes plants, including currants and gooseberries, because they served as hosts for white pine blister rust.  Some states still prohibit cultivating gooseberries altogether, while others require a special permit.

Among the U.S. states which prohibit or require a permit for one or both are Delaware, Maine, Massachusetts, Michigan (permit only), New Hampshire, New Jersey (permit only), North Carolina, Ohio, Rhode Island, Virginia, and West Virginia.

Some states that generally prohibit growing Ribes do allow some highly resistant strains.  So, assuming you still want to grow them and can, let’s look at some available varieties. 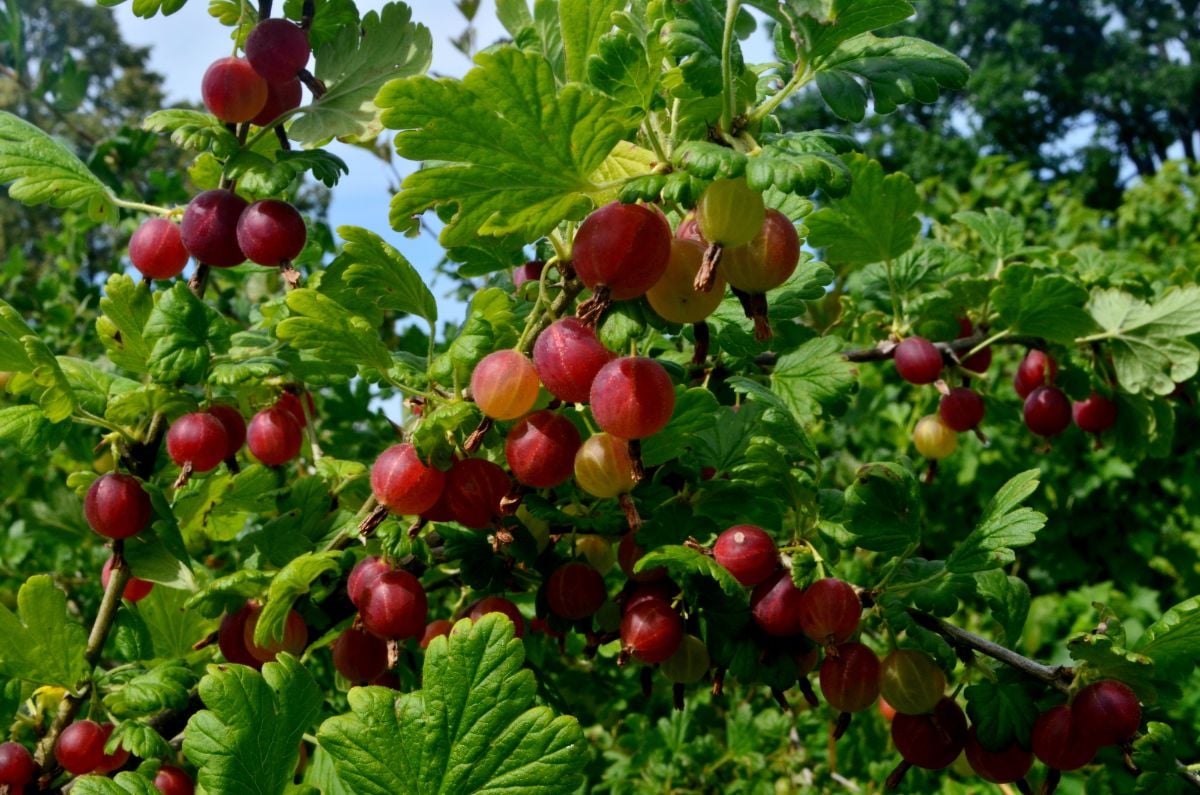 The Achilles is an excellent European variety deserving more attention from growers.  It produces small ruby-red fruits with high sugar content and a good dessert flavor for fresh eating.  It also works well for all cooked preparations.

Moderately vigorous and easy to grow, the Achilles produces a profusion of fruit ripening in late June.  It is a spreading bush with some susceptibility to mildew. 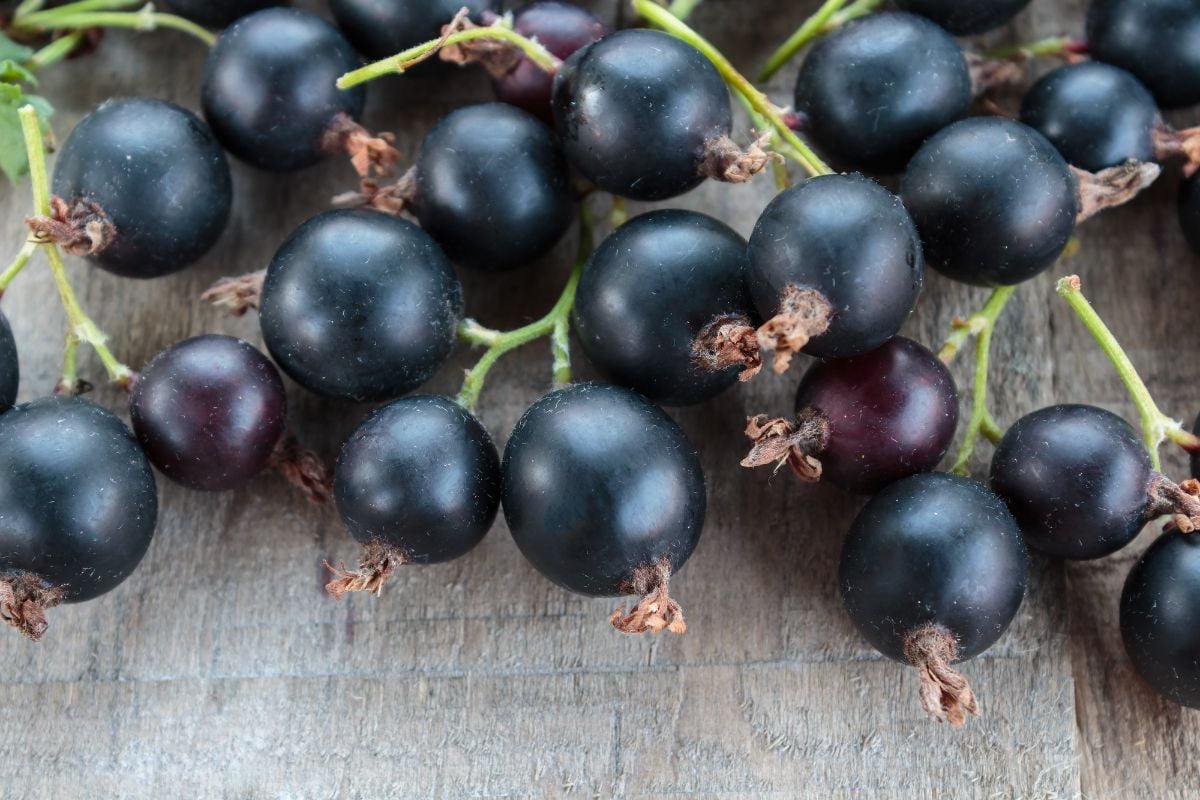 The Black Velvet is a hybrid with few spines that produces vigorous growth and small but abundant fruit, ripening to an almost black red color and very sweet. 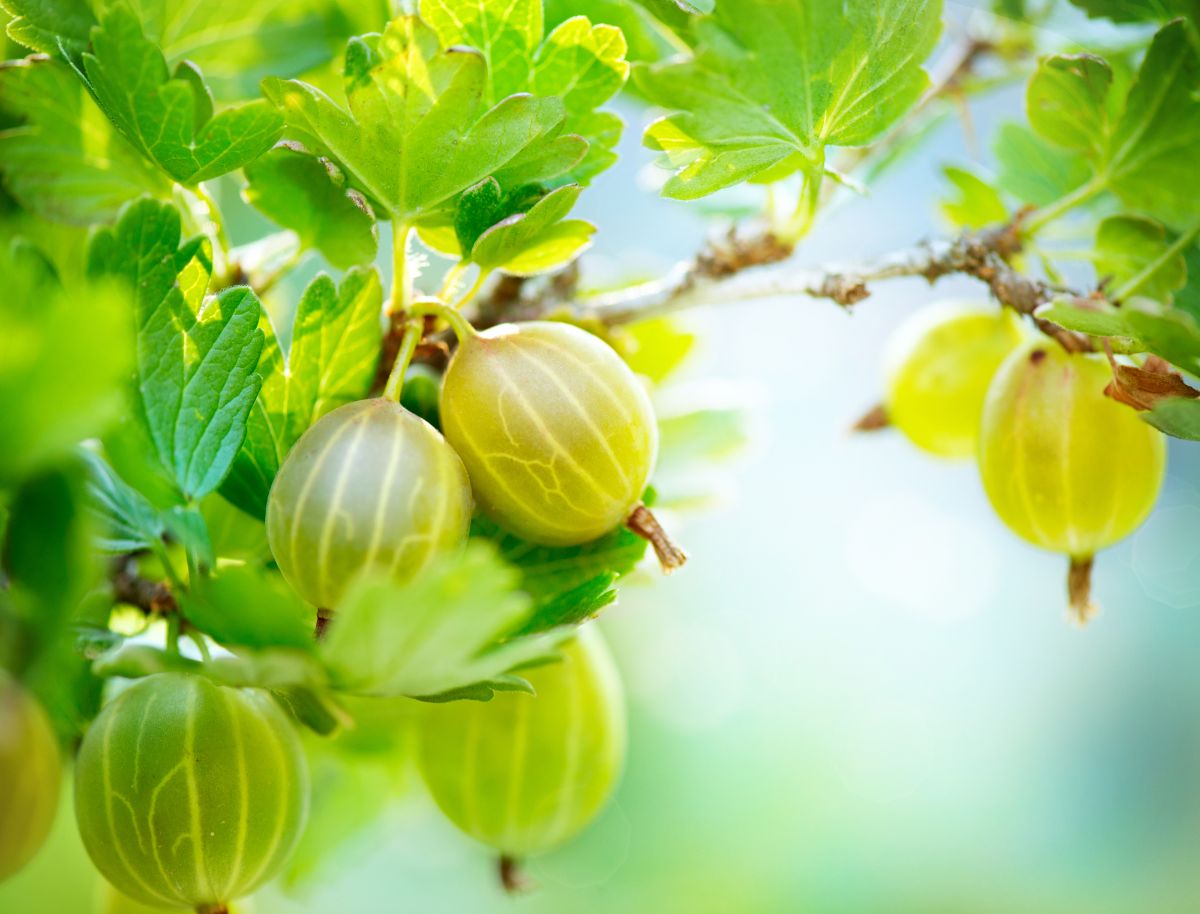 An outstanding variety, the Broom Girl ripens to a pale yellow and superb flavor.  The fruits are oval rather than round and can be picked in mid-June. Although an order variety, the Brook Girl is still worth growing.

With reduced thorns, the Captivator produces delicious large red or pinkish berries.  It is disease resistant and is not susceptible to white pine blister rust or powdery mildew.

Careless delivers large green fruits of excellent flavor outstanding for all cooking purposes, including jams, jellies, and pies.  The bush produces a very heavy crop and will grow well in all soil types. 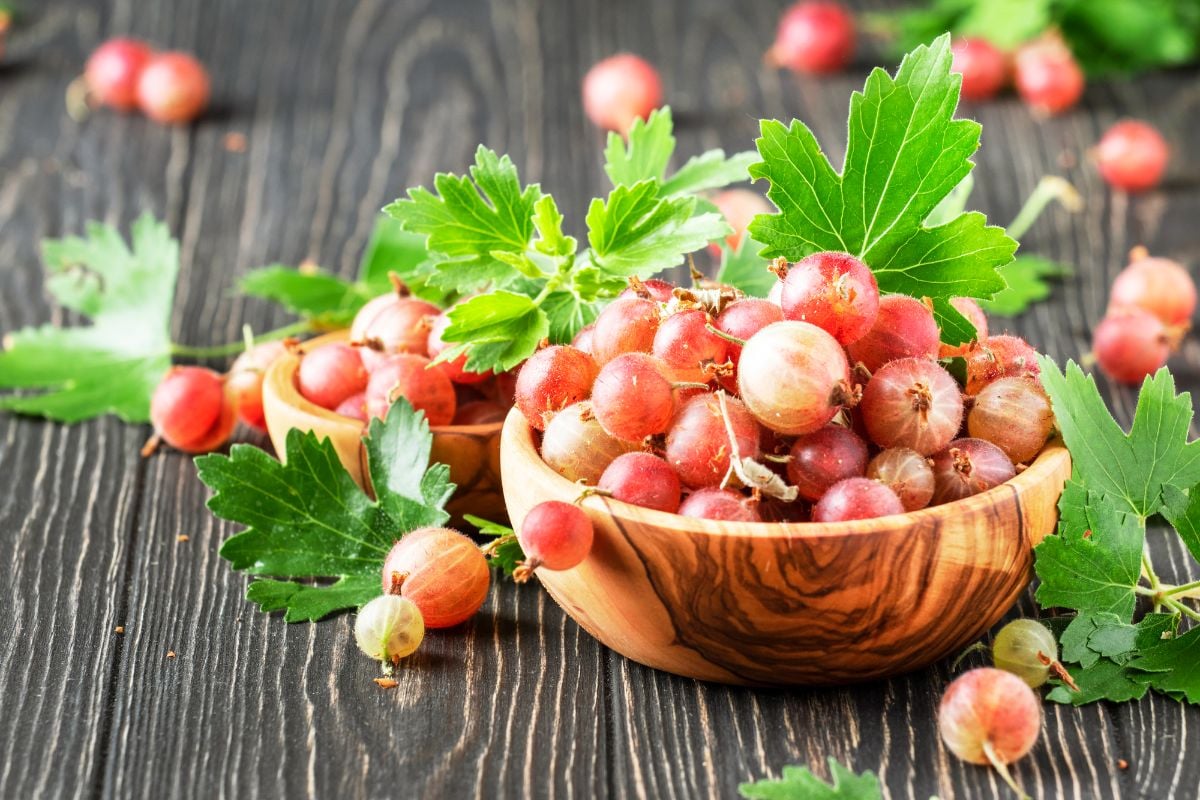 A mid-season variety that produces large dark red berries is excellent for eating fresh and cooking.  The Crown Bob is an older variety that has been reintroduced and has some mildew resistance.

The Early Sulphur is usually the first gooseberry to ripen, with fruit ready to eat as early as late May.  The fruit is mid-sized and matures to a bright yellow.  The flavor is excellent.  Once very popular, it has experienced a renaissance in recent years.

A substantial dark red berry that grows well in the United States.  It fruits in July and August.  The bushes are reasonably vigorous and productive, producing very large dark red berries of good quality. 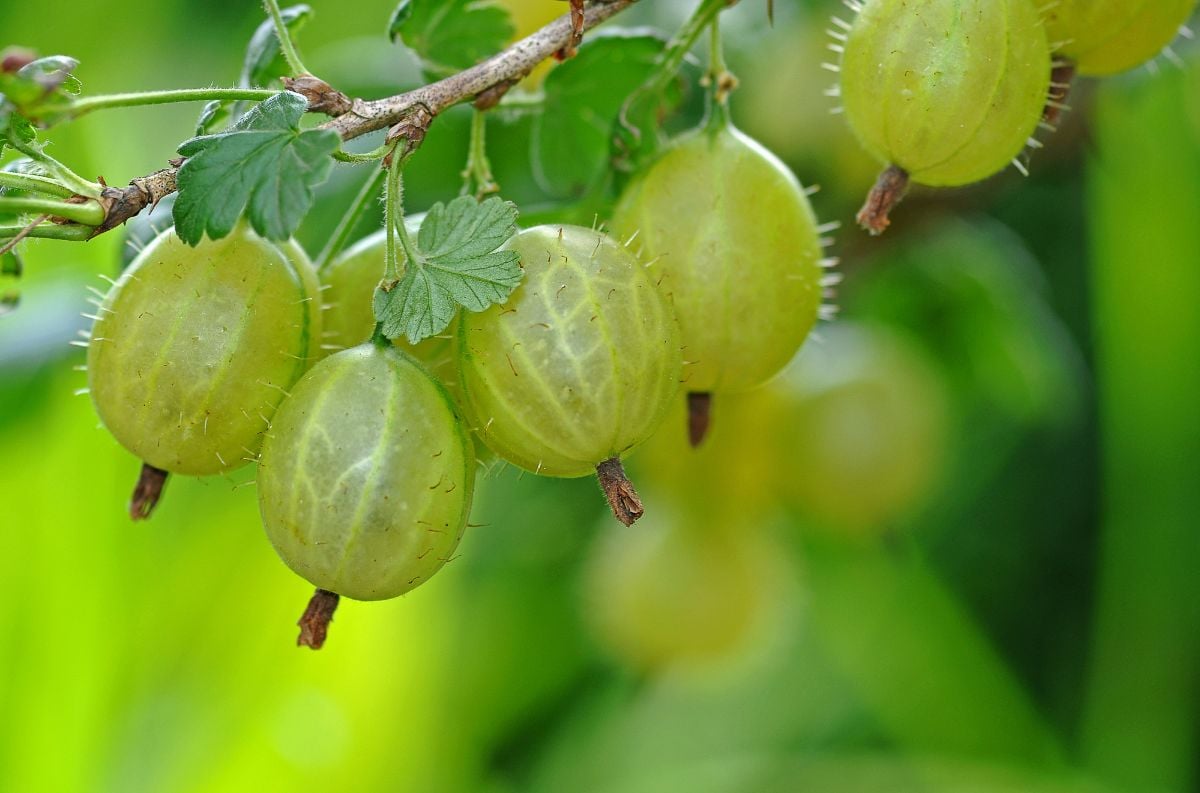 Considered by many to have the most pleasing flavor of any gooseberry, the Golden Drop produces a thin-skinned deep golden berry with an outstanding aroma.  The bush, however, is small with grayish-green leaves and not as vigorous as many with a tendency to spread.  The berries are small and ripen in late June and early July.  The Golden Drop is a very popular choice among growers.

A newer mildew-resistant variety produces an early heavy crop of good fruit.  The bushes are compact and have relatively few thorns.  The Greenfinch may be the most disease-resistant gooseberry.

A heavy producing, late to mid-season gooseberry, the Gunner delivers very large light green gruits.  It is excellent for eating fresh and grows in a large, somewhat spreading bush. 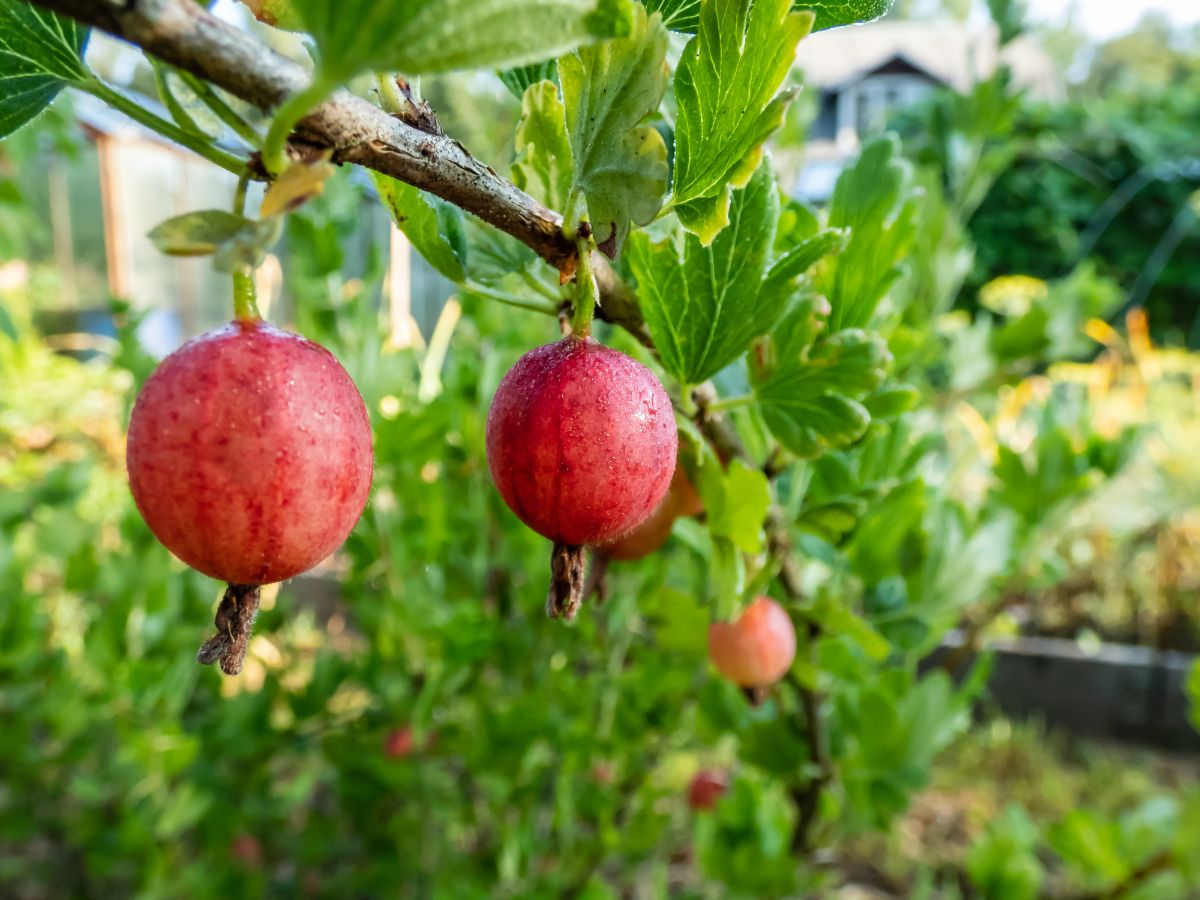 One of the more popular of the older varieties, the Hedgehog has a sweet aromatic flavor and ruby-red skin.  It is not exceptionally spiny and tends to grow very upright, making it ideal for hedges.  Over 100 years old, the Hedgehog has been described as having the perfect flavor.

See also  How to Store Oranges

The Hinnonmaki Red has a tart, tangy skin but sweet, aromatic flesh like some plums.  Plants are somewhat vigorous and partially resistant to mildew.  The fruit ripens in July, and each mature plant will produce four to five pounds of fruit.

Its fruit is particularly good for preserves and jams.  Hinnonmaki is mildew resistant and cold hardy. 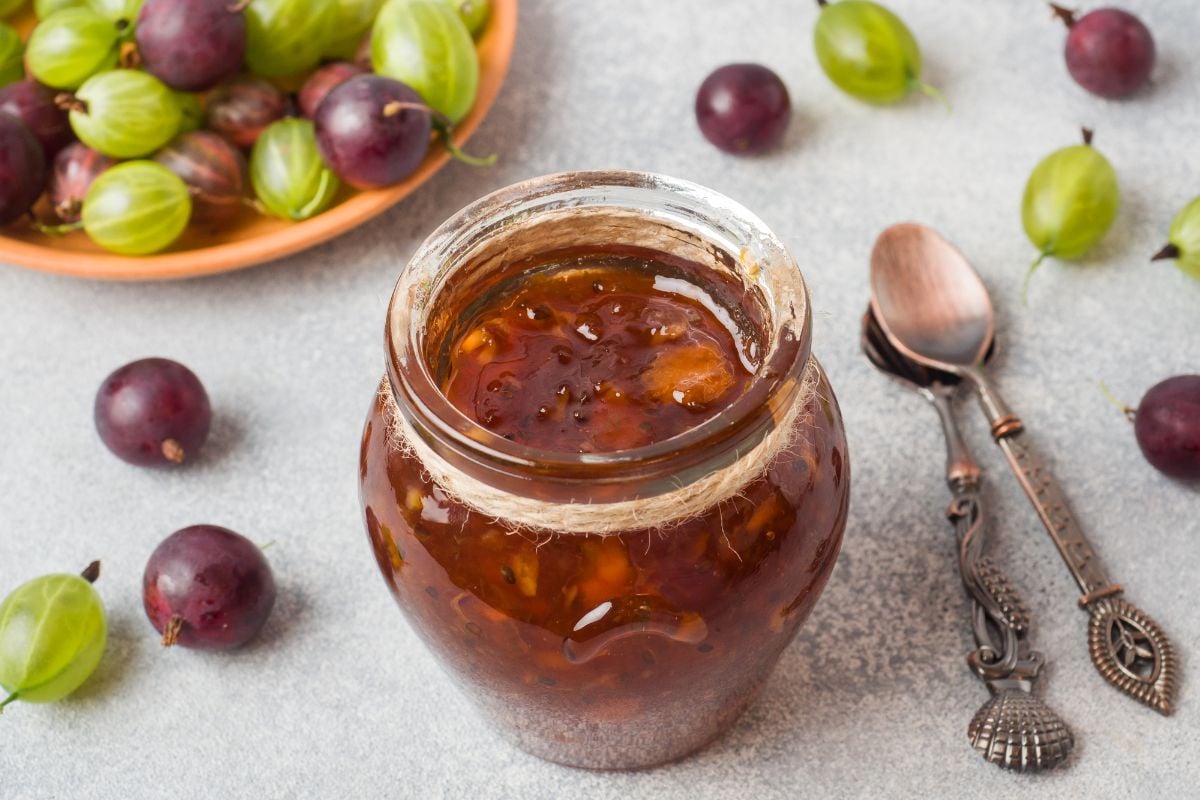 A hardy European variety, the Hino Green yields a large crop of green berries, suitable for all cooking purposes.  The bush has some mildew resistance and is very hardy.

The Howard’s Lancer thrives in any soil, producing a heavy mid- to late-season crop of large smooth, yellow-green berries with superb flavor.  Some believe it to be among the best gooseberries ever grown.  It will often do well in soils where other varieties have been challenging to grow. 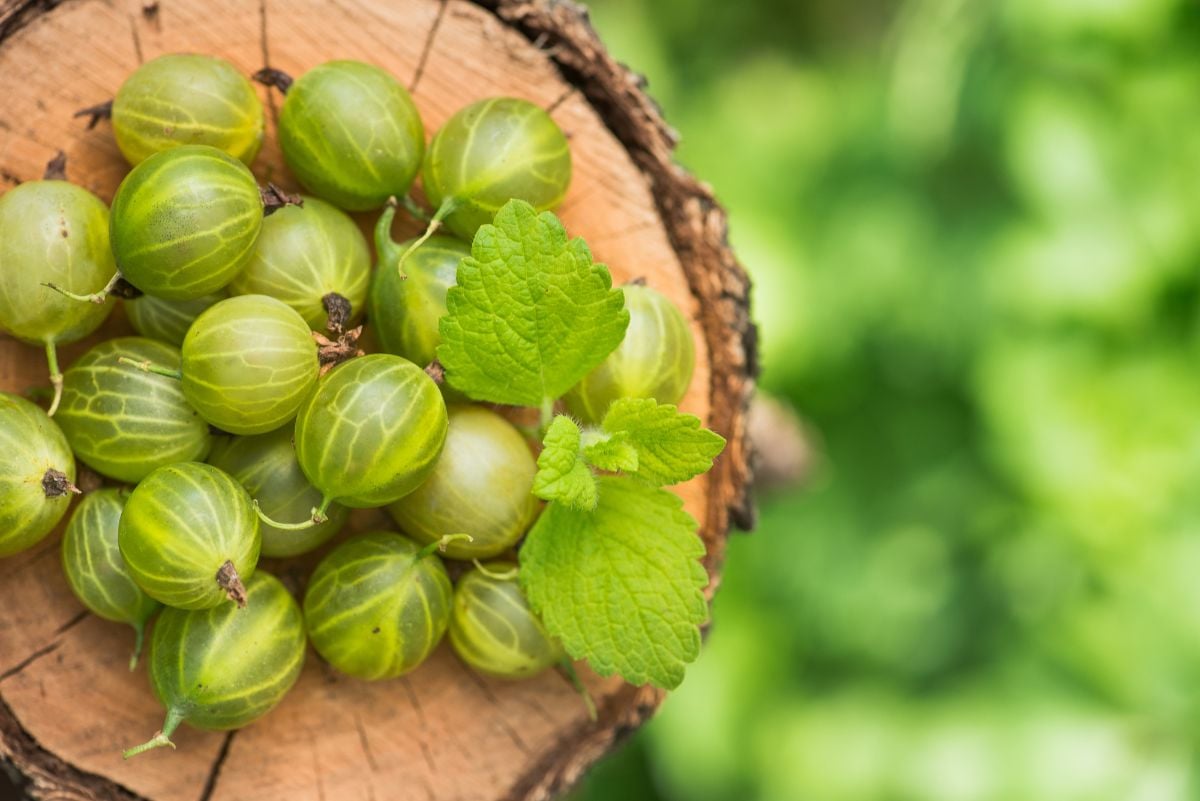 A relatively common European variety, this pale green gooseberry offers a lot of sweet flavors (though less than many European types) and is mildew resistant.  The plants are very thorny.

An old red variety, the Lancashire Lad requires some care to grow and ripens late.  It does have an excellent, consistent flavor. 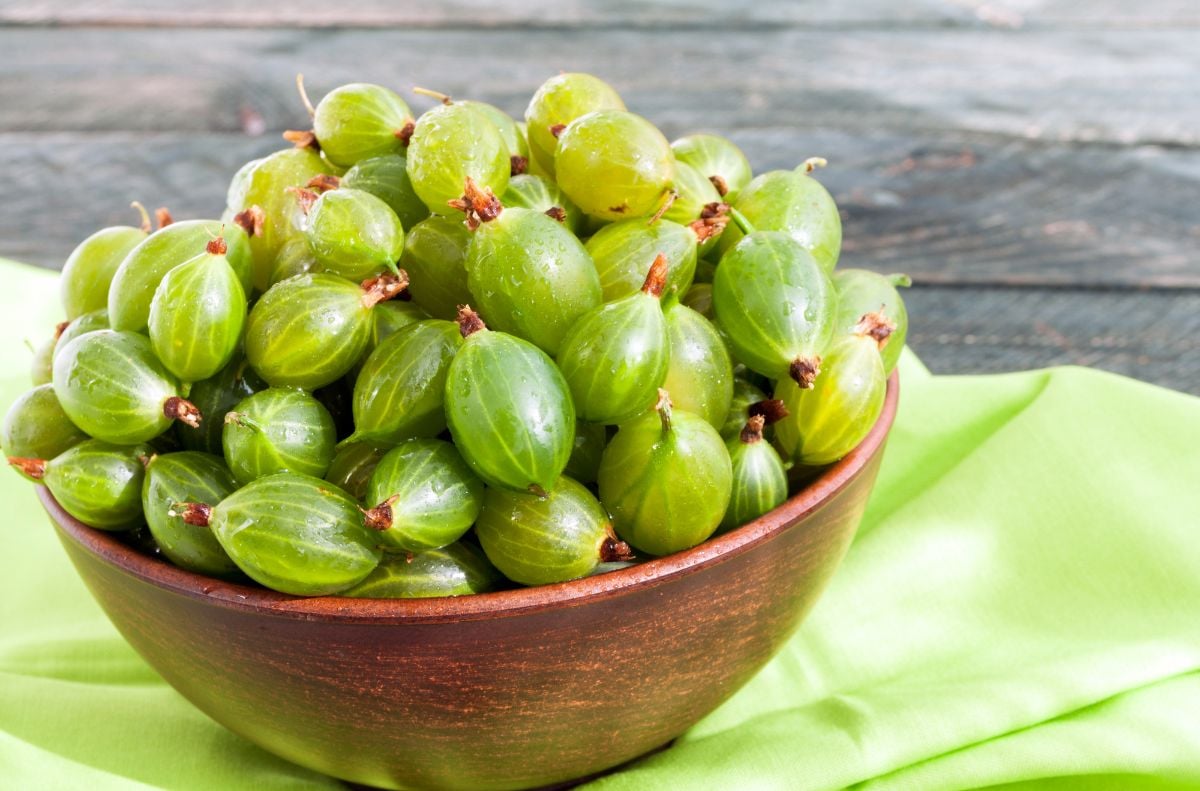 The Leveller is a star among gooseberries and one of the most sought-after varieties.  It does not produce the heaviest crops, but the fruit is large and sumptuous with a rich, deep flavor.  The Leveller ripens to a yellow color by mid-June when it begins to taste like a greengage plum.

The Leveller does well in cooking but is best for eating as a dessert fruit.  While the fruit is not abundant, it is larger than most varieties.  The bushes are not as heavily foliated as many other gooseberries.

See also  Why were noodles invented?

The Lord Derby produces among the largest gooseberries, which ripen to a deep red.  It is full of flavor and juice.  The Lord Derby does not make the largest crop, though there are many fruits of good quality.  Unlike many reds, it does have some mildew resistance.

The Martlet is a newer variety that offers the mildew resistance rare among red gooseberries.  Its foliage is dark green, and it is a heavy producer of high-quality berries compared to older varieties.  The deep red berries are quite sweet and delicious to eat.

The bushes are easy to manage, with berries that are among the largest to be found.  Fruit is ready for picking in early June. 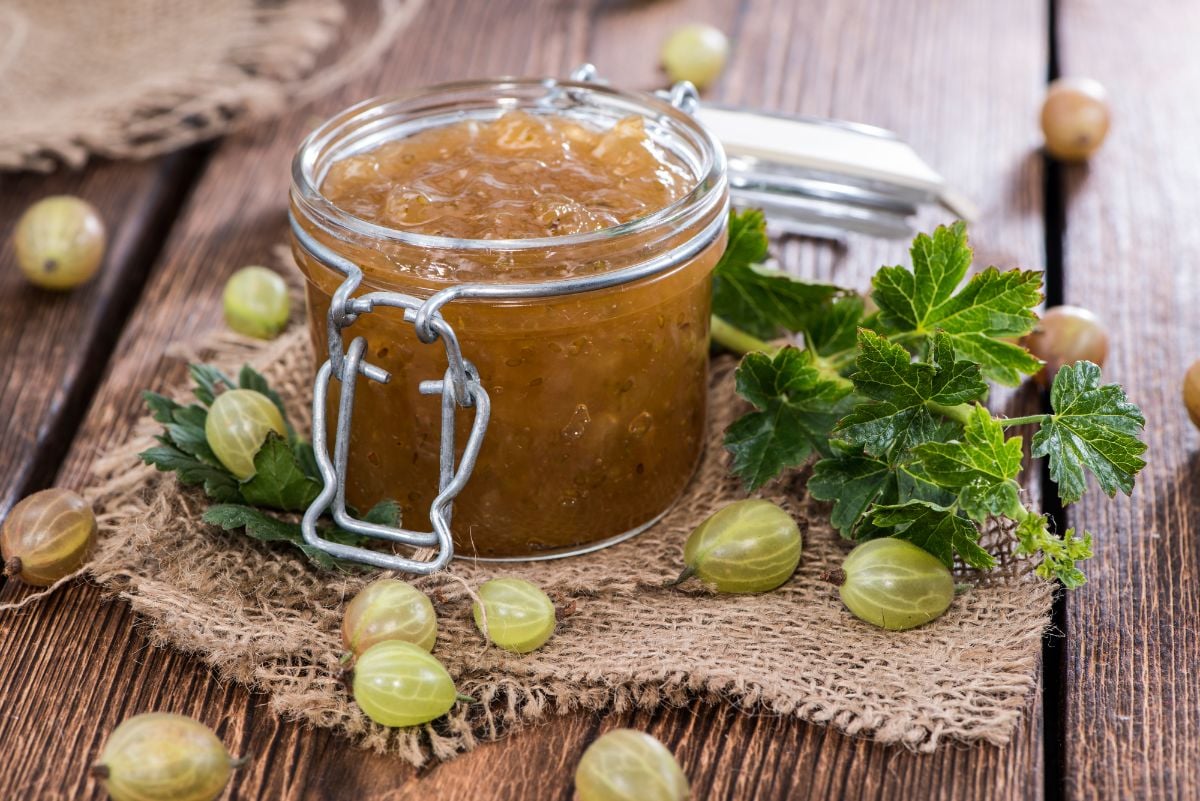 One of the finest red gooseberries, the May Duke can be cooked when green and used for sweet dishes when ripe and deep red color.  The skin of the late May or June fruit is smooth, making for delicious fresh eating.  The bushes are upright and easy to manage.

One of the most common American gooseberries, the red Pixwell is perfect for pies, jams, and jellies.  Some deem its fruit “only fair,” but it is mildew resistant, productive, and hardy.  Fruit should be harvested when slightly underripe. 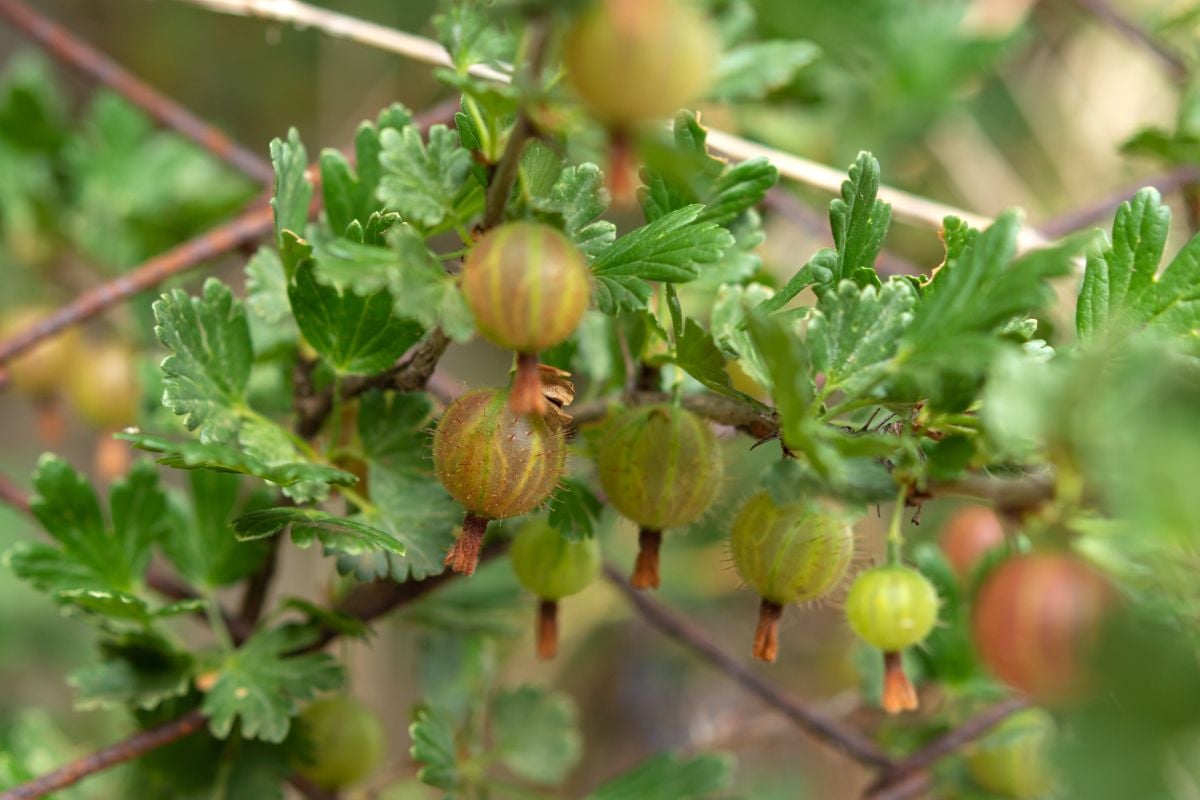 The Poorman is one of the best American varieties for the home gardener.  It is vigorous and has limited small thorns.  The Poorman is resistant to powdery mildew and has a long fruiting season.

Another newer mildew-resistant red gooseberry, the Rokula is great for those looking for low maintenance cultivation.  The large red berries have a delectable flavor with a heavy yield and a harvest that begins in mid-June.  The berries make excellent pies, jams, and jellies, but are also delicious straight from the bush.

The Rokula has already become very popular with home growers. 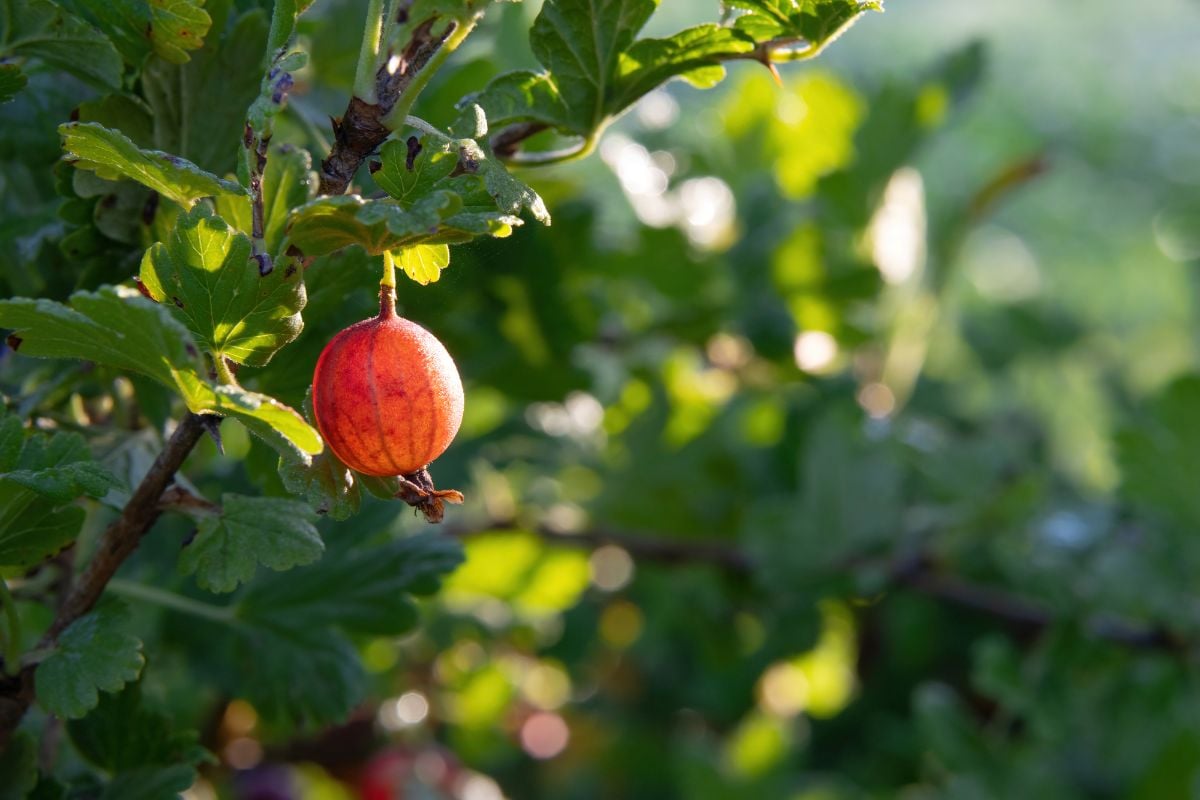 This gooseberry is easy to grow in any soil, is vigorous and productive, and great for the home grower.  It produces medium-sized red berries with an excellent sweet flavor.  The fruit is ripe in mid-June and will stay on the plant for some time without a reduction in quality.

The White Eagle is a rare pale white berry with a mild sweet taste.  When fully ripe, the berries appear almost transparent with a thin skin.  The fruits grow on the entire branch and ripen in mid to late June. 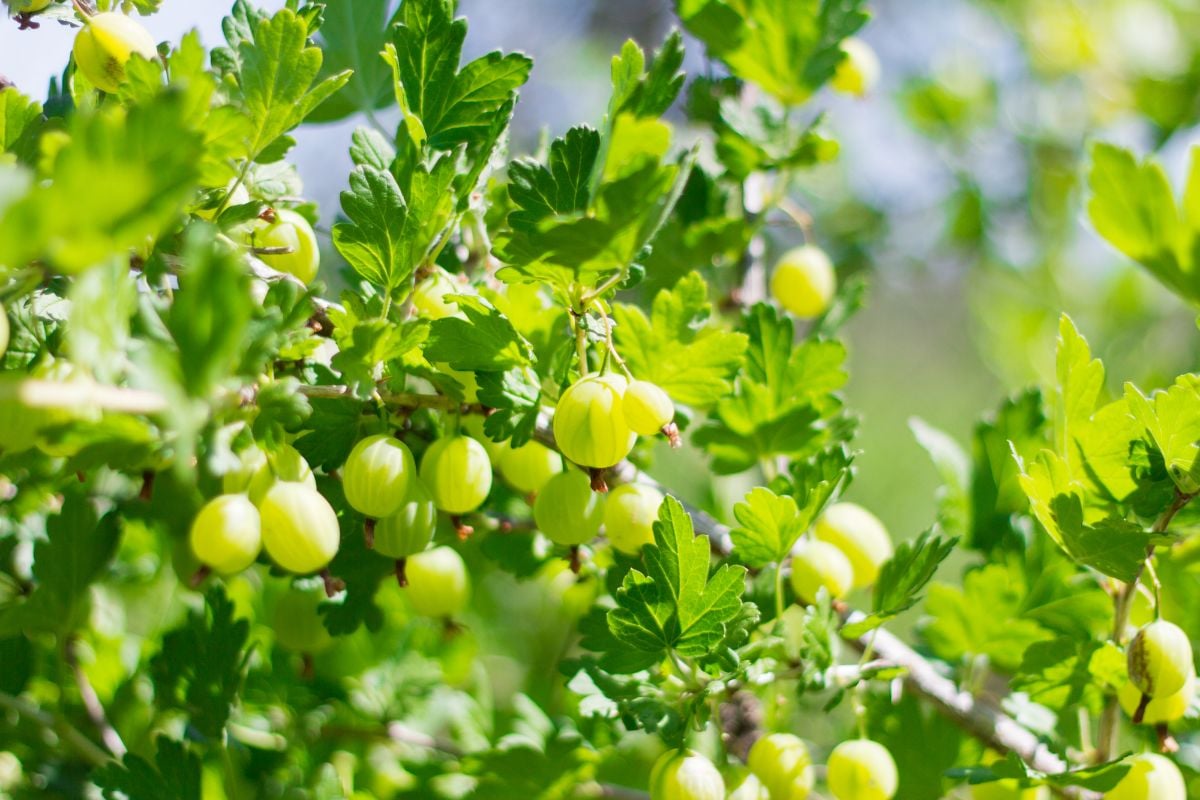 A vigorous berry with good foliage and largish, white and green berries with a mild sweet flavor.  It ripens late enough to extend your season, producing well into July.  Thin-skinned and luscious, this rare variety can do well. 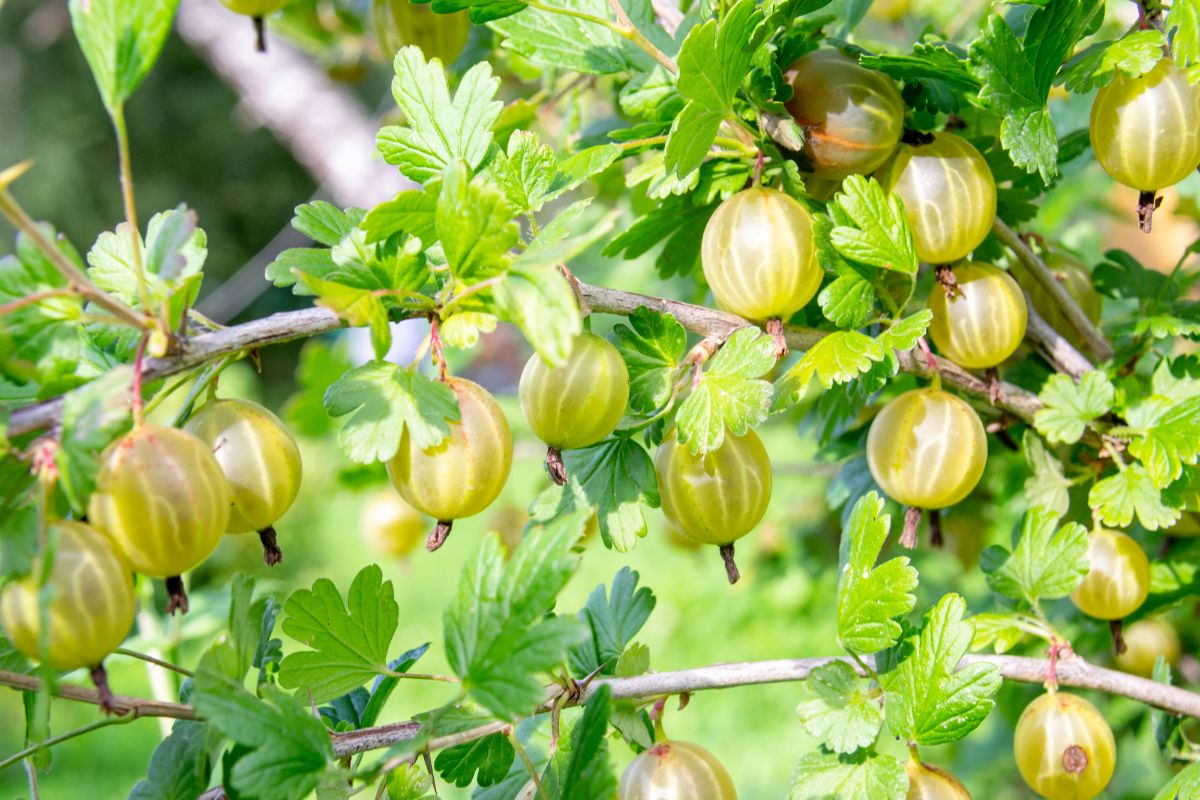 The Whitesmith ripens to a variety of green and yellow colors.  It has relatively smooth skin and an outstanding fragrance.  Among the best varieties for eating fresh, it is also excellent for cooked preparations.  Generally available in June and July. 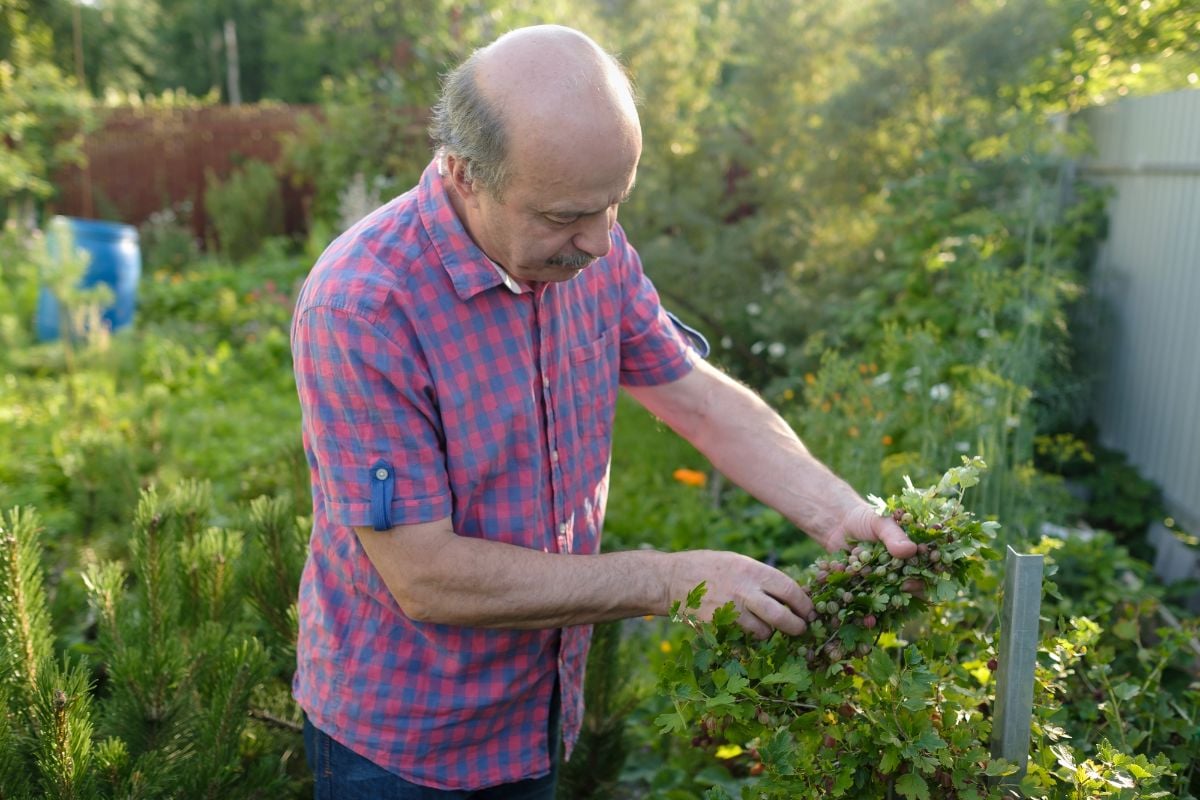 Gooseberries do best in regions where the winter temperatures range between 35 and 45 degrees, with U.S. hardiness zones three to eight being perfect.  The plants are prone to disease in high humidity, so make sure to allow lots of air circulation around each plant.

The plants are happy in full sun or part shade, but hotter areas require afternoon shade.  Plants should have mulch around the roots to maintain a cool temperature and the proper moisture levels.  Heavy watering is necessary once a week, and plants should be fertilized in early spring.

Harvest with care, wearing gloves if the plants have thorns.  Plants will produce after one year and should be pruned at the end of the growing season.  There are many diseases- and pest-resistant varieties which are much easier to grow.