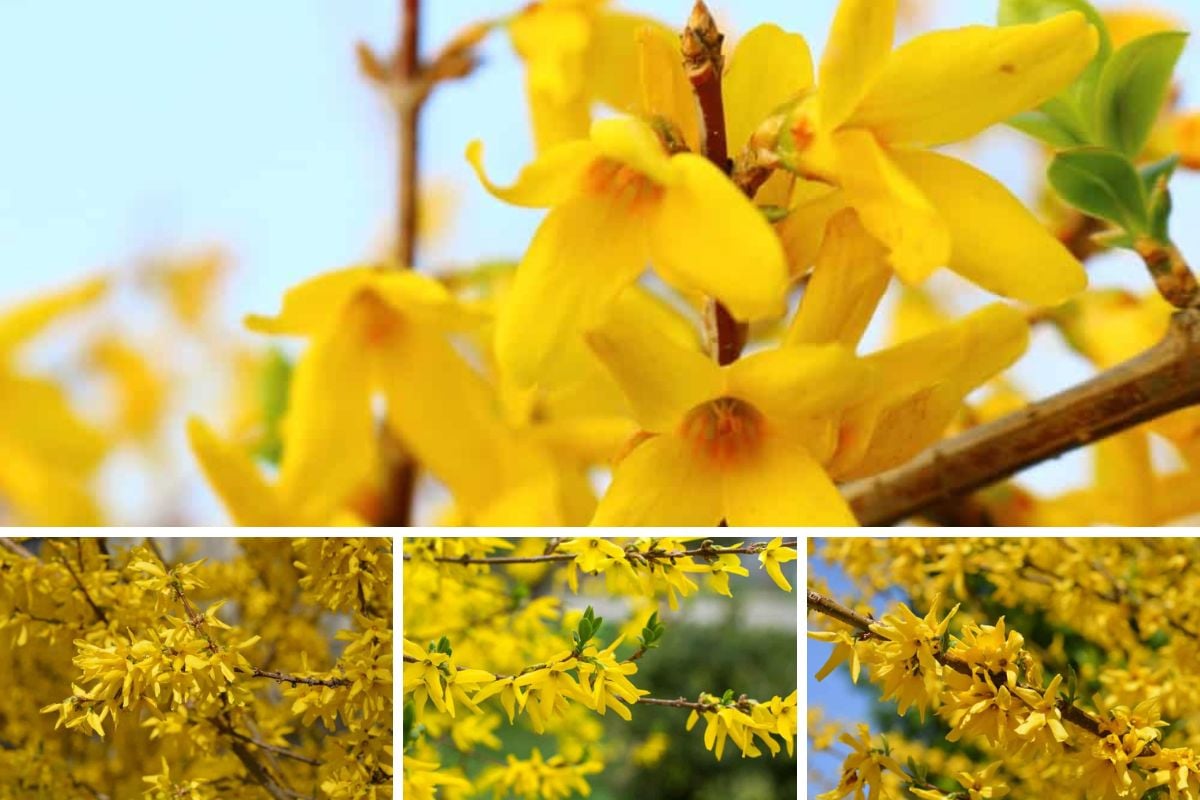 Forsythia is an early spring flowering shrub that is particularly known for its burst of mesmerizing yellow color, often accompanied by plush green foliage. This beautiful combination of green and yellow makes it an excellent choice to grow in parks and gardens.

These species are quite similar to daffodils in their appearance, which carry a bright yellow bloom and are an absolute delight to behold.

This shrub belongs to the olive family and is found to have originated primarily in Asia. During the mid-nineteenth century, these deciduous shrubs were in great abundance in European gardens after which several hybrid species were found in America around the time of the first world war.

Forsythia gets its unique name from the Scottish botanist William Forsyth, after whom the flower was named. It is also commonly referred to as “golden bell” considering the bright spring yellow flowers this plant produces.

There are several different varieties of forsythia that can be found today however, interestingly, all of them sport the same yellow color except for the ‘white forsythia’.

The differences appear in the shrub size, the flowering period, and the growing requirements. Below are the ten most common and popular types of forsythia flowers. 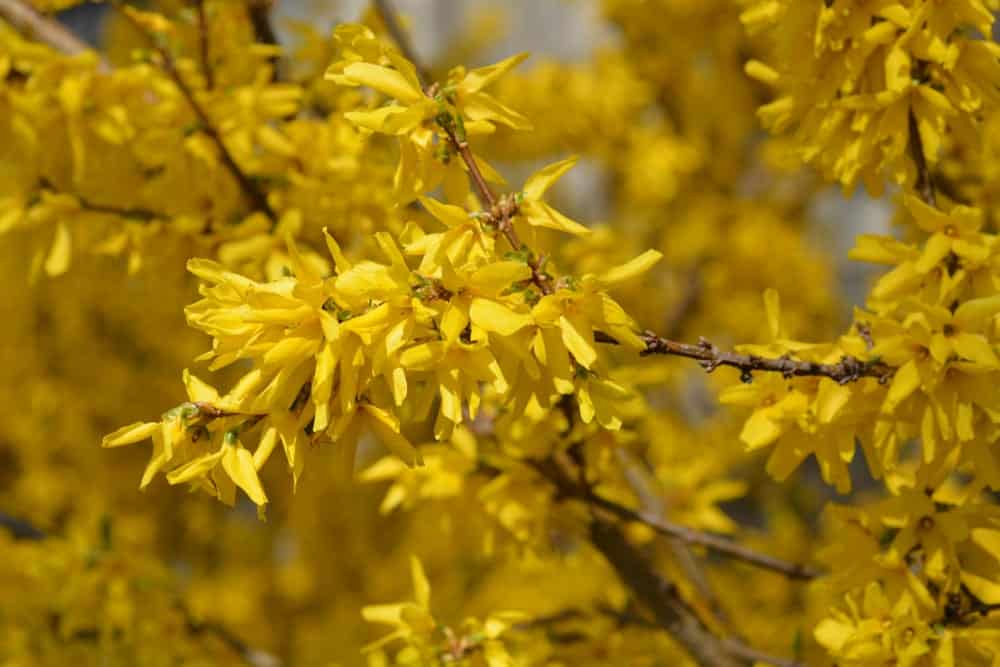 This species is also called ‘forsythia suspensa’ and is native to Asia. It is described as a large shrub that stands out due to its pale color, which makes it easily identifiable. Weeping forsythia is typically grown on stream banks as a weeping shrub.

It is a member of the olive family and is a deciduous garden shrub that sheds its leaves during the fall season. This tree grows to an average height of 1-3 m and consists of a grey-brown colored bark that is known to be very rough.

The leaves of this species grow about 2-10 cm in length and consist of toothed and smooth edges alternatively, on opposite sides. It is primarily grown for its toughness, which is also one of the key reasons why it is prized so much by a large number of people.

The bloom time for weeping forsythia is April-May, during which it produces beautiful yellow flowers before the appearance of the leaves. Each flower on this plant consists of 4 petals, each of which is 2 cm long and is together joined at the base. It also flowers best under the full sun but may also prefer partial shade, sometimes.

Interestingly, this species of flowering plant is one of those fundamental herbs that are used to make traditional Chinese medicine. 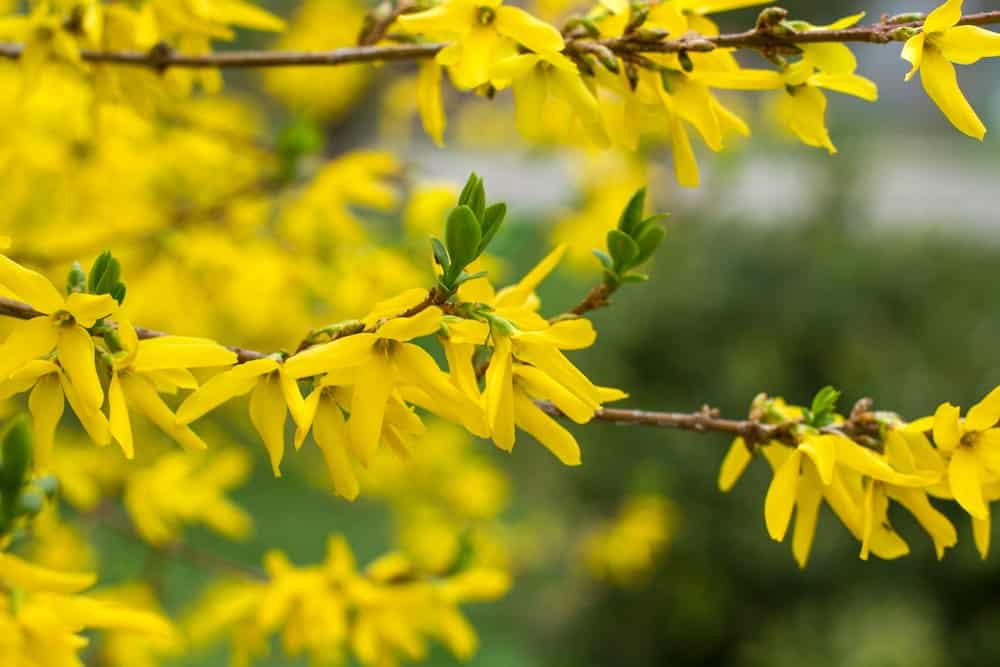 This is also known as ‘Golden Bells’ and is the prime reason behind some of the most popular forsythia cultivars currently. It is a medium-sized shrub with an upright habit that produces striking bright yellow flowers, a feature that is common among most forsythia species.

This species is a hybrid or cross between Weeping forsythia and Green-stemmed forsythia which is why the botanical name for this plant goes like, ‘forsythia x intermedia’. It is an ornamental and deciduous garden shrub that grows to an average height of 3 to 4 meters high.

This plant was first discovered growing in a botanical garden in Germany after which the hybrid was officially named and described in 1885. It is the earliest shrub to bloom that grows in partial shade or full sunlight but is also extremely well-adapted to temperature changes.

One of the most distinctive qualities of this species is the stunning yellow flowers that it produces are highly noticeable, even in twilight. This is one of the main reasons why you will find this plant to be widely cultivated across all the green regions in most European towns, including parks and gardens. 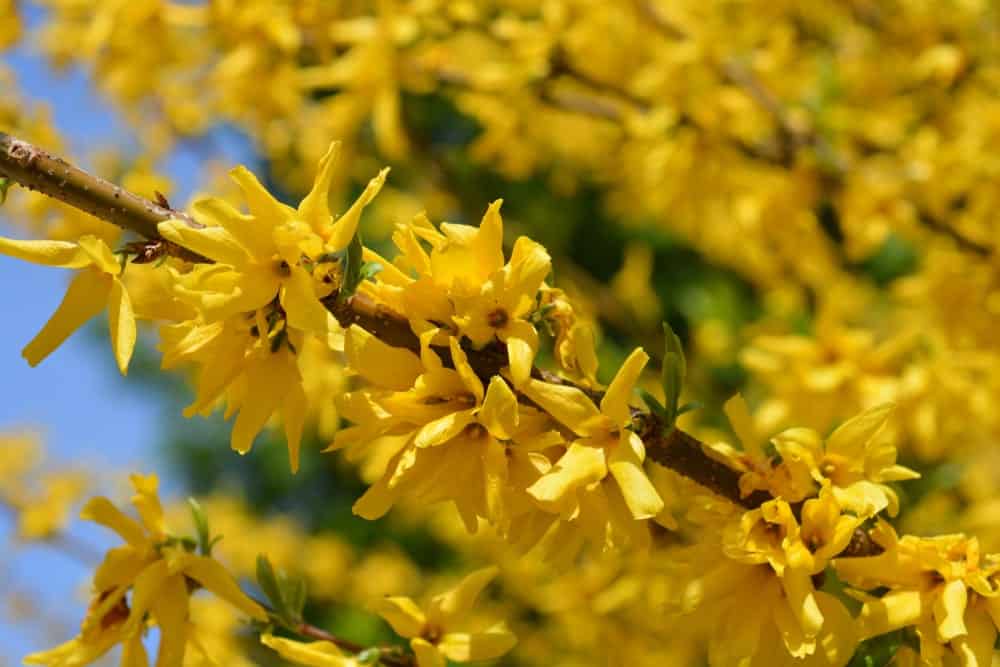 Also known as Forsythia viridissima, and ‘Golden Bells’, the green-stemmed forsythia belongs to the Oleaceae family and is native to China. It is described as a compact deciduous shrub that grows to an average of 0.75 to 1.00 feet and spreads to about 2 to 3 feet. It is believed to be a smaller plant than the common weeping forsythia and consist of a low-growing habitat.

The bloom time for green stem forsythia begins in during the month of March and ends around April, during which it produces modest yellow-colored blooms. It grows well under full sun and even partial shade, however, the best flower production happens under full sun conditions. Interestingly, it appears to have a great tolerance for urban conditions.

This plant blooms well in well-drained soils that consist of average to medium moisture content. Its leaves are elliptic-oblong in shape, almost 6 inches long, and also toothed above the middle. 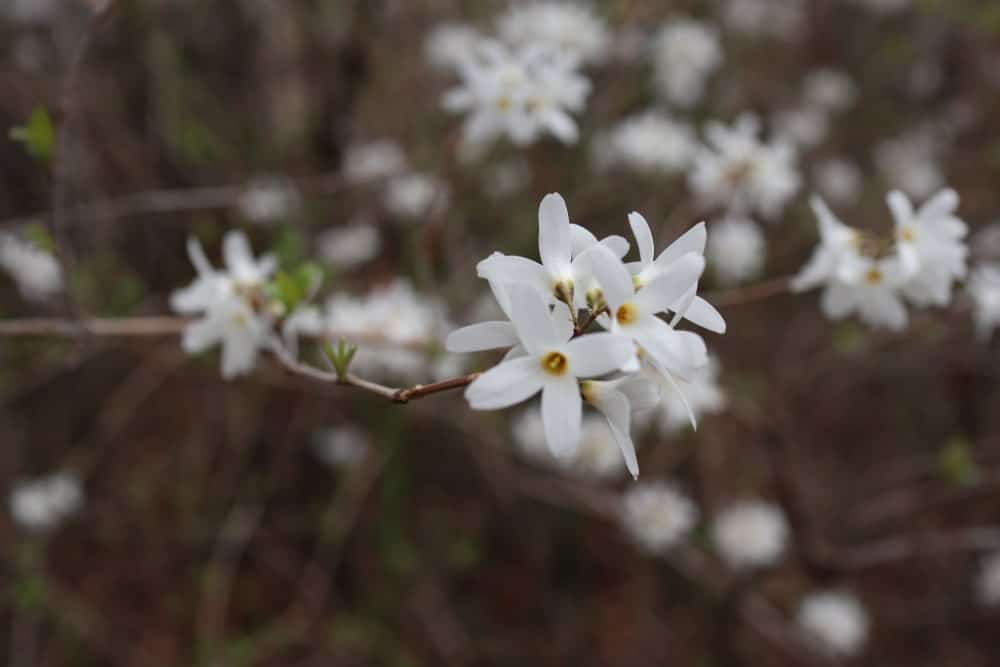 Although this is one of the main forsythia species, it is actually different than the other varieties in terms of its color, as the name evidently suggests. This deciduous shrub produces creamy white flowers that add a great touch of beauty to your garden, alongside the other beautiful yellow forsythia flowers.

White forsythia belongs to the Oleaceae family and grows to an average height of 3 to 6 ½ feet which makes about 1 to 2 meters. The flowering season for this plant ranges from March to April and is best planted at the beginning of the fall season or spring.

This species does extremely well in party-shaded or completely sun-filled locations; however, it blooms well in partially shady conditions. It holds quite a reputation for being a hardy kind of plant and has a great ability to resist even in the coldest temperatures in Western Europe.

This plant is native to a small region that is a part of central Kenya and is greatly used as a medicinal plant since it consists of properties that are really similar to the witch hazel plant. 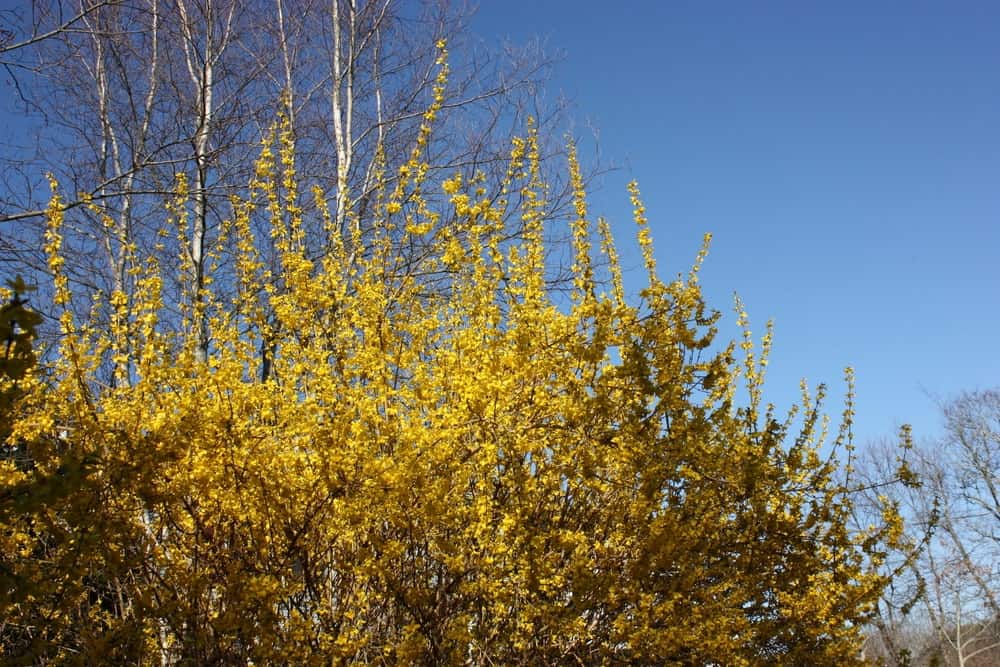 As the name suggests, this species of forsythia adds a breathtaking hue of gold to your garden due to its bright and striking yellow flowers. It is popular for its vibrant pop of color that it adds to any landscape and makes it look absolutely mesmerizing.

The Lynwood Gold forsythia is often referred to as “the ultimate sign of spring” by most people given how early and fast it blooms, as well as how its breathtaking flowers grow in a way that they form an even line along the stems. This even and smooth pattern creates a beautiful blanket of gold-yellow color that actually looks like the spring season has befallen us.

The plant is best grown in full sun and grows to an average height of 8 to 10 feet. Its flowering period begins in early spring, and the flowers appear well before the foliage. The leaves of this plant are bright green and lanceolate-shaped and have toothy margins. It requires well-drained soils to fully grow and is virtually carefree, which means that it is fairly easy for one to grow them and they don’t require as much heavy maintenance.

The best part about the Lynwood gold forsythia flowers is that their floral display turns a gorgeous, striking yellow with hues of orange and red that looks nothing short of breathtaking against the dark green foliage. 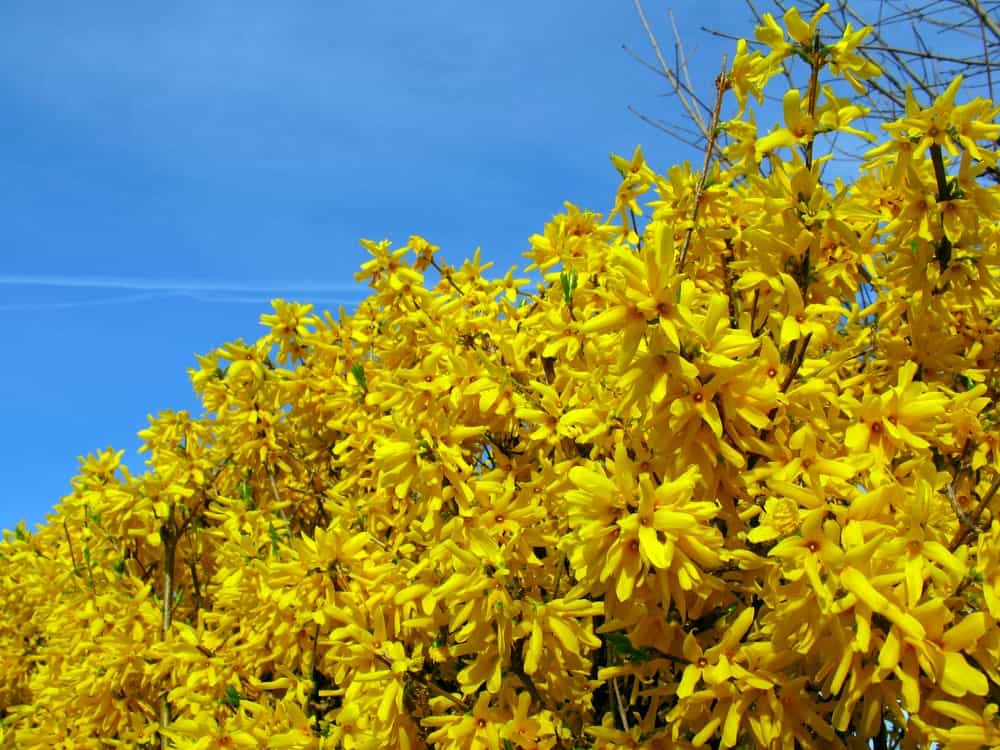 This is an upright-growing shrub that is referred to as the official harbinger of spring. This title has resulted from its beautiful golden-yellow flowers that bloom in the early spring season followed by an ethereal display of dark green foliage.

It grows to an average mature height of 6 to 8 feet and spreads to about 5 – 7 feet. The plant requires full sun to grow and bloom well and is particularly well-adapted to soils with decent amounts of moisture. It consists of exceptional bud hardiness and is believed to be reliably hardy in the North.

The northern gold forsythia is not just an ideal option for creating a stunning yellow landscape but also works really well as solitary accents, as a tall hedge, and even as a barrier. The leaves of this plant sport a lighter lime-green color that darkens as the leaves gradually mature. 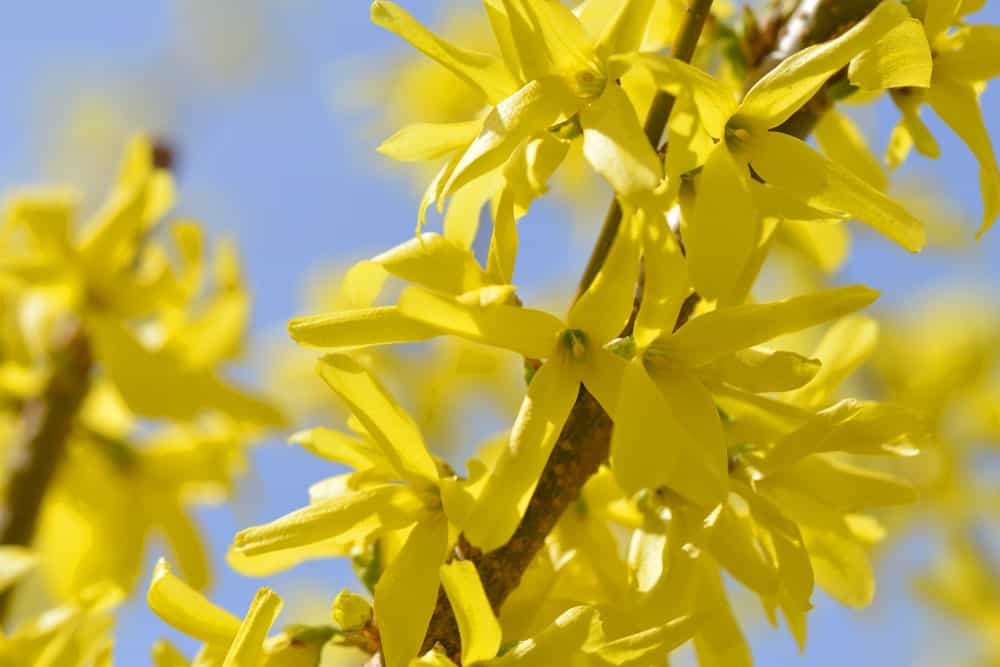 Also known as Forsythia mandschurica, this species is arguably one of the hardest types of forsythia that belongs to the Oleaceae family. It produces sulfur-yellow flowers that gradually emerge from black-colored buds and are also one of the first few species to bloom among all other forsythia varieties.

It grows particularly well under full sun or partially shady conditions and grows to an average height of 6 to 8 feet which makes about 1.8 to 2.4 meters. The bloom season for this hardy, deciduous shrub begins in early February where it results in gorgeous yellow flowers. It produces lush dark green foliage and prefers to grow in average to moist well-drained soils.

The leaves of the Vermont Sun forsythia are rounded in shape and are almost 3 inches in diameter. The plant also appears to have stiff and upright kind of branches. 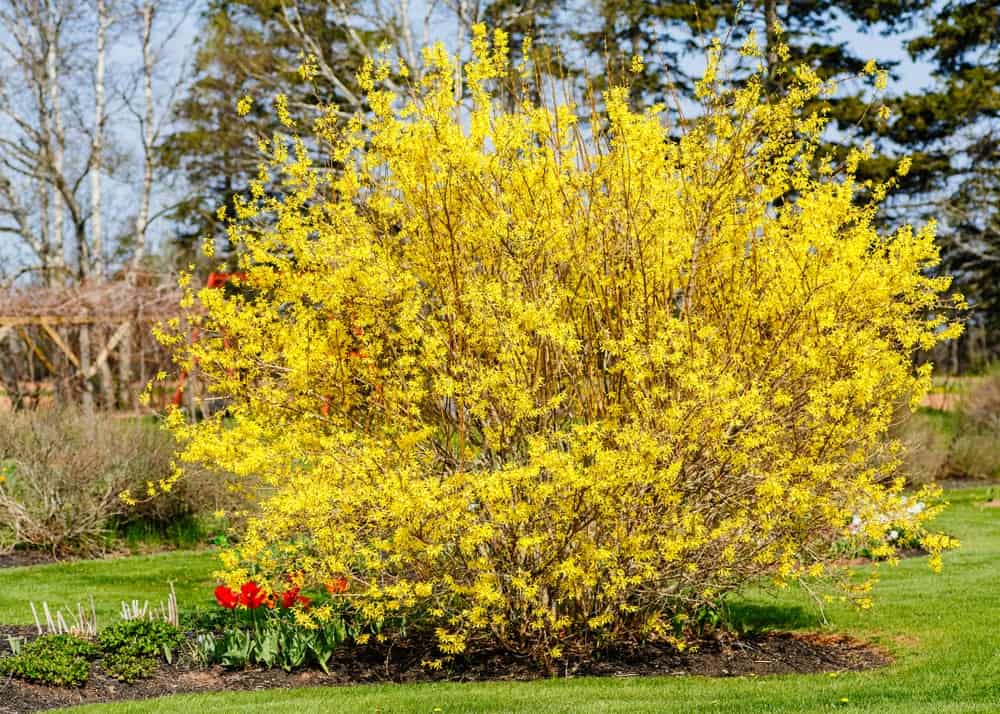 This forsythia species is also called Courtacor or Gold Curl forsythia which is a deciduous shrub that belongs to the Oleaceae family. It is native to East Asia and is basically a genetic mutation of the spring glory forsythia. The mutation was done using gamma-ray radiation that ended up stunting the size of this plant by greatly slowing down its growth.

The Goldilocks forsythia is widely recognized for its beautiful spring flowers that grow in abundance and also its solid, compact shape. It is one of the new cultivars that produce dark green foliage and grows 2 to 3’ tall. It is a plant that has gained popularity due to its good winter hardiness and adaptability.

The plant grows best in average to medium well-drained soils and has an impressive tolerance for growing in urban conditions. It is also exceptionally brawny which means that it can thrive well in temperatures as low as negative 22 degrees Fahrenheit. 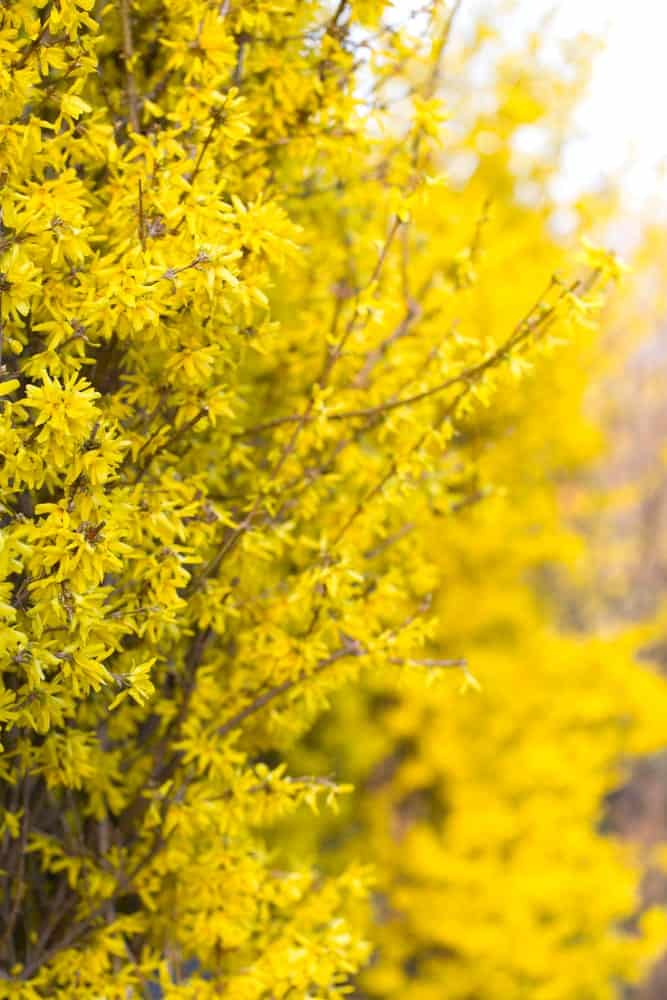 Also known as Forsythia Courtasol, the Gold Tide forsythia grows to an average of 24 inches and spreads about 3-4’ across. It is described as a compact border shrub that is more towards the wide side than tall and produces spectacular bell-shaped golden flowers.

The light green foliage produced by this plant has made it an absolute garden favorite for the early spring color for a majority of people. During the fall season, the plant adopts a stunning purplish shade on the outside and turns a pale yellow on the inside.

The bloom or flowering period for this plant begins in March and ends in April. It is also popular for being one of the first few plants to burst into amazing lemon-yellow flowers early in the spring season and contains no significant negative characteristics. 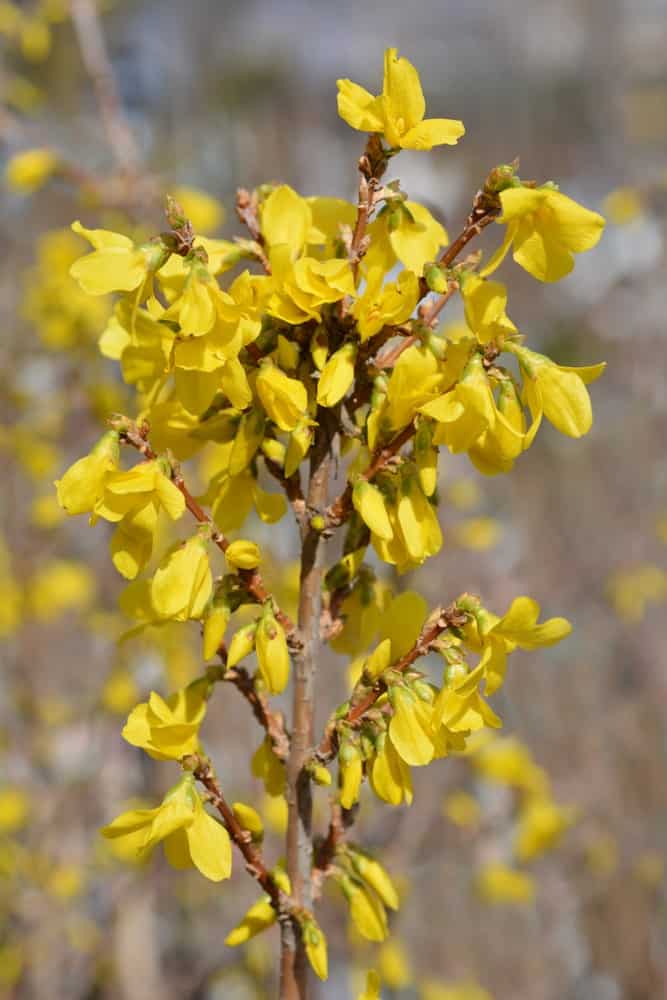 This is believed to be an excellent dwarf undercover type of shrub that consists of pale yellow flowers coupled with crisp and plush green notched foliage. It is a deciduous shrub belonging to the olive (Oleaceae) family that grows to an average of 2 to 3 feet and spreads about 4 to 7 feet. It is native to Eastern Asia, with some species also growing in Southeastern Europe.

It produced gorgeous flowers bursting with color during the early spring season before the appearance of the lush foliage. Although the Arnold dwarf forsythia is smaller in size than most other varieties, it produces a spectacular kind of dark green summer foliage that gradually transforms into a beautiful bronze-green color during the fall season.

Since the rooting of this plant occurs in contact with the soil along the lower branches, it makes it an excellent and ideal choice to be used in the extensive massing of landscapes. It prefers growing in full sun to partial shade conditions and blooms best in acidic, wet, dry clay and sandy kinds of soils.

This variety of forsythia makes a desirable border shrub in most landscapes, especially because it is a moderately fast grower compared to a few other forsythia species.

Whichever of the forsythia varieties you prefer to grow in your garden, all of them will burst into cascades of bright yellow blooms that will bring your garden back to life. So, plant your own forsythia flowers today and witness the magic of Mother Nature in your garden!