Ever wondered how and why the Forget-Me-Not plant got such a special and unique name? Find out the origin and history of this plant along with numerous types of Forget-Me-Nots that can be found across the globe. 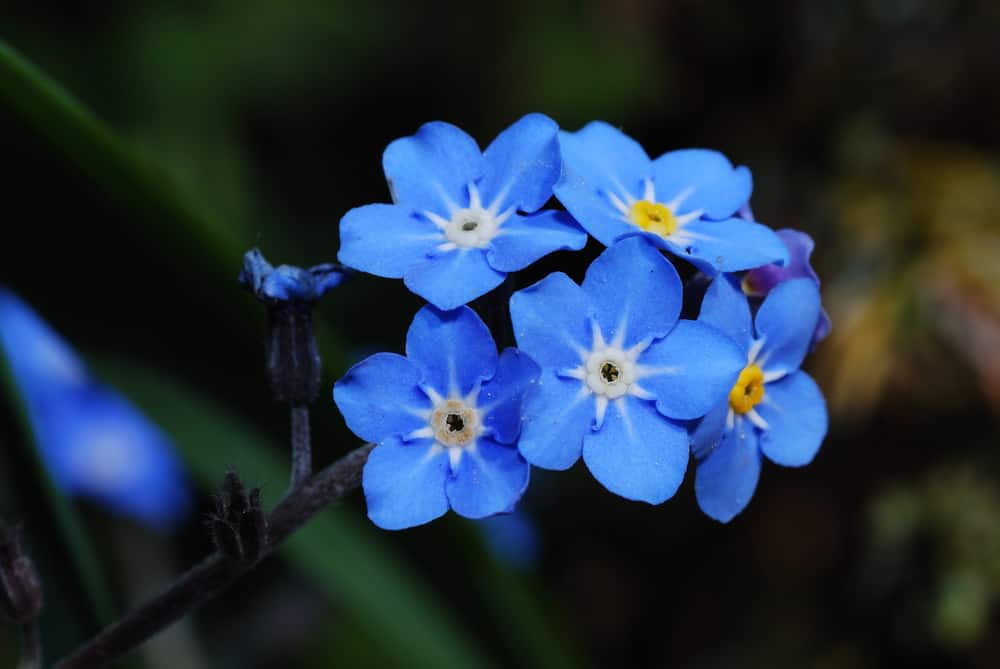 The Forget-Me-Not is one of the most beautiful and pleasant flowering plants that produce gorgeous flowers in a variety of colors including blue, yellow, white and pink. You can place this stunning plant anywhere in your house, your garden or on the front porch. Wherever you do, it is likely to attract adorable little butterflies and buzzing bees all around it.

The History behind the Unforgettable Name

The Forget-Me-Not plant has quite a legendary origin behind its name, according to which there was once a medieval knight who was walking beside the river one night with his lady love. He was holding a bouquet in his hands that he probably wanted to gift to the lady. However, because his armor was too heavy, the knight fell into the river. As he was falling, he threw the flower bouquet at his lover, and he shouted, “Forget-me-not!”

According to another Christian religious legend, however, these Forget-Me-Not plants were created by the child Jesus Christ to ensure that all the future generations would be able to see him, and also his mother Mary, on whose lap he was sitting.

The Forget-Me-Not flowers are truly humble flowers that have a rich history of symbolism and meaning behind them. It is commonly referred to as a lasting symbol of remembrance and has certainly played a massive role in America and Europe over the last few decades.

Some common meanings behind these beautiful blue blossoms include:

There is a variety of different Forget-Me-Nots that are found in this world, most of which have originated from Europe and Asia. Each variety has special features, characteristics, color and size that set them apart from one another.

Below are the different beautiful types of Forget-Me-Not flowers that exist in today’s time. 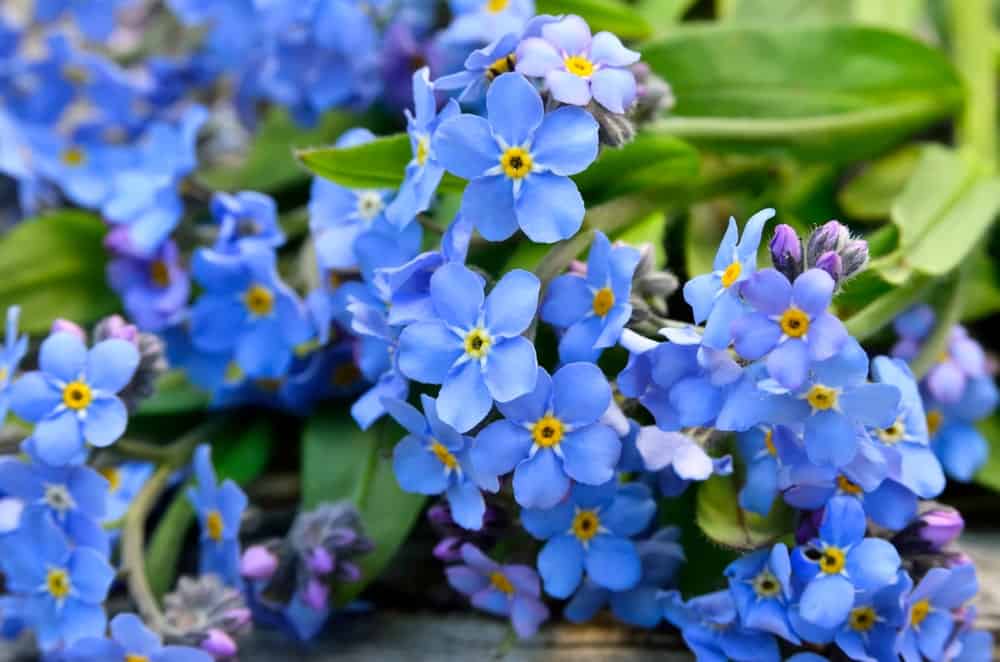 This is also commonly known as “woodland forget-me-not” and it is a type of short-lived, herbaceous perennial plant. It belongs to the Boraginaceae family and has originated from Europe and Asia.

The Wood Forget-Me-Not is a tufted and hairy spring-flowering plant that is easily grown in well-drained, moist and organically rich soils. It prefers full sun to partial shade in order to fully grow, and it grows to an average of 5”-12” tall. This plant produces beautiful bright blue, white, or pink stellar flowers that often have striking yellow or white eyes.

Its flowering period begins sometime during mid-spring and ends in the mid-summer season, after which the juicy nectar and the pollen of its flowers are thoroughly enjoyed by butterflies and bumblebees. This plant is particularly famous for being really low-maintenance and is also super versatile since it performs really well in rock gardens, borders and banks, and under-planting shrubs.

This variety consists of oblong, hairy green-colored leaves that grow approximately 1-3” long. It is also very easy to look after this plant, and it is resilient to most pets, particularly rabbits and deer. 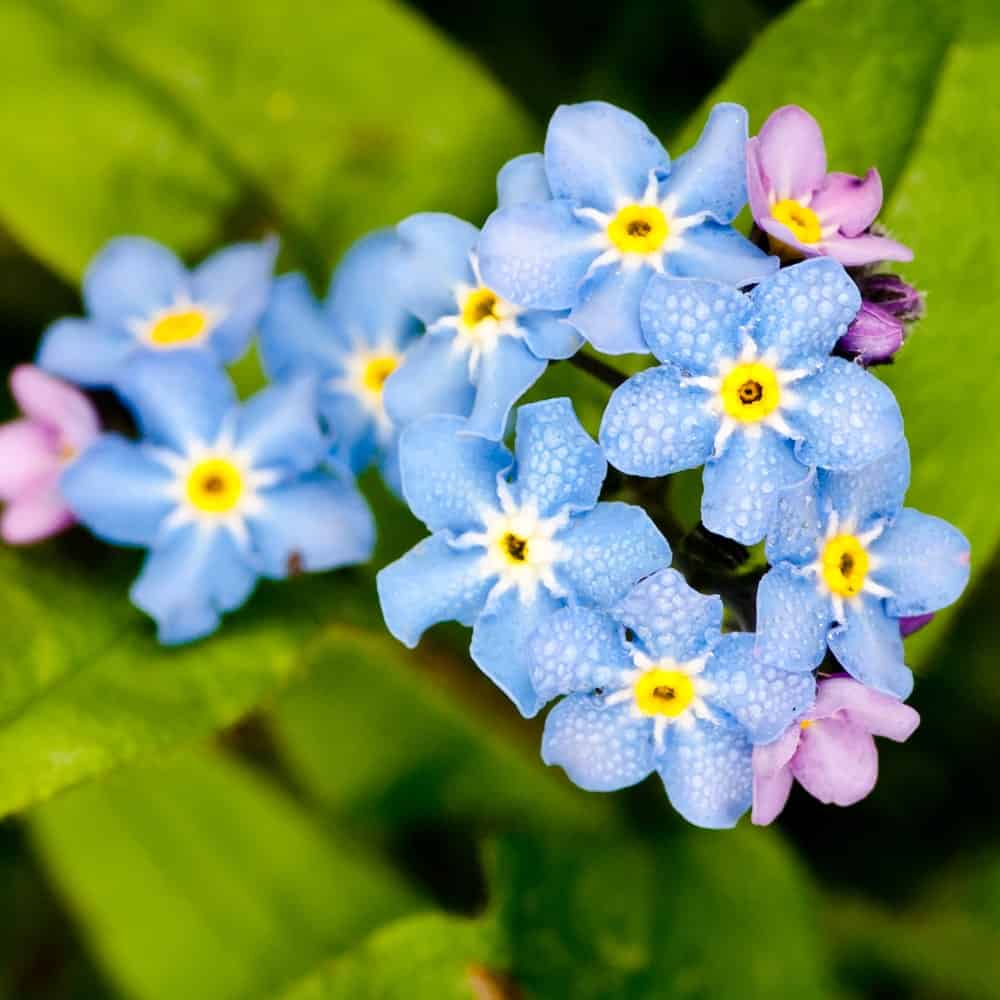 This is another herbaceous perennial Forget-Me-Not that is native to the stream-banks and moist meadows of Eurasia. It can also be found in several New England States and some wet areas of North America. The habitat of the Water Forget-Me-Not ranges from wetland margins, marshes, and shores of lakes or rivers.

This perennial wildflower grows to an average height of 6-10” and consists of a hairy, medium-colored stem. It prefers growing in wet to moist conditions and partial or full sun exposure. It also has a great ability to adapt to the ordinary garden soil, given that it is kept sufficiently moist and also contains clay-loam or simple loam.

The plant produces flowers that grow in clusters called racemes and are typically 2-10” long. Each flower consists of around 5 petals, and these petals or sepals are usually infused into a tube or cup. 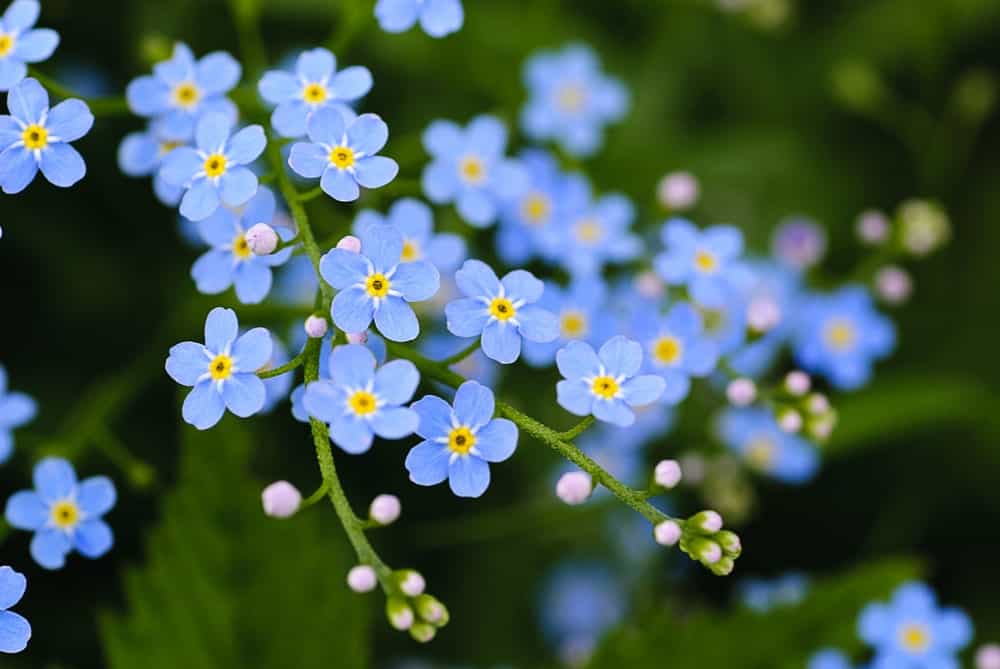 This variety of Forget-Me-Not plant belongs to the Borage family, particularly the Boraginaceae and is native to Asia and Europe. It has also been widely introduced to eastern and northern North America.

The Field Forget-Me-Not is usually biennial or annual, and sometimes a perennial herb. It grows to an average height of 4-16 inches which make about 10-40 centimeters. It produces corolla blue, funnel-shaped flowers that are usually fused and also 5-lobed. The leaves of this plant stalked basal leaves with stalks that are widely winged.

The success and popularity of this plant is believed to be based on its flexibility because its seeds have the ability to wait to sprout for a period of 30 years and then start germinating when the growing conditions become ideal and favorable. However, it is not so flexible in terms of the soil conditions and is usually spotted rocks surfaces, like in vegetable gardens. 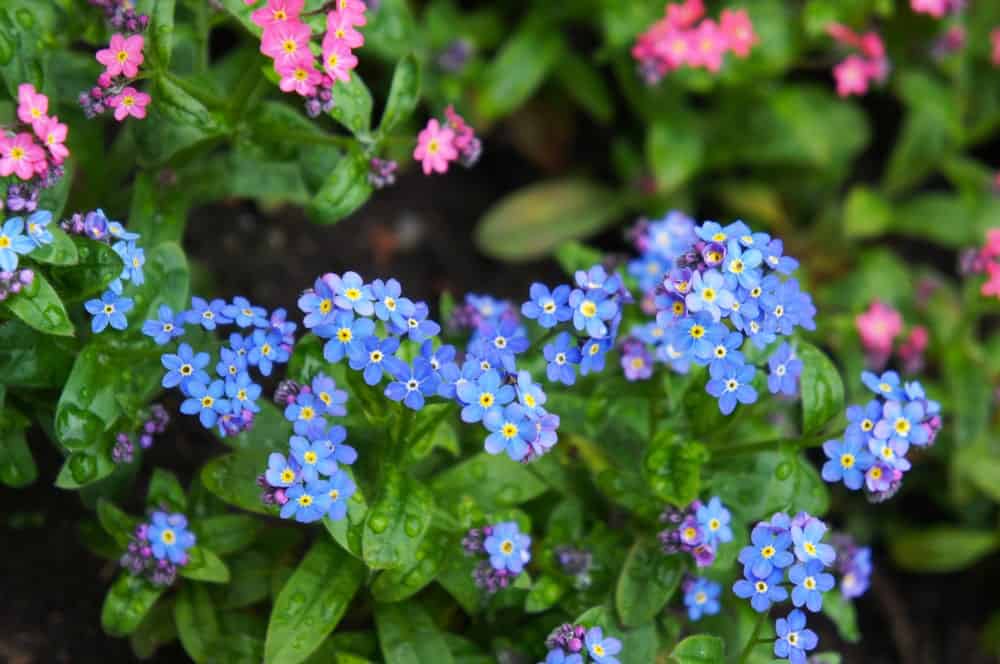 This plant is also known as ‘Scorpion Grass’ and belongs to the Boraginaceae family. It is typically found in Britain and mostly grows on meadows, damp woodlands, and basic rock formations.

The Alpine Forget-Me-Not is a type of a short-lived biennial or hardy biennial that produces leaves that take the form of a lance and beautiful bright, blue-colored flowers. They also often contain striking yellow centers. The flowering period for this plant begins during the spring season, all the way through the early summer season.

An interesting fact about this plant is that its flower is the state flower of Alaska and is also the county flower of Westmorland. It prefers growing under partial or full sunlight and grows to 0.2 m (0ft 8in) by 0.3 m (1ft). It ideally grows in well-drained soils that have light (sandy), heavy (clay) or medium (loamy) soils. 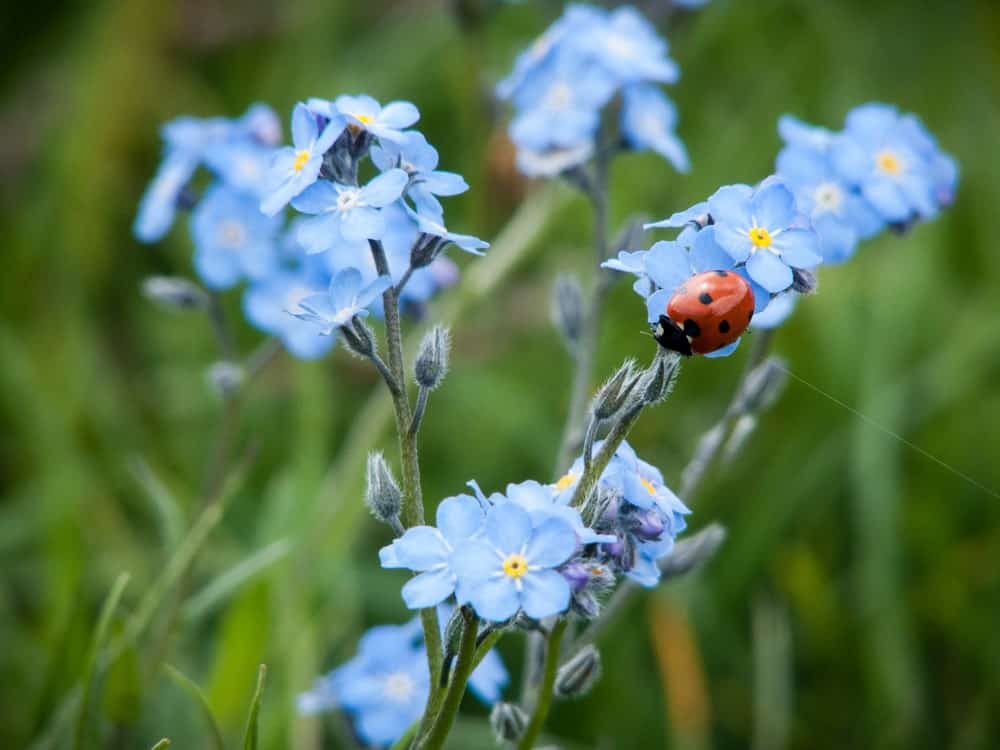 This variety is also known as ‘Blue Forget-Me-Not’ and is native to Eurasia, although it also has been widely introduced to New England and North America. It belongs to the Borage family, to the species Boraginaceae and is an annual herb that is taproot short.

The Strict Forget-Me-Not grows to an average height of 2-8 inches with an erect stem that is usually branched out from the base and has hooked hairs at the surface. The flowers of this plant are rectangular, 1-2 mm wide with light blue corolla and are usually funnel-shaped.

This plant is familiar to most people and holds quite a reputation for being a symbol of friendship and love. It is also of the earliest blooming plants in the entire Forget-Me-Not family and is typically found on rocky outcrops. The habitat of this plant ranges from sandy soils to dry and disturbed fields. 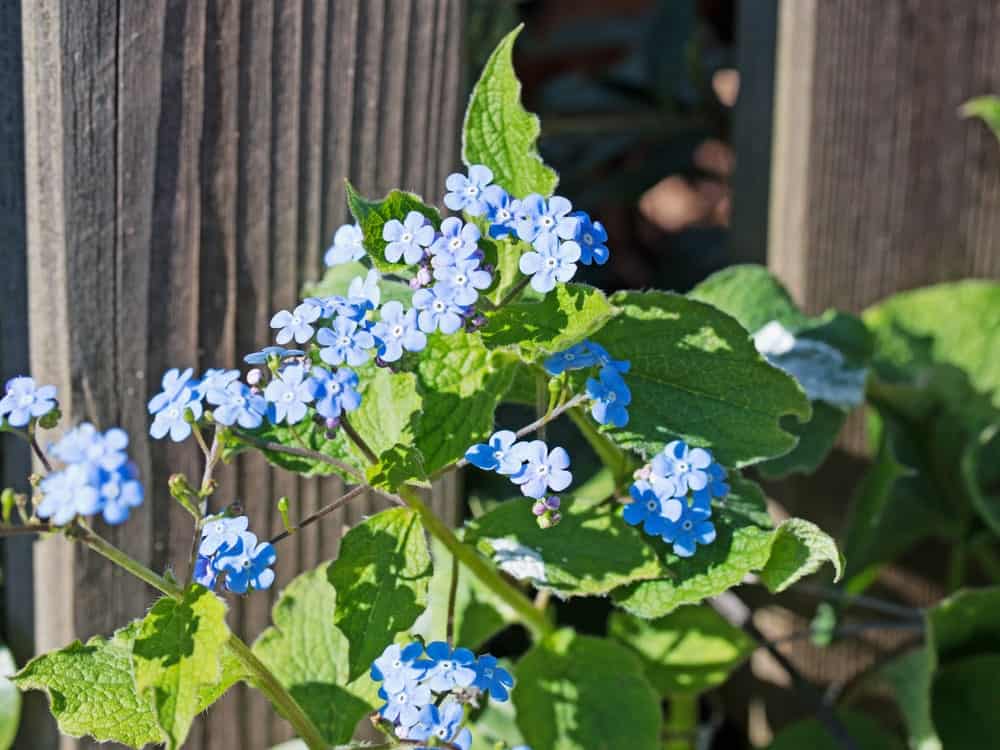 This is a slender and medium-sized, slightly hairy plant that only grows to an average height of 2 to 5 cm tall. It typically grows in dry and open habitats and its flowering period begins in April and ends by June. It is believed to have originated from Britain, particularly in the extreme north region.

The Early Forget-Me-Not belongs to the Boraginaceae family species and is an annual herb, typically with a short and dark brown main root. In Southern Finland, this plant bursts out into blue floral sprays, particularly during the spring season on hilly fields and rocky outcrops.

While the flowers on their own are only a few millimeters in diameter, but when they grow in massive varieties, they can turn the whole landscape a beautiful blue color.

The leaves of this plant are basal leaves, usually in a rosette or lanceolate stem, with un-stalked and oblong-shaped leaves. 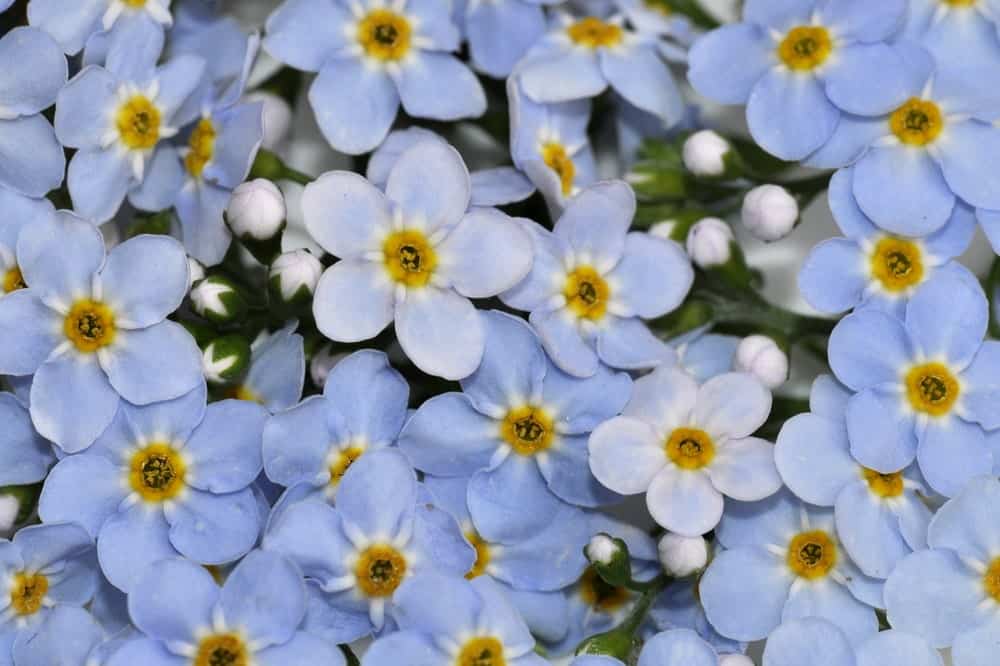 This species of the Forget-ME-Not plant is also known by several other common names including ‘Bay Forget-Me-Not’ and. Small Flower Forget-Me-Not’. It is mainly found in the northern parts of the entire Northern Hemisphere and prefers to grow in several types of habitats including wet and moist soils.

The Tufted Forget-Me-Not plant is typically native to the pond, stream banks and also several seepages in North America. Its habitat is commonly described as aquatic and terrestrial, mostly comprising of wetlands.

This plant produces gorgeous flowers that sport a variety of flowers ranging from red, purple, blue and red. The leaves of this plant are usually simple, often lobed and un-lobed, but are never separated into leaflets. The flowers also typically grow in clusters called racemes that are tightly curled at the tip of the flowers. The clusters open up gradually, in a successive manner, as the tips of the flowers elongate and unfurl. 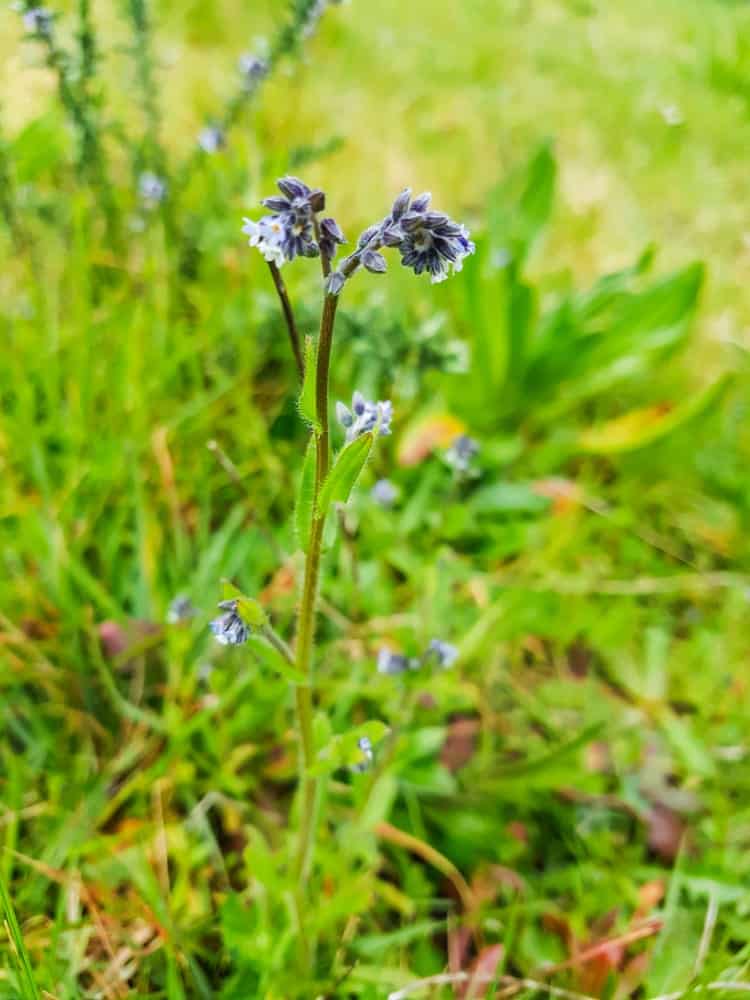 This Forge-Me-Not variety is native to Europe and has also been introduced to western and eastern North America. It ideally grows in a variety of habitats, most commonly in disturbed areas like roadsides.

The Changing Forget-Me-Not is a perennial or annual growing herb that typically reaches a height of 10-50 centimeters. It often produces a tall and slender, erect system that may be branched out sometimes. It produces leaves that may adopt a variety of shapes including oblong and lance-shaped, and they are normally 4 centimeters long while being just a centimeter wide. The leaves are often coated with soft, small and straight hairs.

The flowers produced by this plant are initially a gorgeous yellow or cream, color after which they gradually turn to a pretty shade of pink, and finally a striking blue. This is primarily why it is called the “changing” Forget-Me-Not since it is always changing colors as it reaches the maturity stage. Its flowers are also often arranged in a series of tiny coiled or curved at the top of the stem. 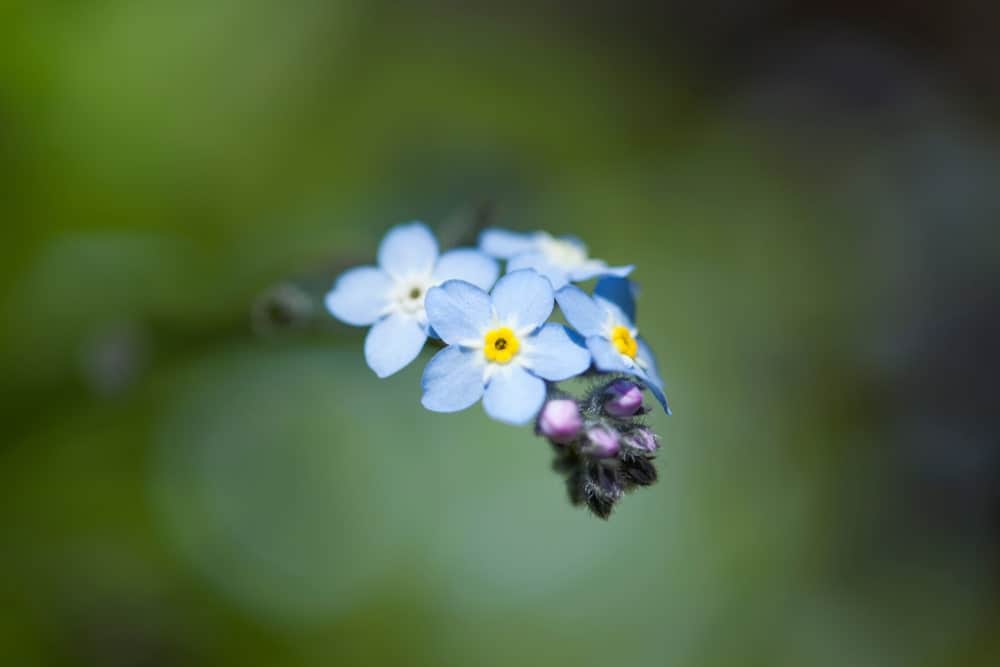 This species of the Forget-Me-Not plant is native to northwestern Africa and has also been introduced to the west coast of the United States. In the United States, it is popularly found along the Pacific coastline of north and central California. It belongs to the genus Myosotis which comes under the family of Boraginaceae.

The Broadleaf Forget-Me-Not usually produces leaves that are oval in shape, and they are apparently the largest in size at the woody base of the plant’s stem. The plant easily grows in several types of habitats including disturbed areas, moist soils, and shaded areas.

The flowers of this plant sport a tubular shape and often appear in flat pink colors or sometimes contains a blue color up reaching a centimeter wide. The stems have a woody base with a layer of rough, white hairs. The inflorescence of this plant initially appears in an elongated cluster that is very compact in the start, but then gradually starts to open and become loose throughout the growing season. 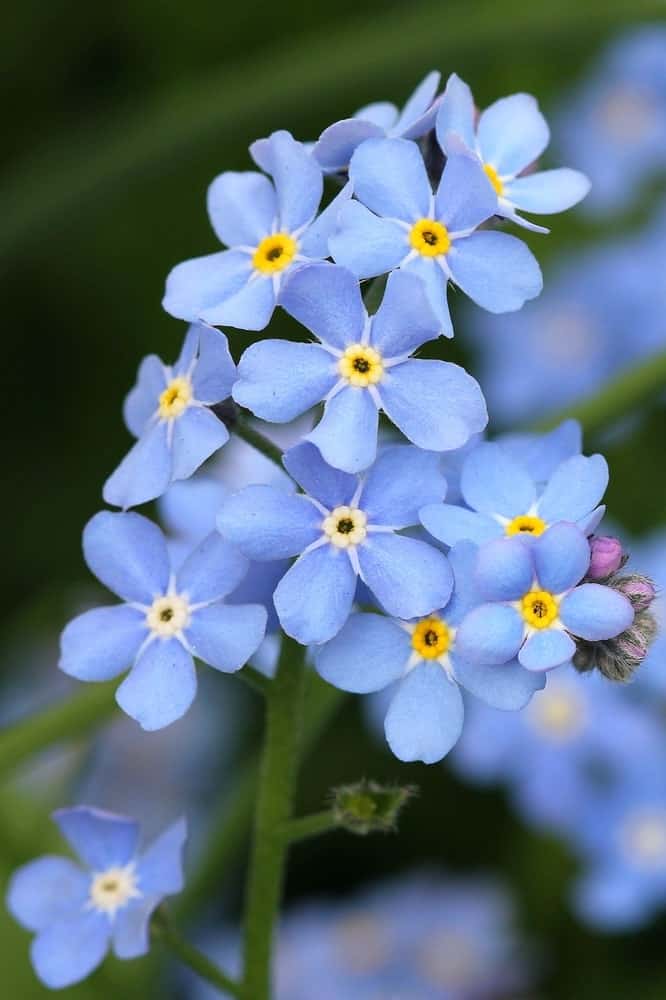 This type of Forget-Me-Not is a plant species of the genus called Myosotis that is a member of the Borage family, specifically the Boraginaceae. It is a perennial herb that grows to an average height of 15-40 cm, that is, 6-16 inches. The stem of this plant is usually described as ‘ascending-erect’ that is often branched and consists of hair-spreading flush at its surface.

The Lapland Forget-Me-Not plant grows in Northern Finland, and some of its widely favored habitats include stream banks, broad-leaved forests, birch woodlands, and springs. One thing that is common among all these habitats is that they are wet, tangled thickets that are nearly impassable.

The flowering period for this plant ranges from July to August during which it produces wheel-shaped flowers that contain a corolla sapphire and a funnel-shaped mouth with protuberances.

Return to all flowers.